Today is a day of celebration! Alli hit a big milestone today, but we'll get to that in a bit. 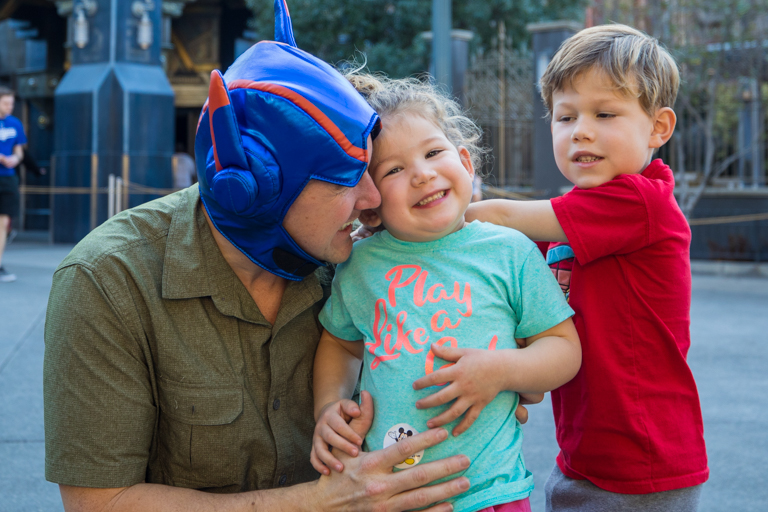 Meeting the Little Mermaid at the El Capitan Theater

Happy Friday! Today we've got a special treat planned! We're headed to Hollywood to the El Capitan Theater to watch The Little Mermaid! 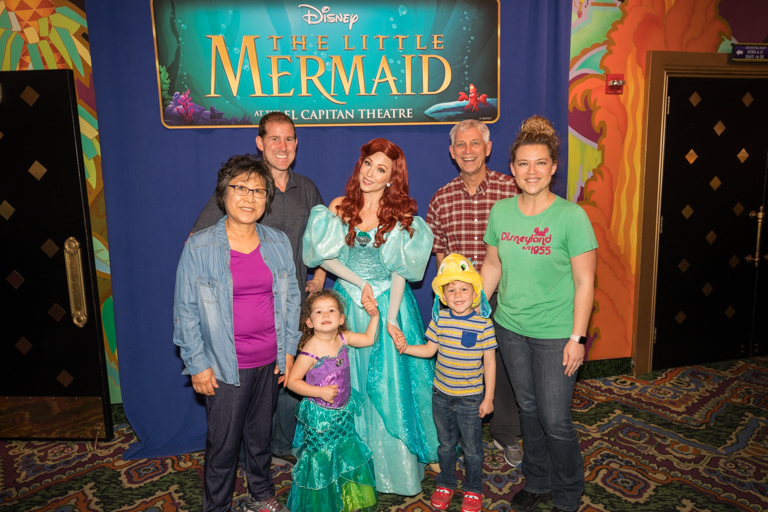 It's time for another Eclipse! We're kind of on a space kick right now with our visit to the Observatory yesterday.

The Solar Eclipse back in 2017 was absolutely amazing. I was really glad we made such an effort to go see it.
This year, there is a complete Lunar Eclipse and we can see it right from our porch! 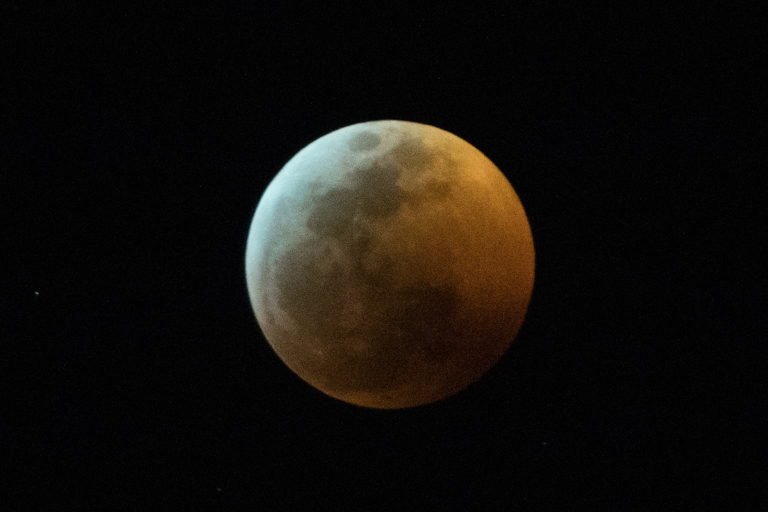 After spending a fun morning at the Los Angeles Zoo, since we're in the area, one of the places we've really been wanting to take Ian is the Griffith Observatory. This boy loves his planets and all things space. I know they both had a lot of fun at the zoo, but I suspect they'll like the Observatory even more. 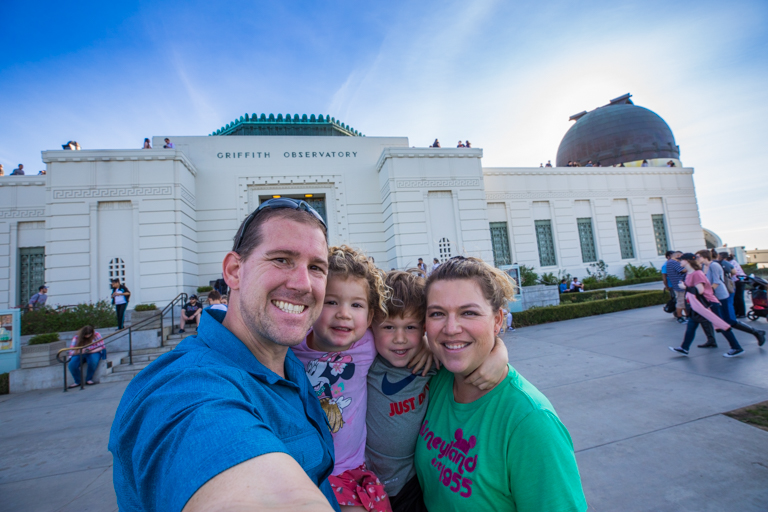 Spending the morning at the Los Angeles Zoo

It's the weekend and we're going to Disneyla... Wait! What's this? Someplace new?
That's right. We're visiting a different part of LA today. To start, let's check out the Los Angeles Zoo! 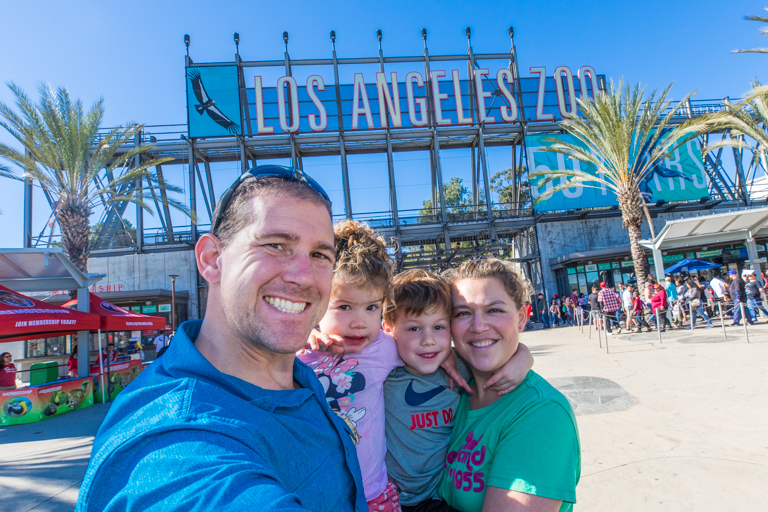 We're on a roll with new treats to sample. Today a friend dropped off a surprise for me. It's Carrot Cake Hershey Kisses! Could they possibly be as good as the Carrot Cake Oreos? We'll see.
Dinner was spaghetti so that's why the kids both have orange mouths. 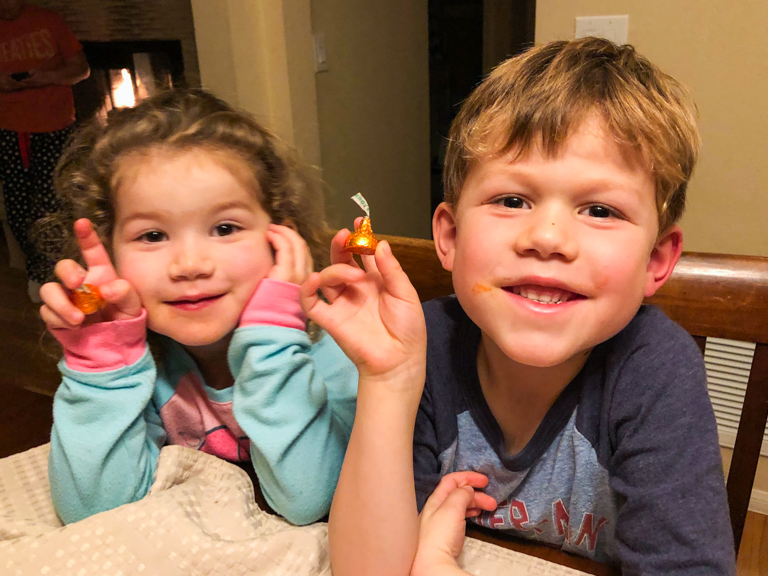 Happy New Year! The kids have been saying how it's been a while since we've been to Disneyland. I suppose that's true. It's been nearly a month since our last visit was back on December 16th before all the Christmas madness.
For the past year I've tried to have a theme for the hats we wear each week. I'm going to try to continue that this year as well. My Disney hat collection still have a few more that haven't been seen.
This week's theme is hats from the Asia Disney parks. Back in October, we made it out to Tokyo Disneyland, Hong Kong Disneyland, and Shanghai Disneyland. It was an awesome trip and I need to hurry up and get my write-up started.
Ian and I are wearing fez hats from Mystic Manor at Hong Kong Disneyland. Alli is wearing an adorable pink pom-pom hat she picked out herself from Tokyo Disneyland. And Theresa is wearing a beret from Shanghai Disneyland. 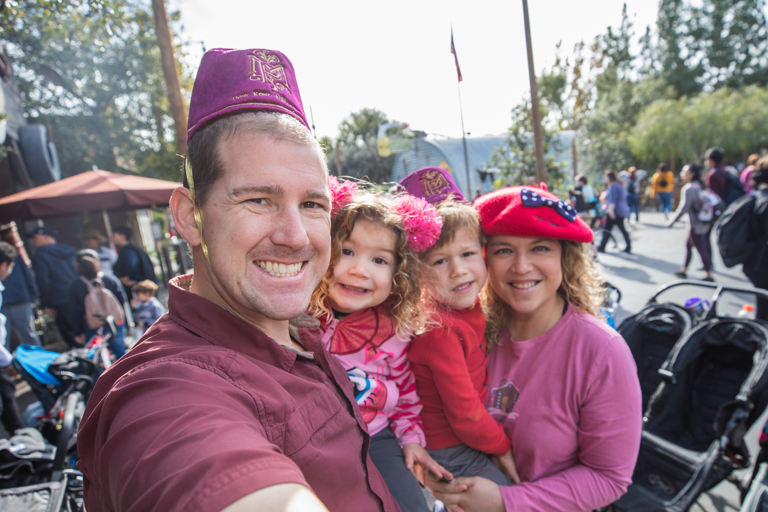 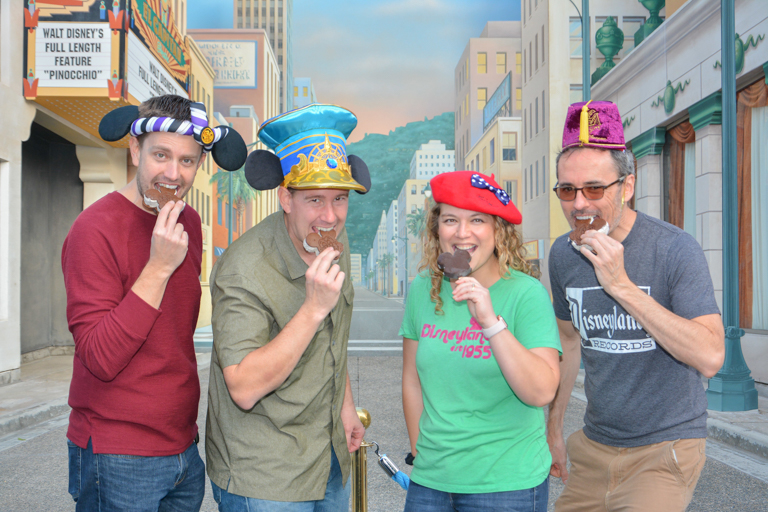 By request, here's the special messages that were sewn into Ian and Alli's Christmas quilts.

I love the inspirational sayings. 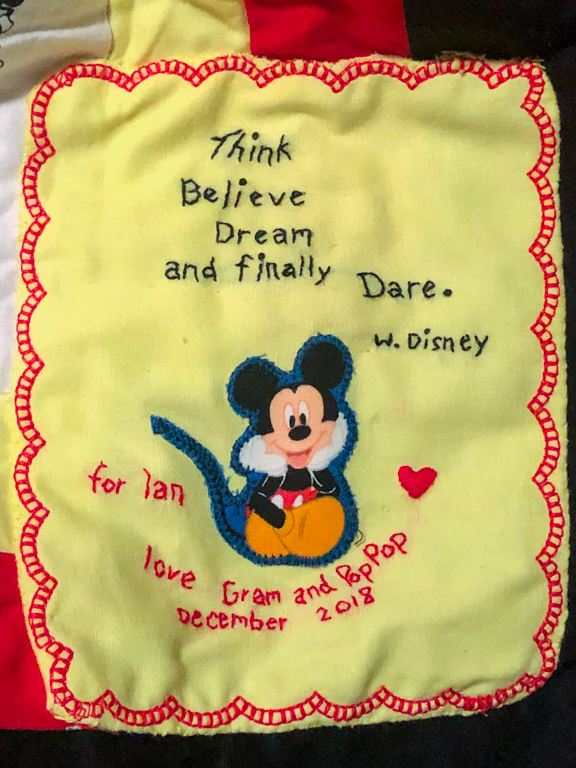 I bet we sing the Imagination song from Figment at least once a week at bedtime. 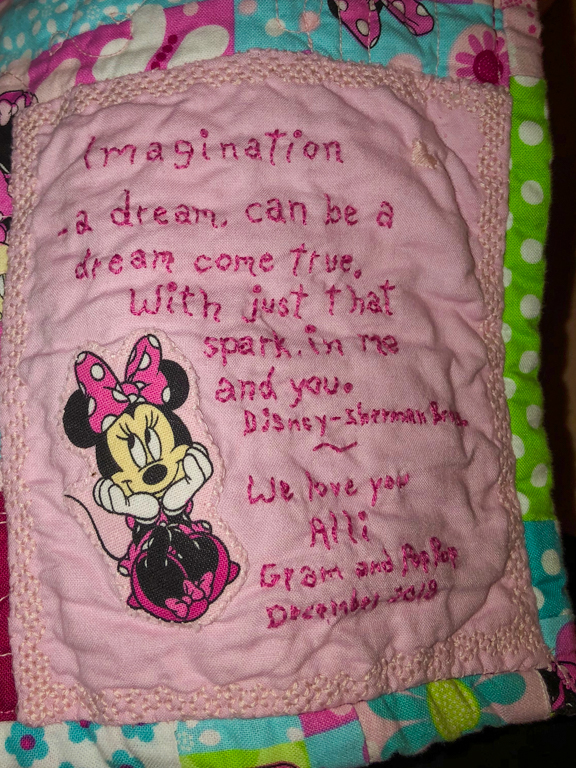 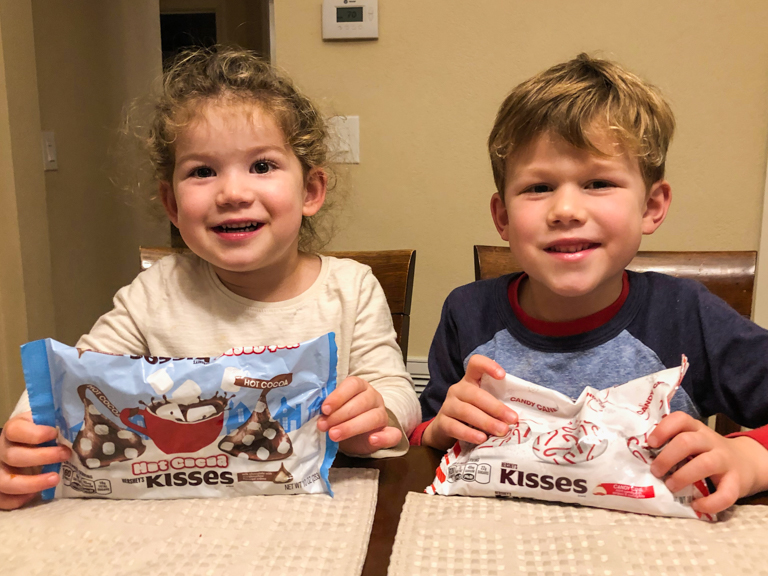 Next up in the product review, Peeps Delights!
Peeps aren't just for Easter anymore and that makes me happy. I love Peeps!
Today we've got two different flavors. And because they're "Delights" they're dipped in something extra. There's Hot Chocolate Peeps dipped in White Fudge, and Peppermint Bark Peeps dipped in Dark Chocolate. 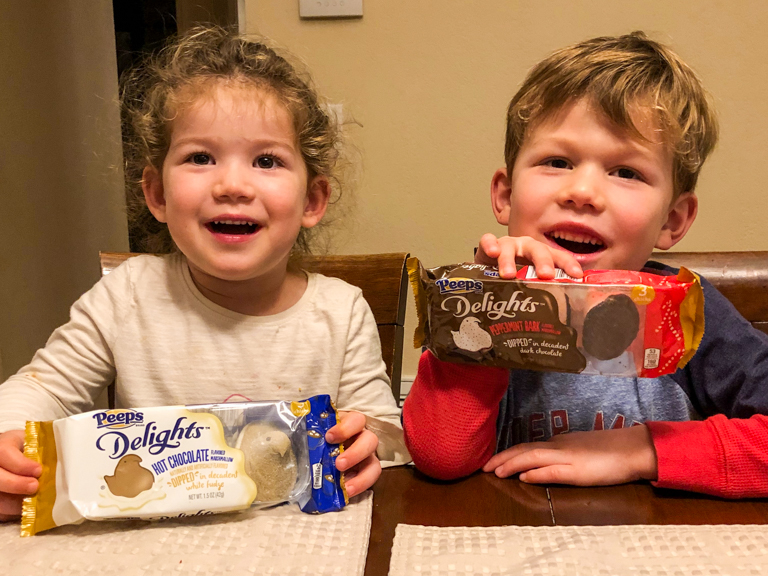 It's been a little while since we've had some product taste tests. Get ready for a few in a row!
What's it been, 2 months since Oreo released a new flavor? Mickey's Birthday Oreos around November 18th?
Time for 2 more new flavors. A Dark Chocolate Oreo flavor and Carrot Cake Oreos.
You'd think at this point they'd be used to looking at the camera and smiling. We're still working on it though. Eyes tend to wander and smiles look fake until I tell them to laugh. Smile kids. Smile kids! 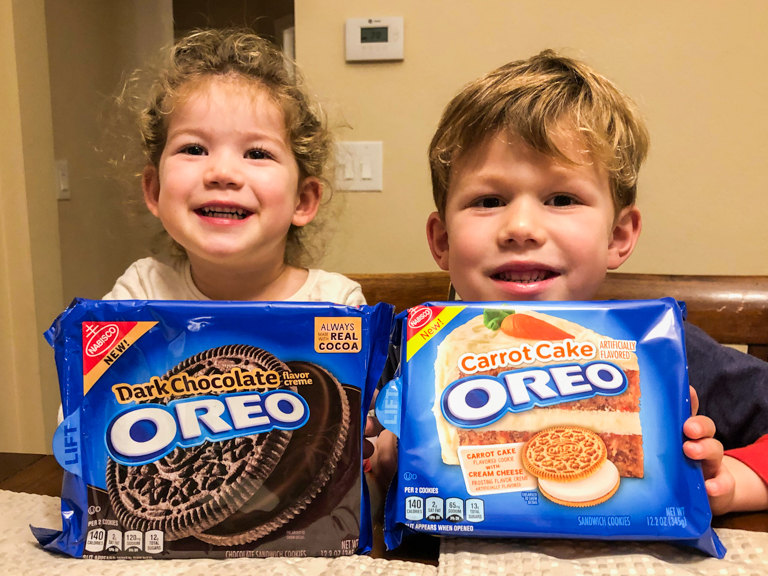 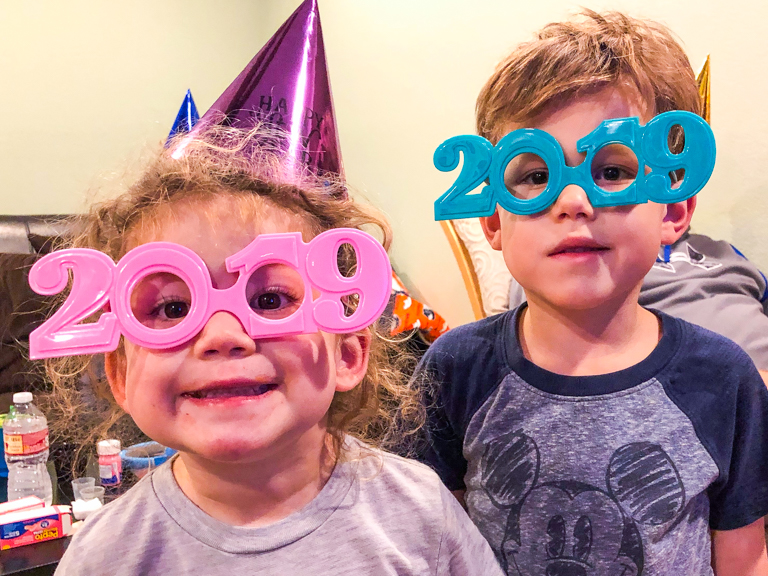