Only one more day to explore Yosemite Valley. Let's jump into it, shall we? 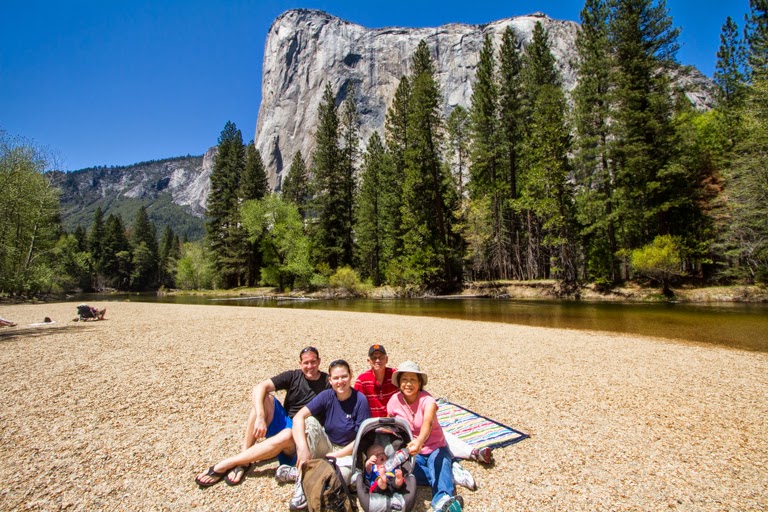 The day started with breakfast at the house. Someone is happy and ready to attack the day. 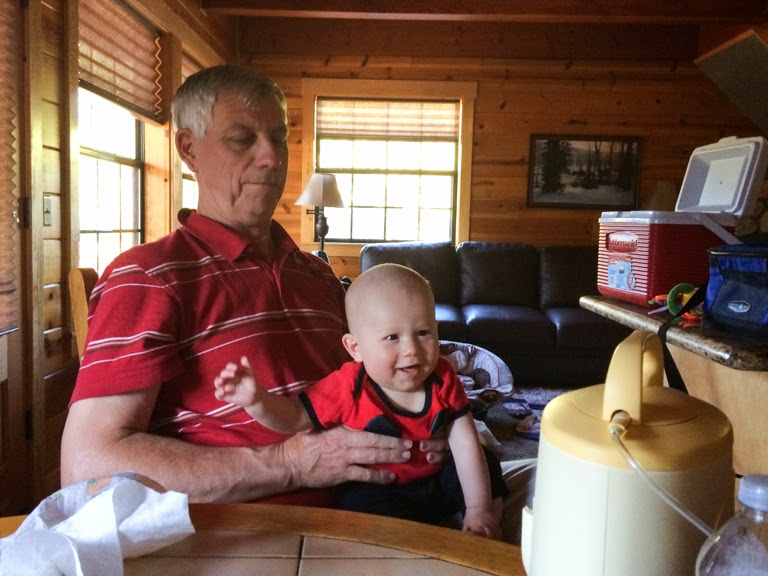 We left Foresta and drove down highway 120 into Yosemite Valley. 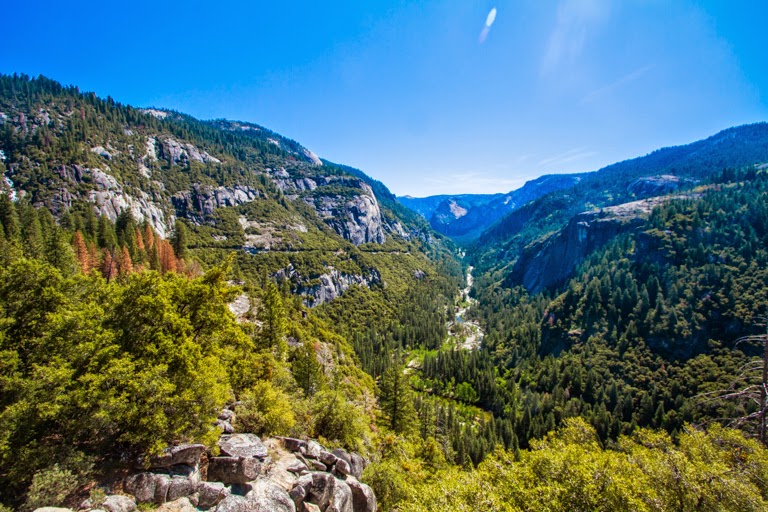 Well unfortunately Cascade Falls didn't photograph very well from far away. That's too bad too. Theresa said out of all the waterfalls here in the park, this one was her favorite. It has "character" and isn't just falling straight down. 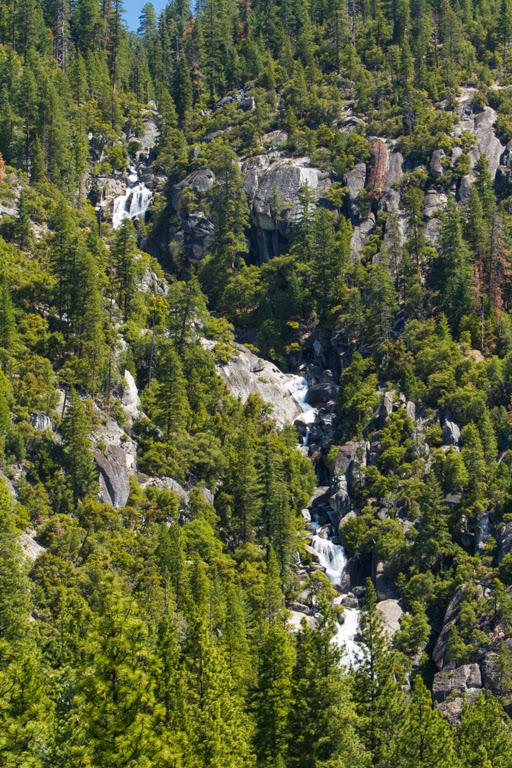 Taking a closer look as some of the "character". 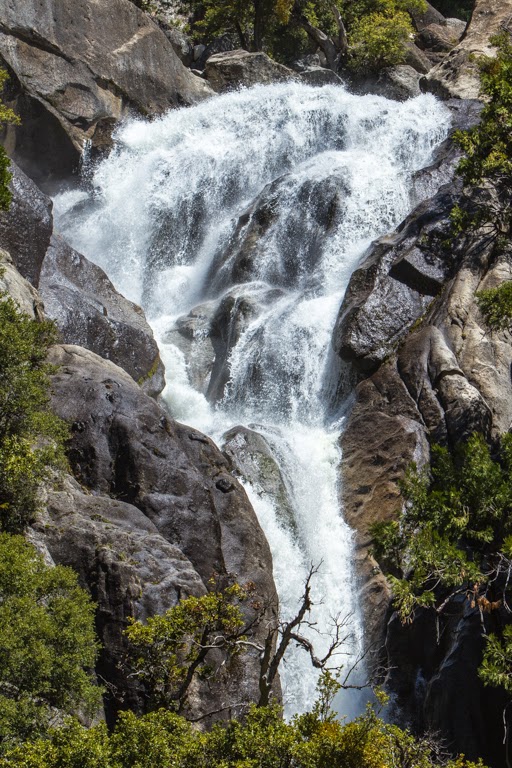 Driving just a little further, there is a small pull-off where you can get a little closer to the falls. 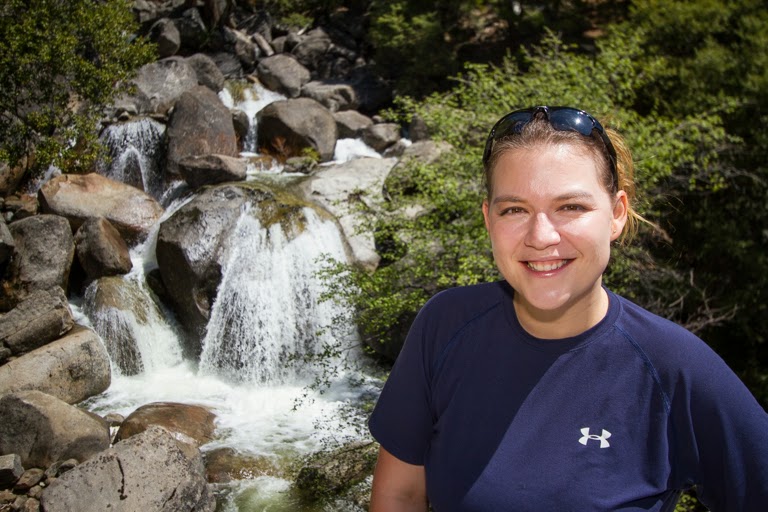 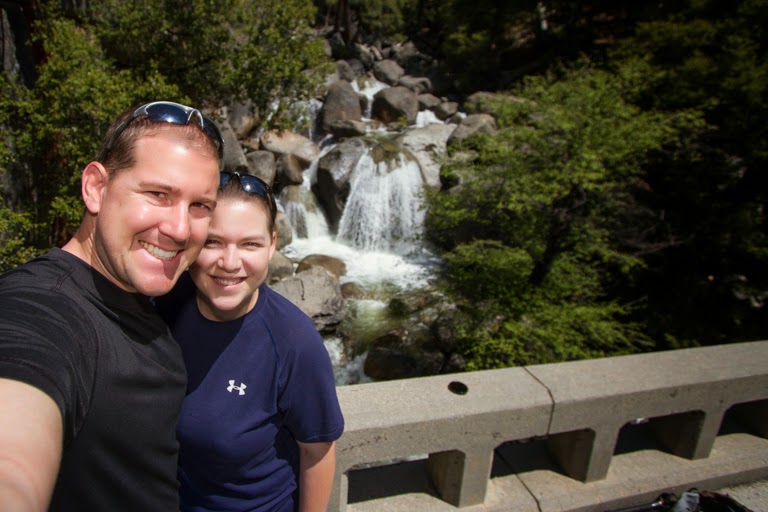 We actually spent a little bit of time getting ready and looking at Cascade Falls. By the time we reached the valley, it was time for lunch. Today we chose the Sentinel Beach picnic area. It has a nice shaded spot with tables to eat at. 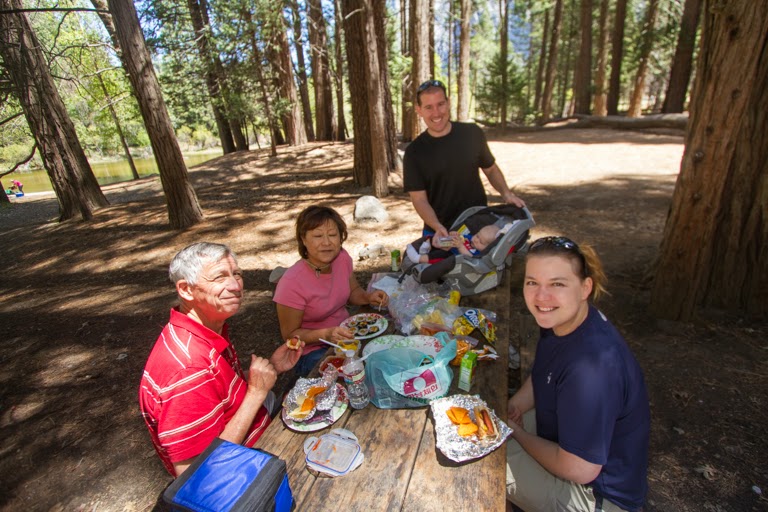 And close by is a pebble beach by the Merced River.

The Merced River is very cold because it's coming from snow melt. Hmm. Let's see how Ian likes to dip his toes in it. 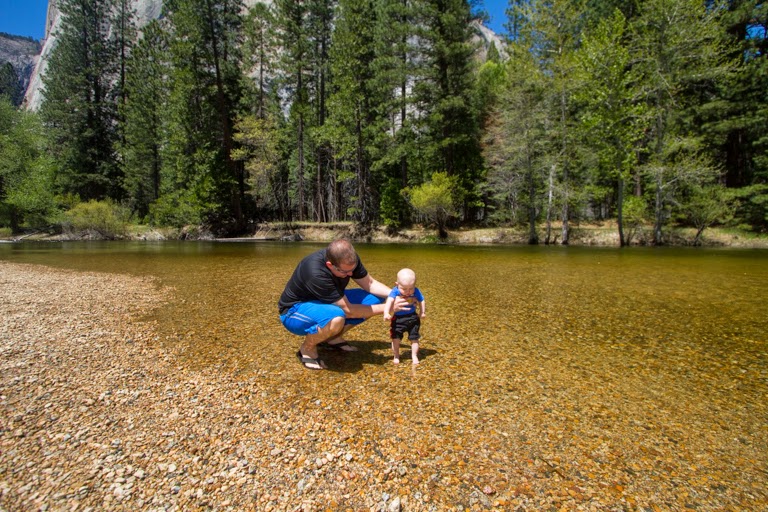 Not surprisingly, he didn't really care for it.

Standing in front of El Capitan. 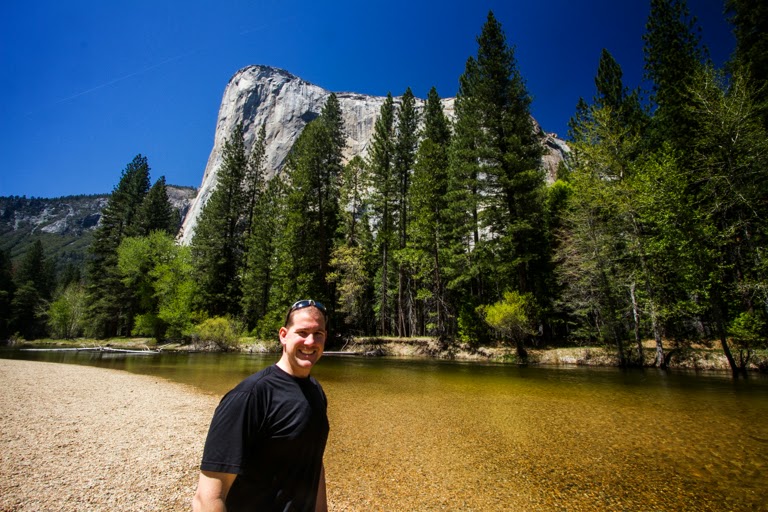 Grandpa and Ian are taking a stroll along the beach. 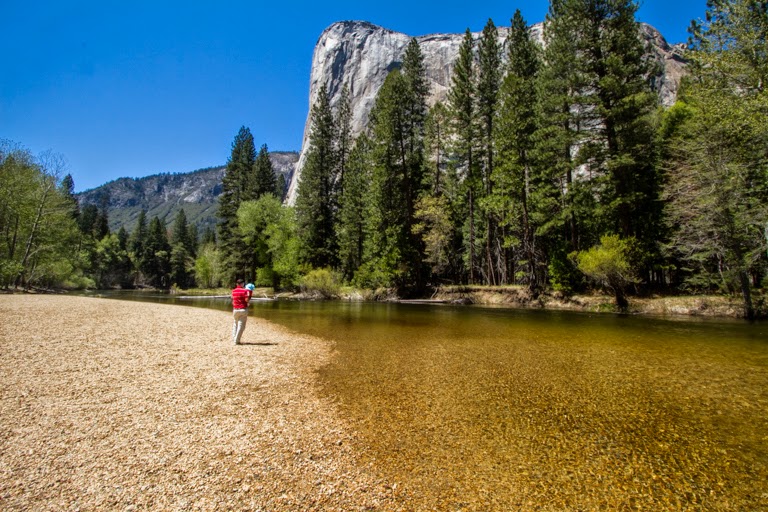 He loves his Grandpa. 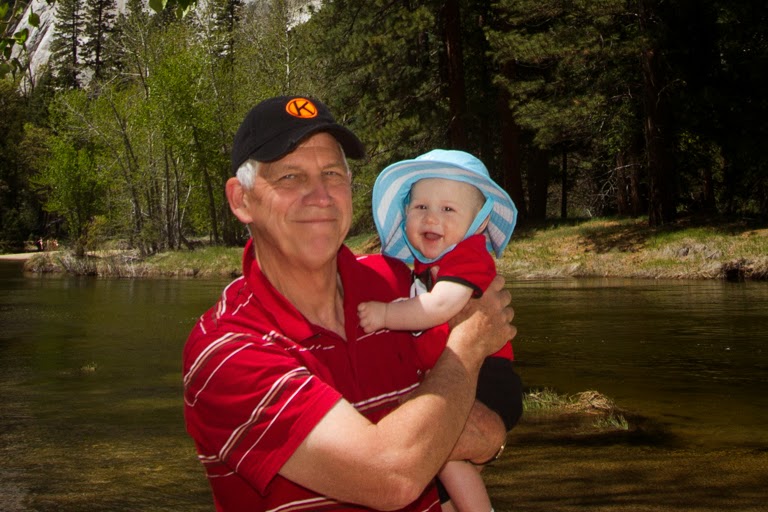 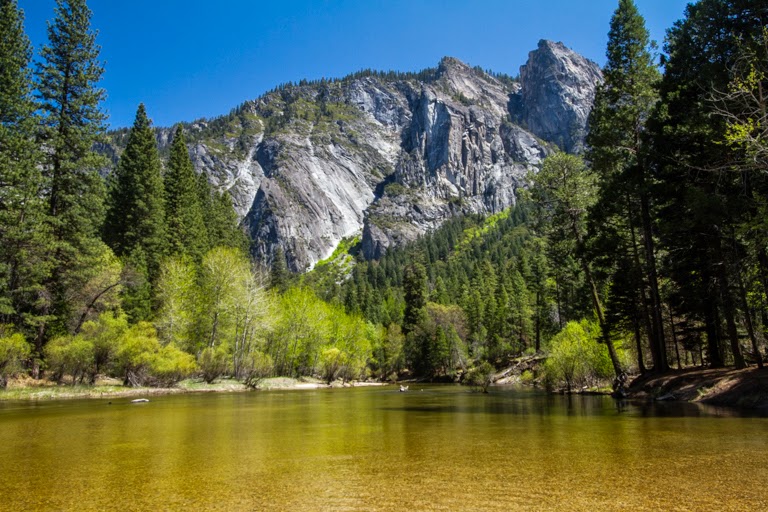 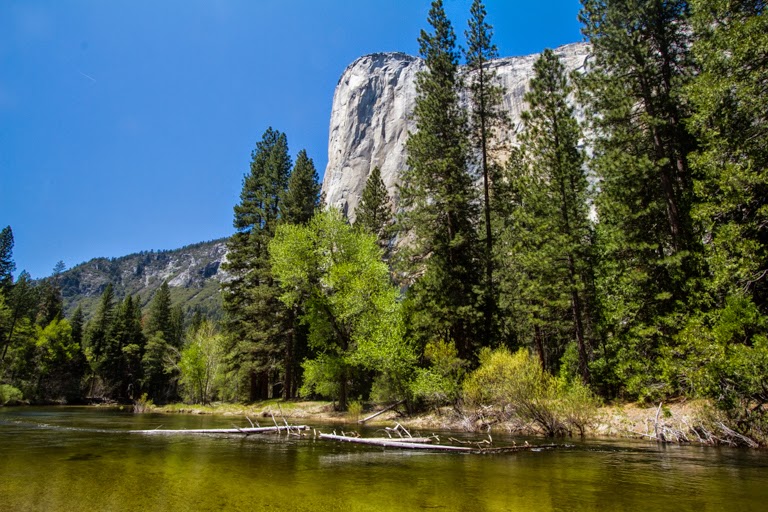 Just a quick family photo in front of El Capitan. 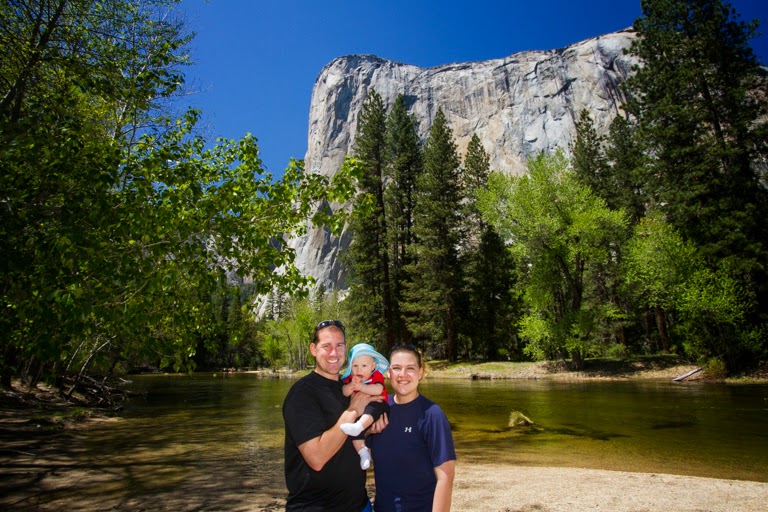 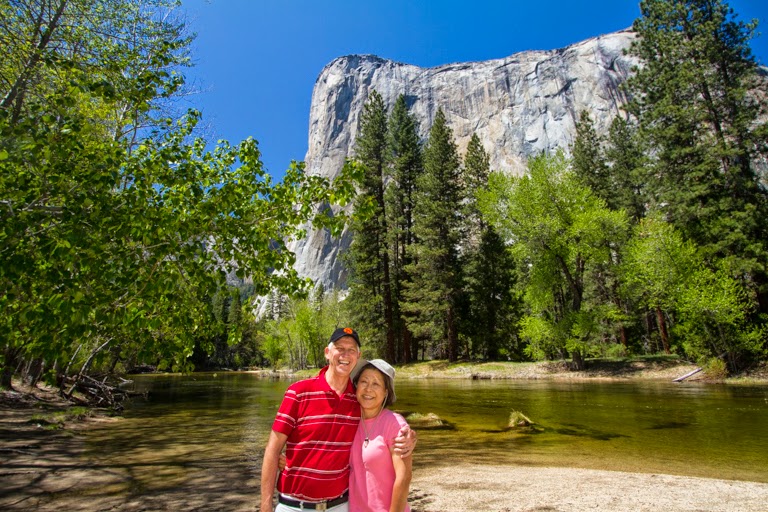 After circling the valley, we came to our last stop of the day. Yes, it was actually a pretty short day. Just a quick 0.5 mile hike on a paved trail is Bridalveil Falls. 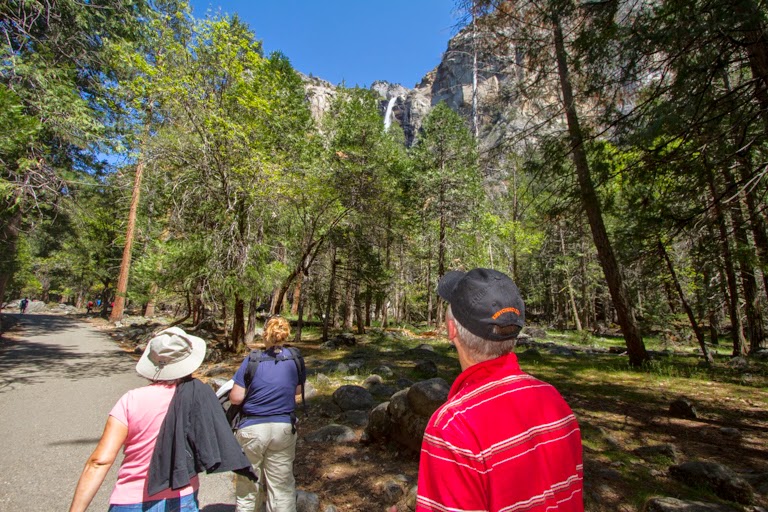 It was an easy hike and once you got to the bottom of the falls, you could really feel the spray. 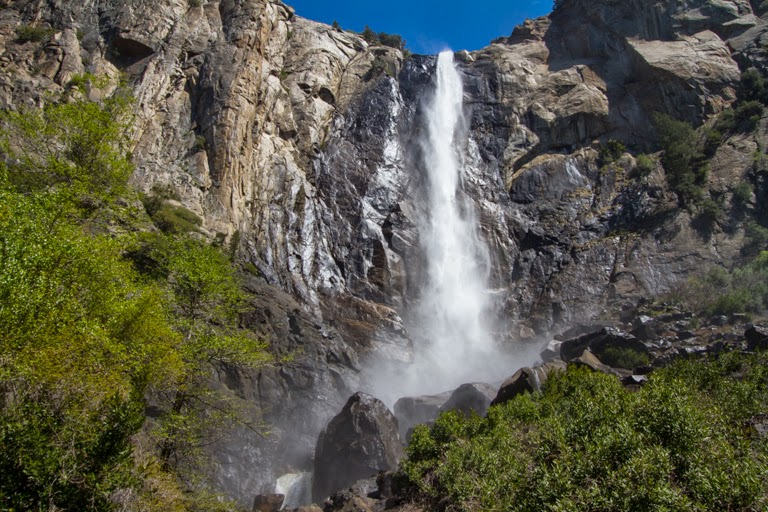 There isn't a very large spot to stop near the base. After getting there, we had maybe 2-3 minutes with only a couple other groups there, until a couple buses worth or tourists showed up. 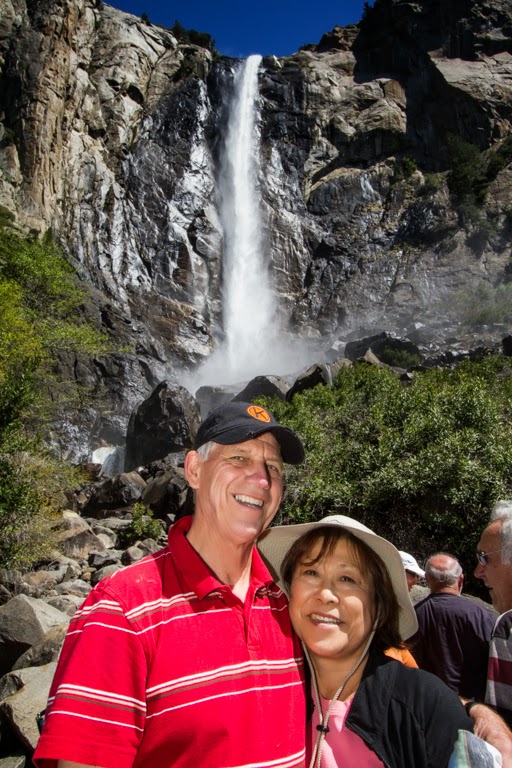 After that it got crowded. Ian was happy in his carrier though. 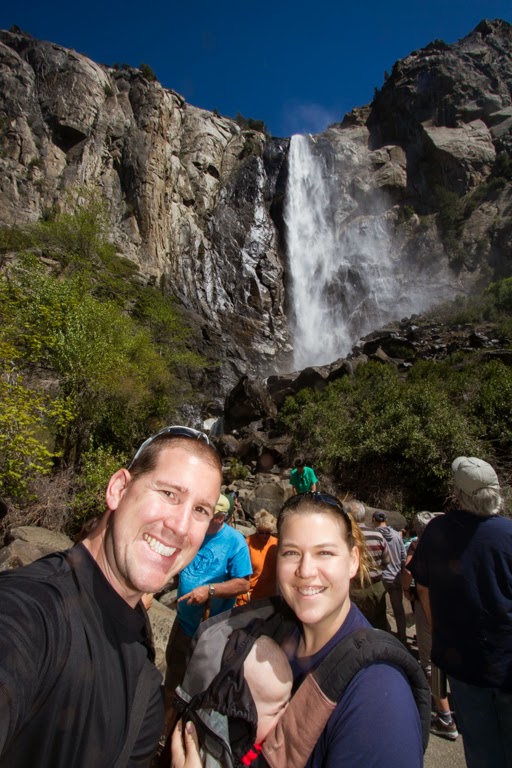 After seeing Bridalveil Falls, we decided that our last day of the trip was going to be a relaxing one. Chi was fixing a roast for dinner and that needed some time to cook, so we headed back to the cabin.

One of the items the owners of the Owl Moon cabin said shouldn't be missed is nearby Foresta Falls. Still part of Yosemite Valley, Foresta Falls is a rarely visited waterfall only 1.5 miles from the cabin. After traveling there ourselves, we can see why. The dirt road is full of embedded rocks jutting out everywhere. I was concerned a few times that we'd scrape the bottom of the car on a big rock. Also, the road is barely wide enough for one car and there are hardly any turnouts. I'm so glad we didn't encounter any other cars going the opposite way, because one of us would have had to drive in reverse for at least a quarter mile. 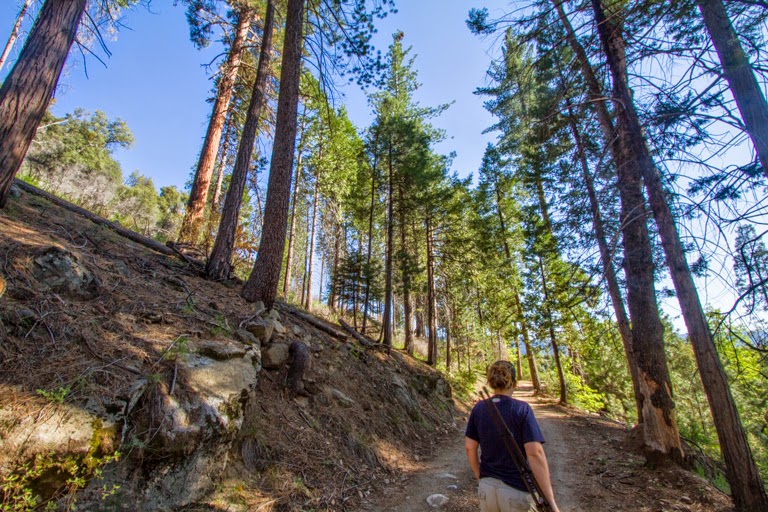 After a bit of a crazy drive, we found the beautiful Foresta Falls. 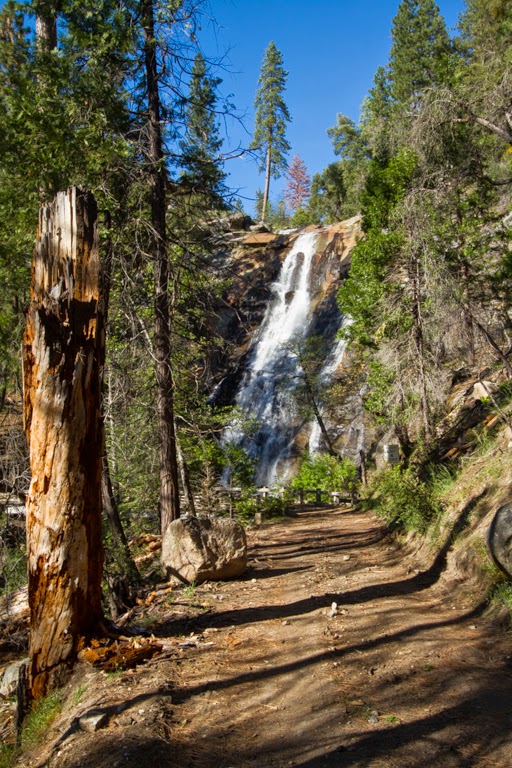 Foresta Falls is topped by a 40 foot falls and continues under the bridge with a few smaller falls. 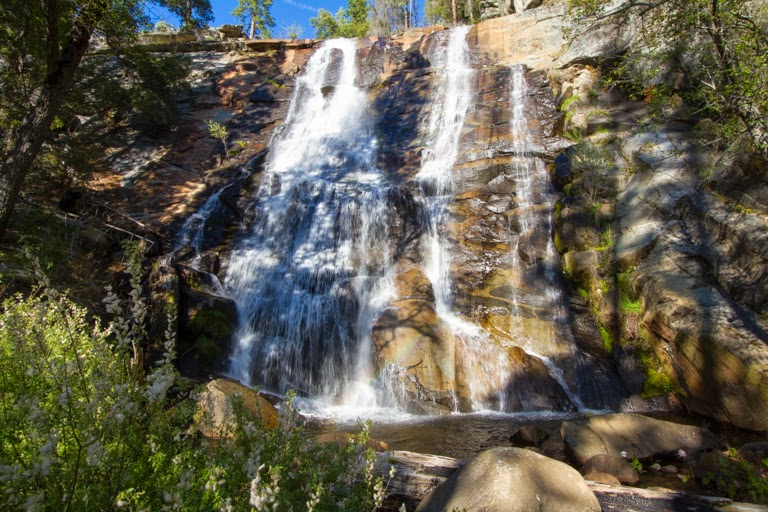 We came at the perfect time of day. Check out the rainbow at the bottom! A short video of the falls.

It was a great trip to Yosemite! We would have loved to stay longer. Tomorrow we'll be taking the 6 hour drive back to Los Angeles. 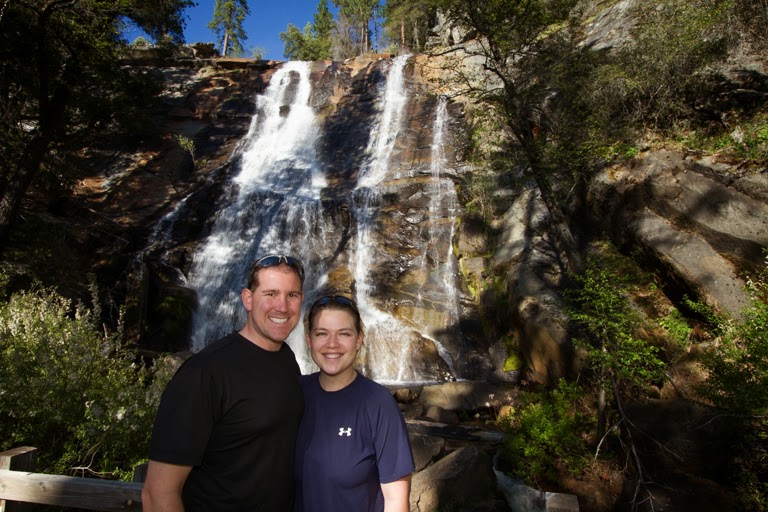 I've only got one more night for taking shots of star trails. The whole time, I've been looking for something interesting I can put in the foreground while facing north. Why north? Well the one star in the sky that is constant is Polaris, the North Star. If you take a time lapse facing that direction, all the other stars appear to circle it. Cool! 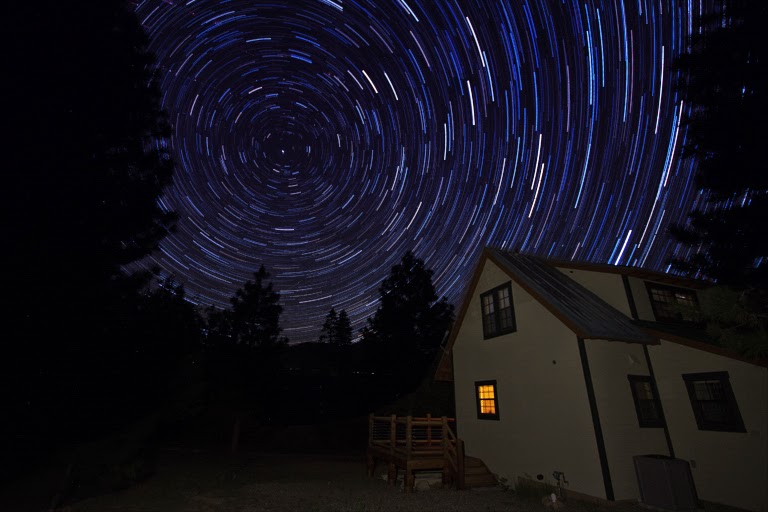 We had a great time in Yosemite. Seeing the waterfalls was amazing. Now Theresa's wondering how beautiful Yosemite is when snow covers the ground... We'll see how soon that happens...
Posted by Joe at 10:08 PM