After our guided tour of the valley we were all hungry and it was time to eat lunch. 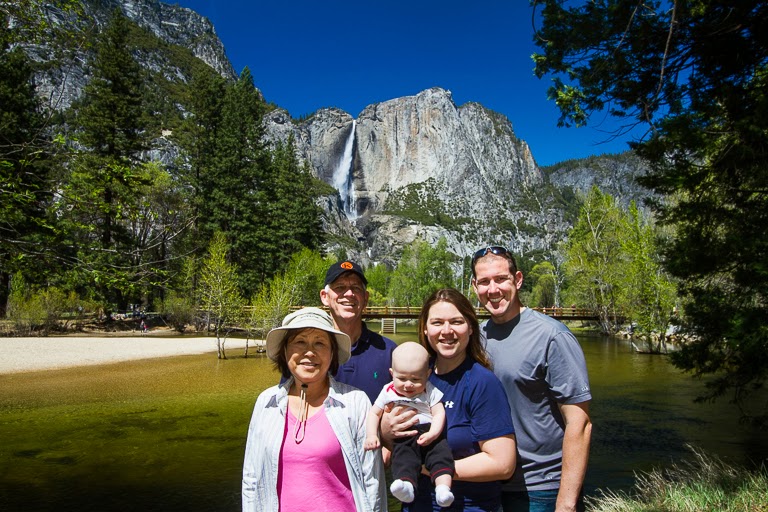 There's so many beautiful places we could have gone to picnic and today we chose the Swinging Bridge picnic area. On our entire trip, this was the only place we had to wait for a parking spot. It was lunchtime and it's a beautiful location so I totally understand. After 5 minutes, a spot opened up. 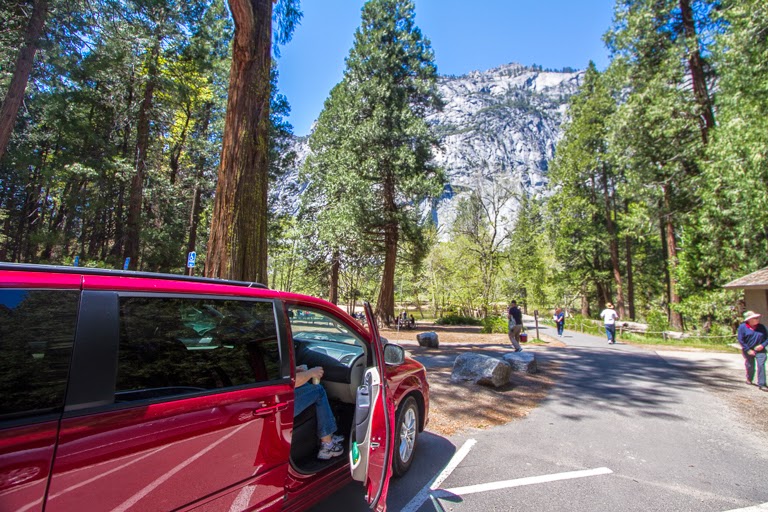 What a beautiful view. The bridge no longer swings, but you can see the upper portion of Yosemite Falls in the background. 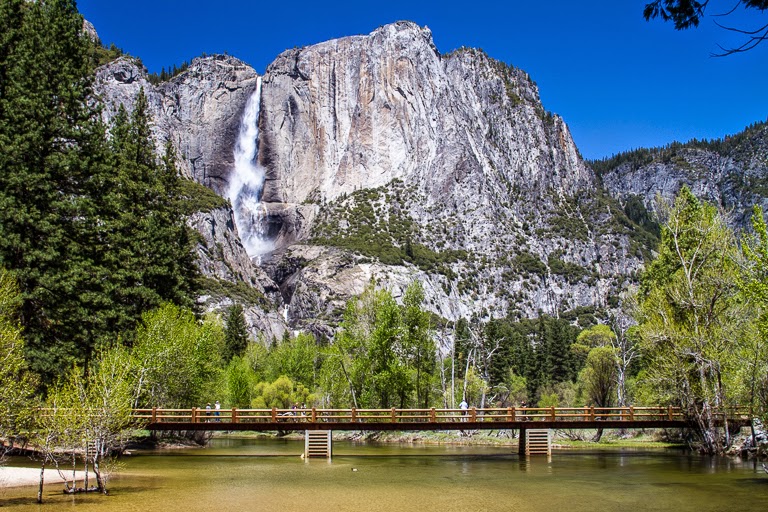 We easily found a picnic table near the water in the shade. Ian always eats first. 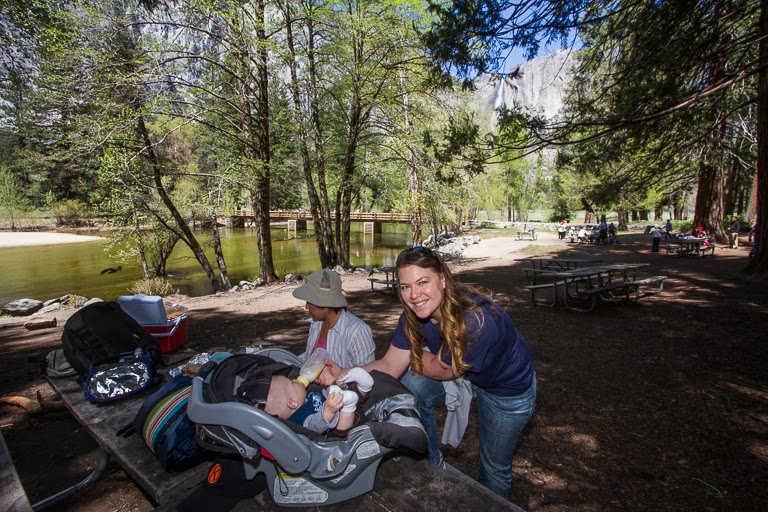 There were various creatures wandering around looking for handouts. Spare some bread? 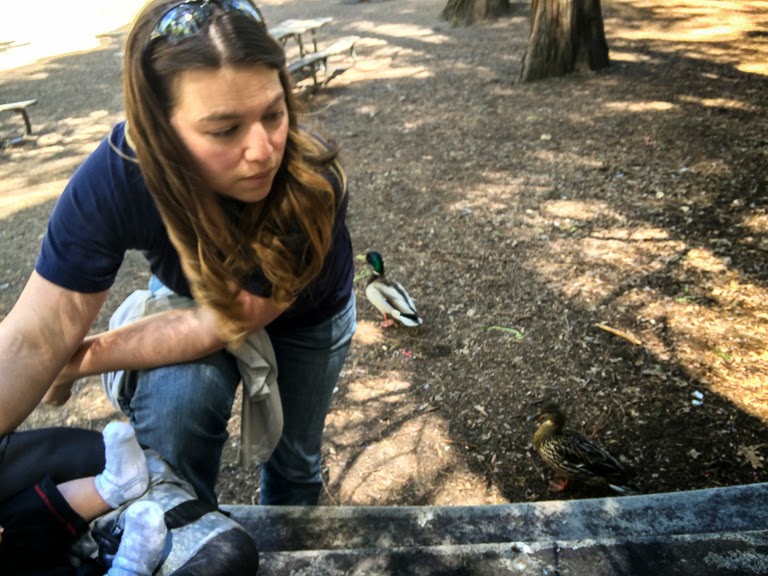 The crows were also pretty bold. 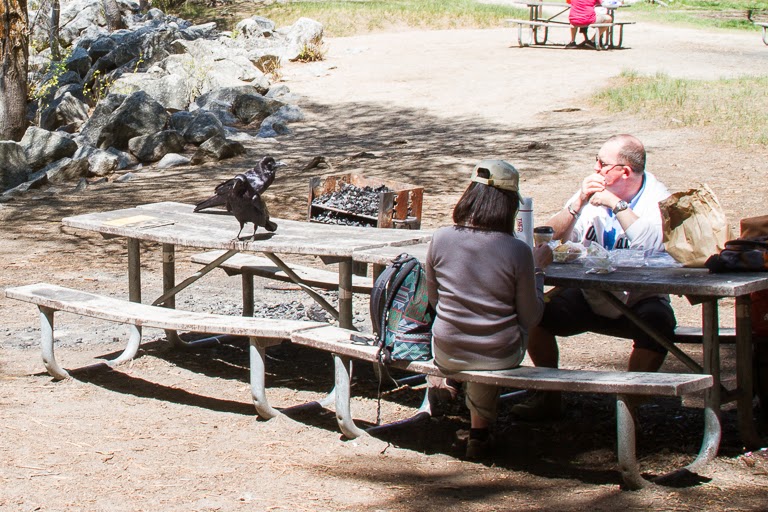 After lunch, we tossed the blanket on the ground and let Ian roll around and stretch out a bit. He's been great in his car seat. 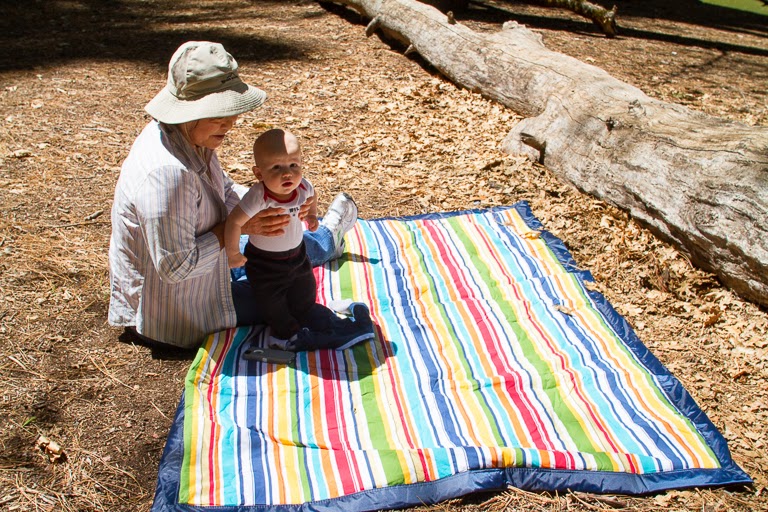 Family photo in front of the Merced River and Yosemite Falls. 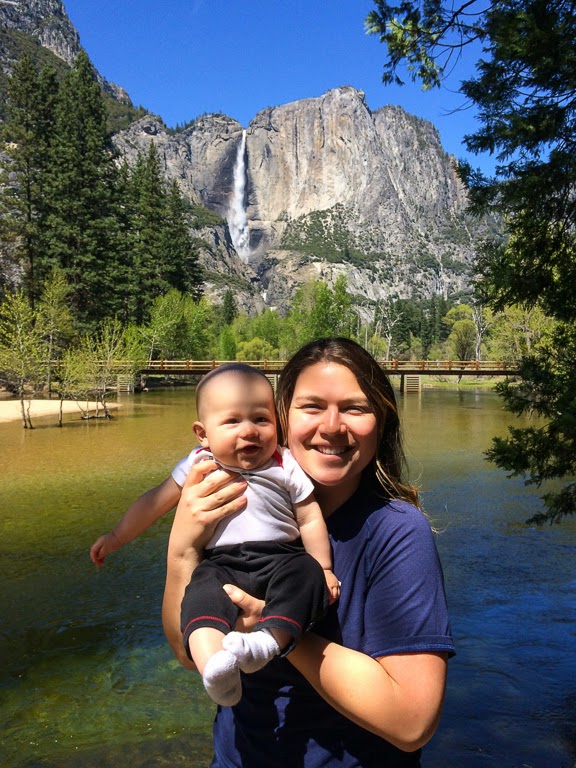 There it is. Yosemite Falls. The highest measured waterfall in North America and the sixth highest waterfall in the world. A total of 2425 ft consisting of three drops, with the longest being Upper Yosemite Falls at 1430 ft. So glad we came while the waterfalls were flowing. 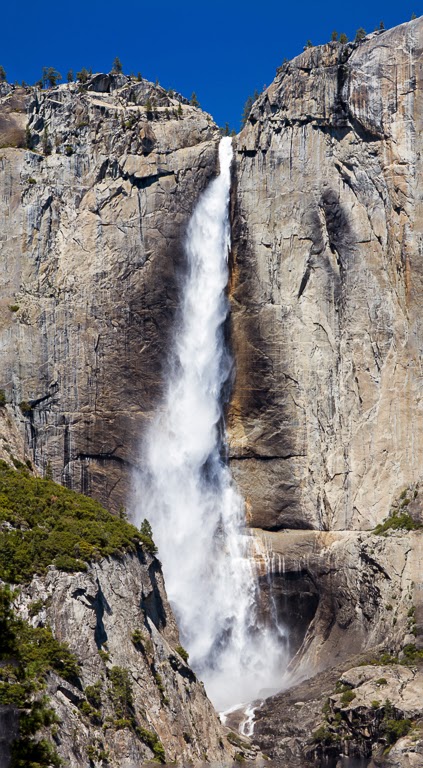 After lunch we continued our tour of the park on our own. Stopping by a field to look at Half Dome. 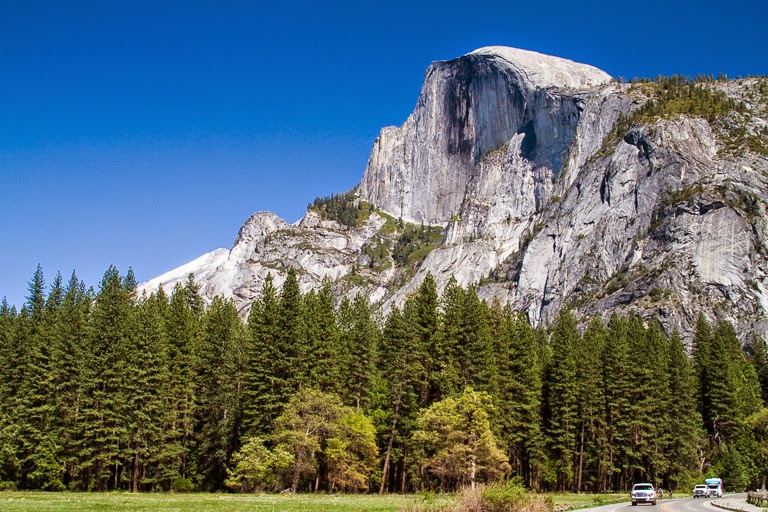 North Dome is directly opposite Half Dome. 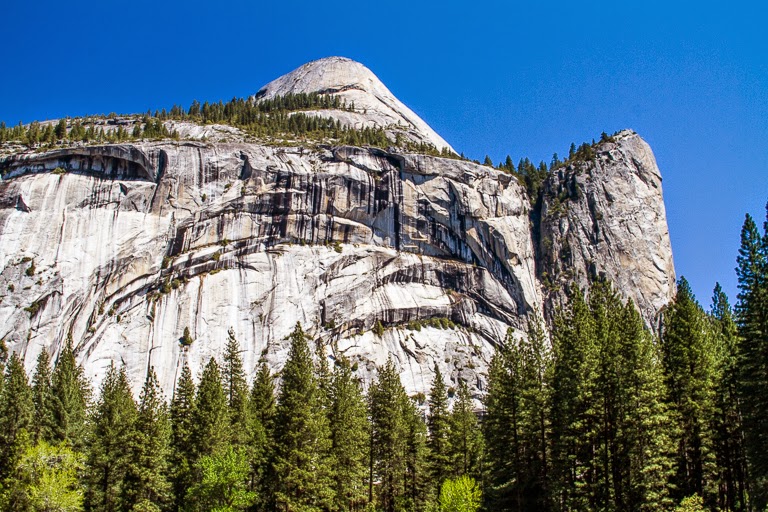 There's our photographer. I don't think we see him enough in photos. 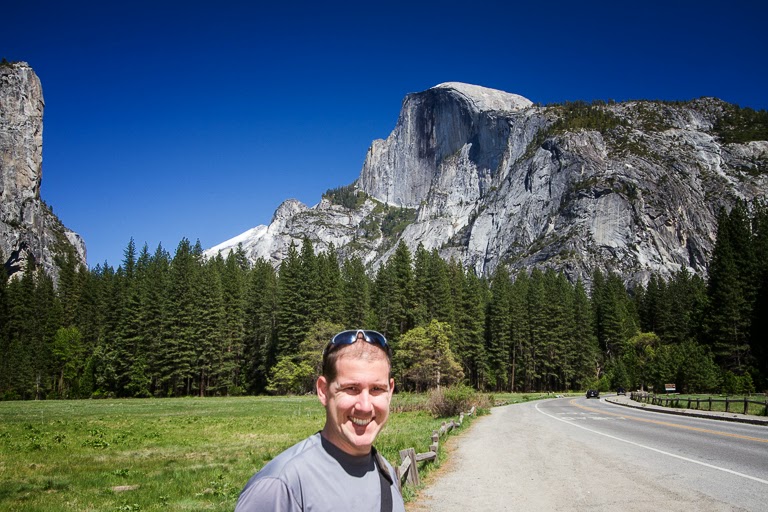 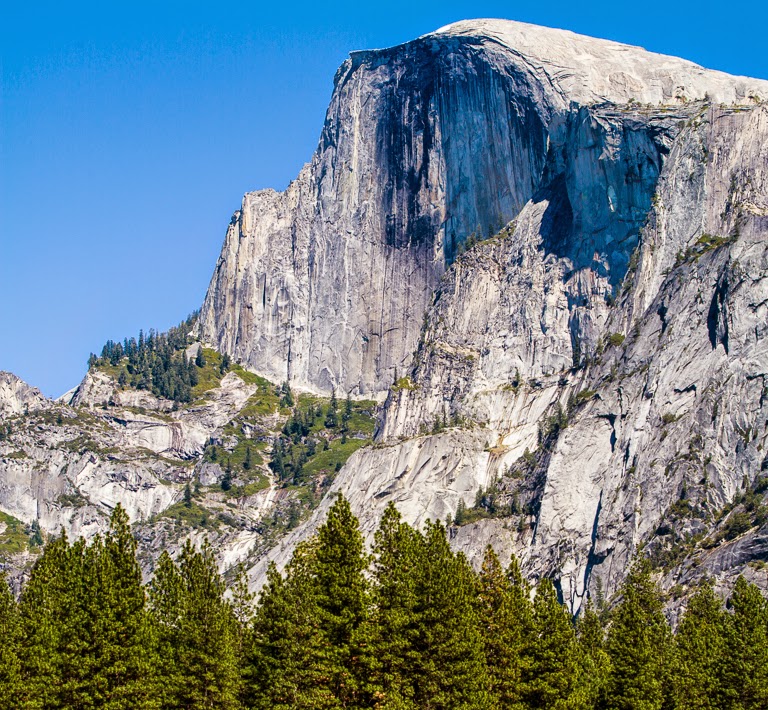 Last on our list today is Yosemite Falls. Parking was easy again at the Yosemite Lodge and it was just a short 1/4 mile hike to the base. This beautiful view is just a couple hundred yards into the hike. 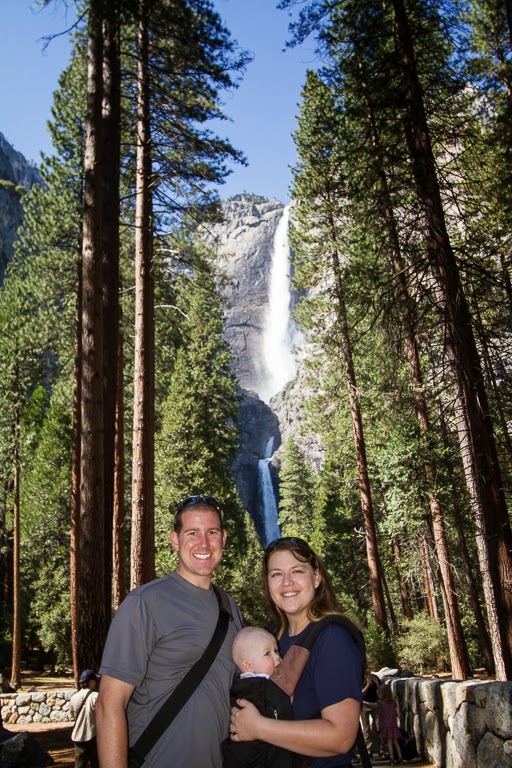 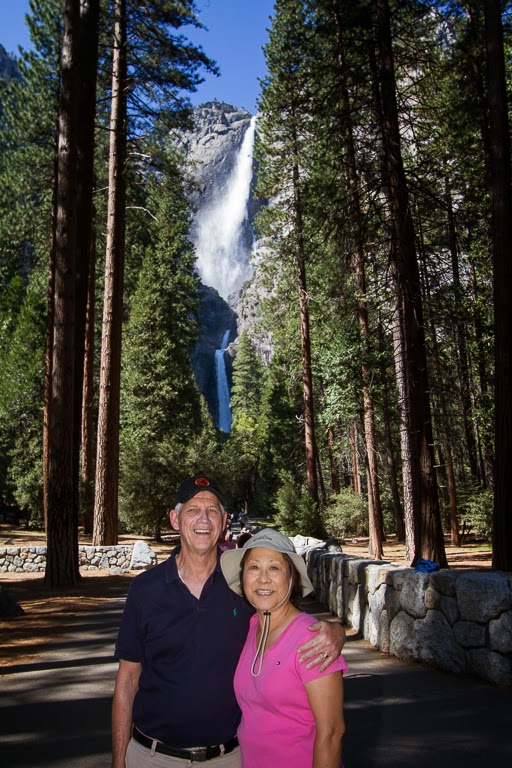 Someone peeking out from his carrier. 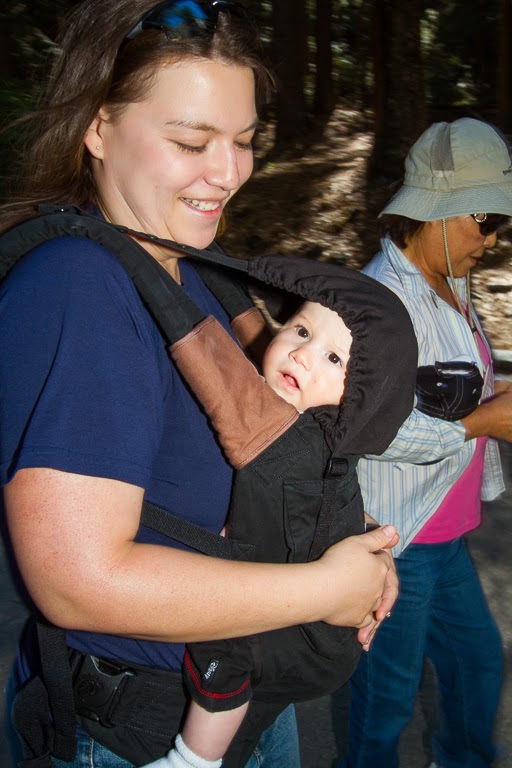 Within just a few minutes we had made it. The noise from the waterfall is really loud here as you see all the water from Lower Yosemite Falls crashing down. It throws up a fine mist into the air and the whole area is a little chilly. 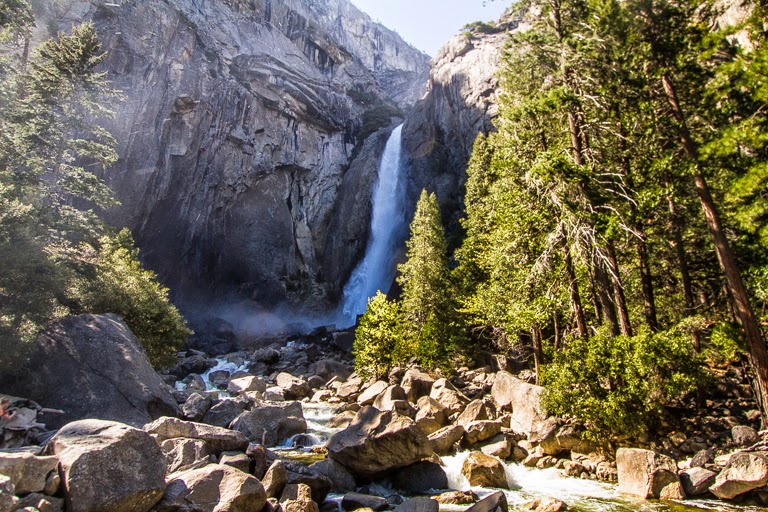 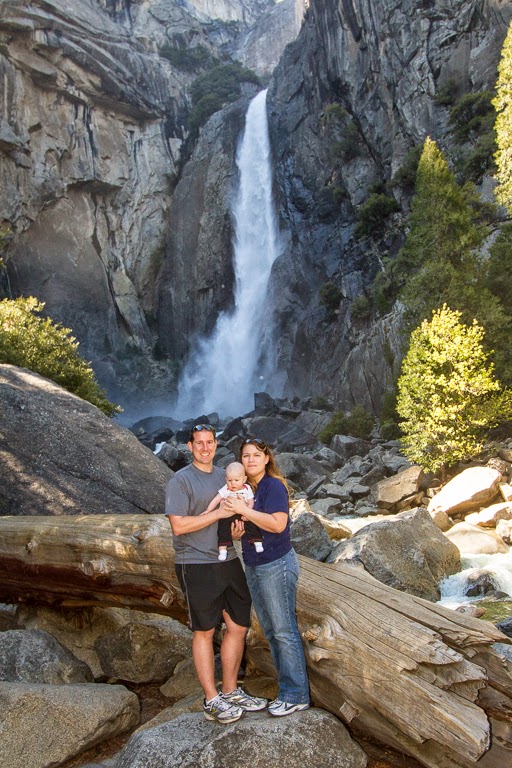 After the Falls, it was time to get head back to the house and eat dinner. We're taking this trip nice and slow with no long days and no rushing around.

I told T I wanted to run out at least one night at sunset, so after a quick bite, I headed back to Tunnel View. 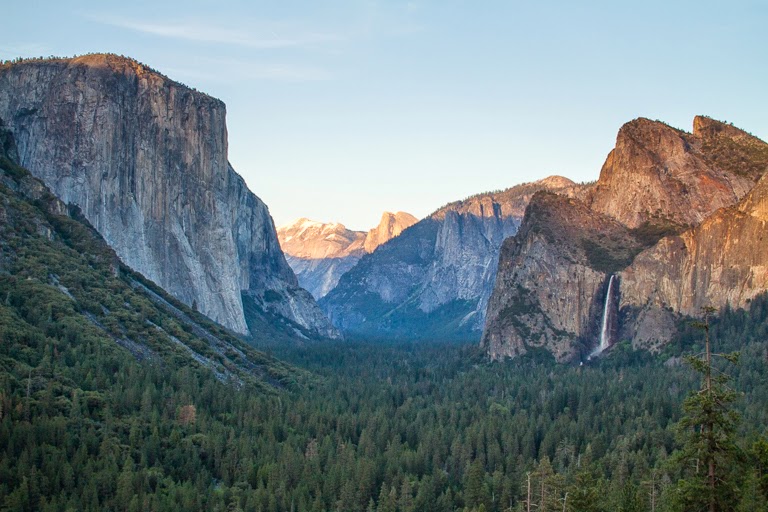 I joined the horde of maybe 10 other photographers with the same idea. I'm the only one I saw though taking a selfie. 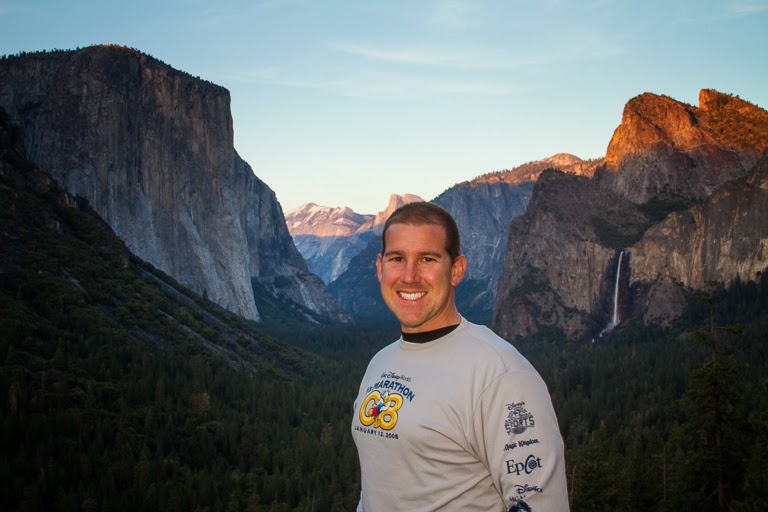 Goodbye sunshine. It turns Half Dome a brilliant orange as it sets. 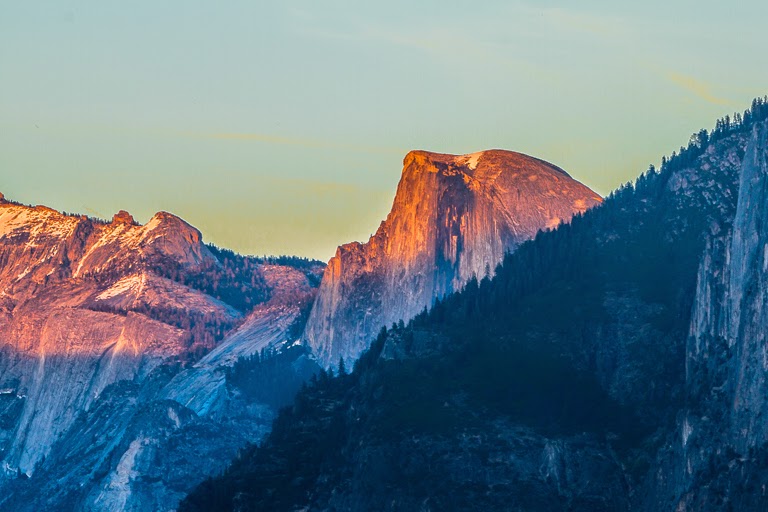 You might be wondering why this is called "Tunnel View". Wawona Road is one of the three main entrances into the park and as you round a large curve and pass through the Wawona Tunnel you're suddenly looking over Yosemite Valley. Completed in 1933 and bored through solid granite, it's the largest highway tunnel in California at 4233 feet. 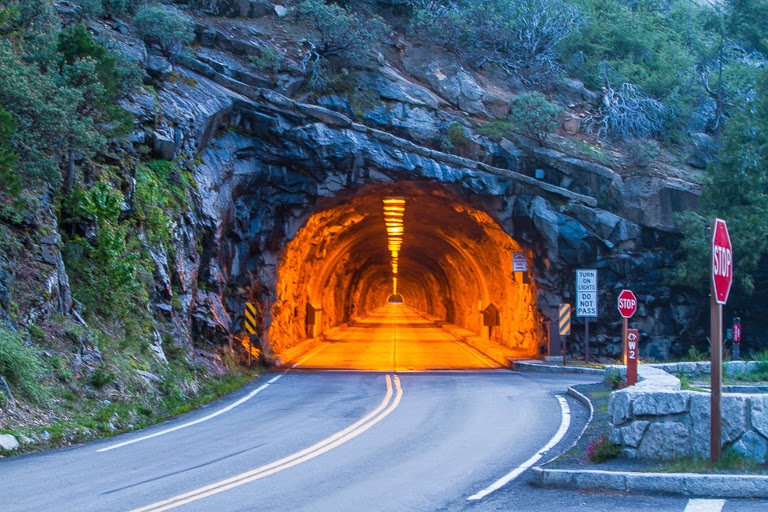 Trying to get a shot with no cars in it took just a little while. It looks a shorter than it actually is and at nearly a mile long, it takes a car almost 2 minutes to go from one end to the other. That's a long time to wait while you're hoping that no other cars enter and you start the whole waiting game again. 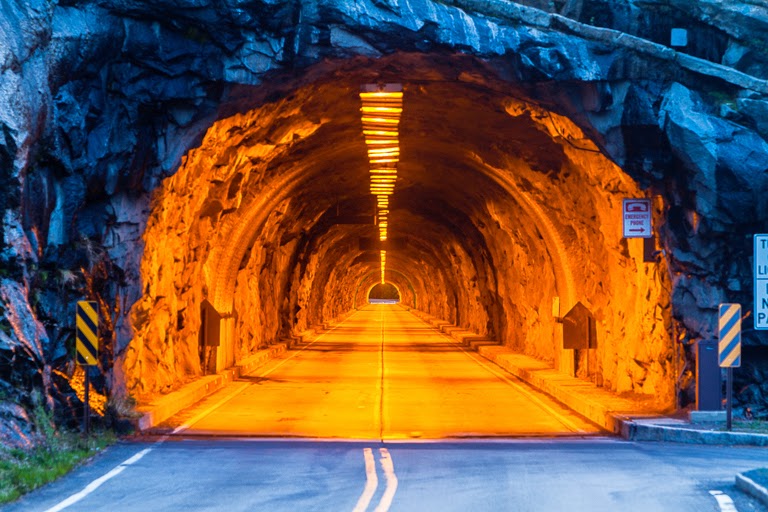 We hadn't seen much wildlife on the trip so far, just a few deer here and there. Theresa and I were surprised to see a coyote trotting along side the road. We expected him to dart off into the trees, but he didn't seem to mind us much. I slowly followed in the car while T tried to get a picture on her cell phone. We must have followed him for 100 yards or more, but cell phone cameras just can't handle low light conditions. I grabbed my camera, swapped lenses, and just had time to grab this shot before he trotted into the woods. 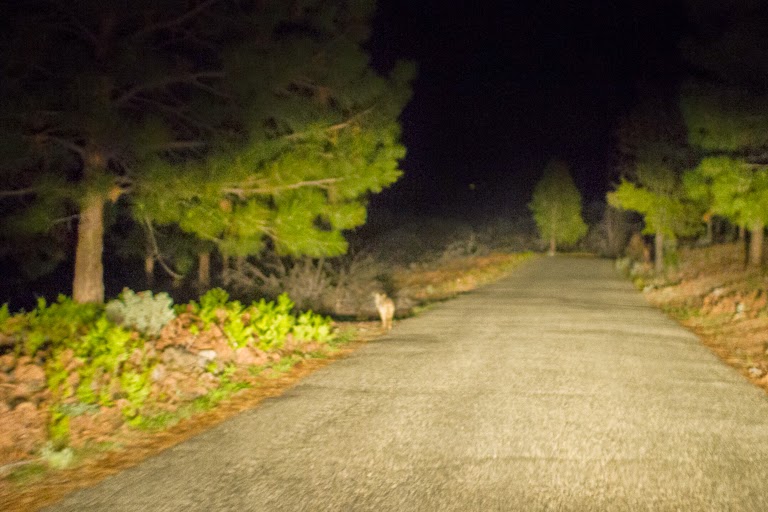 Our first stop was Tunnel View. Even with no moon, if your exposure is long enough, you can still see some features of the valley. Looks like someone forgot to turn off the water on Bridalveil Falls overnight.
Remember how I said it takes 3-4 days to climb El Capitan. Climbers have no other choice but to camp overnight on the side of the mountain. You can see some of their headlamps in the photo below. I see at least 3 people there tonight. 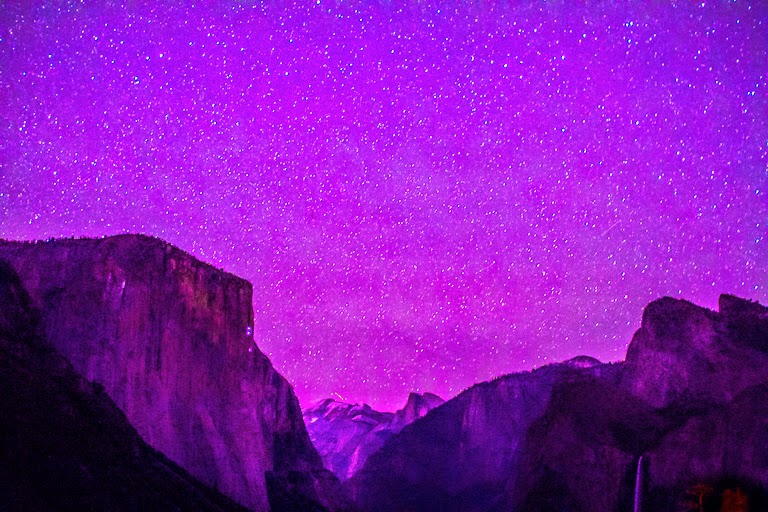 Setting up my camera to take a photo every 30 seconds, I put them all together so you can see the moment of the stars.While we were waiting, we were treated to the tail end of the Lyrid Meteor shower that peaked a week earlier. I saw a few really good ones, including one that I saw streak across the sky then split into 2-3 pieces as it got to the end.

There's so many stars you can see when there's no light pollution. While the camera was clicking away, we struck up a conversation with the only other photographer out there with the same idea. Tommy and his wife were taking a 2 month honeymoon across North America visiting a lot of National Parks. While my shots cover 20 minutes or so of star trails, he's setting up for 3 hours of shooting. It might take a while for him to finish them, but when he's done, I'll look for them on his website at tbes.se 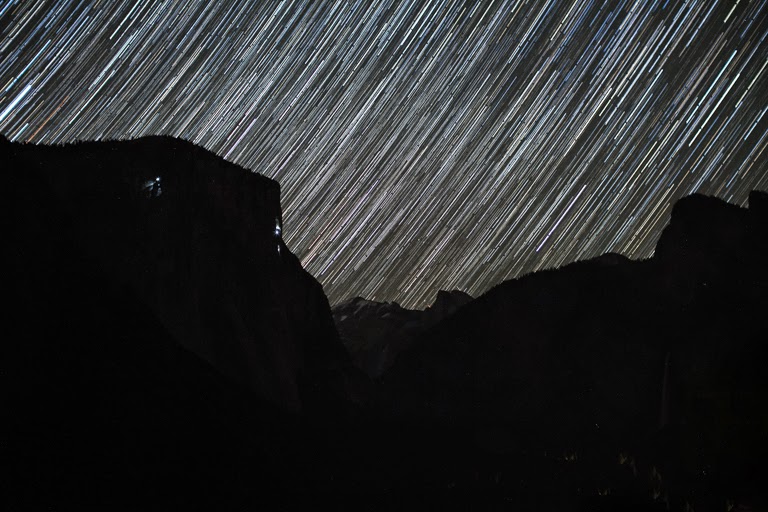 Last stop of the night was bank of the Merced River. I set up my camera and let that click off some shots while T and I stayed warm in the car. 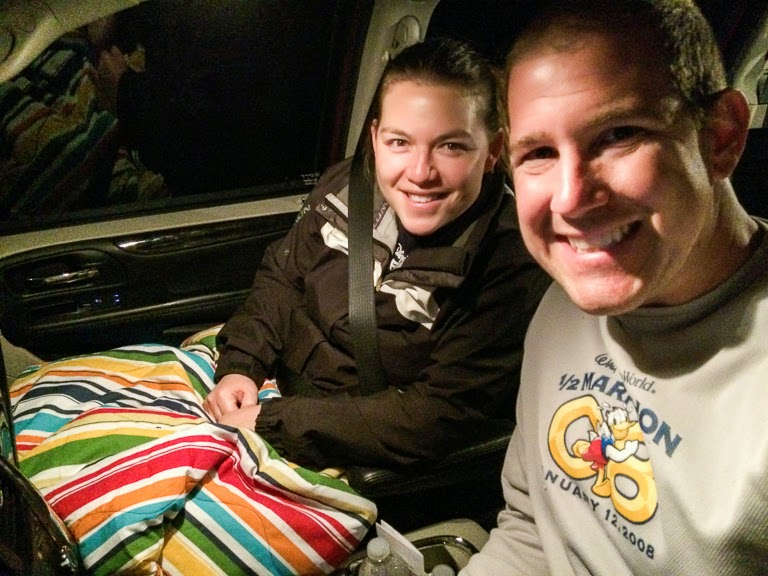 It was simply too dark to get any of the valley to show up, so we only see the silhouette of El Capitan and Cathedral Rock in front of a sky full of stars.

Playing around with what I can do with the shots.

Tomorrow we'll explore the valley a little more on our own at a relaxed pace.
Posted by Joe at 3:00 PM