Well once I saw the commercial, I knew it wouldn't be too long before I stopped by Taco Bell to try their new breakfast items. And what do you know, the window displays are showing the very things I'm really wanting to try. 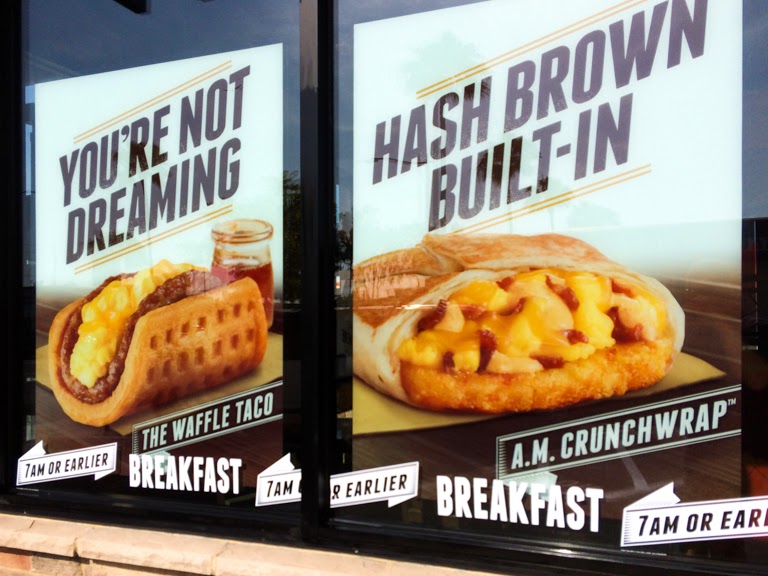 The box is interesting. Shouldn't this writing be upside down, so when you flip the box open, other people are reading it correctly? 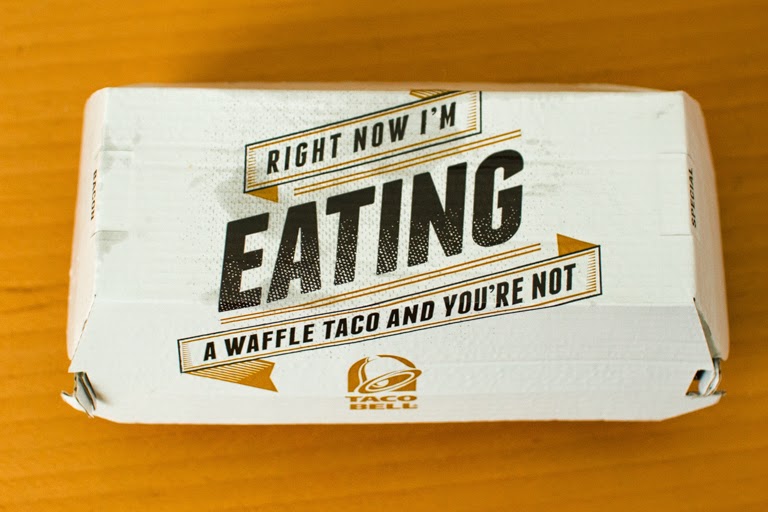 I'm told it's supposed to come with syrup, though mine didn't. 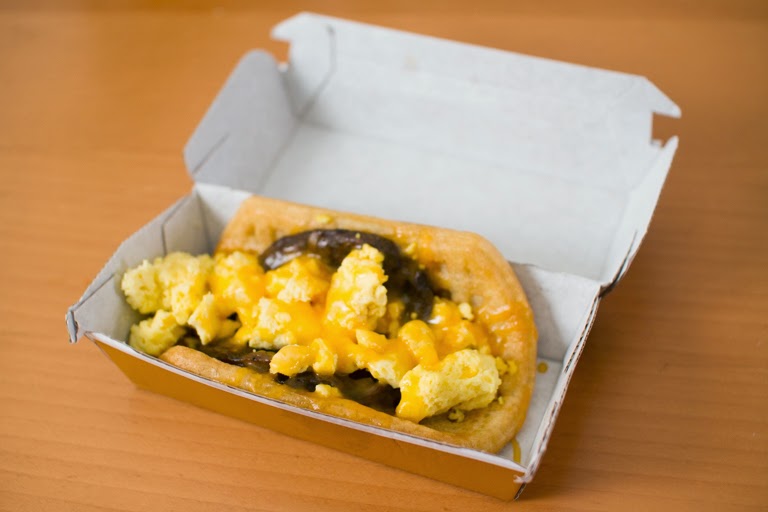 How did it taste? Well remember, this is fast food. It's not supposed to be healthy, right?
As soon as you grab the waffle, you get a film of grease on your fingers. The waffle itself didn't have much flavor, but it did do a good job of holding in the ingredients. The egg and cheese complimented the sausage very well, though the whole thing was a bit greasy. Also coming in at $1.99, it was a bit expensive for the size. I think I liked the novelty factor of it more than anything, because now I can say I have eaten a waffle taco. Can you say that? 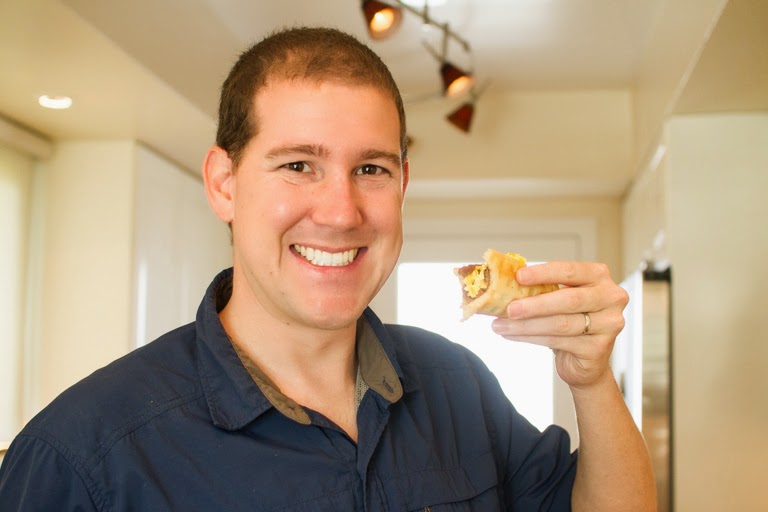 Next up was the AM Crunchwrap. 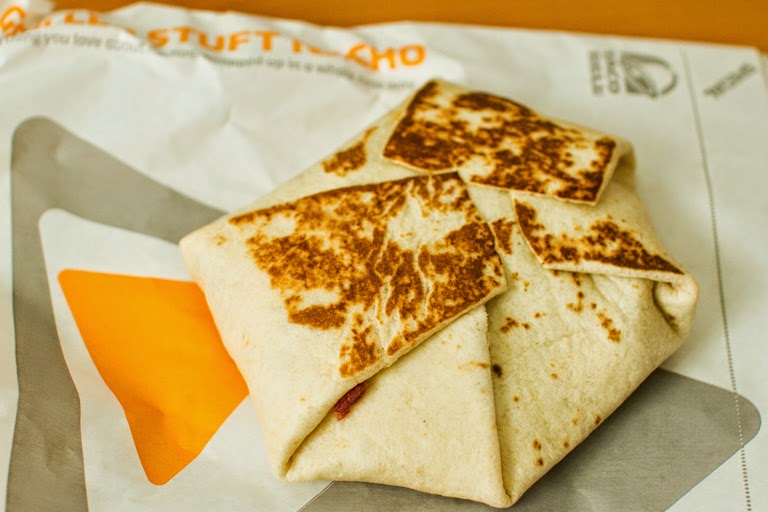 Inside was a hashbrown (the crunch) along with egg, cheese and bacon. There was something else in there that also tasted delicious but I couldn't put my finger on it at the time. Further research after the fact says that it was a creamy jalapeno sauce. Mmm! For $2.49 this also seemed a little expensive, but boy did it taste good. T wanted nothing to do with my sausage waffle taco, but this bacon crunchwrap did interest her. She took a bite, and then another, and then I had to get it away from her. This was the big winner in our book. 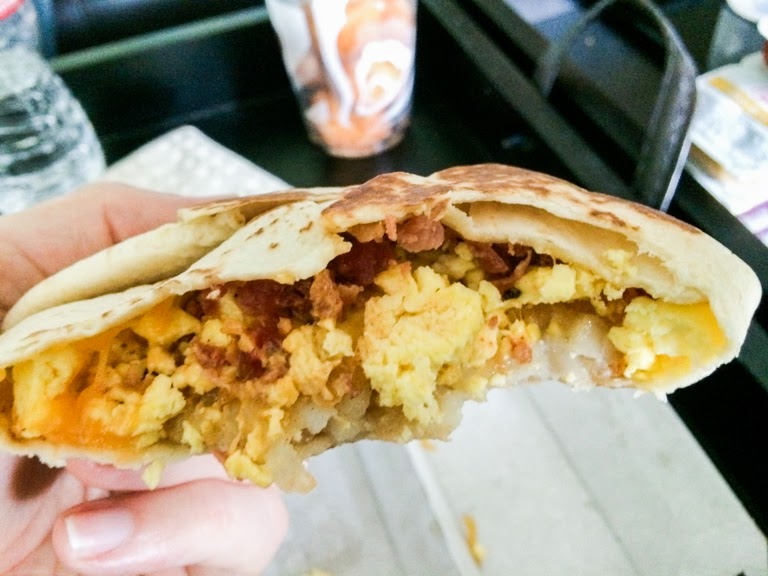 Lastly, there were also Cinnabon Delights. These golden brown orbs of fried dough are coated with cinnamon-sugar and filled with delicious cream cheese frosting. 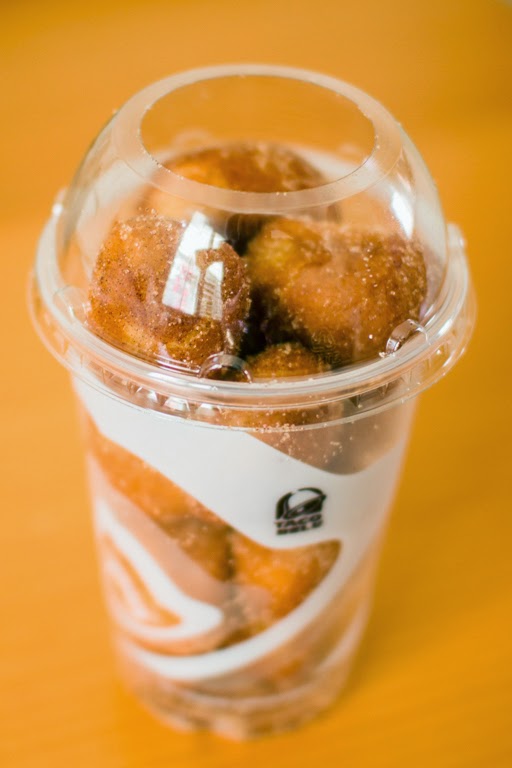 I really wanted to get a picture of the insides of one, but the things were so warm and the frosting so gooey, that I couldn't take a bite of one without making a big mess. I ended up popping the whole thing in my mouth. This container was $4.99 for 12. 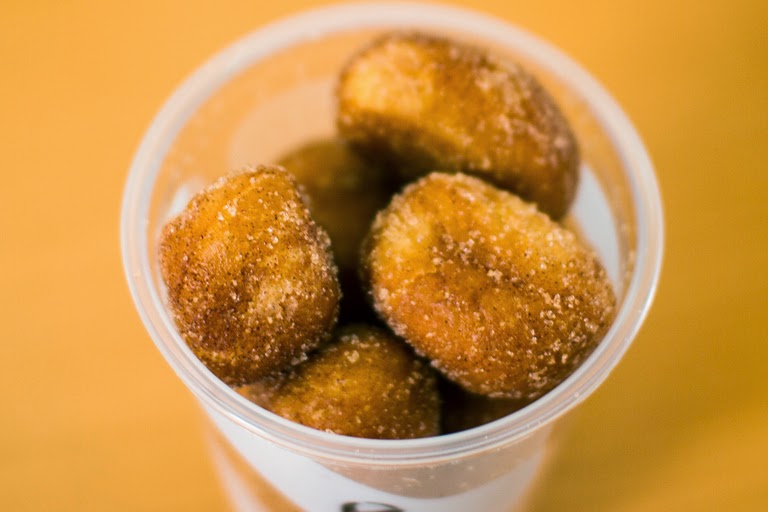 So that's the Taco Bell breakfast. There were definitely some tasty items available. Speaking with the Taco Bell assistant manager while I was waiting for my order, he said that since they started doing breakfast, business had really been picking up. He said the top item ordered was the waffle taco and nearly everyone orders one. Even though the waffle taco might be the most popular, I think the crunchwrap was my favorite of all the items I tried. The next time I'm out at breakfast-time and driving by a Taco Bell, I seriously would consider picking up another one of those.
Posted by Joe at 4:30 AM