The Myers family is visiting from Michigan and we're doing lots of new things. Today we're headed to the Disneyland Resort. We're not going into Disneyland itself, but we'll be walking around Downtown Disney. Baby steps. 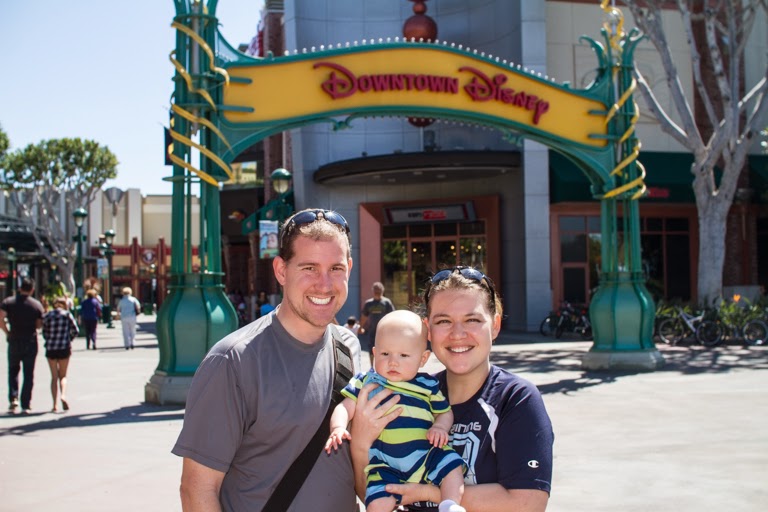 One of the main thing we're here for is pin trading for Abby and Austin. Our first stop is the Disneyland Hotel. 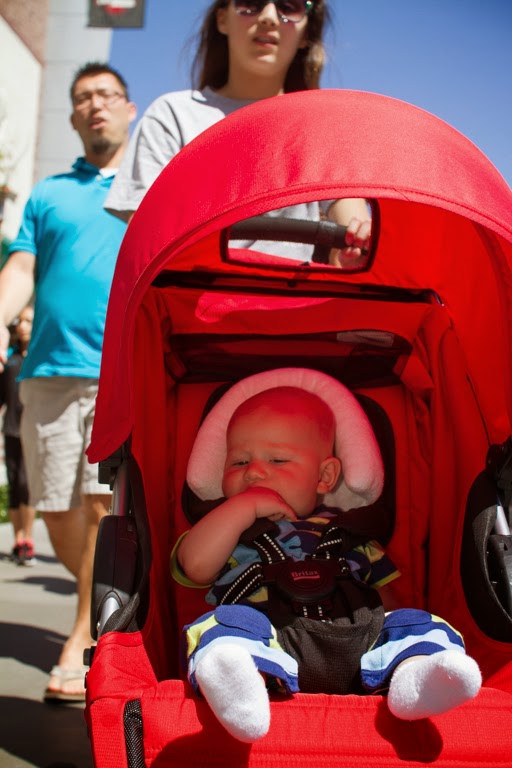 And though we weren't expecting to see any Disney characters, someone just happened to be wandering around the hotel. It's Goofy! It's also Ian's first time meeting a Disney character! He stayed in the stroller and Goofy came to him. We told Goofy it was his very first time meeting a character and he spent a bit of time with us. At first he didn't react much, but Goofy started grabbing his feet and playing peek-a-boo. That got him smiling. 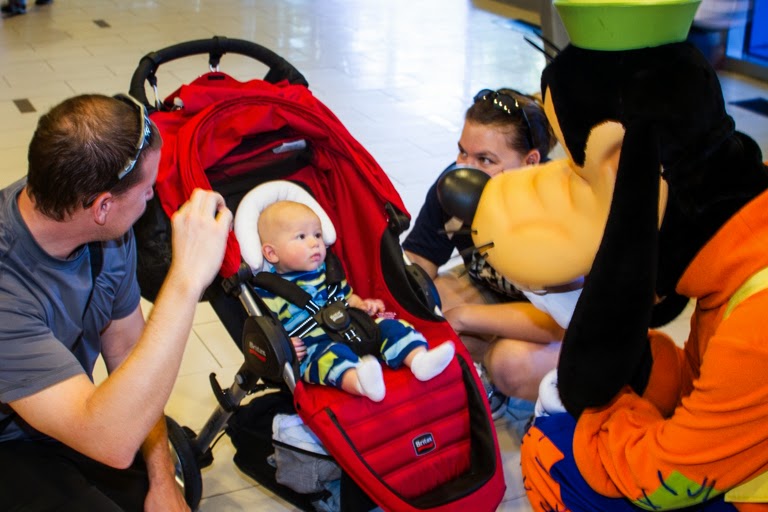 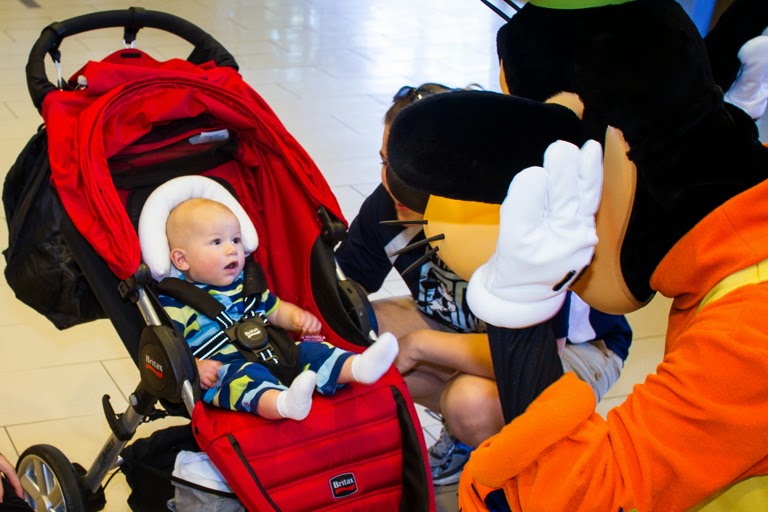 We happened to catch a bit of it on video. Theresa and I were grinning ear to ear the whole time. It was great! Big thanks to Goofy for spending so much time with him!

Someone was a happy guy! Way to be a big boy and not cry! 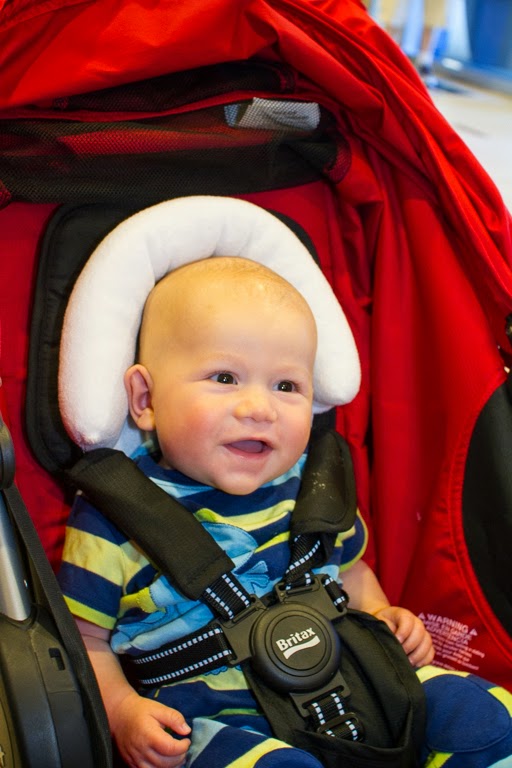 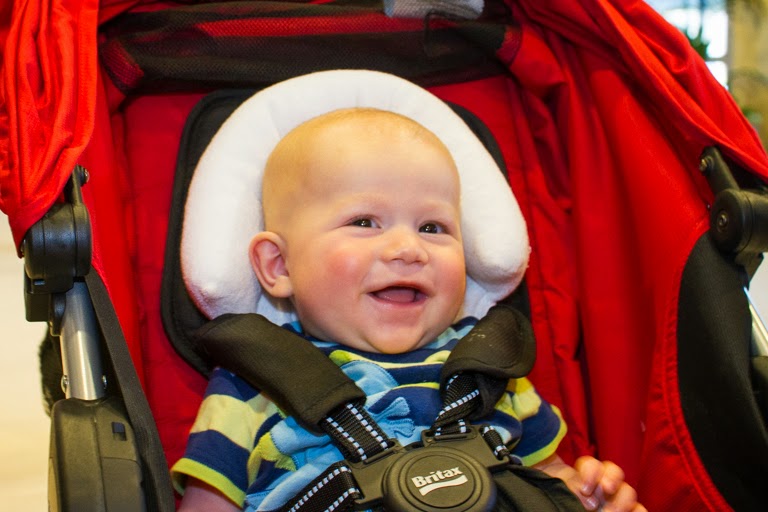 We continued to the front desk so the kids could do some pin trading. Goofy walked over to us again and spent some more time with us. 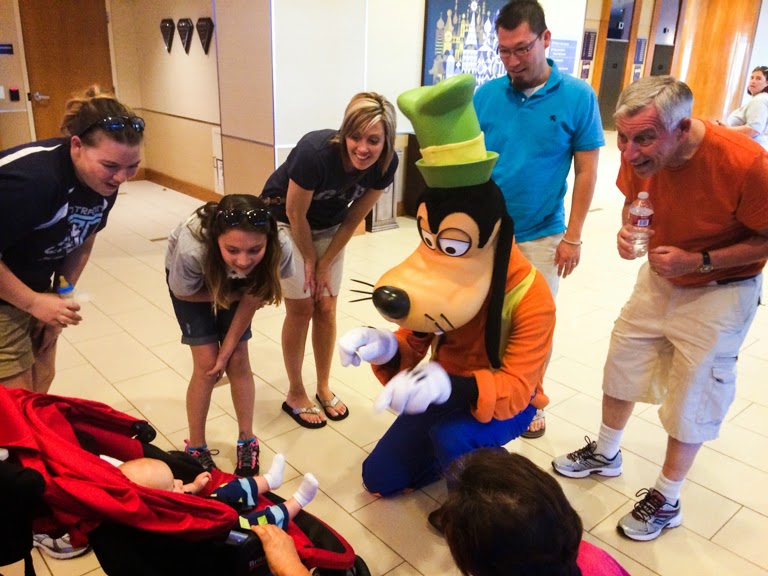 Well that was unexpected and totally awesome! Off to explore more of Downtown Disney. It's been so long since we've been here, so maybe it's not new, but seeing this huge Lego Hulk was new to me. Why didn't he have purple pants on though? 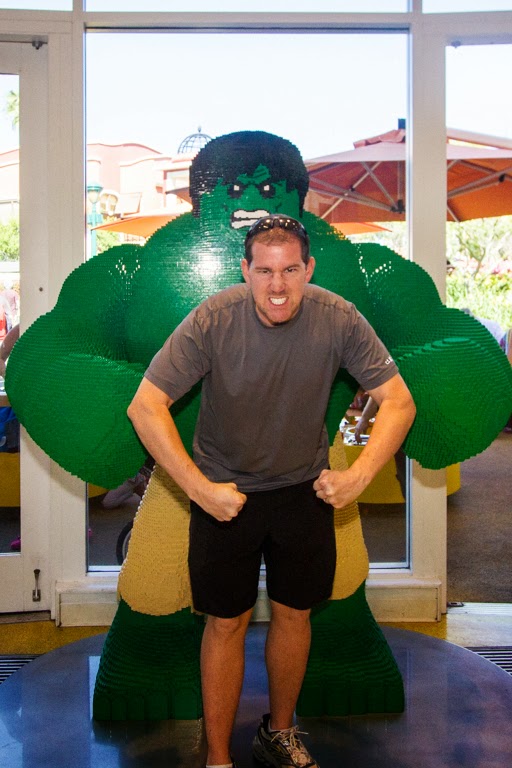 Ian was wide eyed the whole time. He liked seeing the wall of colors at the Lego store. 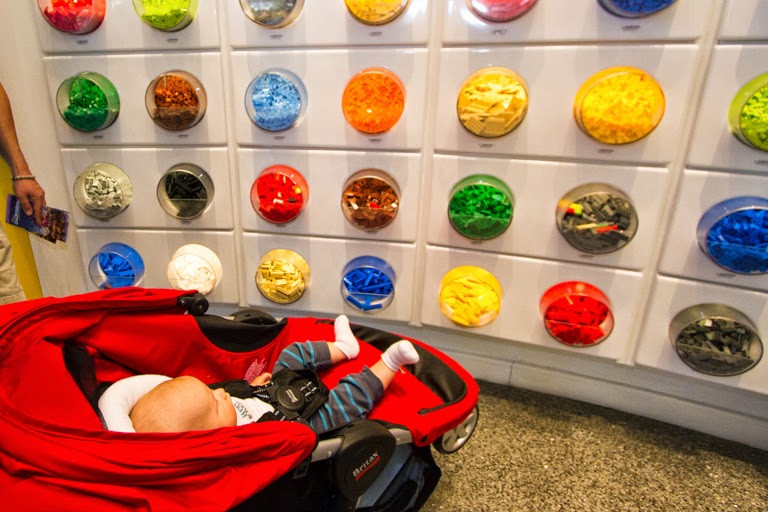 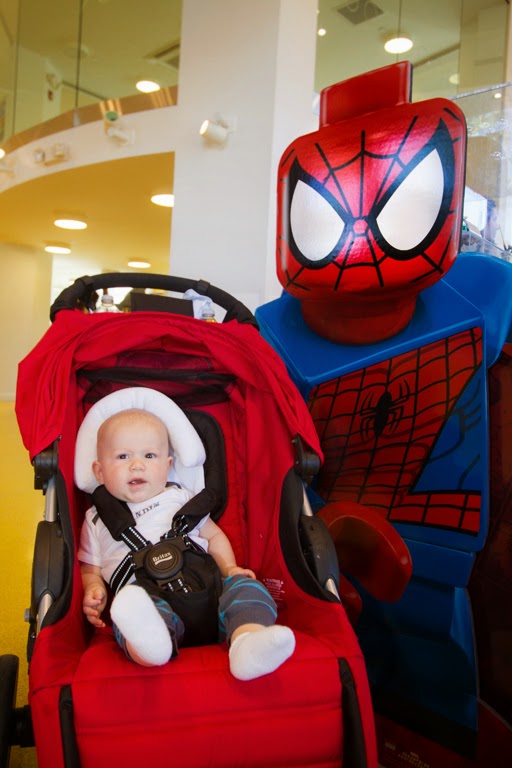 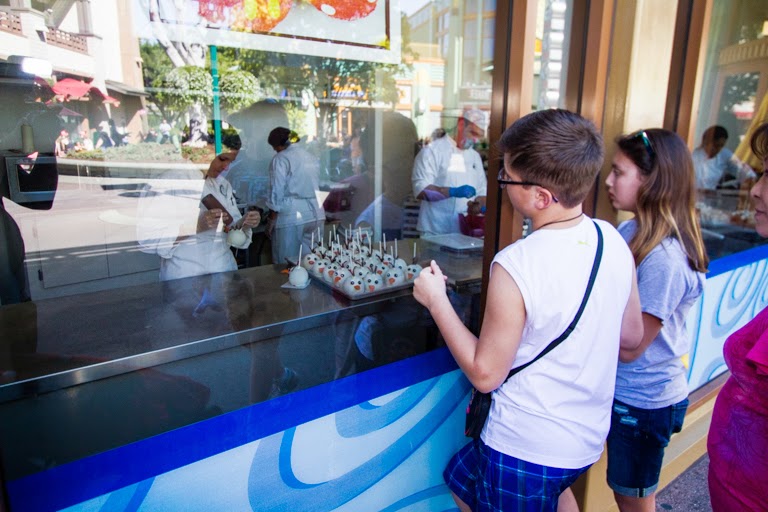 Lastly we visited the Disney Store where Ian wanted to grab things off the shelves. Looks like we're going to have to keep a close eye on him in the future. 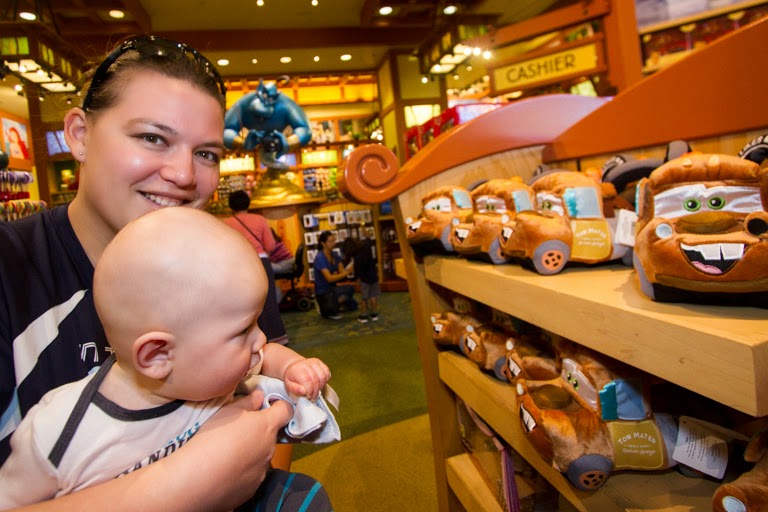 I don't collect Mickey Ear hats (just the plush Disney hats), but this one was tempting. 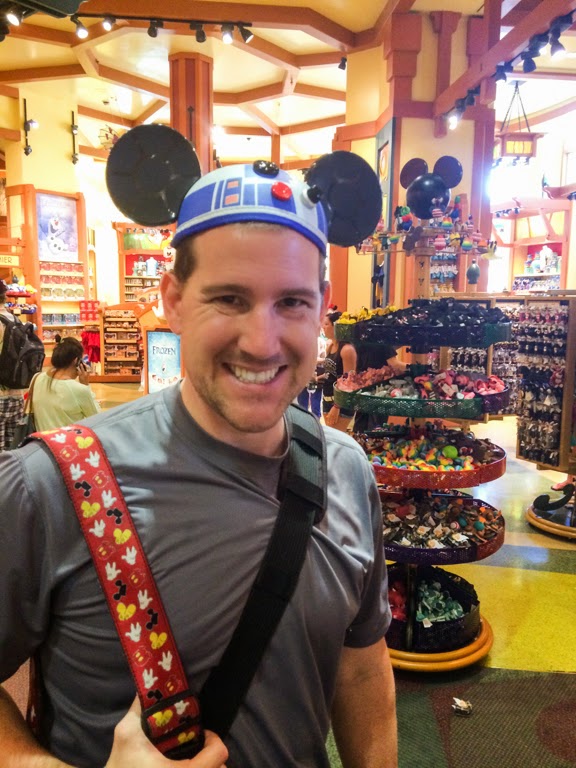 Lookout girls. There's a future Prince Charming in the works. 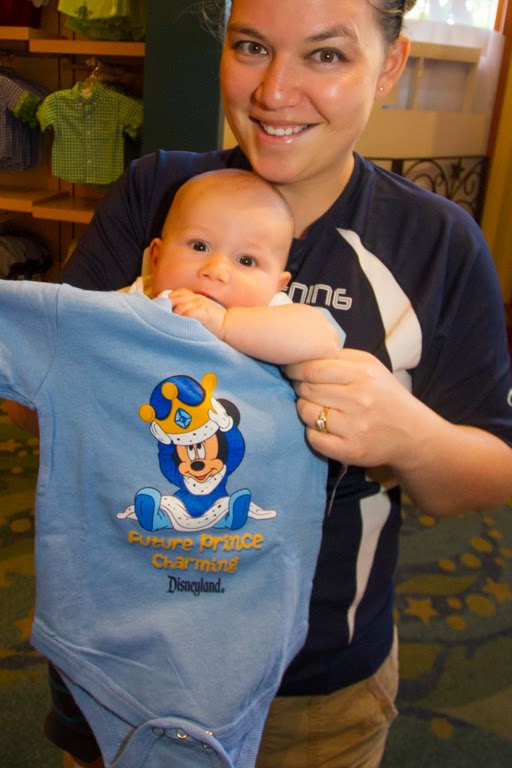 Ian had a fun time while we were out. Theresa and I were both curious how he'd do in a longer car ride. It's a little over 30 minutes from our house to Disneyland and he didn't get cranky at all. He was interested in the surroundings from the car, then nodded off. This was on both the drive there and on the way back. Let's hope he doesn't mind some longer car rides.

Once we got home from Disneyland we got ready to celebrate Austin's birthday. Ian was fascinated with Donald's goatee. 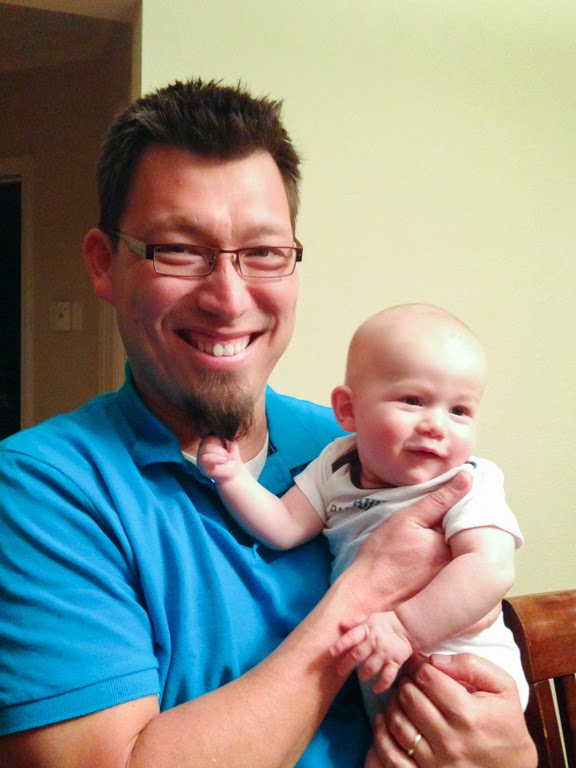 After a tasty dinner of cheese fondue and rib-eye steaks cooked on the charcoal grill, we sang happy birthday to Austin and had chocolate fondue. 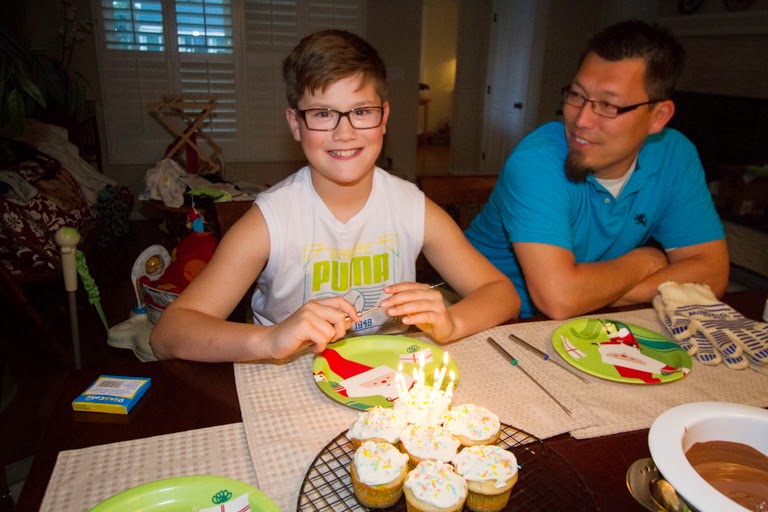 Theresa went crazy with the dippers. Not only did we have strawberries; we also had pineapple, apples, rice krispy treats, nutter butters, and marshmallows. 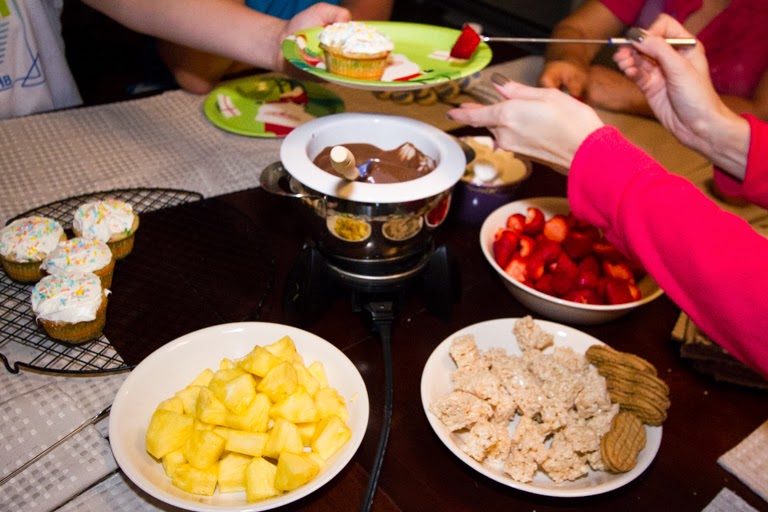 The rest of the Myers' visit here, Ian got so much attention. 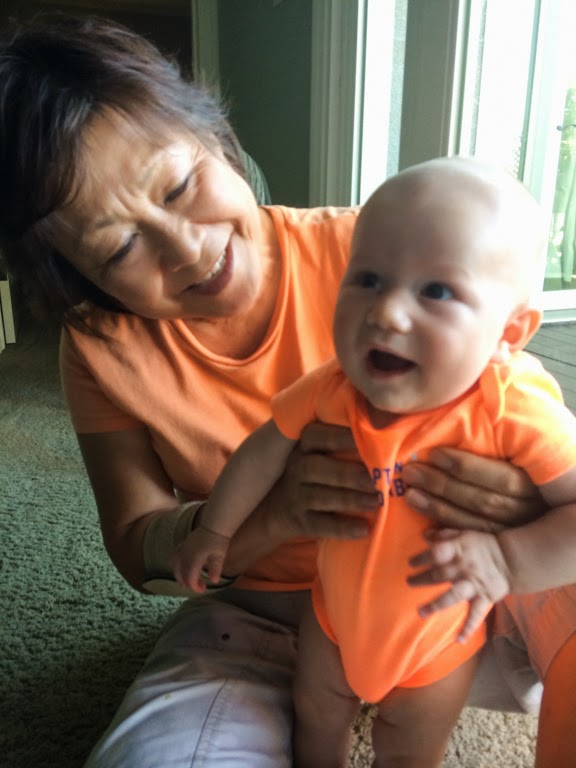 It seemed like he was always being held. He fell asleep on Donald. 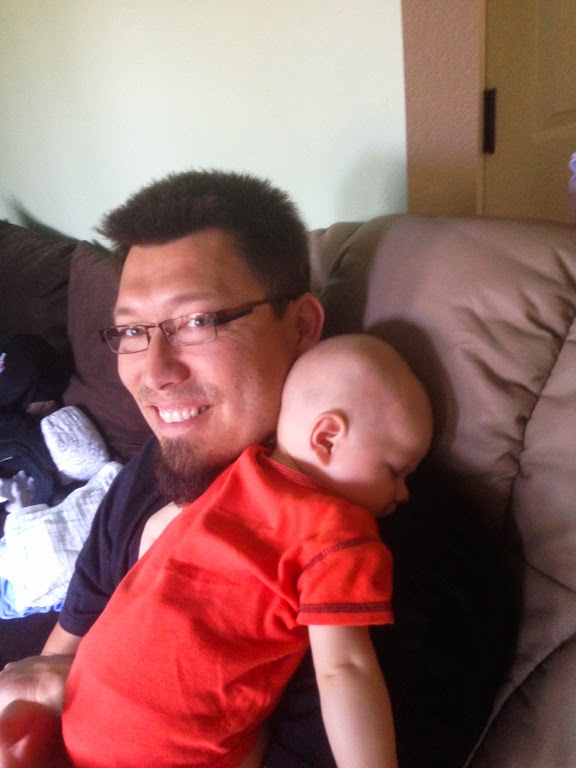 And laughed and giggled with his Aunt Amy. 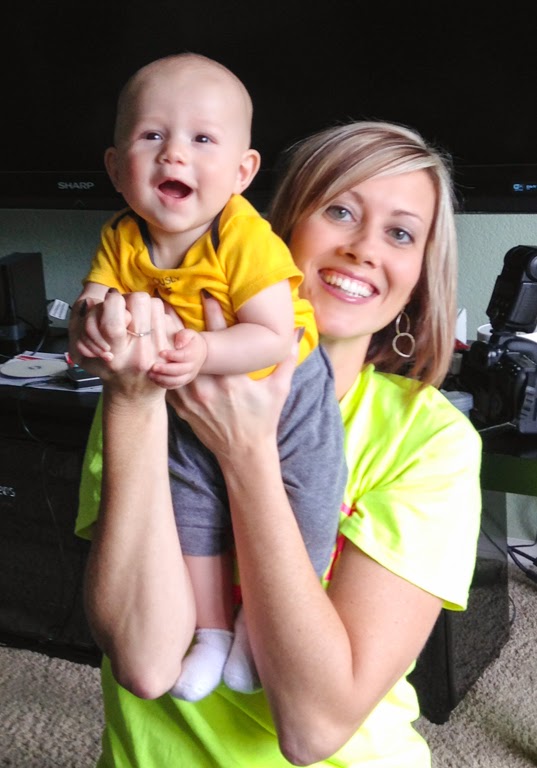 Unfortunately the week passed too quickly and it was time to say goodbye to Donald and Austin. 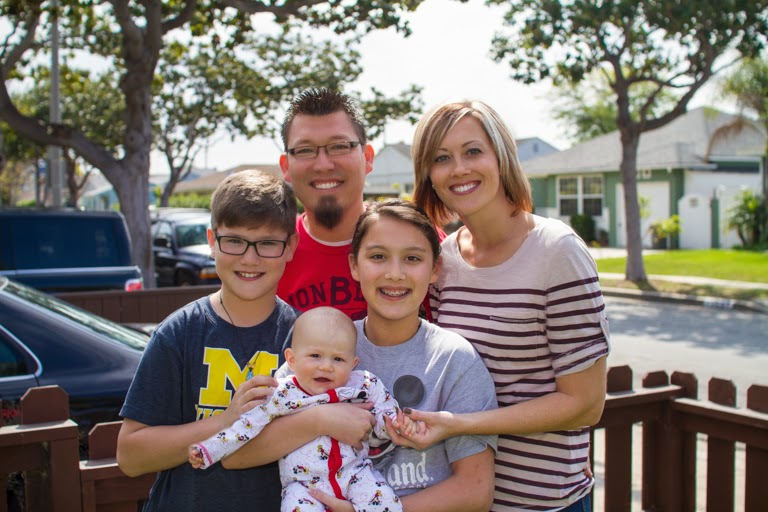 Thanks for coming to see me! 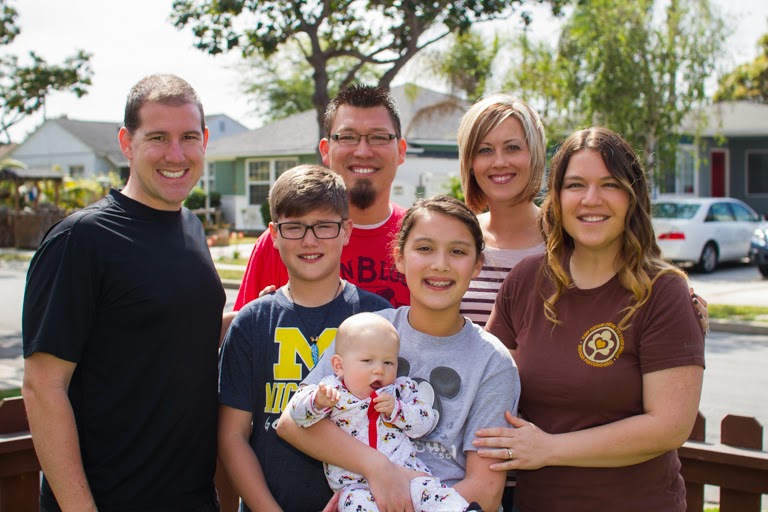 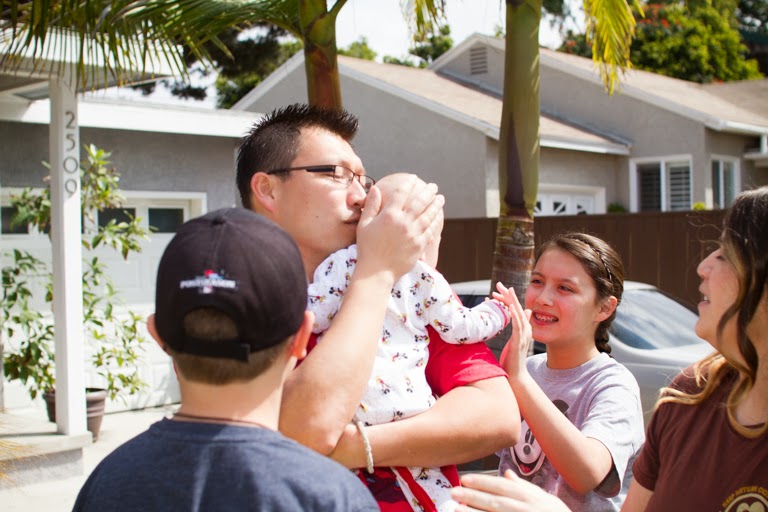 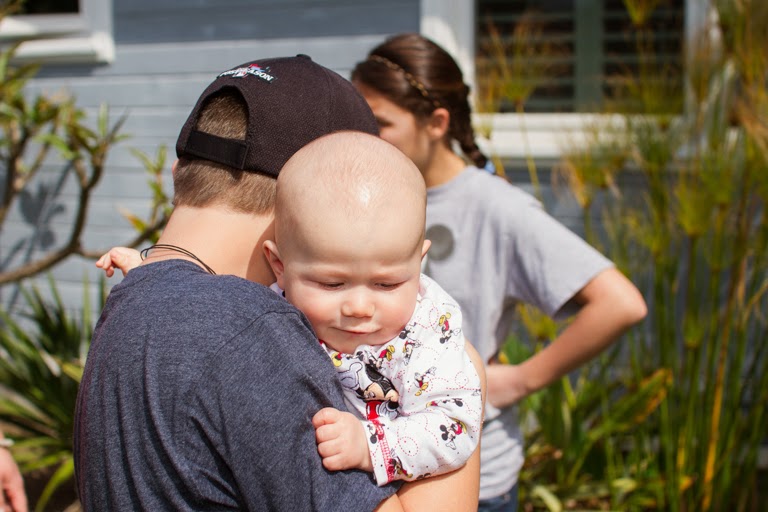 Only Amy and Abby left. They'll be leaving a day later. 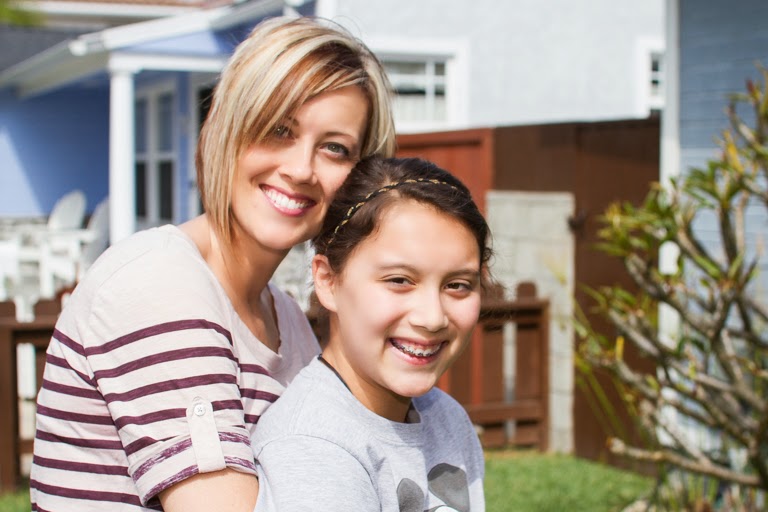 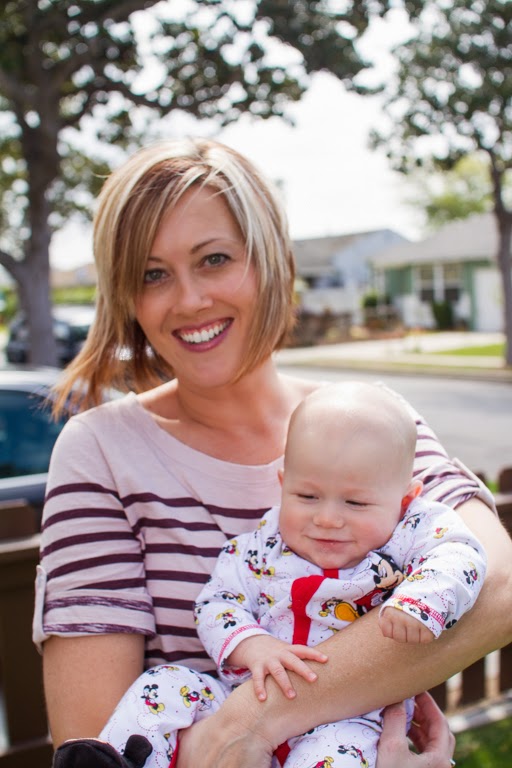 Any time I asked if someone wanted to hold Ian, Amy was usually the first to say she'd take him. Already he's liking volleyball! 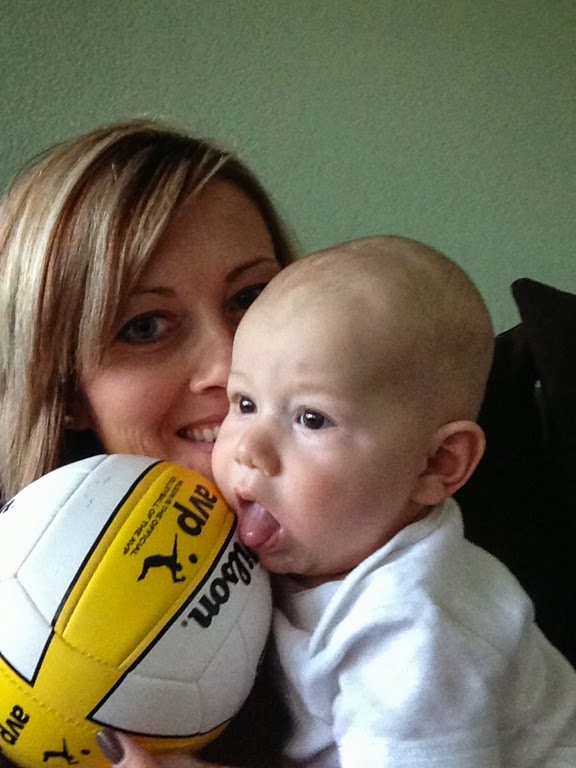 Laying on a pillow on Amy's lap and playing with his feet. He's become really interested in his toes now. 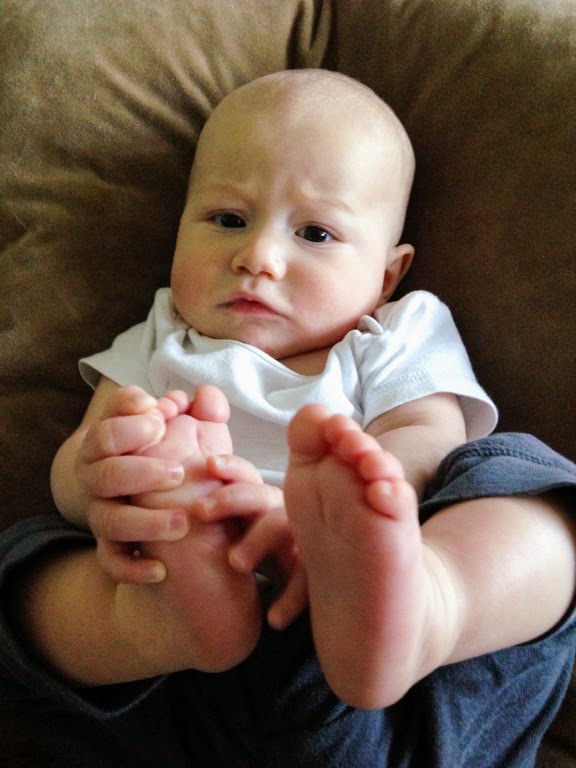 Abby wanted to make sure she did one more thing before they left. Pinkberry is always a fun treat. 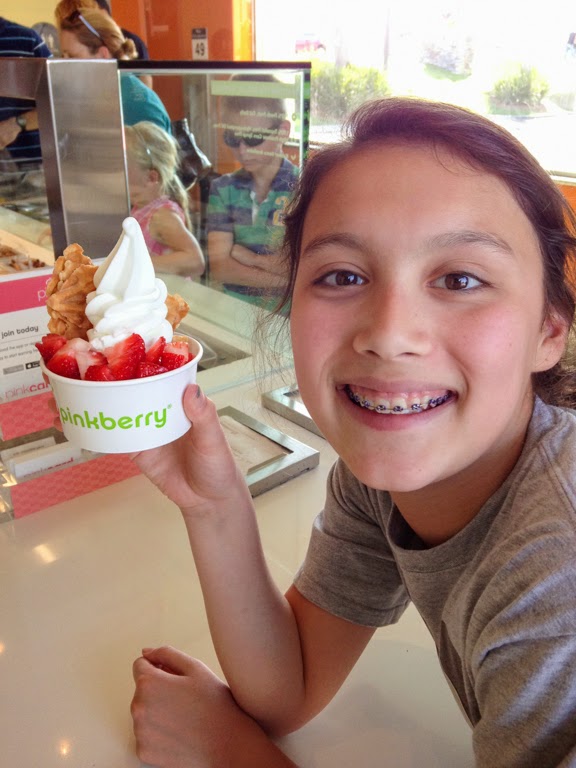 We had a great time having everyone visit. Hope to see everyone again soon!
Posted by Joe at 1:00 PM