Theresa and I have long been fans of Allison Lefcort's work. I happened to see she was going to be at Disneyland this weekend, so we all headed to the park to meet her! 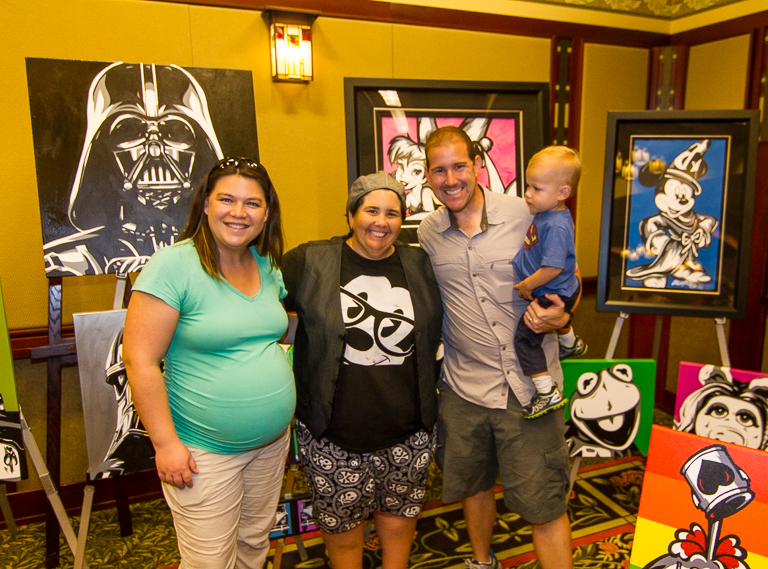 The forecast called for rain in the morning, and shortly after exiting the Mickey and Friends garage, we found some. 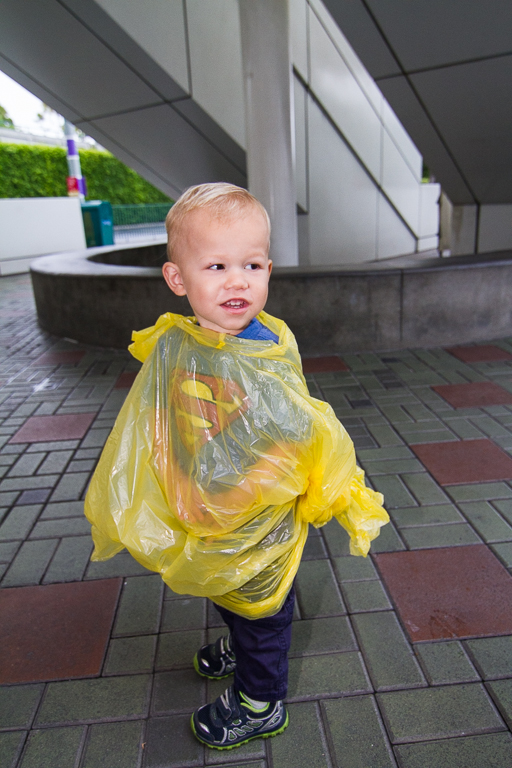 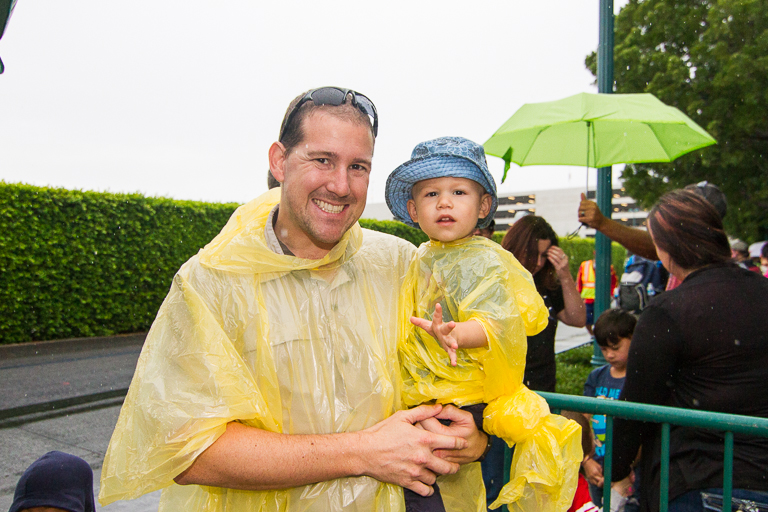 The three of us explored the World of Disney store while we waited for Jacob to arrive. While we waited, we looked through the baby stuff. There were some cute pajamas, and Ian saw this stuffed animal and said "Baby Sister's Minnie". 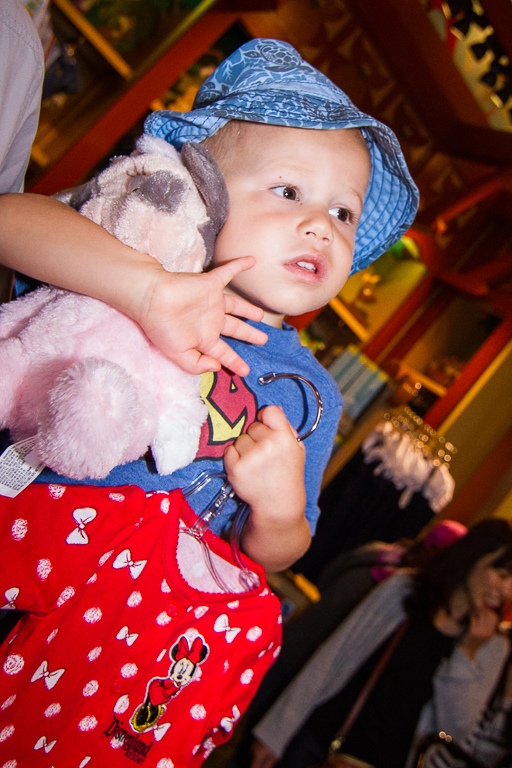 Over to the Grand Californian conference rooms, where we see new art from Allison Lefcort! 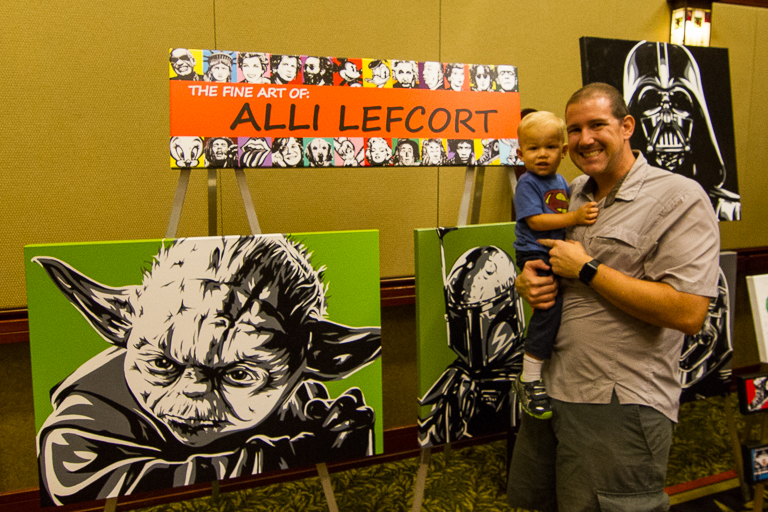 And there's Alli!
I told her we just loved her art. She asked if we'd just seen it today, or if we'd seen it before. Ha. We've been following her work for the last 10 years or so. We ran across her painting titled "Making Magic" all that time ago. She grabbed her iPad and said, "This one?" Whoa. She's got all her paintings on that iPad? I'd love to take a look at all her Disney paintings.
I told her I followed her on Facebook, and also on her blog (which I said she doesn't update nearly often enough). She asked if we had ever bought any pieces or just liked looking at them. So far we've never bought anything, but we've enjoyed her work so much I felt we should probably get something. Especially since we're getting to meet her in person after so many years.

Alli told us about the different pieces she offered. She'll even do a commissioned painting of a Disney character of your choice for $2500 for a 12x16 piece. You tell her the character, she'll do a marker sketch, and after you give final approval, she'll paint you an original work. She gets suggestions of new characters to paint all the time, but the one she really wants to get commissioned to paint is Chernabog. I'm sure that one would look pretty awesome. 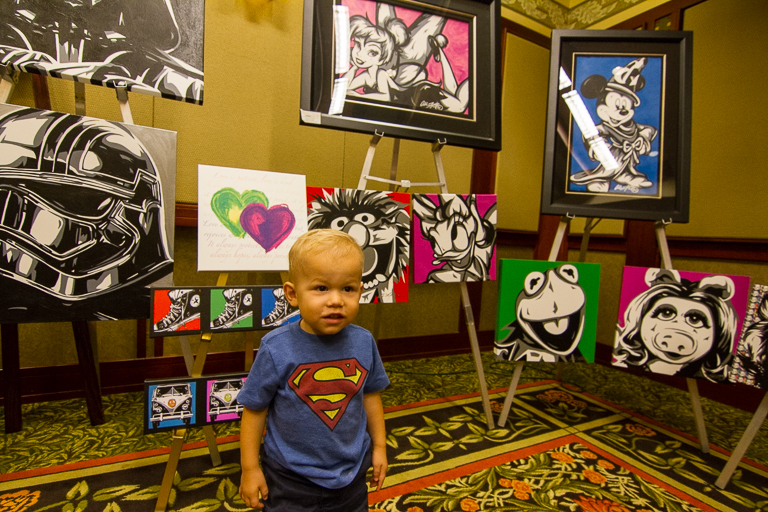 In preparation for the new movie, Alli has also been working on some new Star Wars pieces. I'm excited to see more of these! 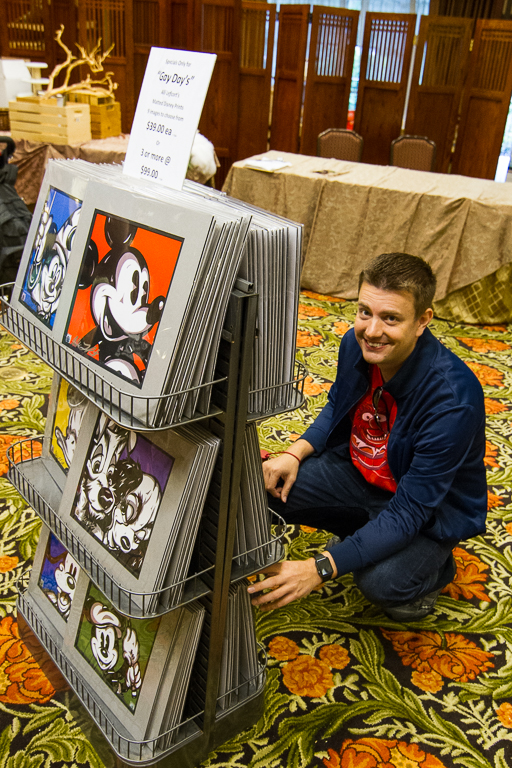 And Alli signed and dedicated each of the prints for us too! 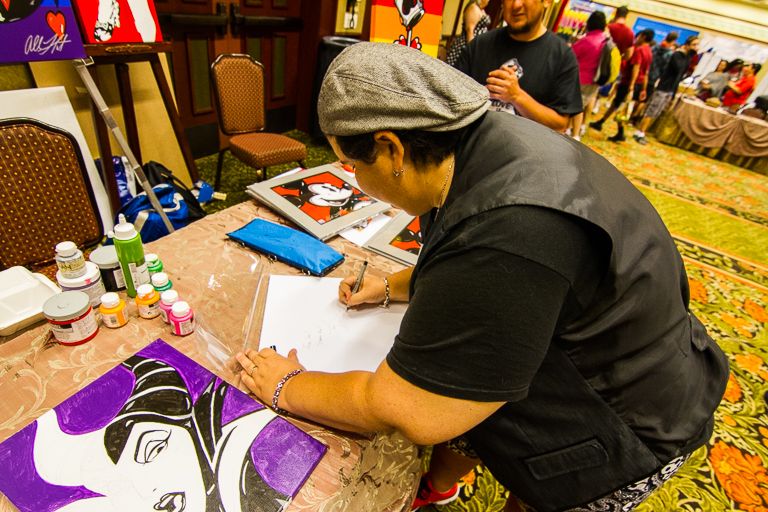 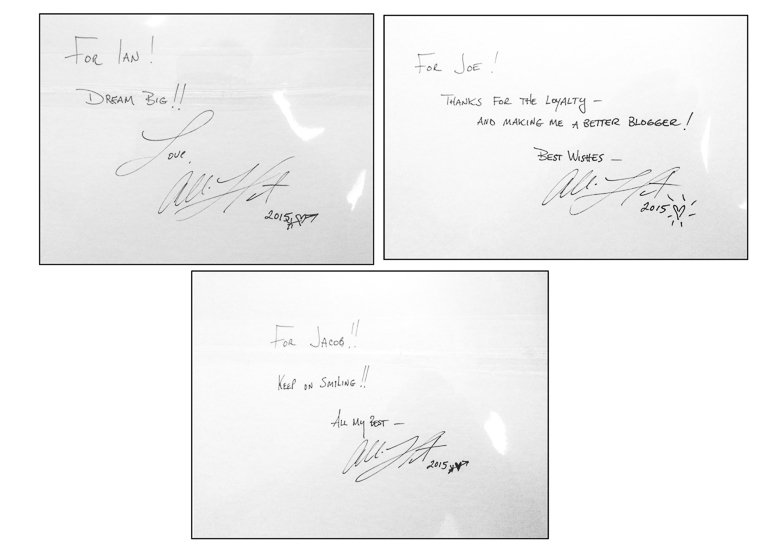 It was awesome to finally meet someone we've admired for so long. I'm looking forward to seeing what she'll create next! 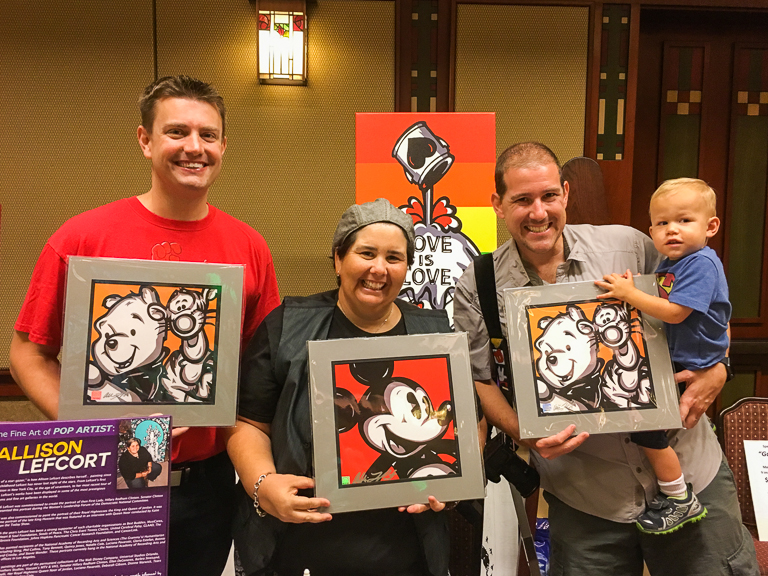 We had planned to spend the morning in the park, hanging out with Jacob and going on rides. However, while we were talking to Alli, Jacob got a text from a friend saying that Disney raised the prices of all their annual passes overnight! T and I both have the pass with no blackout dates, which cost $779 each. Overnight Disney raised the price of it to $1049! Whoa!
So... what to do, what to do. 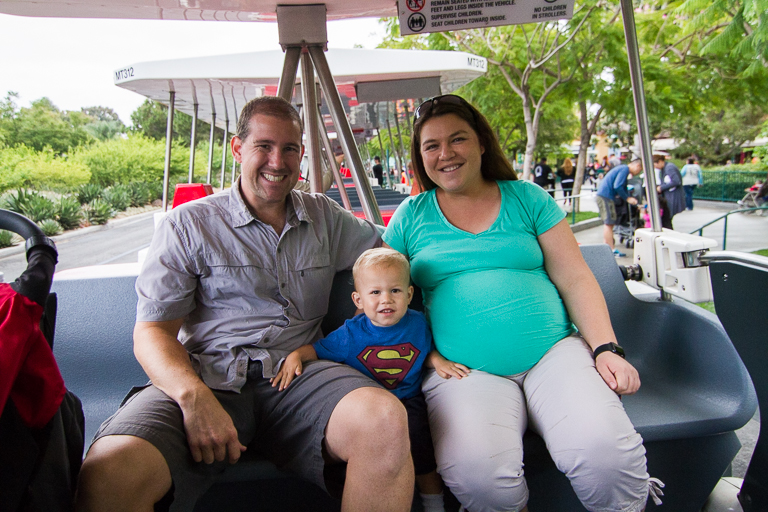 The four of us quickly left Disneyland and drove to a nearby mall which happens to have a Disney Store inside. It was almost 11am, just before the store opened. Already there was a line forming outside to get in. I'd guess there were 15-20 people there along with us. Wonder what everyone is doing here...
As soon as the door opened, we rushed to the registers, while almost everyone else rushed to the Star Wars toys. I saw people grabbing multiple boxes of multiple toys. Guess they just got a new shipment.
So what are we doing here? Well the Disney Store sells vouchers for Annual Passes that don't expire until December 2016 and they're still at the old price!

Ian is nuts about stuffed animals and when he saw the giant displays of them, he made a beeline. 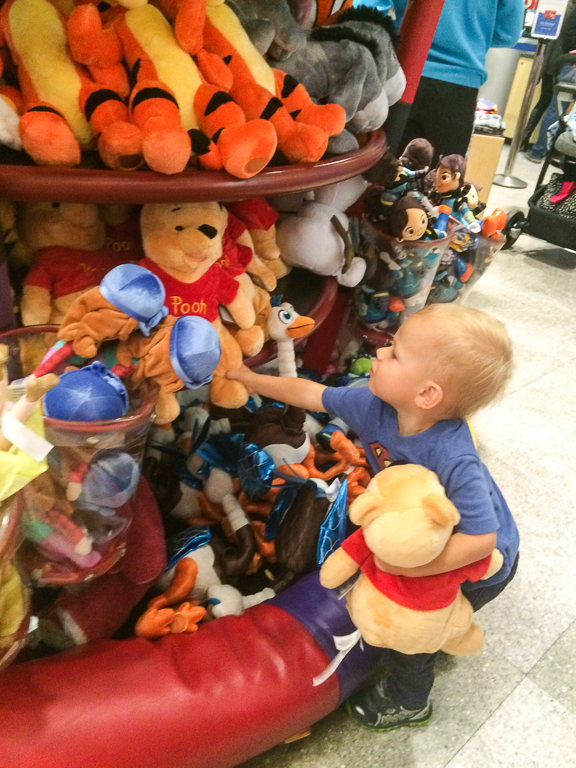 How many can I hold? 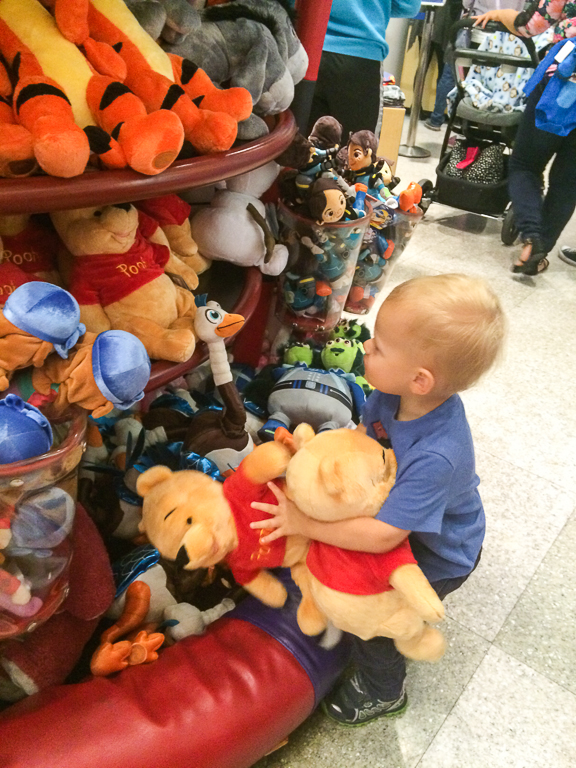 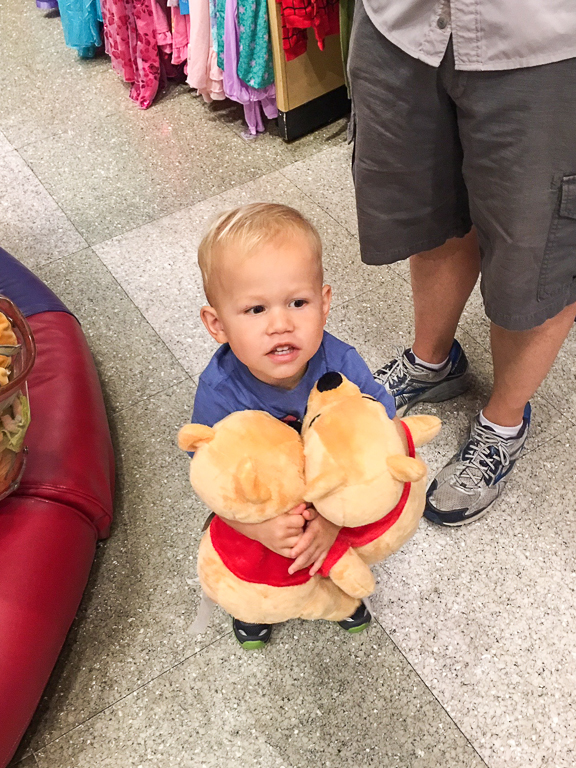 And he loved the Tsum Tsums as well. He went down the line, grabbing one of each of them and holding them tight in his arms. 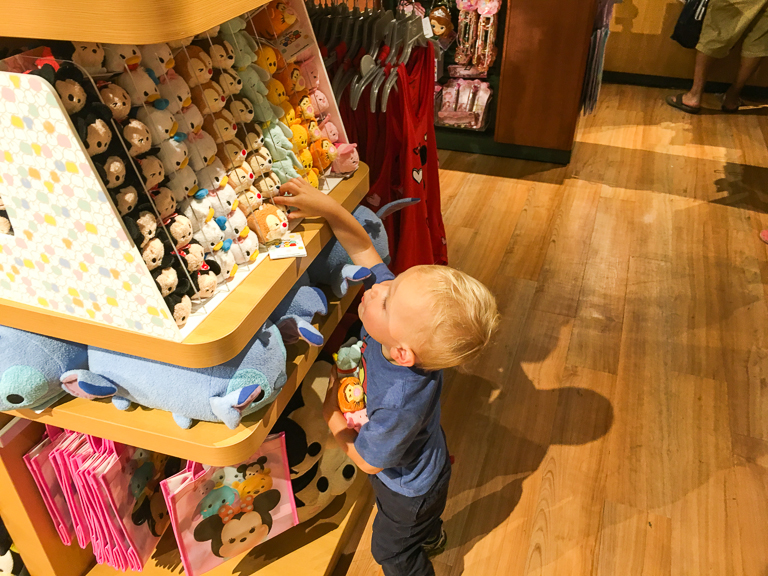 Unfortunately we have to put them back for now buddy. Maybe we'll be able to get a few later. 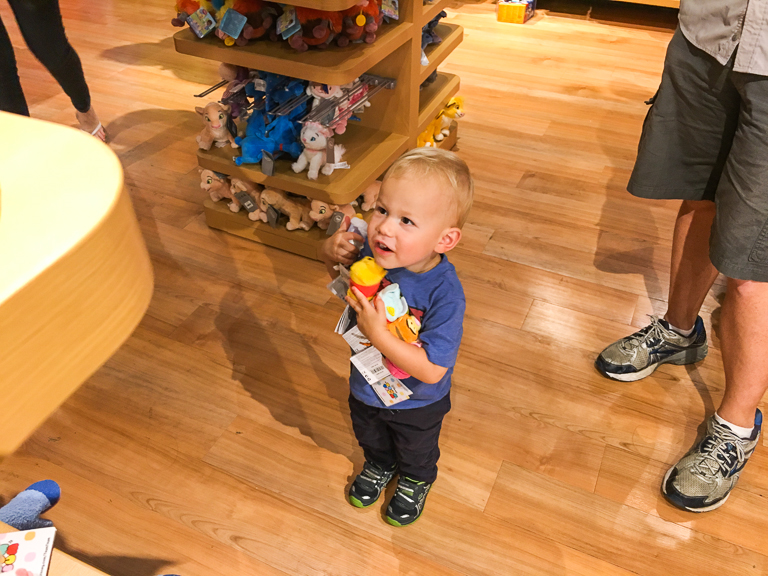 At the register we met some characters from the upcoming Pixar movie "The Good Dinosaur". Arlo the dinosaur was being ridden by his pet human Spot. Ian had to hug each of them. 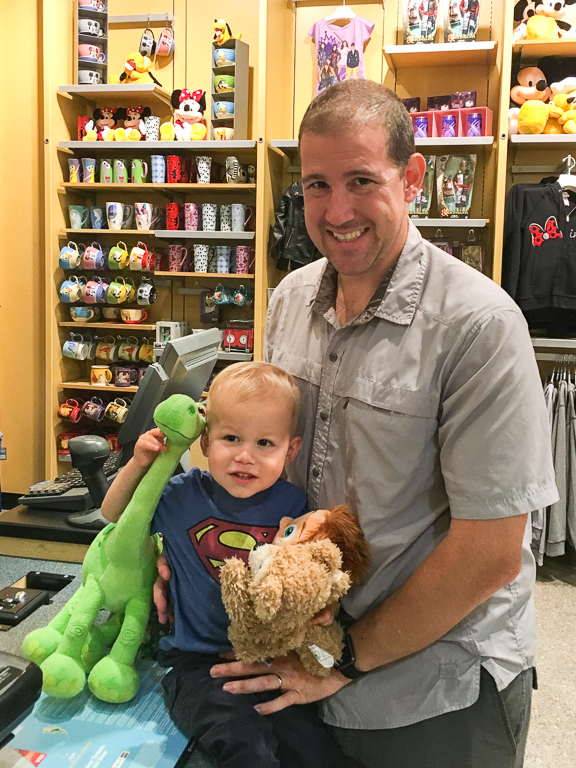 Luckily the passes we wanted were in stock! Whew. Good for another year.

The four of us drove back to Disneyland, but the line was ridiculous to get back into the parking structure and the line to get into downtown Disney was even worse. Theresa and I were satisfied with our day at Disneyland, so we just dropped off Jacob and headed home. Today was a good day.
Posted by Joe at 11:30 AM