After seeing the amazing eclipse and then chatting with the people parked next to us for half an hour it was time to head back home. Little did we know there was another fun adventure awaiting us. 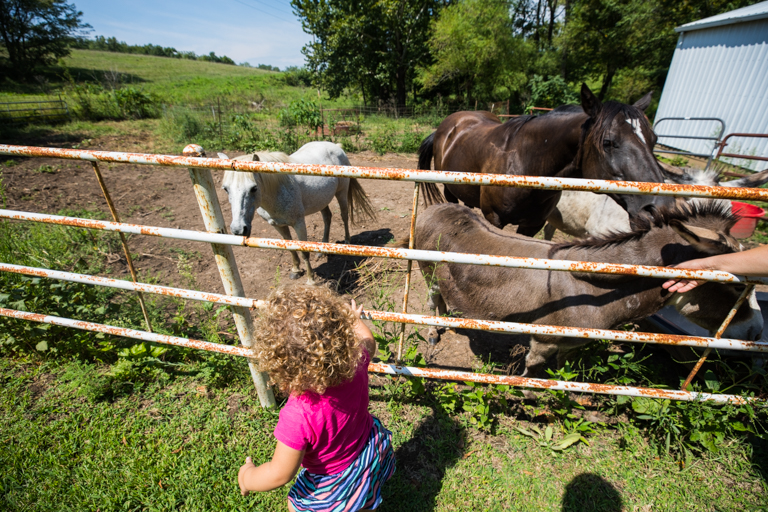 With everyone clearing out, we all took a closer look at the church and the cemetery. Ian asked what all those headstones were... I told him I'd explain later.
The cemetery is really well maintained here. When we pulled up, the caretaker Richard said they were asking for a $20 donation to help with the maintenance of the cemetery. After the craziness we'd been through today, I was happy to part with $20 for a spot with a decent view. 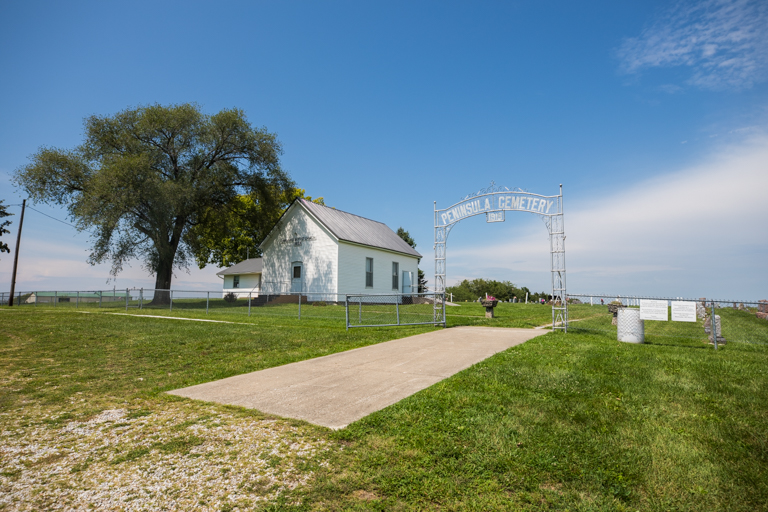 Inside the church, we found Richard again. We chatted briefly about the history of the church. When we told the kids it was time to go and to say "Thank You", they both ran over to give Richard a hug. Sweet kids. 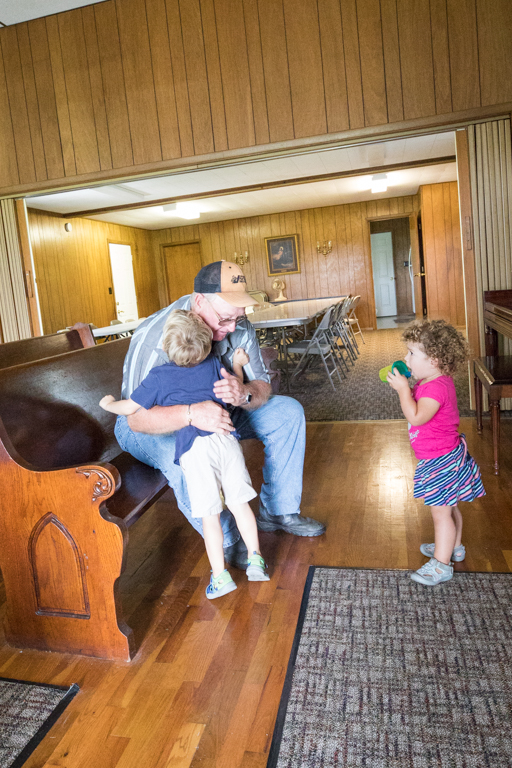 While the kids were running around making friends earlier, they came across Mimi (Melanie) who gave them cheese and crackers. 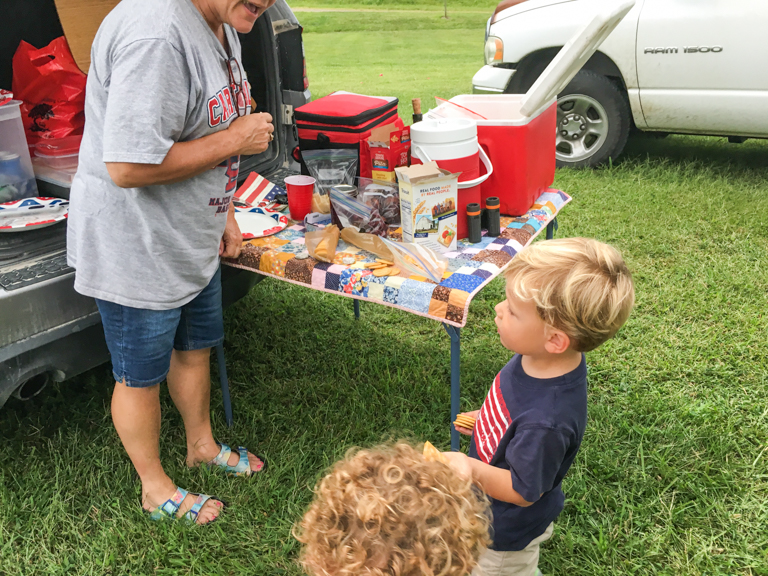 They loved munching on their snacks during the eclipse. 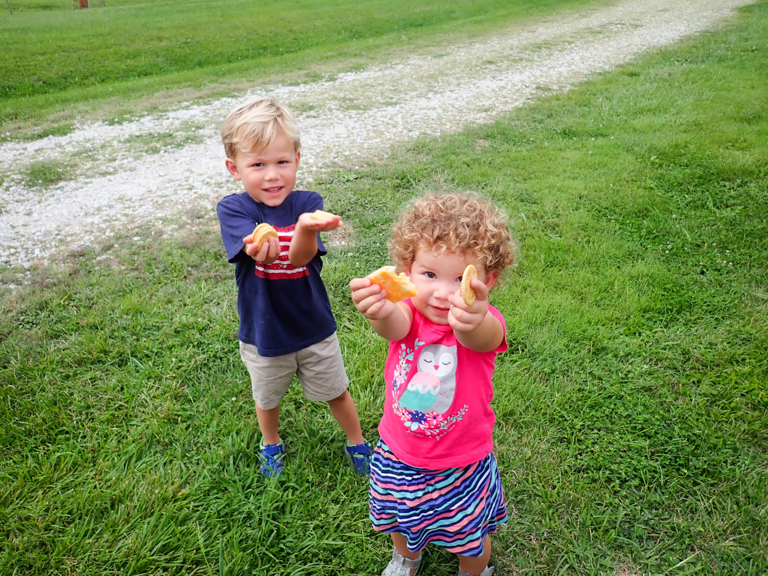 We exited the church and walked over to Mimi to tell her goodbye and thank you for sharing her food with us. She told us that her and her husband had a place nearby and they have a whole bunch of animals. Their grandkids love coming over and seeing all the animals. Would the kids like to come by?
Absolutely! 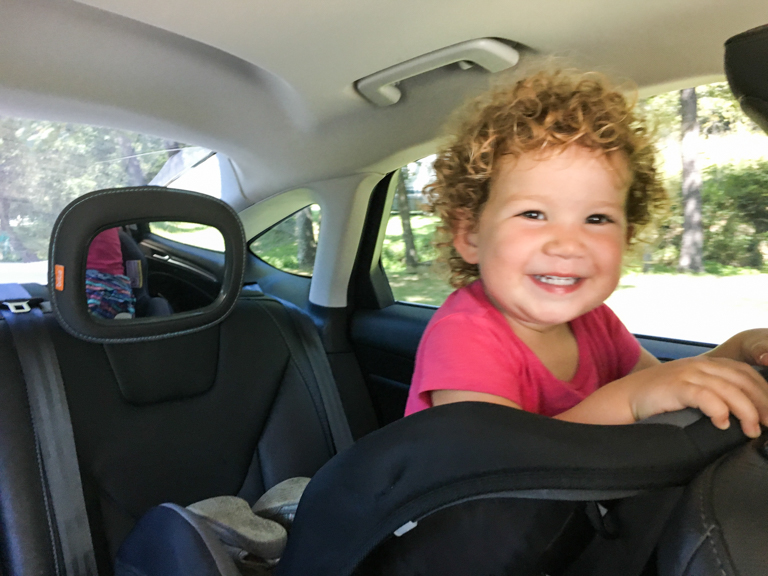 As soon as we pulled up, we saw horses and donkeys! Ian and Alli adore animals. They just don't have much opportunity to see them in Los Angeles. 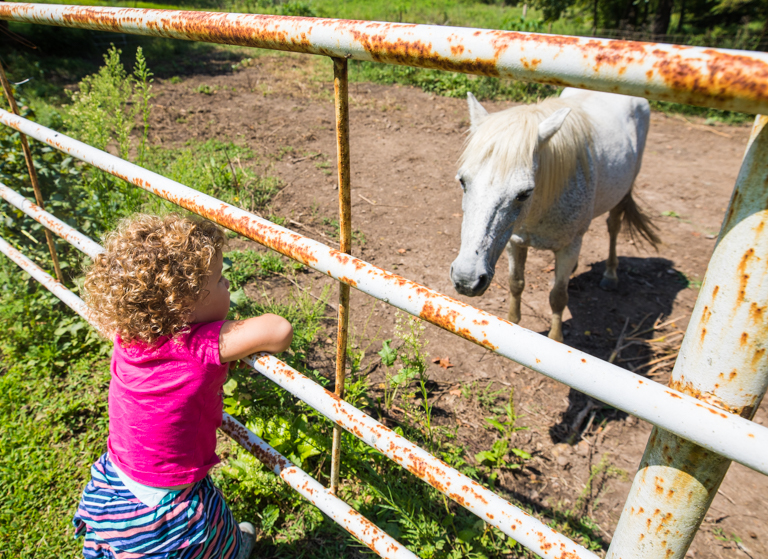 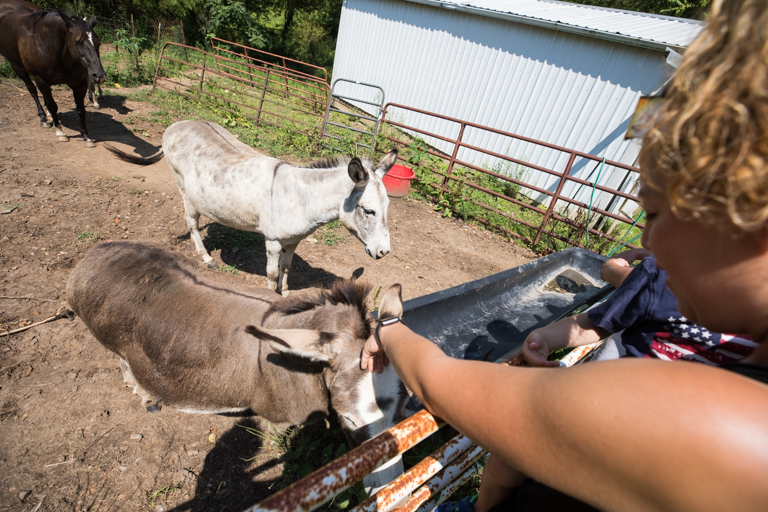 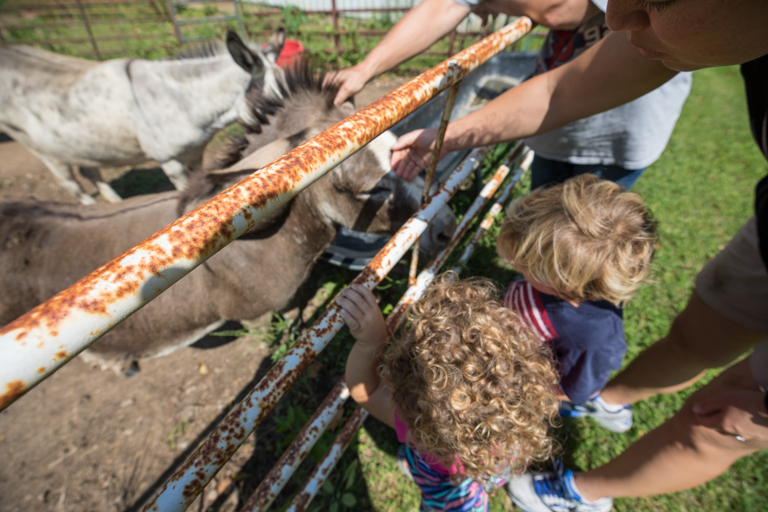 Just up the driveway were all the rest of the animals. Including a couple llamas. 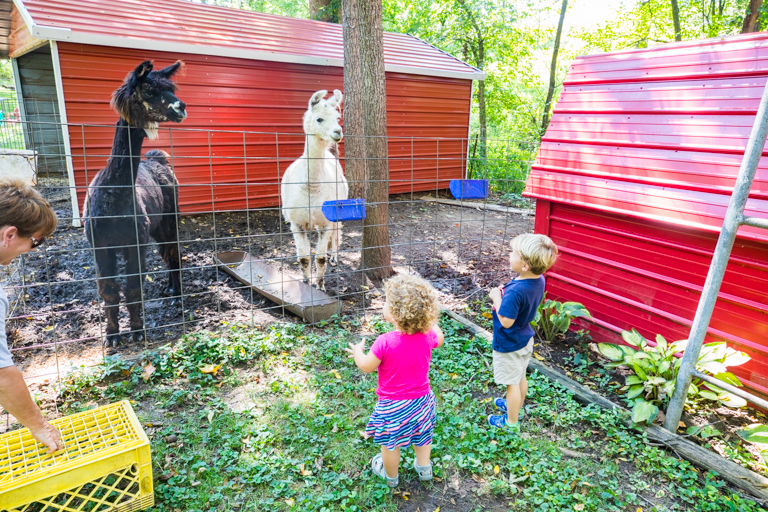 Pat, Melanie's husband, brought out a bucket of feed for the kids to give the animals. Ambassador the llama enjoyed it. 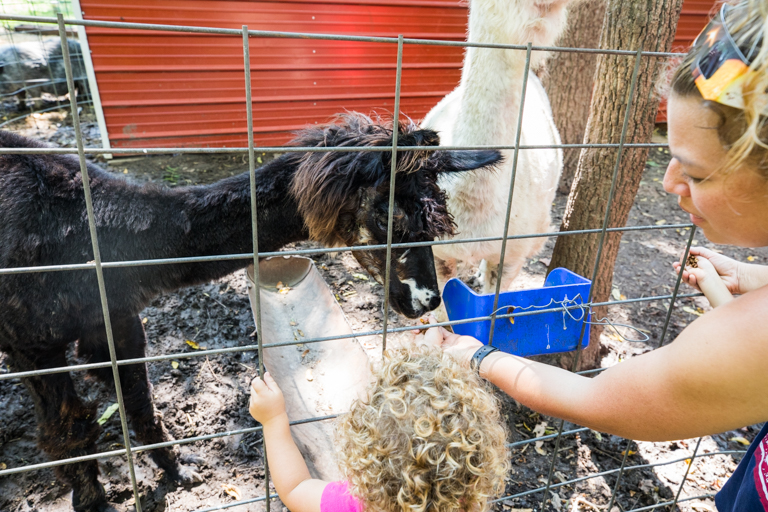 And Ian got up close with Luna the sheep. Ian had such a great time feeding the animals. He'd grab a handful of feed, run over to an animal and give it the food, then sprint back to the feed bucket for another handful. 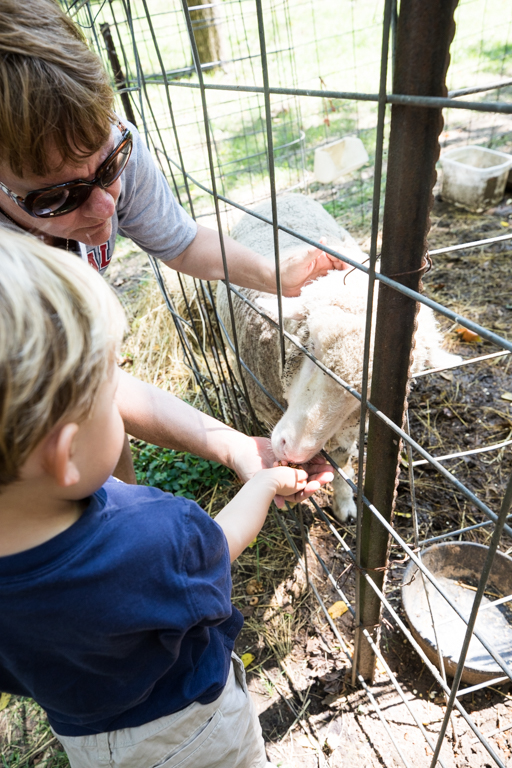 James the pig liked crackers more than the feed. And Roscoe the dog was quick to snag a cracker if James was taking too long. 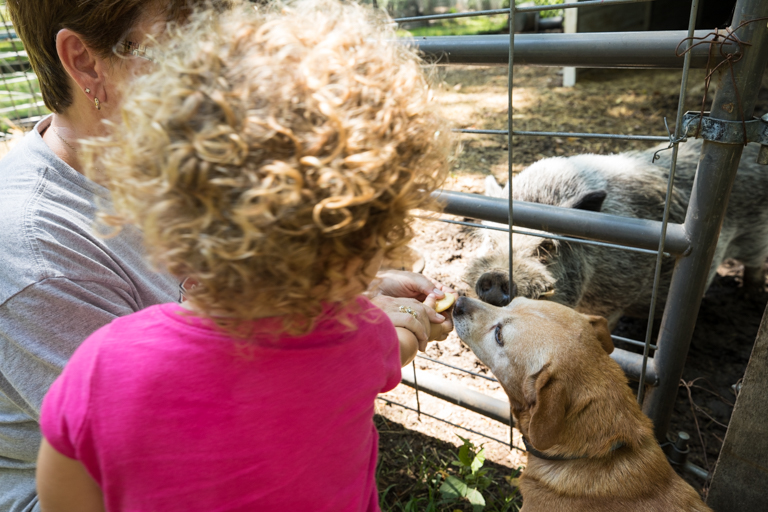 There you go. He was very gentle, sticking his tongue out to lick the crackers out of the kids hands and not biting it out. 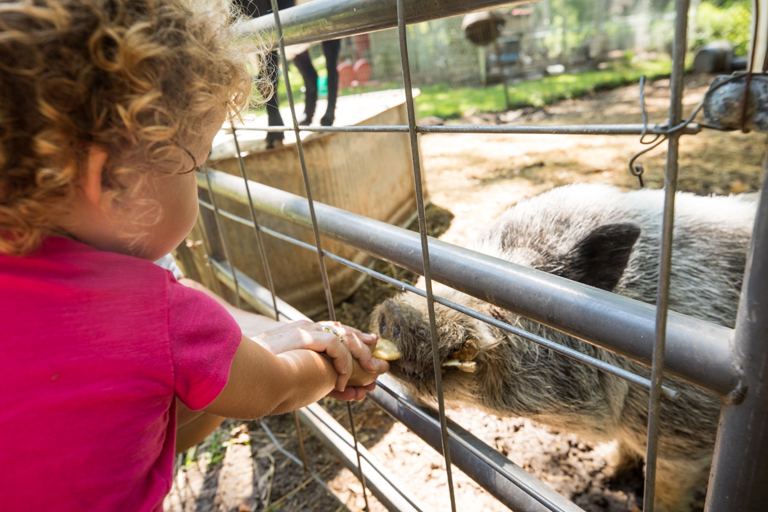 I gave his head a scratch. He feels just like a paint brush. 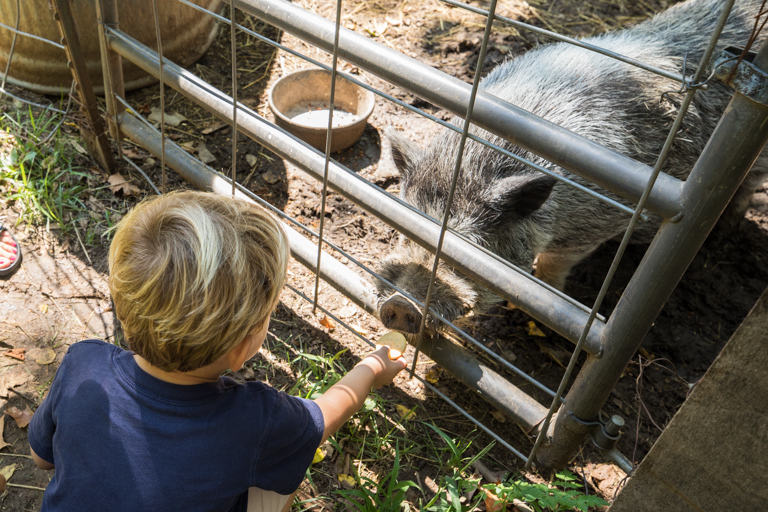 Time to feed the goats! We've missed the goats being gone from Disneyland, ever since they removed the Big Thunder Ranch petting zoo. Alli was trying to feed them crackers one at a time. At one point Melanie gave Alli a stack of crackers and Alli was just a little too close to the goats. One of them happily grabbed all 5 crackers out of her hand at once. 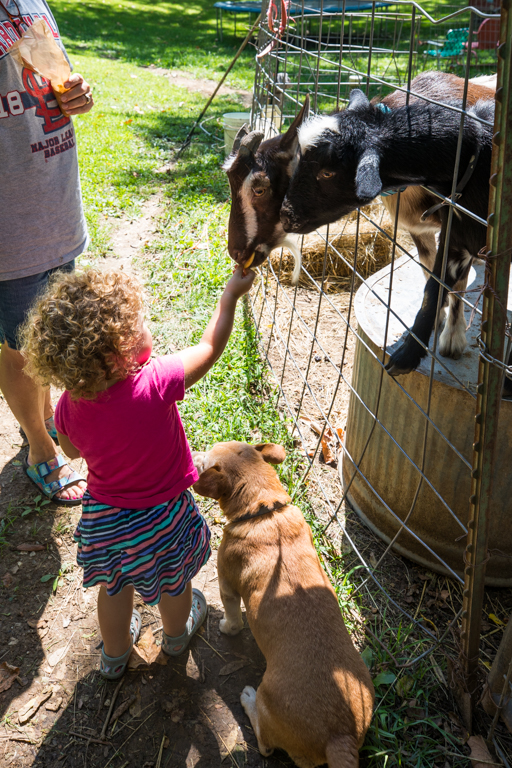 Over by the chicken coup we found chickens, ducks, and even a peacock! Melanie, you've got so many animals! 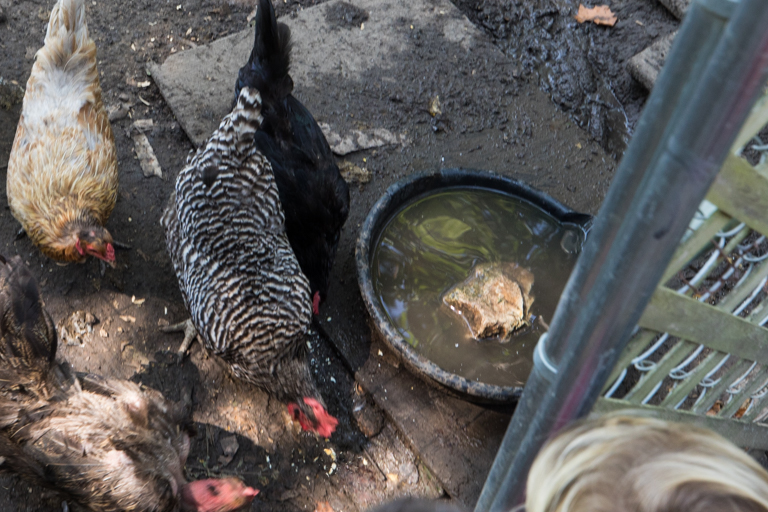 And where there's chickens, there's usually eggs too. Melanie let both kids gather up some eggs. 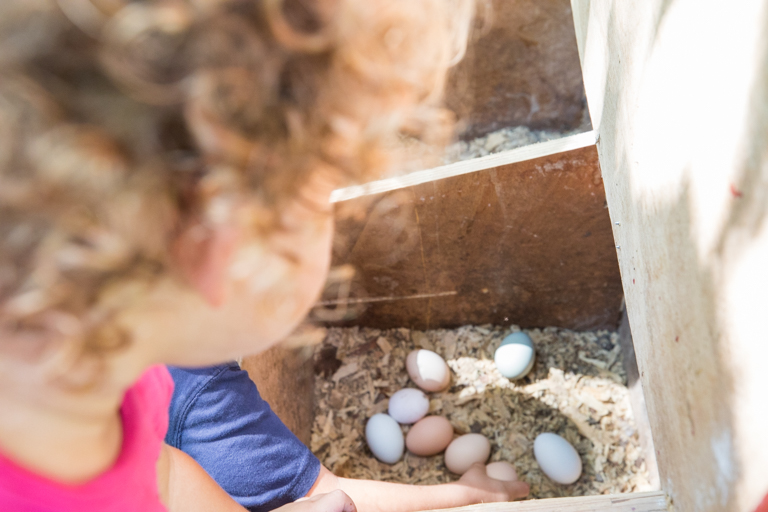 They're still warm from having a chicken sitting on top of them. 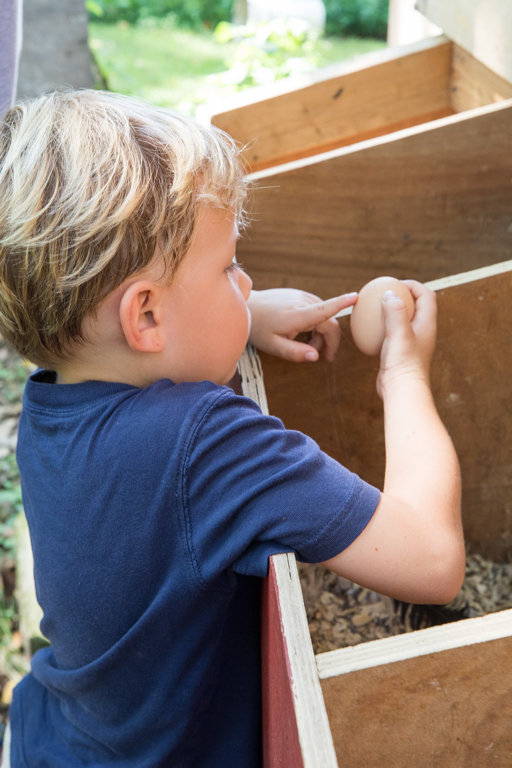 The dogs were both happy to get an egg treat from the kids. 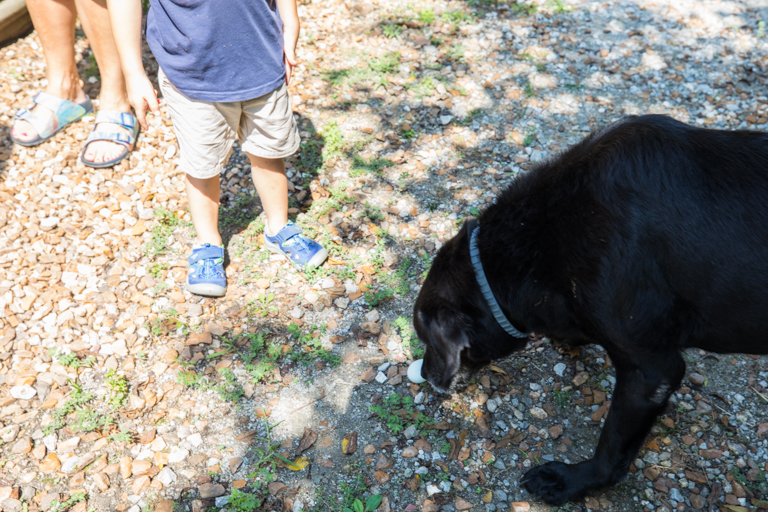 Ian spotted these tomatoes growing near the house. Please may I pick a tomato? Tomatoes are one of the few things we grow back home, and it's a special treat when one is ripe enough to finally pick. At home Ian and Alli have to take turns when there is one ripe enough to pick. Here Melanie let them both pick a handful. And gave us a baggie to take them home in. We cut them in half and they both ate them with their dinner. 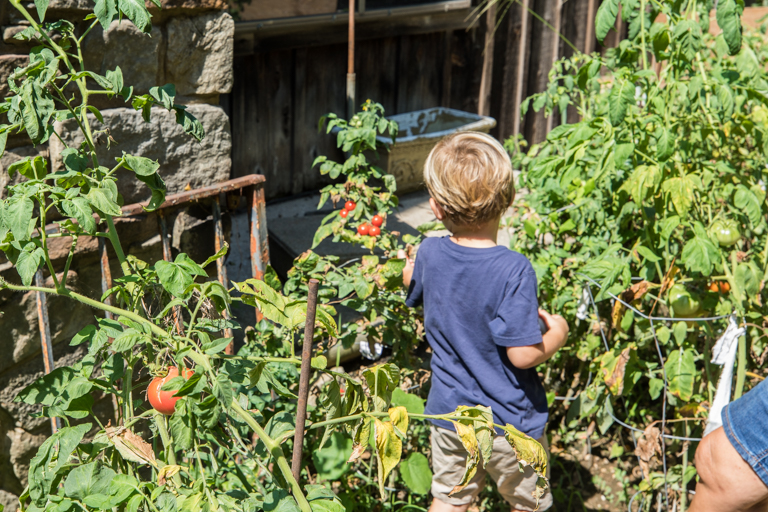 Surely we're out of animals. Nope! Beside the house was a koi pond. The kids got to feed the fish. It was mentioned that there might be a frog in this pond too. Try as he might, Ian couldn't find any frogs. 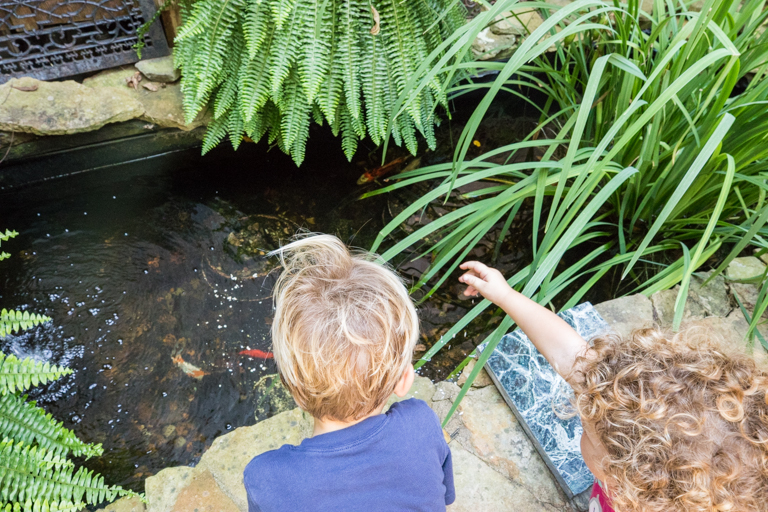 So of course Melanie pulled out the tree frog that lives in a little house on their front porch. 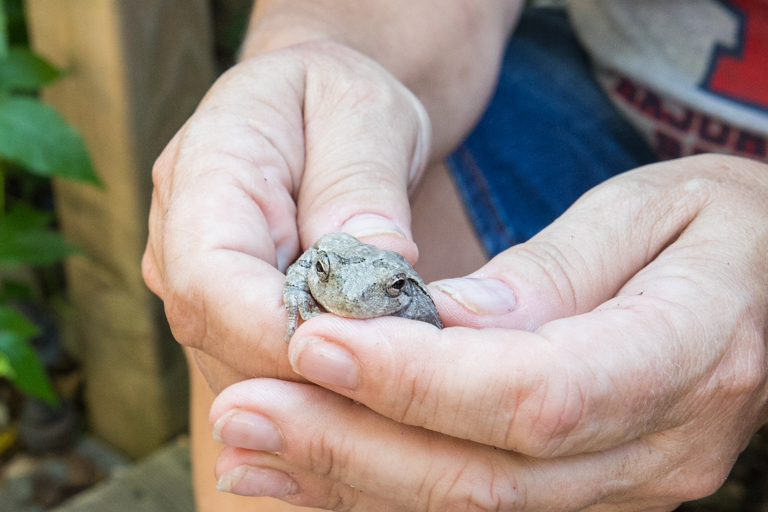 Ian touched its soft skin and rubbed its belly. And even let it crawl on his shirt! Alli saw Ian doing it and wanted to do it too. But as soon as the frog was on her shirt, she was ready to have it off. 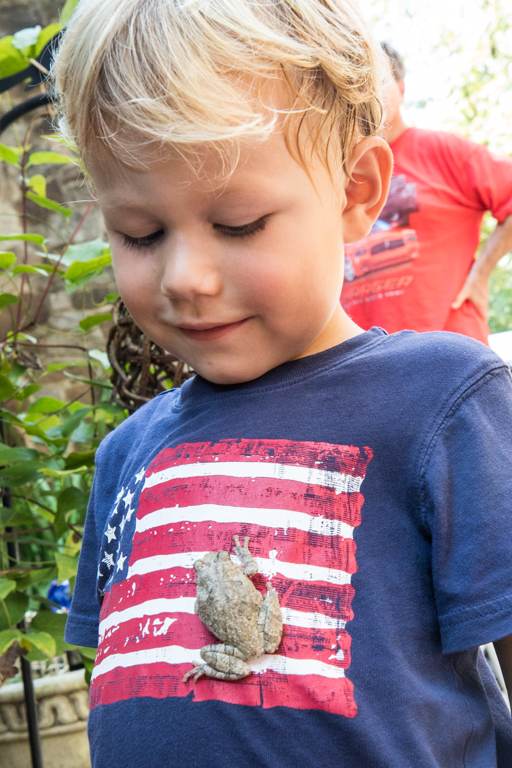 For the last animal...
Just kidding. The snakes are plastic. Ian still picked one up though. Loves those animals. 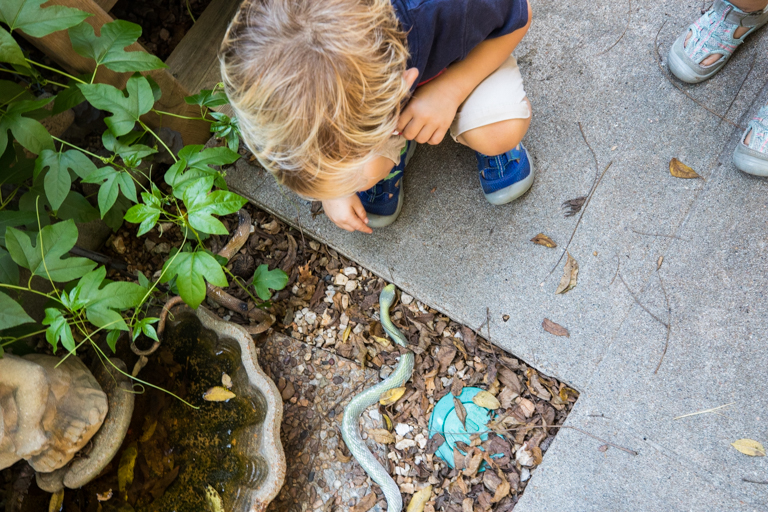 Thank you so much Melanie and Pat for inviting us, a family of complete strangers, over to your house. The kids had such a great time seeing, touching, and feeding all your animals. I feel like we could have spent the entire afternoon with you if we didn't have to get back home to our hosts. And if our travels do bring us back out that way, we'll let you know.

Time to hit the road again. No surprise it was crowded. Not as bad as some places. At best our drive could have been 1:40, but was 2:30 instead. Thankfully both kids were exhausted from the day and fell asleep for almost the entire drive back home. 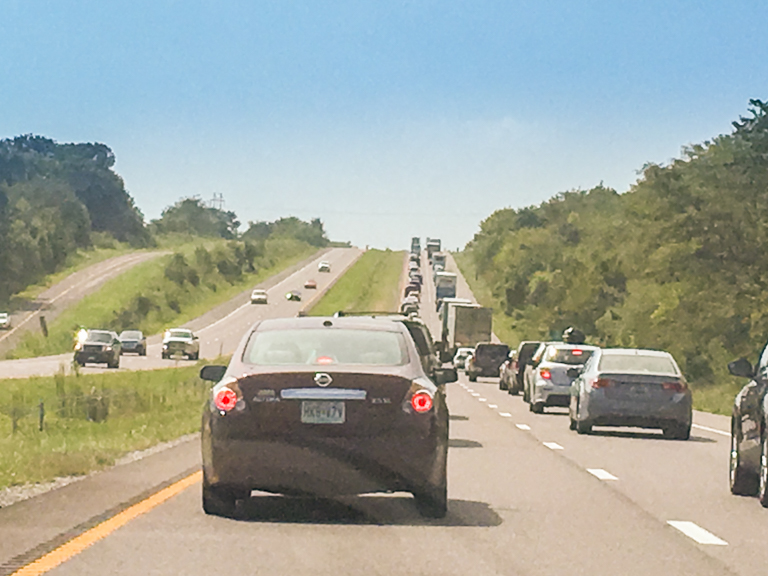