The Labors of Theresa

It was an early Sunday morning. We woke up at a normal time and today Theresa was really wanting a good breakfast this morning, so we made homemade belgian waffles. Pair that with bacon, eggs, and juice and we are eating like kings.

Around 10am, Theresa started to have some pain down below. Looks like contractions are starting! They're only 9-10 minutes apart right now so we can't head to the hospital just yet. Instead, we spend the day getting ready and watching Sunday football. At halftime of the Broncos game, Theresa was feeling even more uncomfortable so we decided to walk around the neighborhood. We had a lot more frequent stops as T started having more pains, including one break where she sat on a retaining wall for a while. We got back home and finished the Broncos game while T tried to get comfortable. Around 6pm she said the contractions were frequent enough to head to the hospital, meaning they're 4-5 minutes apart. All our stuff is already packed and we're ready to go.

One of my big worries about getting to the hospital was traffic. I was so worried he'd come around 4pm on a Friday when the traffic on the freeways was jam packed. But instead, we were on the road by 6:30pm and again we had great traffic since it was a Sunday night. 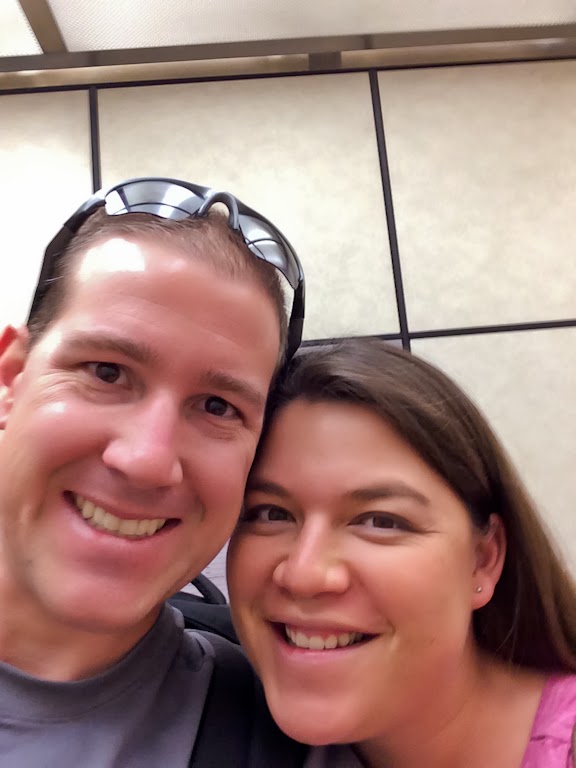 T didn't have as many smiles because she had quite a bit of pain. We got to the maternity check-in and they put us in one of the receiving rooms. 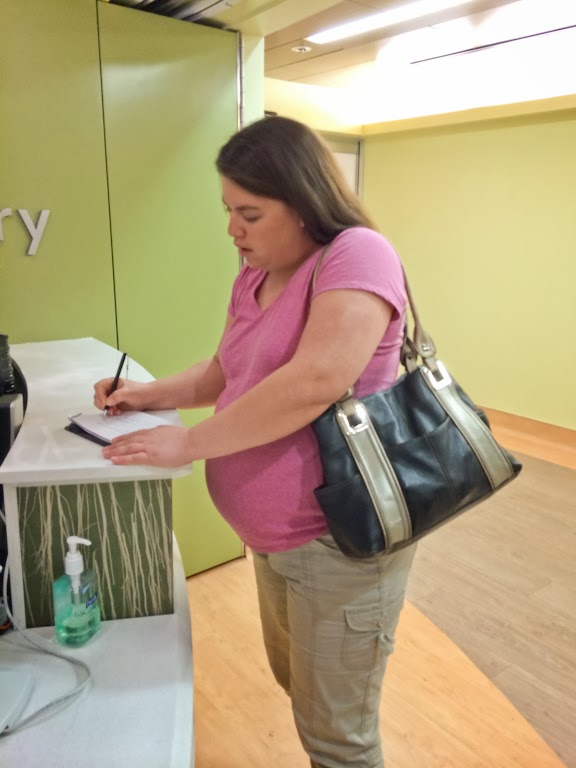 Back in the receiving rooms, T got changed. The TV was already on in the room and it was tuned to the Sunday night game. The perfect thing to keep T distracted. 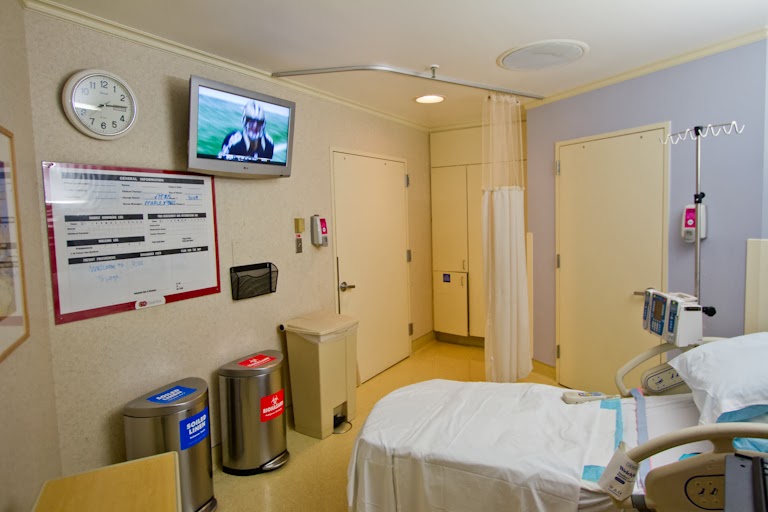 She got hooked up to the monitors and sure enough, the contractions were coming every 3-5 minutes pretty regularly. T's starting to get some pretty good pain whenever the contractions hit. The doctor on call that night came by and checked her out. Verdict... Only 2cm. They explained to us that they don't like to admit maternity patients until they hit 4-5cm which is what usually happens when the contractions reach that point. No luck for T though. They told us we could either head home, try to get some rest and come in the next morning, or we could wait at the hospital and see how it progresses. T wasn't going to be able to sleep through the contractions and home is pretty far away. Not only that, but we're already at 3-5 minute contractions, so really what additional signs are we waiting for? They left us to our own devices and we spent the night trying to get through contractions. 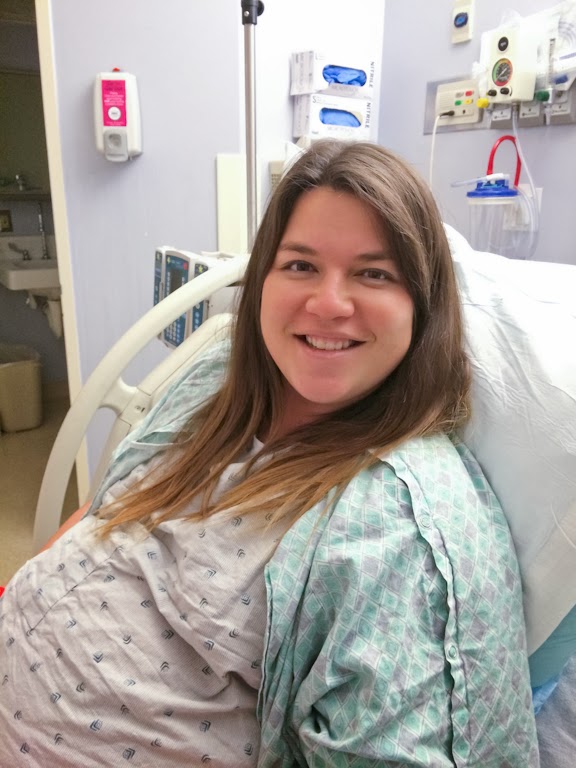 We walked the halls to help progress the dialation. T also took a couple hot showers, leaned on the bed, leaned on me, and was pretty much miserable most of the night. At this point she's not an official patient of the hospital and hasn't been admitted yet, so they won't give her anything to help with the pain. We're doing breathing exercises, I'm rubbing her, and we're just trying to get through it. For her, it was really bad lower back pain. We'd figure out why that was a bit later.

Around 2:30am, the doctor came back in, checked her again and said we hadn't made any progress and that she was still at 2cm even though she's been having contractions the whole night. The doctor said T's obviously in pain and that even though she's not where they like to see patients when they admit them, that she would admit her as a patient if she asked.
By this point, the contractions were coming every 2 minutes and even in the downtimes, her pain level was really high. She just couldn't get any relief and was happy to be admitted. It took a little while to get through the admission processes, but by 3:30 we were officially admitted and walked over to the labor and delivery room. 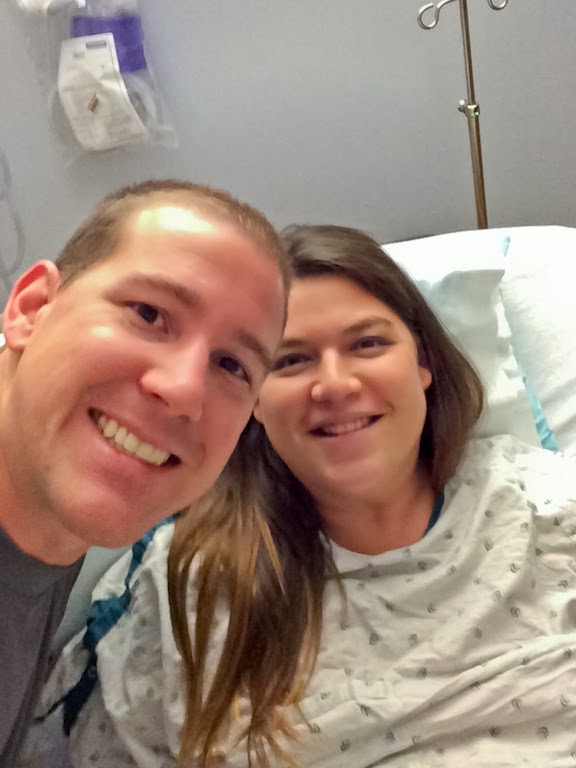 T was really in pain and with no relief was wanting to get that epidural. She had initially thought of doing it without, but the pain was too much with no down time to recover. Good news was though that before they did the epidural, she was checked and measured 3.5cm. At least we're getting some progress.

At 4am the anesthesiologist came by and took care of the epidural. T was more than relieved to finally get it. It kicked in after a few minutes, and even though the monitor was showing some pretty big contractions, she wasn't feeling anything. Finally she was able to get some sleep. 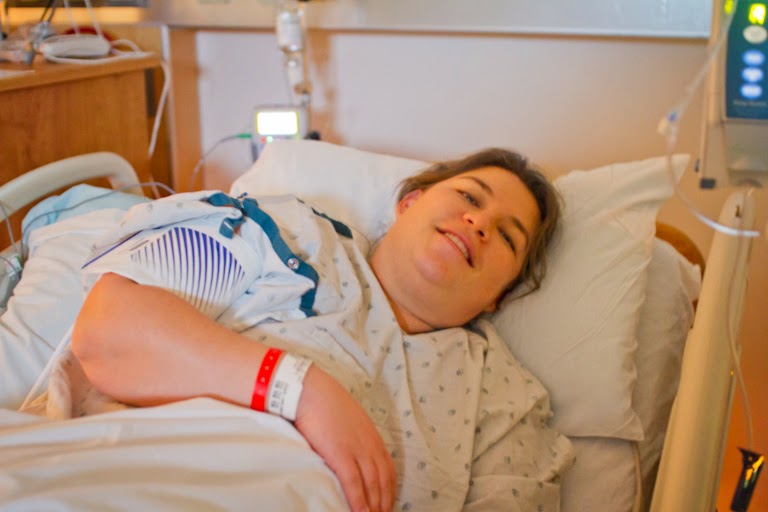 Along with an IV and the epidural, T also was put on a drug called petocin which is supposed to help with contractions. When they checked T around 5am, she was at 4cm. Not progressing quite like what we were hoping for, but praise all progress. T got some sleep and I slept when I could on the couch beside her.

At 7am the awesome day shift nurse Wendy came on. She kept trying to play with meds to step up the petocin and get the contractions to start coming harder and more frequently. But baby boy had other ideas. Turns out he's pretty happy where he is and doesn't like to get rushed. When the dose was stepped up, his heart rate started to become erratic and drop out. Also just like before, when T laid on her back, his heartbeat started to dip. That meant T stayed on her side flipping back and forth and the thing about epidurals is that they work best when you're flat. If you lay on your left side, your right side starts becoming less numb. As the epidural wore off, T called the anesthesiologists back in a few more times to give her something stronger. 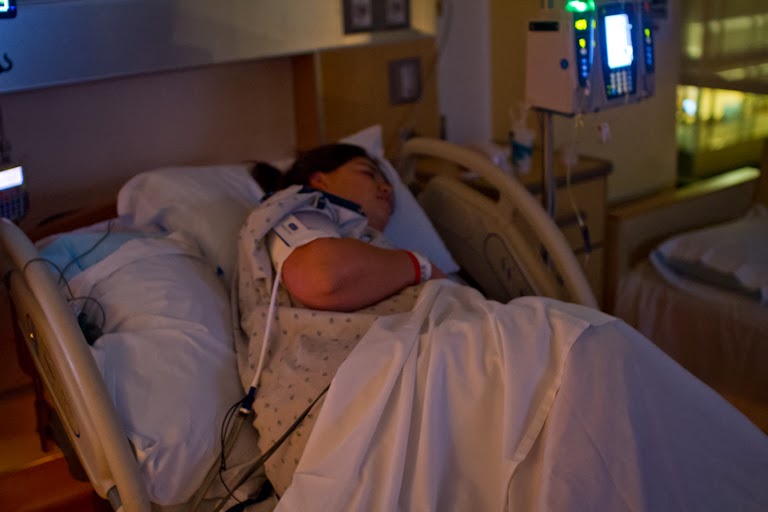 At noon T made it to 6cm and we're seeing more progress. Unfortunately every time they step up the petocin, baby's heart rate floats around. She's getting contractions every 60-90 seconds but luckily she can't feel it. She's also confined to the bed because the epidural they've given her is so strong. She's on oxygen too because they baby seems to like that. Theresa spends most of the day sleeping. She's a little worried because his heart rate keeps dropping out, but they're keeping good tabs on us and we have some excellent nurses.

Maybe around noon she was up to 6cm then by 4pm we were at 8cm. This is all going very slowly, but at least we're here.

During the day we got a phone call from Theresa's primary doctor Lily Lee and she tells us she's not going to be there for the delivery because she's got a birthday dinner. One of her partners is going to be delivering her tonight. At this point, we're just happy he'll be coming soon.

At 6pm I think T finally made it to ~9.5cm. Only problem was there was still a small lip on her cervix that just wasn't clearing the baby's head. Once it did though, we could try to push. 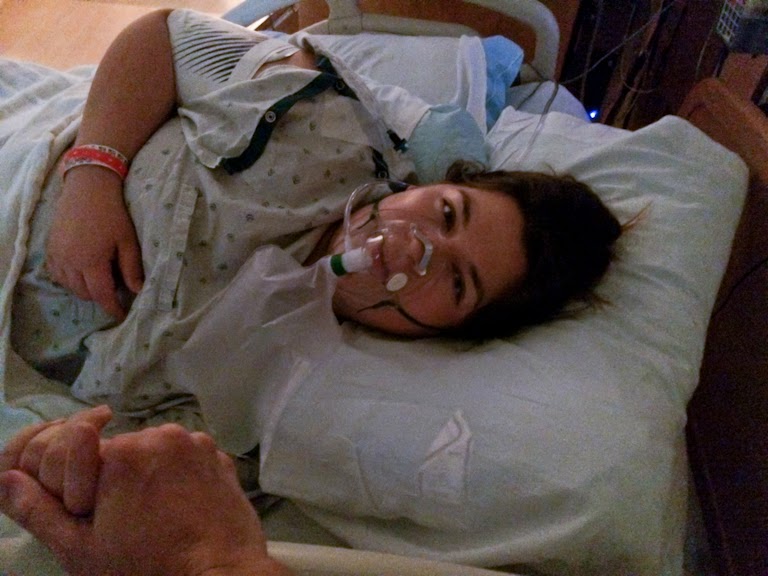 Also they noticed that instead of the more traditional delivery with the head facing backwards, his head was facing forwards. The shape of his head then causes an intense pressure on the tailbone and makes it hard to fit through the pelvis. No wonder T was in such pain the night before. Not only was his head facing the wrong way, but his body was awkwardly turned inside her too.

After a couple hours at 9.5cm, T wasn't progressing any further. Dr Wilson (Lily Lee's partner) arrived around 8ish to check in with T and explain our options. Even though his head hadn't completely cleared the cervix, we were going to try to push. Dr Wilson said she normally likes to dose down on the epidural so you can feel what is happening down there.T wasn't too thrilled with that, but I guess we don't have much choice. They halved her epidural.

Both the doctor and the nurse checked T around 8:45 to see if she'd progressed, but no luck, still 9.5cm and the lip was still there. We're going to try to start pushing anyway. Theresa assumed the position, the doctor got down below and as the contractions showed up on the monitor, Theresa started pushing. Theresa was getting some really good pushes in, but after every one she went back to 9.5cm and the lip kept going back over his head. After about a half hour of pushing, the remaining lip started to swell from being pushed against. There was no coming out regularly now. The doctor said we'd have to do a c-section.

Bummer after 36 hours of labor and all that pain, starting at 10am the day before, it's going to come down to a c-section. 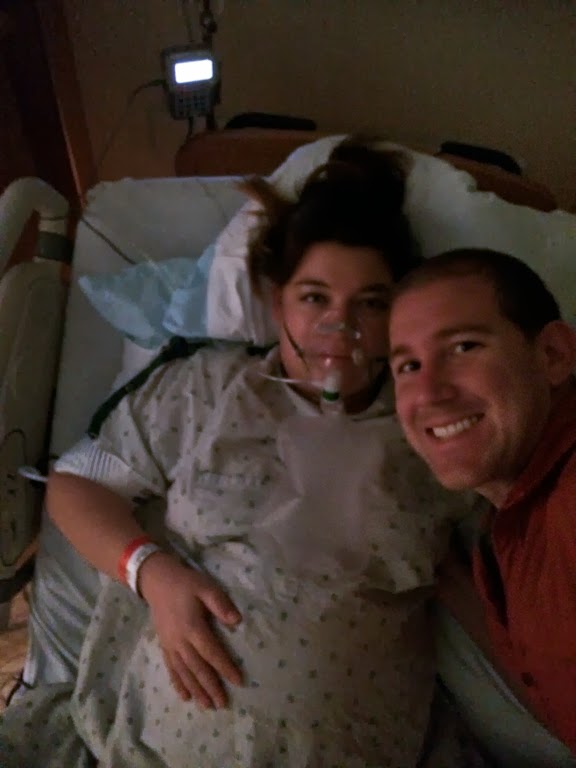 The anesthesiologist came in and upped the dose of the epidural and we waited. The operating room was currently being used for someone delivering twins. After that, they said said another lady was in labor and having complications so they were holding the room for her just in case it went to that.
Finally around 10:45 we were told it was our time. Theresa got prepped in the room and I got dressed out in a bunny suit so I could be there with her. It's finally time!

We'll continue the story from there in the next post.
Posted by Joe at 7:31 PM