It's the last day of our Huntington Beach trip. Let's see what we have in store for today. 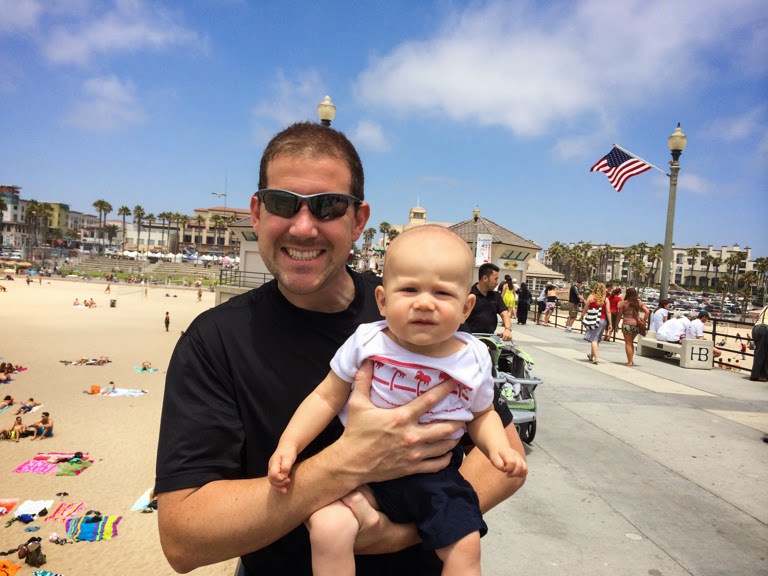 Someone was a very good sleeper last night and didn't wake us up until 8am. 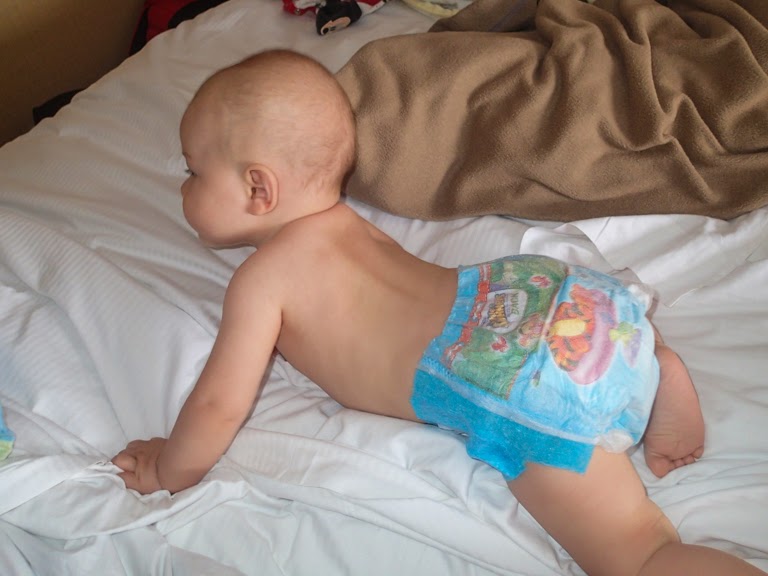 Theresa and I were both excited to take Ian for his very first swim! Do these shorts look a little big on me? 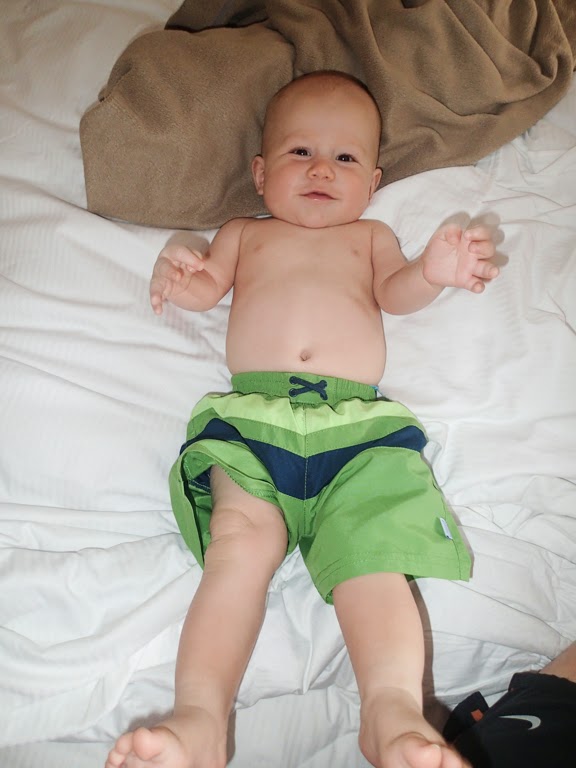 It's not that sunny yet, but we headed down to the pool around 9am. Ian's just lounging by the water. Little does he know what's going to happen next. 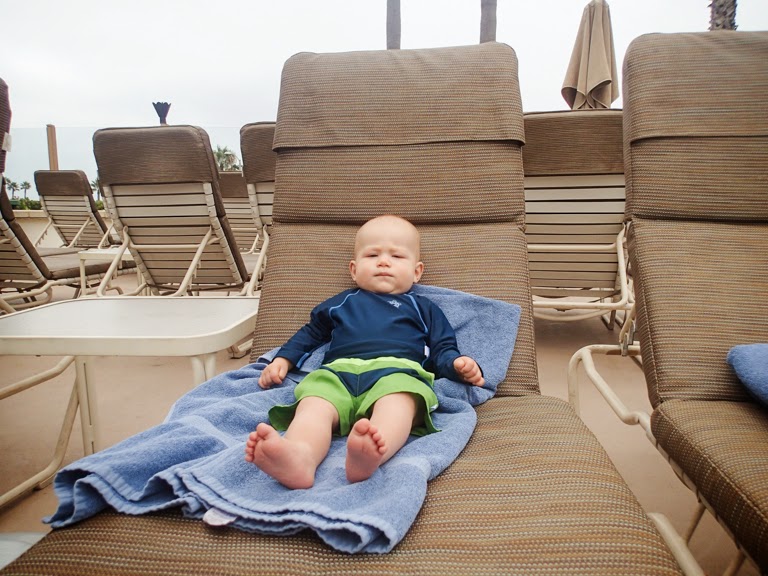 Thankfully the Hilton keeps their pool heated and to me it felt like it was in the mid 90s. It was very comfortable and not a shock of cold when you first get in. I'm sure Ian really appreciated that. He doesn't look too sure about this big blue thing we're stepping into. 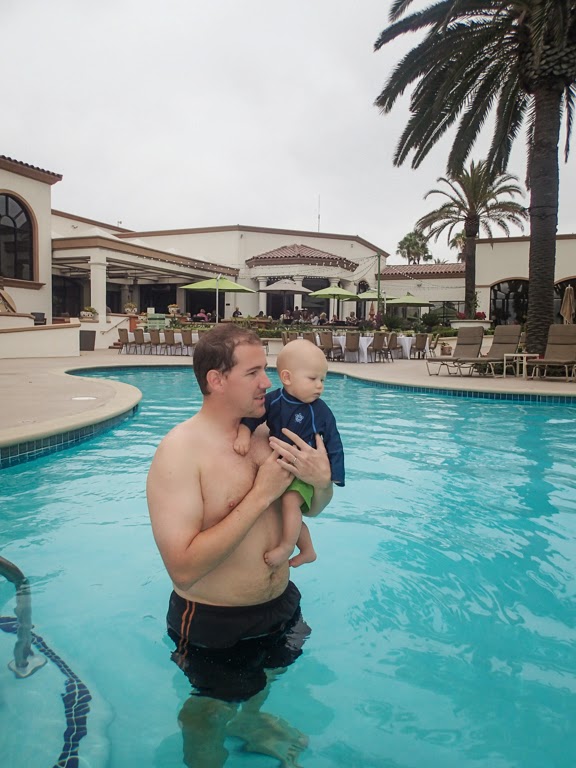 First we started by dipping the toes in the water and kicking them around. 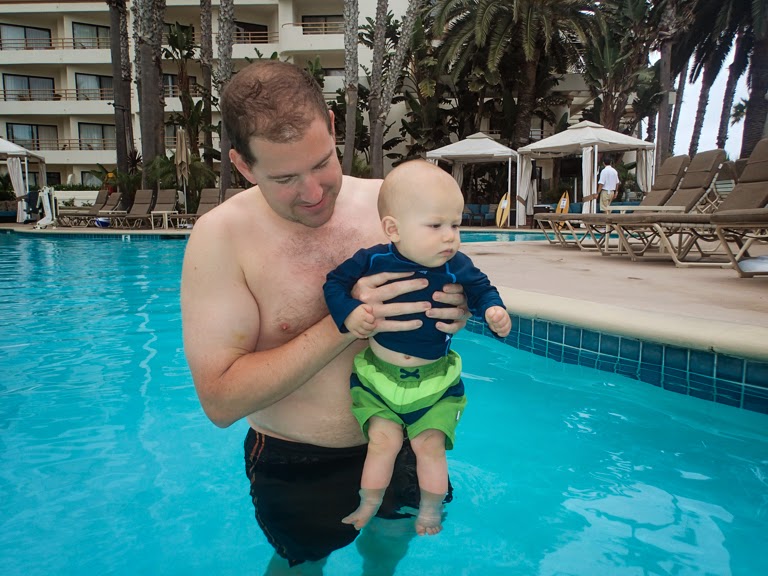 Then we continued going all the way down to the shoulders. 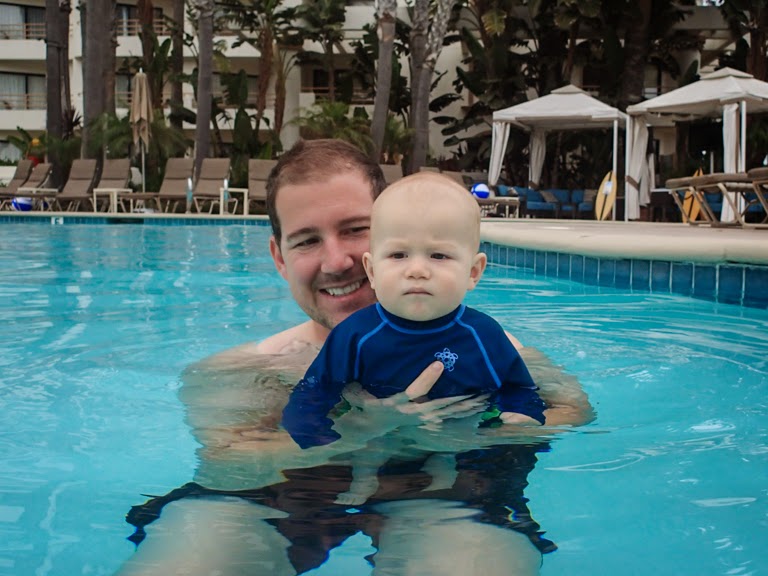 Theresa and I passed him back and forth in the water. Eventually he started splashing his arms. 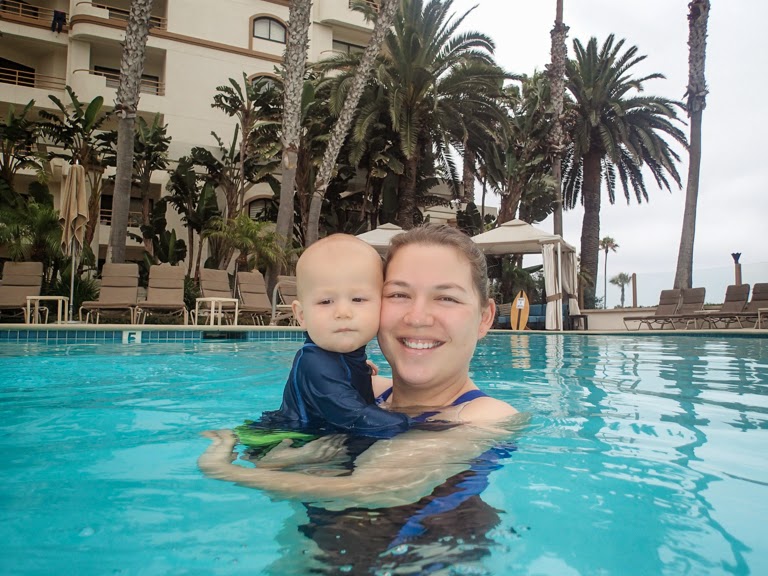 Doing a little practicing floating on his back. He didn't really like this position at first. Getting water in his ears seemed to unsettle him and he wanted to sit back up. 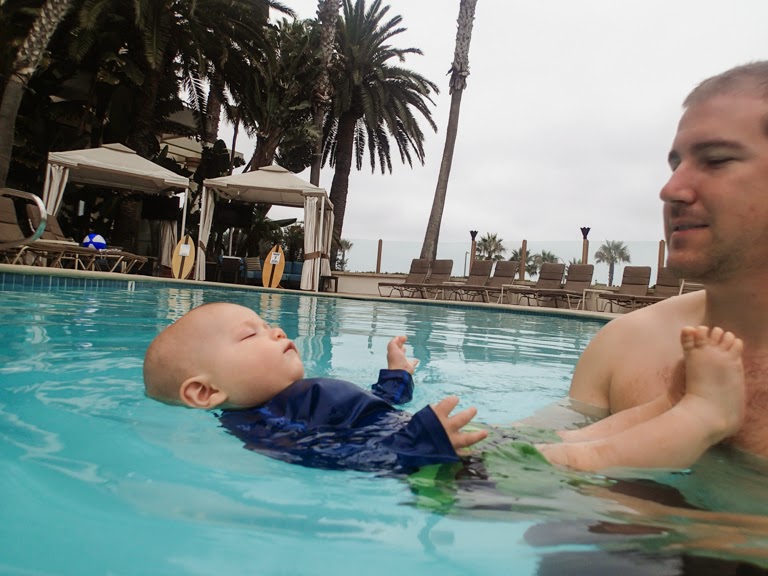 He liked being pulled along going forwards though. More than once he opened his mouth to take a drink of the water... 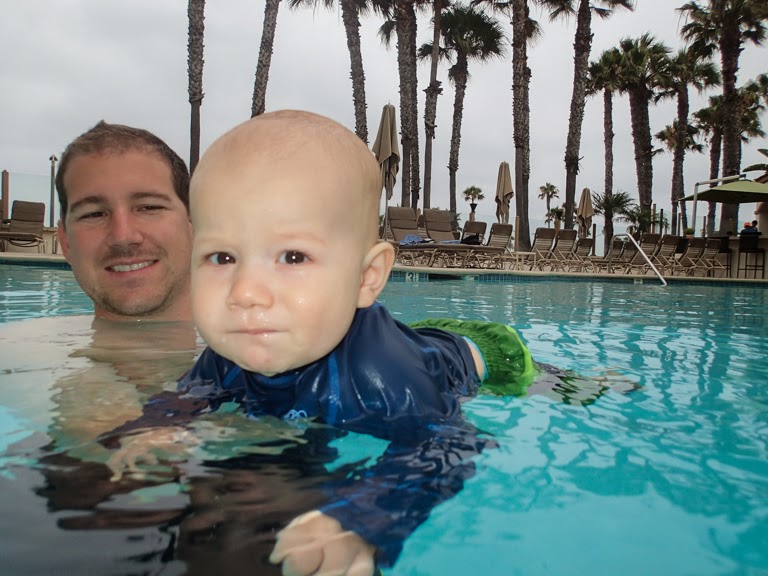 The best part about being there at 9:30am was that we had the entire pool completely to ourselves! 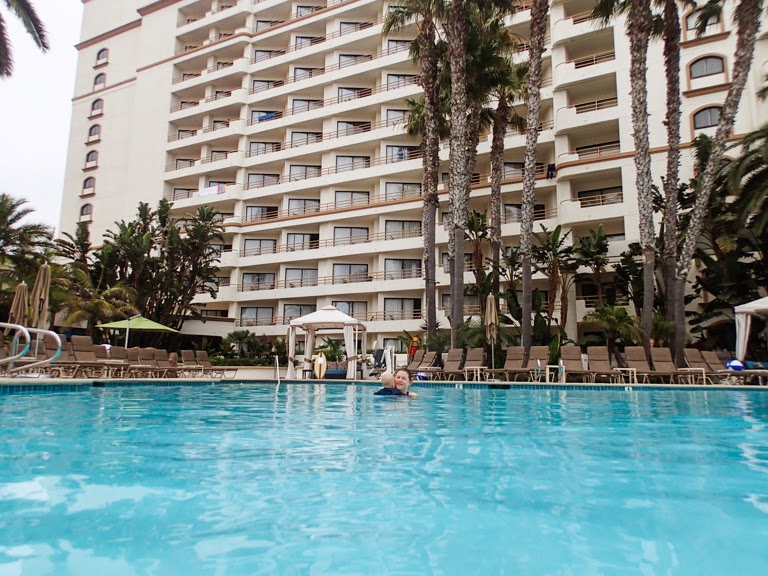 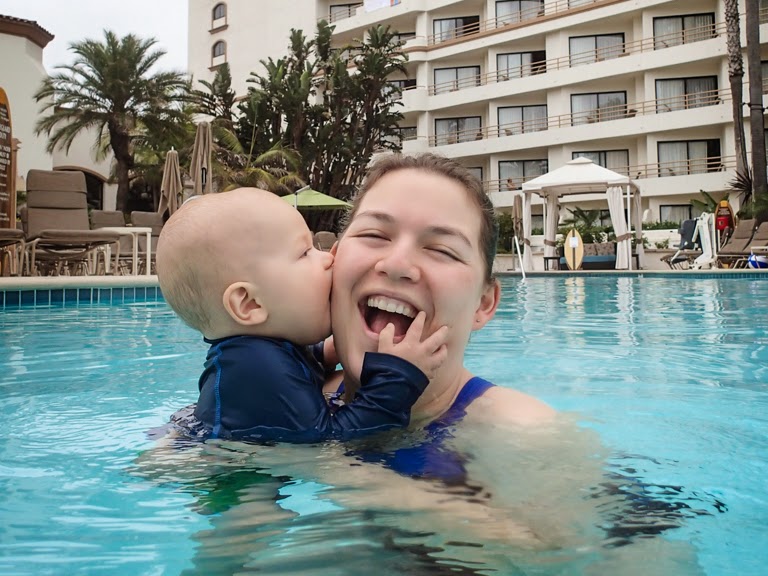 Alright, let's try something new; time to get dunked under the water. I had read previously that if you blow hard into a baby's face it will make them hold their breath. Right before I dunked Ian, I blew into his face and we took a quick dunk. He didn't particularly enjoy it, but he came away from it like a champ.

A short time later, I discovered a couple beach balls sitting around the pool. I knew Ian would be a fan and he didn't disappoint. All worries about the water were gone now and he just wanted to get to the ball. 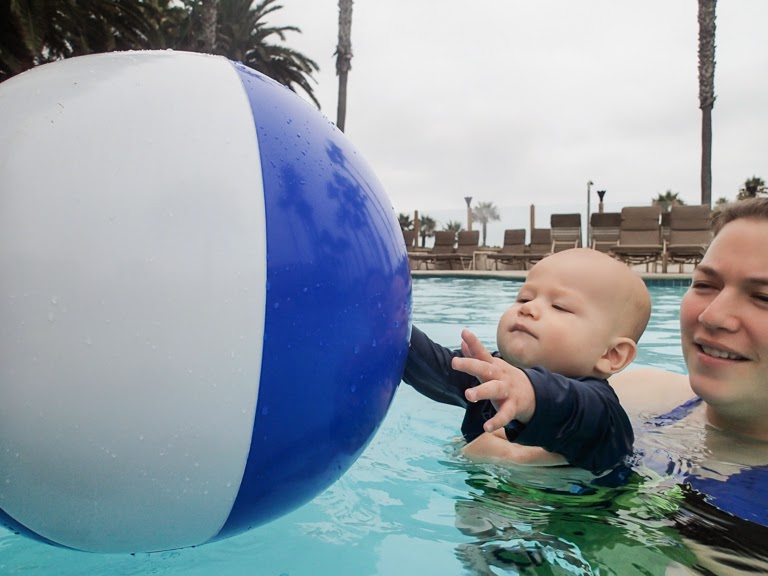 Only problem was, it was too big to hold with two hands. Ta-da, problem solved. I'll just use my feet. 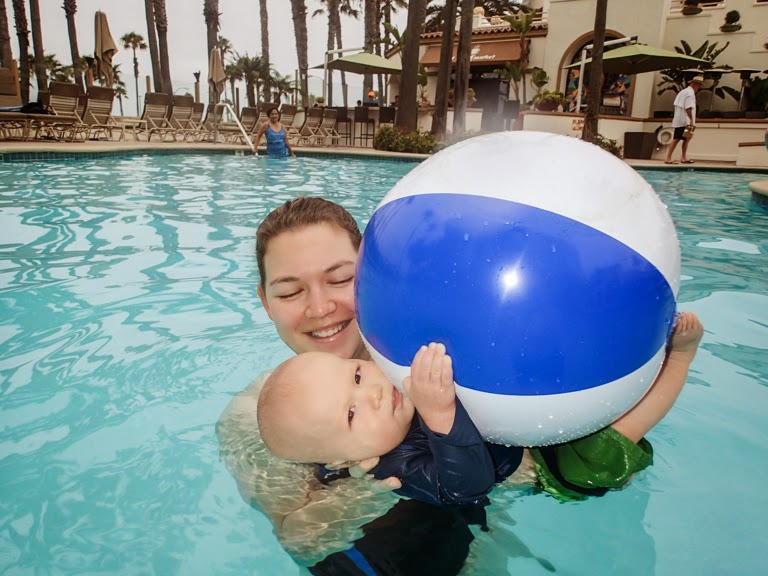 After a fun time in the pool, we bundled up in a towel, Theresa and I grabbed our free breakfast and we headed back up to the room. We all showered off, Ian went down for a nap, and Theresa and I ate breakfast out on the balcony again. 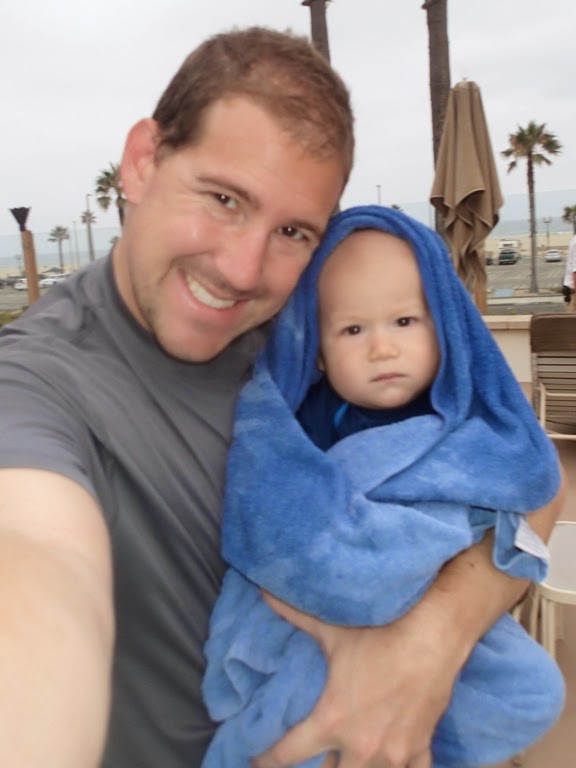 We asked for late check-out and were able to stay in the room until 1pm. I put all our gear in the car, loaded Ian into the stroller and took off on one more walk down to the Huntington Beach pier. 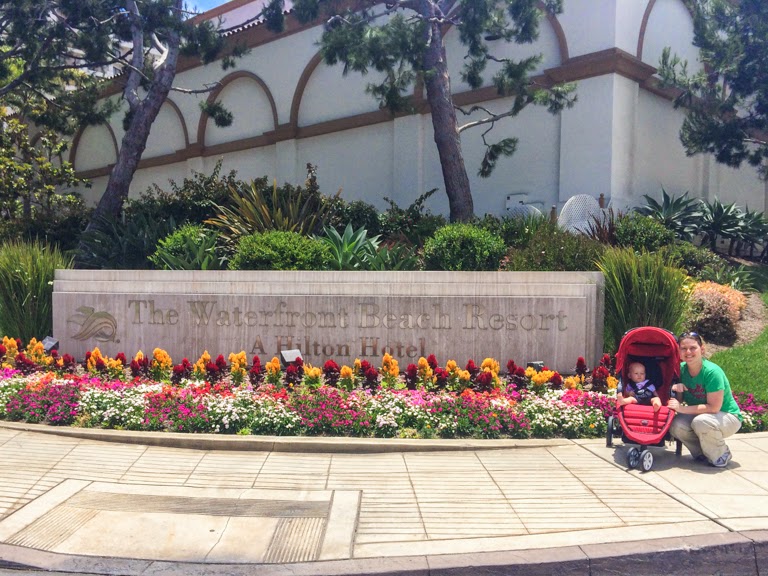 A sculpture near our hotel. 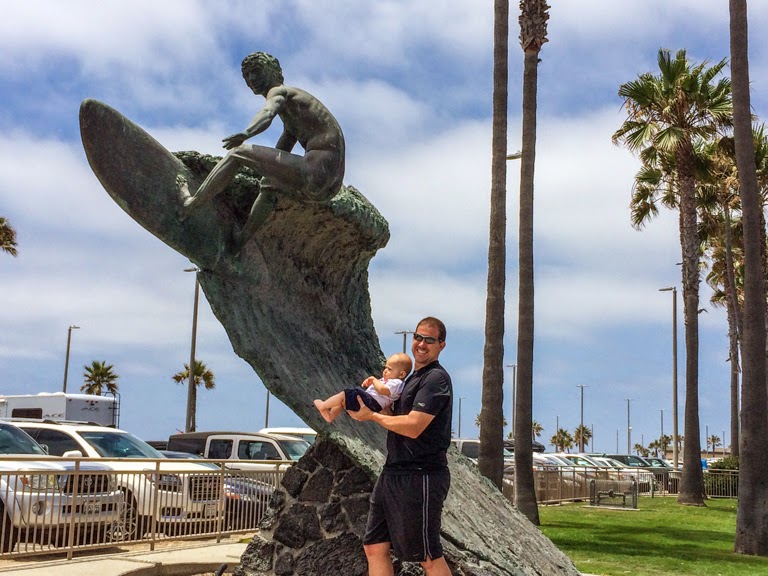 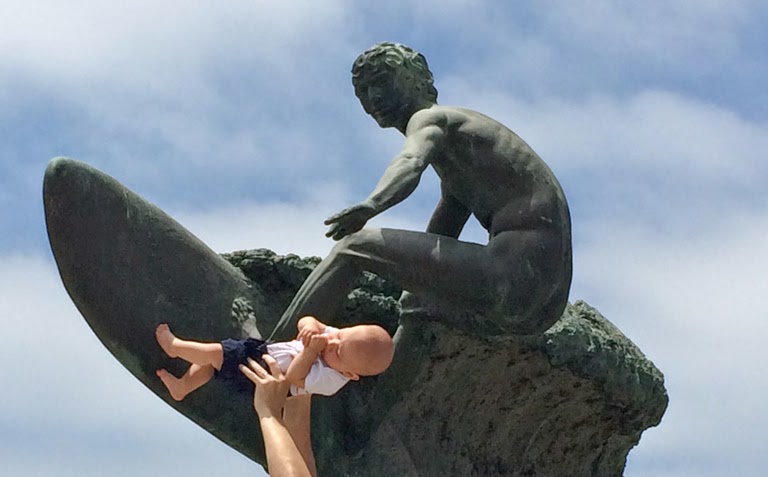 For being such a nice day, it was no surprise the beach was crowded.

Smile Ian! He's a little squinty. Maybe if he had some sunglasses...

Well no, I guess not. They went straight into his mouth. 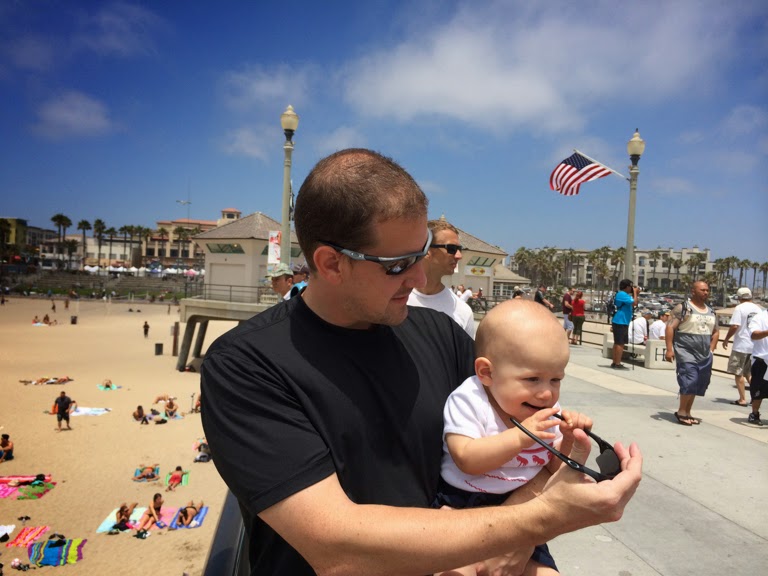 It was a relaxing day strolling along the pier with nowhere to be and nothing that had to be done. After walking the pier we walked through the nearby shops. There was one that caught my attention the day before with the delicious scents coming from it.
The Funnel House has tasty made-to-order funnel cakes and churros. There was a little bit of sticker-shock after seeing the prices, as it was more expensive than even Disneyland. $6.75 for a plain powdered sugar funnel cake and $4.75 for a churro.

But you'll never find a fresher churro. They extrude the dough right in front of you, twist it, and toss it right into the hot oil. 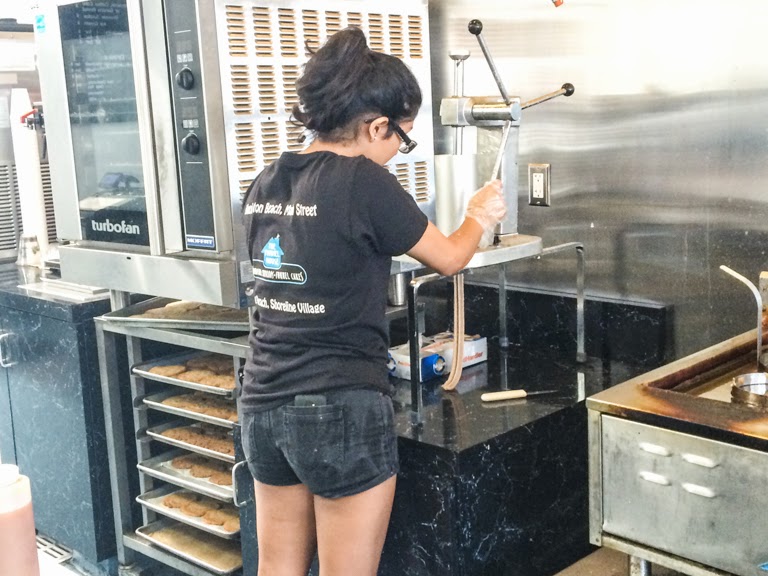 Delicious! It's hard to top a fresh churro. 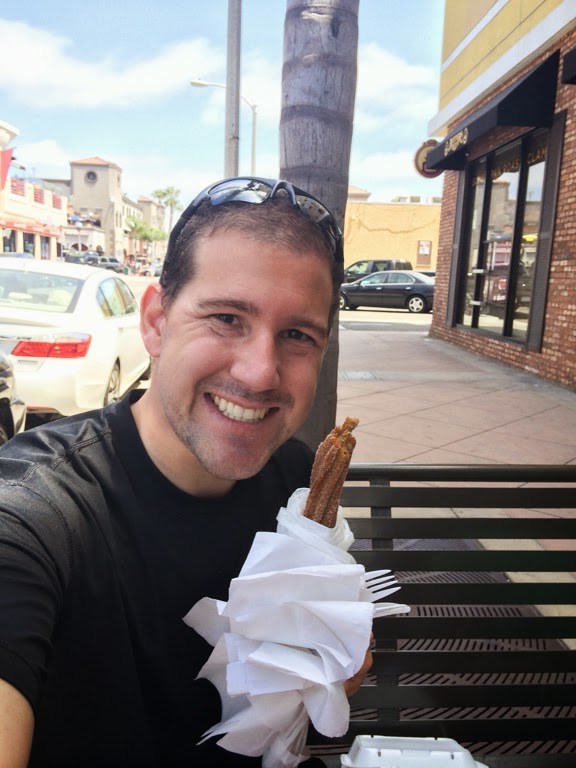 And Theresa enjoyed her funnel cake and let me eat a lot of it too. 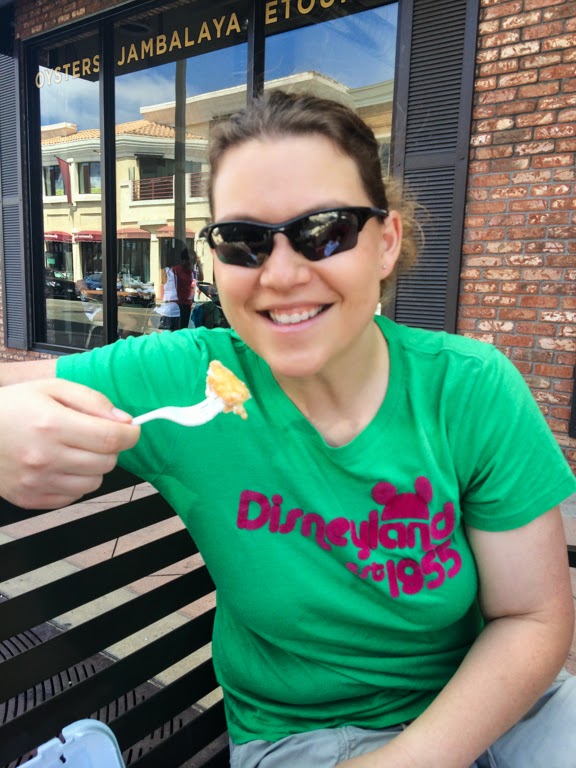 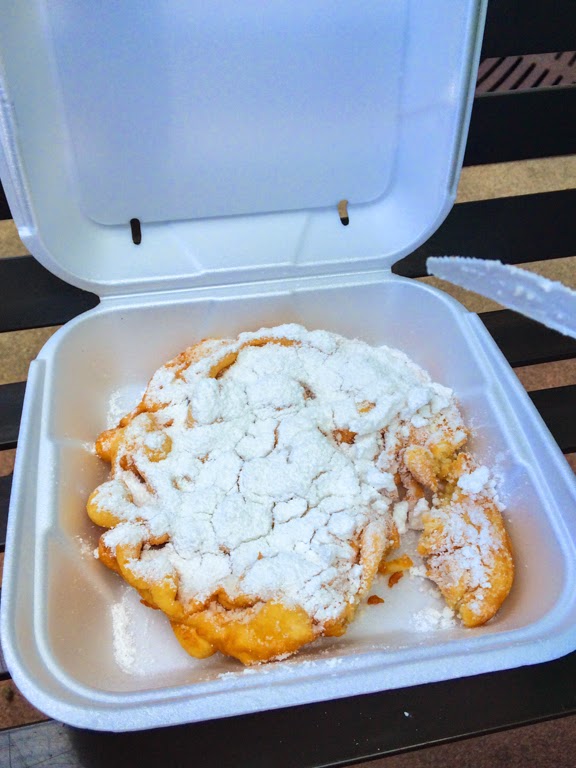 And Ian, well he got to drink his milk. Soon enough he'll be able to try these kinds of treats. 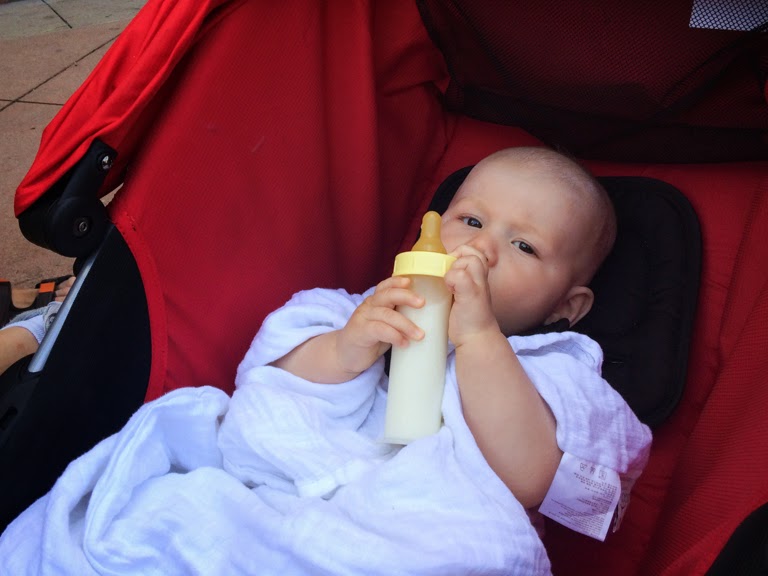 We walked back to the Hilton, picked up our car and jumped on the freeway to drive home. Ending this trip exactly how it started, Ian fell asleep for the ride. 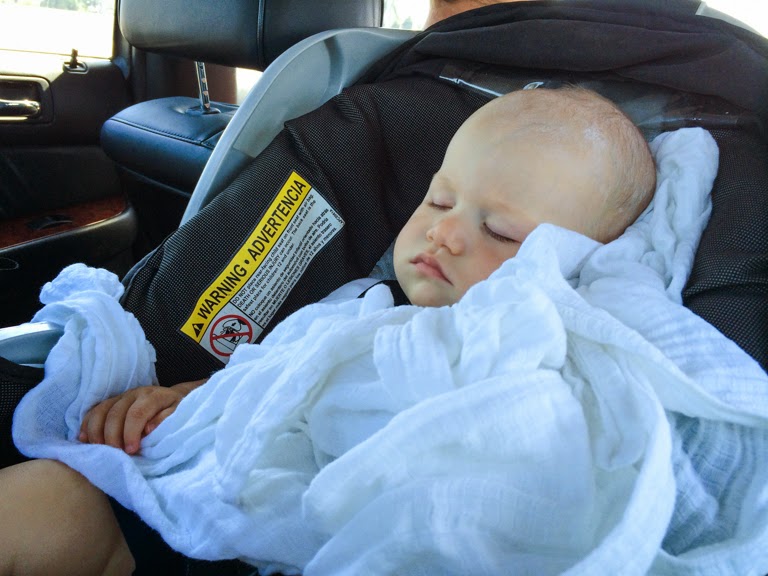 Well we had a great stay in Huntington Beach. It was our first real trip alone with Ian and while it wasn't relaxing, it was fun. It was nice being able to take everything we thought we might need for Ian on a quick get-away. We were able to figure out all the things we really used and on our next trip we'll be even better prepared. Hopefully we'll be able to keep taking less and less until we're back to our super light travel mode.
Until the next trip!