runDisney had some pretty big things going on last year. First they announce the Avengers Half Marathon at the Disneyland Resort and then on May 27th, they teased everyone with this image on their Facebook page. Oh boy. This is going to be huge! A Disney race with a Star Wars theme.

Shortly afterwards further details followed. The race would be held the weekend of January 16th, with a 5k, 10k and Half Marathon.  In addition to those events, there would be a special combination of runs called the Rebel Challenge, composed of running the 10k on Saturday and then the Half Marathon on Sunday for a total of 19.3 miles in one weekend. Those who signed up for it would get a bonus medal and a bonus running shirt.

Registration would be opening up 7 months in advance on June 10th at 9am.

Now all Disney races sell out quick, but this one was sure to go even faster than usual. On Tuesday morning at 9am I was at my computer and ready to go. Good thing too because within 30 minutes the Rebel Challenge was sold out! With ~5000 spots open for Rebel Challengers, runDisney took in a quick $1.6 million dollars. The 5k sold out in 60 minutes, the 10k in 100 minutes, and the Half Marathon sold out in just over 2 hours. It's amazing how quickly the events for the entire weekend sell out. These races might be expensive, but Disney certainly hasn't priced themselves out of the market.

Fast forward 7 months and it was time to go to Disneyland Resort and the Disneyland Hotel for the Star Wars Half Marathon Expo. I love how they have themed carpets as you're walking into the packet pickup. 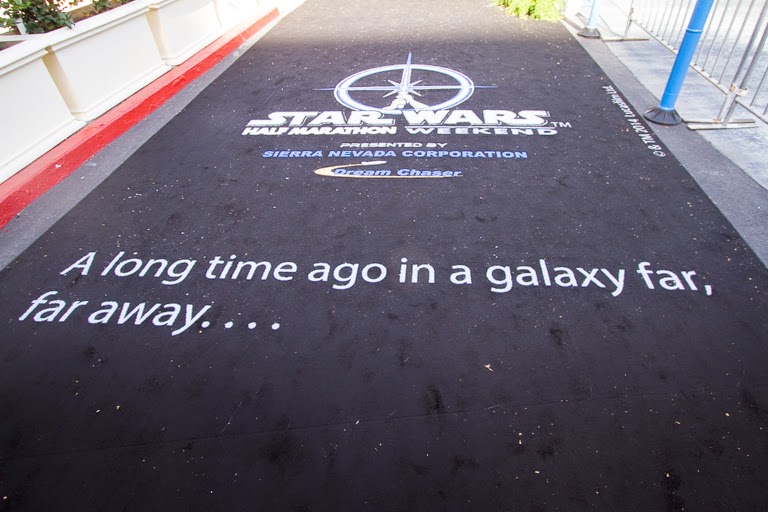 Packet pickup started on Thursday morning, but in order to beat the crowds I went at 11:15am on Friday. 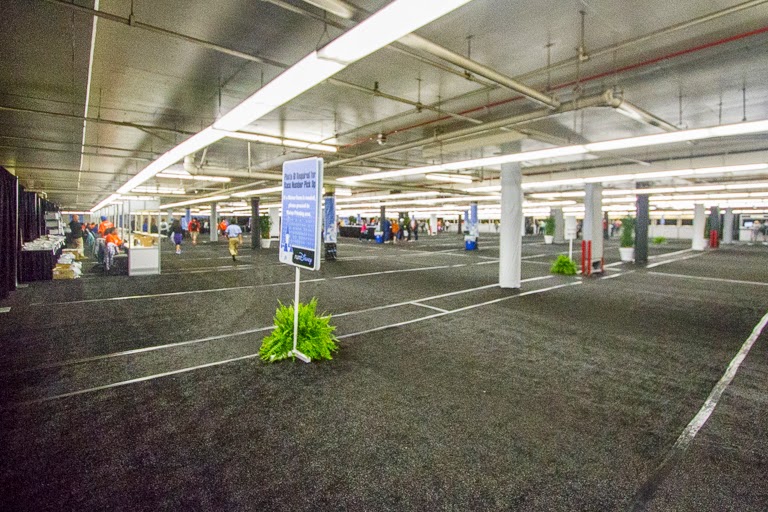 Looks like that was a good idea because I was able to walk right up and get my bib. 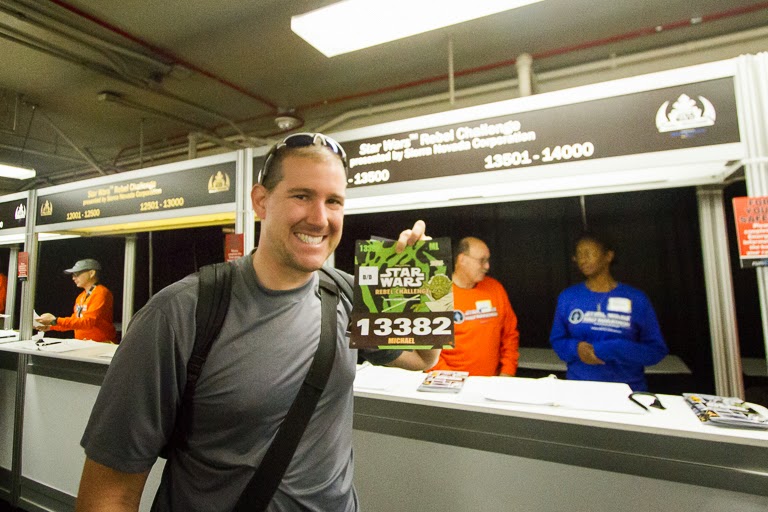 After picking up my bib, I was instructed to have my picture taken by one of the Disney photographers. This was new to me, but later I discovered after the race, they compared me to this picture before giving me my Rebel Challenge medal. 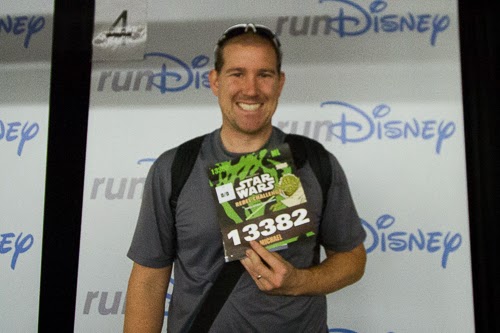 Walking up the ramp to go into the Expo was another themed carpet. 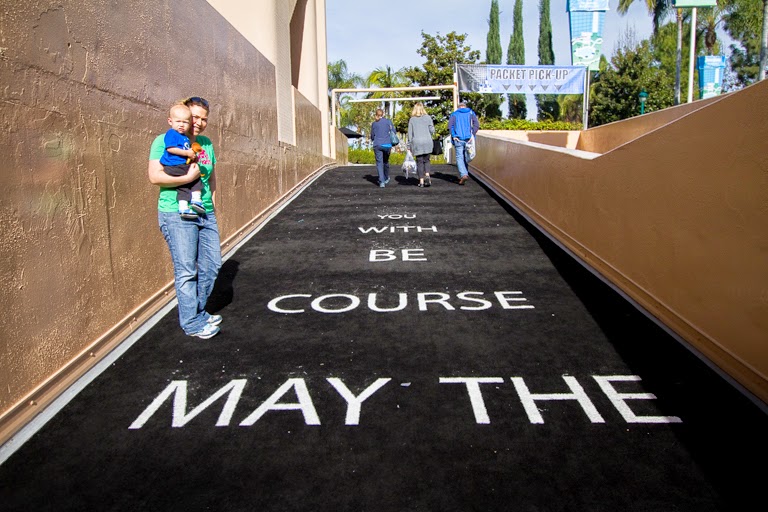 And yet another carpet, this one red, as you make your way into the expo. 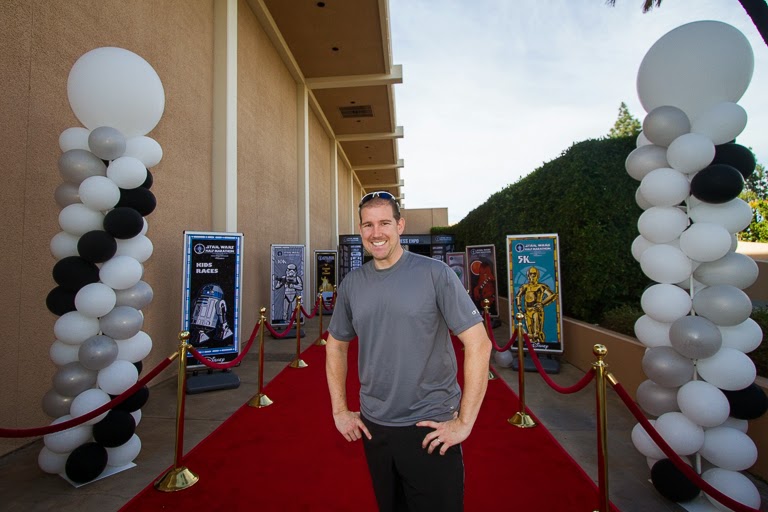 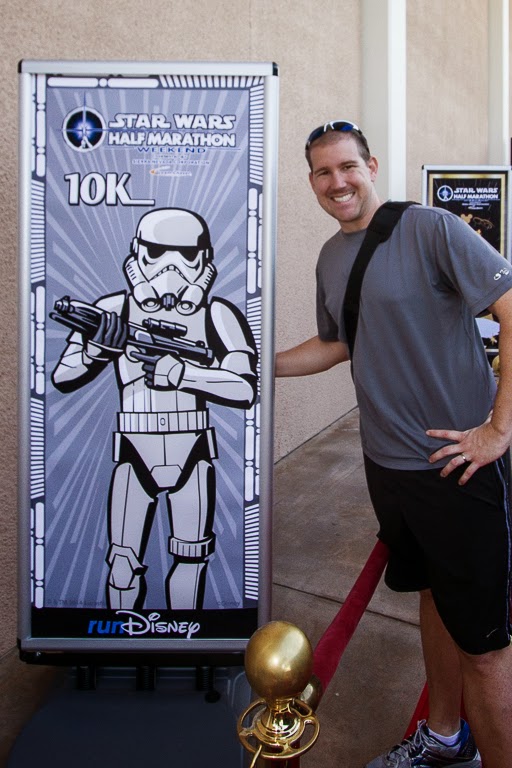 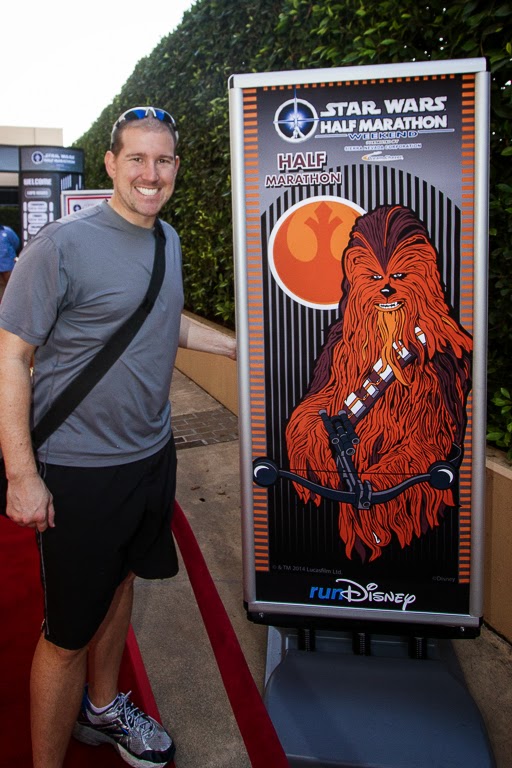 Which all adds up to one Rebel Challenge. 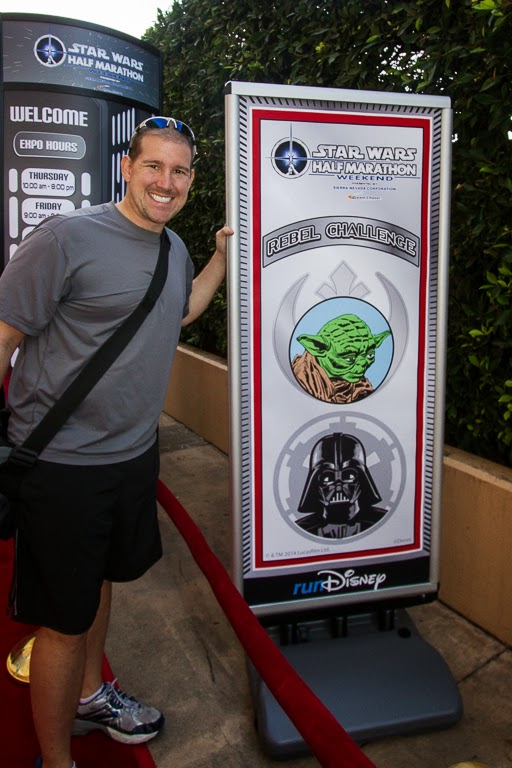 Inside there were tons of people ready to hand out your race shirt. 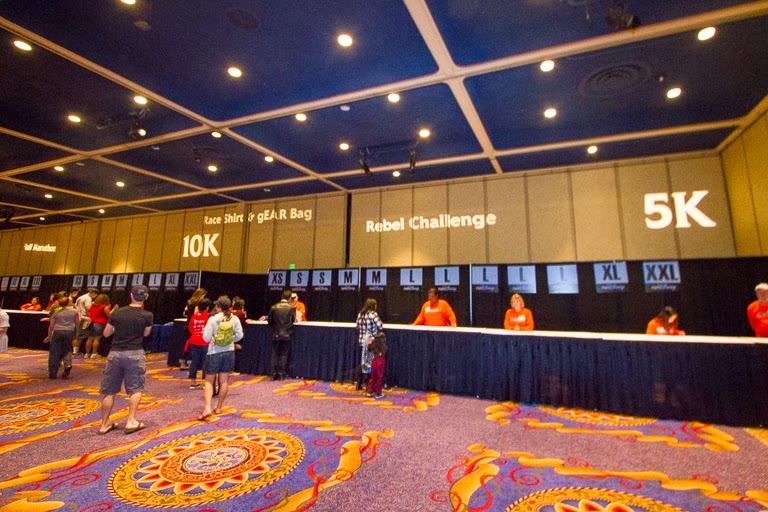 And it's so much better now that there's an official place to exchange your shirt. I remember in years past, Theresa holding a handmade sign near the shirt tables asking if people needed to exchange a shirt. 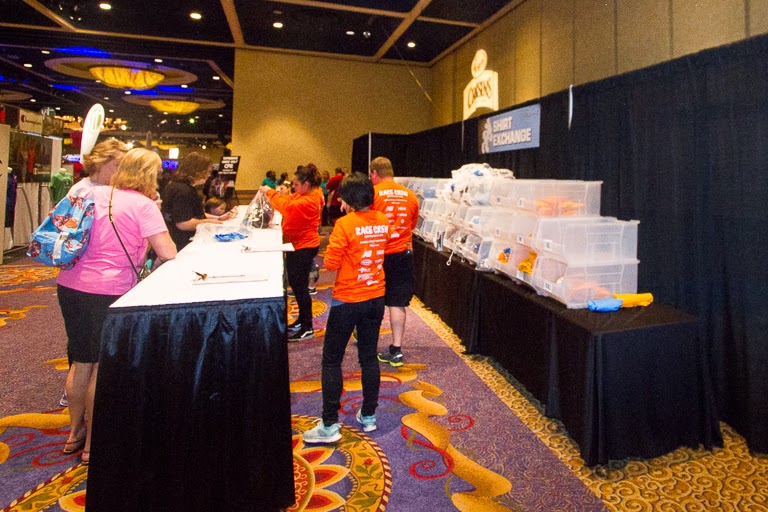 Checking out the Dream Chaser by the major sponsor of this event, the Sierra Nevada Corporation. They're a private company working to provide a reusable spaceplane to take up to 7 people up into a low earth orbit (between 99 and 2000 miles). For comparison, the International Space Station orbits around 250 miles above the earth. 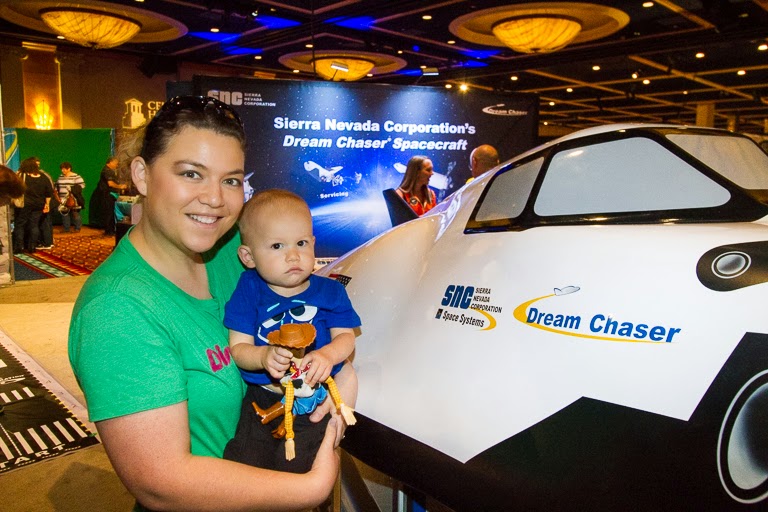 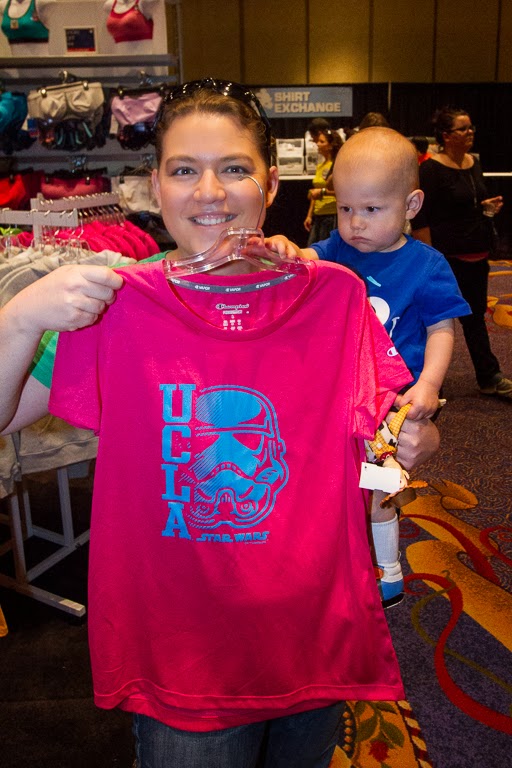 Then it was time to head to the Official Merchandise section. I'm not one for race gear, but I did find a couple hats I liked. 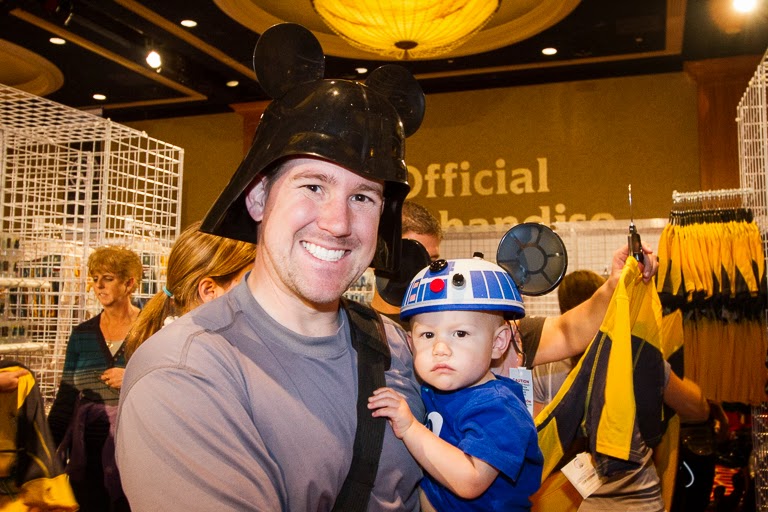 Ian wasn't too sure about the Vader helmet. 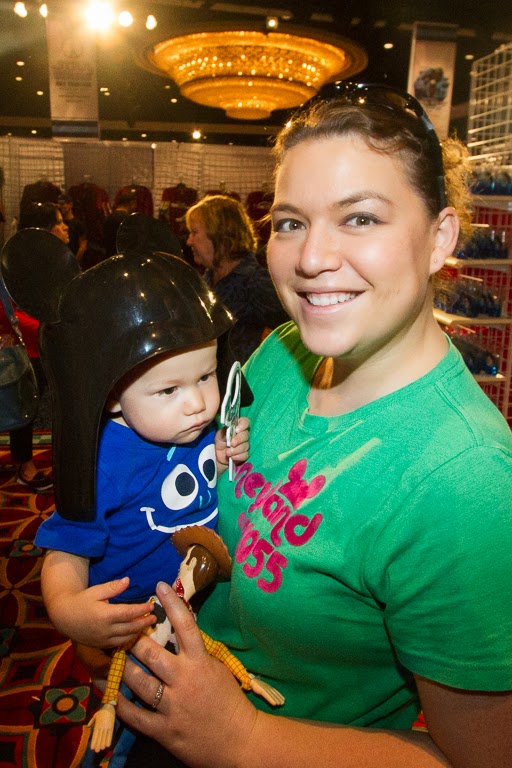 And he didn't want the R2 hat on either... Maybe he's more of a Star Trek fan? 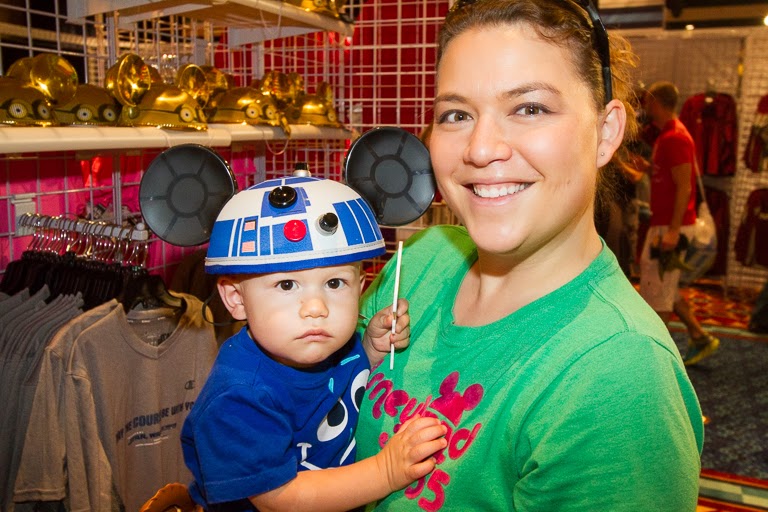 After grabbing all my goodies there was just one more thing to do. In the hallway outside the expo there's always some sort of photo opportunity. Here I see they brought out the themed Star Tours backdrop and changed out the nameplate. 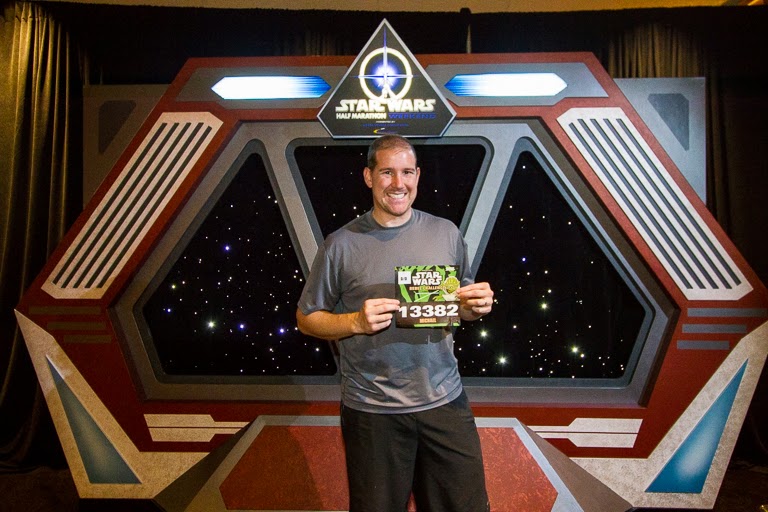 Here's a picture of that backdrop from a previous TR during the 24 hour Rock your Disney Side event from May. I've also seen it in some of my photos from Mickey's Halloween Treat in 2011. 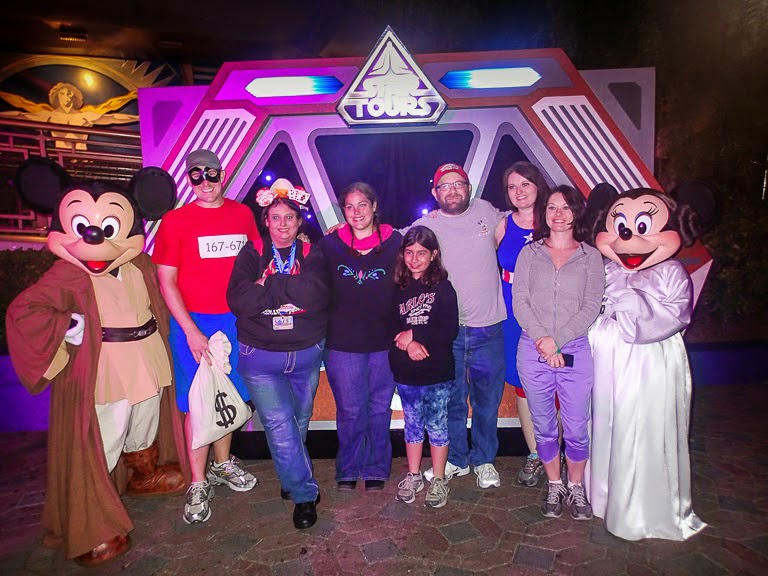 Tomorrow morning is the 10k and it starts super early. We'll continue the next part of the trip report there.
Posted by Joe at 6:00 PM