It's Christmas-time and one of my favorite parts of the season are all the lights and decorating of the houses. You've already seen what my house looks like in this post. Let's walk around the neighborhood and also to Sleepy Hollow Lane where all the houses go all out. 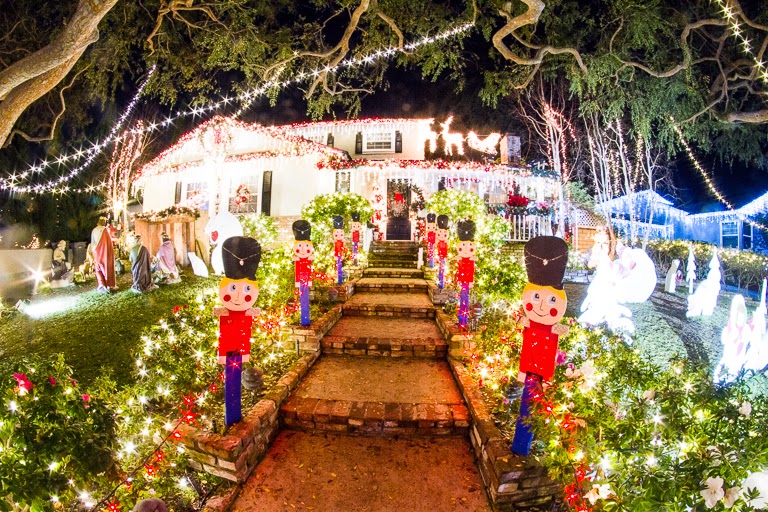 The three of us like to go out for walks at night anyway, but it's even better when we are going out with a purpose. Ian was always a good sport with whatever hat we decided to put him in each night. 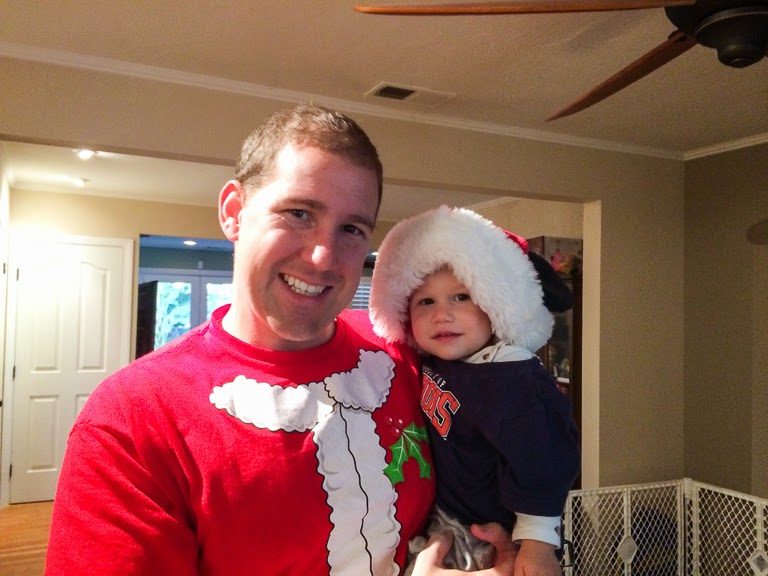 Of course we need to get into the spirit while we're walking around too. Ian's wagon was decorated with Christmas lights, and he did get some great comments for it while we were out and about. 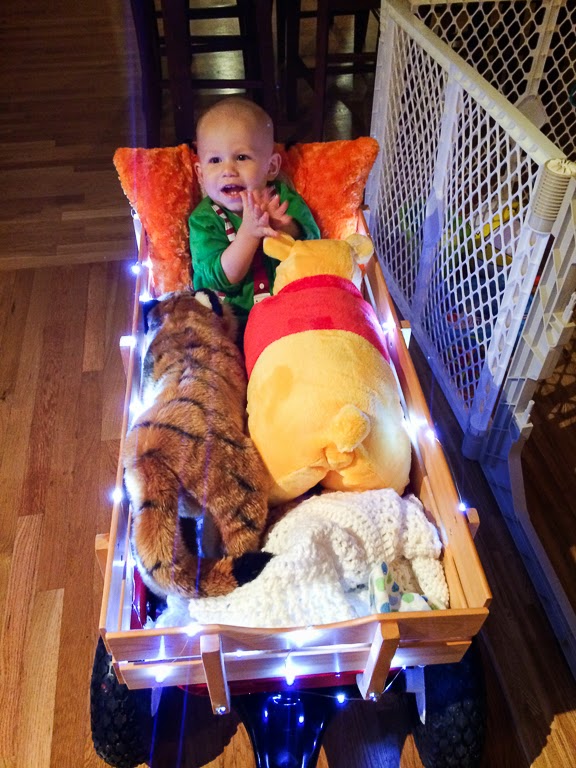 Like I said, lots of nights going out means lots of different hats. His cute Winnie the Pooh Santa hat. 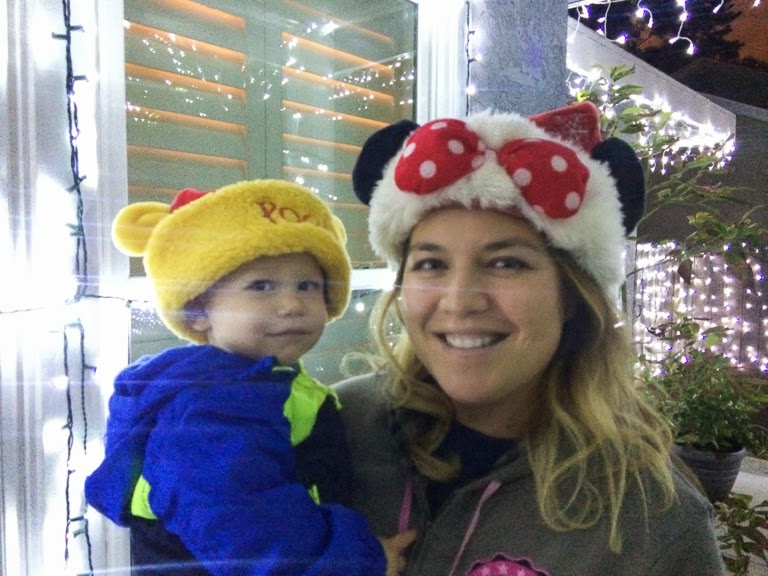 Along with an Eeyore Santa hat. 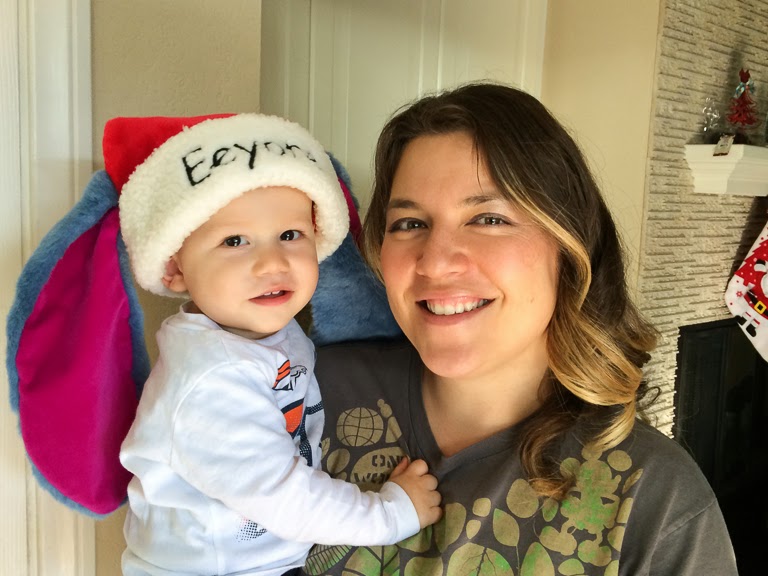 My favorite is his Prep and Landing hat. Olaf was a Christmas present from the neighbors. 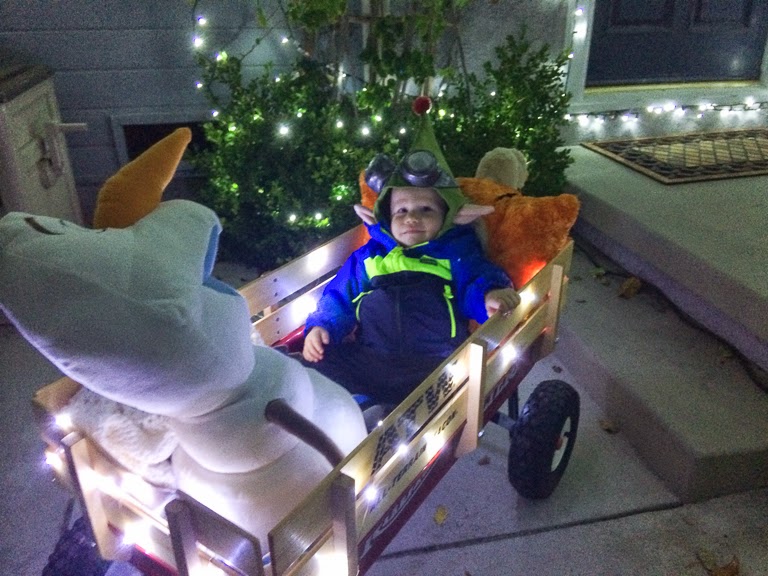 Ian's wagon glowed as we walked down the streets. 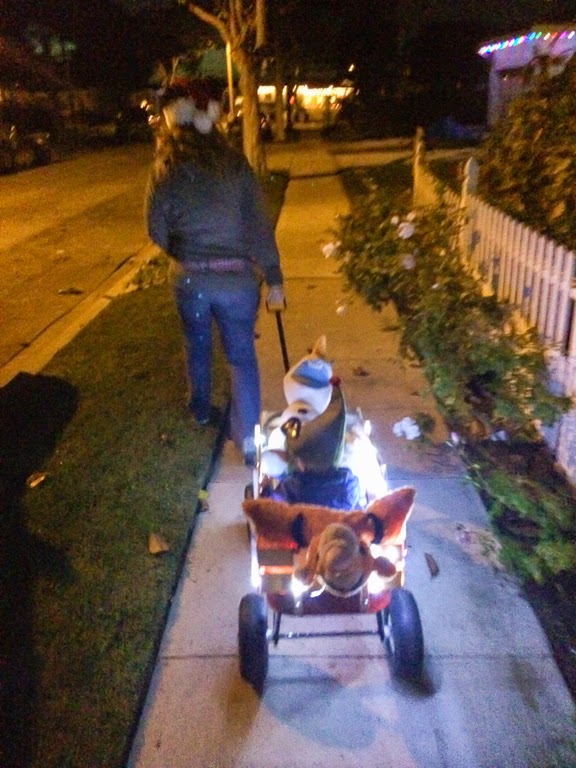 An interesting choice of decorations. 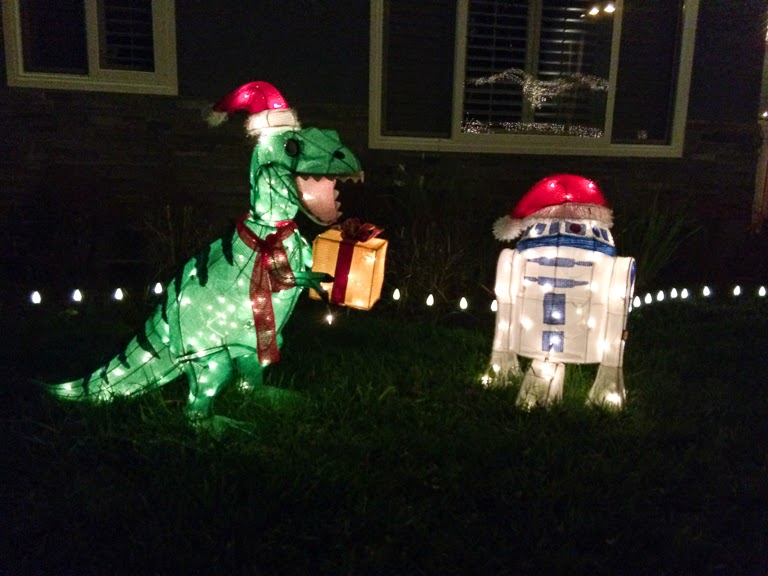 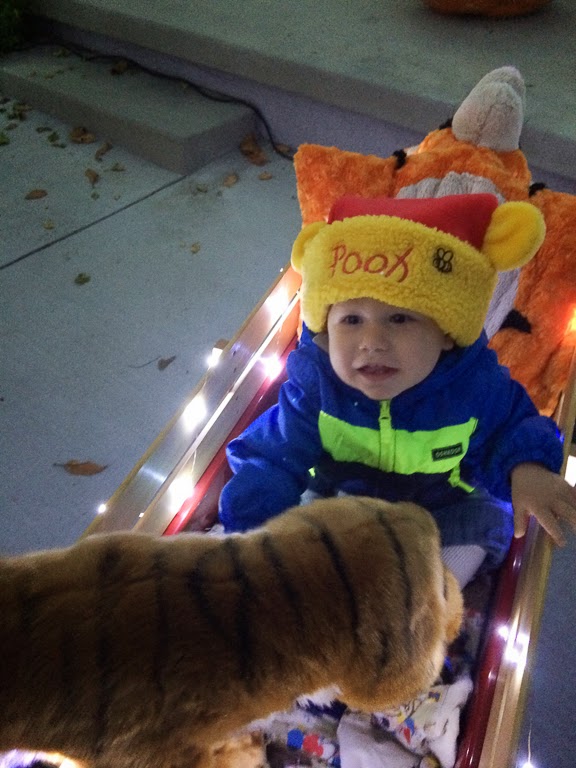 The grandparents went out with us on a few of the nights. 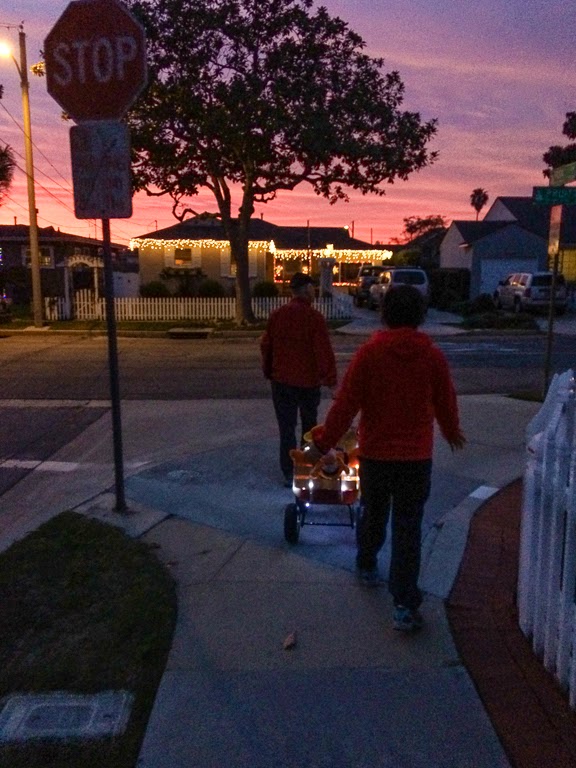 Okay these aren't from looking at Christmas lights, but they're too cute not to post. 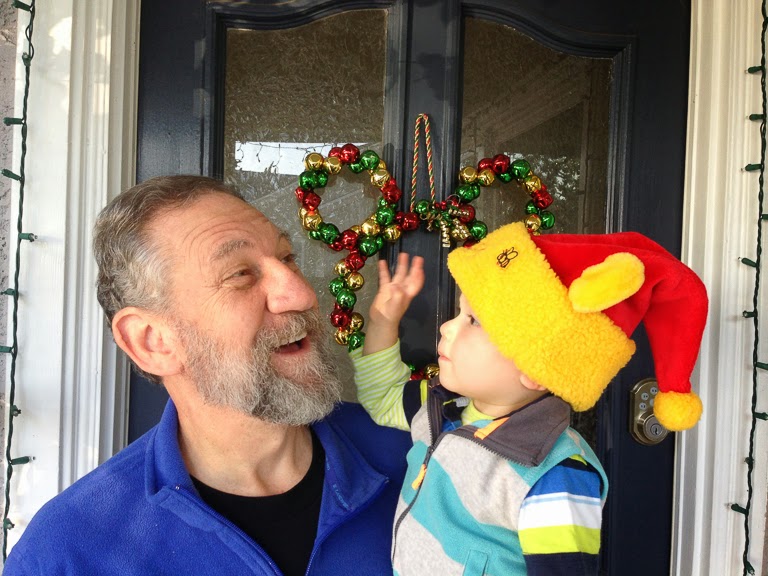 Ian went for a walk with his Pop Pop and Gram. 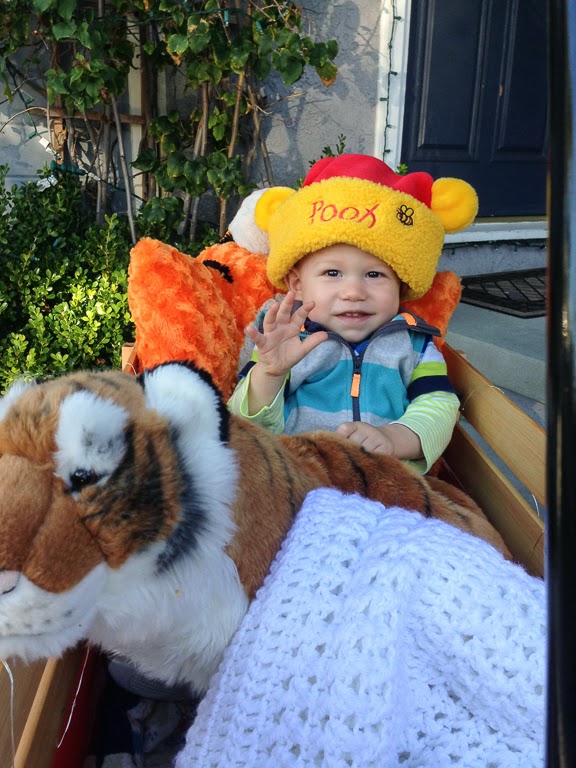 Sometimes walks can be exhausting. 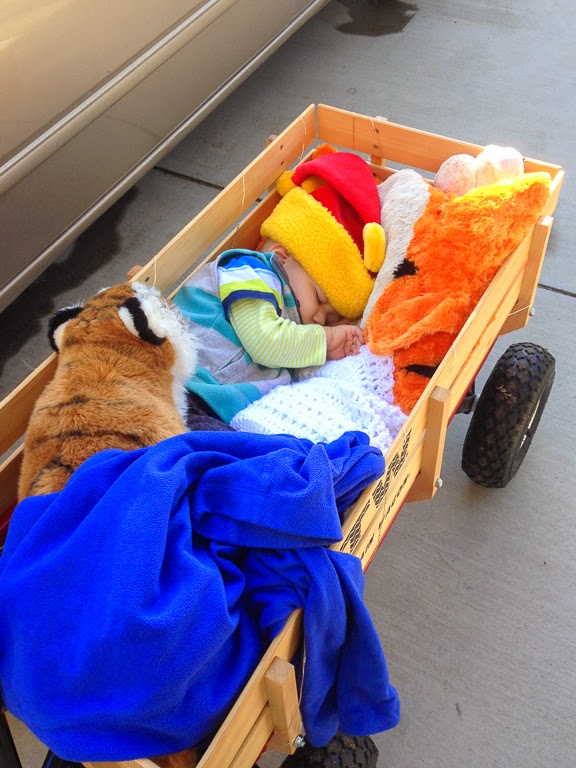 A couple nights before Christmas, T, Ian and I piled into the car along with both sets of grandparents to head to a neighborhood where all the houses are decked out for Christmas. Ian loves getting shoulder rides from his Pop Pop. 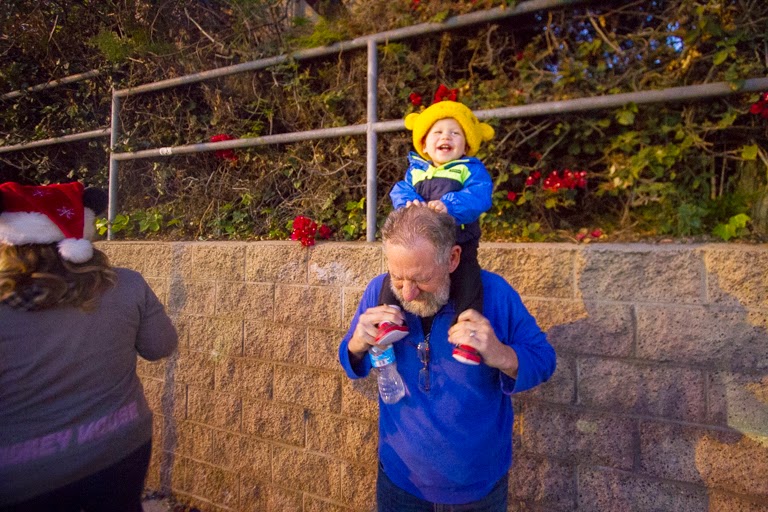 I had read previous reviews on Yelp regarding Sleepy Hollow and that parking would be a little nuts. We parked off what I thought was about a block away and started looking for lights. 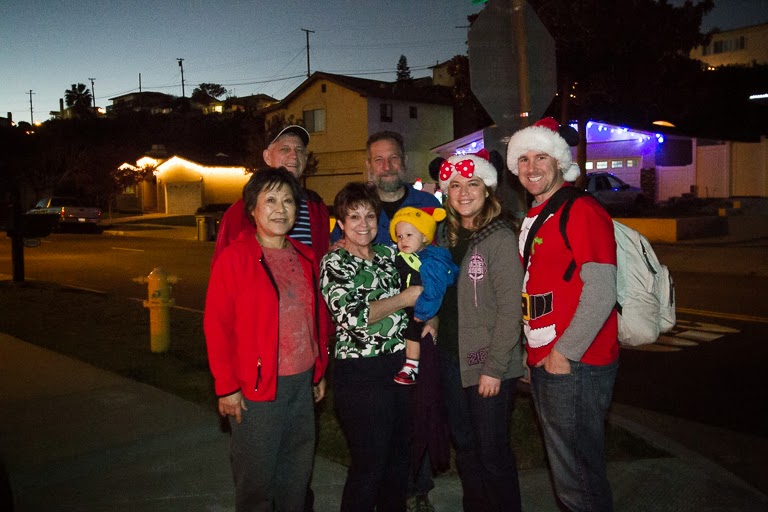 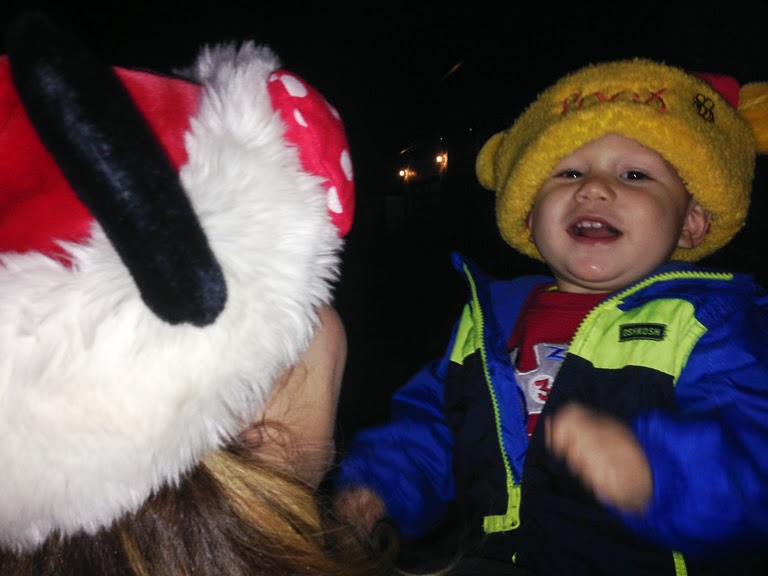 There were some fun displays here and there. I liked this icy North Pole display. 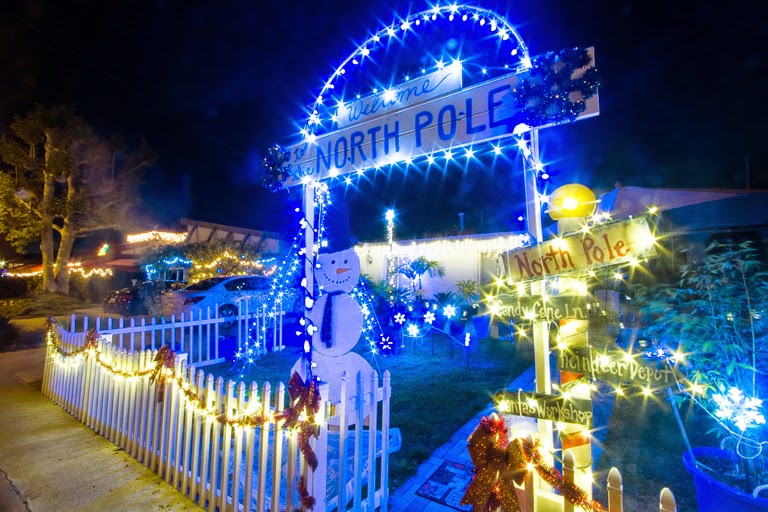 Frozen made its way into a display here. 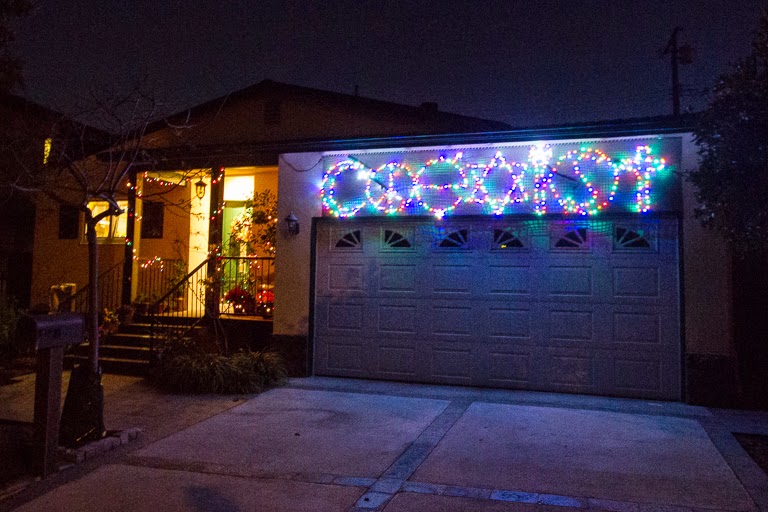 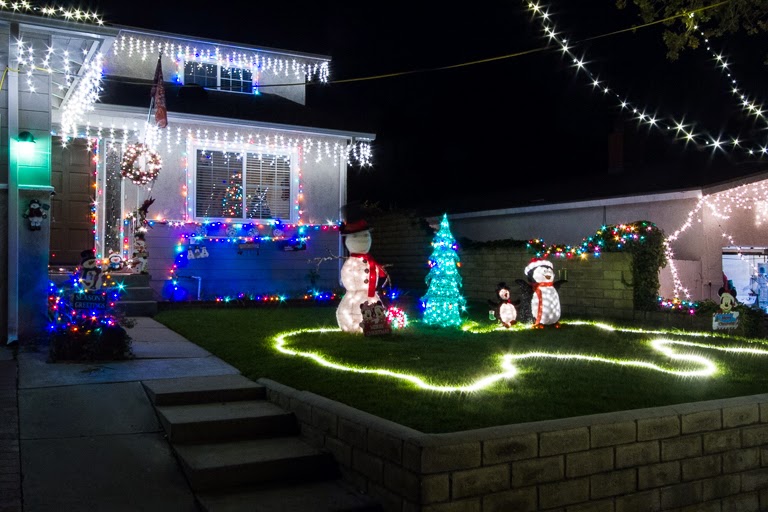 Well there were a few houses here and there, but I wasn't seeing as many houses as I was expecting. Yelp as well as signs along the road had led me to believe that this whole neighborhood would be decorated, but from our walking around, these are the neighborhoods that really went all out. 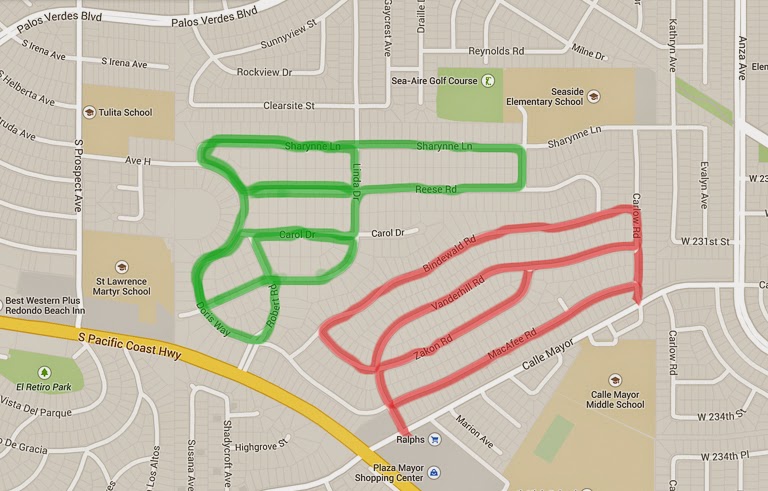 Once you got into the section I've highlighted in green above, all the trees lining the road have lights on them and you start seeing long lines of cars with kids standing up and poking their heads out the sunroof. 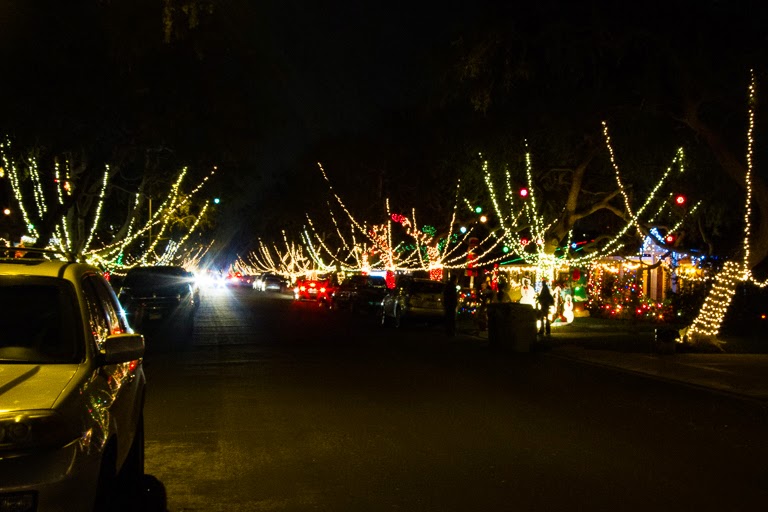 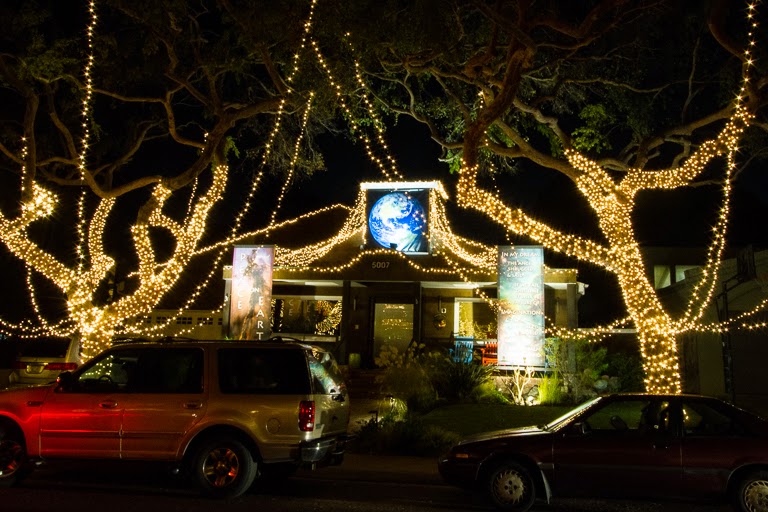 The rest of these pictures are just a few of the houses you'll find in the neighborhood. 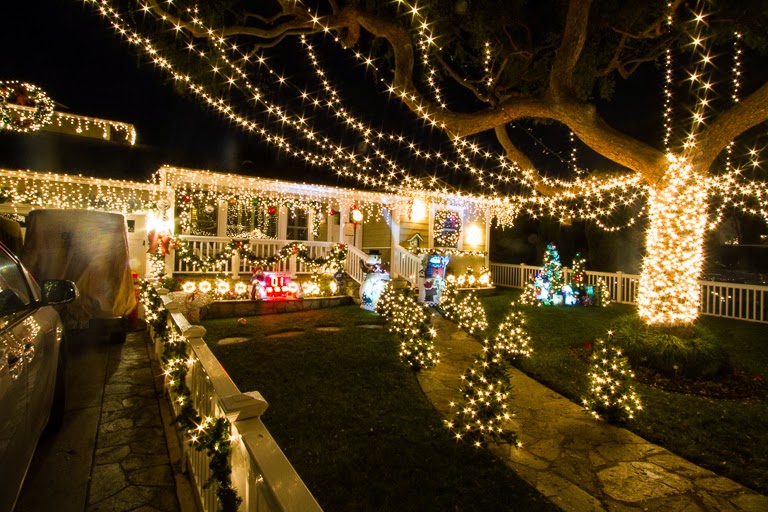 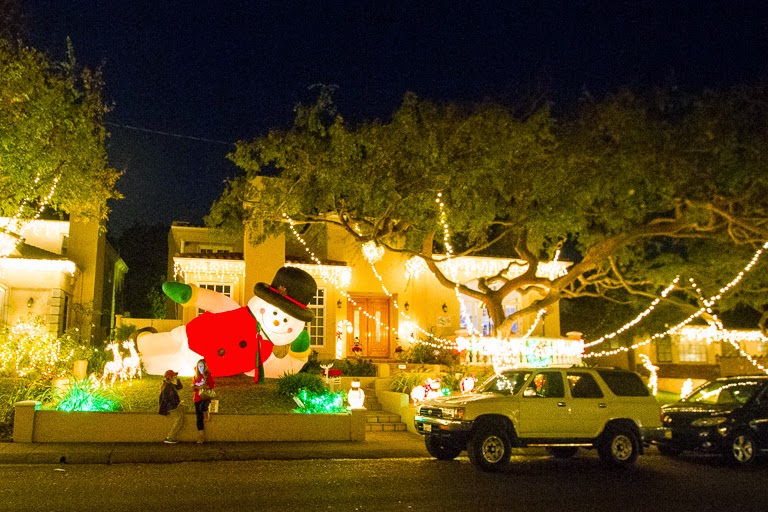 This Frozen display won an award for Outstanding Decorations. 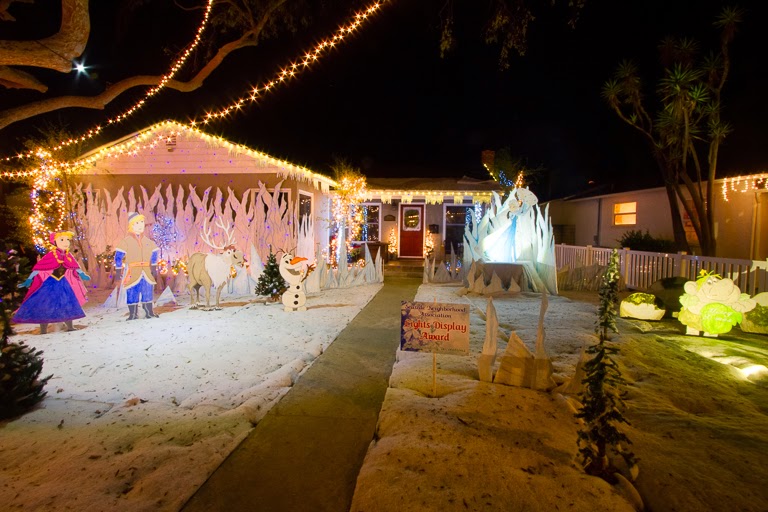 I was expecting Ian to fall asleep since it was his bedtime, but he was poking his head out and looking around the entire time. 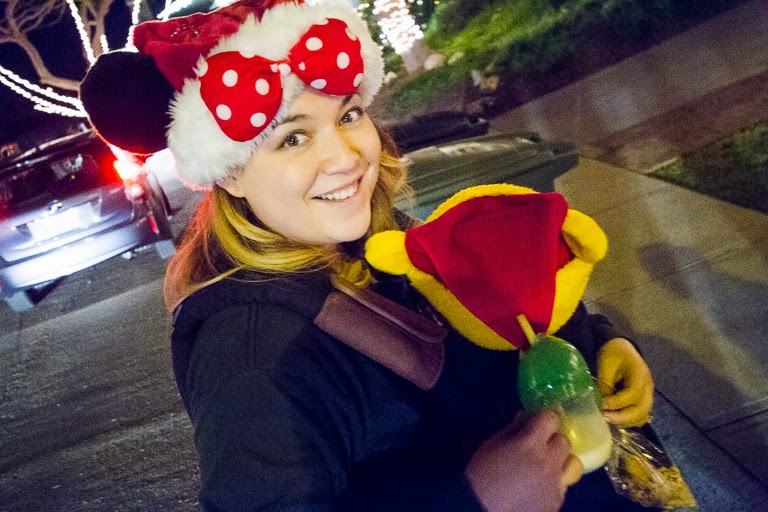 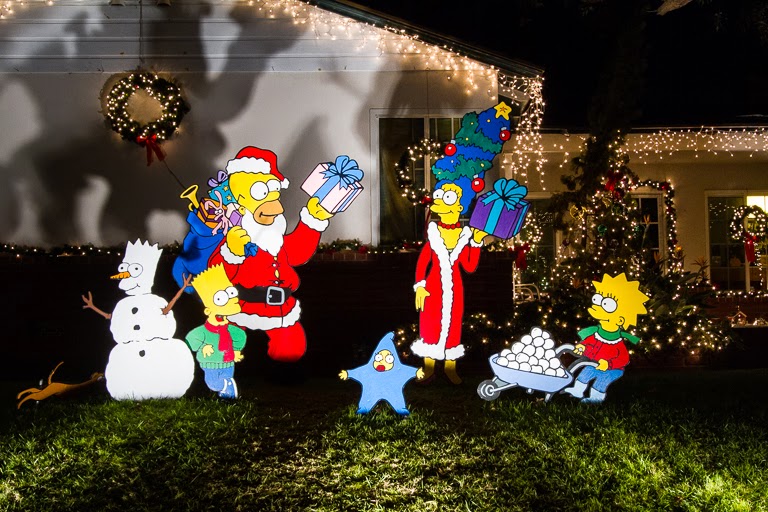 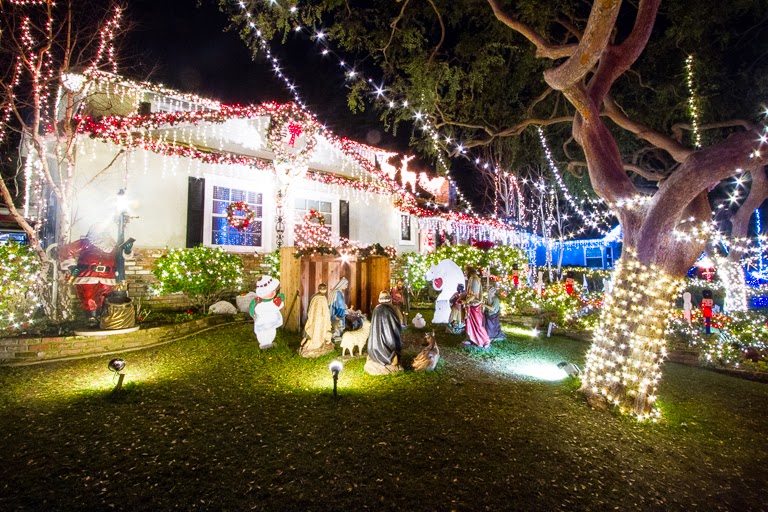 Well it was a successful visit to Sleepy Hollow. I think we'll be back again next year.
Posted by Joe at 10:00 PM