It's Father's Day weekend and the time Ruston and I have been practicing for is finally here.
The 23rd Annual Pasadena Chalk Festival is happening on Saturday and Sunday. But first, how did we get to this point. 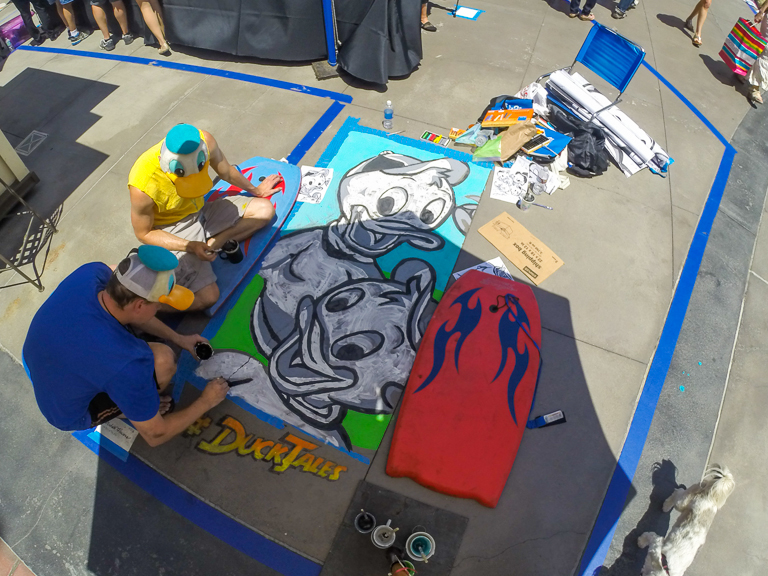 Last Saturday Ruston and I went to a beginner's workshop where we learned a little bit about what to expect at the event, and got to ask a lot of questions to a professional chalk artist.
The Thursday before the event there was a free mixer for the artists and other VIPs participating in the Chalk Festival. 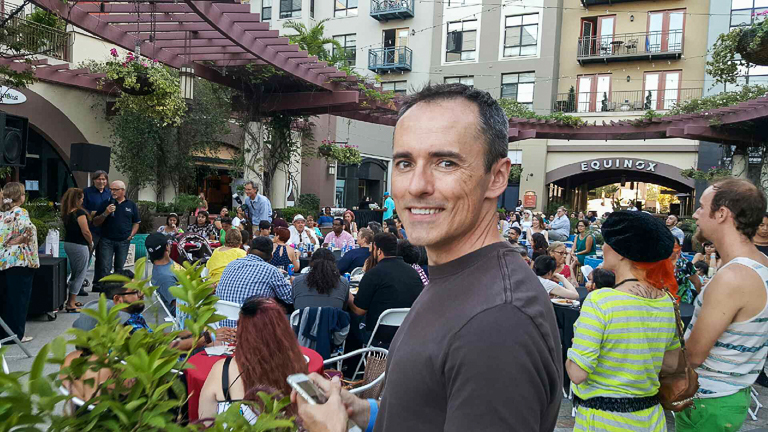 But today's not only about free food. At 4pm, it's first come, first served for picking locations.
All the different spots have been marked off with tape. The top artists grab the premium spots in the lower courtyard that get lots of traffic.
Ruston grabbed what he thought would be an awesome spot, then we texted back and forth discussing the merits of that spot versus some of the others that were still open. Location was #1 for us, but it was also important to have good pavement to work on. 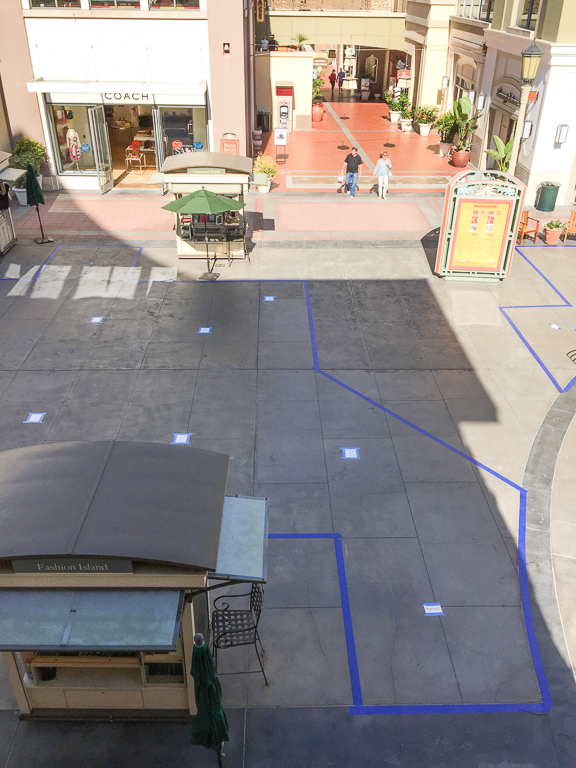 Of the four different options we discussed, we decided his first choice would be ideal for us. We're down in the lower courtyard right by the main stage and the silent auction tent so we're sure to get lots of traffic. The pavement isn't pitted with only a few cracks going through it, plus the we've got some room to move around. It's also right in front of the stairs, elevator, and escalators that take you to the 2nd floor, so there will be lots of people going by. We weren't sure if it would be a good thing or a bad thing that we're not right next to other artists. We're kind of an island alone unto ourselves. 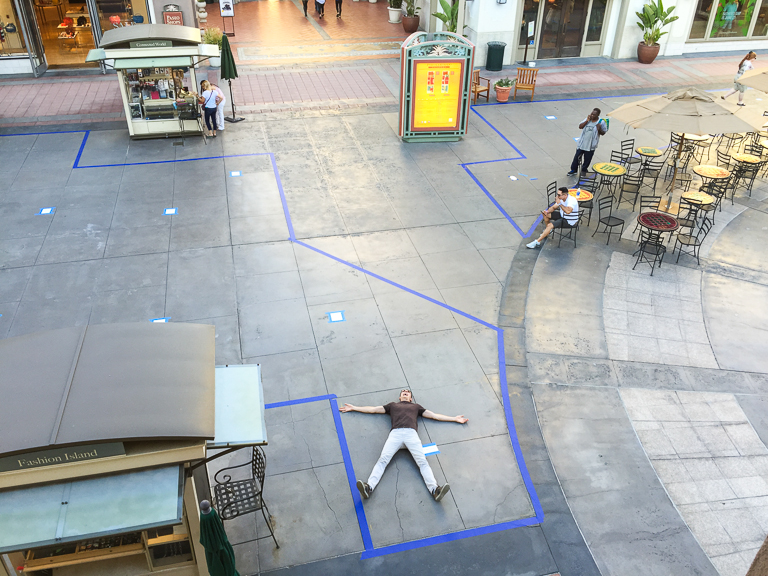 Ruston checked in for the party. 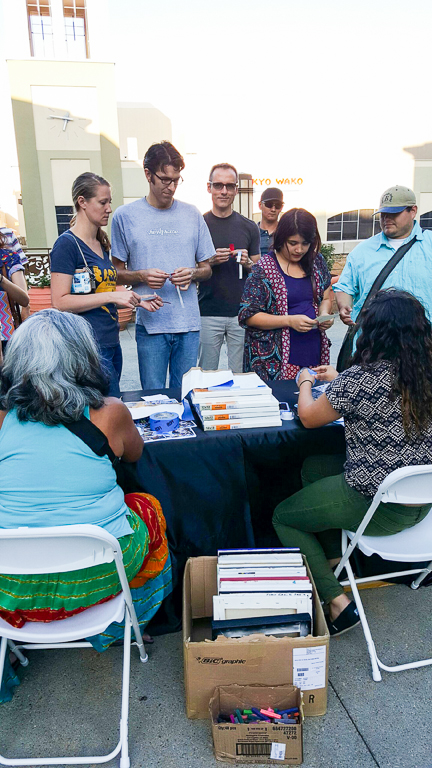 And enjoyed a delicious meal provided by Rubios. Many of the artists have participated in this event for multiple years and have become friends. We'll see how this first year goes for us and see if we'll be doing this again. 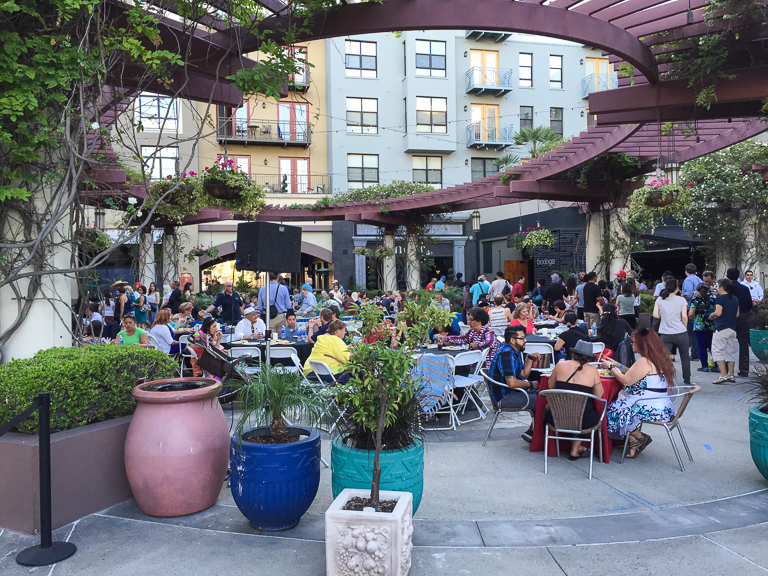 Tom Coston, the president of the Light Bringer Project came up and spoke to everyone about the history of the event and what it meant to the Paseo and the city of Pasadena. He also brought up a new artist who had come all the way from Italy. 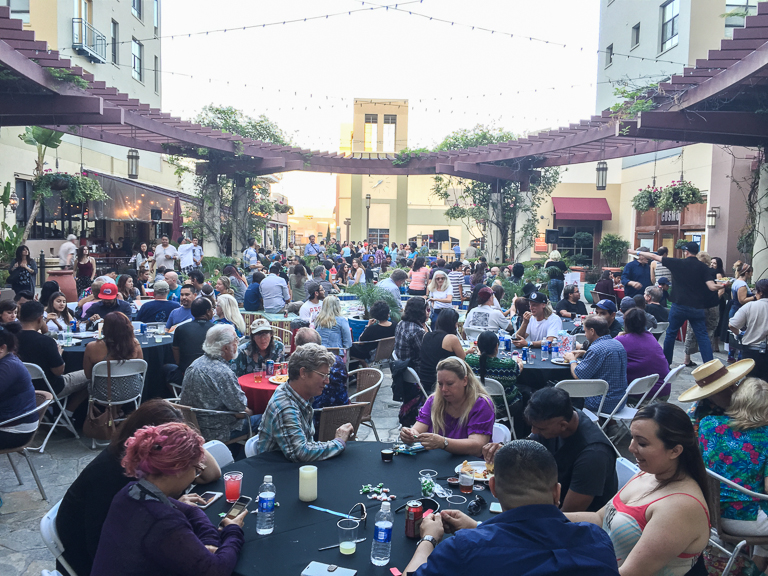 After the party, Ruston did one last check to make sure we had our spot. Yep! We'll see what tomorrow brings! 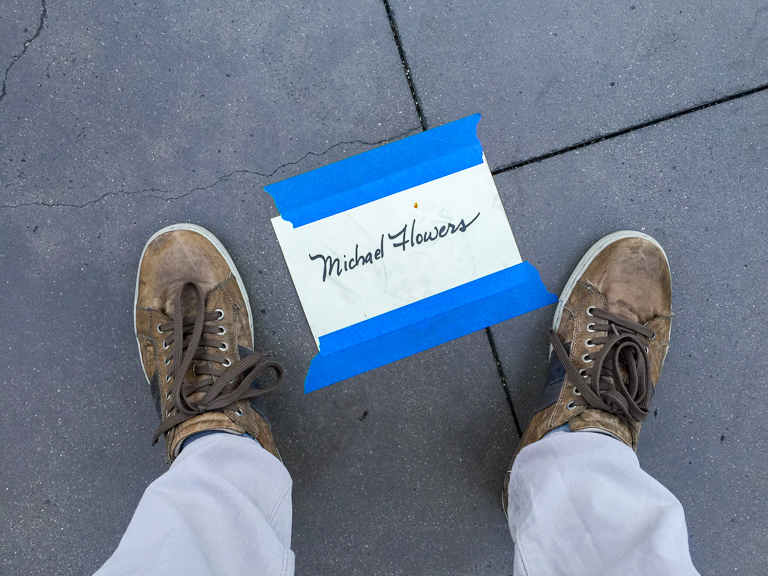 Bright and early Saturday morning I drove up to Pasadena, picked up Ruston and we headed to the Paseo. It's 8:45am and there's a few artists that have already started their pieces. We put all our stuff in our spot then I left to go check in. 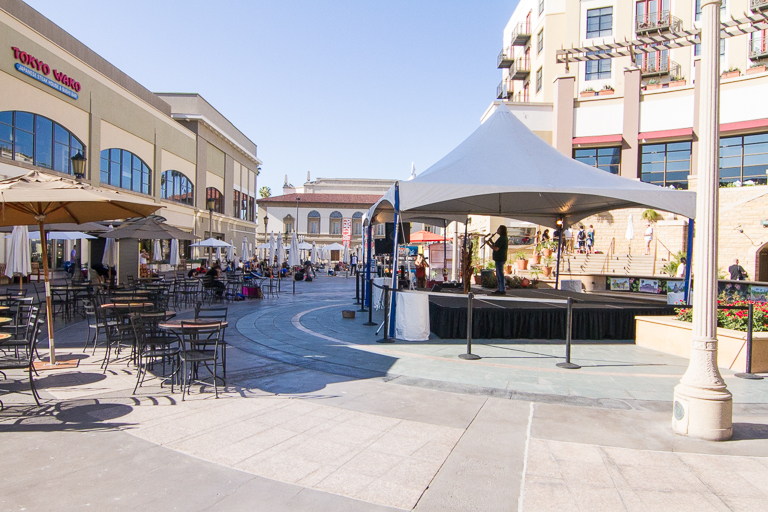 First up was turning in my 1'x1' painting. All the artists are asked to donate a painting for the silent auction, with proceeds going to the Light Bringer Project. We'll follow up with that later. 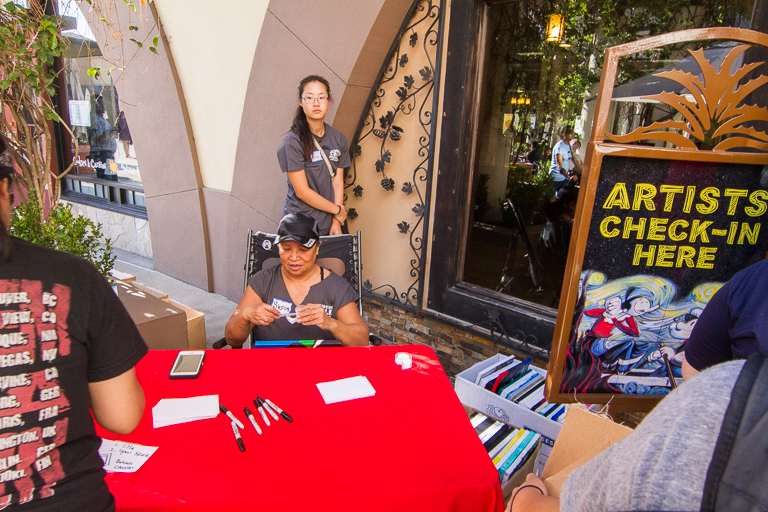 I checked in with the organizers, got our artists lanyards, picked up our chalk, a few snacks and headed downstairs to get started. 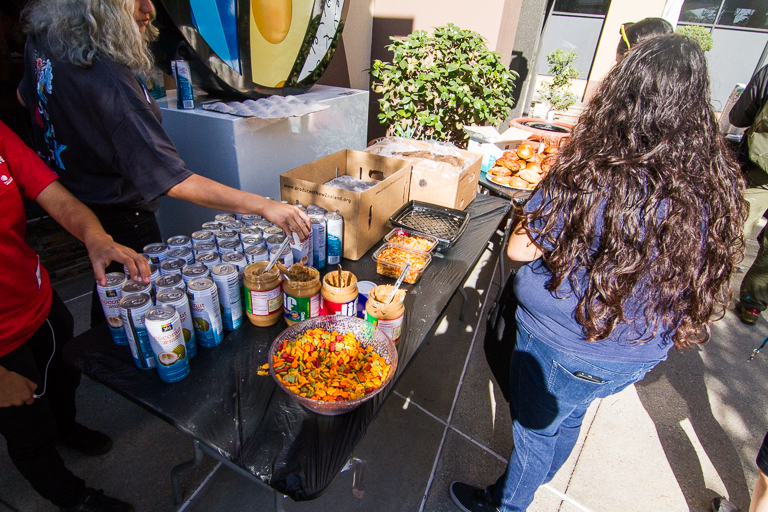 There's many ways to get a pattern on the ground. Some artists use a grid system, while others use stencils. Ruston and I have a 1-1 print-out of our mural and we've scribbled a layer of chalk on the back. Then we'll flip it over, trace the design on the front, and hopefully have the pattern transfer onto the pavement. Kind-of like having carbon paper on the back, except carbon paper isn't allowed. We practiced this a couple times in my driveway and the method worked great! I was crossing my fingers for the same success here. 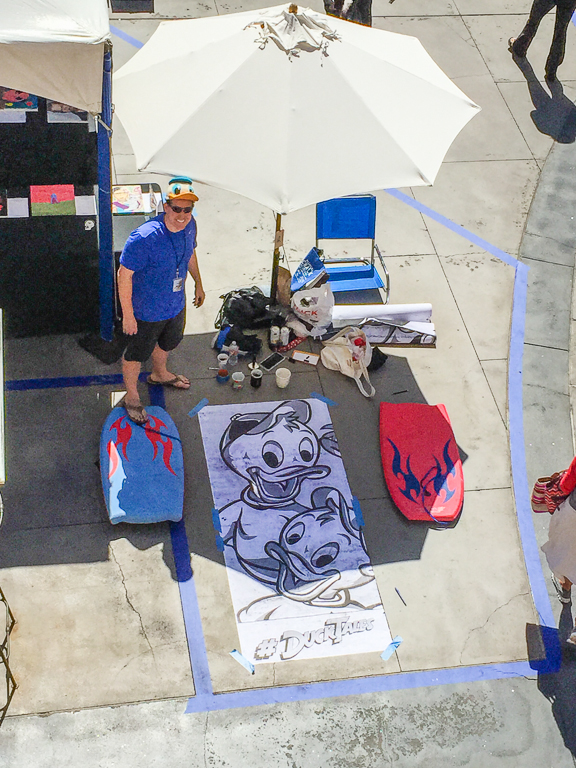 Ruston and I hard at work tracing out our design. 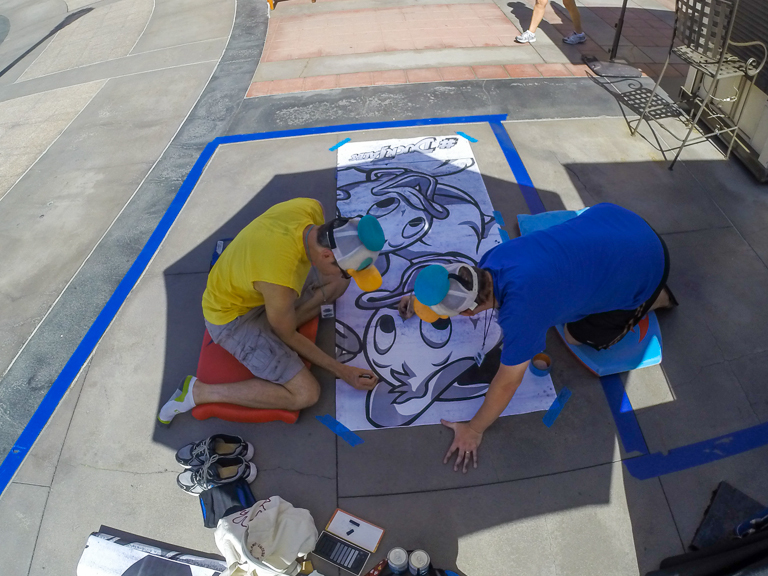 For our purposes, we want our mural to look exactly like the printout above. It's nearly impossible to create sharp lines with super saturated colors by using dry chalk. Our plan from the beginning was to crush a lot of our chalk sticks into a fine powder, mix the powder with water, then paint it on with sponge brushes. At past event, I'd seen people using a mortar and pestle to grind sticks into powder. I used a ziplock bag and a heavy flat bottomed meat tenderizer to turn my chalk into powder, and I had a couple people who were interested in what I was using. 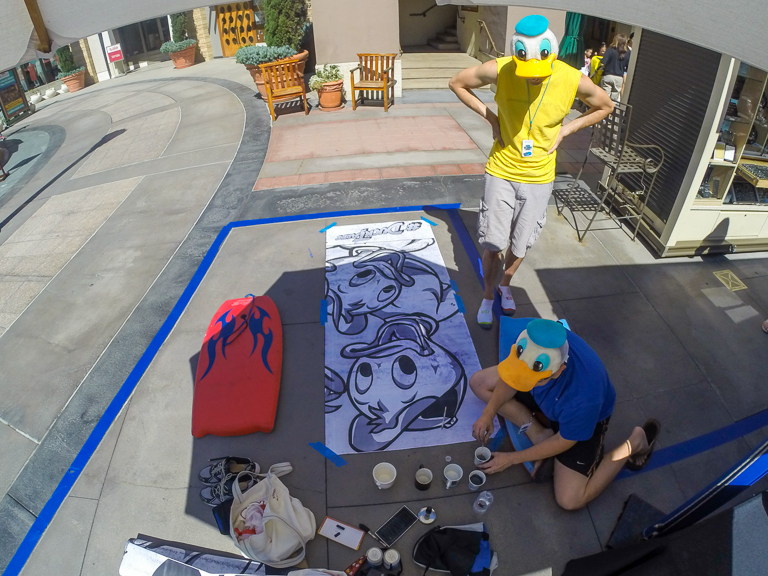 We started by doing just the small "Ducktales" at the bottom and after tracing the design on the paper, we peeled back the layer hoping to see beautiful transferred lines. What we found though was... nothing. The chalk just wasn't sticking to the pavement like it had during our practice sessions. This wasn't good. Next we tried tracing over each line 3 times and after doing that could see very faint lines we could follow. We continued this method across the rest of the drawing then peeled back the paper. Some sections transferred better than others. Unfortunately it was things like a hat, and not important things like eyes and mouths. I'm not a good enough artist to do this freehand, so we'll have to find a way to make it work.
Ruston and I put another super thick coat of chalk on the back of the paper, then traced over the pattern 5-6 times and finally were able to see an outline of our design. Yikes. This day was starting off rough. 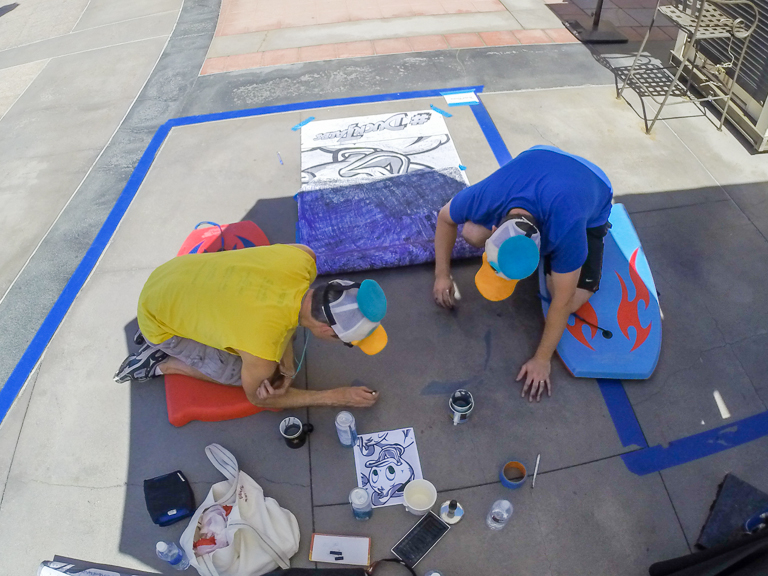 With the pattern on the pavement, it was time to start filling it in with chalk. For this, Ruston and I started with gray, and noticed it wasn't sticking to the pavement like we were expecting. The concrete here doesn't seem to absorb the water/chalk mixture. Ruston had heard other artists talking about how certain sections of the Paseo courtyard seemed like they'd been waxed. I'm not sure if that's the case here, but we're having some problems getting the chalk to stick. 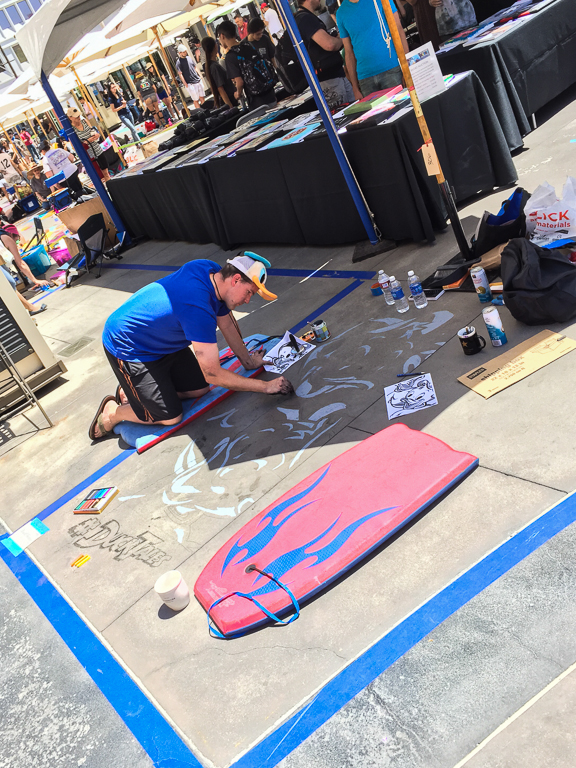 Throughout the morning, volunteers would come around asking if you needed any particular colors of chalk. If you did, you'd swap them 1 for 1 with a color that you didn't need. Only 7 colors for our mural. Blue, green, red and yellow for the background colors, and black, gray and white for the characters. 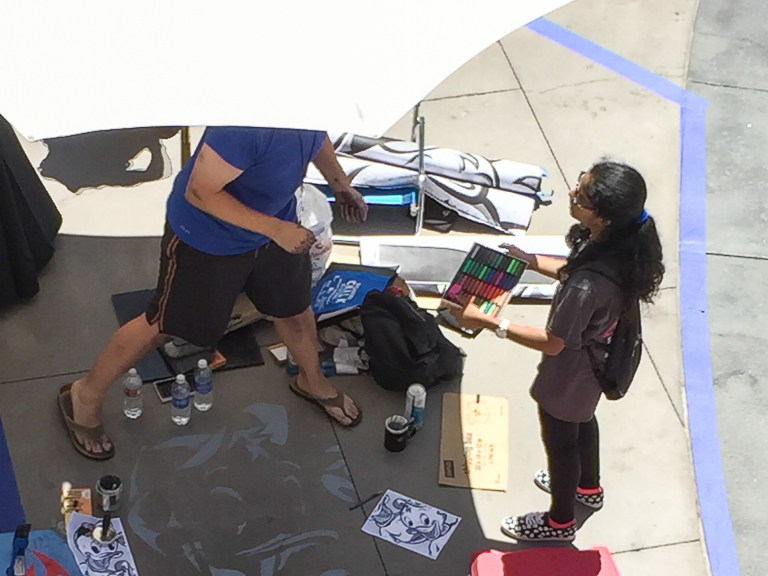 Next it's time for the white. I had calculated the number of sticks we would need to finish the entire mural and knew we'd need to buy additional chalk. The chalk we used during practice was different than the pack we bought and it wasn't performing as well.
Umm Ruston, this white chalk is going on a bit streaky. 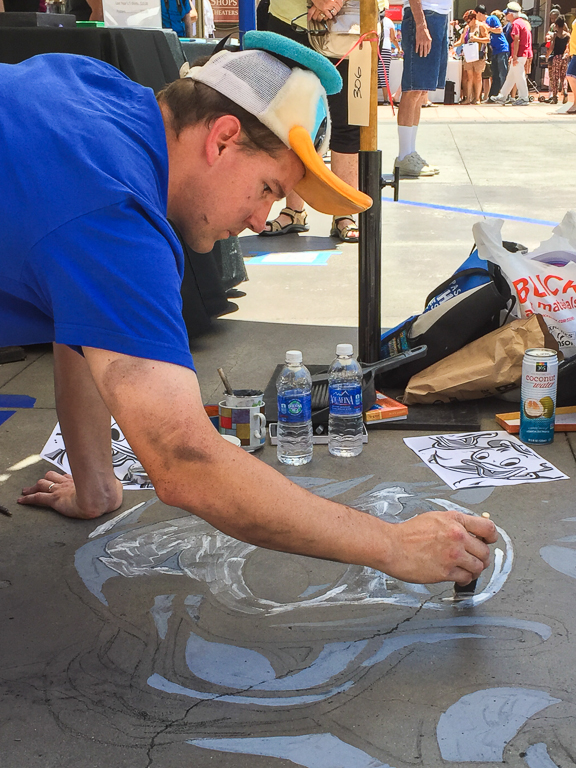 #Ducktales
Just in case anyone wants to tag us. Nice gradient on those colors Ruston. Many other artists were using carpet squares, foam squares, or bamboo mats to sit on while they worked. We were the only ones with boogie boards and we got quite a few positive comments on them. You could almost fully lay out and still not touch the pavement. That was important too, because it was really hot with no cloud cover. Temperatures hit 97F and the pavement was roasting. I wonder if we'll see some more people on boogie boards next year. 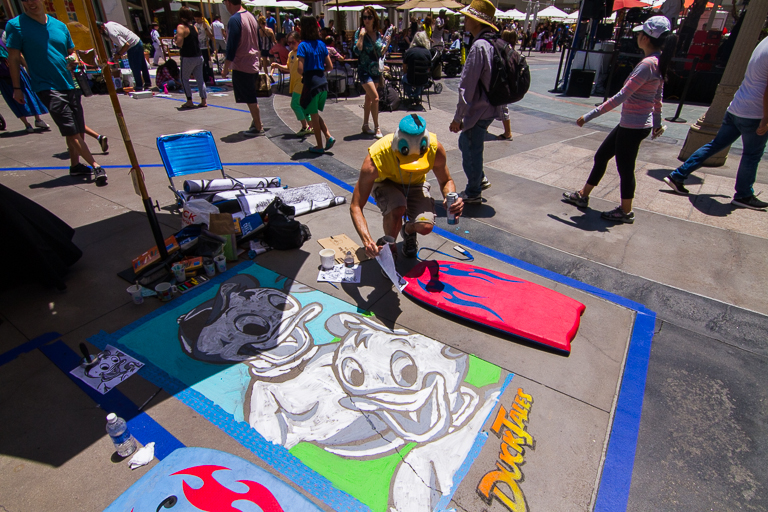 After the gray and the white, we put down the bright, saturated background colors, and then it was time to start filling in the black. 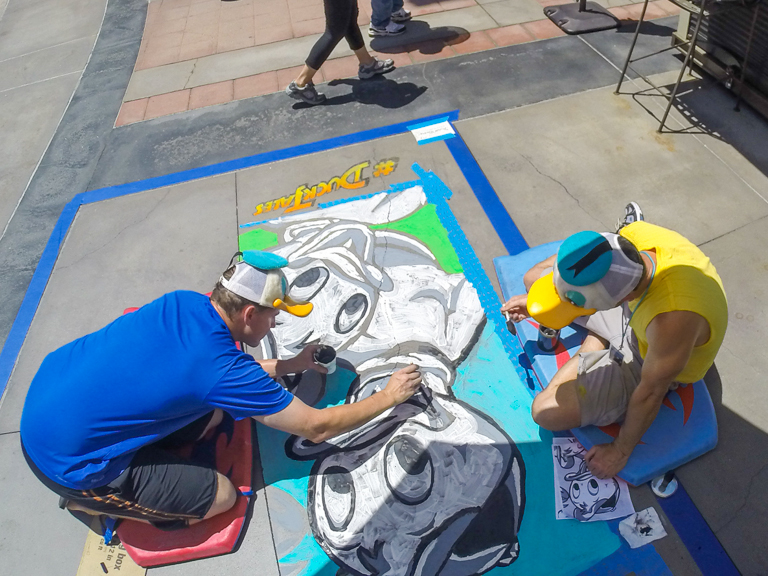 The pavement is super hot and pretty much bakes the chalk mixture when it's painted on. 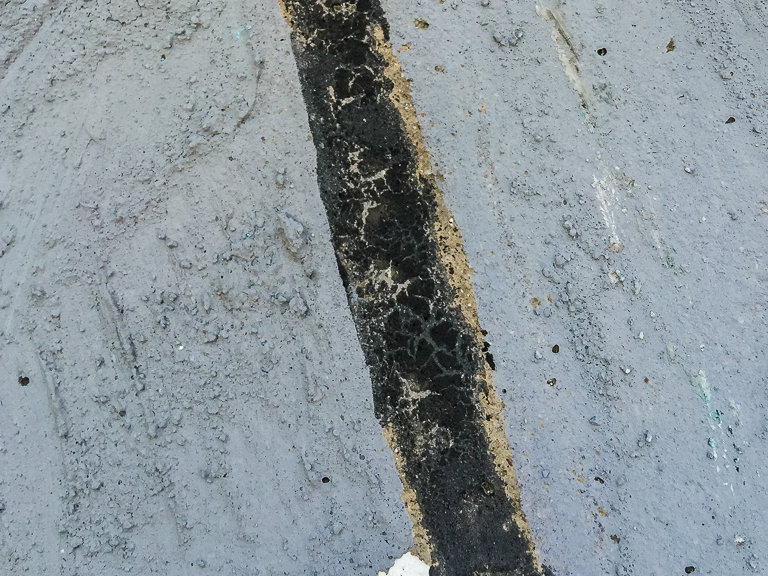 Phew. After 5 hours we had something down on the ground. It's half of the mural, but it's going to need a lot of touchup. Neither Ruston nor I were particularly happy with how it had turned out and were a little down about how the day had gone so far.
On the plus side though, we have made plenty of people smile and had lots of positive comments. Many people told us it brought back very fond memories of their childhood, and there were many times we heard a mom or dad tell their kids how Ducktales was their favorite cartoon growing up. And about those hats we're wearing. Those Donald Duck hats are classic hats from the 80s. I'm pretty sure I got mine from Walt Disney World in the late 80s and have a picture with me wearing it.

Ruston and I have taken a couple 2 minute stretch breaks throughout the day, but after 5 hours of bending over in the hot sun we needed to get away. It's time to see what some of the other artists are doing. Shuji Nishimura is one of my favorite artists here. He creates photorealistic murals that absolutely pop! 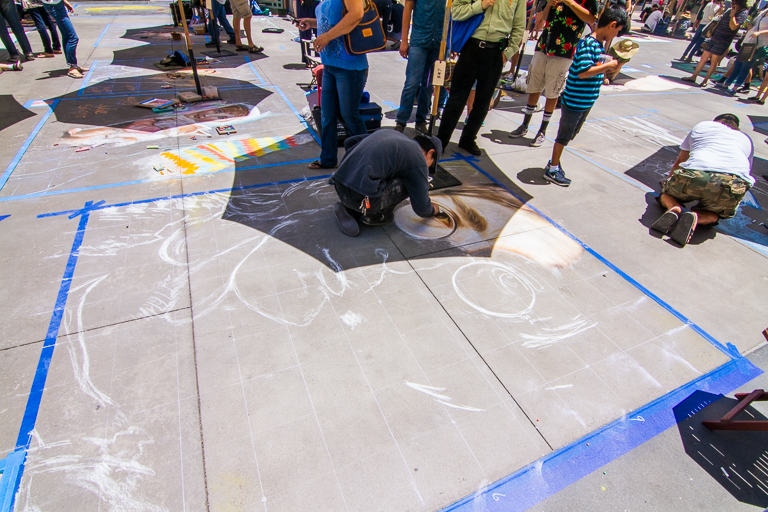 Our workshop instructor Randall Williams' piece is in work. 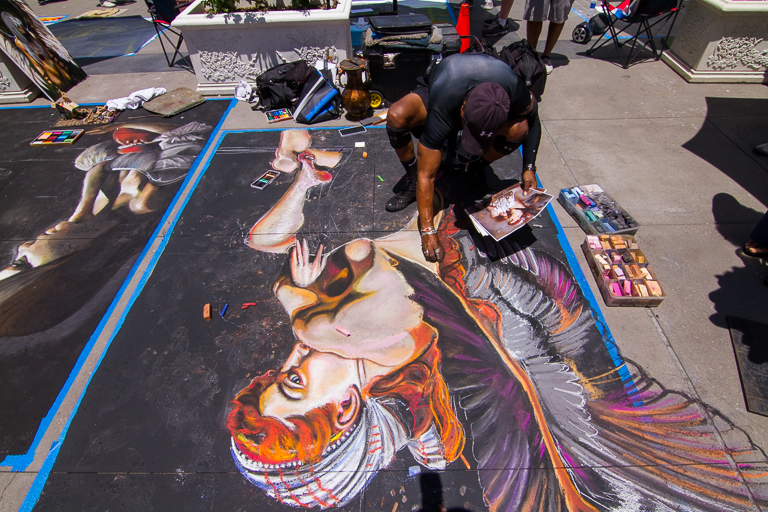 Joan of Arc still has quite a bit left to go. I wonder if that solid base coat of white helped. Maybe we should have done something like that. 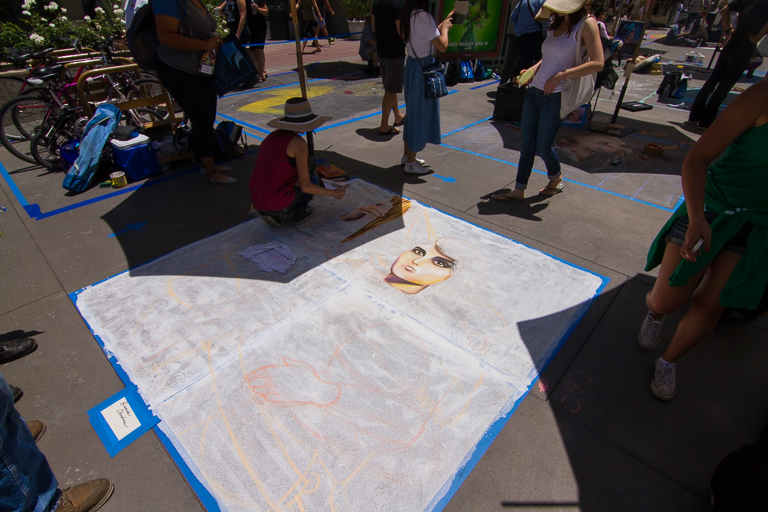 This lion is looking wonderful, but still has a bit left. That's one of the great things about coming on Saturday. You can see the technique the artists are using to put their work down, and see the difficulty that goes in to making these murals. 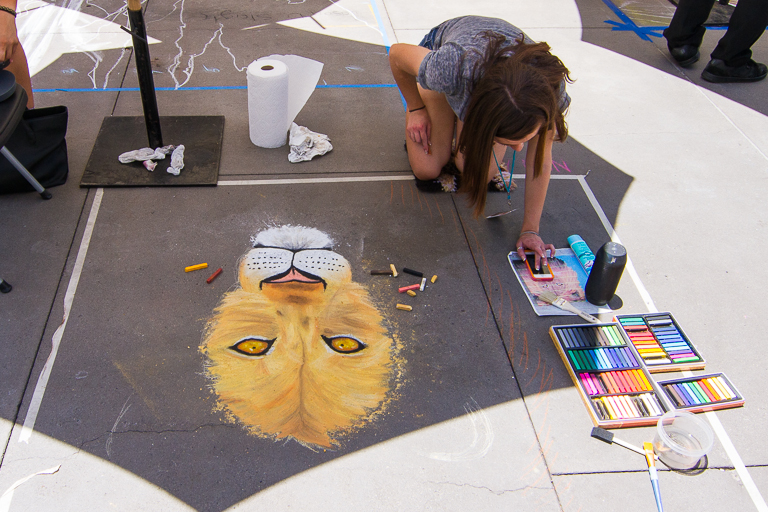 Well Ruston and I are famished. It's time for lunch. We'll continue from there next.
Posted by Joe at 2:00 PM