Since 2013, Lays has brought us many unique chip flavors in their Do Us A Flavor contest. In 2013, we were introduced to 3 different flavors, Sriracha, Cheesy Garlic Bread, and the delicious Chicken and Waffles. In 2014, Lays brought us Cheddar Bacon Mac & Cheese, Cappuccino, Mango Salsa and Wasabi Ginger. 2015 introduced Truffle Fries, New York Reuben, Greektown Gyro, and Biscuits and Gravy.
For 2016, instead of voting for our favorite new flavor, Lays is pitting 4 classic flavors against 4 brand new flavors. One stays. One goes.

The contest started on Feb 8th, but I had the hardest time finding all the flavors. Many stores had the Flavor Swap displays, but stuffed them with all regular flavors. Between a couple stores in Michigan, and 5 stores in California, I was only able to find five of the eight flavors. Luckily for me, my brother in Colorado was able to find the remaining flavors and during a March visit I was able to get them from him.

Because this kind of thing is always more fun with a group, Theresa and I invited our neighbors Gene and Grace over to sample them too. 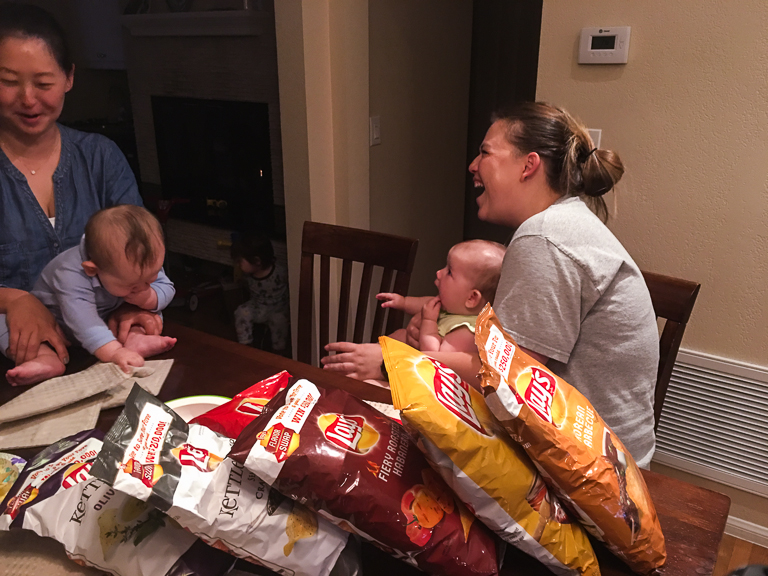 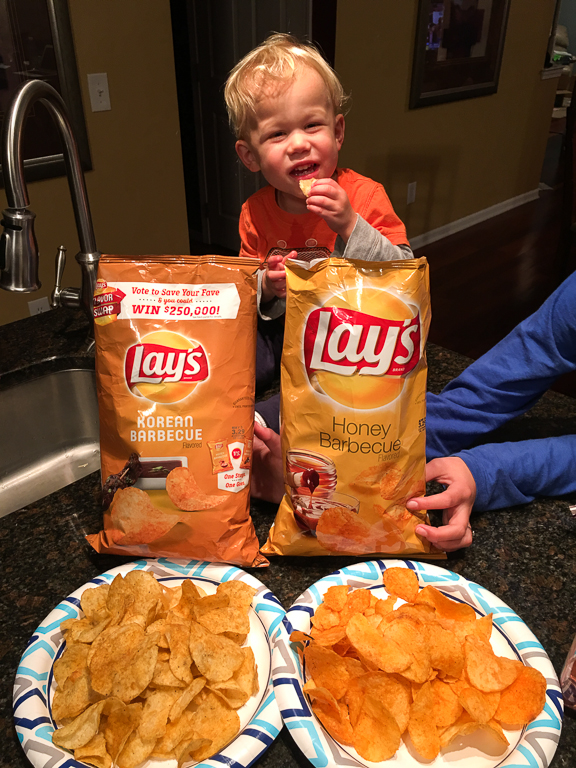 First up is the Cheese Flavor Swap: Lays Cheddar and Sour Cream vs. Smoked Gouda and Chive. 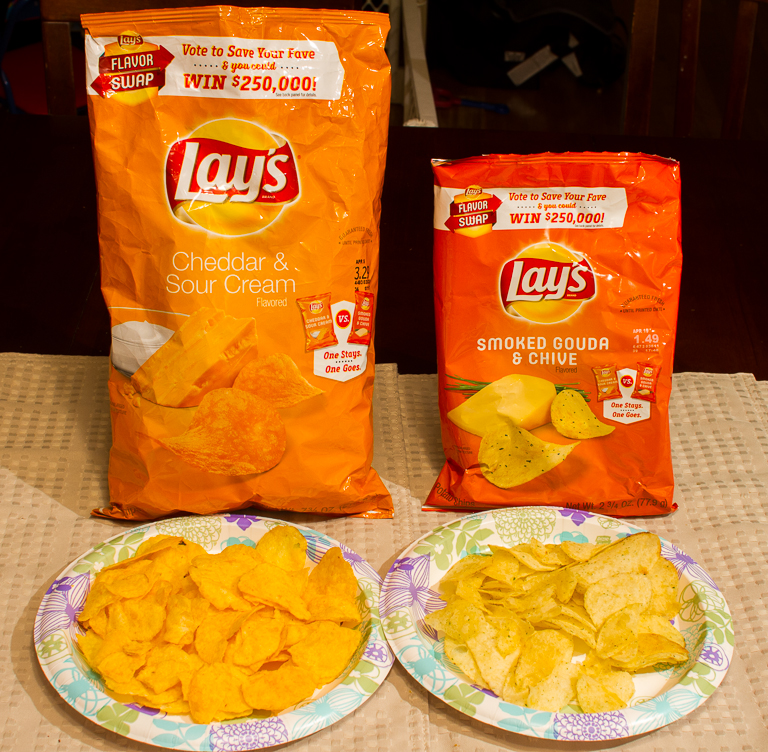 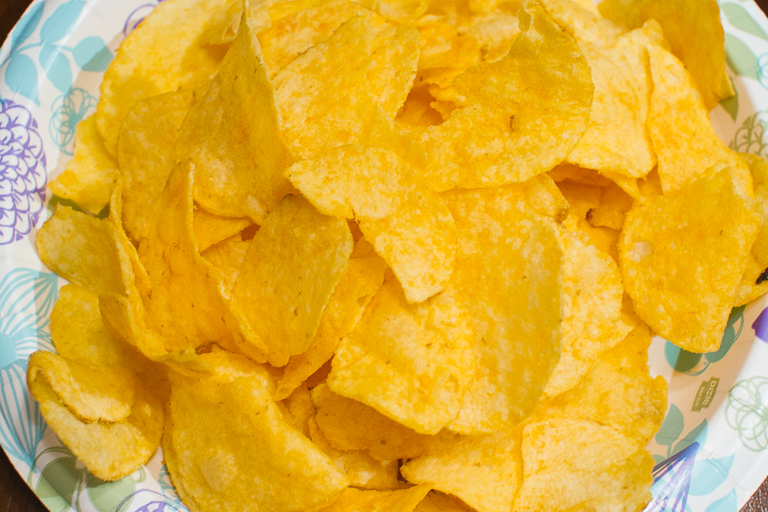 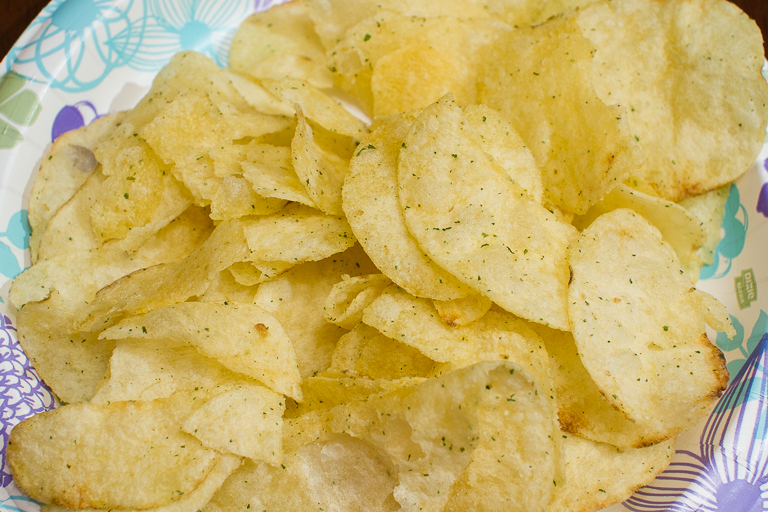 Next was the Barbecue Flavor Swap: Lays Honey BBQ vs Korean BBQ. Between us, it was a good thing they didn't try to swap the KC Masterpiece BBQ because those are the best flavor ever. Anything trying to compete with those would automatically lose. 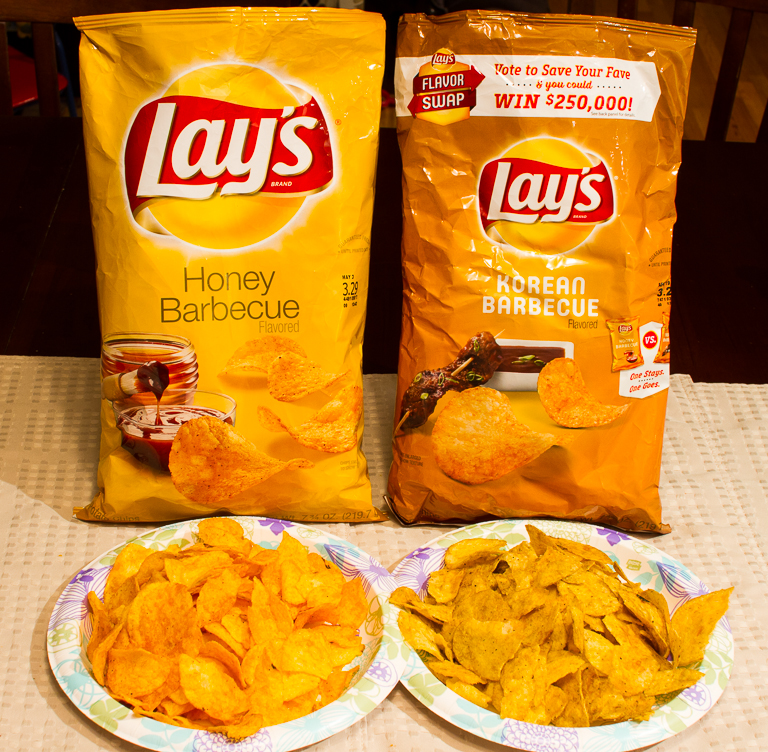 The Honey BBQ Chips were your typical barbecue potato chip. 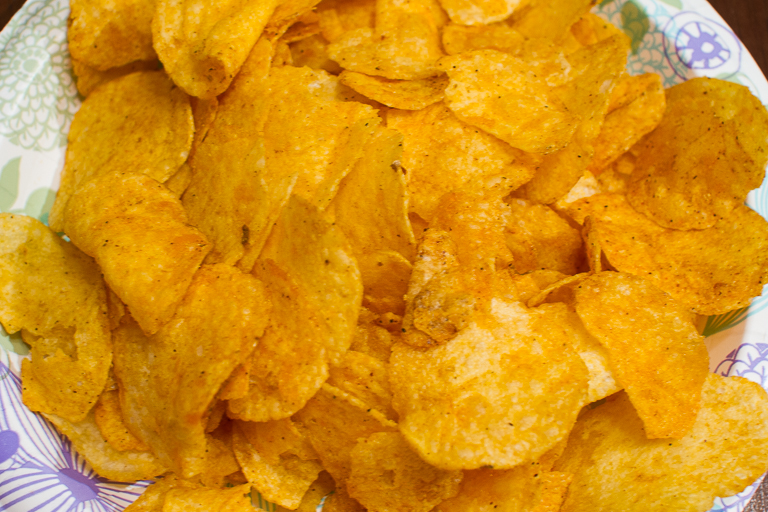 I was pretty excited to try the Korean BBQ chips. Surely they would be delicious, right?
Wrong! Bleh, I thought they tasted way too much like charcoal. It was just a really odd flavor. In our voting, no one liked it. 4 votes for Honey BBQ. 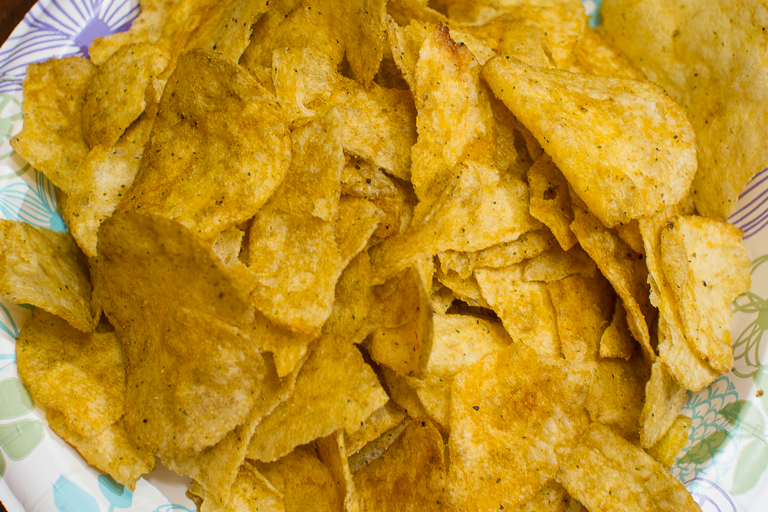 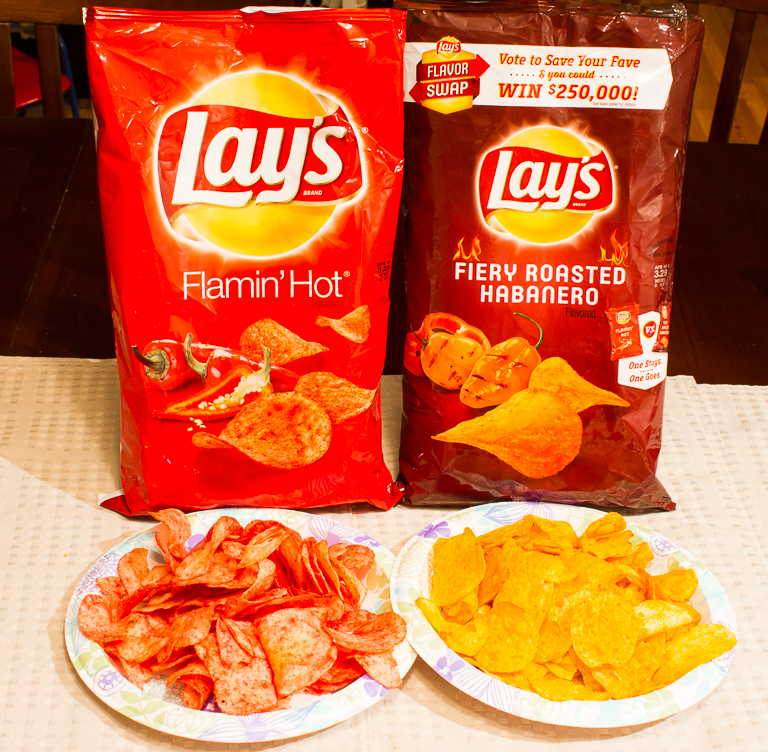 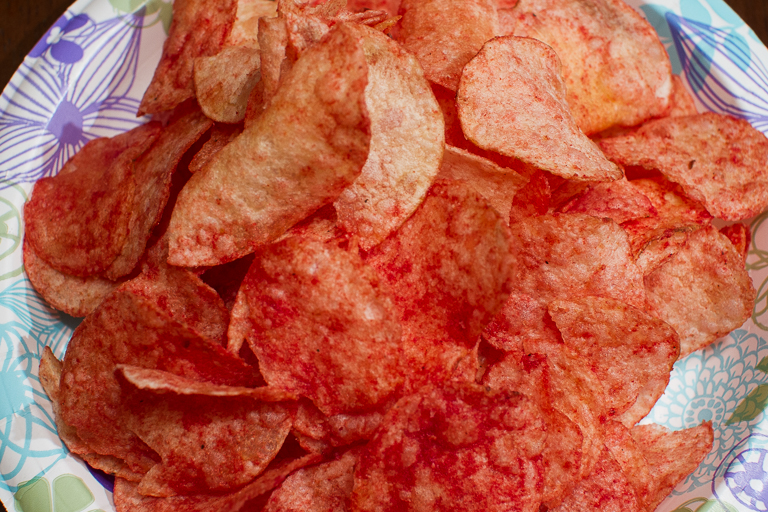 Fiery Roasted Habanero had some heat to it, but also had a more complex flavor than just Flamin' Hot. Theresa asked if she had to vote for either of these, thinking both were bad. That's 3 votes for the Roasted Habanero. 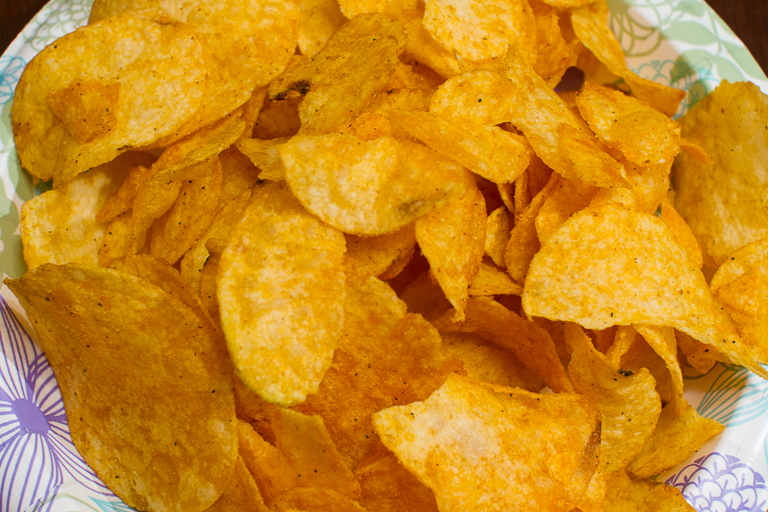 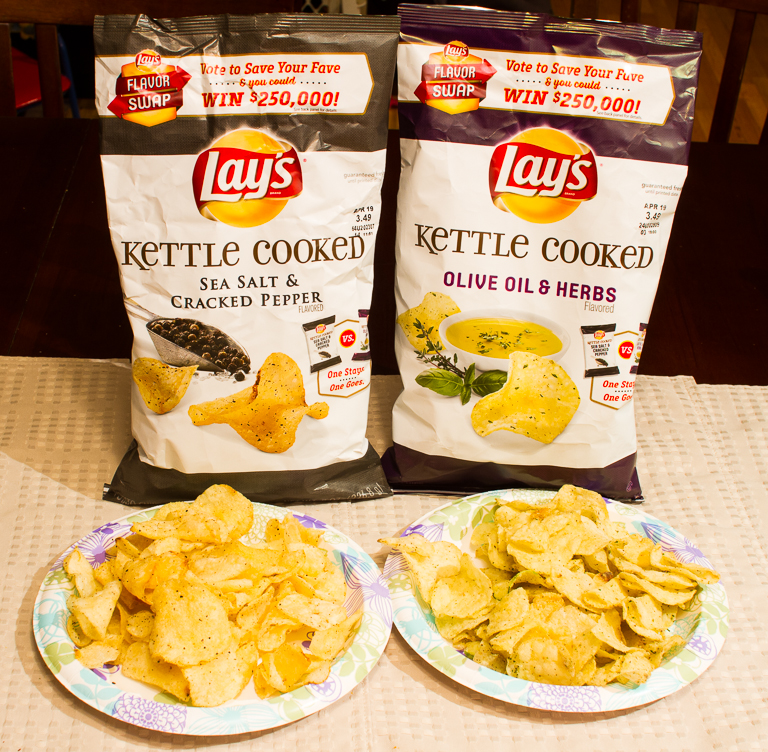 The Sea Salt & Cracked Pepper chips are a favorite of many, and have a strong pepper taste. 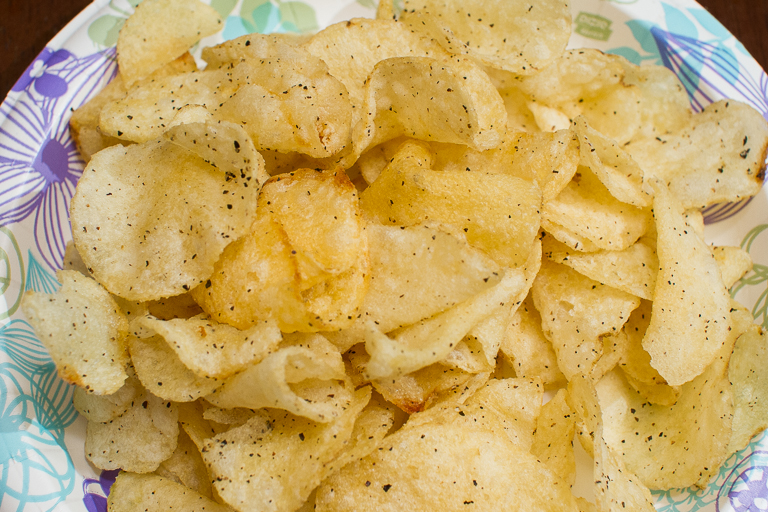 The Olive Oil and Herbs flavor should just be called Rosemary Chips. I liked them, but boy would it be hard to eat more than a few. Again we were split 2-2 for these. 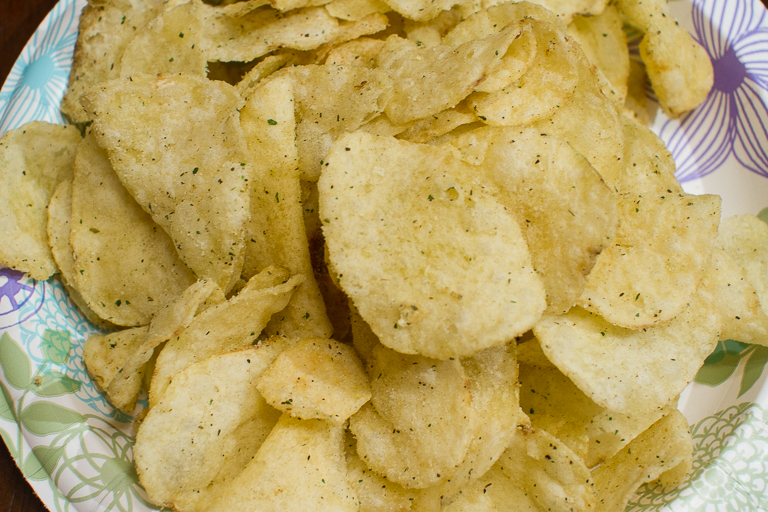 It was a lot harder to find the chips this year, and I wasn't as excited about the flavors as I have been in past years (I'm looking at you Chicken and Waffles and Biscuits and Gravy). I'm hoping next year Lays creates some more off-the-wall flavors.
Now what to do with all these chips? 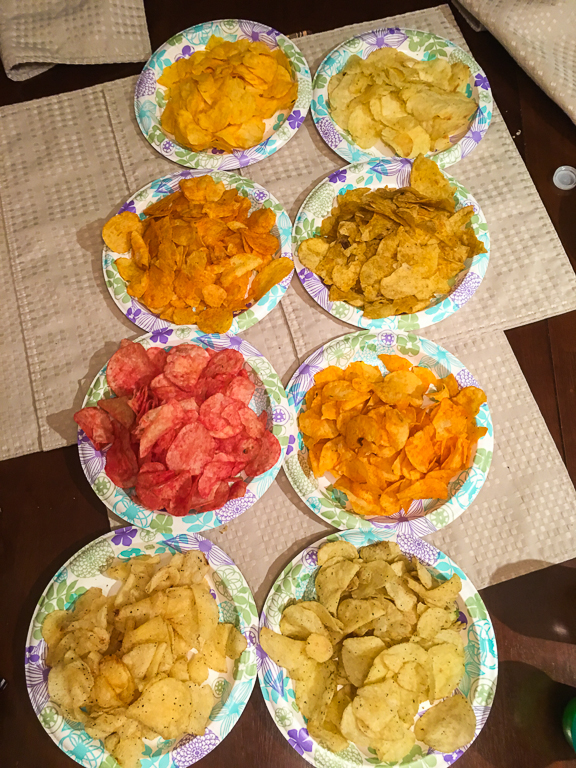