Happy July 4th! Everyone is celebrating today!
Ian has been so excited for July 4th.
Ian - "We're celebrating America's birthday! I'm going to go down the water slide. And throw water balloons. And ride in the bike parade!"
All that excitement meant he was talking to Alli about all these things well after he was supposed to be asleep. And he woke up early in anticipation.
With him up and everyone else getting up, we got an early start on breakfast and had our fill of all types of pancakes, meats, eggs, and hash browns at the Original Pancake House. 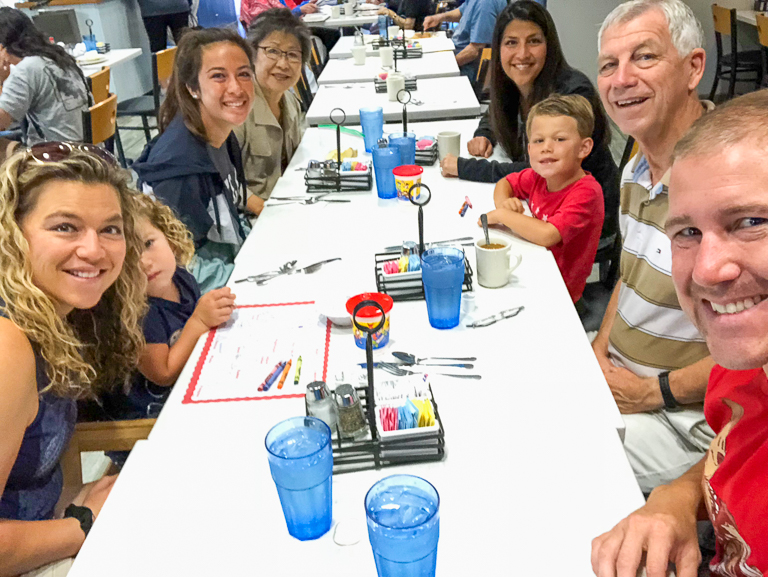 And we got the house all decorated for the neighborhood block party. Now's a great time to bring out my Lego Mickey Mouse mosaic. 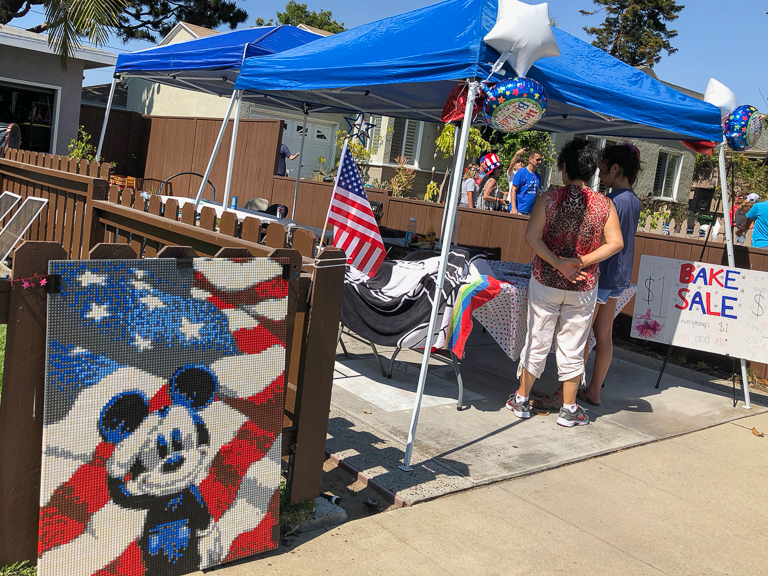 Our little entrepreneurs wanted to make some money during the block party, so with the help of Aubrey they set off making a sign and some treats. 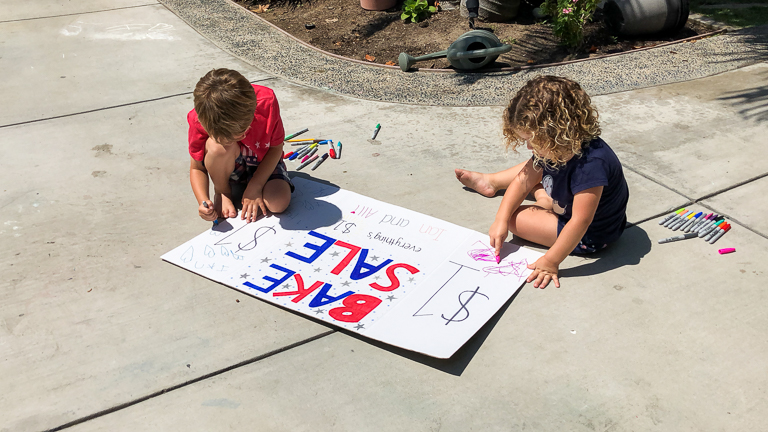 Aubrey cooking things up after the kids help measure the ingredients. 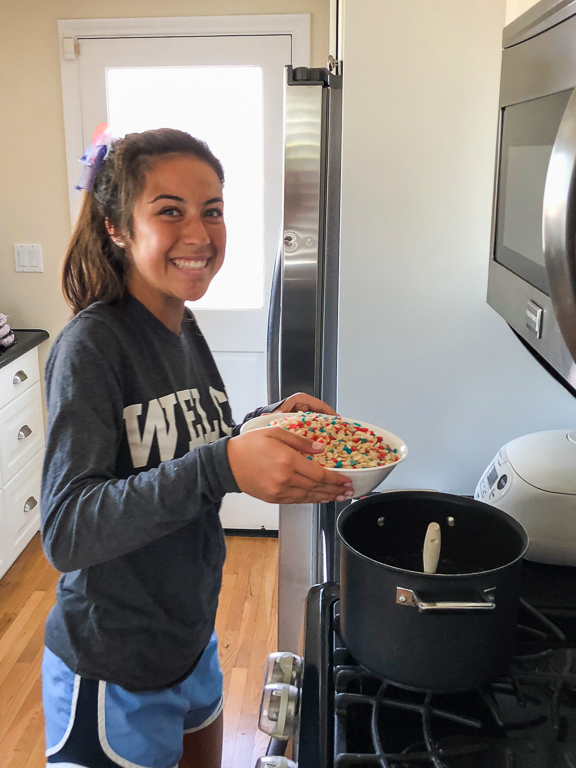 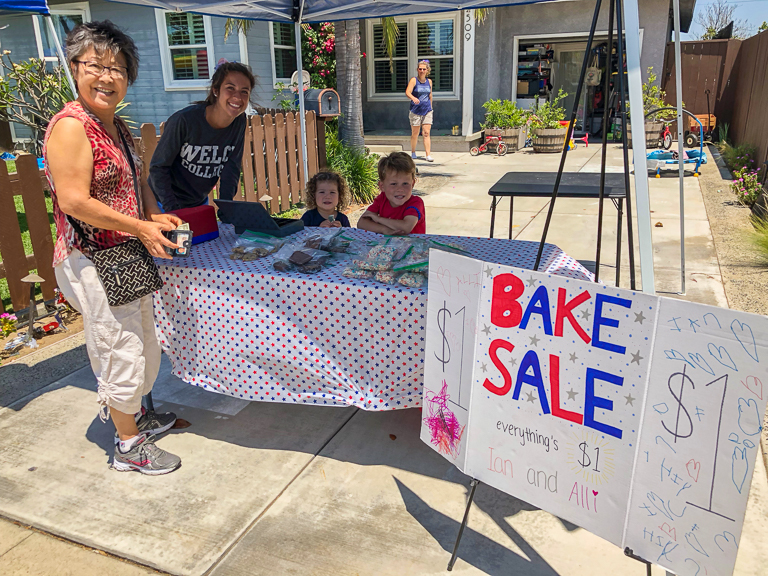 Handling the money. Ian has his addition down pretty well. Still working on the subtraction (to make change for bigger bills). 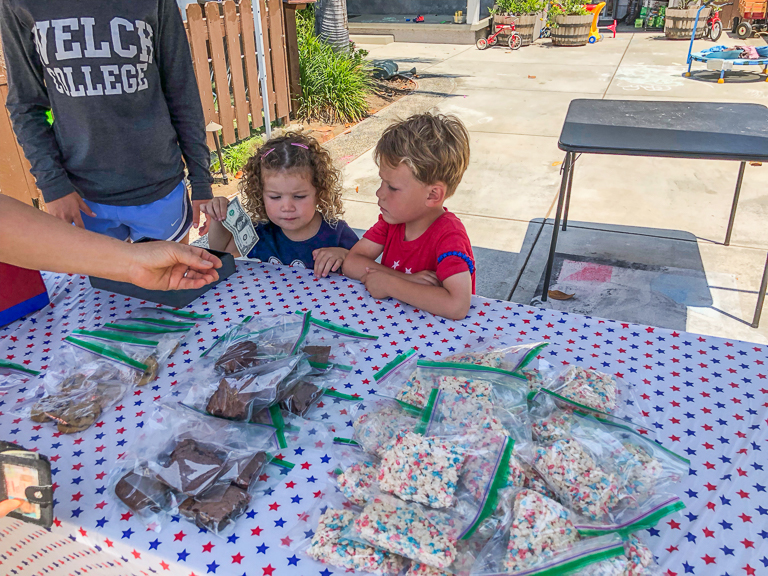 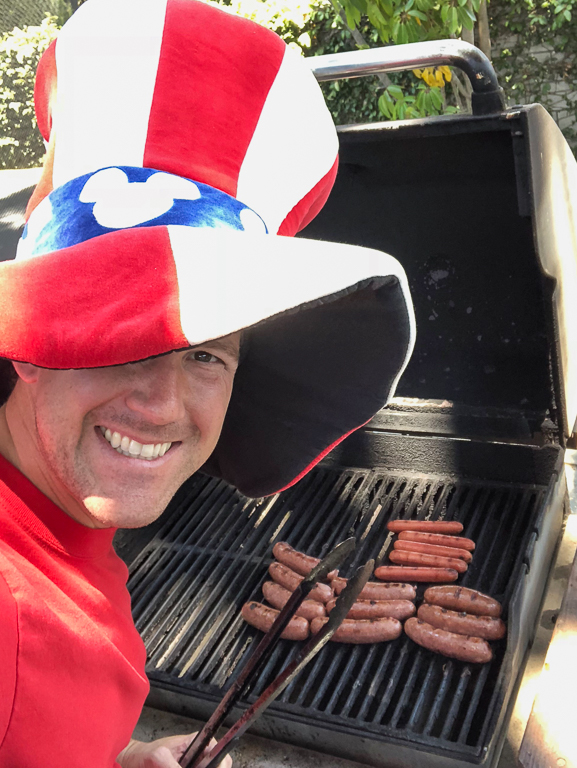 Where's that waterslide the kids have been asking about? They were both initially excited. Alli lost her nerve about halfway up the stairs. 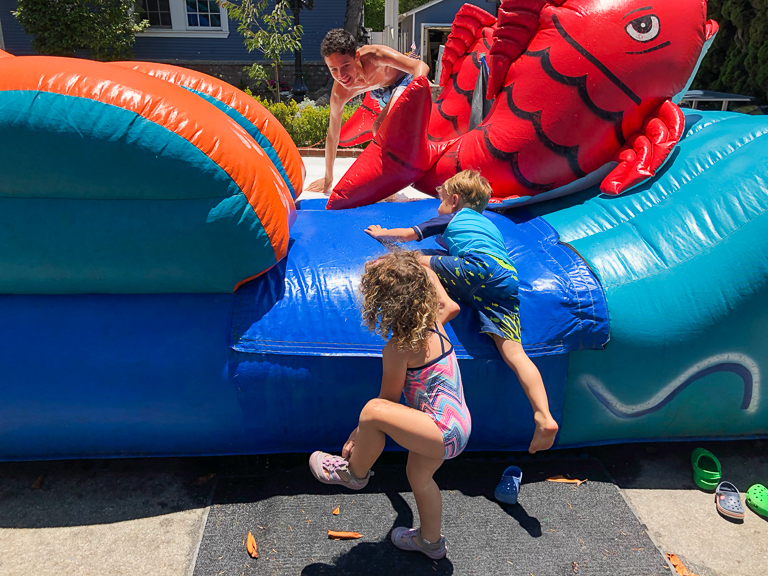 Eventually Alli made her way all the way up, but then wouldn't slide down. Guess I'm getting wet today too. In the end, me and Alli went down together 3 times.
Ian had no fears. He was on a loop going down the slide, up the stairs, again and again, only stopping when we told him it was time to go. If every round trip took a minute, I bet he went down this slide at least 60 times today. 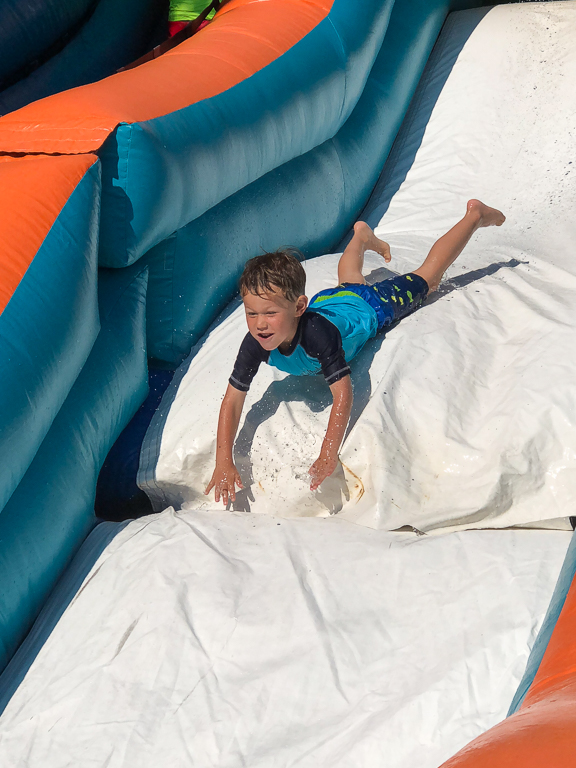 Along with the waterslide, the police stop by with a cruiser, and a fire truck stops by too. 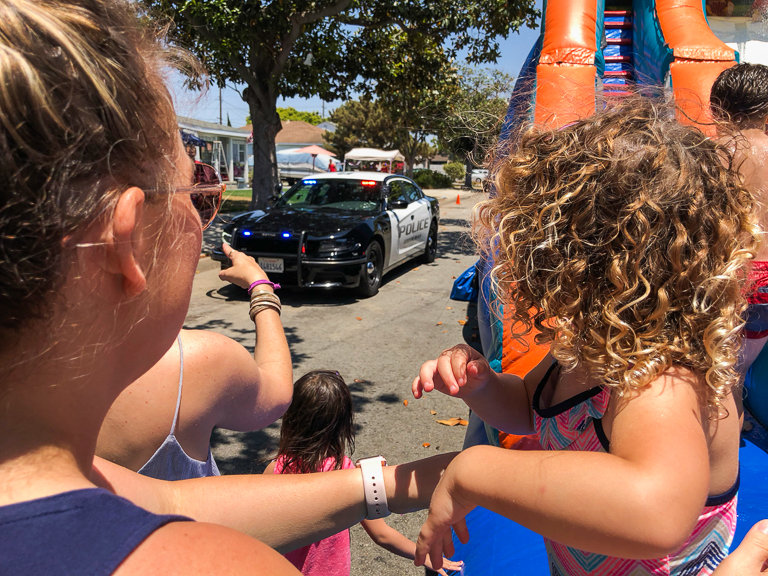 And here's a police support dog. Complete with a badge. 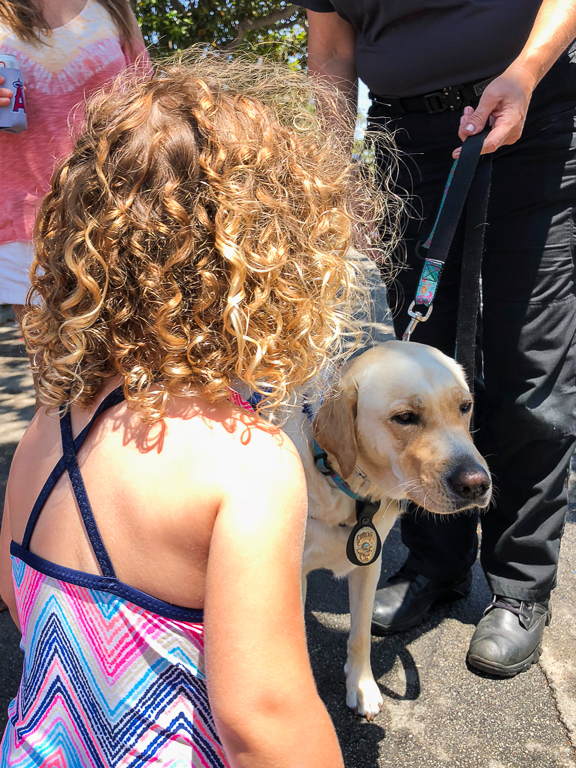 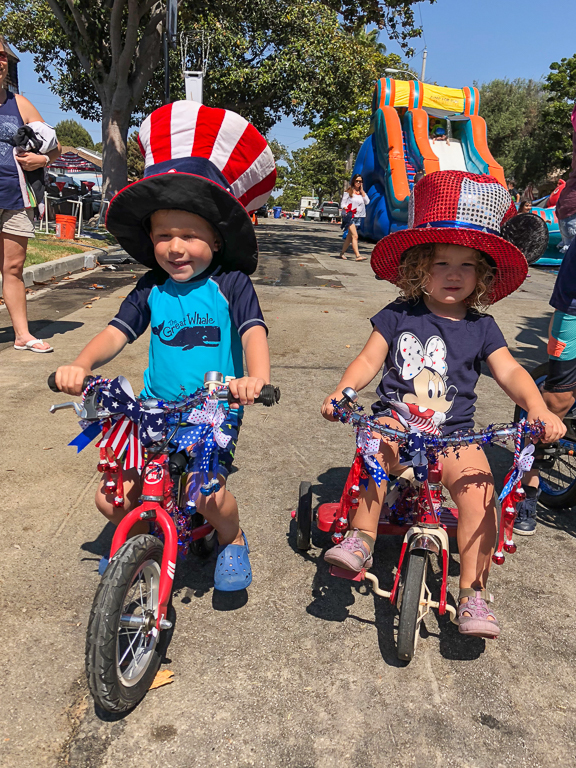 Riding down the street, everyone is waving and cheering and taking pictures. 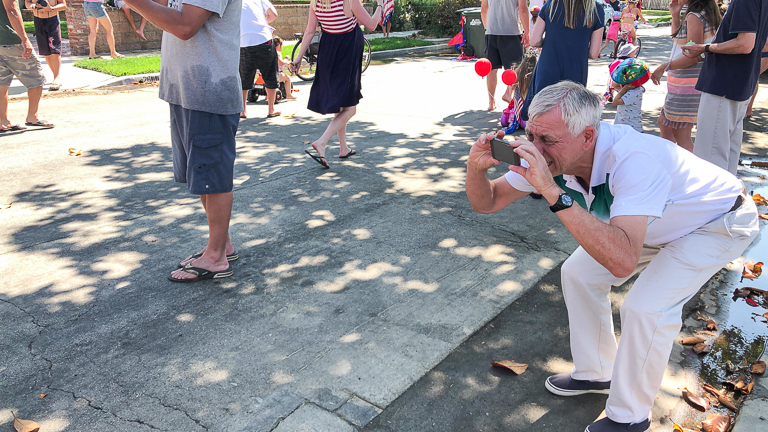 Waving to the crowd. 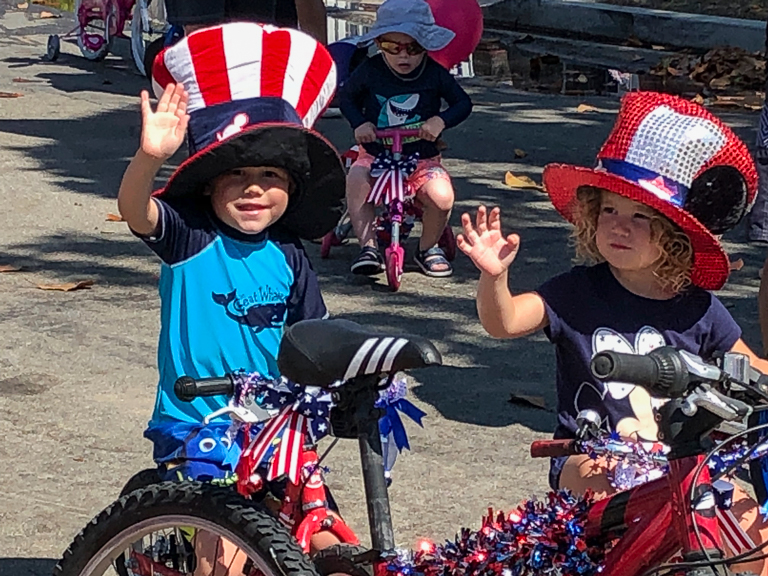 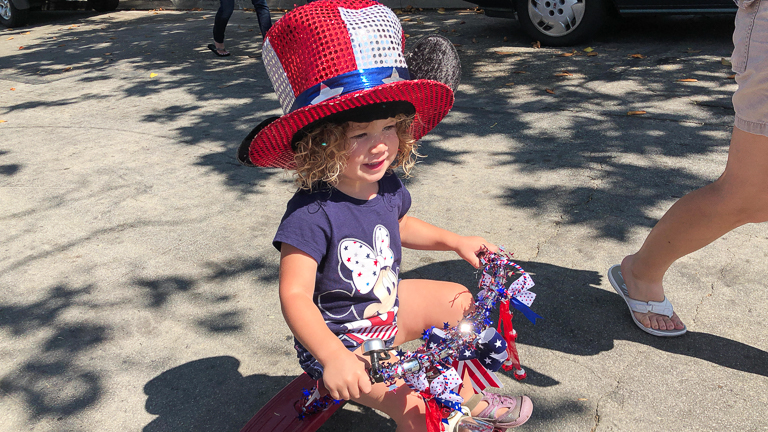 Following the bike parade was a piñata. Ian was really excited and was quick to line up. 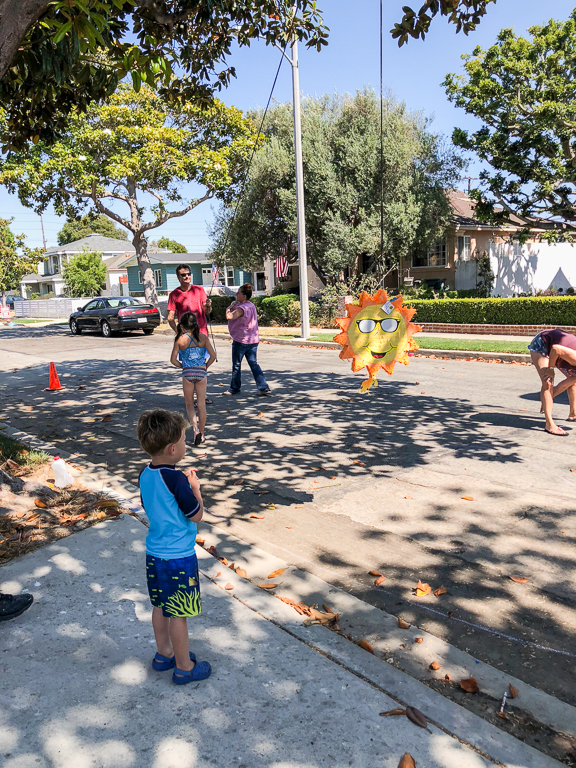 Lining up smallest to tallest. That seems fair. Alli happened to be the smallest. 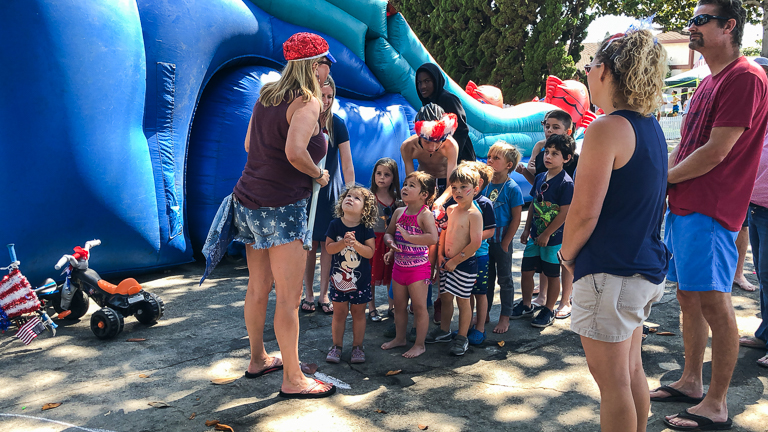 But she's got a pretty good swing.
Ian was such a little Hercules that he broke the bat!

The kids enjoyed the street being blocked off and being able to ride around in the wide open space.

No fourth of July is complete without a few explosions. Poppers and Party Poppers! Hooray! 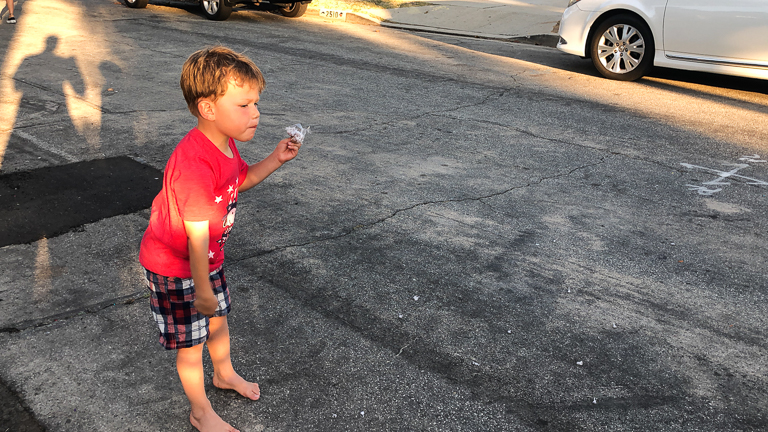 Counting up their money at the end of the day, I think they took in something like $38. Eventually we'll teach them about the cost of ingredients, time spent making things, etc, but for now, they were thrilled that they had made their own money. 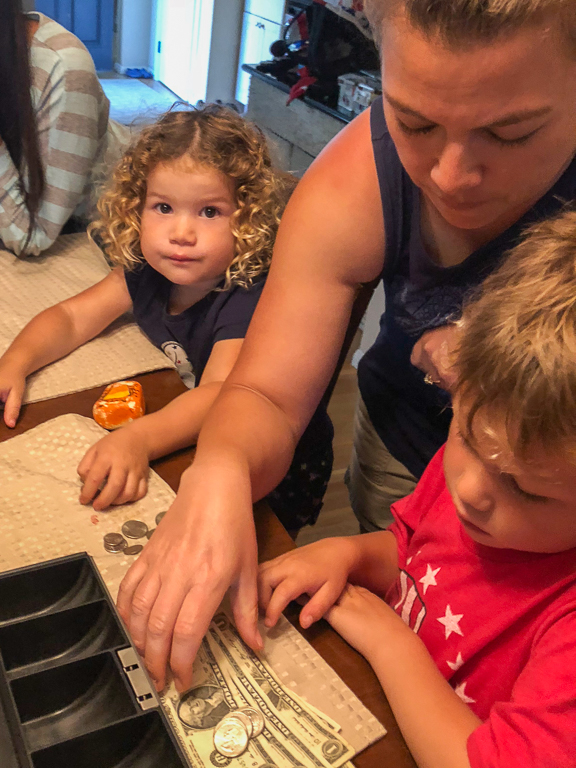 It was a great day of hanging out with neighbors, playing with the kids, and just being outside with nothing in particular to do. Happy 4th!
Posted by Joe at 2:00 PM