Today was just a quick visit over to Disneyland. Both parks opened up at 8am today, but we had a slow morning getting ready and didn't leave the house until late. That meant we didn't get to the parks until 9:30am.
Our hats today are classic Disney character ball caps. Some version of Goofy and Pluto has been around for years and years. Goofy, Pluto and Donald can all still be found around the parks. Mickey however is unique, in that I can't remember seeing another one. He's definitely part of the set though. He's winking just like Pluto. 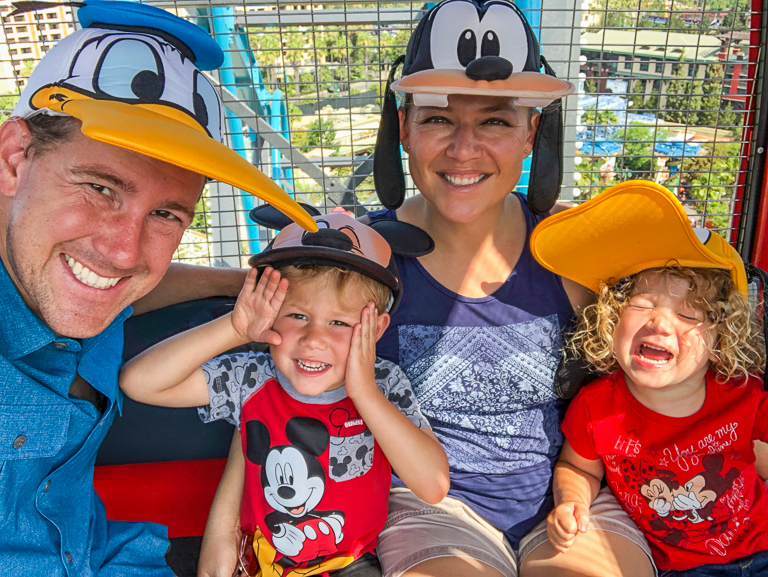 Our very first ride of the day is usually Mater or Luigi, but today both kids wanted to head over to the Pixar Pal Around (aka Mickey's Fun Wheel). It was posting a 20 minute wait, but it's only going to get worse as the day goes on. 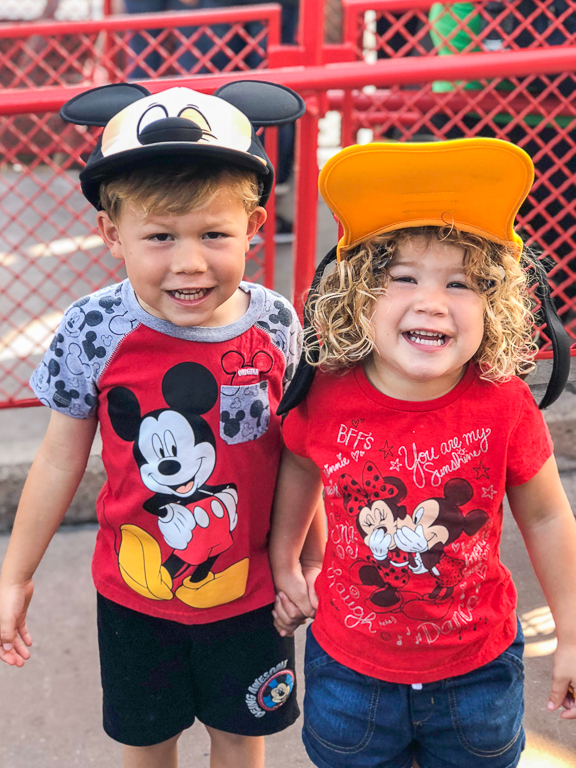 A better look at those Mickey and Pluto hats. Pretty cute and definitely not as hot as those snowmen hats we were wearing last week. 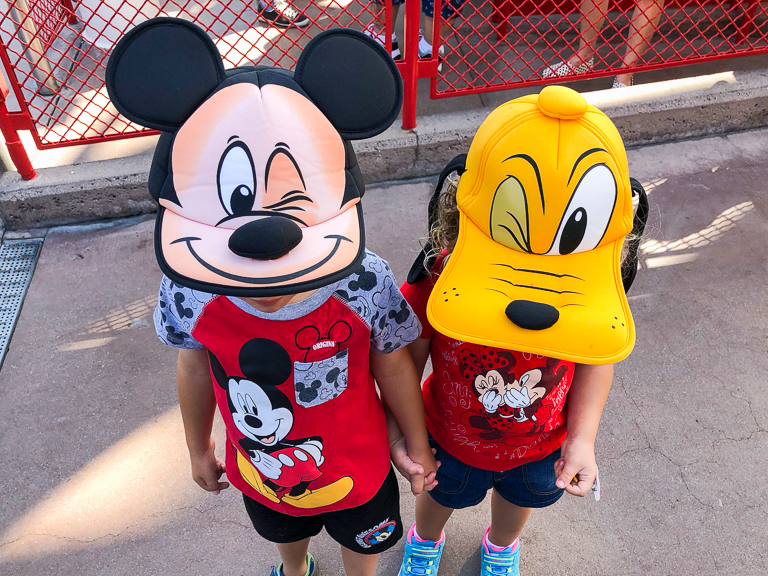 I love how cast members have stickers to hand out. My kids always smile for stickers. 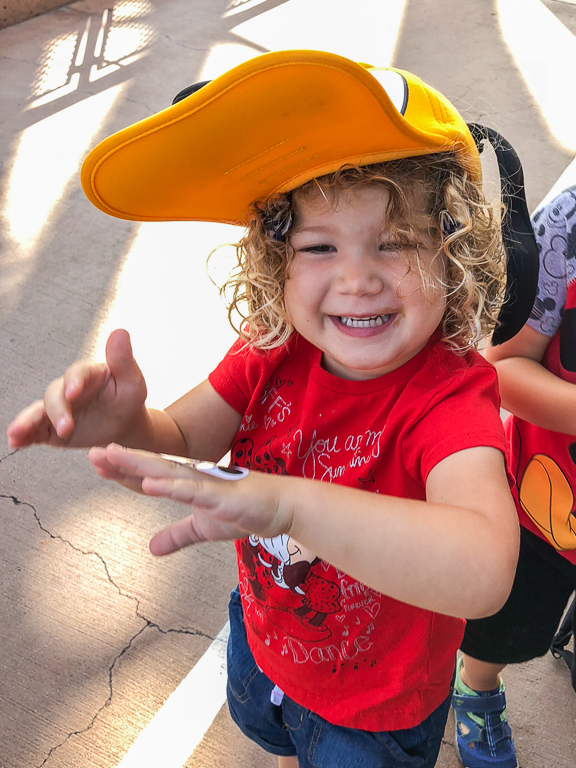 Mommy brought a special treat! She found our regular Goldfish cheese crackers but with Mickey Mouse shapes! That makes them taste even better!
The Pal Around is just a re-skin of the old Mickey's Fun Wheel. But as part of that re-skin all the gondolas have new characters on them. The kids enjoyed naming the characters as they went by. 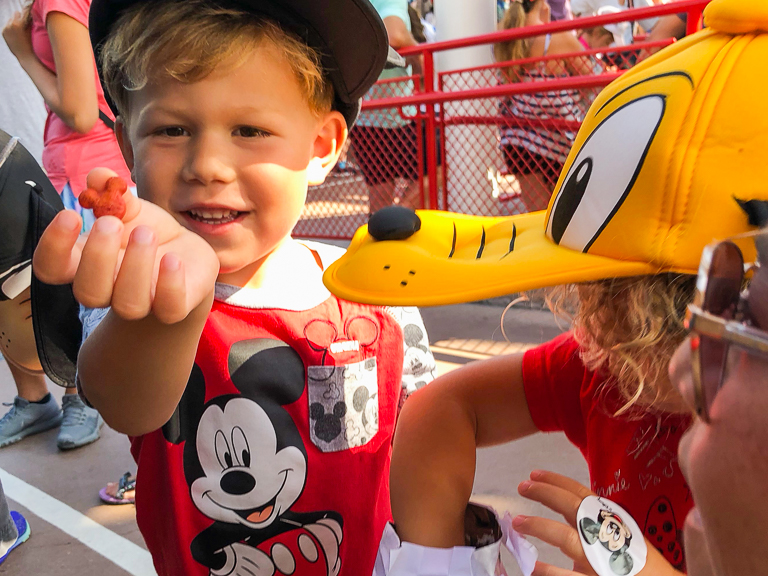 Getting up in the air on the fun wheel in the Lightning McQueen gondola. The water in Paradise Bay isn't looking so hot right now. 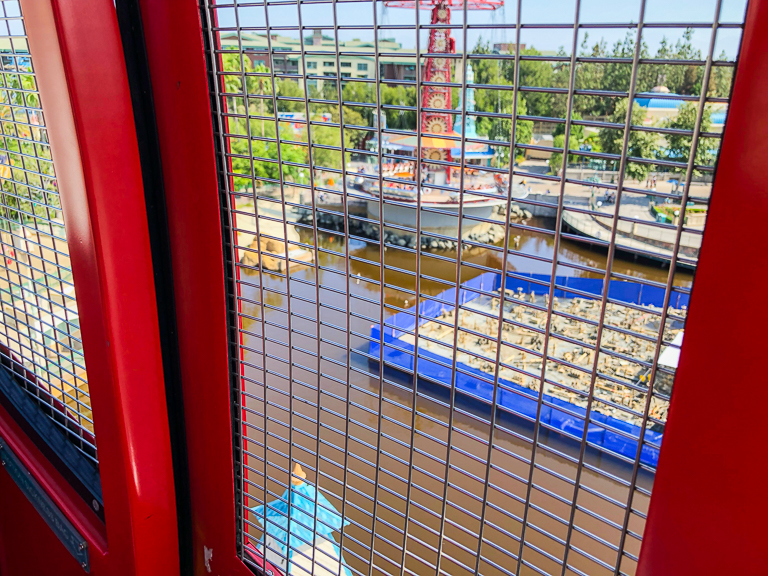 Both Ian and Alli looking for Jack-Jack on a stick near the Incredicoaster. 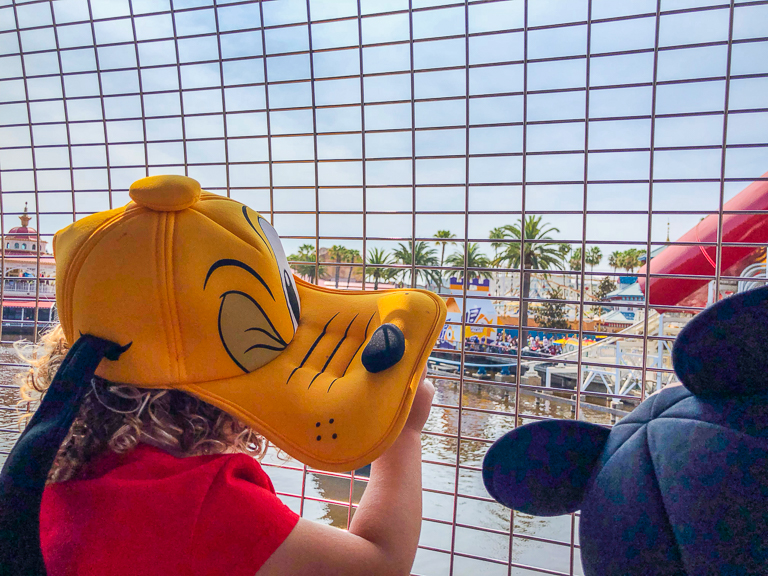 While Alli snacked on cucumbers, Ian and I used a fastpass for Goofy's Sky School. 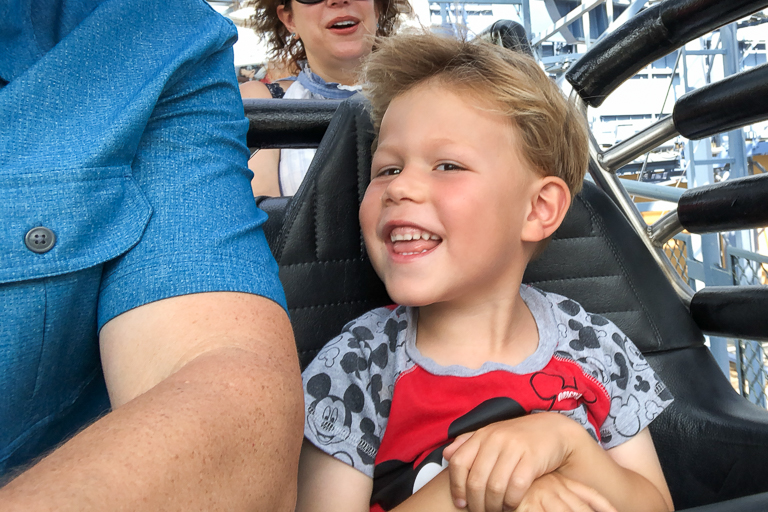 He loves it! Hands in the air the whole time, and I love the crazy hair look at the end.

I'm always curious why there are long lines when the fastpass return time is just 10 minutes in the future. With the 5 minute grace period that you can arrive early, Ian and I checked in with T and Alli and then went right back around for another spin on the Sky School. 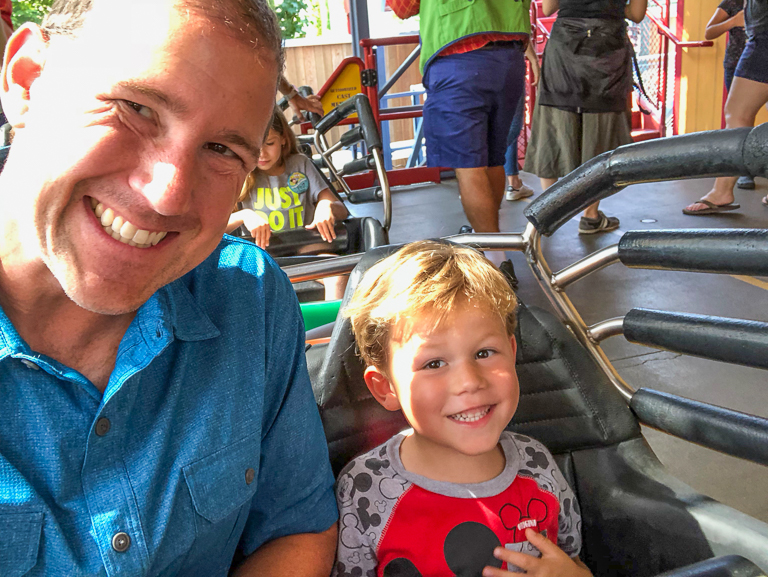 By that time, the fastpass I picked up right when we got to the park for Toy Story Mania was up. The kids are funny with their hats and glasses. 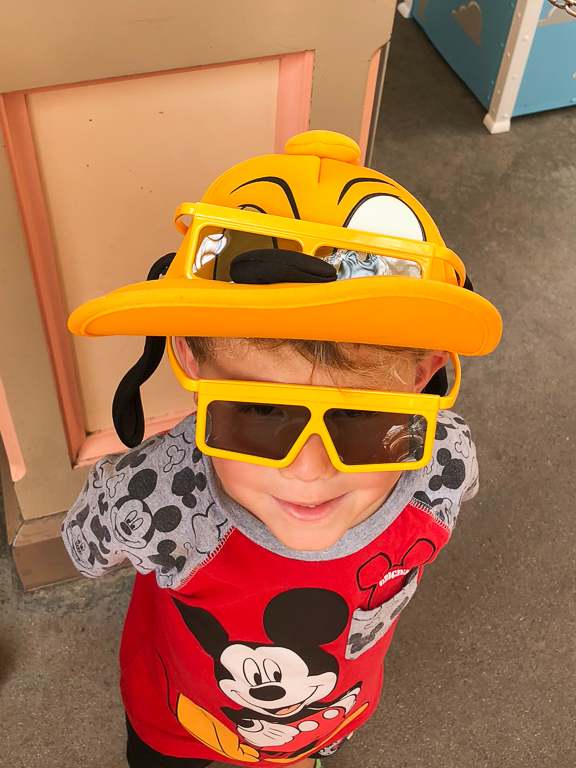 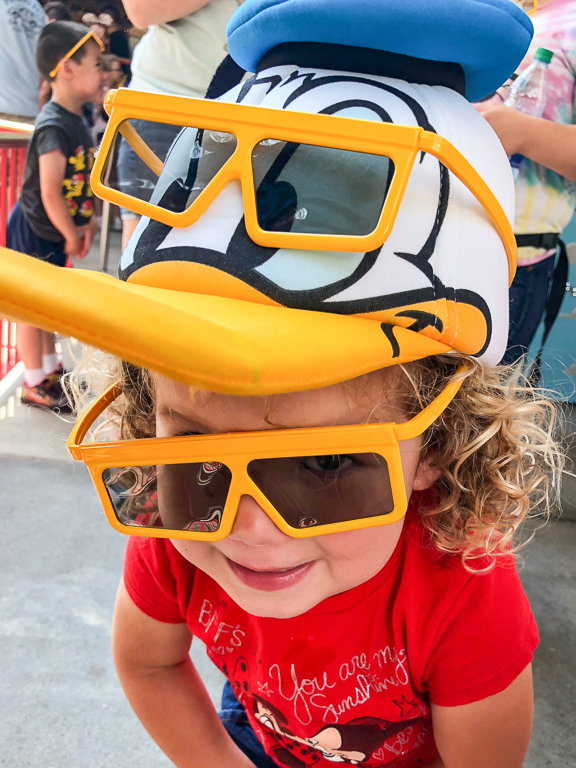 I didn't do half bad. T did even better, getting the high score for our group. But I was most impressed by Alli! She's really starting to get it, and I even saw her hit some 5000 point targets! 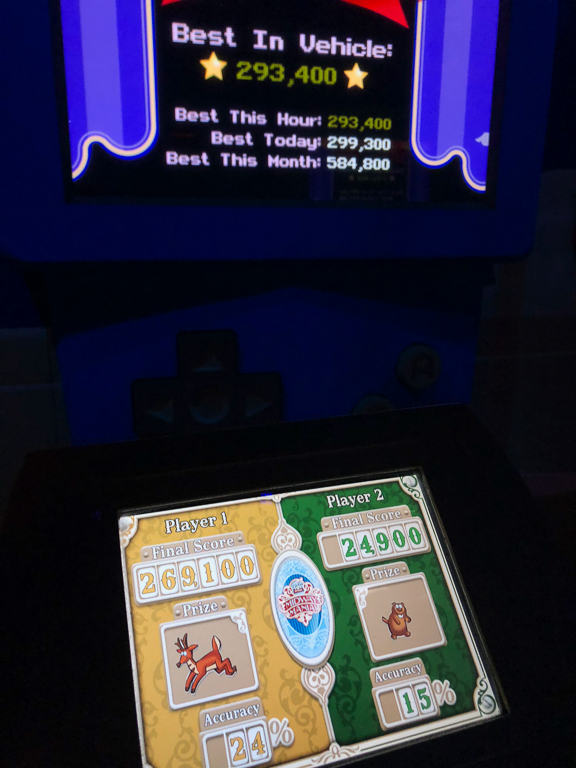 I asked her to show me her technique. Eh... In the end, I couldn't justify paying $10 for 3 chicken legs (and coleslaw that no one wants to eat). 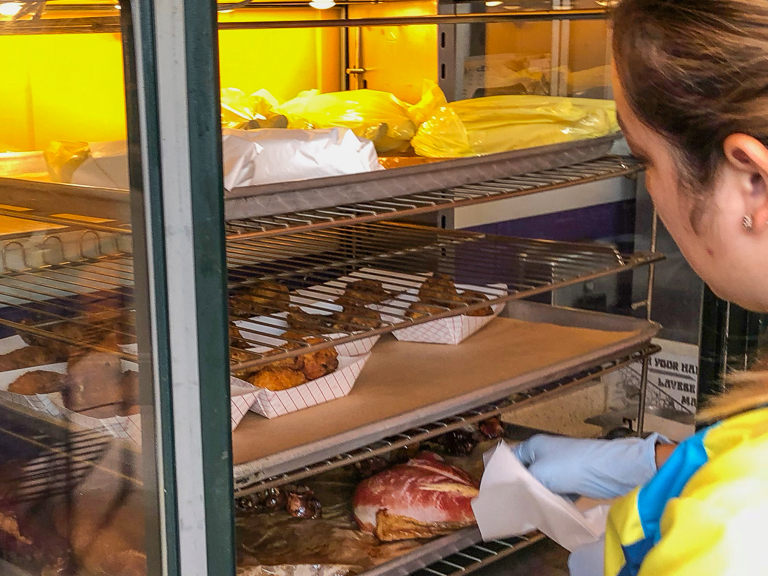 Walking back around paradise bay, Ariel was nearly a walk-on, so who can resist. 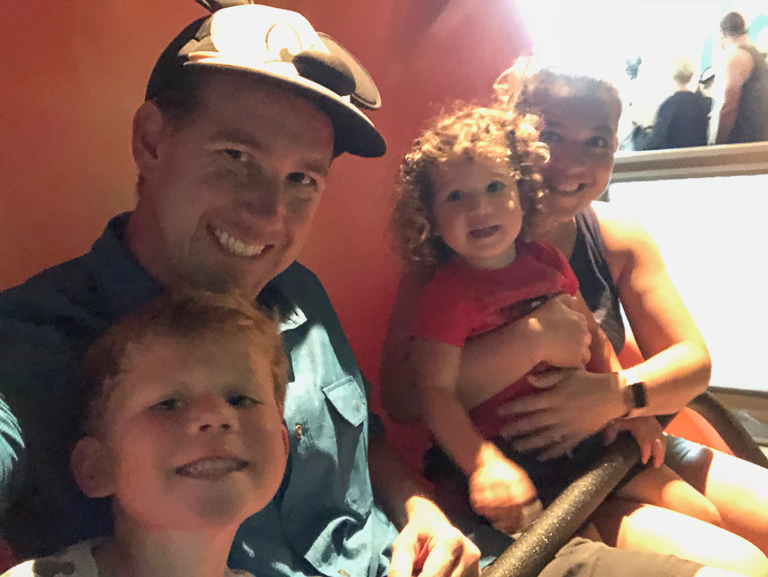 Now there's a good value for lunch. At the Pacific Wharf Cafe of course you can get soup in a bread bowl for $11.49. But did you know you can get an even bigger loaf of sourdough bread for just $5.19? With an AP discount it ends up being less than $5! There's lot of butter available and it can easily feed 2-3 people. Eating bread and butter for a meal reminds me of my college days. 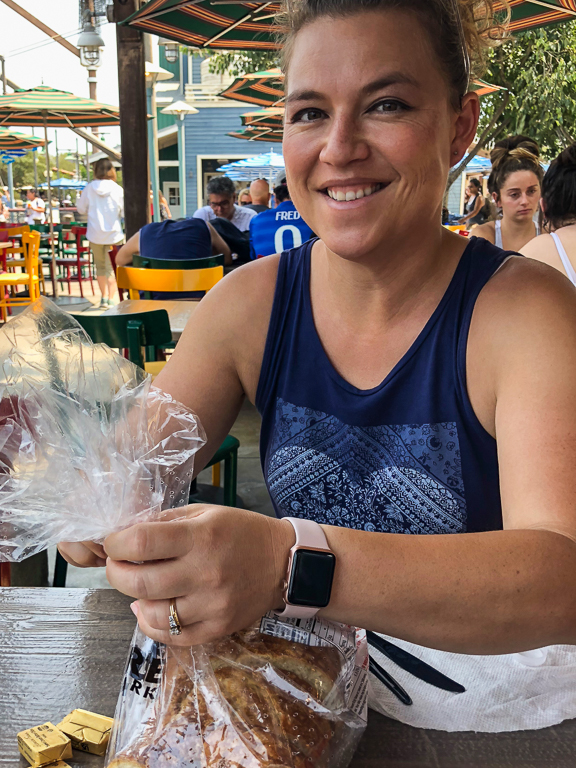 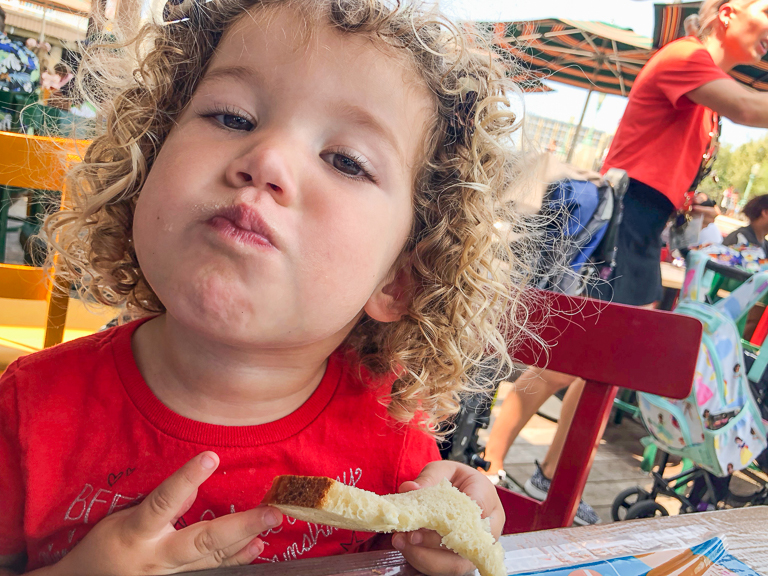 Ian said that he's saving his "bread skin" for the ducks. 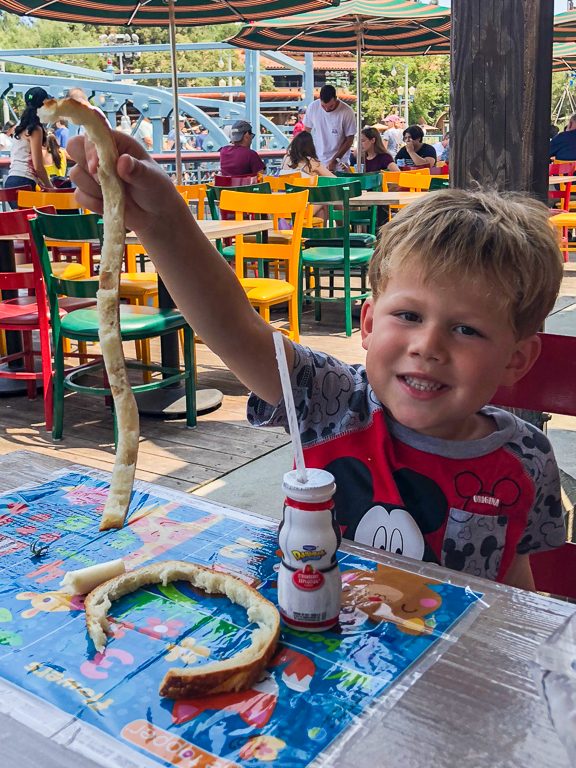 The nearby waterfowl ready to fulfill their duty. Accepting bread from kids. 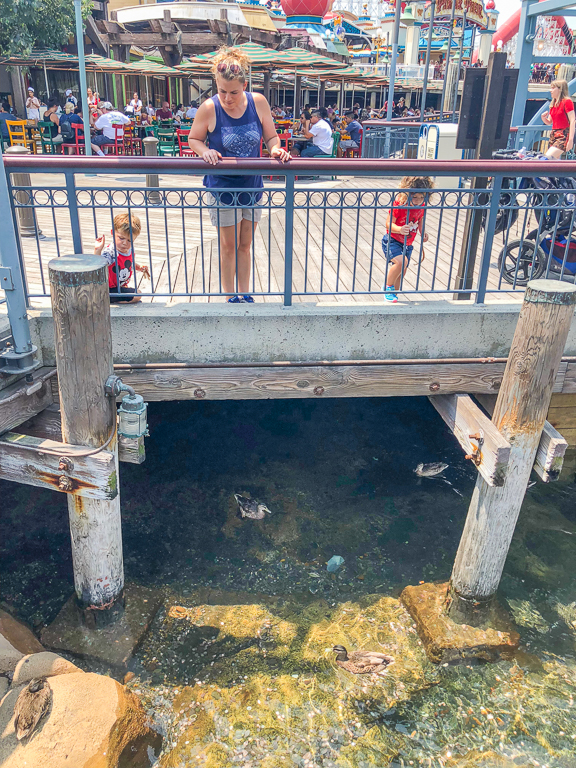 Time to redeem another FP for Toy Story. Switching kids, I rode with Ian this time. Our scores weren't anything special, but it was fun seeing him open up hidden things. Like making the volcano erupts all by himself during the balloon pop screen. And together we were even able to make the robot appear while we were launching rings at the little green men. 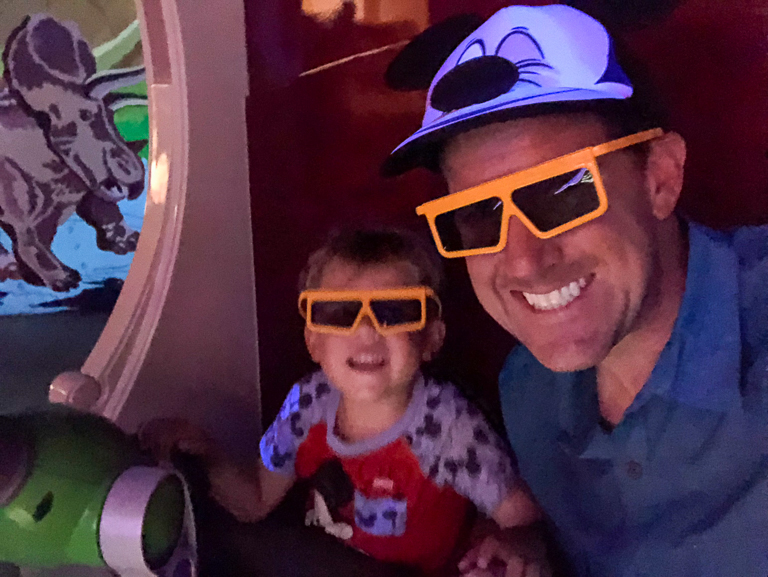 Time to start wrapping up our day. Mater had a nice short line. Alli accomplished her goal of riding a blue-eyed baby tractor and Ian got his green-eyed tractor. 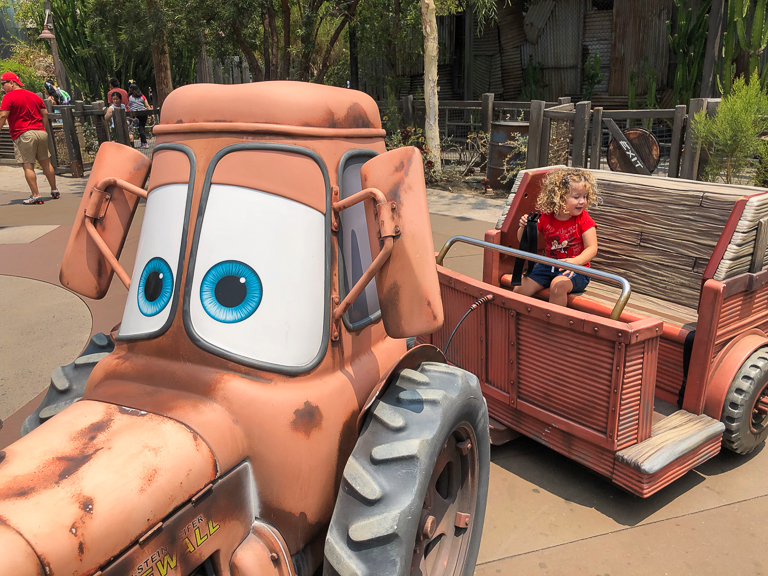 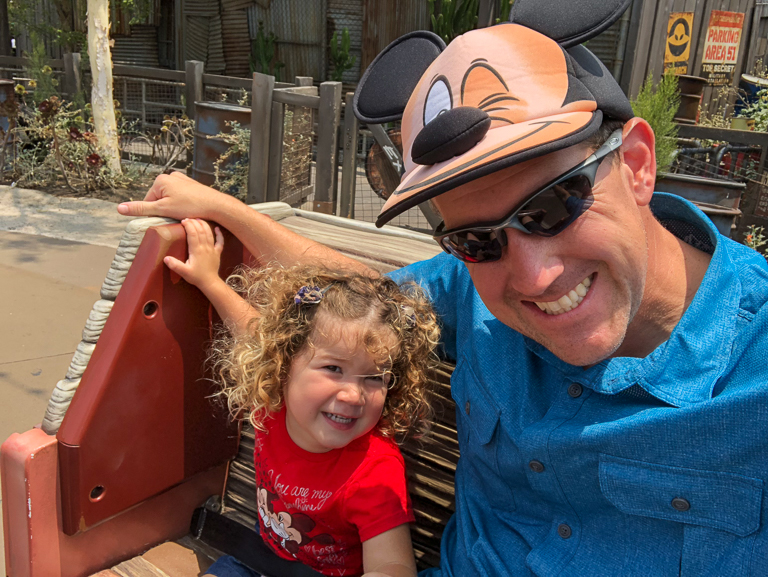 Luigi's line was backed up into the entrance queue. We'll save that for another day. Instead Bug's Land will wrap up this trip. Lines are starting to back up, but the Lady Bug Boogie isn't too bad.
Ian has a knack for finding bugs apparently. He found a roly-poly here on a previous trip and we took it for a ride. Today he found another (Ian - Or maybe it's the same one) roly-poly while waiting in line. 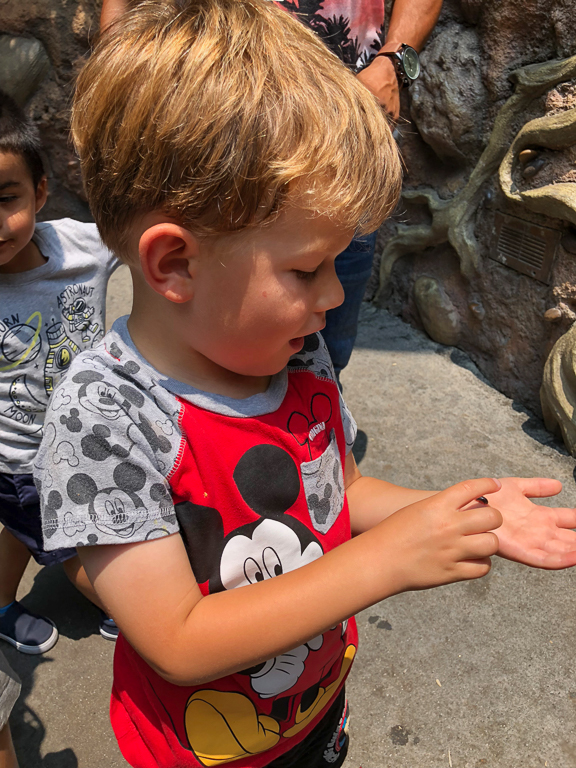 Ian named him Flik Flutie, for some reason known to him, and he rode in the center of our lady bug while we spun. 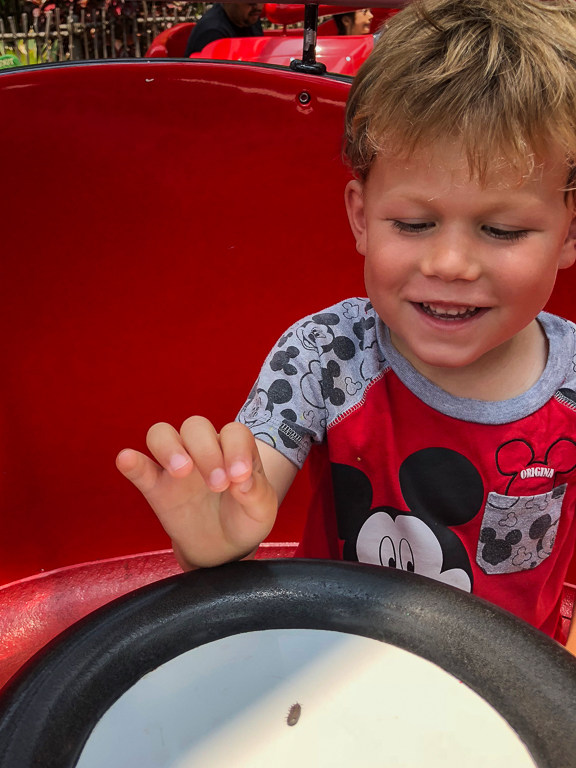 Ian wanted to show Flik Flutie his home, but agreed that Flik Flutie should probably stay at his home in Disneyland. 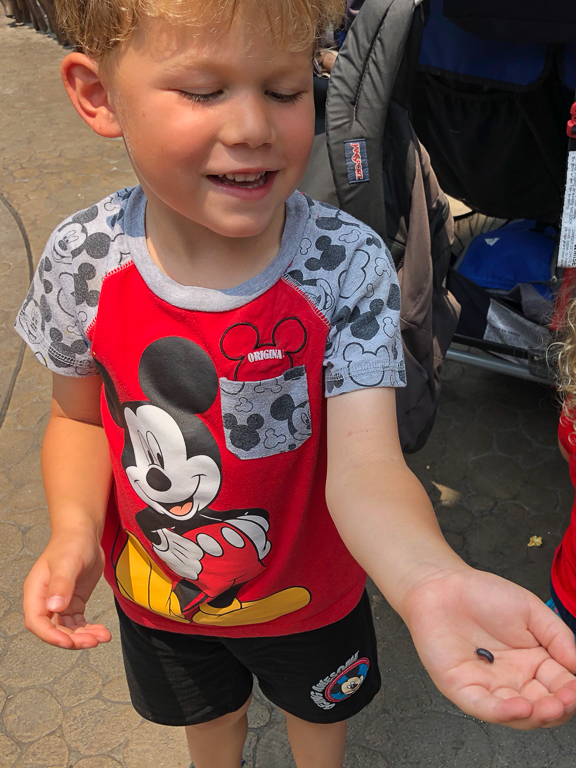 Saying goodbye and letting him go back home. 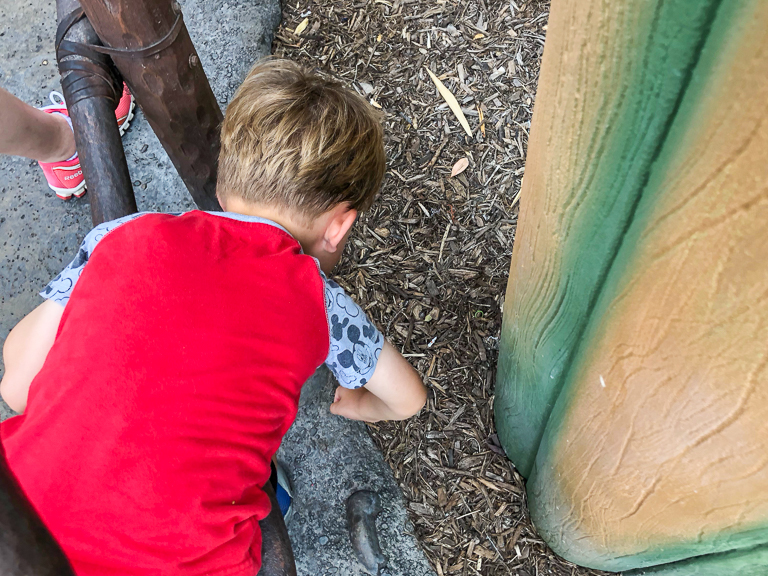 Time to head home and run some errands. Just a quick 4 hours in the park today, but any time at Disneyland is a fun time.
Posted by Joe at 11:30 PM