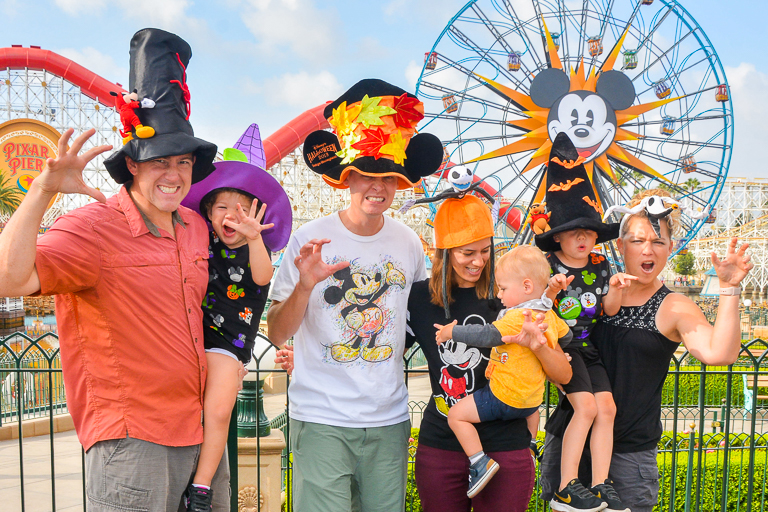 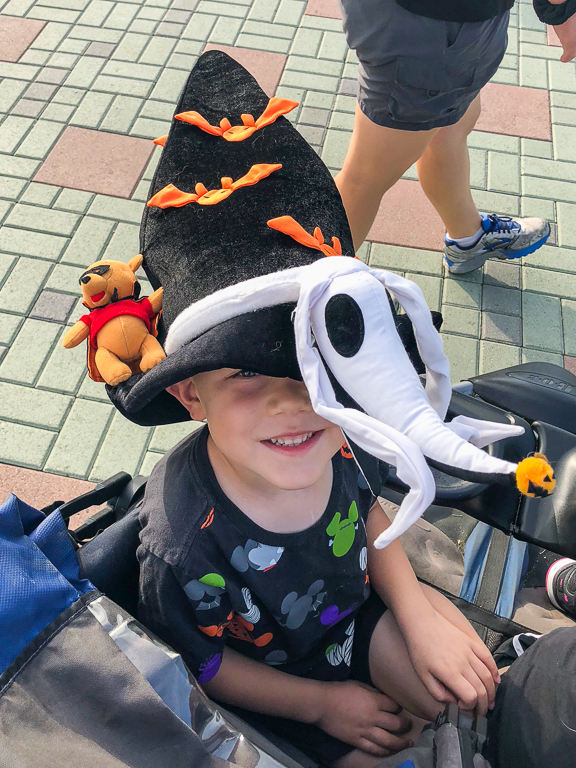 Today we were a little late getting to the park. It opened at 8am today but we didn't arrive until 9am. 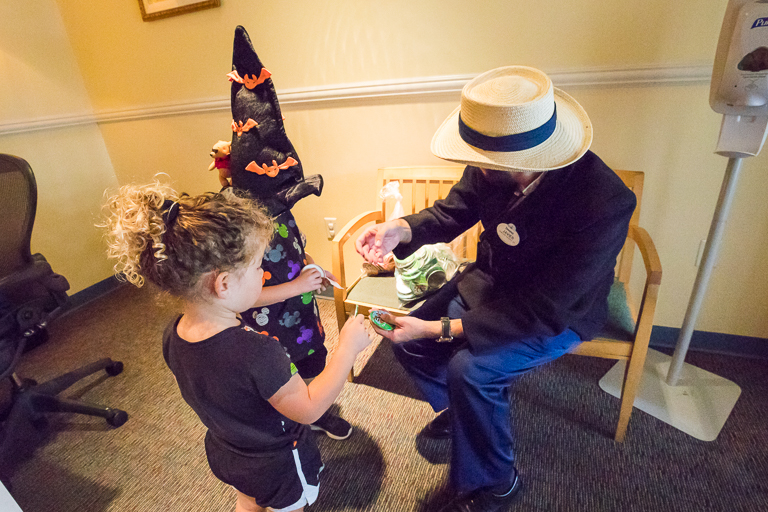 I do enjoy getting to be in the occasional photo, so when I see a free photopass photographer I'll usually stop. 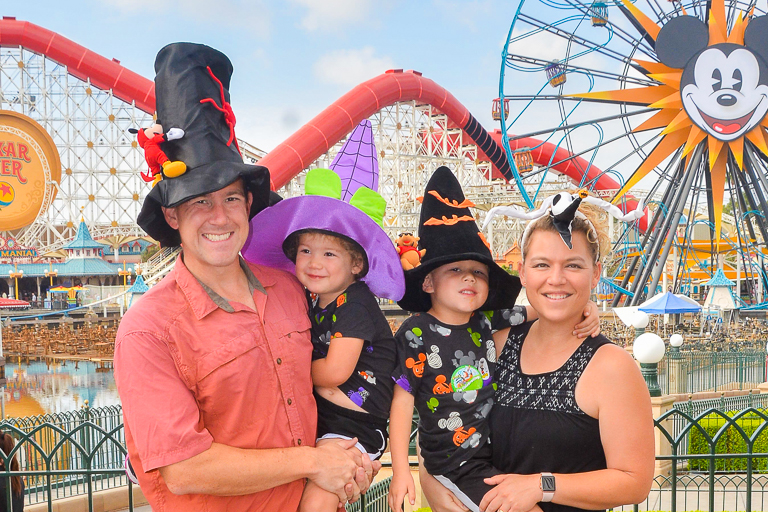 The park is starting to get crowded, plus there's a little one with us, so we're a little more limited in what we can do. Everyone grabbed a fastpass for Toy Story Midway Mania then continued along the pier to the Pixar Pal-Around. Ian's so happy to ride that he's skipping his way down the ramp. 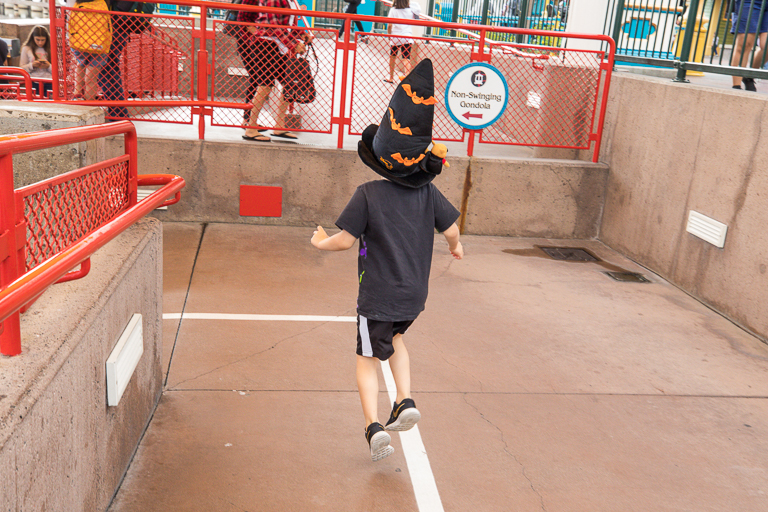 After a 15 minute wait, it was time to ride. Non-swinging today, to the dismay of Ian. 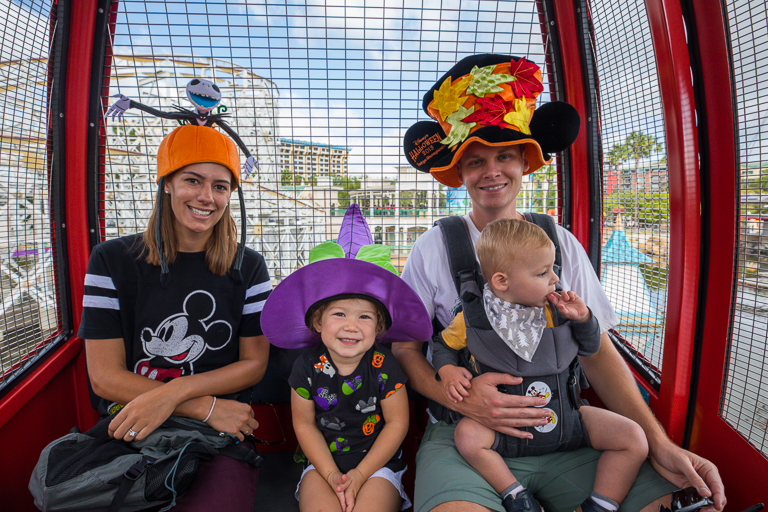 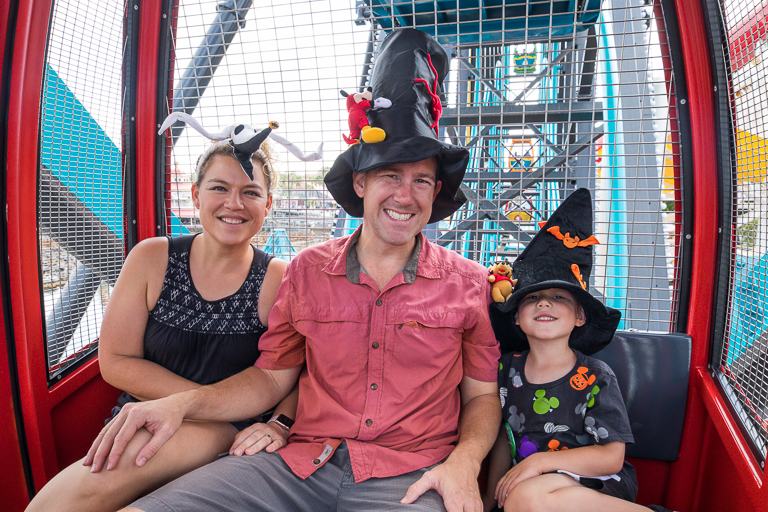 After swinging on the Pal-Around, those who didn't get motion-sick flew around on the Golden Zephyr. The kids always like riding by themselves. 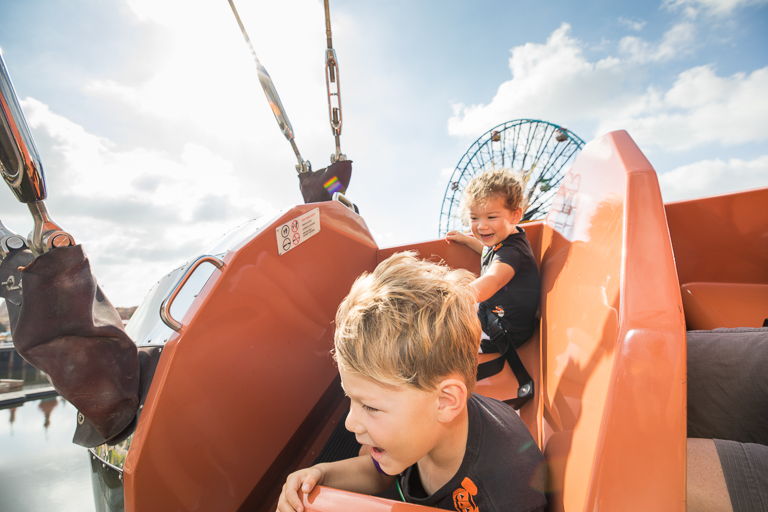 Ariel was next. Love this picture of the two of them. 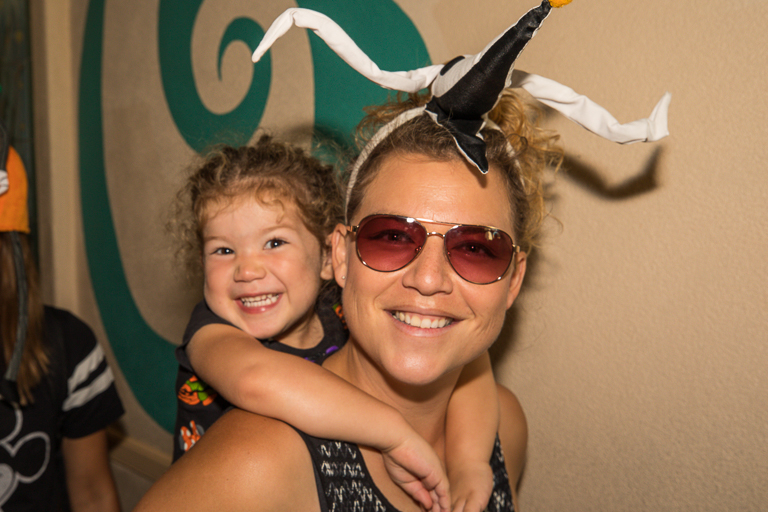 For now, all four of us can squeeze into one clamshell. 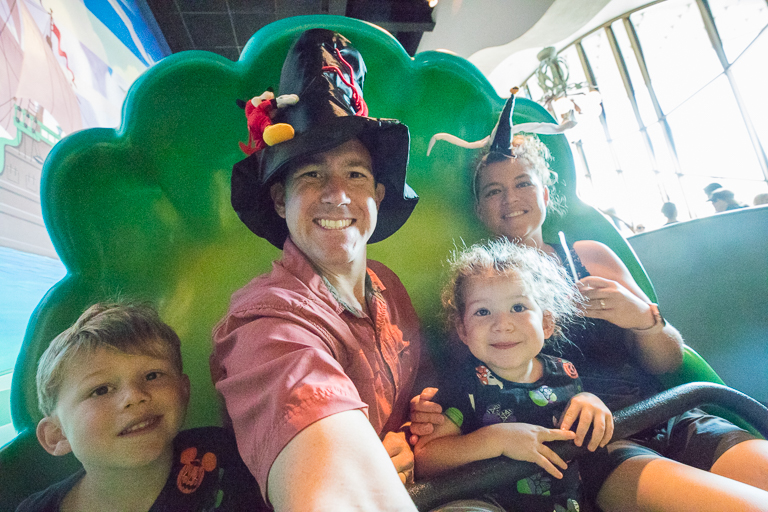 10:45am finally rolled around and it was time to use our Toy Story fastpasses. How many in our party Alli (that need seats)? 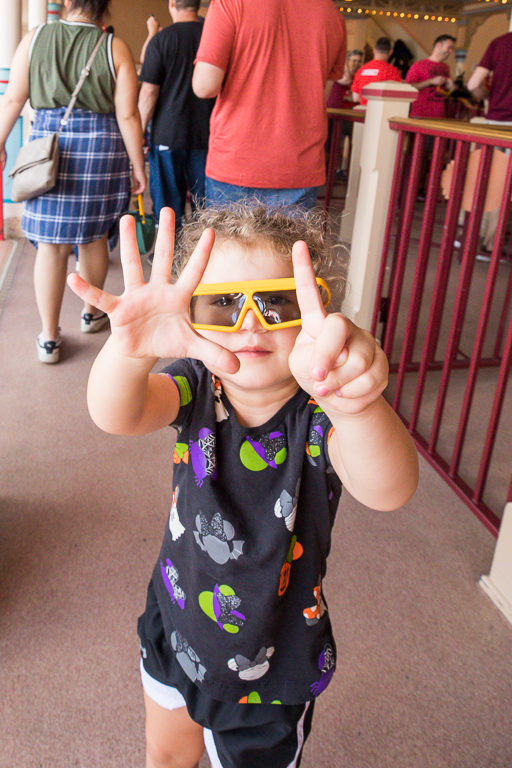 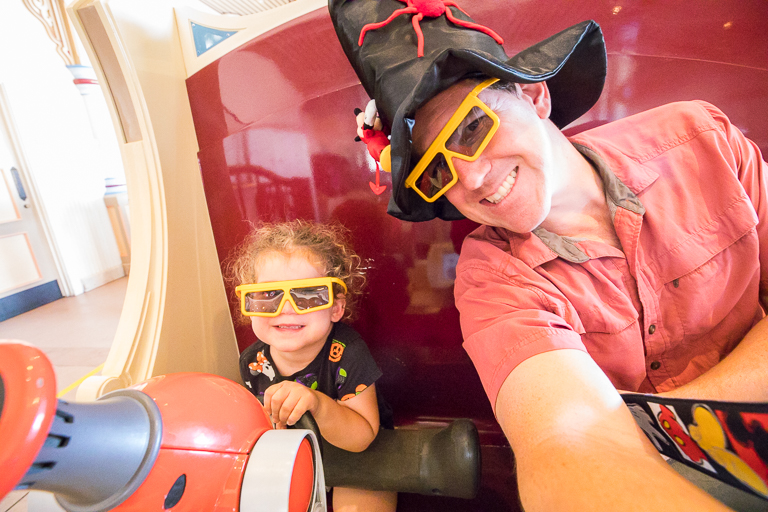 It wasn't in the 300k range, but my score was still good enough to be the best of the hour. I really am curious how to take it to the next level and start reaching the 400k-500k range. 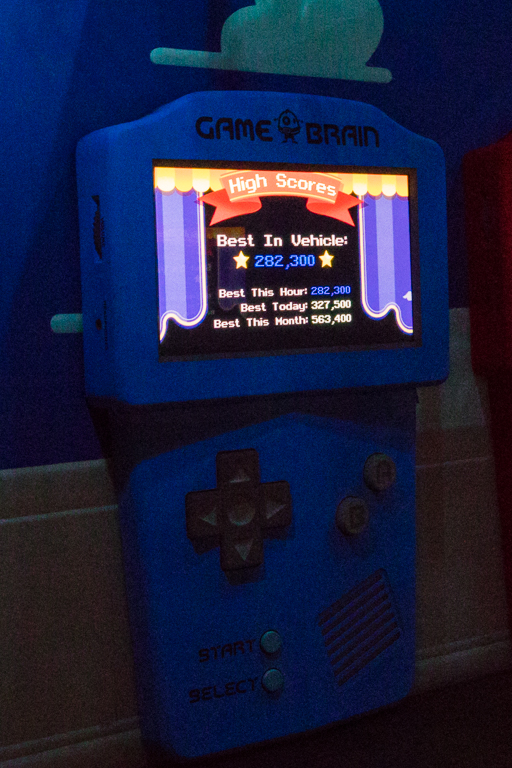 For lunch, we introduced our neighbors to the deliciousness that is the Bacon-Cheddar-Ale soup bowl. They thought it was great. 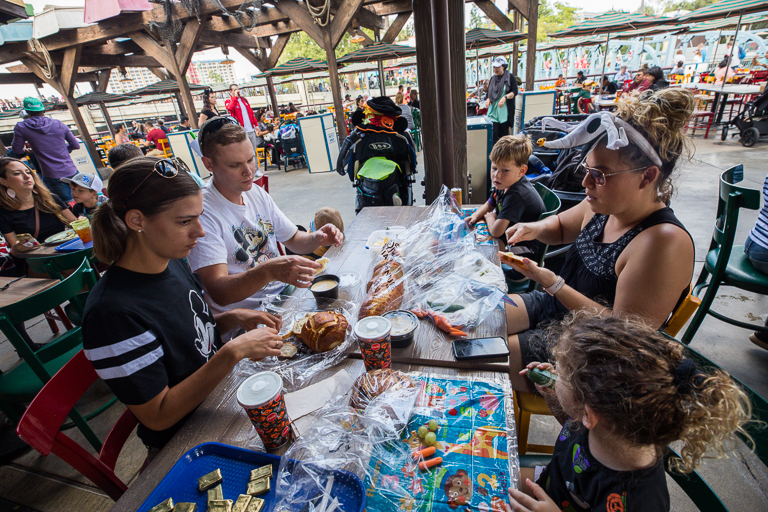 And Ian and Alli showed them what to do with all their crusts. 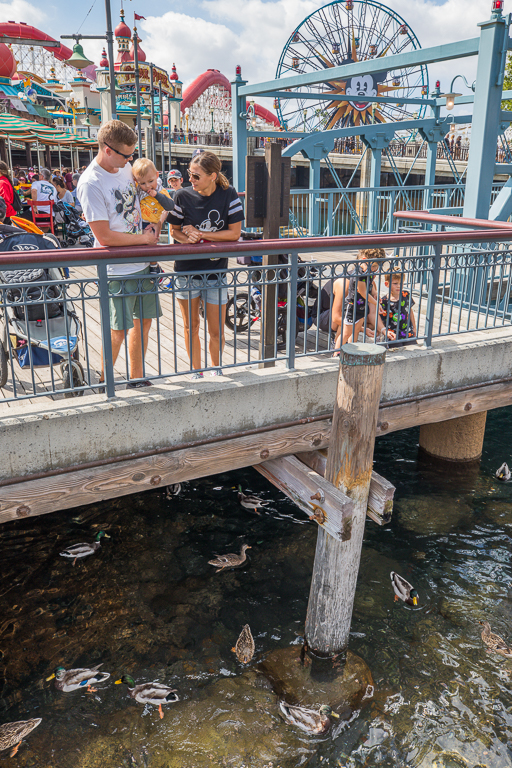 Everyone getting into it. 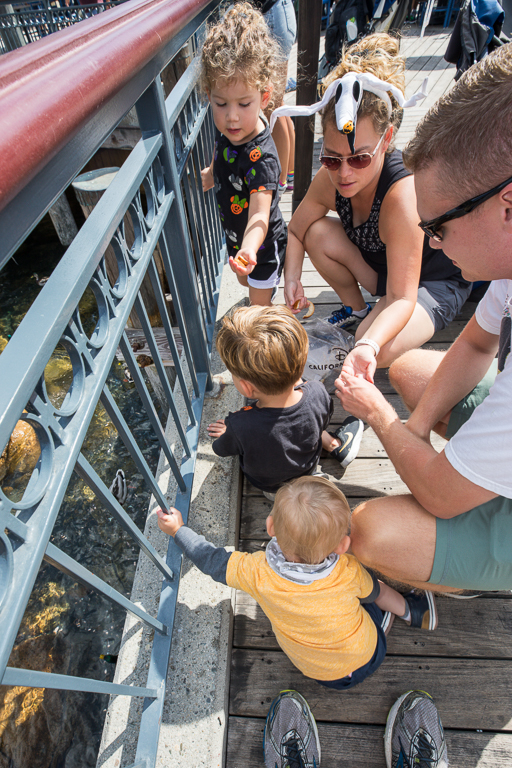 By this point it was almost noon and the crowds were really picking up. It's Pride weekend at the parks, so it's much busier than normal. At this point, Toy Story was posting a 120 minute wait. Guardians was 130. Even Mater had a 25 minute queue. Hardly believing it I had to see it for myself, and once I got there I saw the queue stretching out into areas I've never seen the queue go before. Time to go to Disneyland!

And it's just as busy over here too. During lunch I acquired a fastpass for us to ride Big Thunder Mountain. 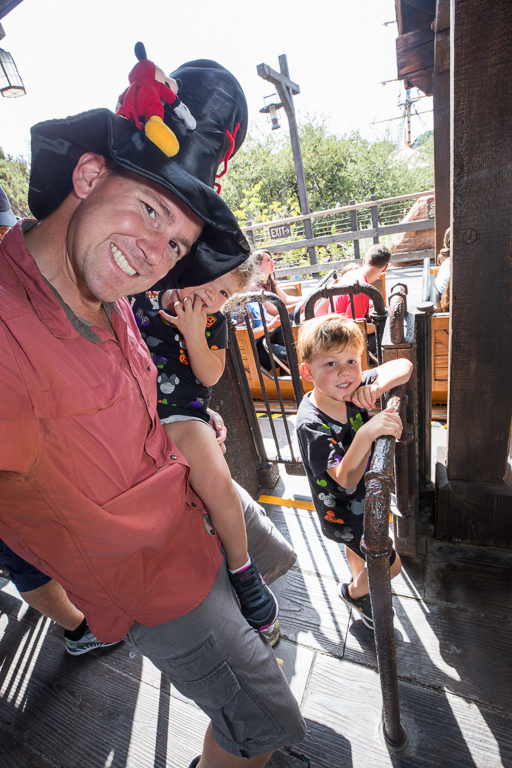 I was really proud of Alli going on it again. I know it can be a little loud and scary. Even though she didn't look like she was enjoying it, she still said she liked it when we were all done. 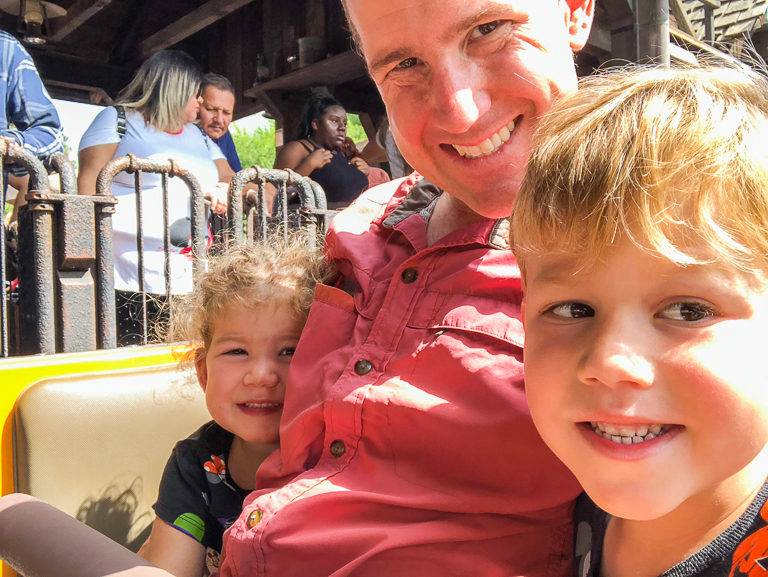 So, what do you do when the park is busy? Our go-to quick rides like the Carousel and Tea Cups had lines stretching out way past the entrance. The Tiki Room is still down for refurbishment too.

I do know of a pretty good place for the kids to run around and burn off some energy. And they'll like it just as much as any ride. The area around Goofy's house in Toon Town reminds me of the playgrounds in the mall with soft things to climb on and rubber floors. Theresa and I found a bench and let the kids run free. There's only one entrance/exit so we could relax a little bit too.
Both Ian and Alli loved jumping off this pumpkin. 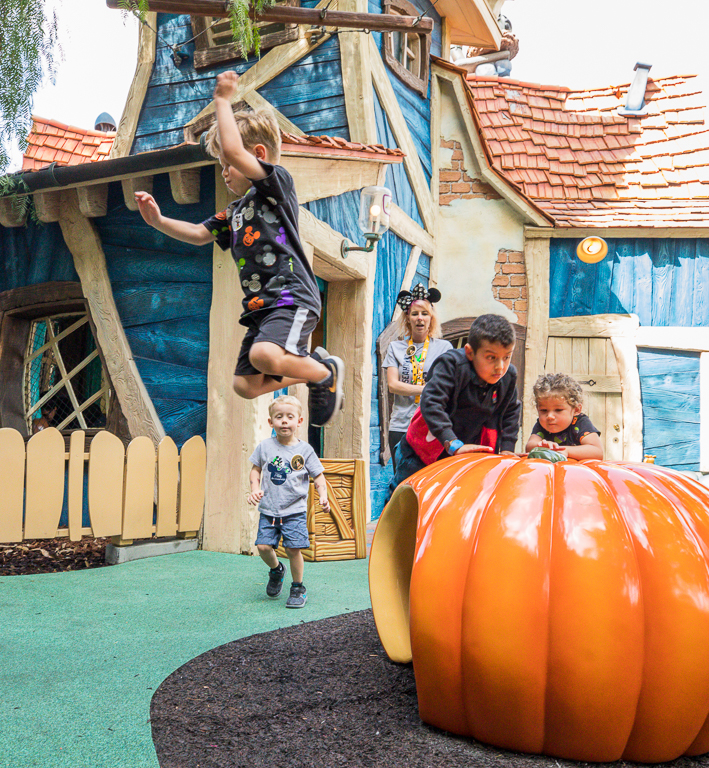 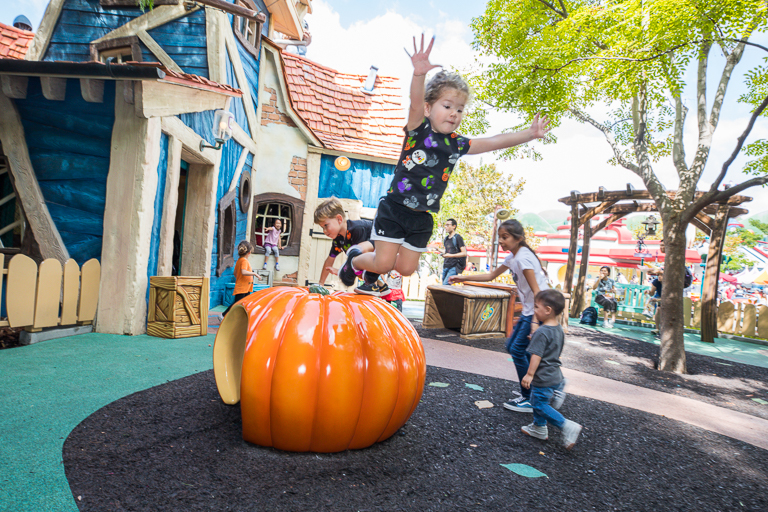 And the slide is popular too. 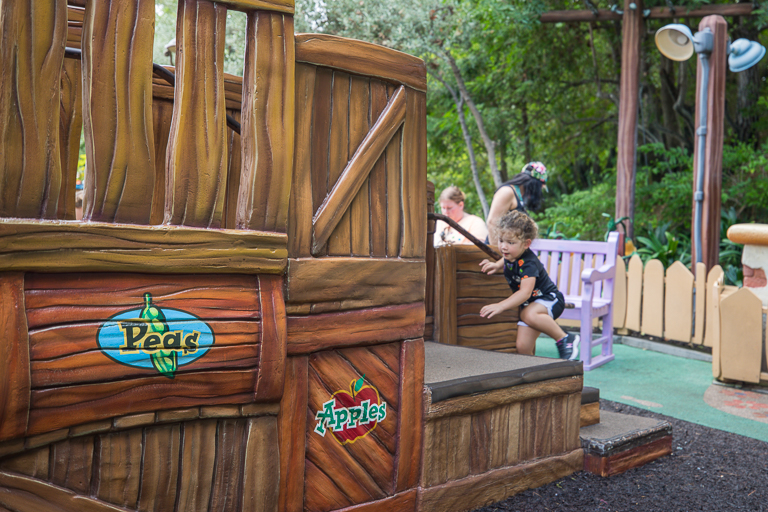 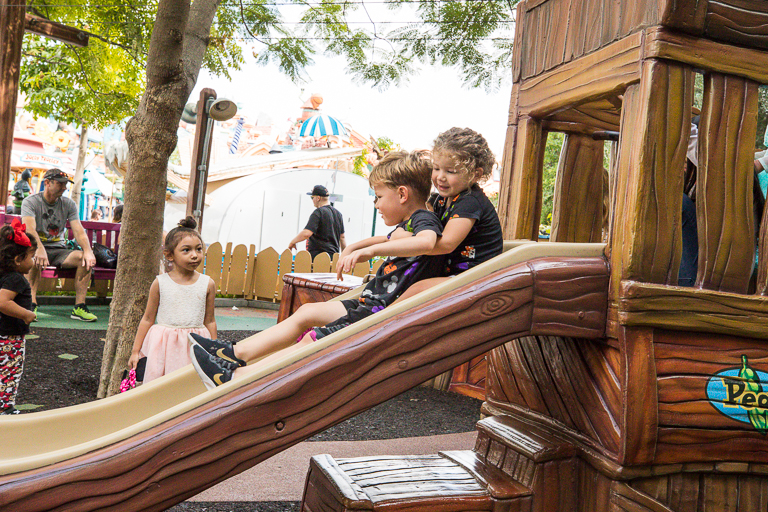 I bet they spent at least 5 minutes just hanging out inside the giant pumpkin. At one point there were 7 kids squeezed in here together. 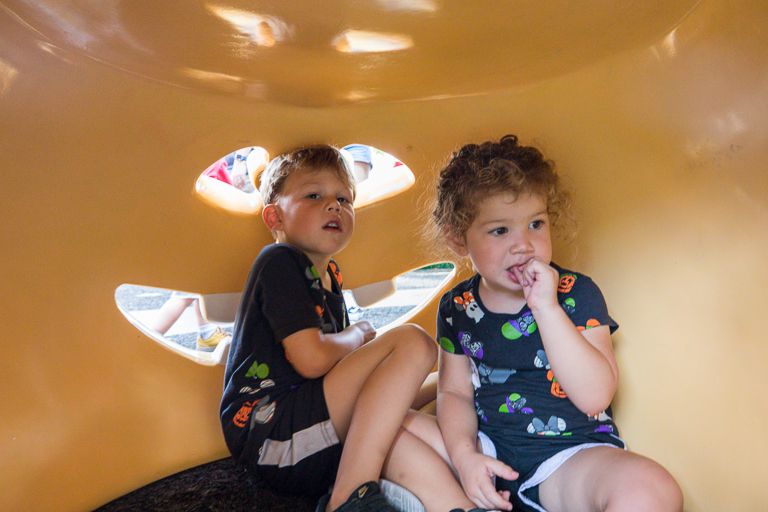 Our last ride of the day would turn out to be it's a small world. The fastpass line was backed up quite a bit. Still better than the 45 minute standby line I suppose. 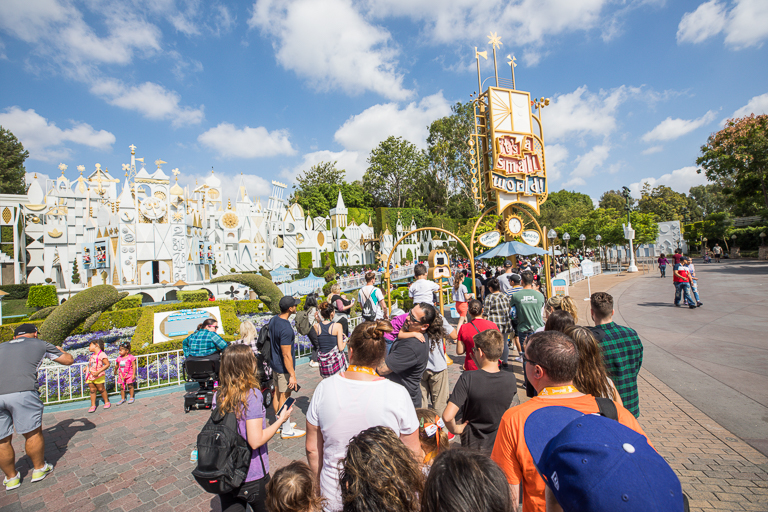 Somehow they always end up having a coin to throw into the water. 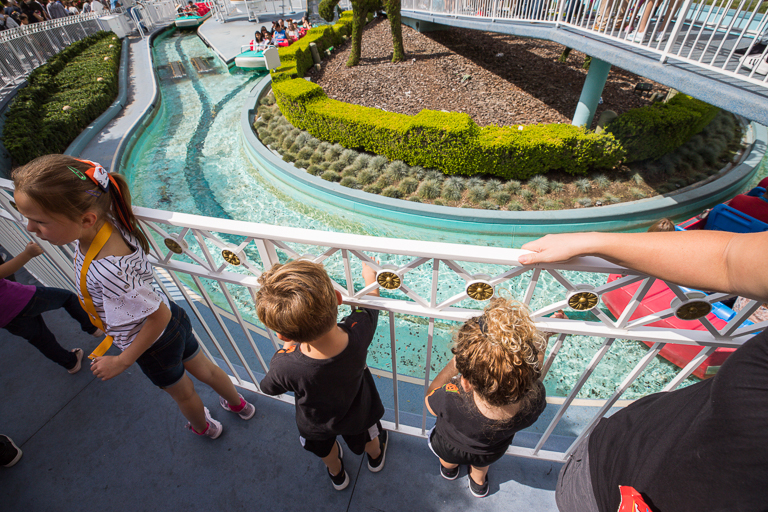 It's a small world indeed.
Funny that I used to think this song was annoying. Then it became one of our go-to songs to sing to the kids when they were little, and so its become a favorite. 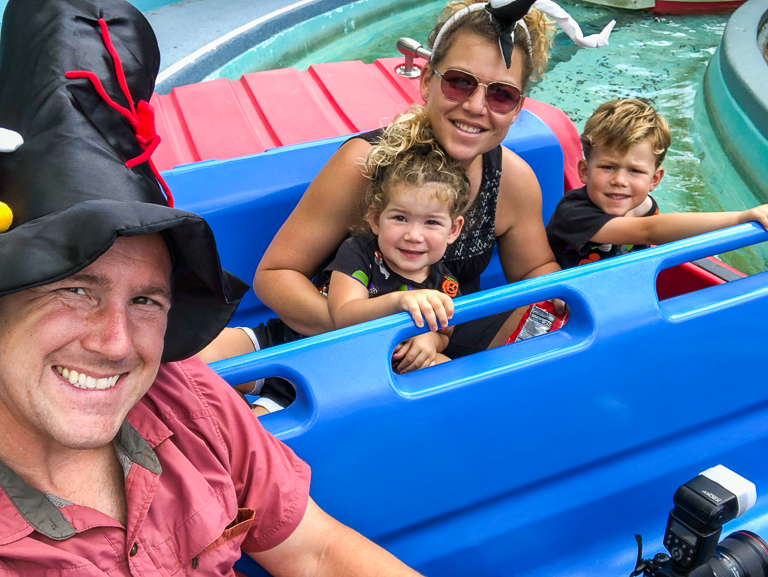 Even though we're leaving, we're not quite done yet. Ah, so the World of Disney has re-opened. I wasn't a huge fan of the changes they made on the other side. Poking my head in on this side, I see it's more of the same. It reminds me of a retail mall space. Let's hope they add more Disney touches to it before it's finished completely. 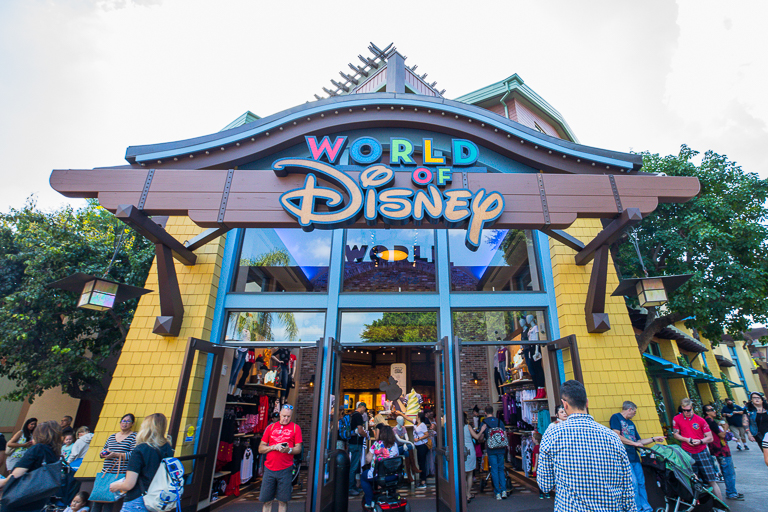 Cutting over to the Grand Californian, we were determined to improve upon the number of Hidden Mickeys we found in their pumpkin cake display. Supposedly there were 13 Hidden Mickeys around here, but on previous visits we could only find 6-7. Did we find them all this time? You can read all about it here.

The gazebo near the Disneyland Hotel has started to be a regular stop for us. While T and I relaxed, the kids wanted to run around the open field. After sending them on various "missions" eventually I let them run to a far-away tree (where I could still see them).

After sending them off running 4-5 times, Ian wanted to race me! Please Daddy, please. I've got to enjoy these moments too. Excuse the shaky-cam while I capture it on video.

A fun time at the parks today, despite the crowds. There's always something to do. Like taking the time to stop and smell the roses (or whatever the flower happens to be). 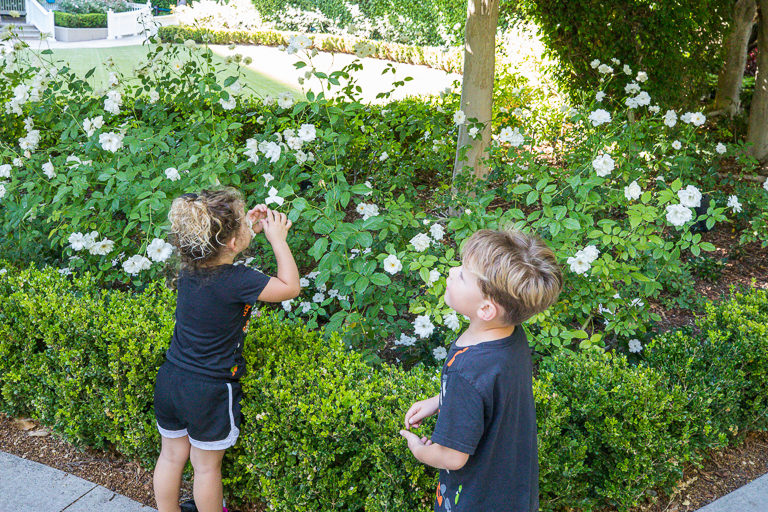