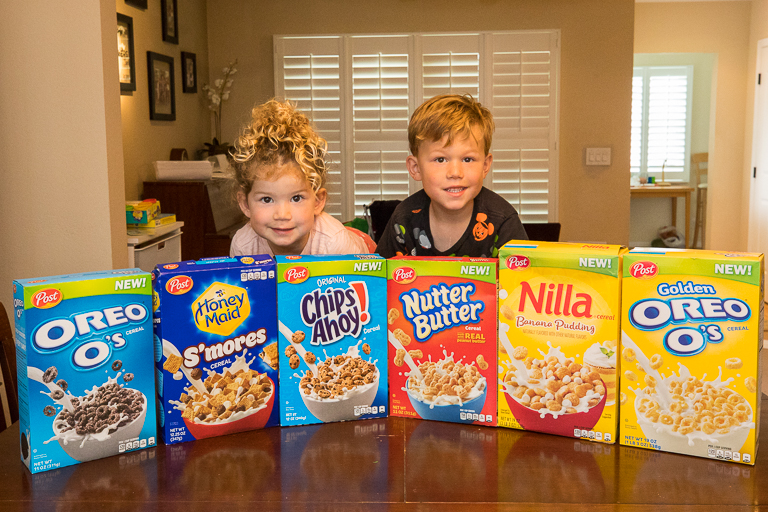 Starting from left to right, for no reason other than to be consistent with the picture on the back of the box.
It's Oreo O's! How can you go wrong when you mix America's Favorite Cookie with cereal? 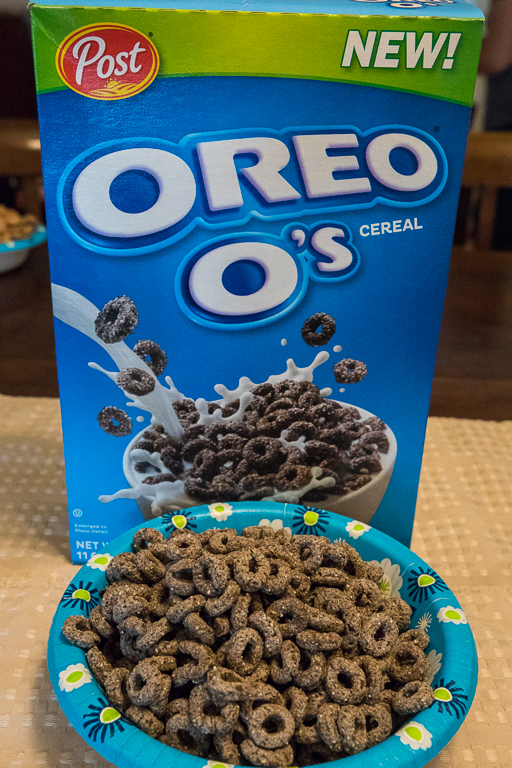 Originally produced between the 1990s and ending in 2007, Oreo O's are finally back to the cereal aisle! 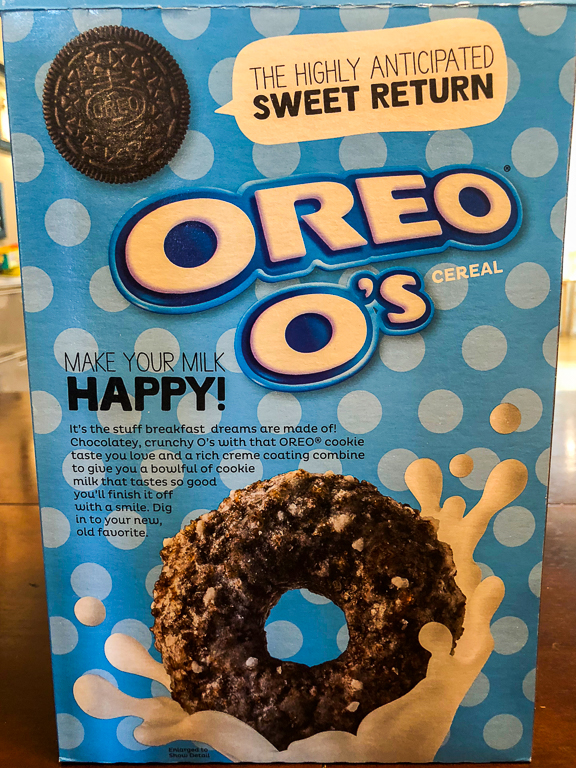 They definitely have the chocolate cookie taste down. The creme taste usually gets overpowered by the cookie anyway. This was a good start to the taste test. 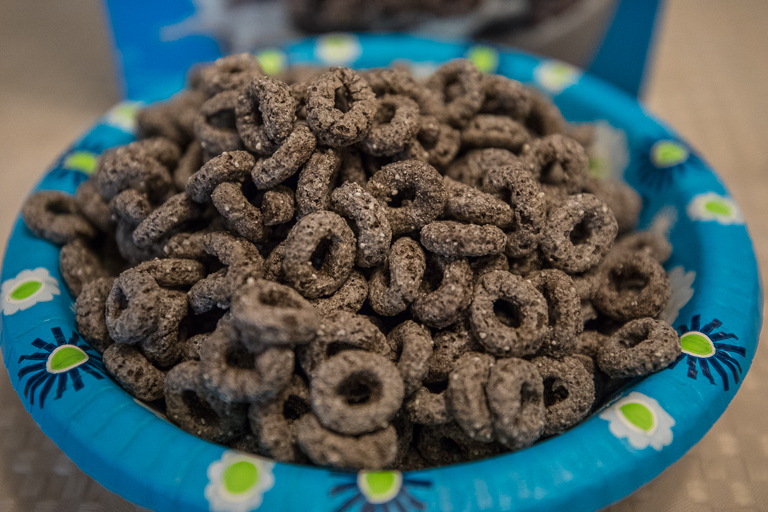 Who doesn't love S'mores? And any time you make them, you know you're reaching for the Honey Maid graham crackers. 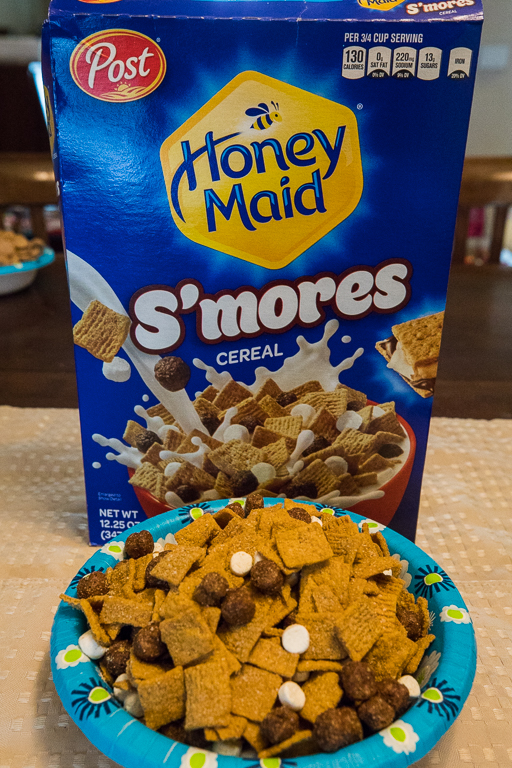 S'mores are so delicious. The bowl was full of graham cracker like squares, chocolate puffs, and marshmallows. The graham crackers pieces were as close as you can get to Golden Grahams. The chocolate flavor was very very subtle. But the marshmallow pieces were bigger than I'd normally expect and didn't have the super crunchy freeze-dried texture. This one was Theresa's favorite. 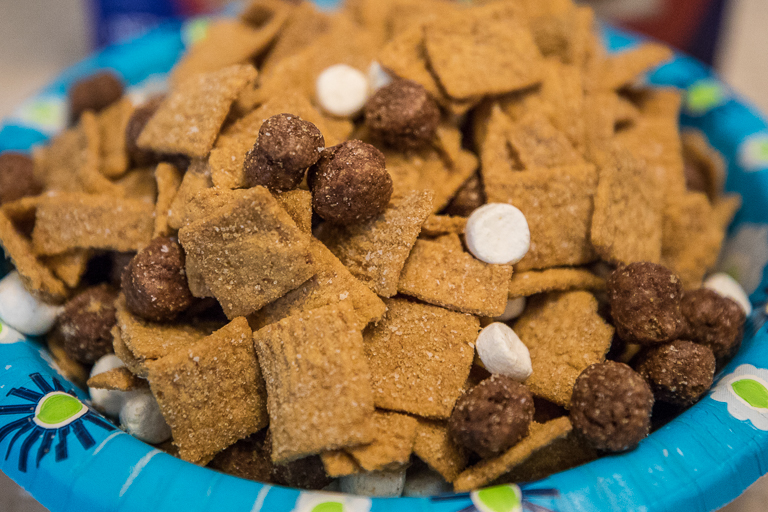 If you don't make one of these, can you really say you ate a s'mores? Next were Chips Ahoy! The back of the box claims "a cereal celebration that puts the taste of America's favorite chocolate chip cookie right into your breakfast bowl." In short, no it doesn't. 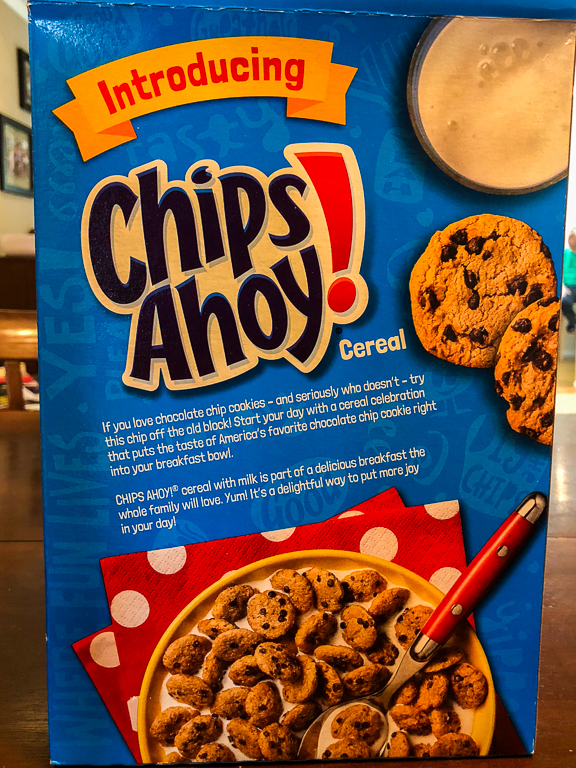 The first thing I really tasted when I tried these was the corn based puff. There was also another flavor I couldn't quite place. It wasn't chocolatey, and those chips on the cookie were only there for decoration. They didn't provide any flavor. 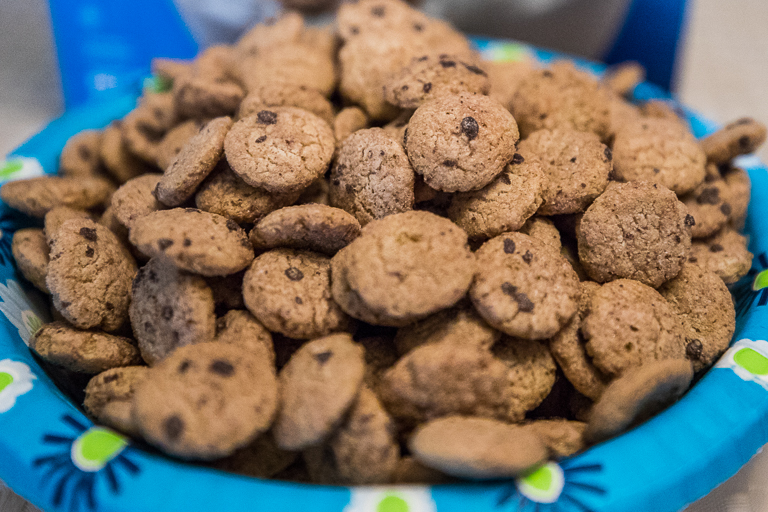 If there's any cereal I was looking forward to trying, it was the Nutter Butter. Who doesn't love peanut butter? 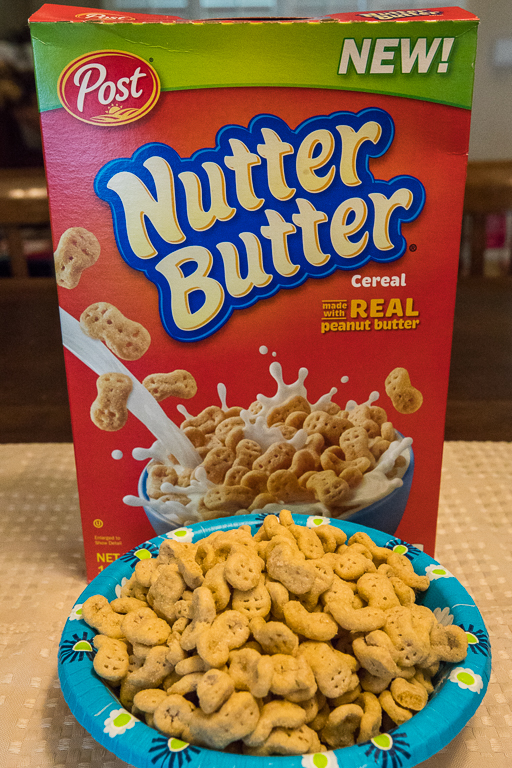 For the previous cereals, I showed you the back of the box first, then the bowl of cereal. For this one, I'm changing it up because I dove right into it without reading the box first.
I was first surprised by the texture of these peanut shaped pieces. It was expecting hard and crunchy, but they were a lot closer to soft cookie texture than they were to crunchy cereal texture. And they seemed to all be covered in a dusting of something. I wasn't sure if that was due broken pieces during transport or what, but this is delicious. 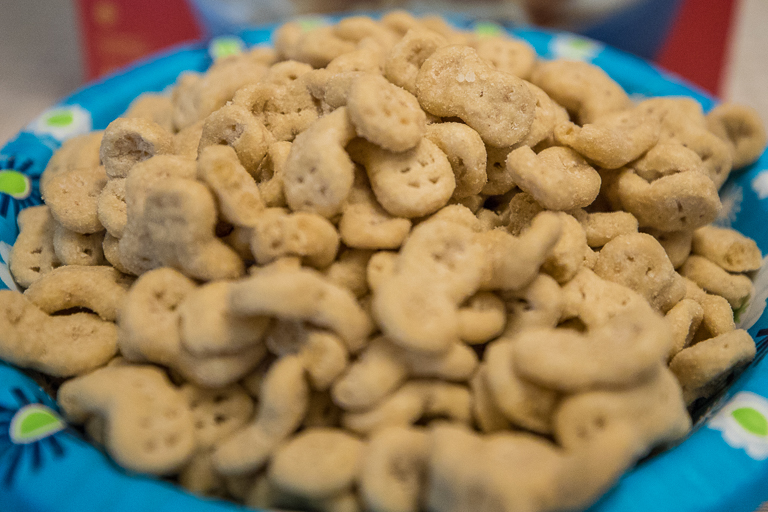 Ah, reading the back of the box that dusting is intentional. "A creamy coating with REAL peanut butter tops them off." Mmm. So good. 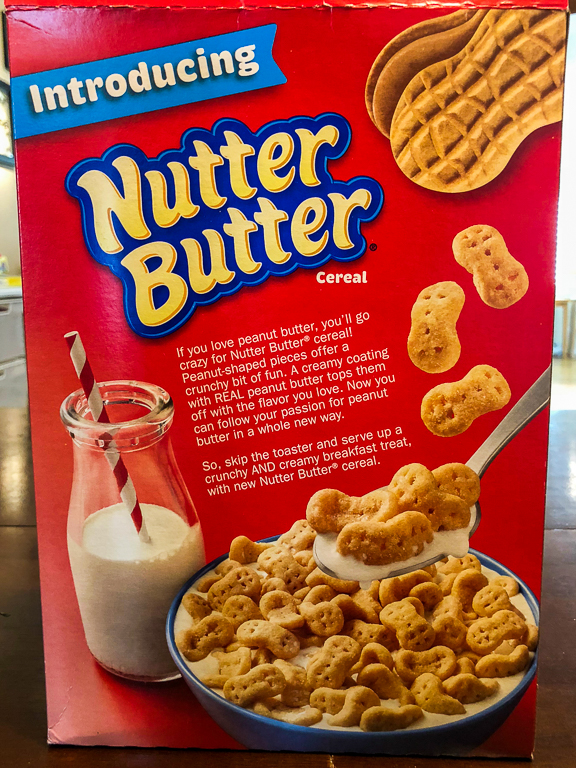 Next up were the Banana Pudding Nilla wafers cereal. I like bananas okay, unless they're overripe and mushy. I wasn't sure about this cereal before trying it. 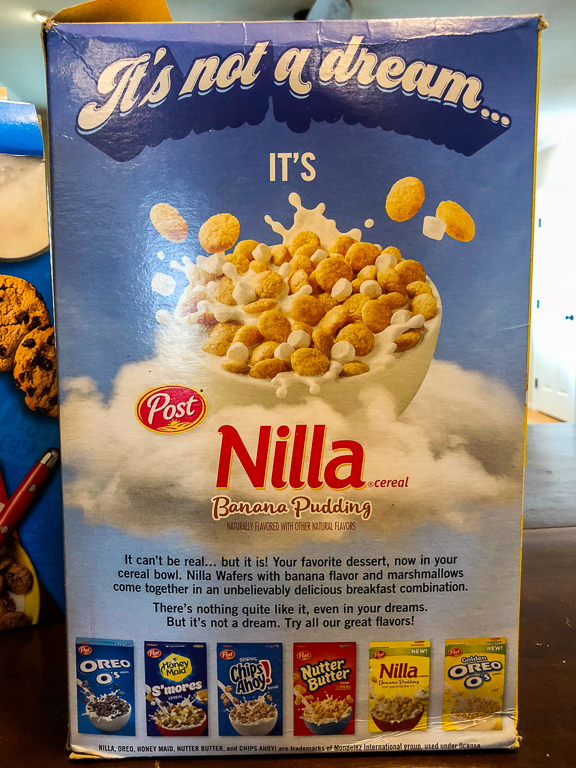 To my surprise, it actually wasn't too bad. Normally when you are thinking banana flavored something, you think about that completely artificial banana flavor. This cereal didn't taste like that. It really did taste like bananas, and again, I appreciated the larger marshmallows that didn't taste freeze-dried. 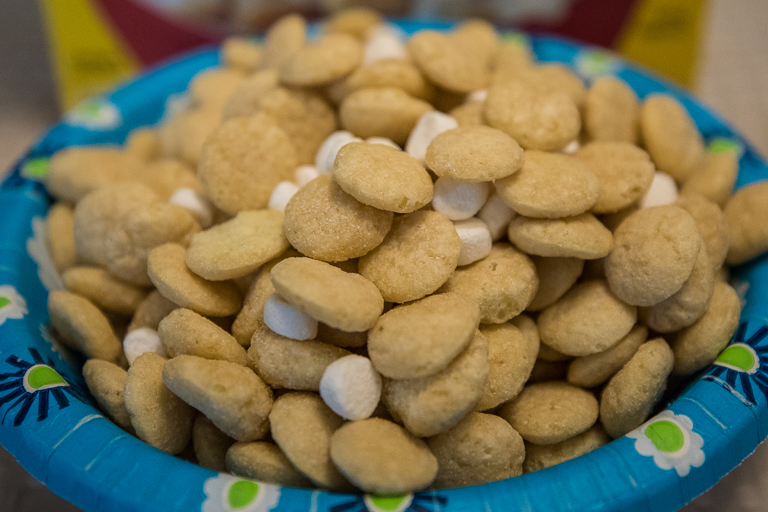 Last up are the Golden Oreo O's. While the chocolate cookies might America's favorite, my favorite is the golden Oreos. 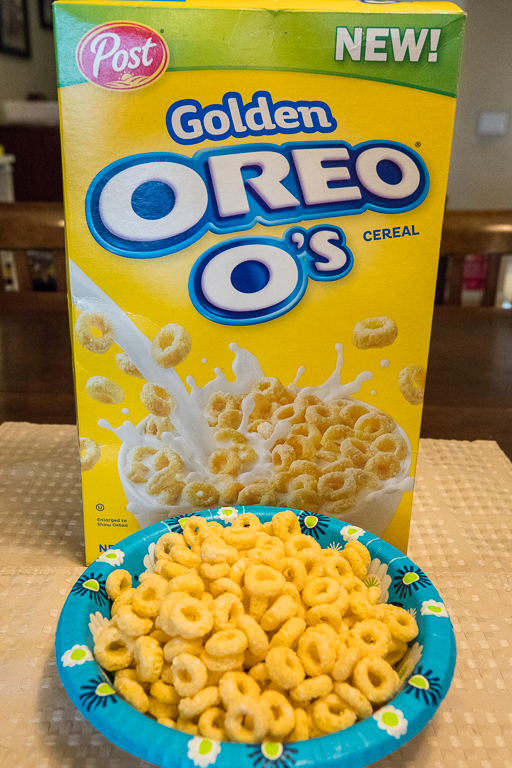 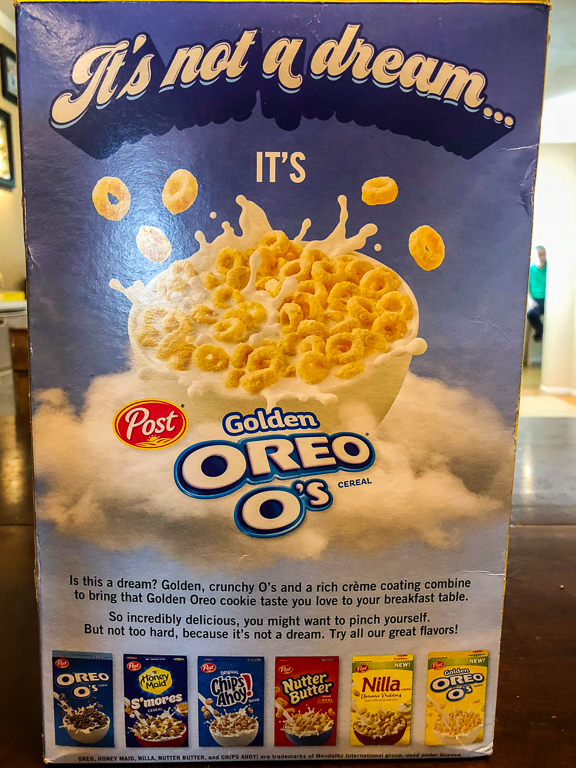 While the regular chocolate Oreo O's had the strong flavor of chocolate and none of the creme, these tasted just like the creme filling with maybe a hint of the vanilla cookie. That's a win in my book. 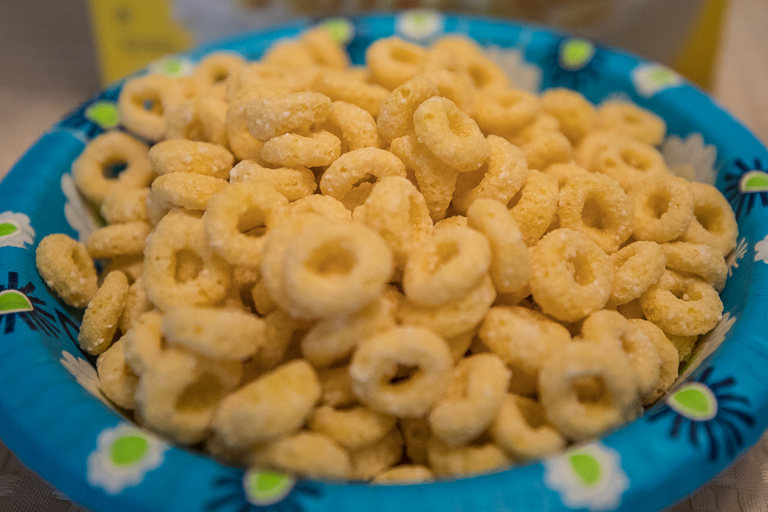 Everyone had a good time sampling all the different flavors. Because seriously, how often do you get to try 6 different kinds of cereal and they all taste like dessert? 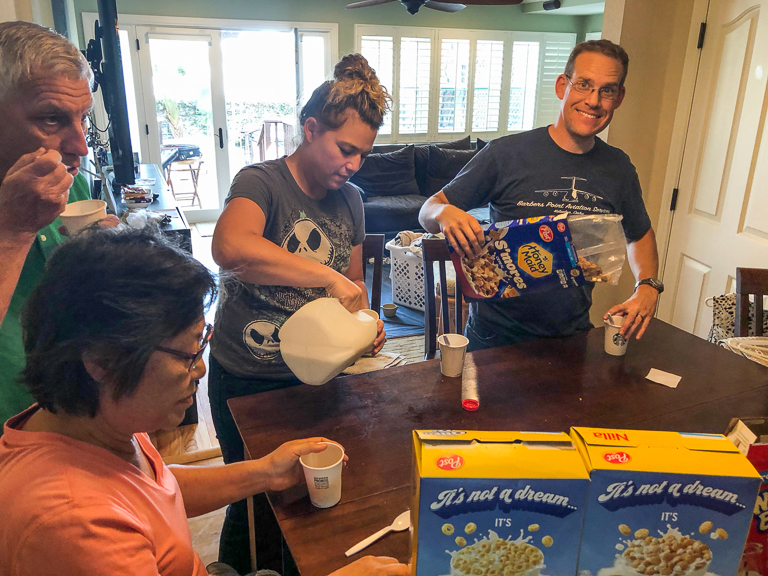 Time to vote for favorites.
Alli was very clear about her winner. After getting to the Nutter Butters I don't think she tried anything else. And you'd constantly see her reaching over to the bowl to grab a few more to munch on while the rest of us where trying different things.
For the rest of us, the Nutter Butters were the definite favorite, followed by the S'mores. 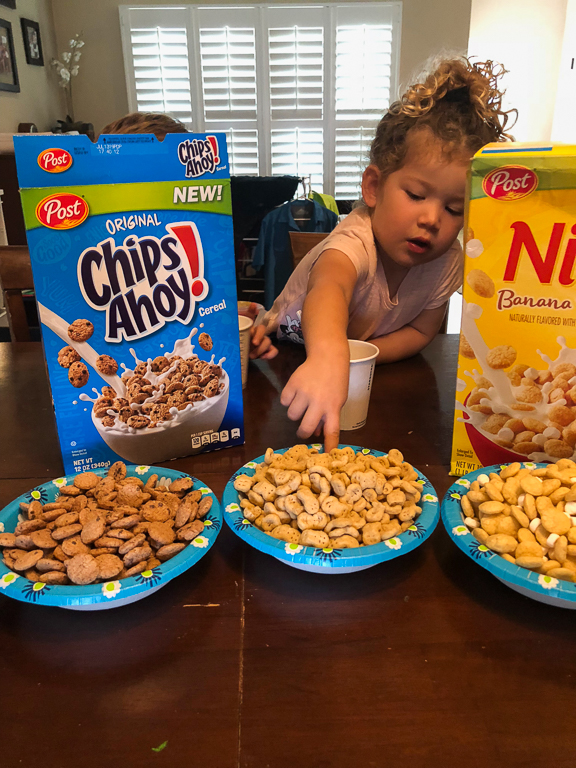