After dinner at Walt's, the four of us made our way to the castle for a group photo. 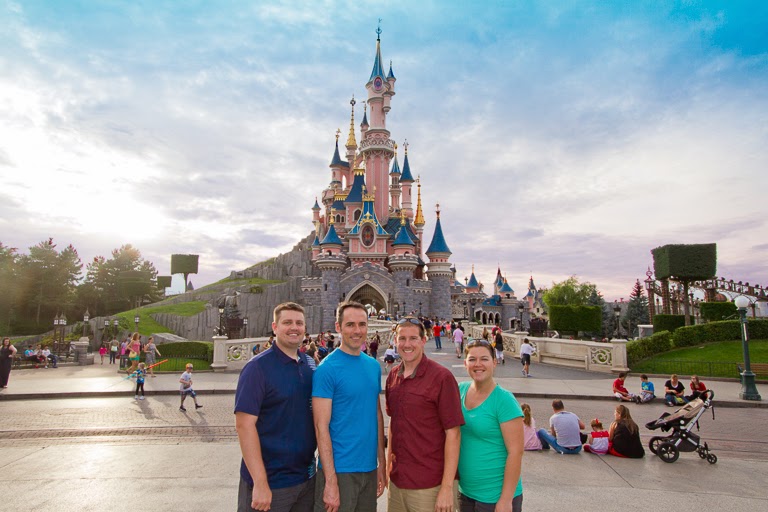 I’ve been watching the skies today and it just never had much blue. It was almost always overcast. We’ve still got to get a group photo though, so I set up the tripod and we take a couple, trying to time it when there is no one behind us. 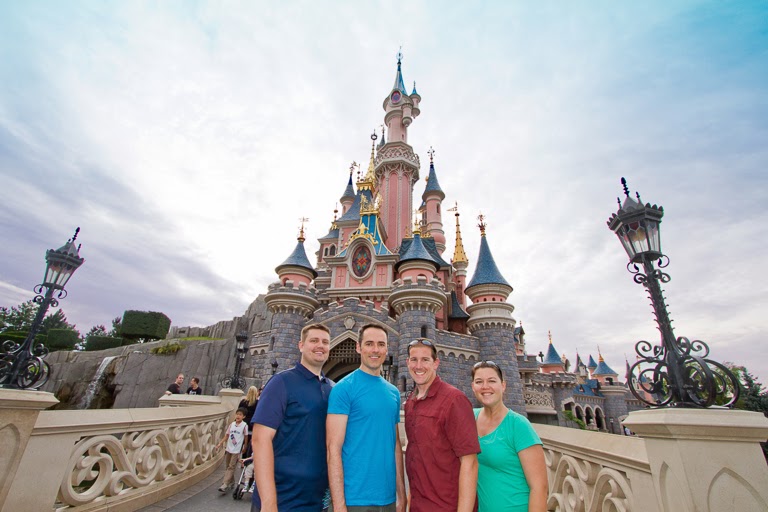 Jacob and T have had enough and head back to the hotel. Ruston and I decide to stay in the park longer, but for different reasons. He's going to go on a few more rides, while I really want to see the fireworks. I've got some time before I need to start staking out my spot though. 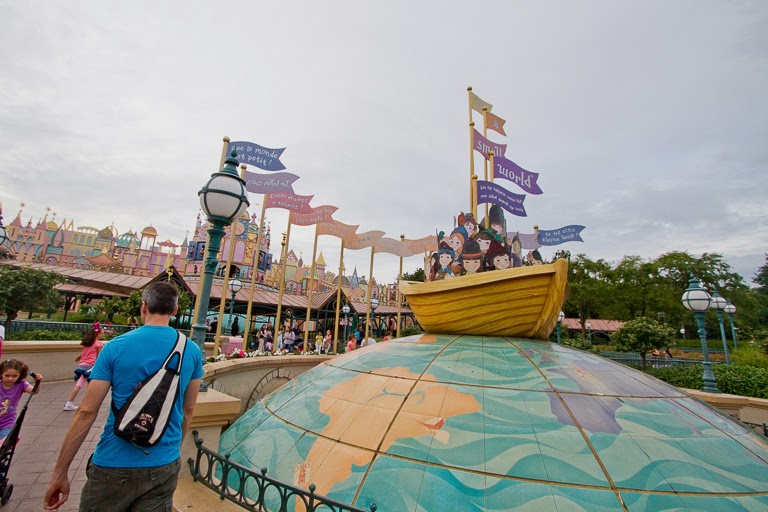 We go on it’s a small world together, and he points out how bad of shape the ride is in, with lots of lights out, nasty looking water, and general uncleanness. 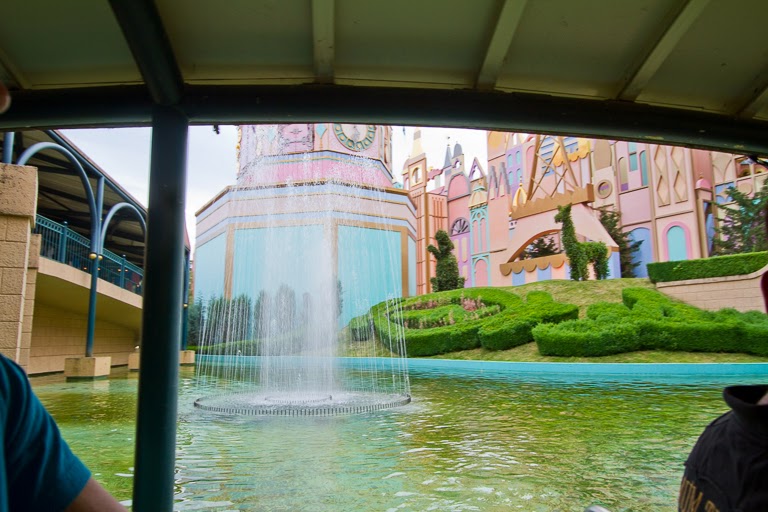 But they do have some fun scenes inside. 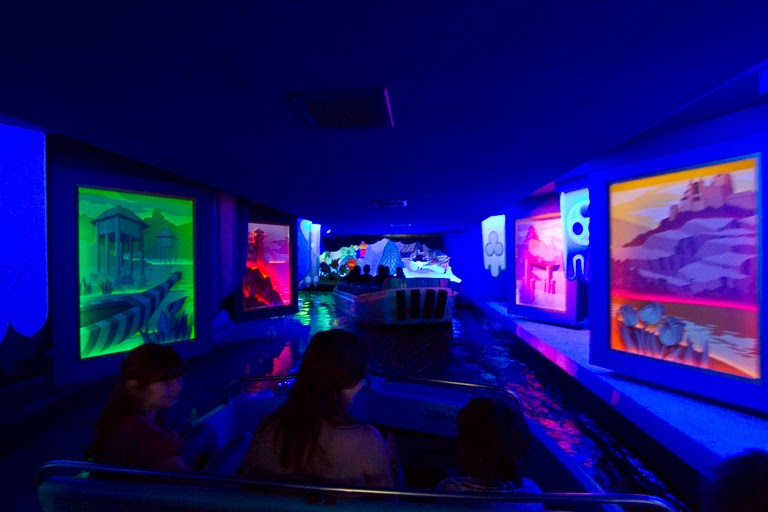 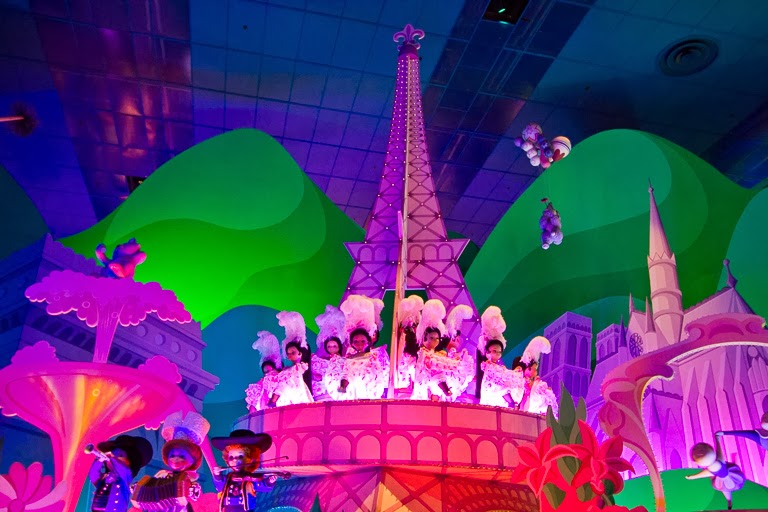 The tribute to Canada is huge compared to ours. Ruston thinks it's great! 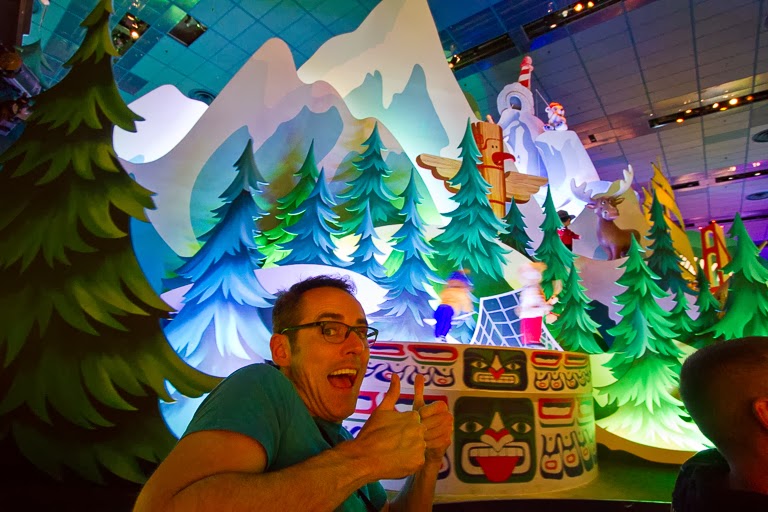 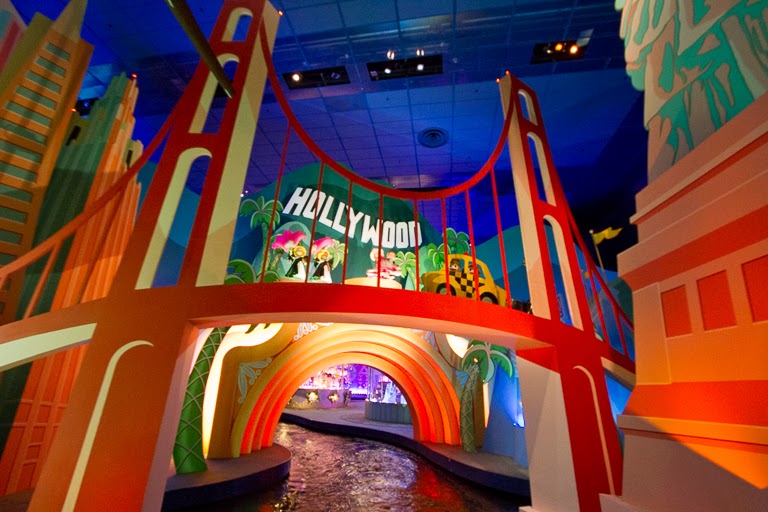 We walk together to the front of the castle, and I see people are starting to sit for the 11pm fireworks show. It’s 8:50 right now and I tell Ruston that I’m going to be hanging out until the show. I'm as close to the castle as you can get and I go ahead and extend my tripod, just to let people know my intentions early on, and they can decide if they want to sit behind me or not. 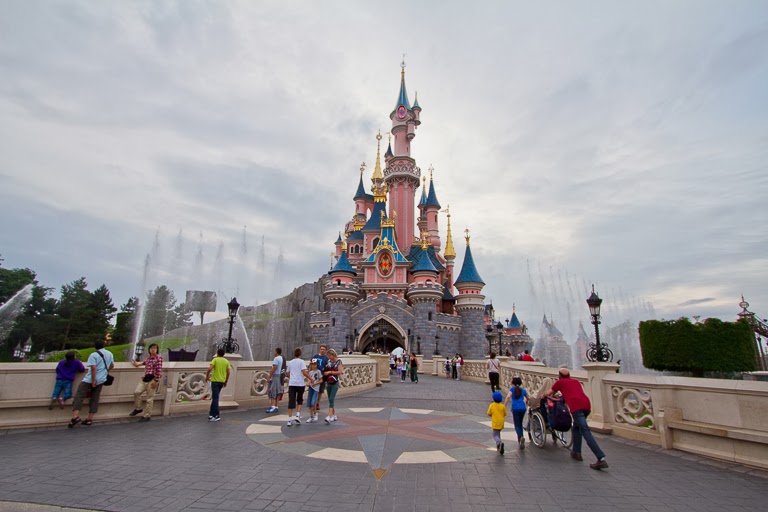 I ask if we’ll be allowed to stand during the show, and am told it’s whatever the crowd decides. In the 2 hours sitting there, I make friends with a couple people. One girl is from the south of France about 8 hours away by car, and is an intern at the Wild West restaurant in DTD. Another mother is traveling from Australia with her two daughters. She’s had a rough day and has lost both kids at least once. Yikes! 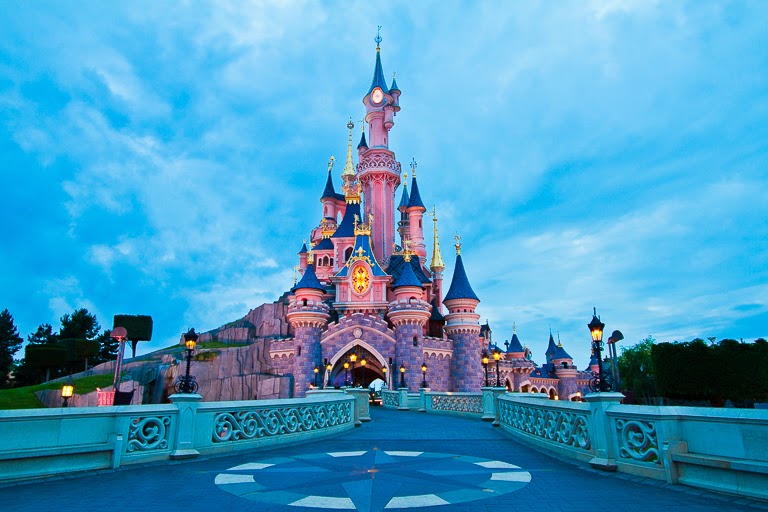 Before the show, the people behind me ask my intentions, whether I’ll be standing or sitting during the show. I told them I didn’t know and I’d have to see what everyone else does. Luckily for me, I have my shutter release cable and can fire off pictures while sitting on the ground. Just before the show, a group nearby stands up and gets yelled at by the crowd behind. I decide to stay seated, though I leave my tripod up, and no one seems to have a problem with that. 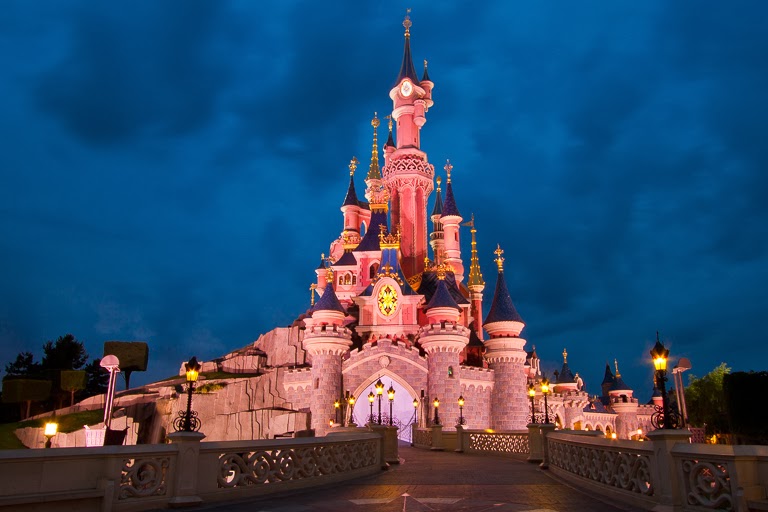 The show is great! Seated, you’re looking through the ropes, but it’s still alright. I fire off multiple pictures but can't really see what I'm shooting because I don't want to stand up. I’m hoping they turn out decent when I edit them later.

I think I got a few decent shots. 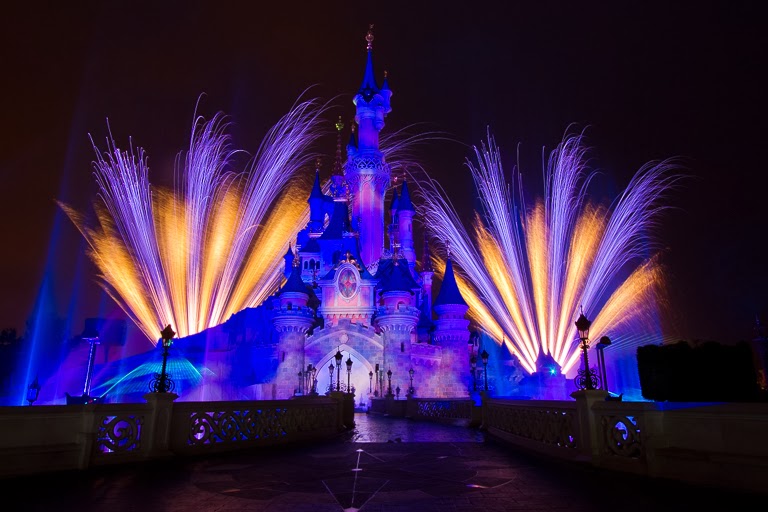 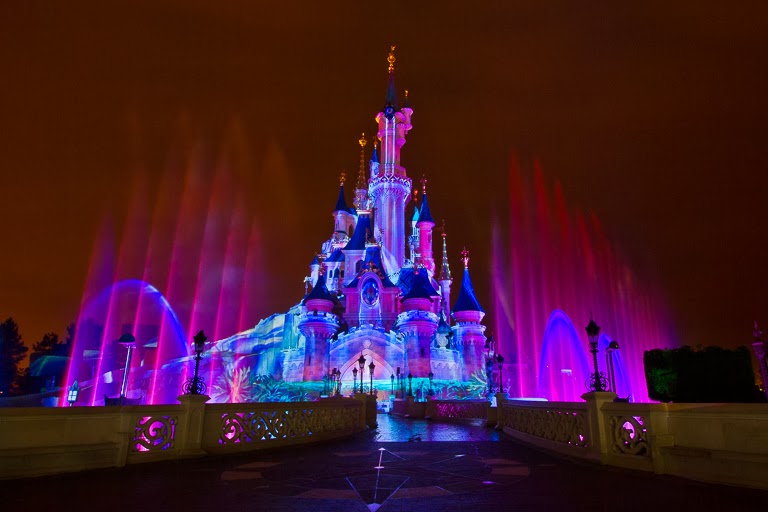 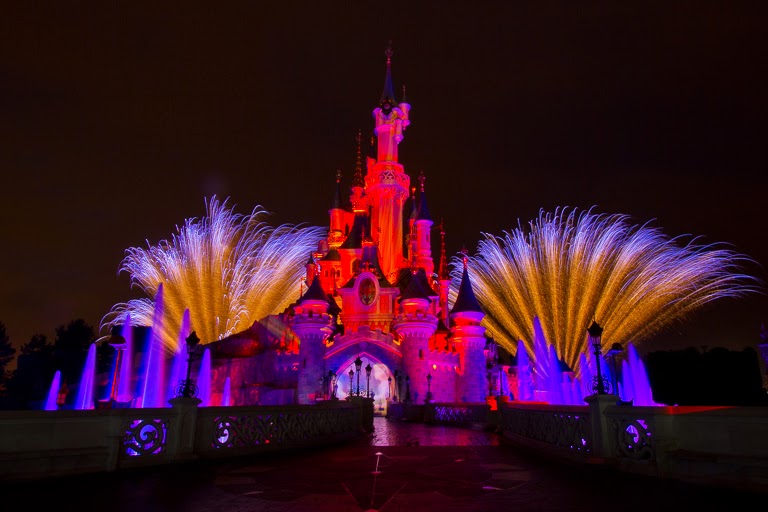 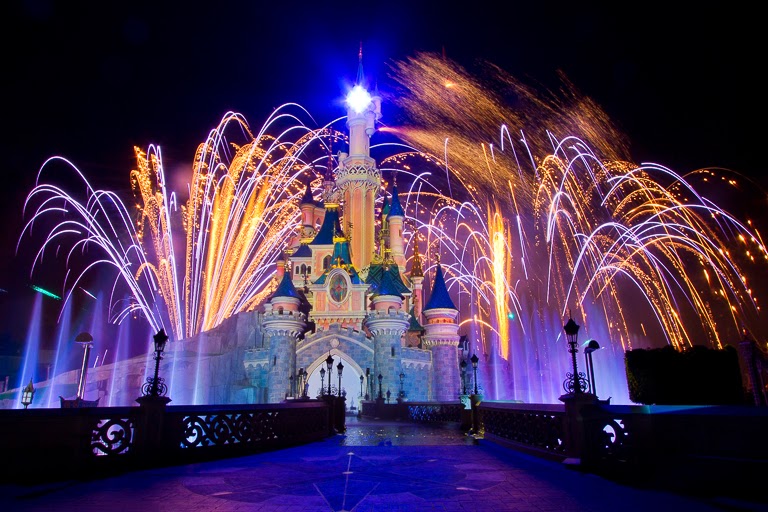 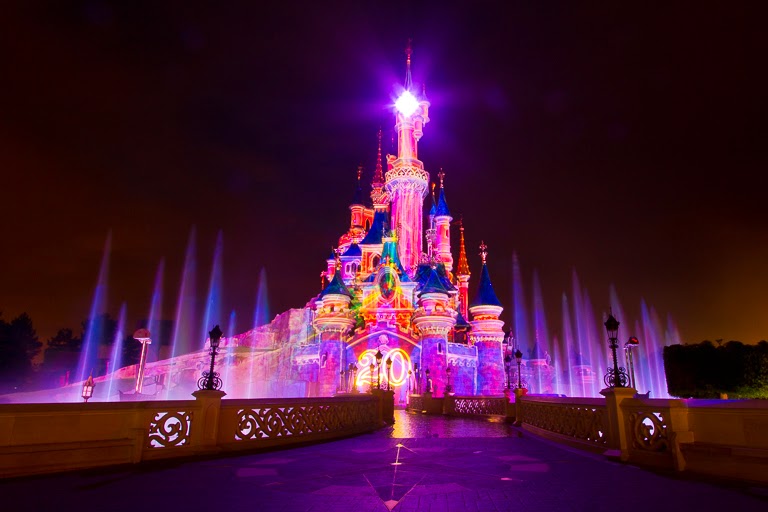 You can check out the full show here. Not my video but very well done.

Afterwards Ruston finds me in front of the castle. He's had a fun time on his own riding Snow White, Pinocchio, and Phantom Manor 3 more times. Told you it was one of his favorites! I look around to see if there are any more picture opportunities, but cast members are blocking entry into all the lands. 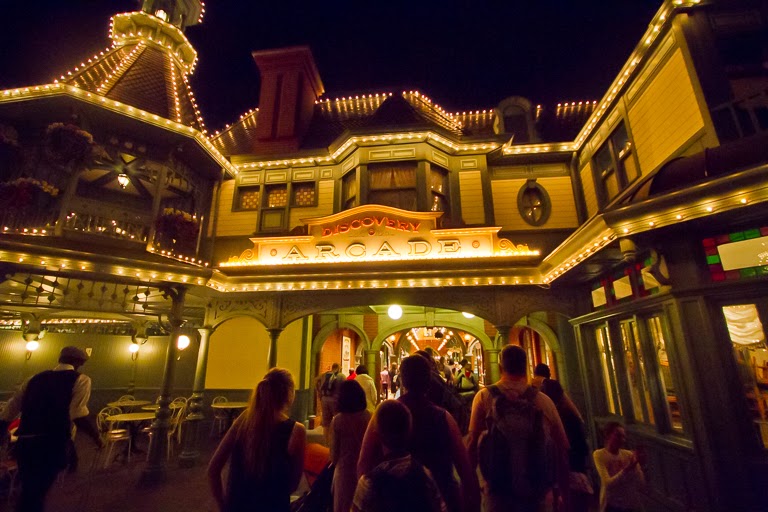 Ruston and I decide to take the Discoveryland Arcade back to the front of the park. Again, such a good idea. We need one of these back home. 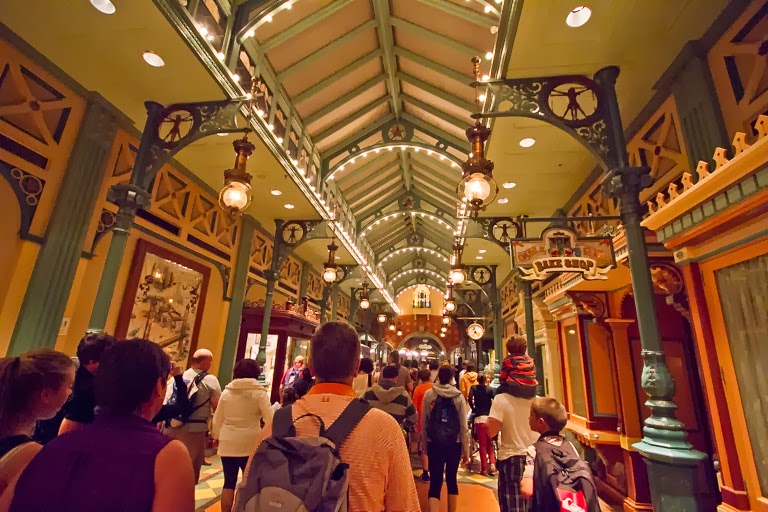 Just before we met up with Ruston and Jacob in Paris, they visited New York, so Ruston gets a photo in front of that sign. 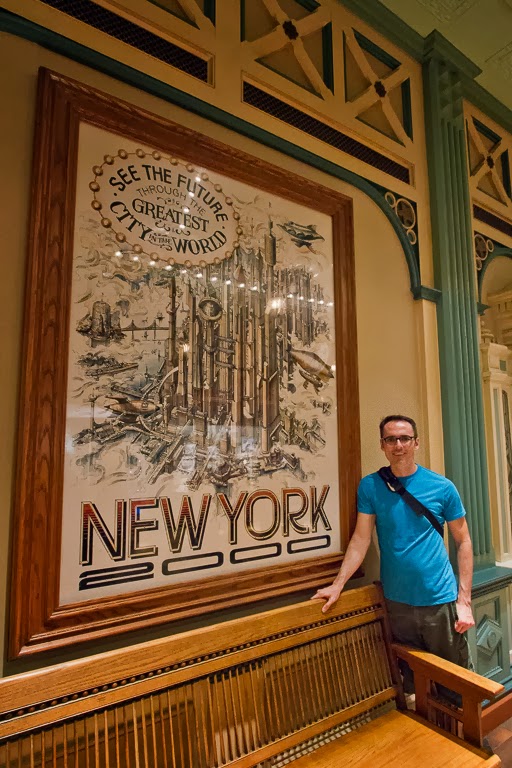 While I pose by our hometown, Los Angeles. 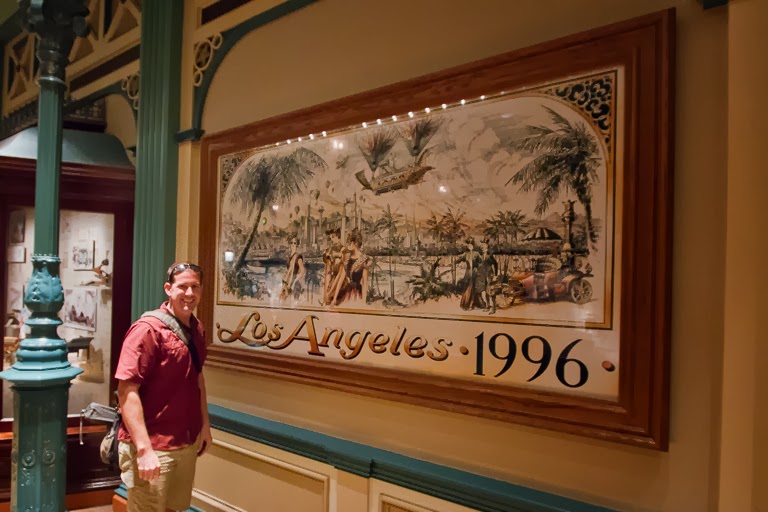 We make our way to the train station and find a train already at the platform. We run beside each car, but each is extremely full and we don’t find any openings. As we reach the last car, we see that it’s fairly empty and as the doors are beeping, we both jump in. We weren’t inside for more than 2 seconds before the doors close and we start moving. We couldn’t have timed it better if we tried. After getting back, we head up to the hotel room and call it a night. We've had a great time exploring Disneyland Paris together. Tomorrow we’re off to Paris. Until then!
Posted by Joe at 4:00 PM