This year our flavor choices include Cheddar Bacon Mac & Cheese, Cappuccino, Mango Salsa and Wasabi Ginger. Not only are we getting new flavors, but there's new textures as well. The Mango Salsa chips are being offered as Wavy Lay's and the Wasabi Ginger are a thicker and crunchier Kettle Cooked chip. Let's dig in and find a favorite! 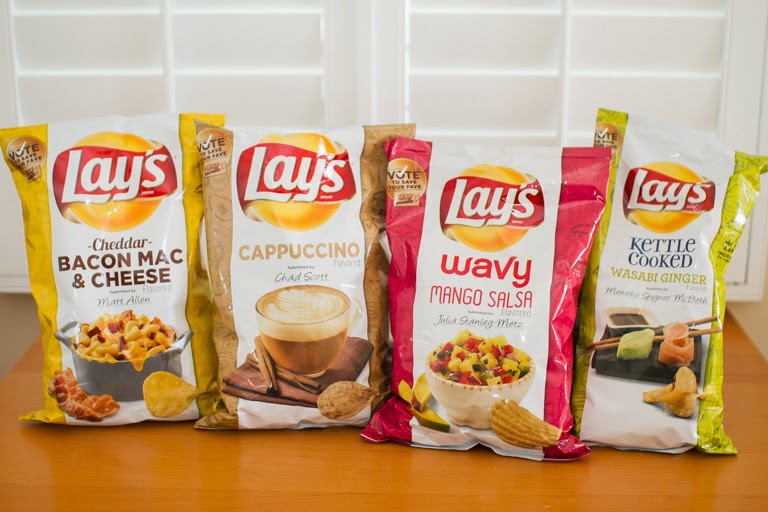 Let's treat this like a meal and go in that order. We'll start with a Mango Salsa appetizer. 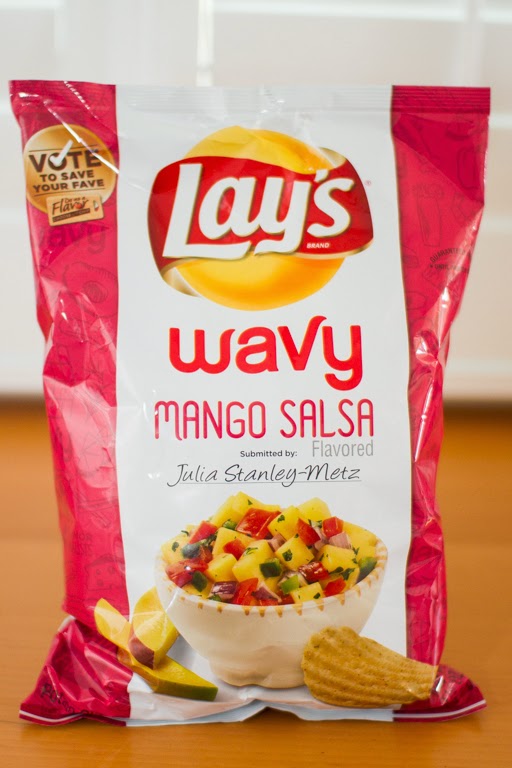 
My husband makes the most amazing mango salsa that I can eat for days and put on everything! 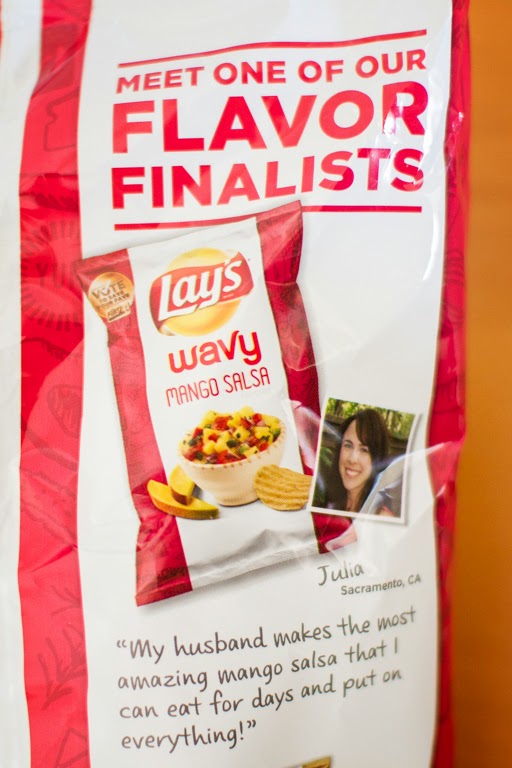 Time to taste! The waviness of the chips allows for lots of surface area for extra flavor. Unfortunately that flavor is not very good. In theory it sounds like it could be good; a little spicy and a little sweet. What we've been given though is something that has such a weird chemical sweetness, you don't want to continue. I've had multiple people sample this flavor and no one has said they liked it. Bleh, let's hope the rest of the flavors are better. 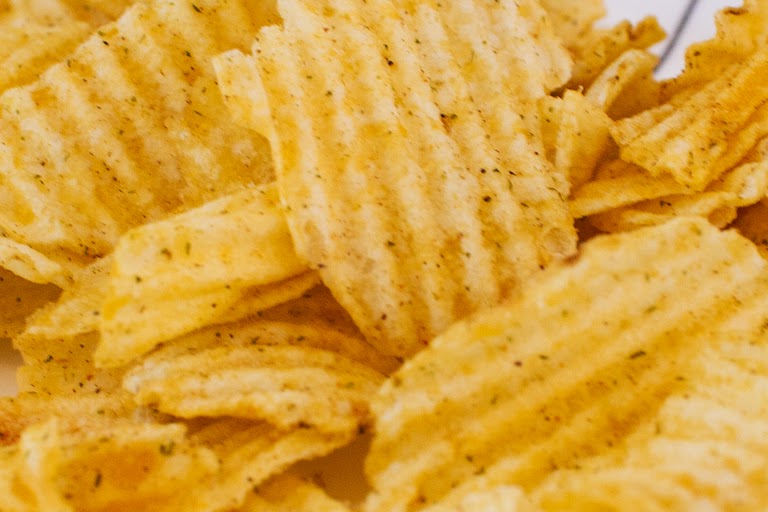 Next we'll have a Wasabi Ginger starter. 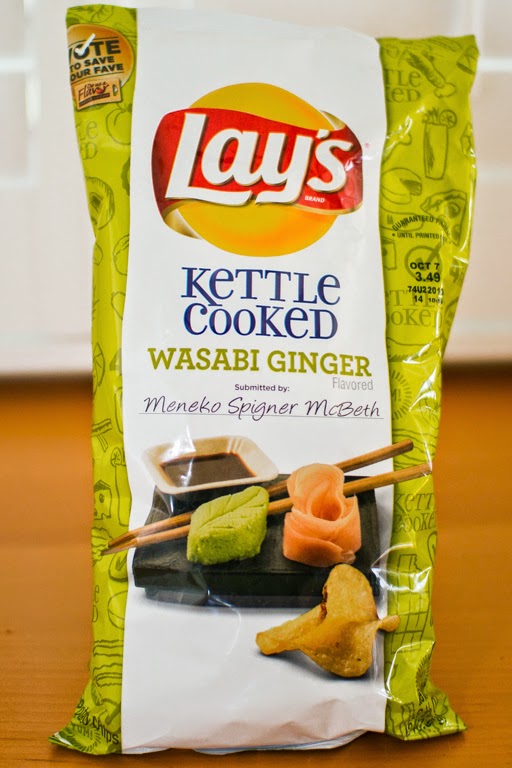 
My grandmother is Japanese and I have always loved when she would make sushi. My favorite part was mixing wasabi with soy sauce and dipping. 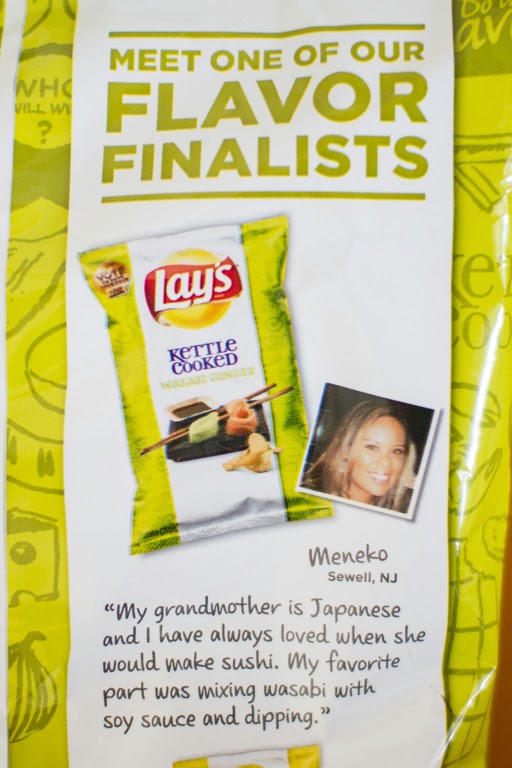 These were a surprise. They're a wasabi-ginger chip and as soon as you put it in your mouth you get that punch of wasabi flavor. It's a spicy and sharp flavor that soon gives way to a more mild ginger flavor. I like the choice of the kettle cooked chip too because it's extra crunchy and that just really goes well here. Of the people I've let sample it, it's been one of the favorites. 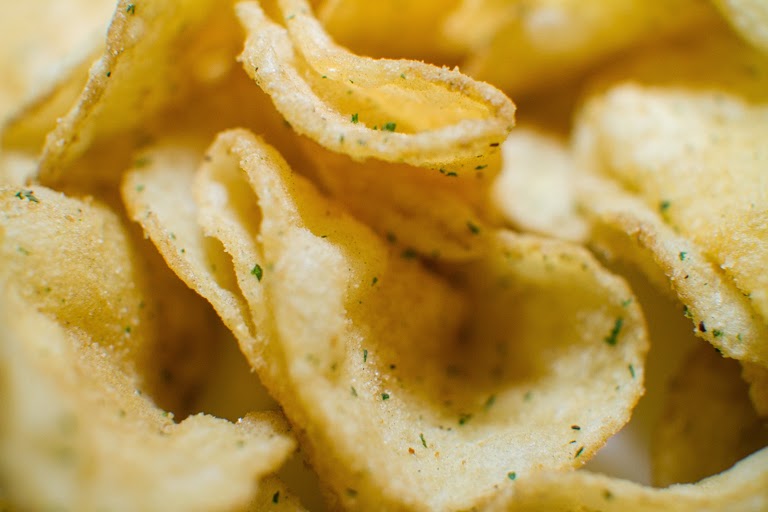 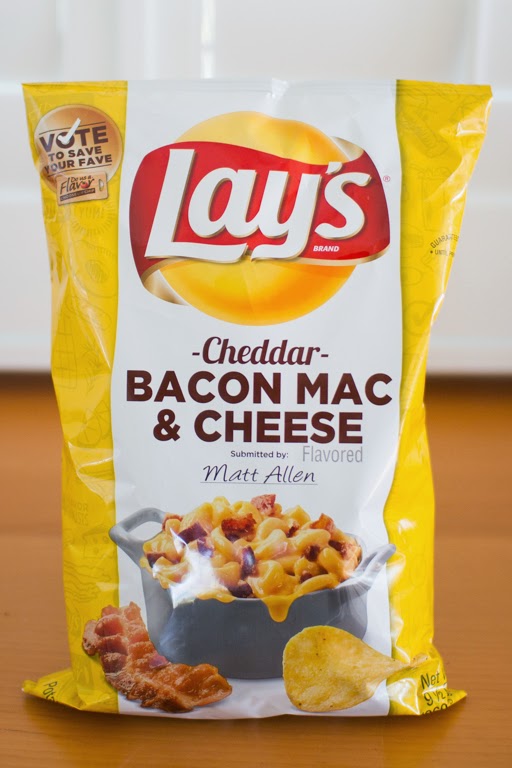 
I am a firefighter and we love to cook Bacon Mac & Cheese. Nothing goes better with it than Lays potato chips. 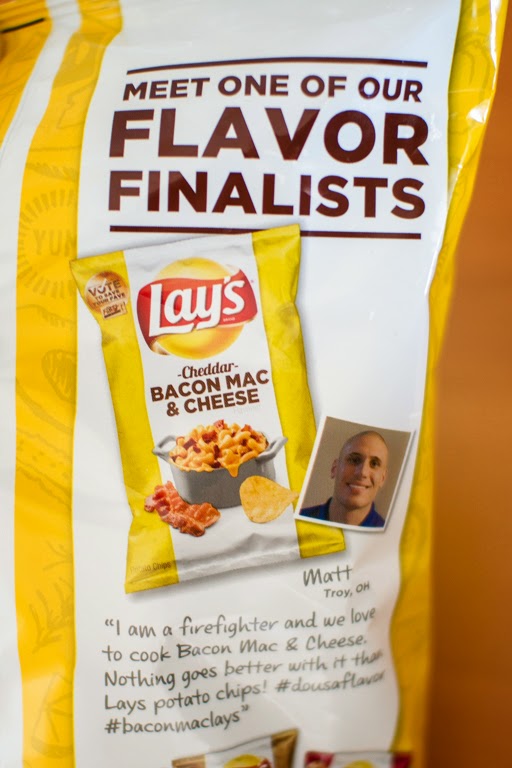 Is there any doubt that this would be delicious? The bacon flavor is a smokey bbq that combines with a more mild cheese flavor. I'm not sure where Mac & Cheese comes into play, but this tastes like a smokey cheddar chip. Lots of people who tried it enjoyed this chip. 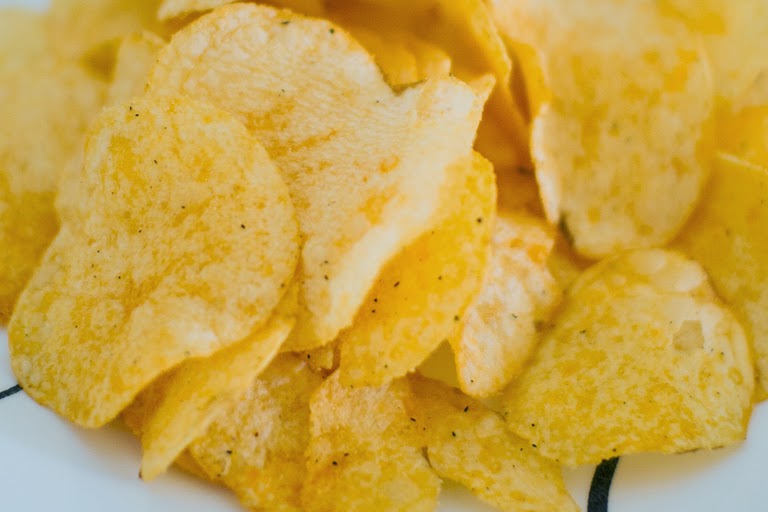 I know in Italy it is bad form to drink cappuccino after breakfast, but since we're in the US we'll finish our meal and we'll top it off with a Cappuccino. 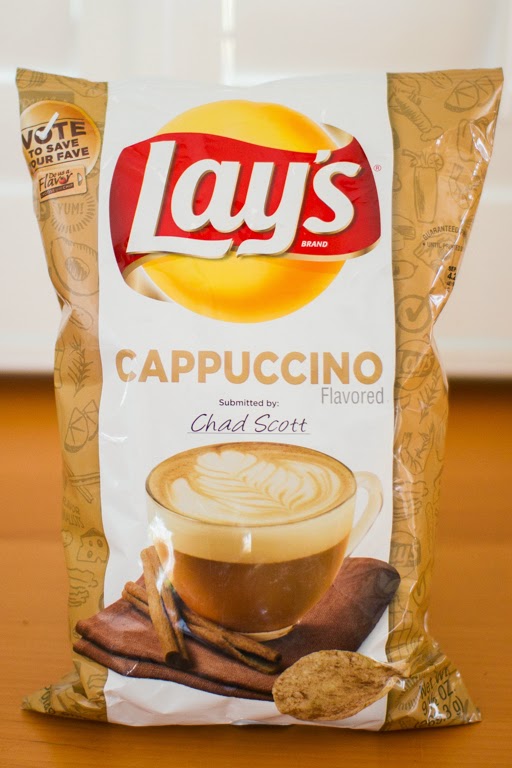 Chad Scott wants us to try his cappuccino flavored chip.


Cappuccinos are my lifeblood. A cappuccino potato chip lightly dusted with sugar... I may never put them down. 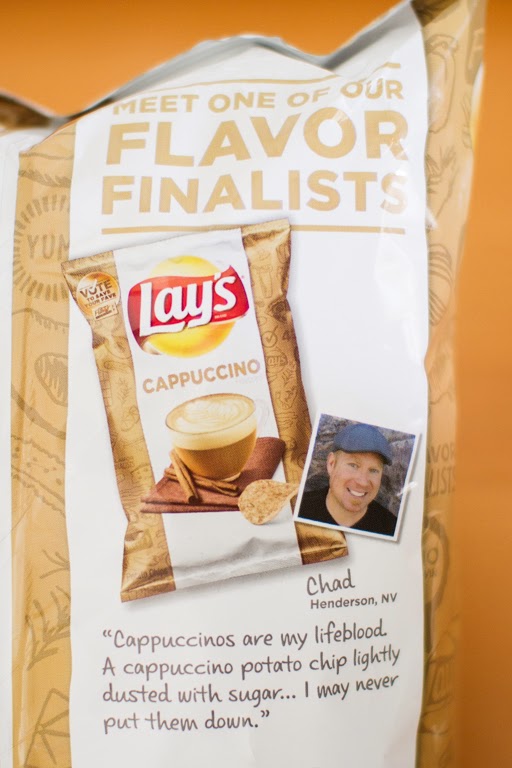 Cappuccino huh? I'm not a huge fan of coffee in the first place, but I did let a few others try it too to get a wider opinion. It tasted just like I was expecting. A mild coffee flavor with a hint, but not much, of sweetness. The general consensus was that the flavor needed something else, like cinnamon or something, but even then, you would only want to eat a couple chips and then you'd be done. 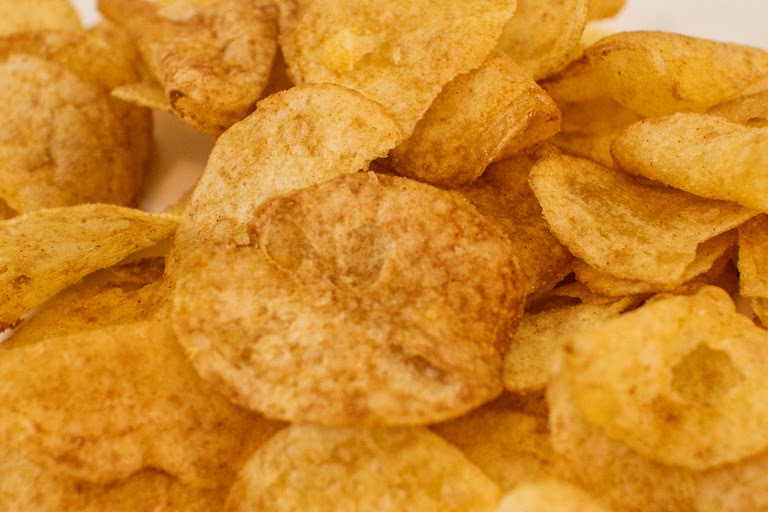 The stakes for these finalists are pretty high. Just for being chosen, each of them will be winning $50,000, but if their flavor is chosen as the ultimate winner, they get even more!
The Grand Prize winner will receive either a) One Million Dollars $1,000,000 or b) 1% of the total net sales of their flavor for a 1 year period. That's some serious coin we're talking about.

Of all the people who I was with when they tried them, the favorites were Bacon Mac & Cheese and Wasabi Ginger. The Bacon Mac & Cheese wasn't anything unique and it tastes like something I've had before. The Wasabi Ginger definitely gets points for being original and I do like that it's spicy.
For the least liked flavors, the Cappuccino usually took third with the Mango Salsa being the worst (including one person spitting it out after tasting it).
So who am I going to give my vote to? Hmm. My vote goes to.... 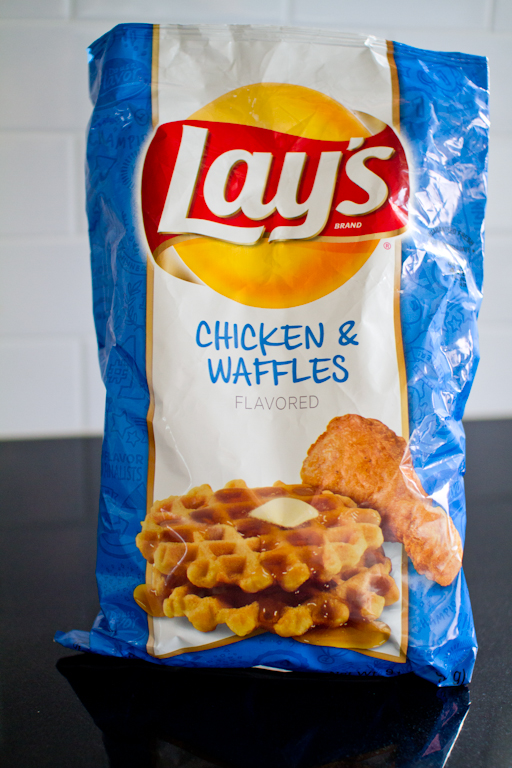 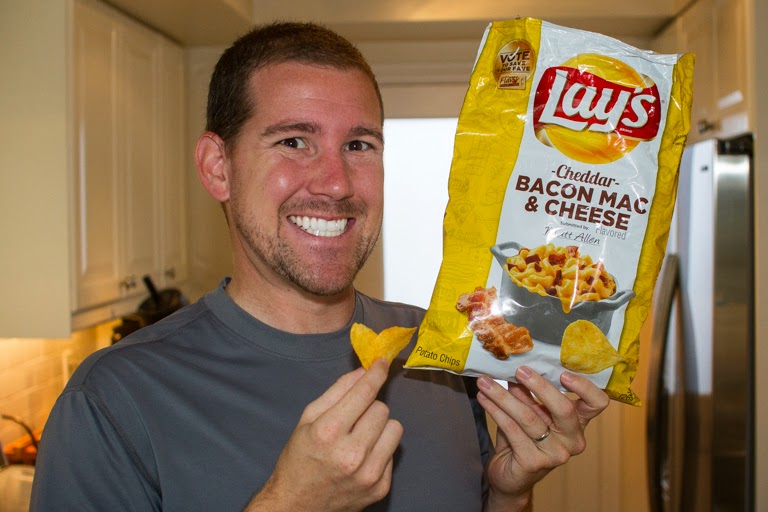