T's cousin Michael, his wife Lindsey, and their daughter Macy came out to visit. They spent the first few days at our house hanging out, then spent their last 3 days at Disneyland. After work on Tuesday, T, Ian, and I hopped on the freeway and joined them. 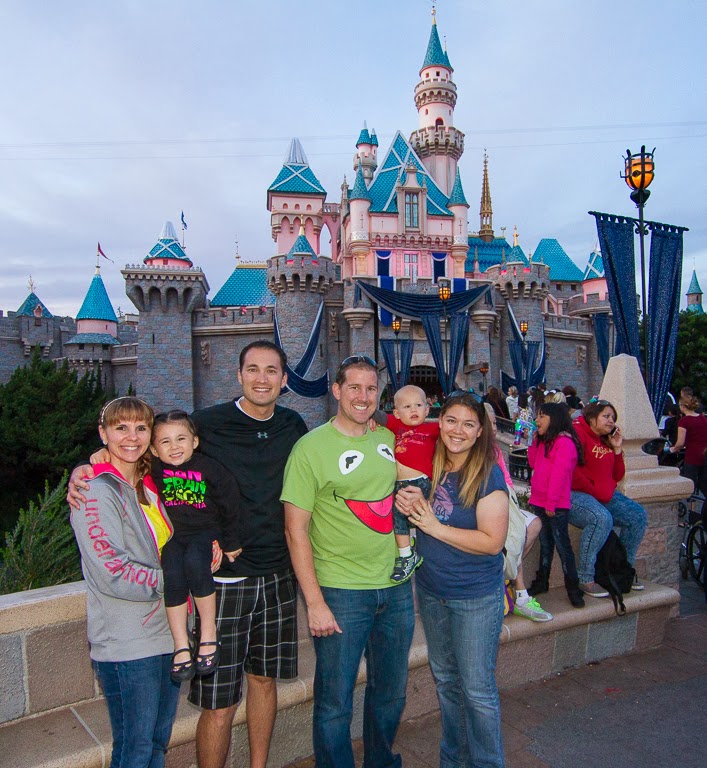 As luck would have it and with no pre coordination, as soon as we went through the security checkpoint, we ran into them in the esplanade. 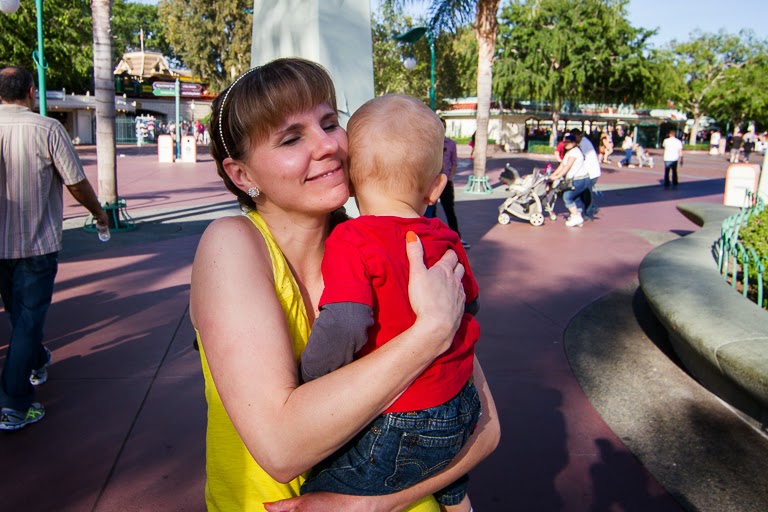 After reading about me raving about the Big Thunder Ranch BBQ, Michael requested we do dinner together there. I made reservations a couple weeks before and once we arrived, we were seated almost immediately. 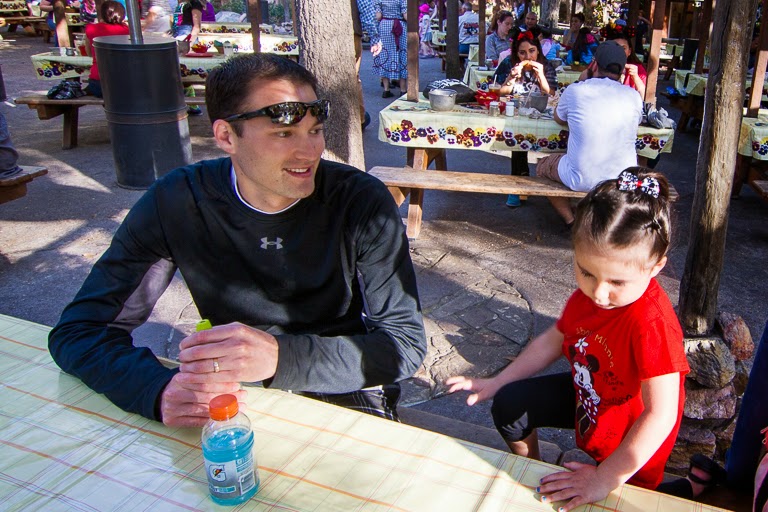 Ian's eaten here before. Maybe he remembers it. He was excited to be here. 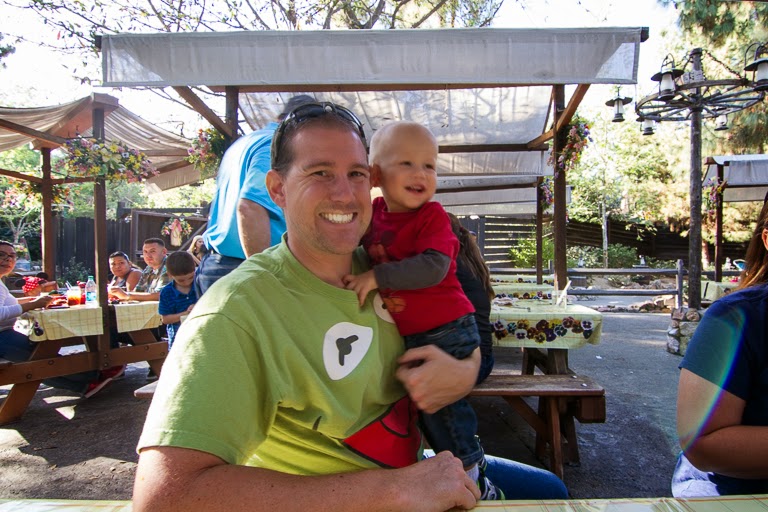 Our food was surely going to come out soon, but once I mentioned there was a petting zoo with goats nearby, Macy and Lindsey were excited to see it. I took Ian to go too, while Lindsey and Mike stayed at the table.
Ian staring down a goat. 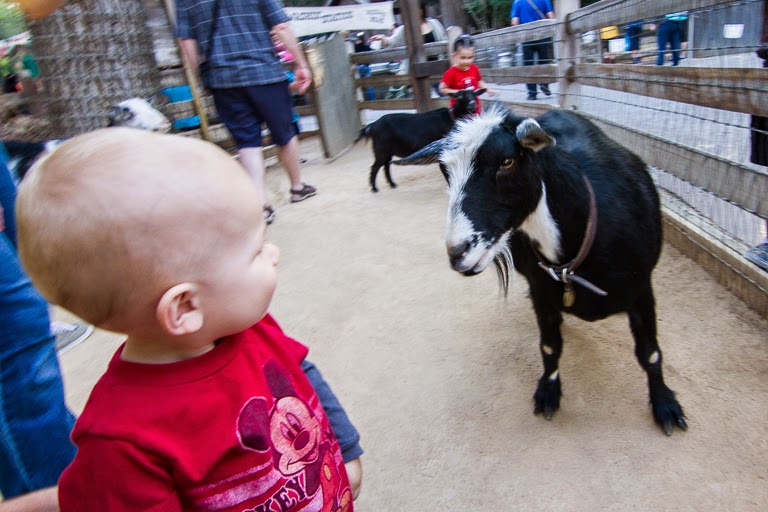 I found another goat! 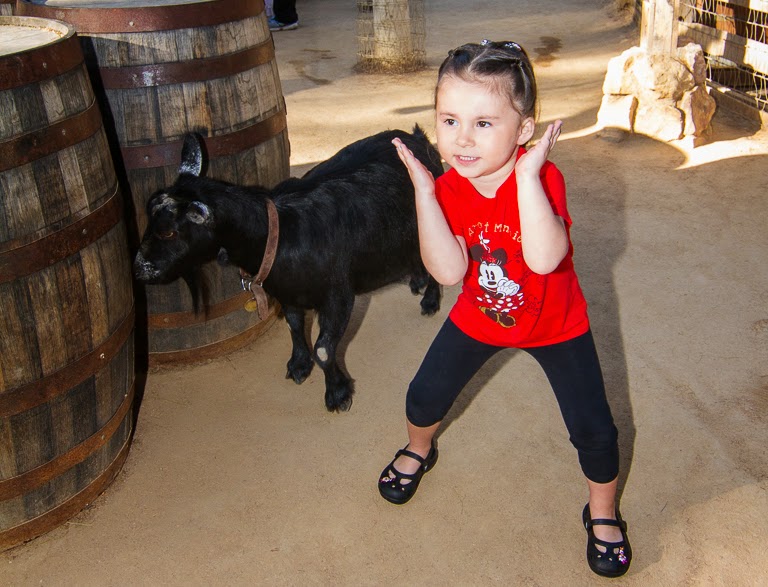 Being very gentle petting the goat. 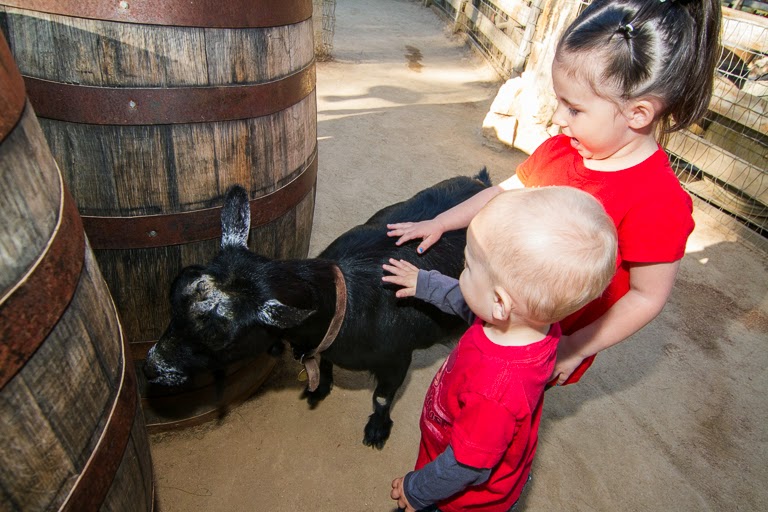 Near the back of the pen was a special treat. This ranch hand had two baby 5 month old goat kids out. 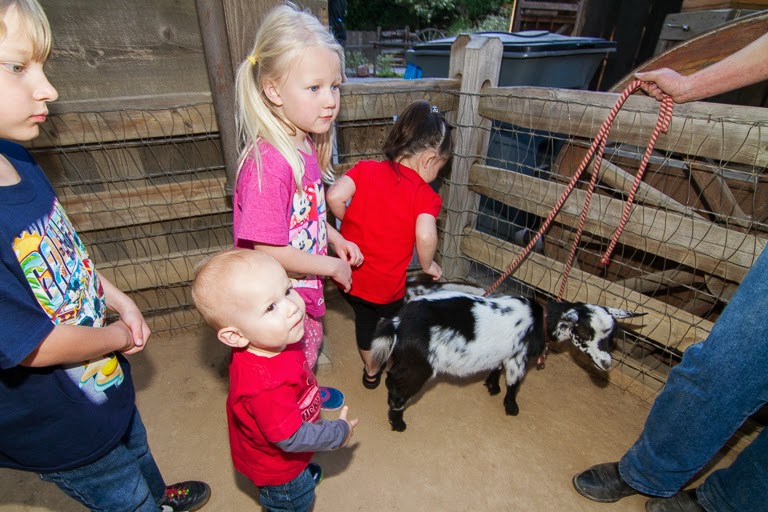 Babies are so cute! 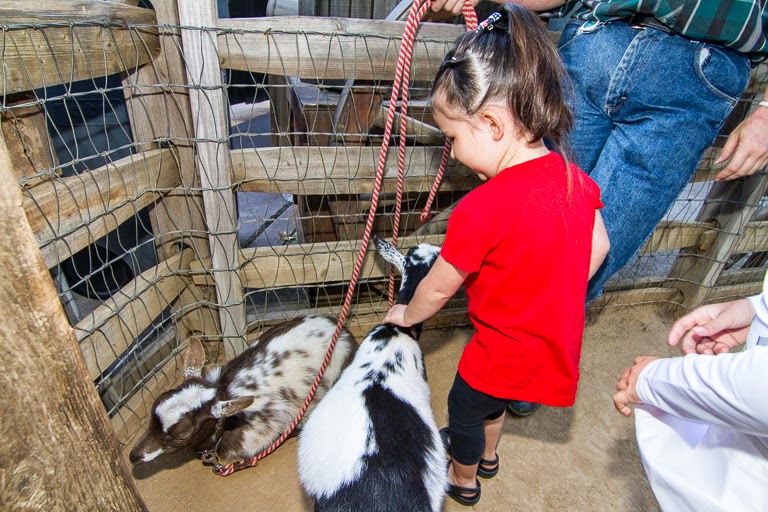 Macy was petting the head of the goat. Ian went to pet the tail when all of the sudden it started flicking back and forth, which startled him a little. Probably not a good idea to pet that side buddy. 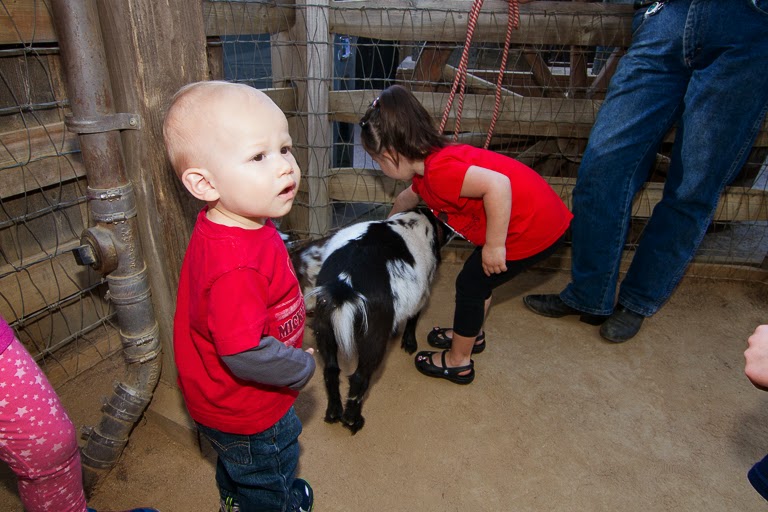 That's better. I was totally expecting him to get licked, but he somehow avoided it. I'm sure the food is here by now so it's time to say goodbye to the goats. Ian waved goodbye while the goat let out a little goat bleat. 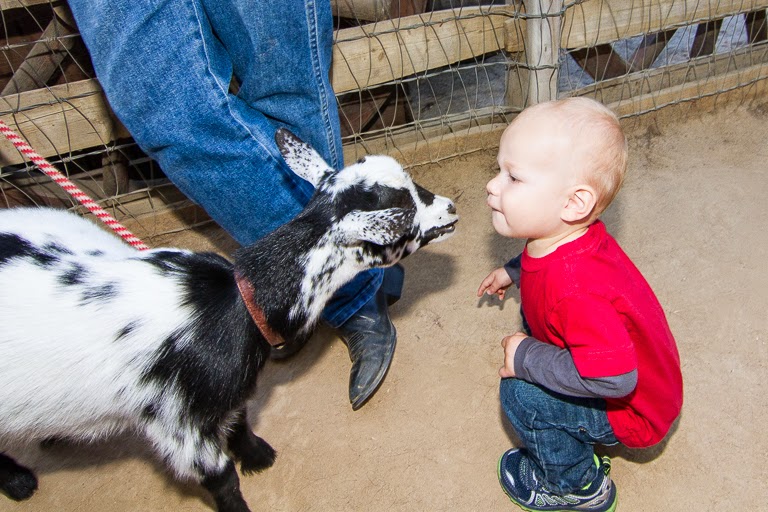 On the way out we said a quick hello to the calf right before we stopped by the sink to wash all the way up to our elbows with soap and water. 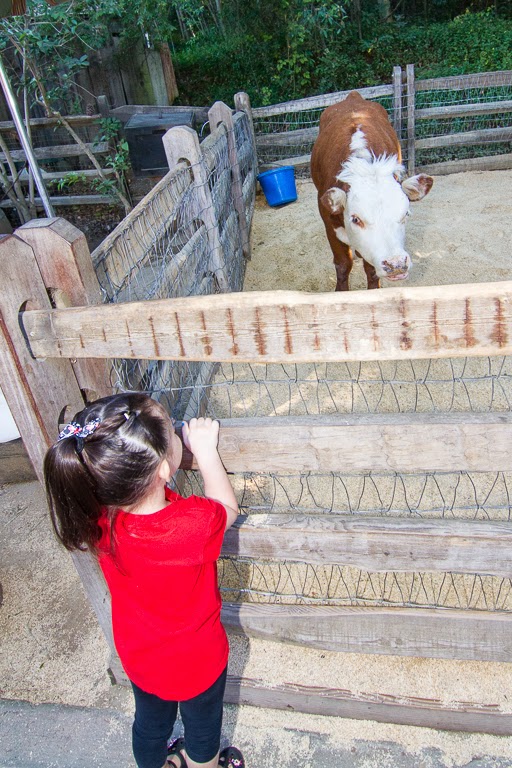 Food's here! Ian taking a crack at a corncob wheel. Dinner here is always so much better than lunch. At lunch you don't get corn cob wheels. You also don't get my favorite item on the menu... 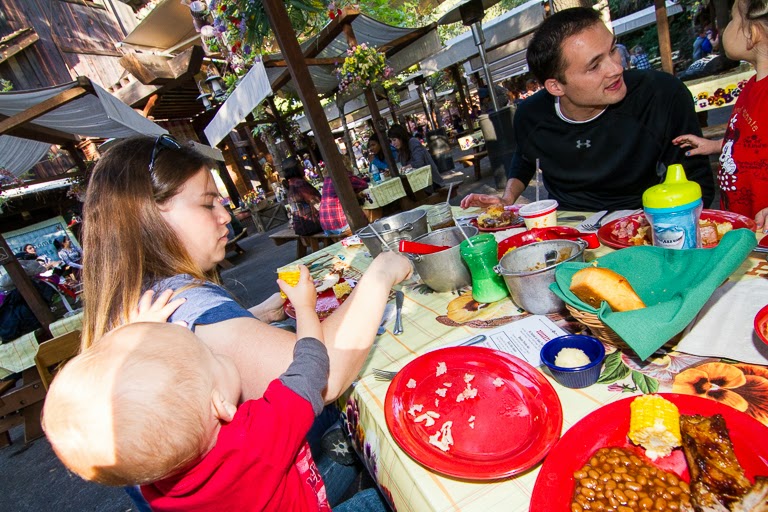 Smoked Sausage! The best part of this all-you-can-eat place is that once you finish the first round they bring you, you can request items specifically. We asked for another bucket of meat plus a bucket of sausage and a short time later we received both! Mmm. 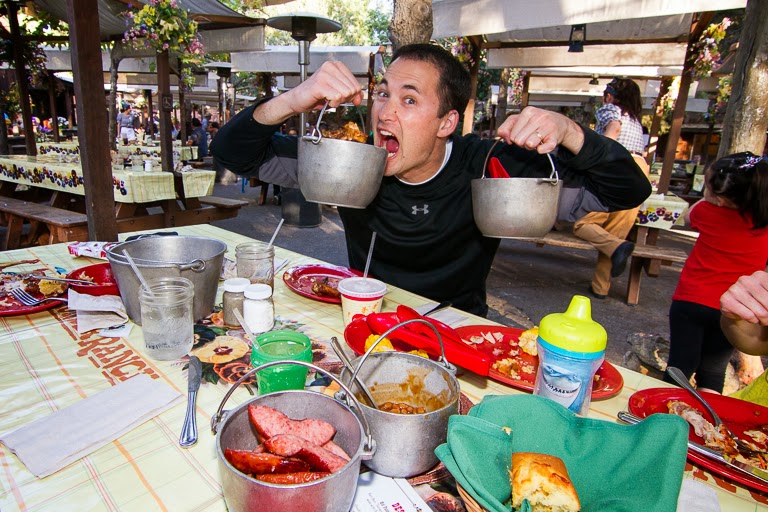 It's not only dinner, but it's also a show! Tex Tumbleweed made his way around the tables, singing, whistling, and playing his banjo. 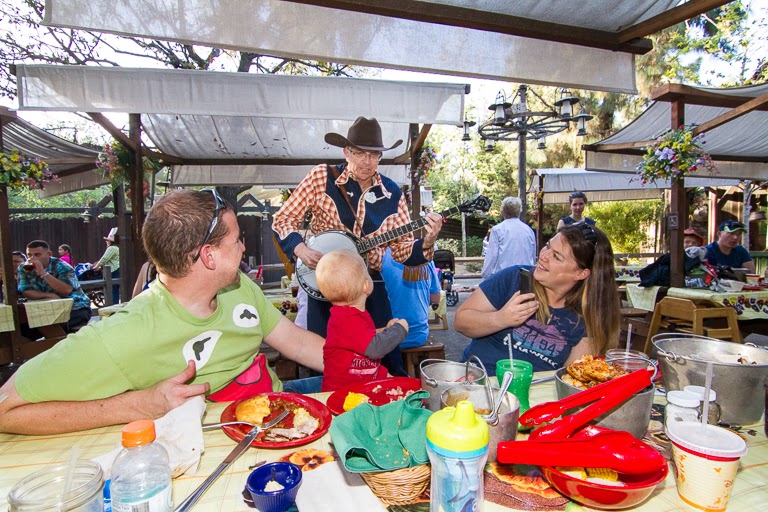 Next Miss Chris invited all the kids up on stage to sing. Macy joined all the other kids, while Ian stayed off to the side with us. 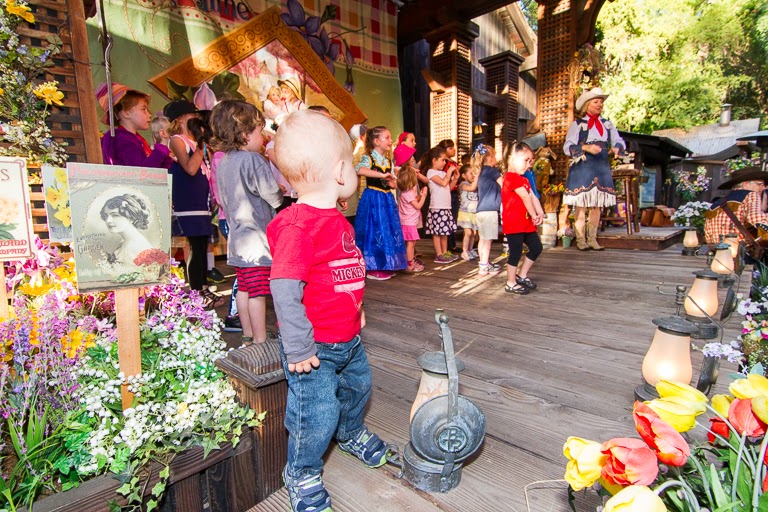 Then Miss Chris made the rounds saying hi to all the tables and asking if we were enjoying the meal. 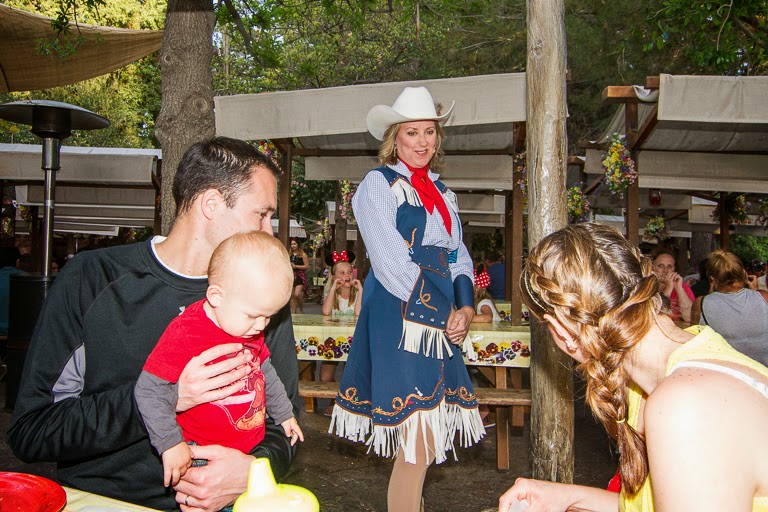 Ian and Macy enjoyed climbing on a few obstacles around the table. 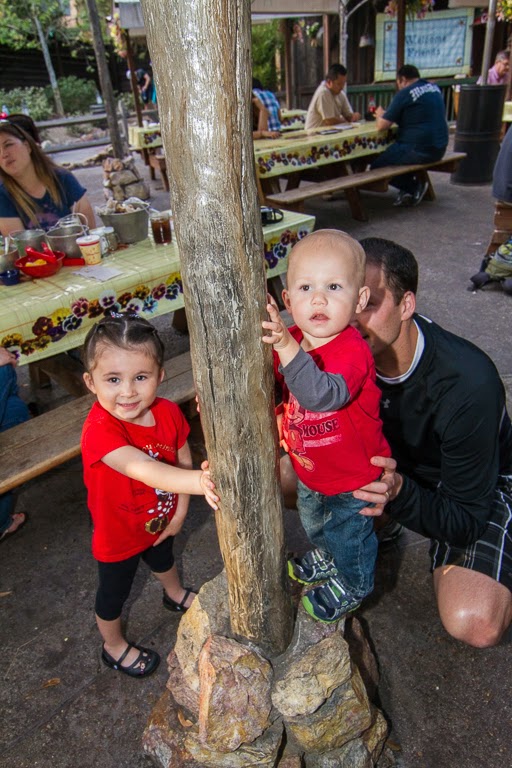 After stuffing ourselves on dinner what's next? Dessert of course!
They say these take 20 minutes to cook, so they make you order it early. I think they just want you to order it before you feel full. 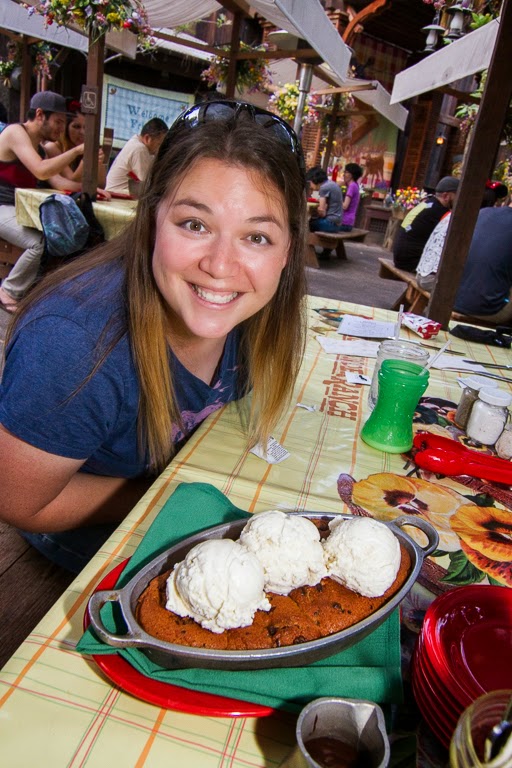 That's a pretty big portion for a little girl. 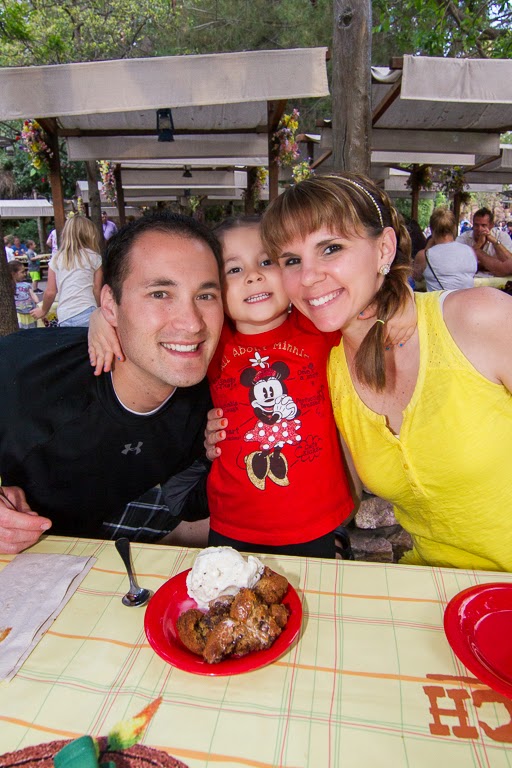 And I'm embarrassed to say between the 6 of us, we still couldn't finish Chef Cookie's Deep Dish cookie. 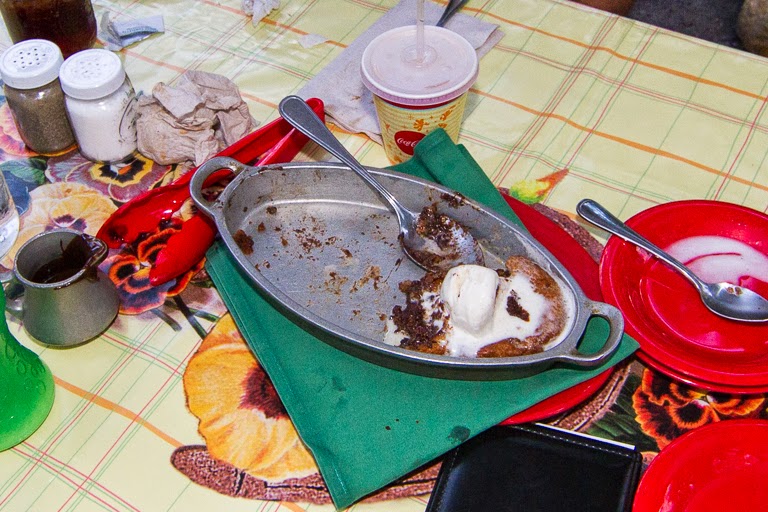 We told Ian it was time to say goodbye, so he went to give Lindsey a hug and promptly told us goodbye. Rascal. 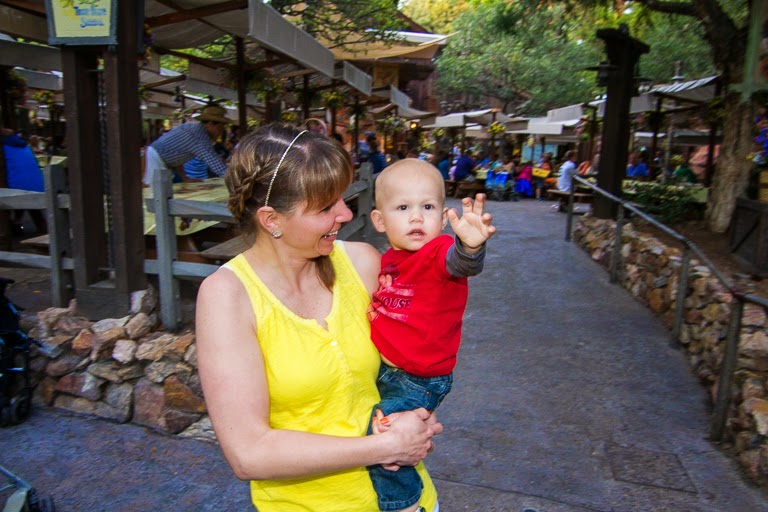 As the six us of walked to the front of the park, T and I gave Macy one of her early birthday presents. 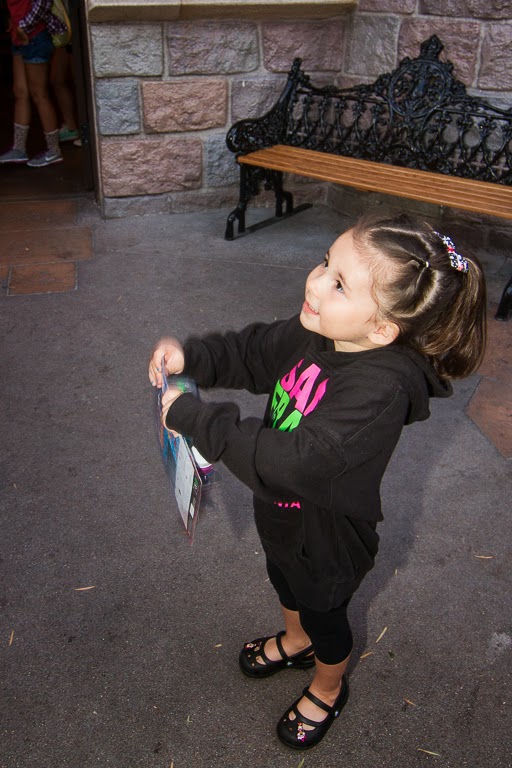 These bubble guns are awesome! 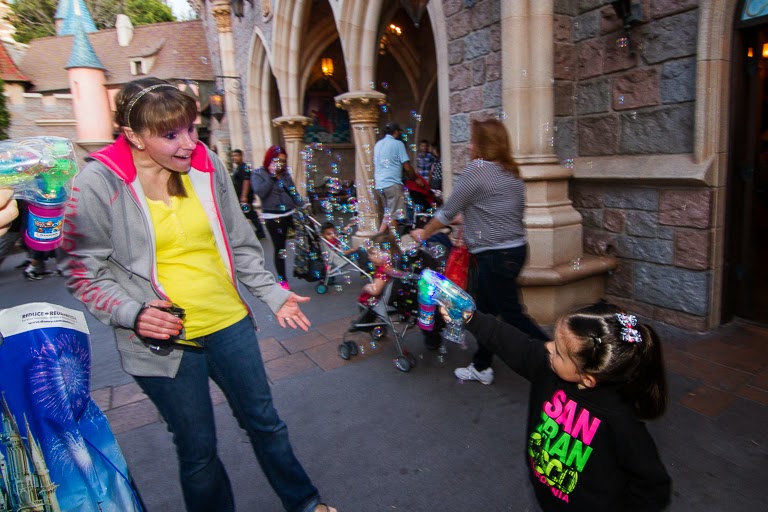 Stopping for the obligatory castle photo. 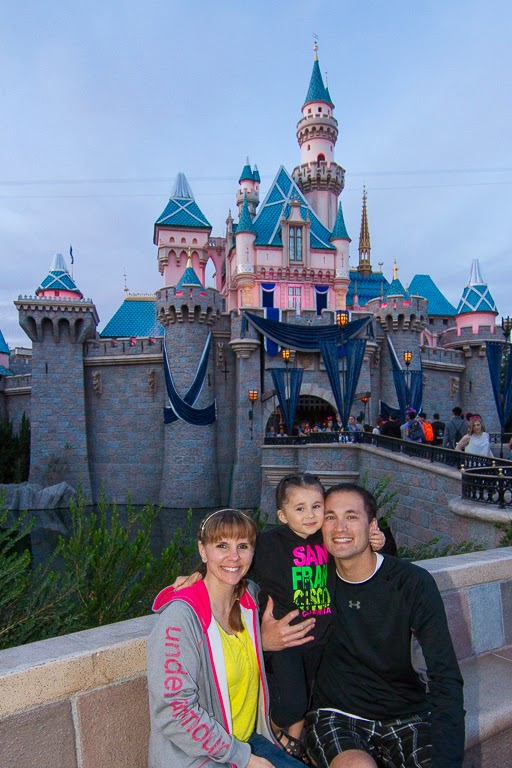 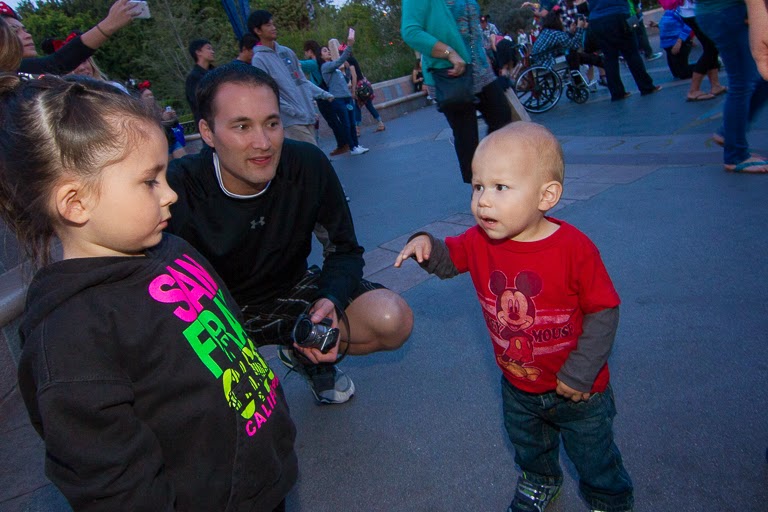 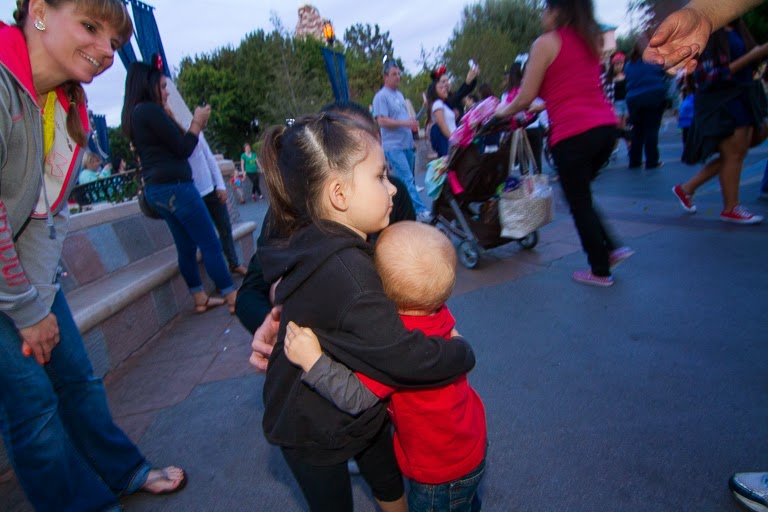 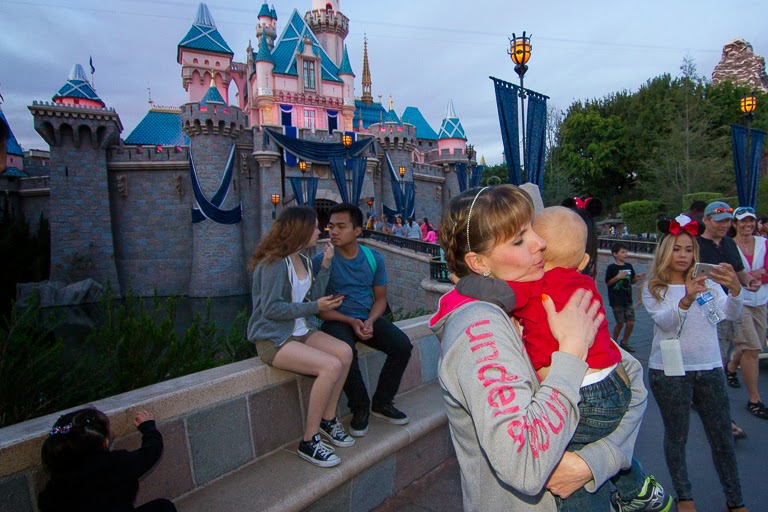 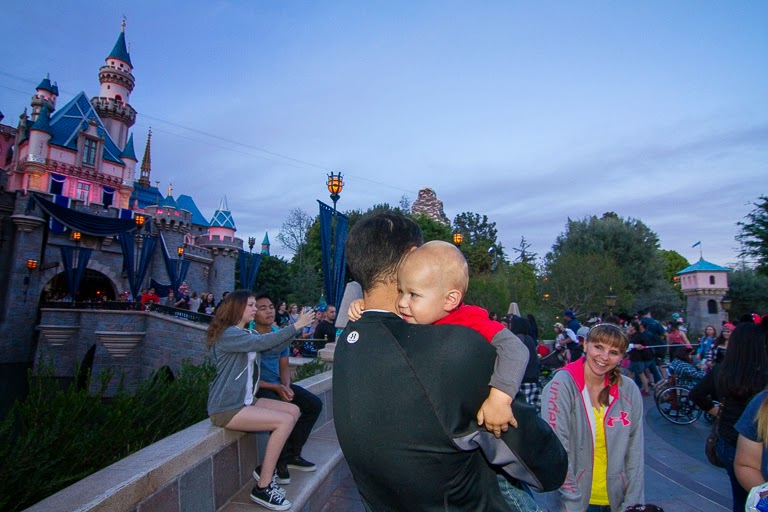