Casa Bonita in Colorado, the most entertaining Mexican restaurant in the world! 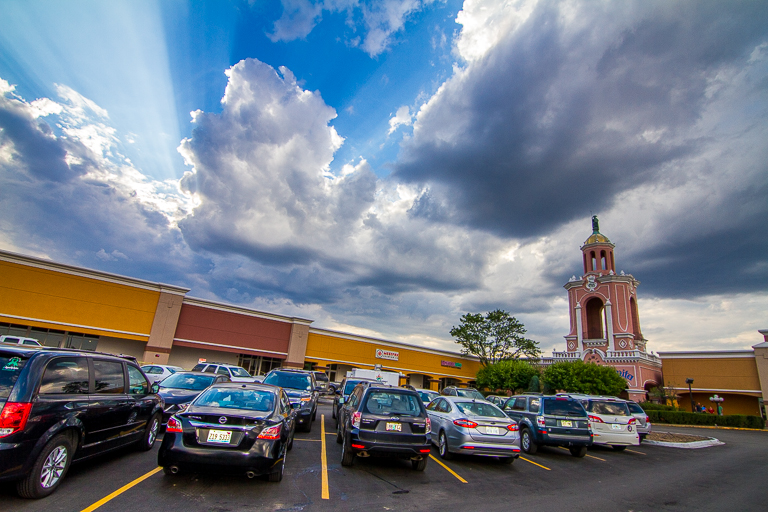 Unfortunately Alli came down with something a couple of days before, and we decided it was better if the kids and T stay in Michigan to rest up before flying home. So instead, it's just me flying to Colorado.
Getting in around dinner-time afforded us the opportunity to eat at the most entertaining Mexican restaurant in the world, Casa Bonita! Celebrating 42 years of operating, Casa Bonita has been serving all-you-can-eat Mexican food since 1974. 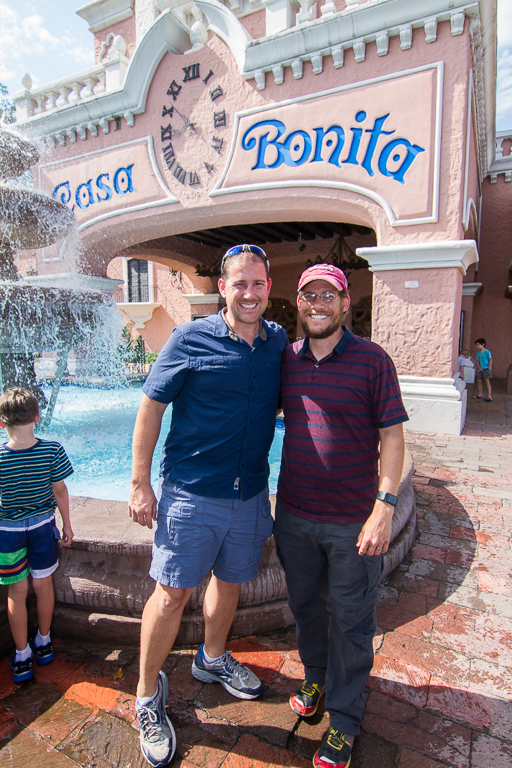 I totally planned to do a big write-up talking about all the details, but in doing my research I found a fantastic video that does a much better job then I could ever hope to do.

I remember some of my co-workers remembering the South Park episode that featured Casa Bonita, but not realizing it was an actual restaurant, and not some fantasy creation. I can see why they'd think that though. I mean, what Mexican restaurant have you been to that had cliff divers off a 30 foot waterfall, puppet shows, Black Bart's Hideout, and an arcade.

After placing our order, we quickly grabbed our trays and silverware and continued down the line. 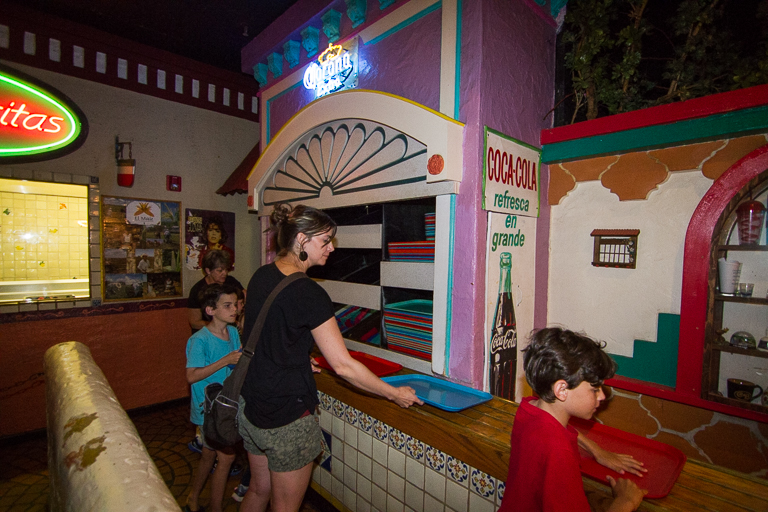 For just $15.29, you get a chicken or beef dinner including a crispy taco, two enchiladas, a cheese enchilada, mexican rice, and beans, plus chips and salsa. 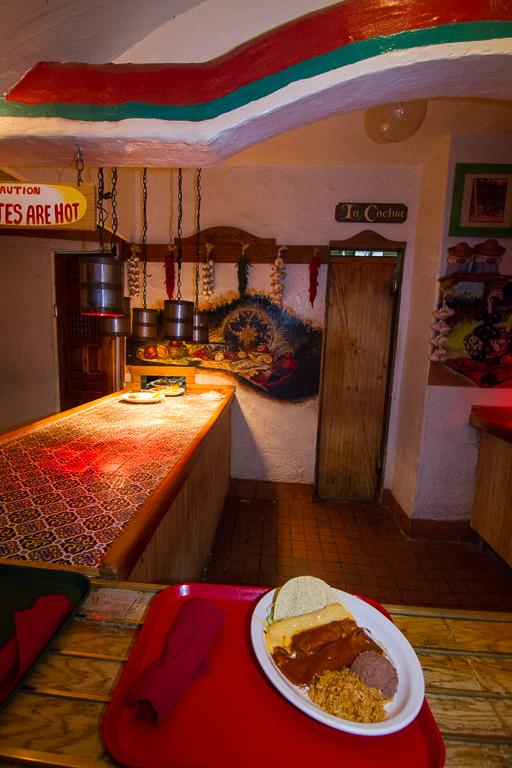 After collecting your food, you continue into the main dining room, which seats over 1000 people! 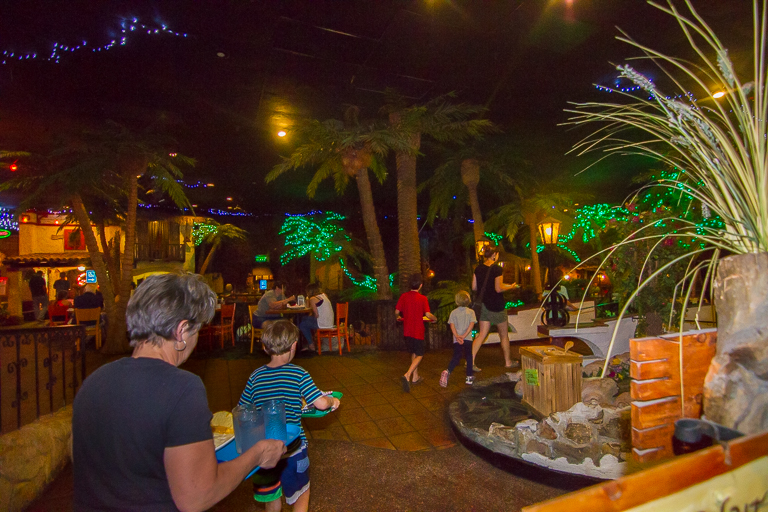 I think the ambiance is great here. It's total eatertainment experience here. 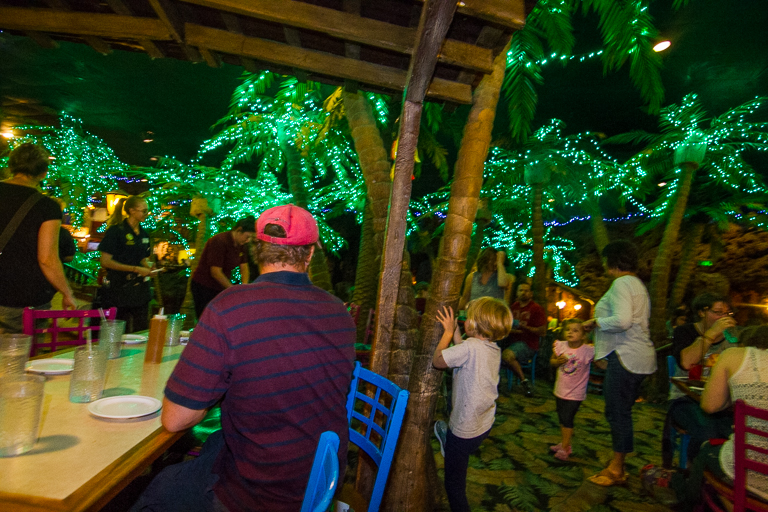 The food is average here, but there's one item here that is the best I've ever had anywhere. And they give them away for free! 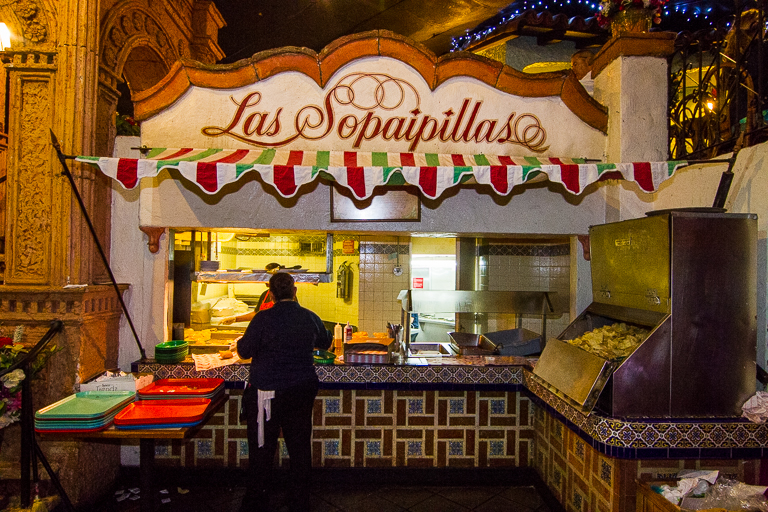 The Sopaipillas are continuously cooking and always come to your table hot and fresh. 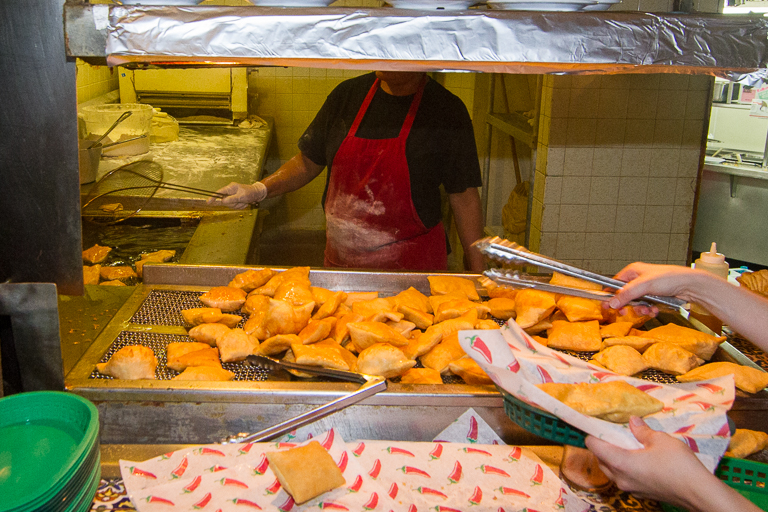 Bite off a corner, fill the insides with honey, and it's hard to think of a better dessert. 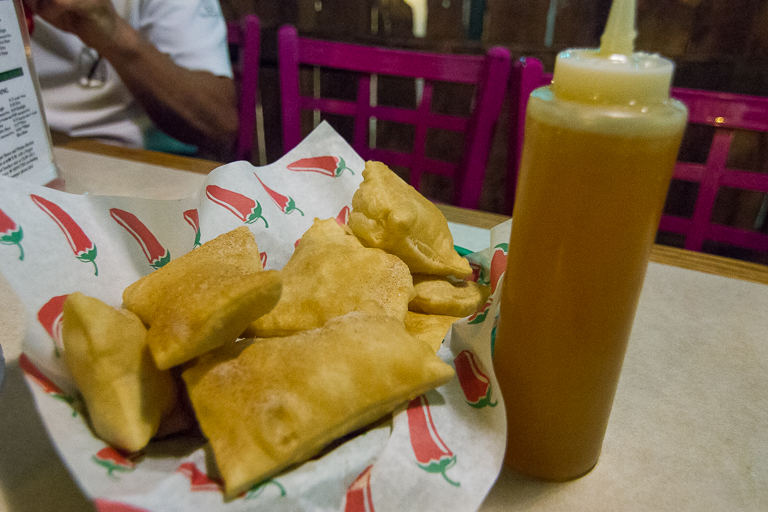 Watching one of the many shows, culminating in someone taking a plunge in the water below. 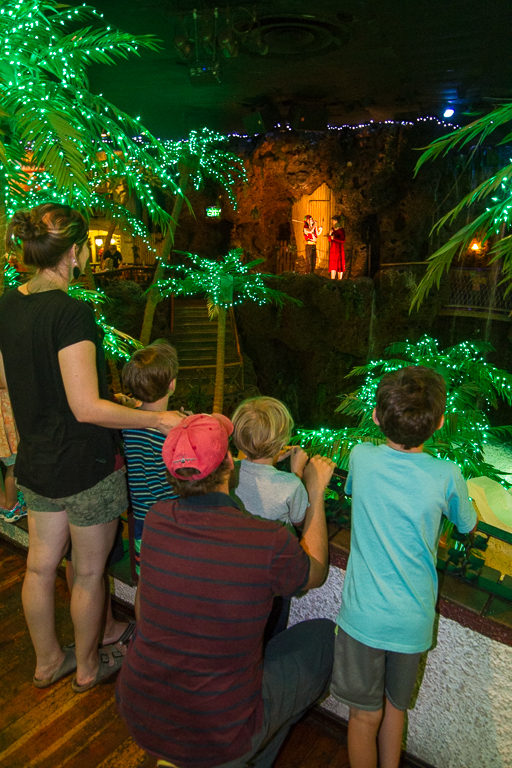 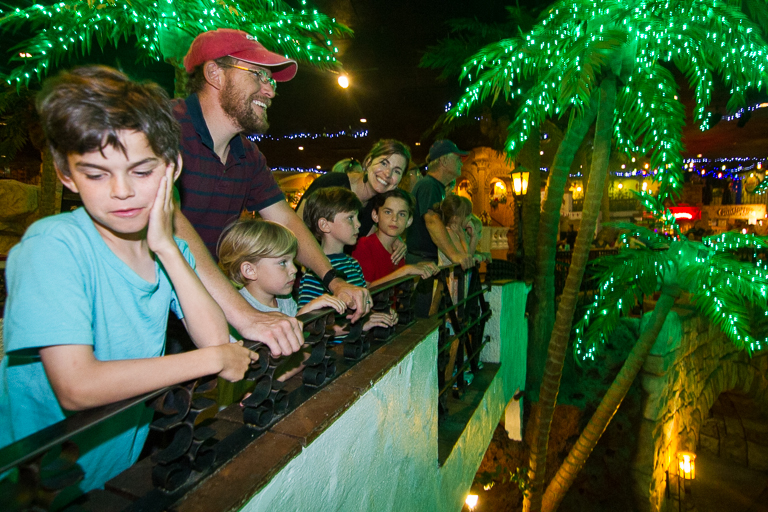 Next we explored Black Bart's Hideout, with lots of scary things inside. 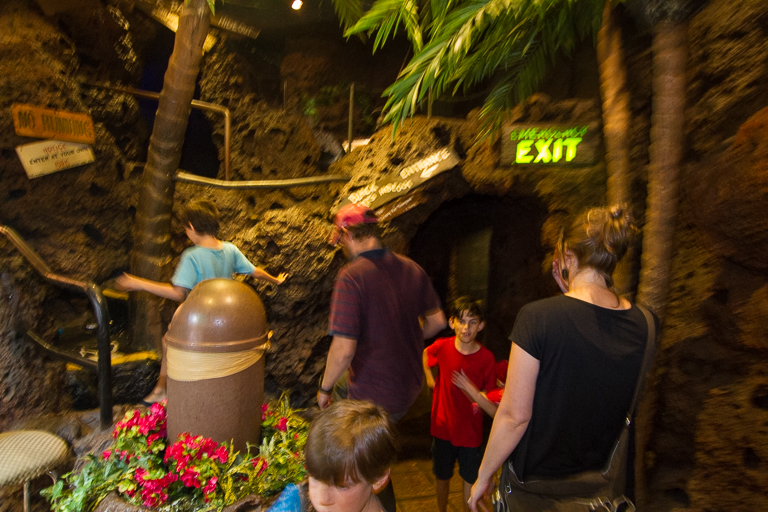 Everyone had fun in the arcade. 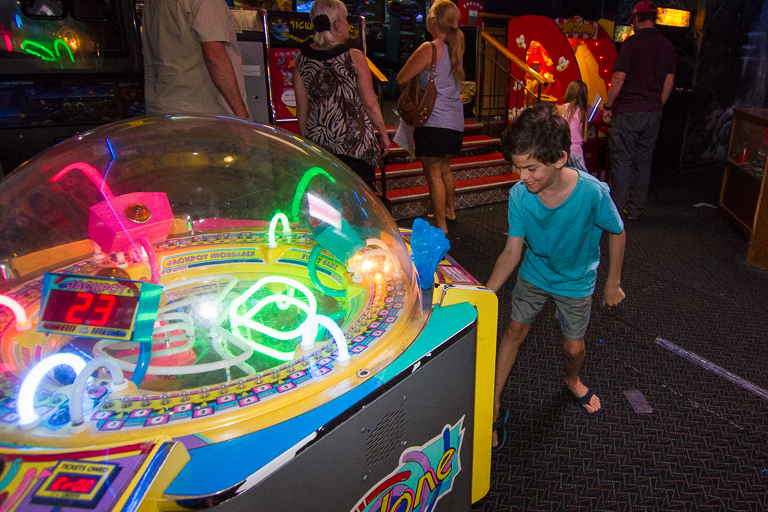 Thanks to Pop Pop, all the kids had plenty of tokens to keep them going. 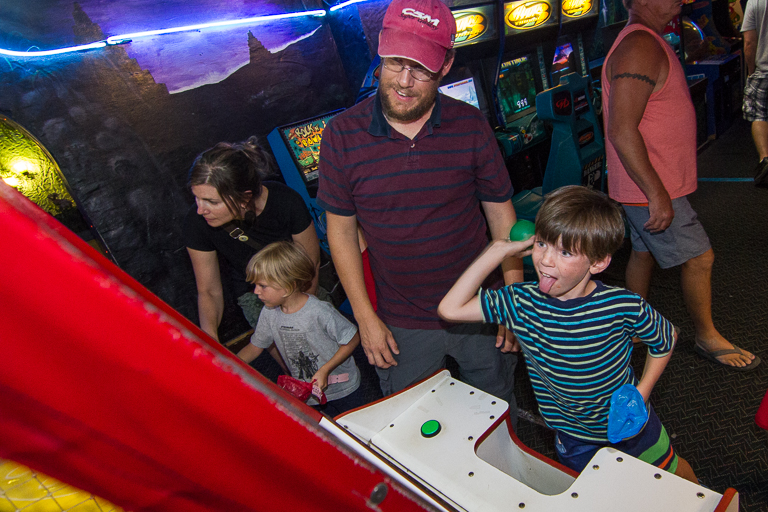 Gripping her tickets in one hand, but focused on stomping those spiders.

The boys realizing that if you have 3 players, you'll do even better. 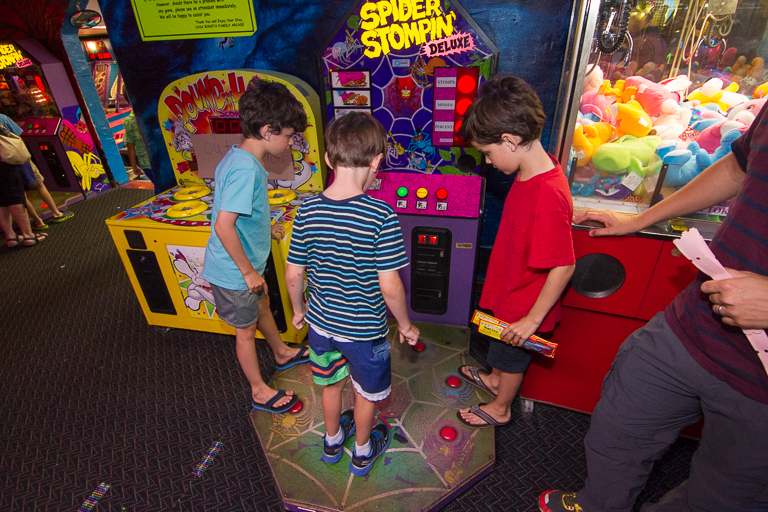 Time to redeem tickets for fabulous prizes. I liked how the attendant was lenient on the number of tickets needed, saying things like "you need 5 more tickets for that, but I really like your shirt, so I'll give it to you." 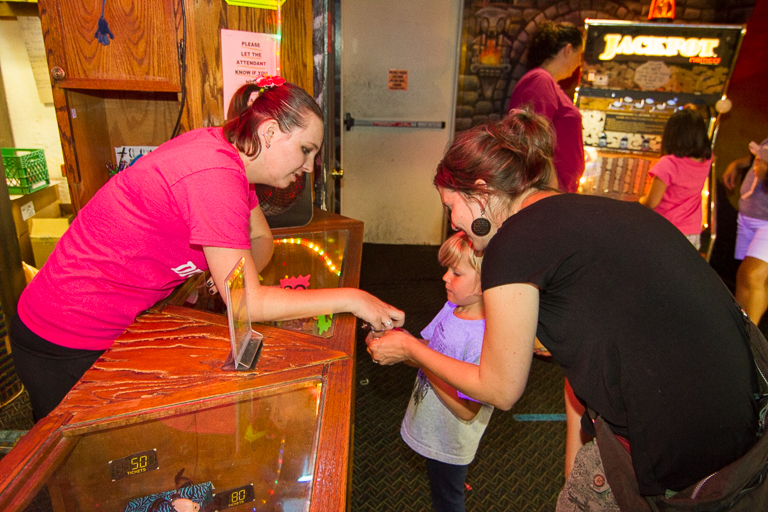 Happy with his loot. 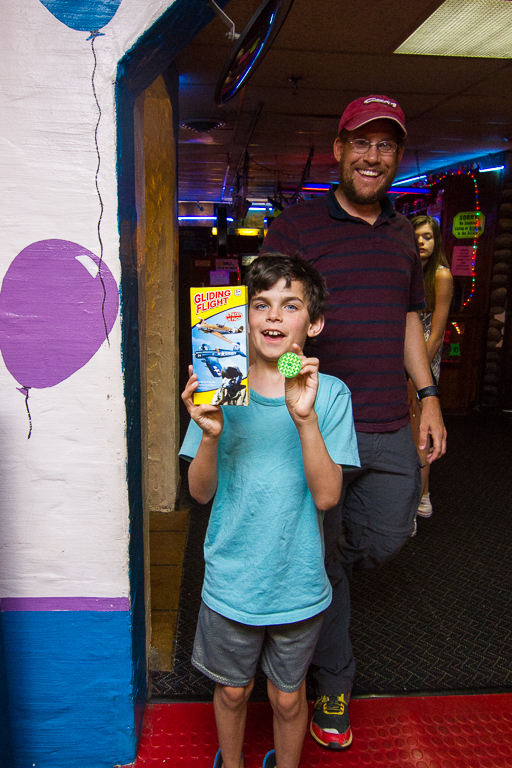 Every hour there is a puppet show! 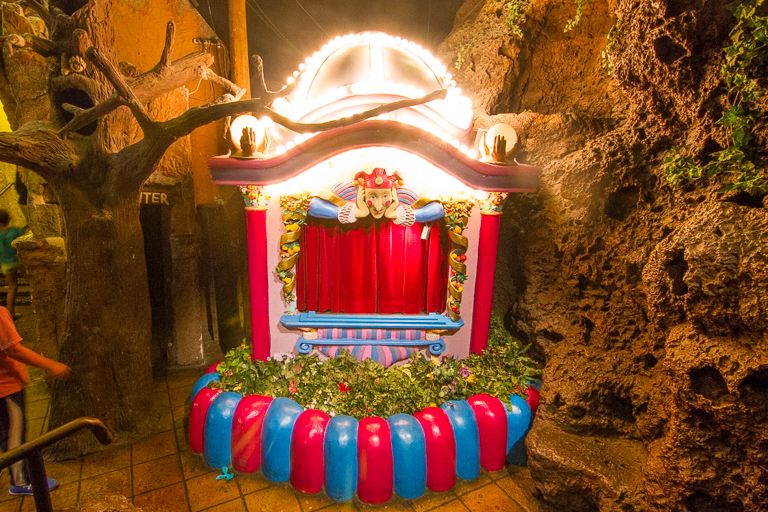 The kids made sure to be done with the arcade to make it back in time for that. 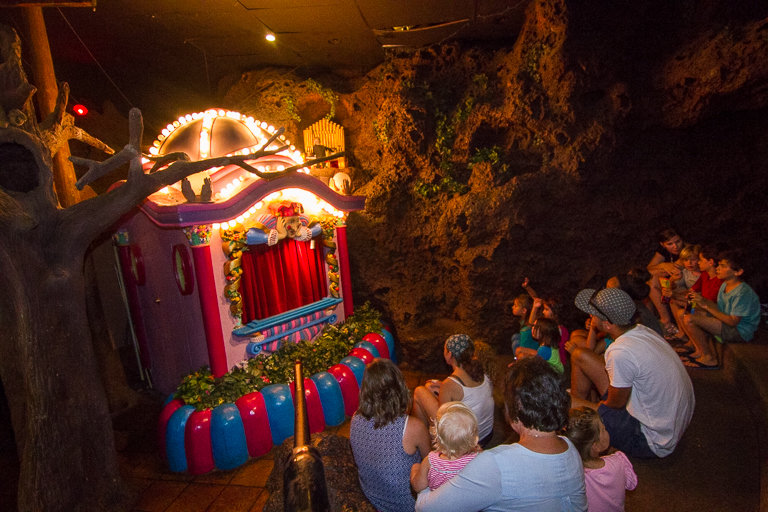 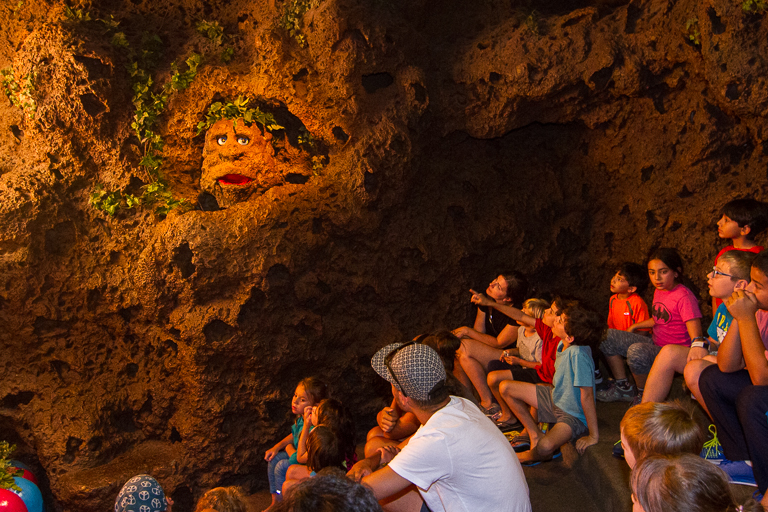 Being from Colorado, my family has gone to Casa Bonita many times. One of the stories that we love to tell involves a 5 year old Joe. One of the acts on the main stage involves a 500 pound gorilla with its trainer on stage, that gets loose!

The gorilla came by my family's table then disappeared, but when my parents looked around, 5 year old Joe had also disappeared! Where was I? Hiding under the table, out of the reach of that gorilla! 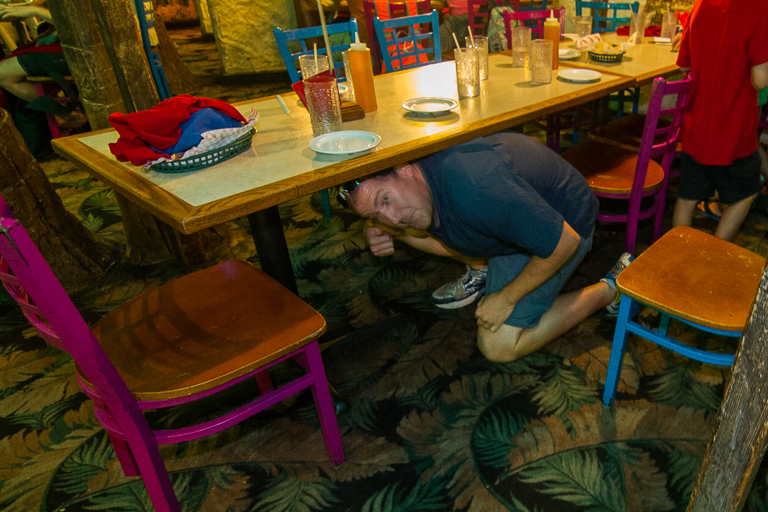 Almost time to leave, but let's go down to the pool and watch the cliff diver. 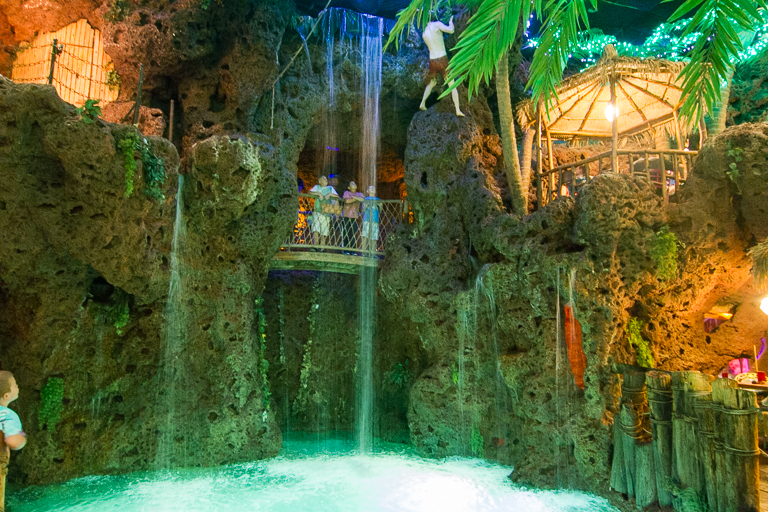 After climbing to the top of the 30 foot waterfall, he dove in! 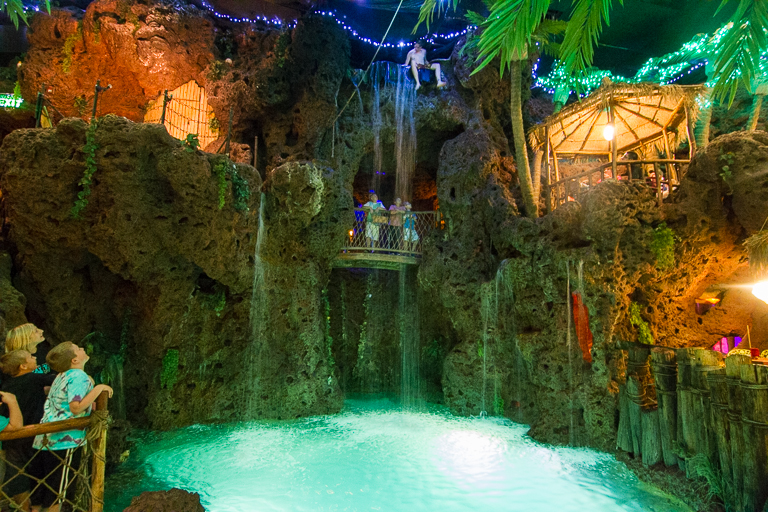 And before leaving came to give a high five to all the kids around the pool watching. 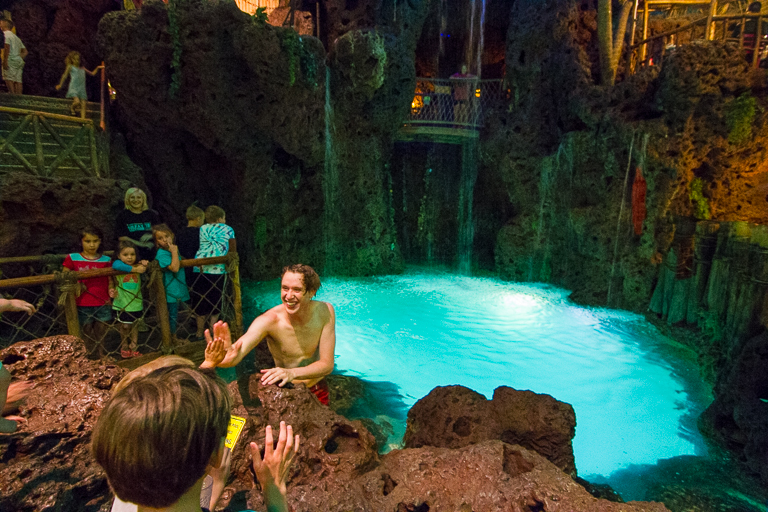 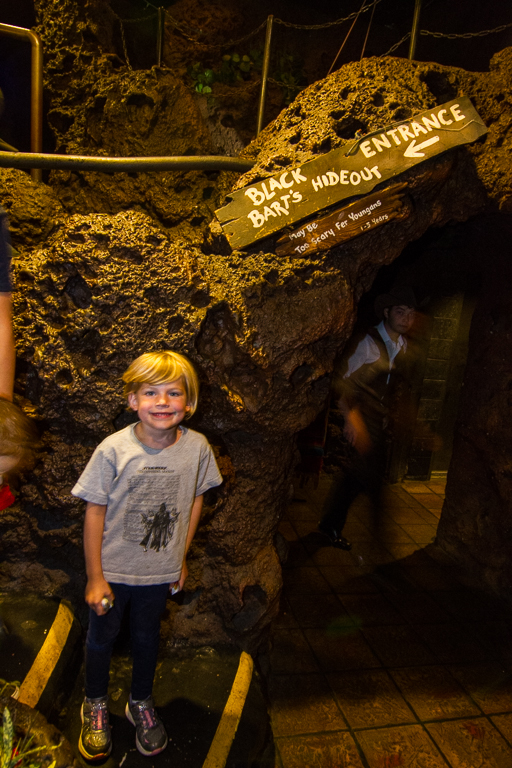 It's not scary Uncle Joe. 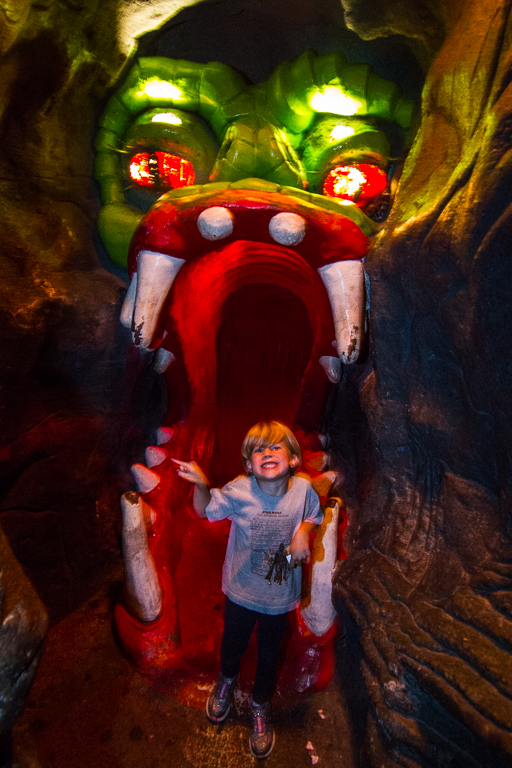 Before we go, all the kids get to visit the treasure room. 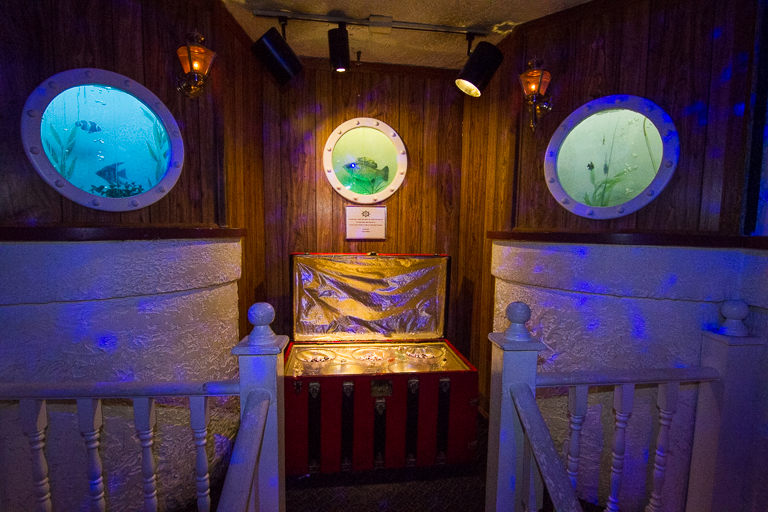 Tootsie Rolls for everyone! 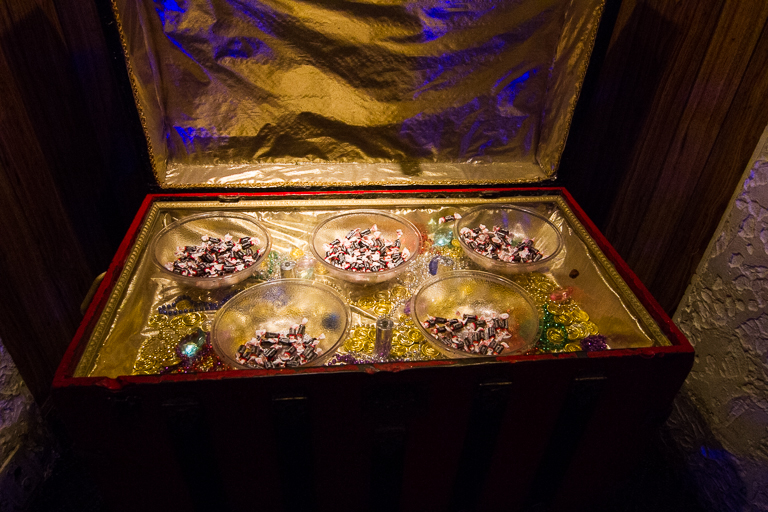 Let's mosey on out of here and head home! Tomorrow is going to be a big day! 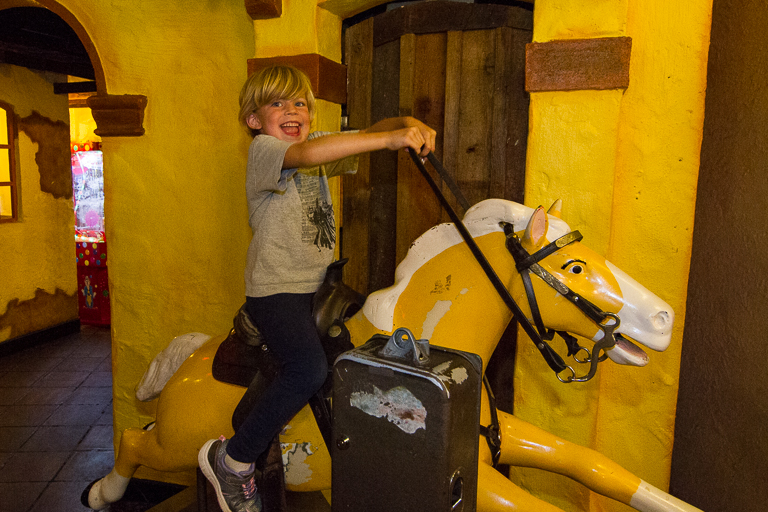