Our Michigan family visit is nearing its end, but there's one more special outing planned. On the very last full day of the trip, I'm going to Cedar Point!
Cedar Point is America's 2nd oldest operating theme park, opening in 1870! The park features a world record 71 rides, including 16 roller coasters! That 16 roller coasters is the reason I'm here today! And that's second in the world only to Magic Mountain with 19 roller coasters! I don't get enough roller coasters back home, so I was very excited for this trip. 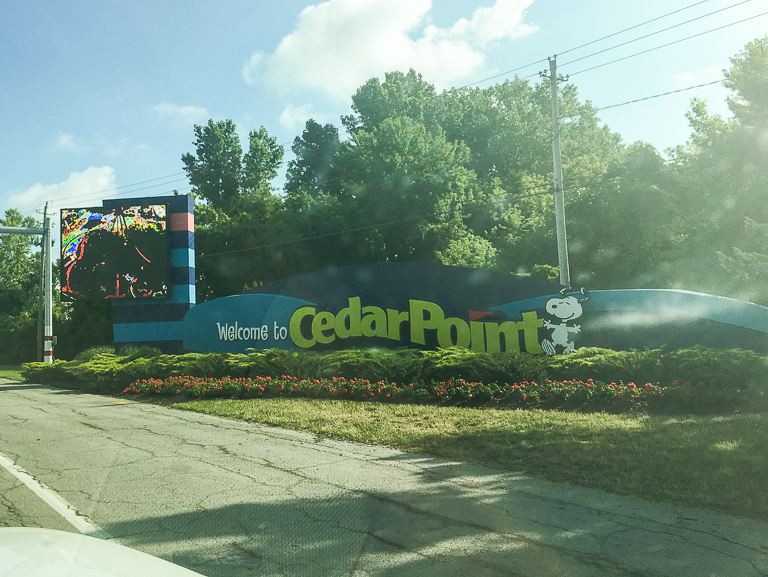 Just a short 1:40 drive from the house in Michigan to Sandusky Ohio on the Lake Erie peninsula. No time for breakfast at the house before leaving. For me it was a gas station chili-dog to start off the day! I'm feeling pretty confident that nothing is going to get to me today! 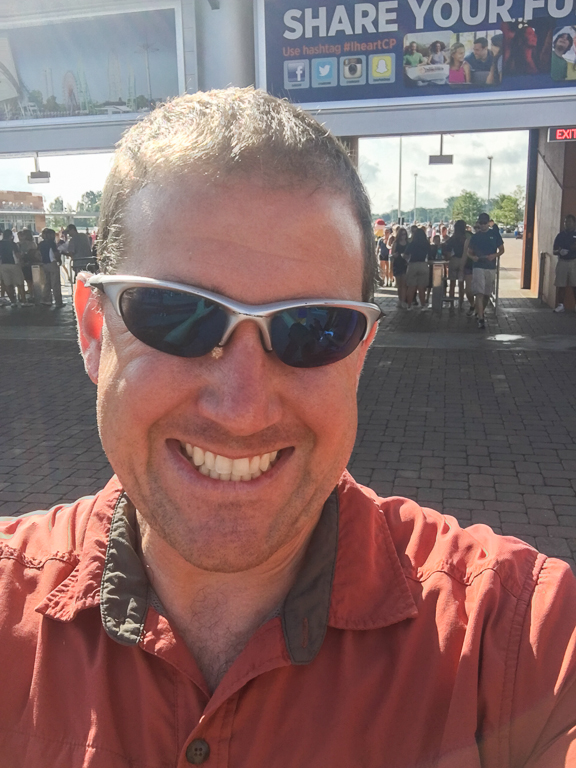 Joining me are Donald, Austin and Ethan. Roller coaster lovers all.
Arriving at 9:40am, the park was already letting people in, even though they don't officially open until 10am. 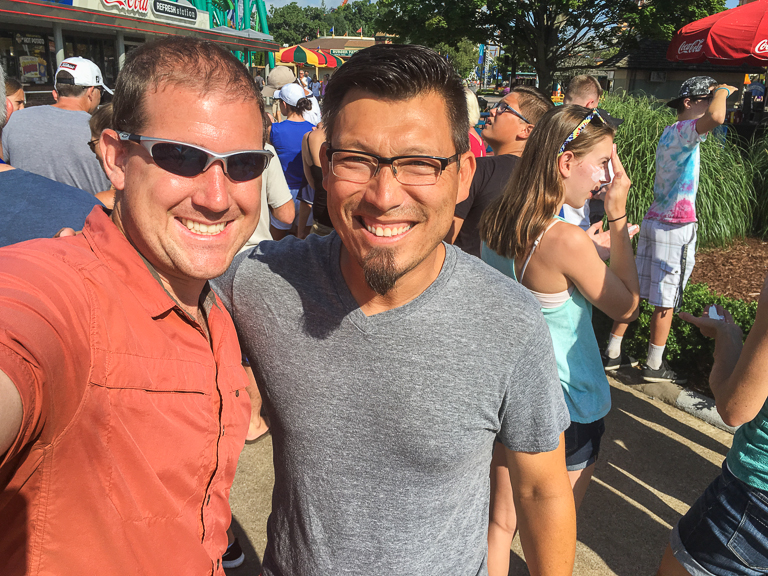 Ah, they've got us queueing up while we wait for 10am to arrive. 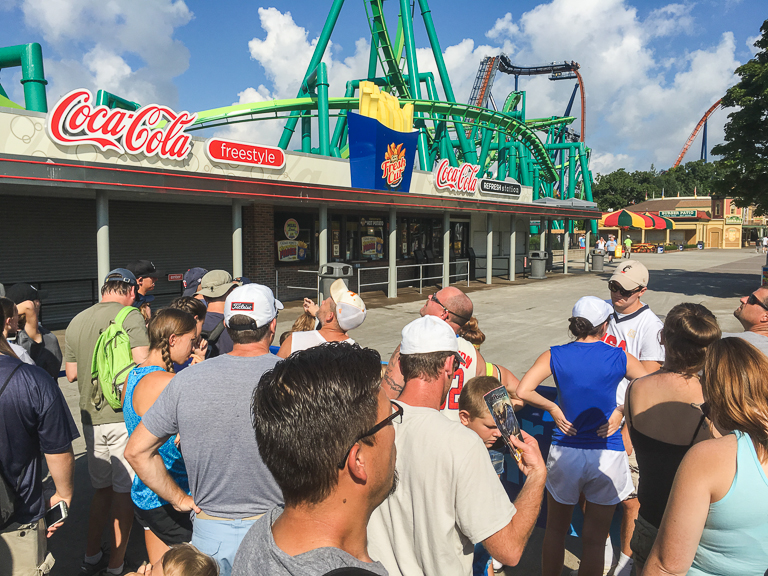 And we're off! Our very first ride of the day has to be the newest addition to the Cedar Point lineup. Valravn. Opening in May of 2016, this Dive Coaster broke several records when it opened. Tallest Dive Coaster (223 feet), Longest Drop (214 feet), Fastest Dive Coaster (75 mph) and more. 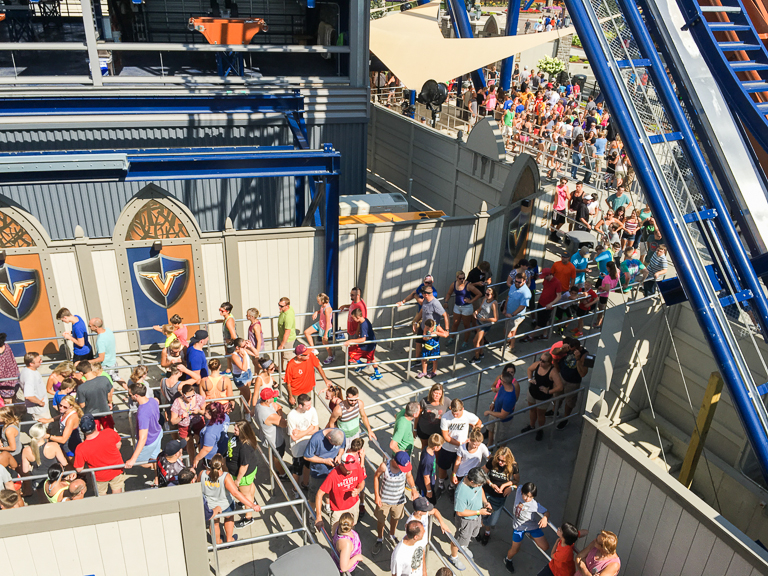 Even though we were in line immediately after park opening, it still took us 50 minutes to reach the front of the line. During this time, I kept seeing the people in the "Fast Lane" moving past us. The "Fast Lane" system is Cedar Point's version of the fast pass system. There's one big drawback to it though. It's not free and it's not cheap. For the day we were visiting, it was $105 per person, on top of our park admission! With the way this line was moving, I was really considering it.
That was, until I found the Cedar Point app! It showed that while Valravn had really long lines, the rest of the park wasn't too bad. 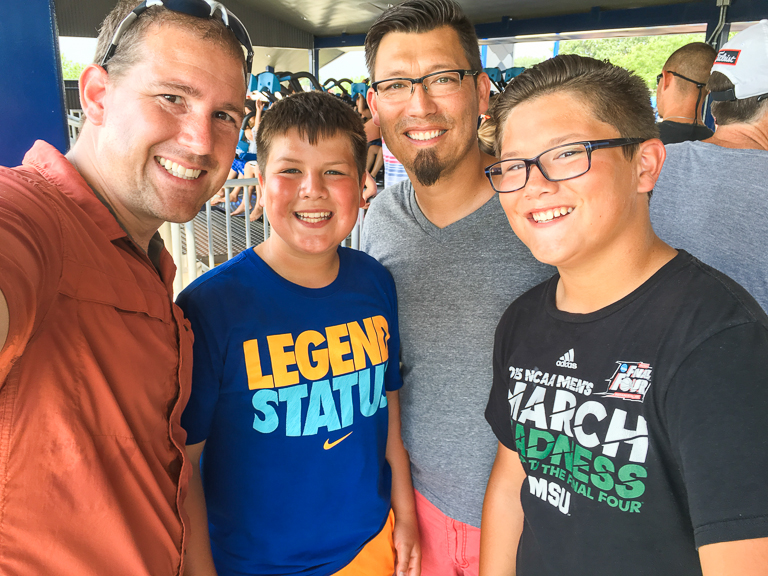 Finally at the front of the line, we requested and received the very front row! Perfect for a coaster like this where it suspends you over the drop hill before finally letting you go.
There were announcements and signs saying no cameras were allowed on the ride, so please enjoy the official Valravn Point of View video from Cedar Point.

Next up was the ride I came here for. When the Top Thrill Dragster opened in 2003, it was the tallest and fastest roller coaster on earth, climbing up to 420 feet in the air and reaching speeds of 120mph in only 3.8 seconds! It has since been surpassed, but this is the one I wanted to make sure I rode today.
And the line was less than 15 minutes for the front row! Kind of happy I didn't pull the trigger on that "Fast Lane" pass. 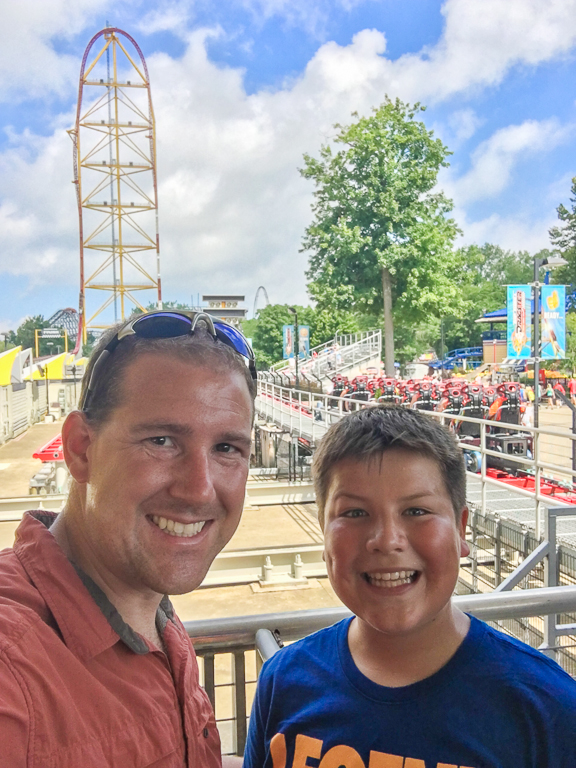 Austin and Donald opted for "not the front" and got on sooner than Ethan and I. They're excited. 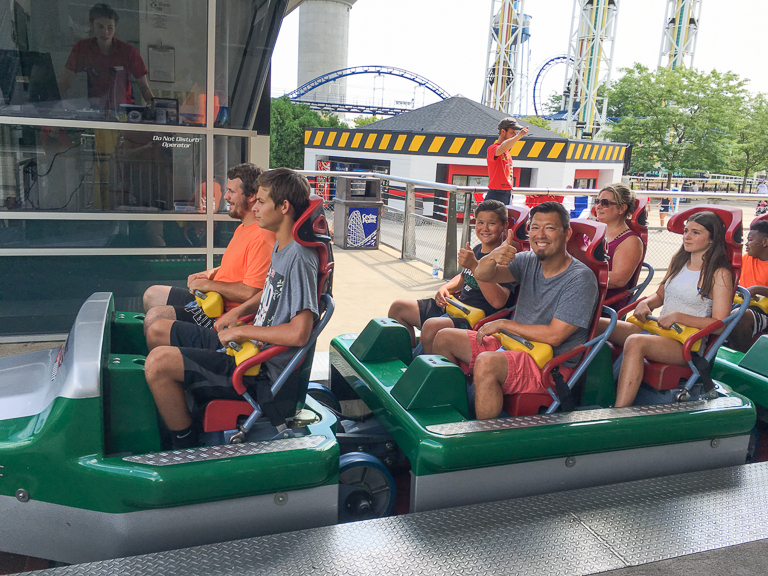 The time had come. Ethan and I loaded into the front row and the coaster moved towards the starting line. An automated voice continuously repeated "Hand's Down. Hand's Down." until everyone complied. A drag racing light tree counted down to green, at which point everyone's hands immediately shot back up into the air, and we were off!
The speed! From zero to 120 mph in 3.8 seconds! The acceleration is so incredible, moving faster and faster and thinking there's no way we could possibly keep accelerating, but then you do! By the time you hit the hill, you're almost immediately at the top! I only wish the drop was different. Instead of dropping into a straight freefall, the track does a 270 degree spin before finally leveling out. This ride is also super short, lasting only 30 seconds at most. Still though, that 30 seconds is intense, and makes this one of my favorite rides ever.
Top Thrill Dragster POV.

Ah, the Millennium Force. Opening in May of 2000, this coaster was the first in the world to top 300 feet, and was the fastest too, at 93 mph. After a 20 minute wait in line, we opted for the back of the coaster. 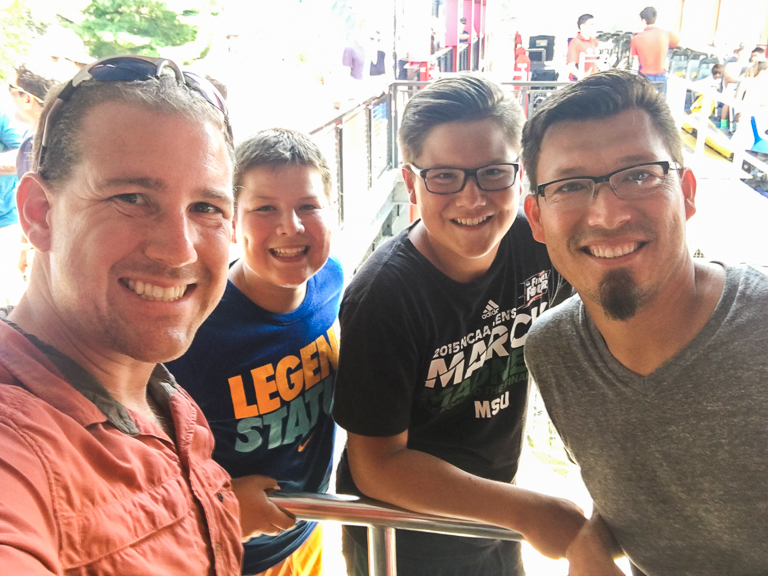 With the major coasters out of the way, it was time to try some of the other 16 coasters in the park. Rougarou was a short wait and fairly close by. Instead of riding, Donald opted to go order all of us lunch. 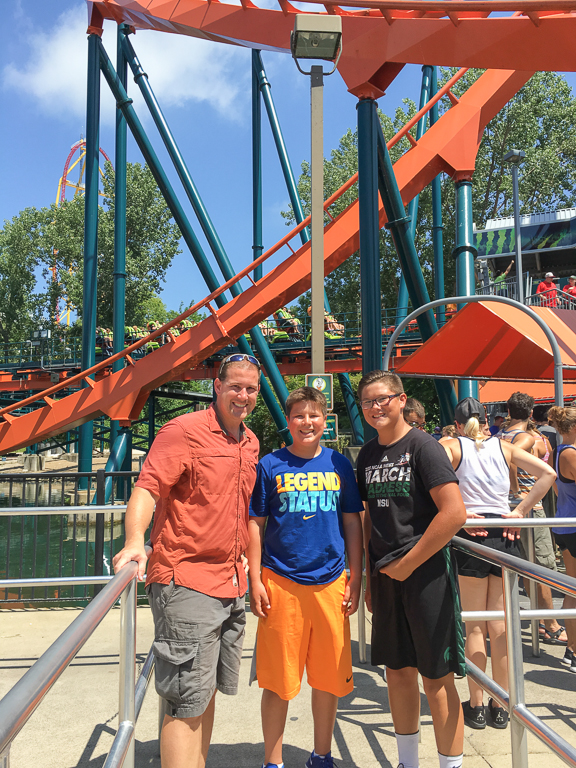 After lunch, the group wanted something tame. The Iron Dragon is a suspended coaster, which is advertised as a training coaster for younger thrill seekers. 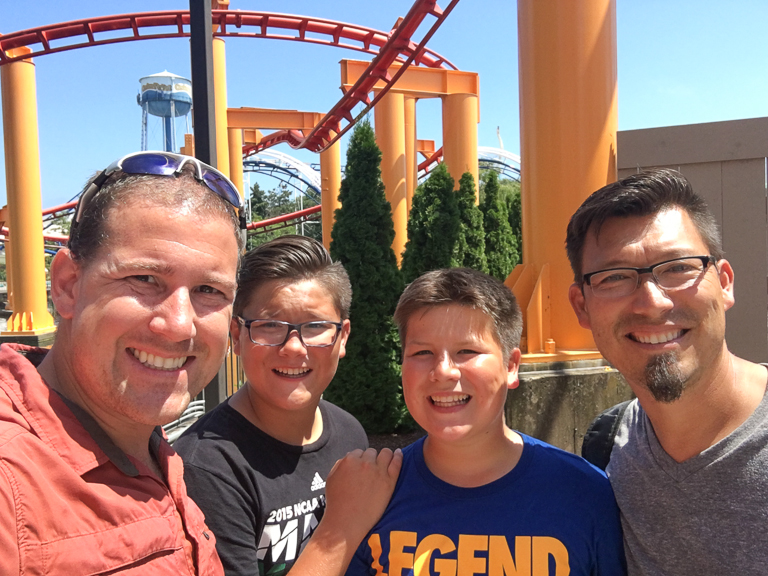 Along side the queue, there are ponds with lots of fish in them. The boys enjoyed throwing snacks to them and watching them start a frenzy for the food. As we were watching them, up swam a snake! Just as a fish went for the food we'd tossed in, the snake struck and grabbed a hold of the fish! For the next 2 minutes we watched as the snake kept trying to reposition the fish to swallow it, and the fish kept making desperate attempts to free itself. The last we saw of it was the snake swimming over to the bank and out of the water with the fish still in its mouth. 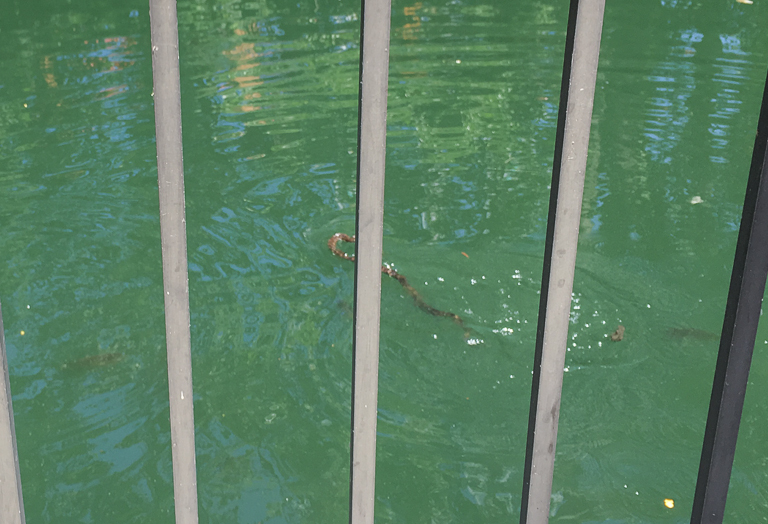 After finishing our ride, we noticed they were signing people up to test out the Virtual Reality system that you could wear while riding. 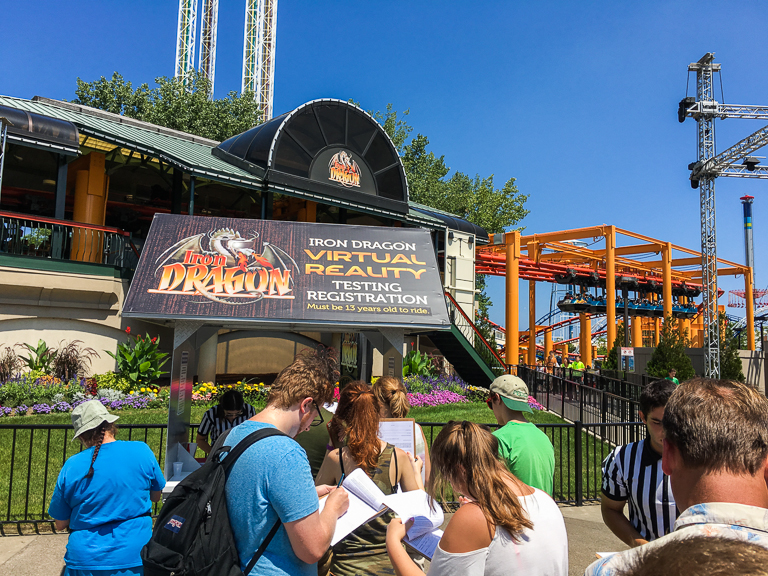 Checking out our waivers and giving us a return time for later in the day. 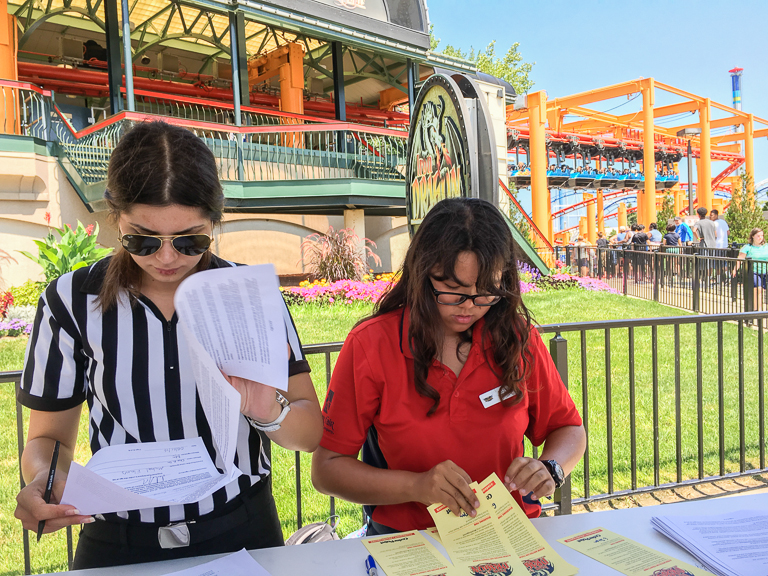 The next ride we wanted to go on was a coaster all the way at the front of the park. Donald suggested taking the train versus walking. 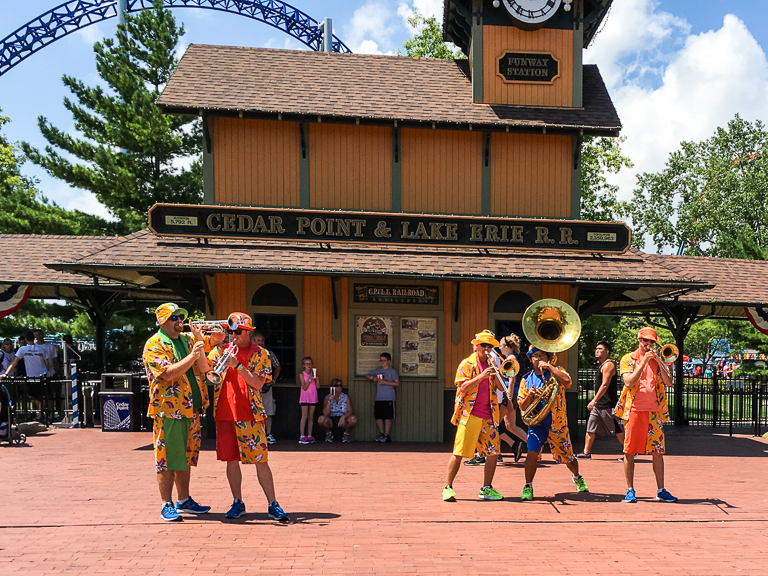 Not a thrill ride, but okay. 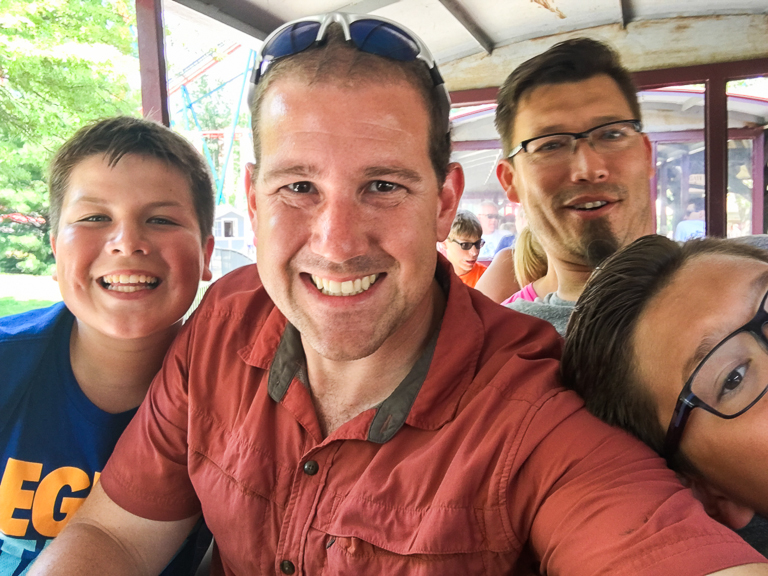 Here's a POV video of the train. You'll note that during this round-trip ride, at no point does it take you near the front of the park. Donald!!! Though he says it wasn't on purpose, I'm still not sure if he was really looking for some extra time for lunch to settle.

After that fiasco, we instead boarded the sky buckets, which actually do take you to the front of the park. 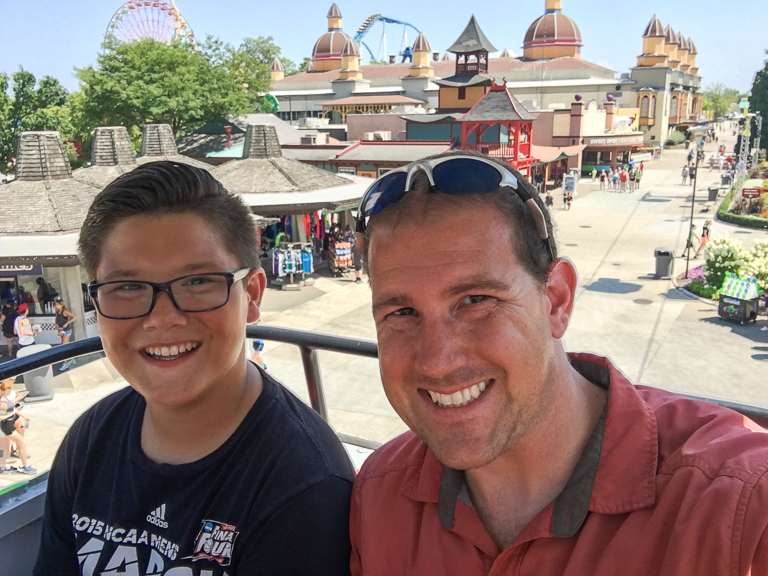 GateKeeper opened in May 2013 to very favorable reviews. Upon opening, it too set several records (detecting a theme here at Cedar Point?), including the highest inversion in the world (170 feet). 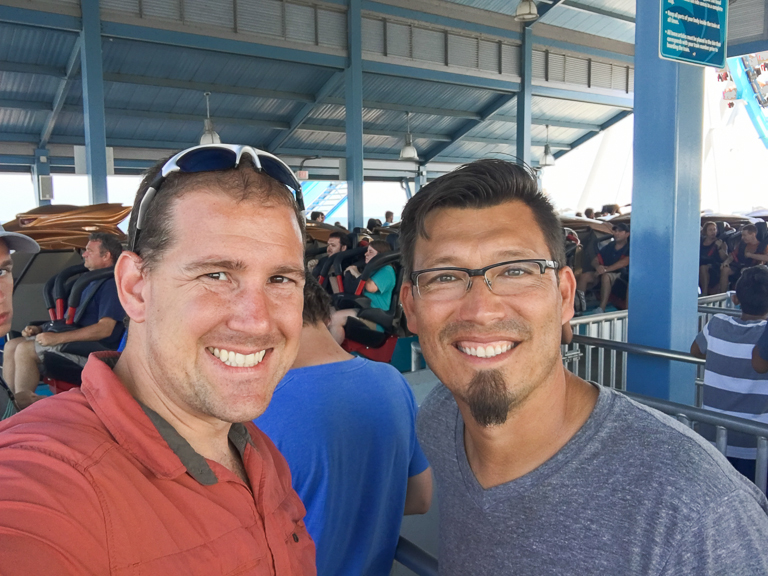 I'm glad I didn't know about that 170 foot inversion ahead of time, because it came as a great surprise when at the top of the lift hill, the cart inverted and pointed us at the ground! A really fun coaster!
GateKeeper POV

I don't know if it was the height or the spinning, but nothing we could do would get Donald to ride with us. The 301 foot tall tower takes riders up to the top and spins them around for 3 minutes. I thought the choice of theme music was odd. Hedwig's theme from Harry Potter?
Windseeker POV

While we were riding, Donald was enjoying the All Wheels Extreme stunt show. We caught the end of it, and it looked pretty fun! Especially the trampolines (which don't have wheels, so I don't get the 'All Wheels' theme). 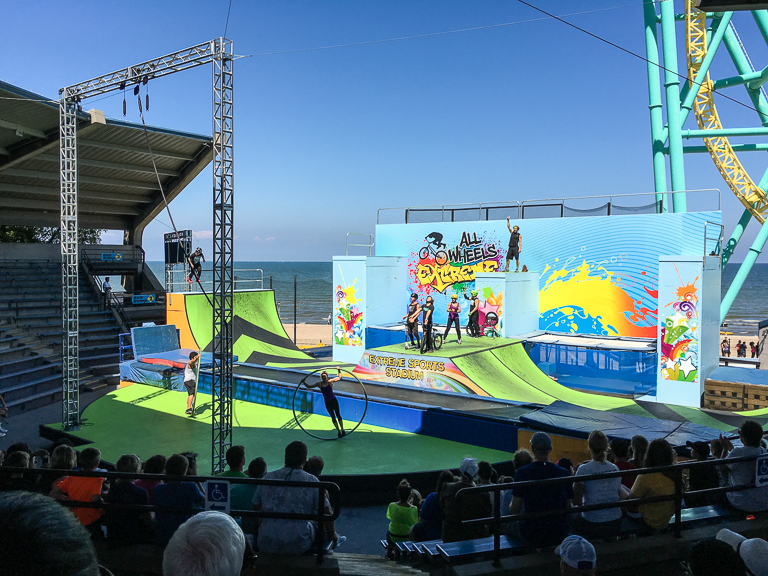 Raptor was next. When it opened in 1994 it was the tallest, fastest, and longest inverted coaster in the world. With short lines, we'd end up riding it twice! 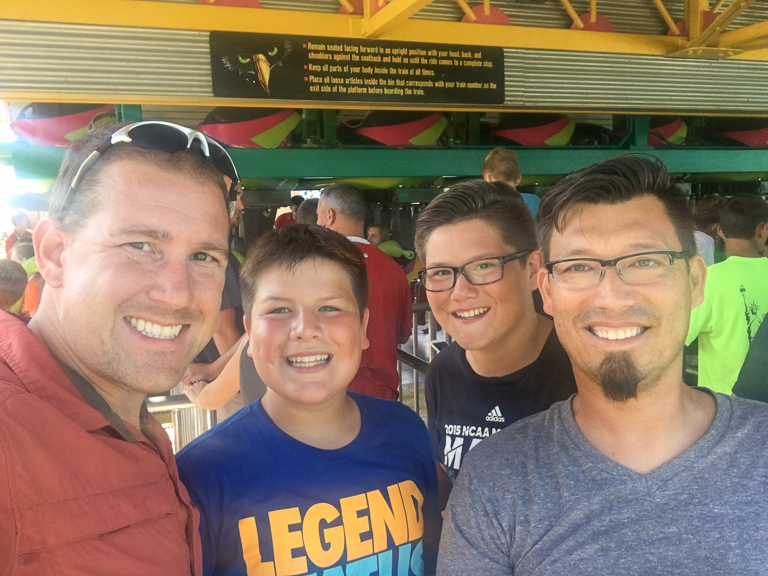 There are two power towers here. And both are a lot of fun! One lifts you up and then drops you 240 feet, the other starts from the ground and shoots you up 240 feet. 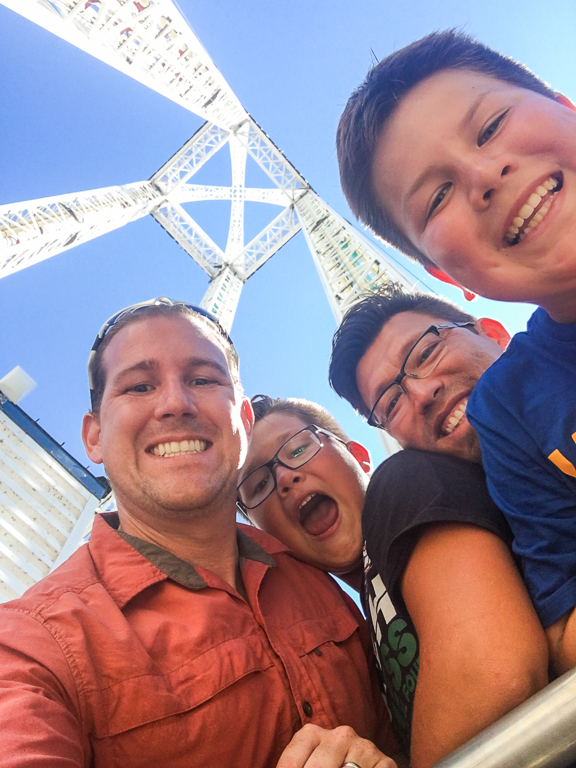 I can't remember the last time I had Dippin Dots. Yum! 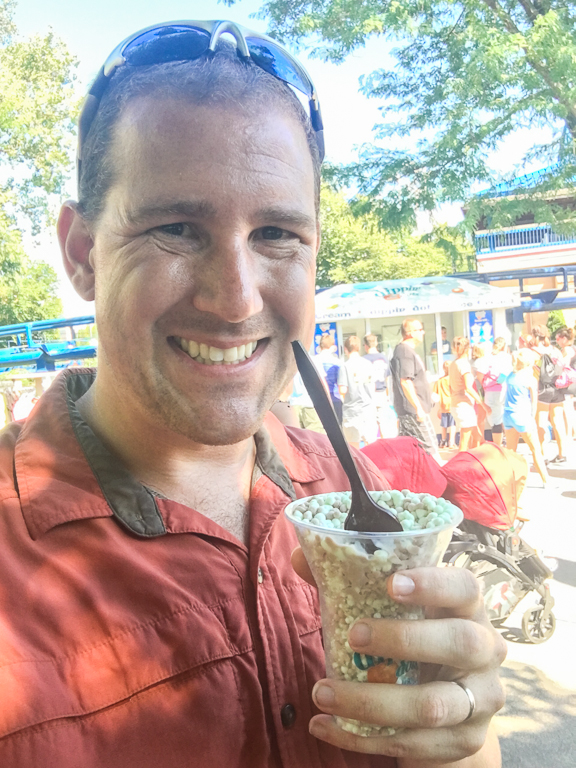 Magnum XL-200 was our next coaster and it was the tallest, fastest, steepest coaster in the world when it opened in 1989. Both Donald and Austin opted out. Perhaps they knew something we didn't. It was a little rough.

Gemini opened in 1978. It features two trains that are released at the same time and race beside each other throughout the ride. Donald and I sat in the front row, and I was able to high-five almost the entire train as it went beside us! 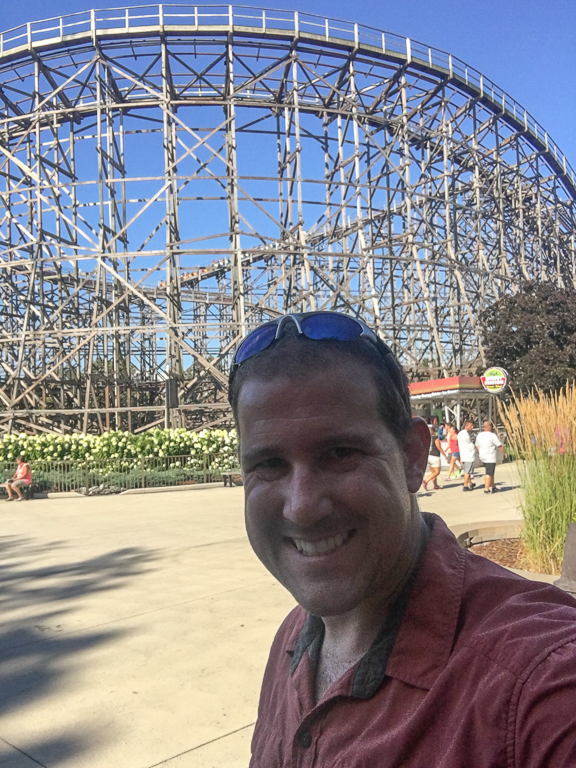 Skyhawk is a giant swing that takes you 125 feet in the air! 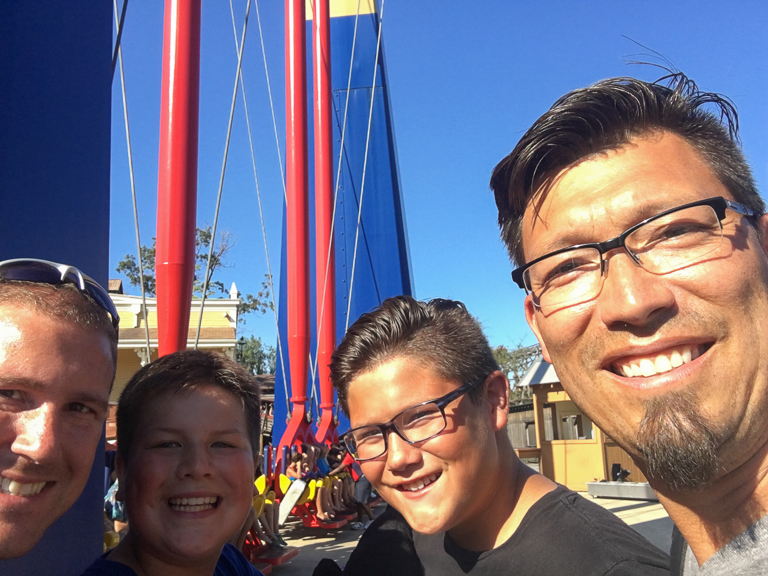 At 6:25pm it was time for us to return to ride Iron Dragon in VR. This could be good or this could be bad, depending on how well the VR syncs up with the ride.
After everyone got their headsets on, the ride started with us in a castle courtyard, riding in the back of a horse-drawn cart. Shortly afterwards a dragon appears and picks up the cart and flies us around. Not just that, but the castle is also under attack by goblins, ogres, and other dragons! We fly and swoop around while arrows are being shot at us, and things try to attack us. In all, it was a meh kind of experience. Maybe it's a limitation of the technology, but I felt the whole thing just moved too slow.
And VR apparently isn't for everybody. Donald had to take his headset off during the ride and after that, he was done with coasters for the day. 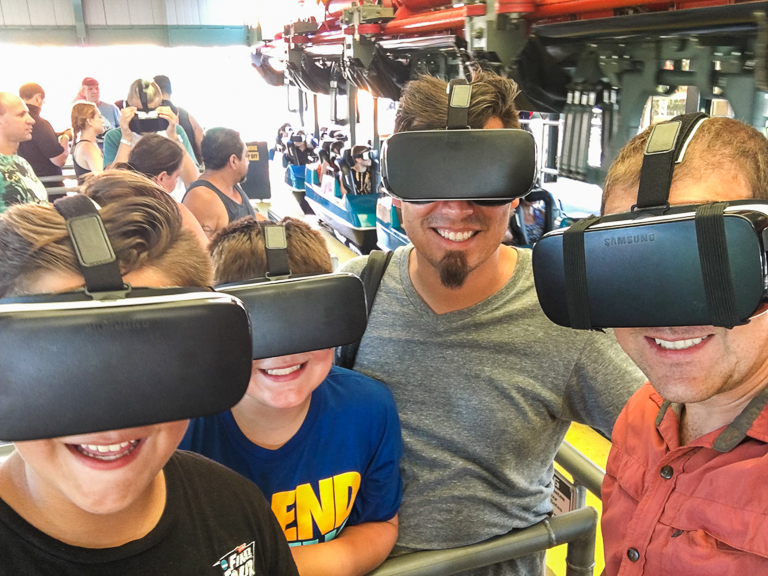 Maverick opened in 2007. It's one of the last big coasters left for us to do today, so we had to ride it, but boy did it have an insanely long line. I think we waited 80 minutes for this one. It was fun, but not at all worth that kind of wait. 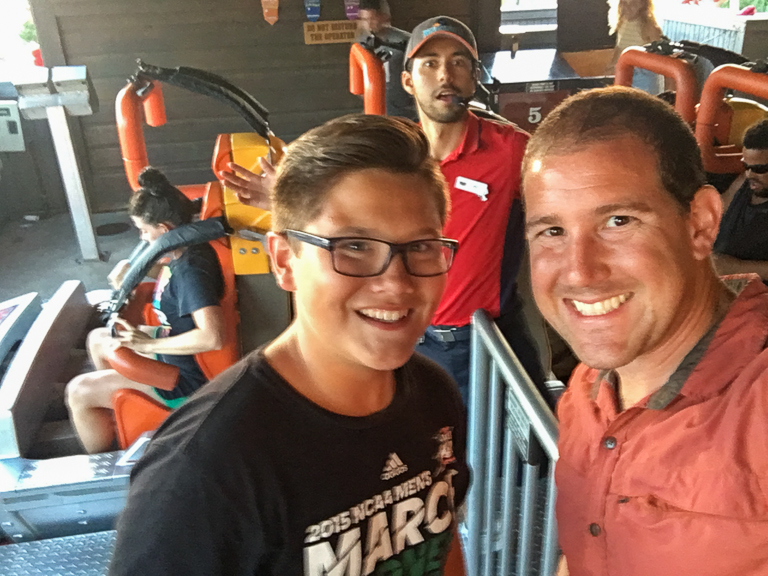 After Maverick, I had to have another ride on the Top Thrill Dragster. It was just as intense on the 2nd ride as the first.

Corkscrew opened in 1976 and was the first in the world with 3 inversions.

After Corkscrew, we went back to the front of the park and took another trip on GateKeeper. The park closes at 11pm tonight but at 10:30pm, GateKeeper took its last run. We were told it was because of the fireworks.

Guess we'll have to pick another coaster to close out our night with. Located right near the entrance, Raptor had a ridiculously short line. Ethan, Austin, and I hopped in line around 10:40pm and went directly to the front row. As we were cresting the lift hill, we could see the fireworks light up the sky. Really a cool sight to see.
When we returned to the station, there was hardly anyone else in line. There was someone waiting for the front row, but no-one waiting for the back rows. We asked if we could move back to one of those rows and got a thumbs up! After the next ride they announced that if there was no-one waiting to ride in your row, you could stay on and keep riding! They kept the Raptor running until 15 minutes after park closing, and we were able to get in 5 rides total without having to go back through the queue!

At 11:15pm, they announced that they were closing the ride down and that the park was closed. The four of us left the park and I drove us all home while the rest of the car fell asleep.

After a bit of a slow start, we were able to do 25 Thrill rides in 13 hours! It was a really awesome day!