Welcome to the 2017 Pasadena Chalk Festival! It's the 25th anniversary of the festival and it's the 3rd year for Ruston and I to participate. The first year we made a Ducktales mural. The second year was The Iron Giant. What to do this year though... It's can't be too detailed. We both like Disney. How about a retro Disneyland poster? There were a few good options, but when I told Ruston we could dress like Jungle Cruise skippers and tell corny jokes, I think that sealed the deal. Jungle Cruise it is!
After a practice session in my driveway a few weeks before, the day was finally here to do it for real! 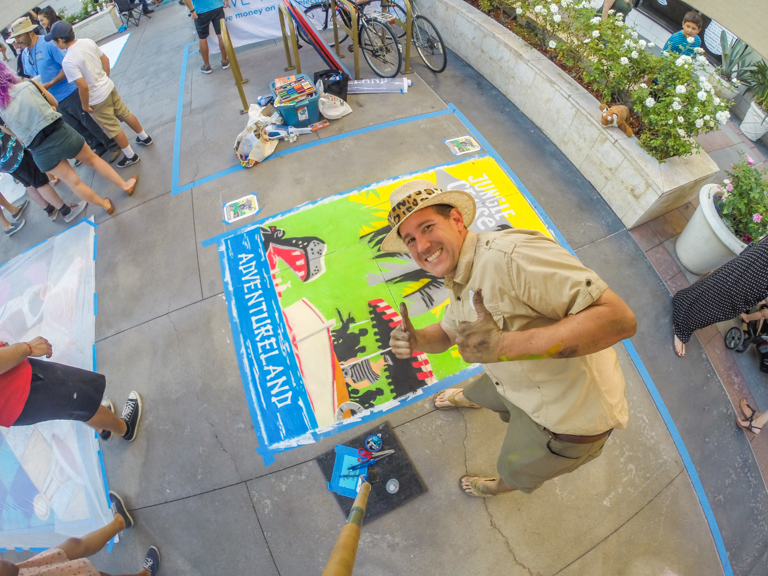 Ruston and I both arrived at the Paseo Colorado around 8am. I checked in, getting our lanyards designating us as artists, turned in my painting for the silent auction, and grabbed our goodie bag with chalk and t-shirts. 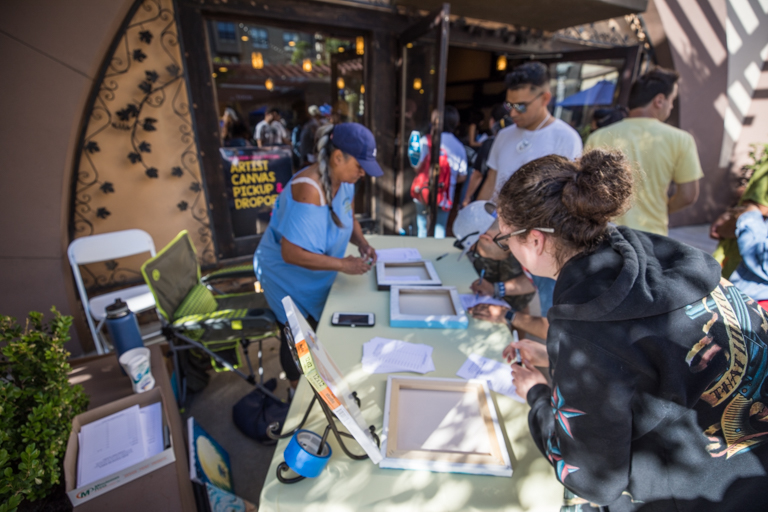 There was a breakfast spread for all the artists too. 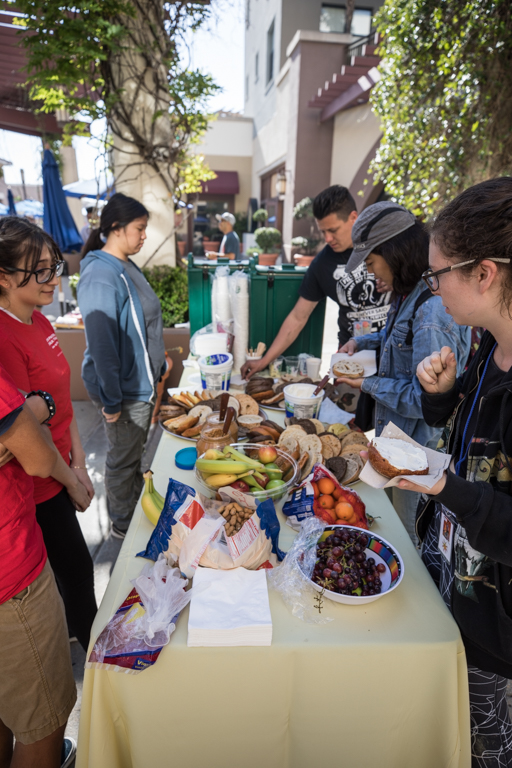 Our first year, I didn't know how important it was putting down a base coat. Our second year we fixed that and it made everything so much easier. No wonder all the top artists here put one down. 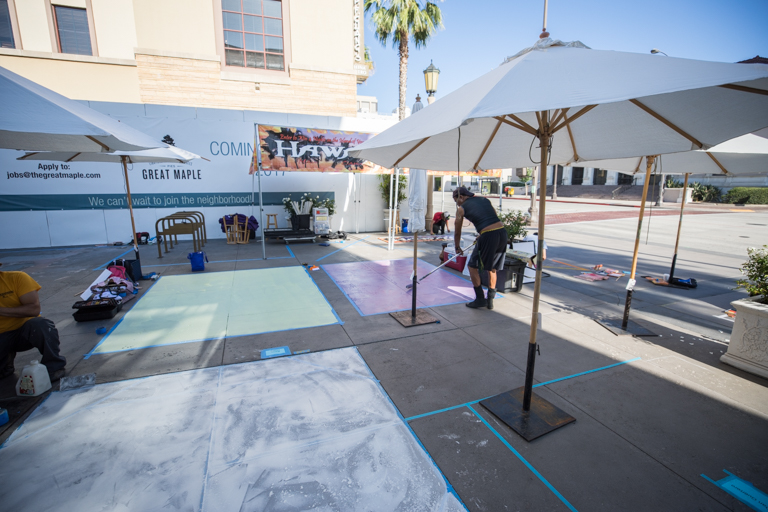 I asked about this one. He's formulated his own base coat and applies it with a trowel. I bet it smooths out the bumps and fills the cracks even better than what we're doing. 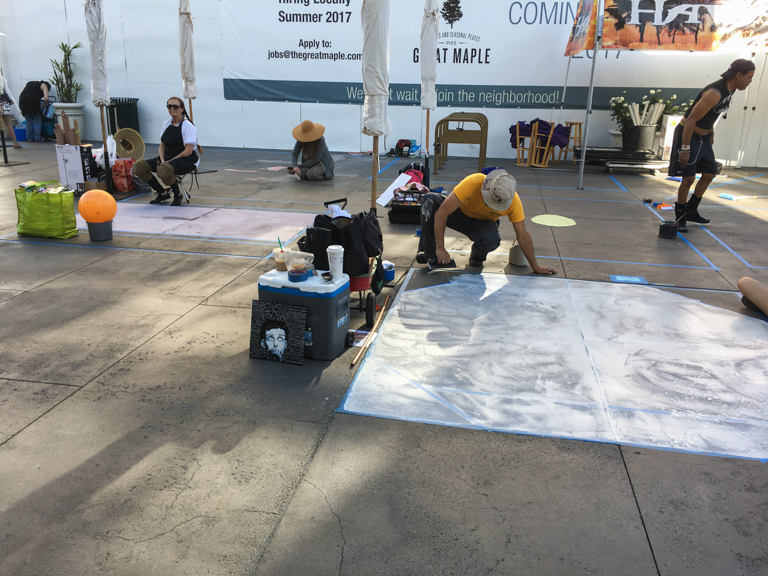 After measuring and taping off our section, Ruston started on applying our base coat. 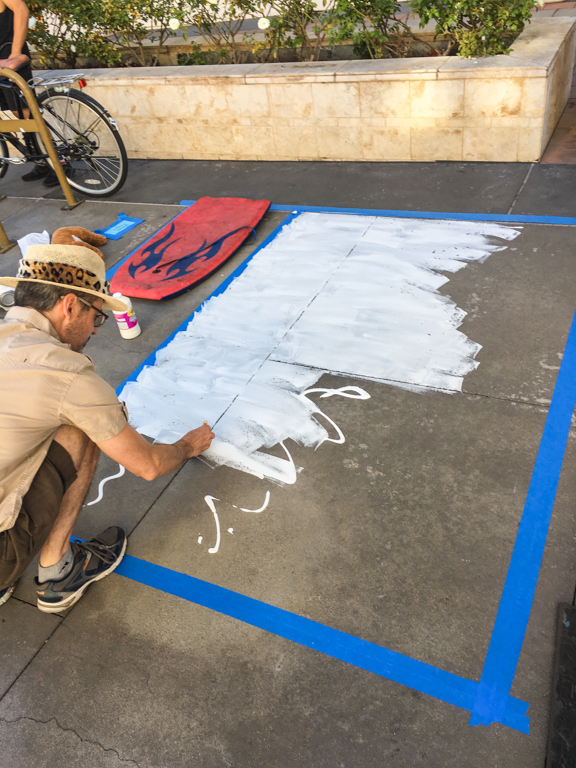 While I got the Go-Pro set up. Stay tuned for a time-lapse video of the whole thing. 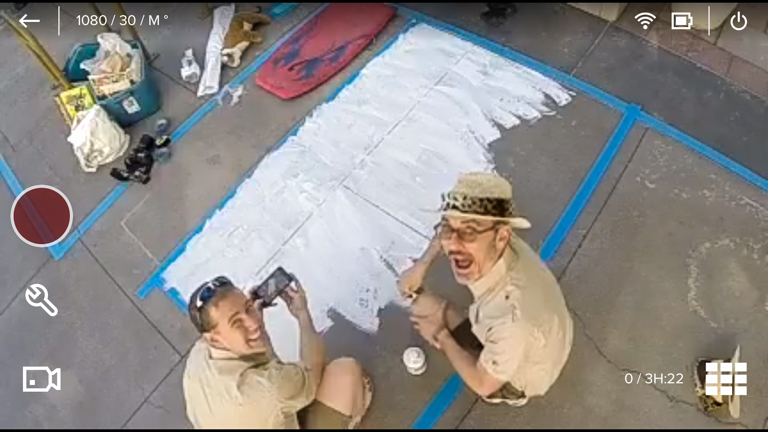 Here's what we're doing. Staples will print 3'x4' posters for $7.50. Put 4 of those together and we've got an 6'x8' poster! We covered the back with black chalk to make our own "carbon paper".
I really liked our coordinating Jungle Skipper outfits. Hat with a leopard band, khaki shirt and shorts, plus a Disneyland name badge. I think we look the part. 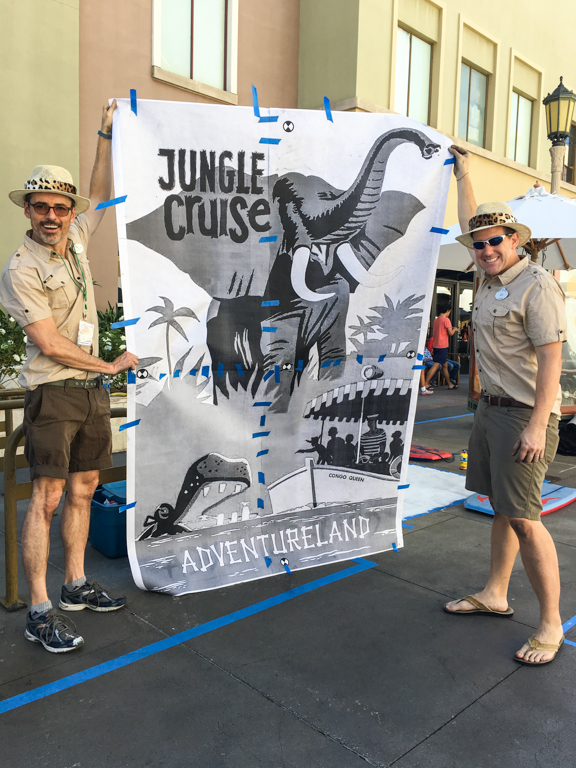 Ruston and I traced the outline of everything on the front. 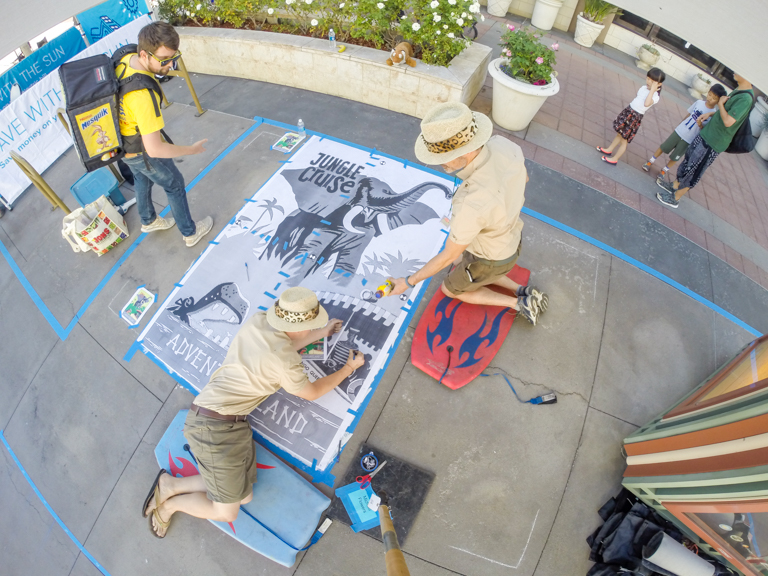 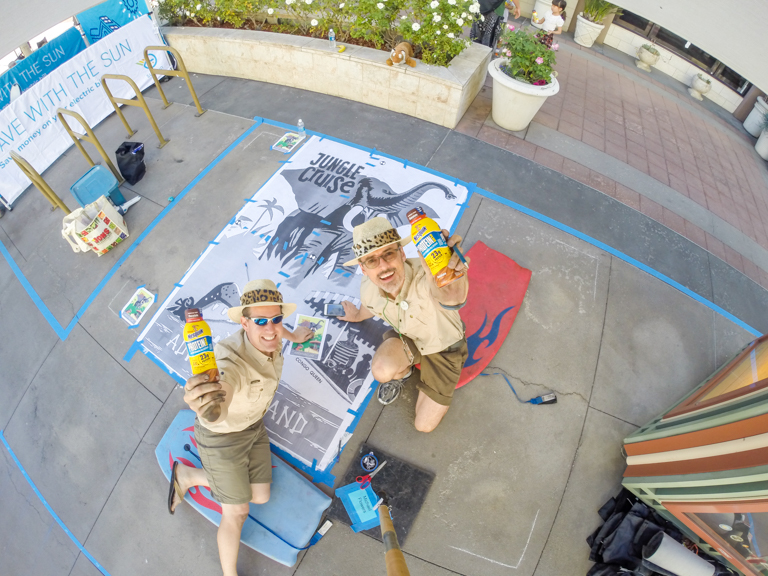 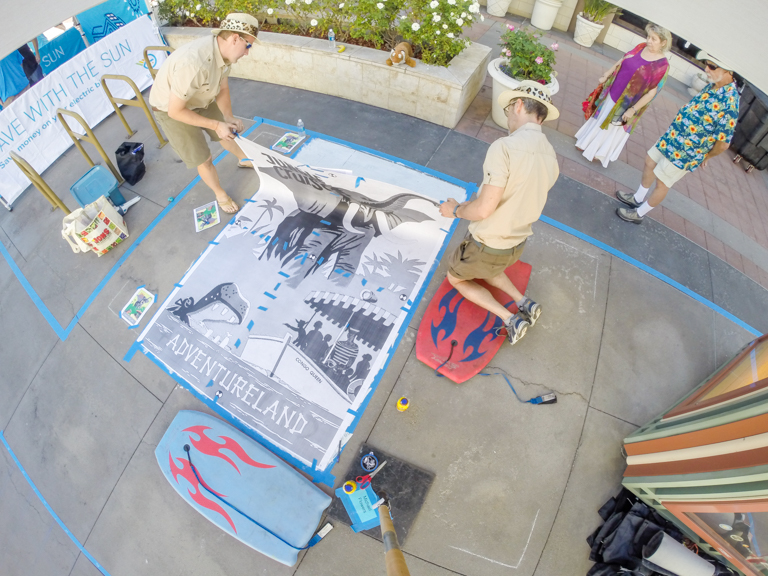 Success! Now just to fill it all in! 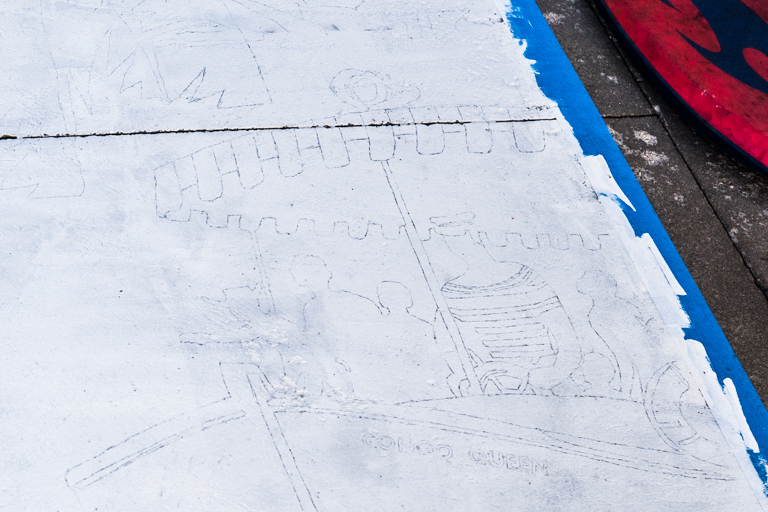 While we signed up as a team, Ruston had something come up that on Saturday that he just could not miss. Now that the pattern is down, I'm on my own. Let's get to work! 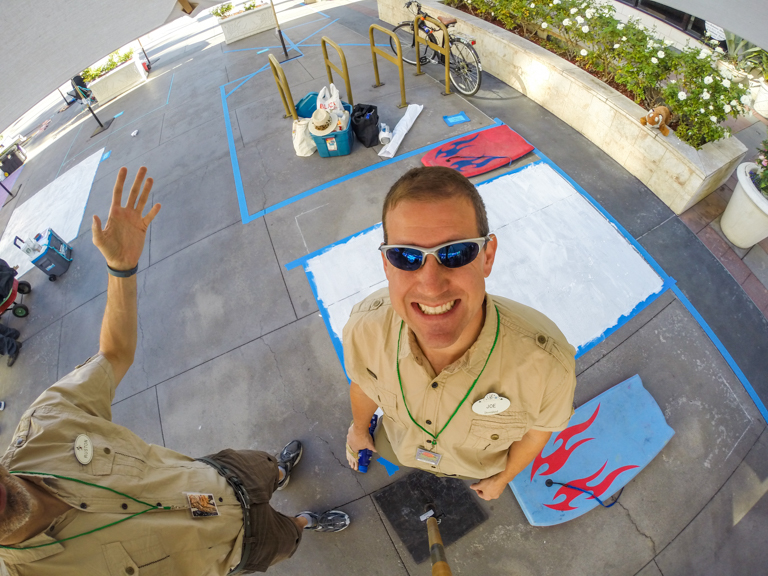 One of my favorite things to do in the morning was giving kids high-fives. 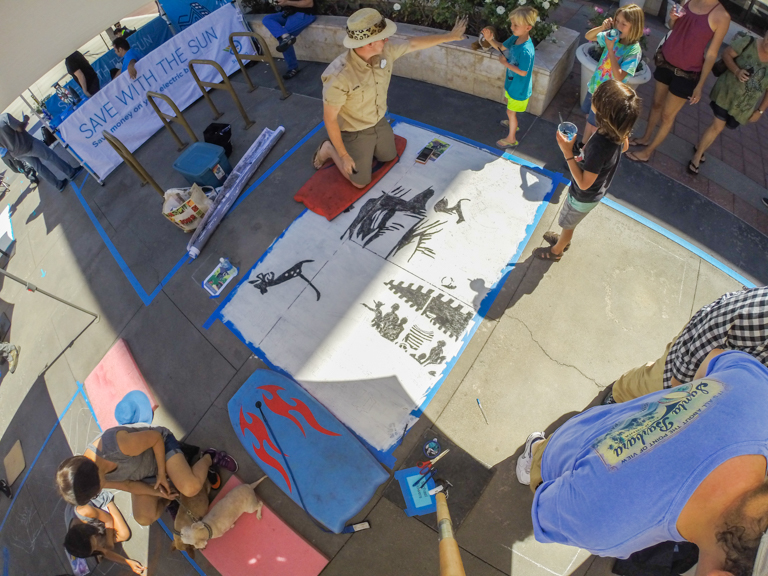 My hands might be just a little dirty. Each of them got to take some of the festival home with them. 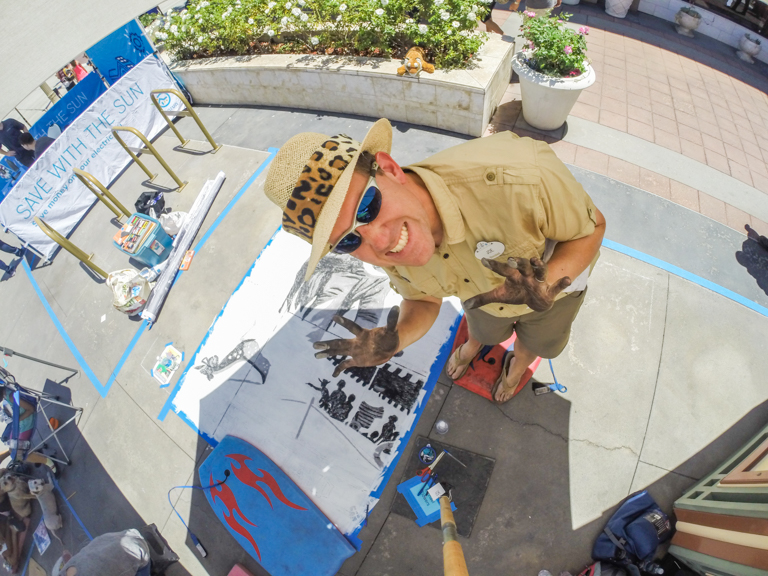 It's one of my co-workers Debbie! I love seeing people I know! 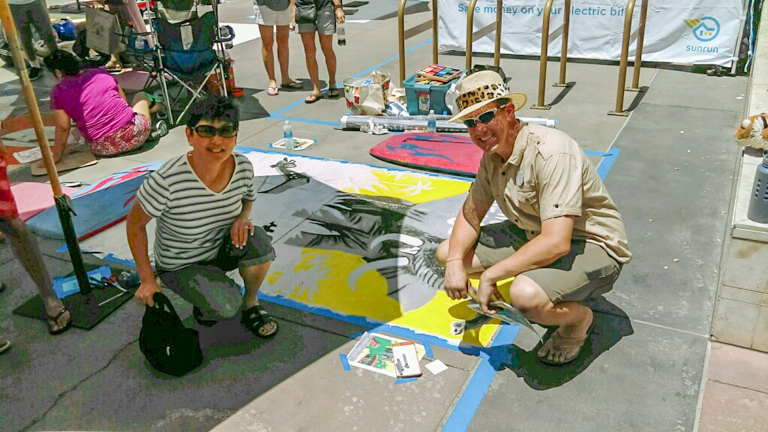 Watching over me the whole time was this 500 pound Bengal Tiger. He was a big part of my Jungle Cruise spiel.
It would usually start with someone asking "Do you work for Disneyland?"
Joe - No, I don't work for Disneyland, but the tiger does. That there is a 500 pound man-eating tiger. You ladies are safe. Sir, you best be careful. But seriously, you don't have to worry about the tiger. He's stuffed. The snake is real though. Watch out for him. 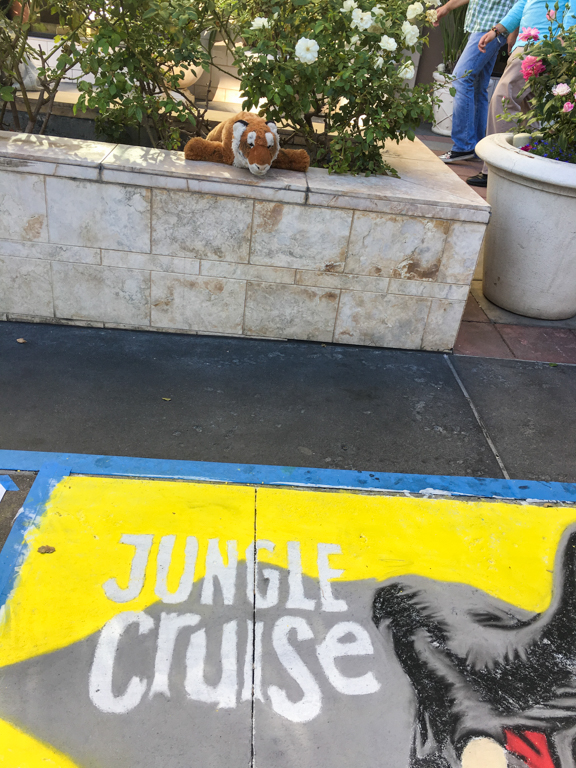 Making progress. I'm doing the colors one by one. Once the first coat is down, I'll go back over them and fill in the splotchy patches. 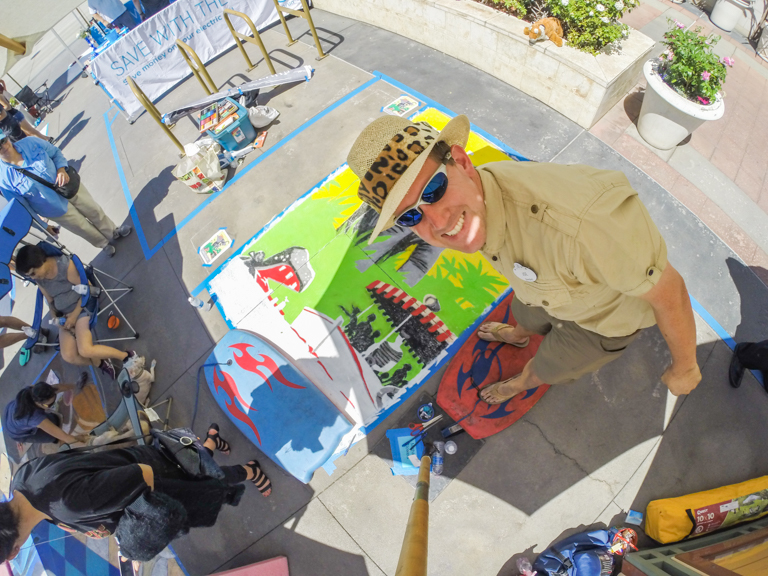 Adding Adventureland across the bottom. 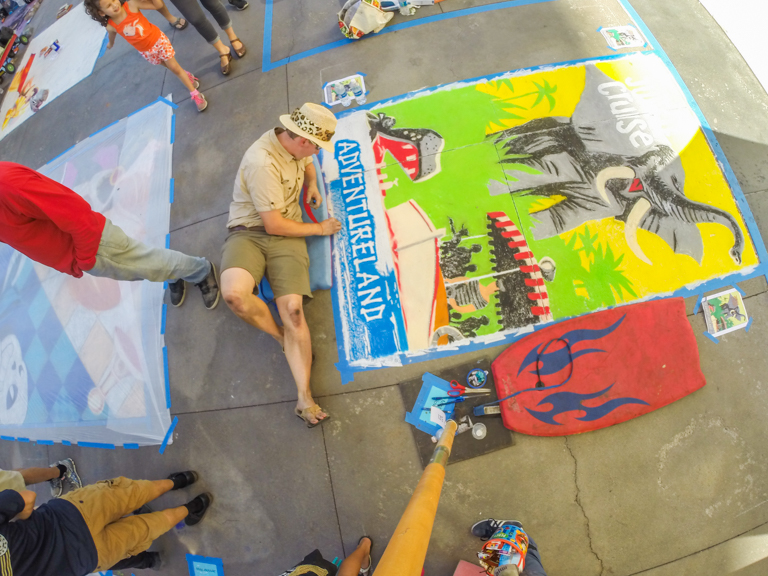 Telling some jokes to these girls who decided to hang out for a little while.
Why is it so hard to eat a zebra? White meat, dark meat, white meat, dark meat.
Why do elephants have flat feet? From jumping out of trees.
One of them did seem a little concerned when I told them the tiger was stuffed but the snake was real. The other started looking all over the bushes for it.

Later I apologized to my nearby chalk artists for them hearing all the same jokes over and over. But then again, that's probably just like the Jungle Cruise. 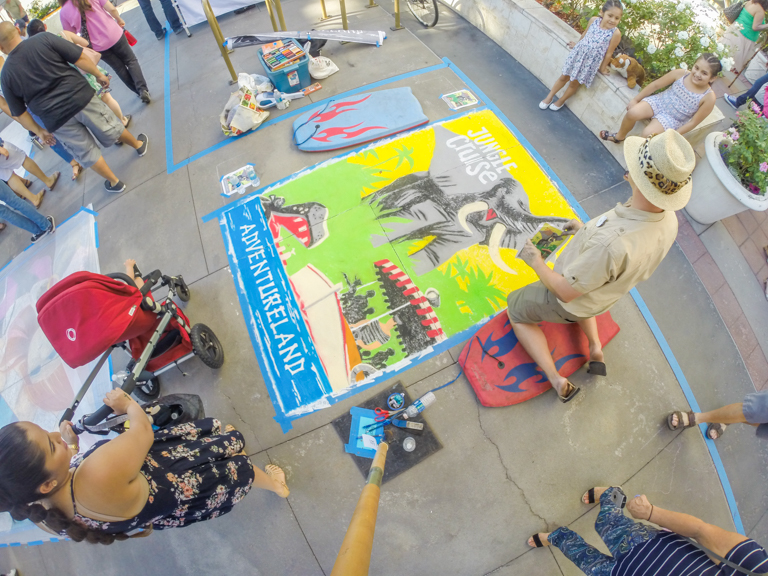 Another visitor! This time it's Joe! 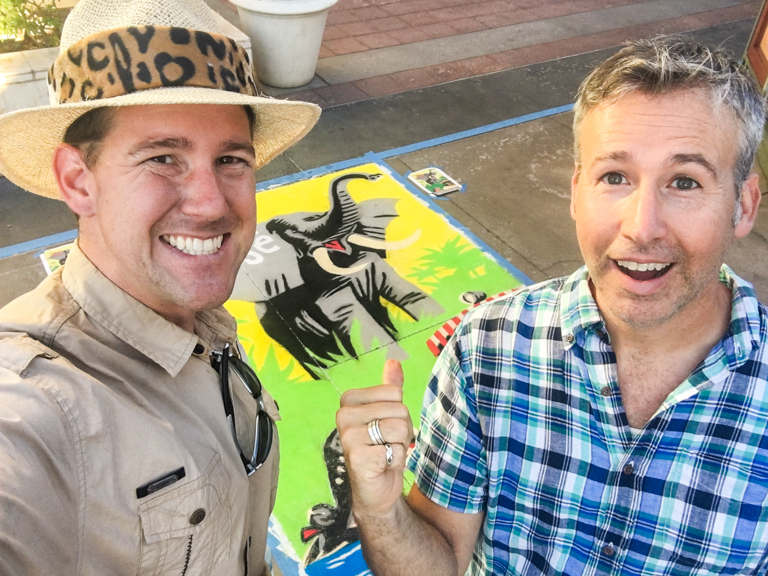 11 hours after starting, done for the day! Still smiling too. Only a little bit more to go tomorrow! 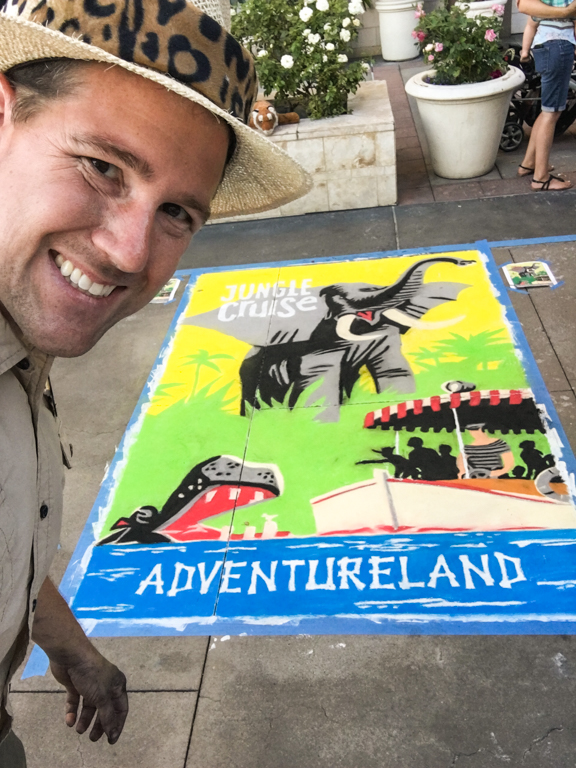 Safe for the night. Covered in plastic, cones keeping people out.
A few people asked why a bunch of the murals were getting covered. You'd think overnight after people leave that the murals would be respected. But in the past we had footprints and tire tracks going through our mural the next morning. Thus the plastic keeping things protected. I learned that again this year, someone rode their bike through Animation Alley, running over murals and leaving tire tread tracks. 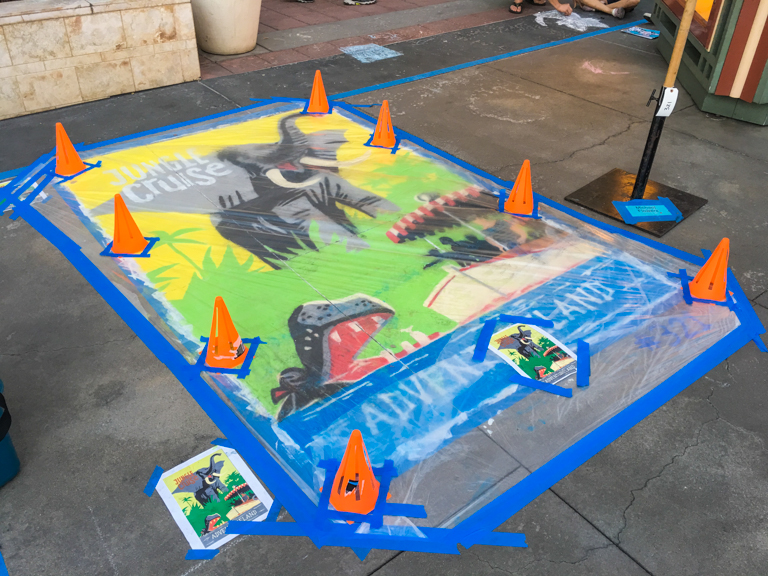 We'll see how it fares overnight!