Entry into the Pasadena Chalk Festival is free after your first year. The only thing the organizers request is a 12"x12" painting that can be auctioned off. All the proceeds go to the Light Bringer Project which brings art to the children of Pasadena and the greater Los Angeles area.

Since it was my year to choose the mural, it was also my year to provide the painting. Obviously we're doing a rectangular poster for our mural. I wanted the painting to match our mural, so I had to figure out a way to make the rectangular poster fit on a square canvas. In the end, I moved Adventureland to the side and tried to made it more wood tones.
There's one other change I made to the poster. The classic poster calls it the Jungle River. I've changed it to what's it's more commonly known as, Jungle Cruise. 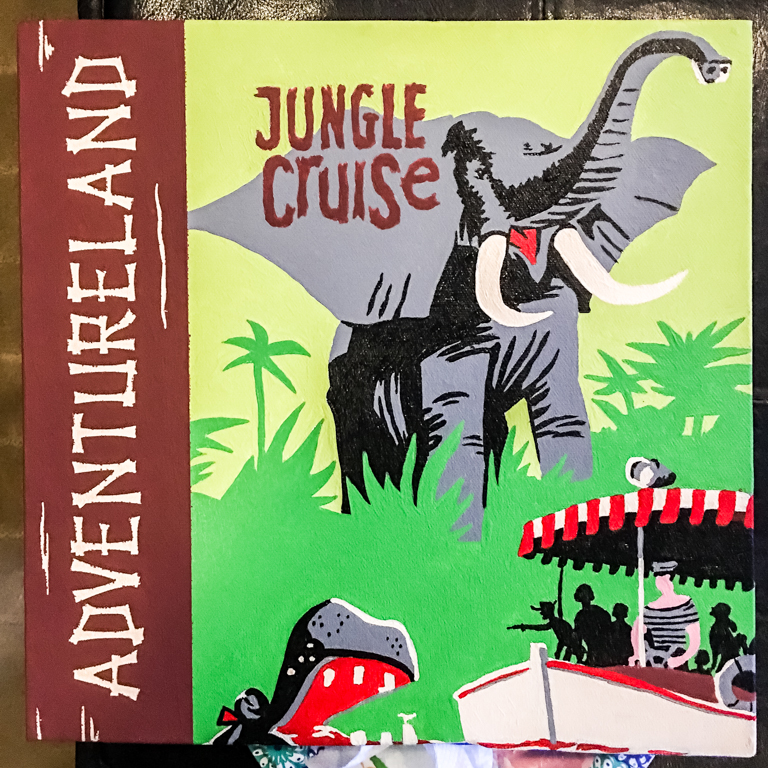 Since I'm using a think 1" canvas, I wanted to wrap something around the sides. On one side, I wrote Disneyland. 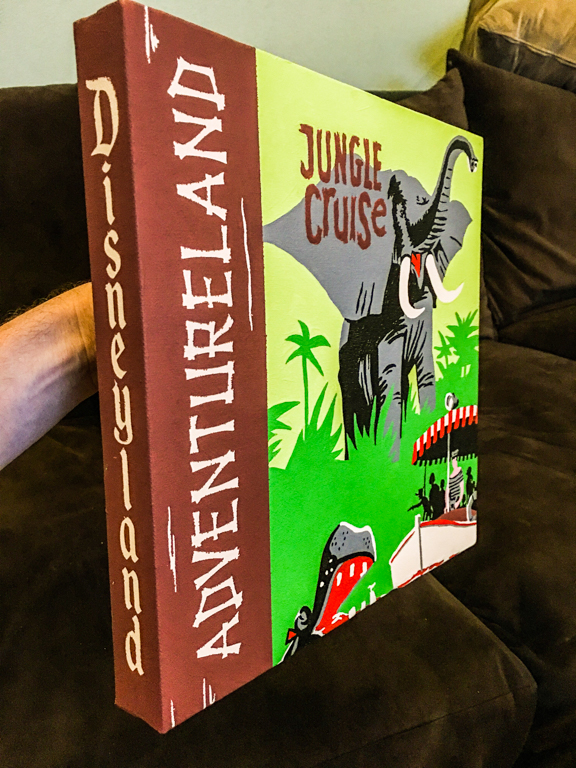 On the other side, since the poster cut off, I had to imagine what might exist over there. I chose to imagine Walt and Mickey. Walt with his hand raised similar to the Partners statue in the middle of the hub on Main Street. Mickey standing beside him.
Not pictured but on the back of the canvas I wrote "The Back Side", a tribute to the popular Jungle Cruise joke about The Backside of Water. I was surprise, while I was doing my chalk art on Saturday one person even mentioned that they picked up my painting, saw it on the back and thought it was funny. 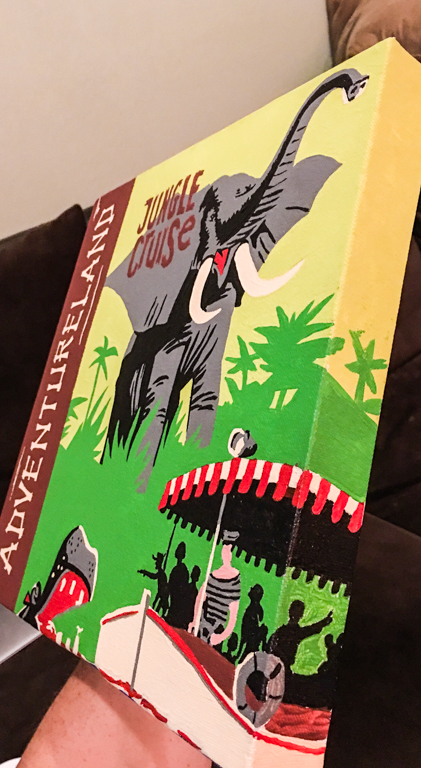 Alli, where's Daddy's painting? Yep! Let's see how much it sells for! But first, we'll look at a few others. 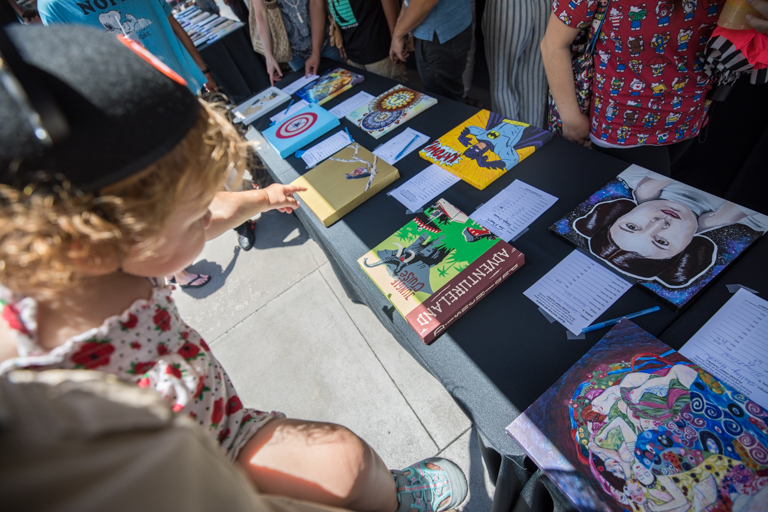 All the paintings are placed on tables near the main stage with bidding sheets underneath. Many artists make a painting that relates to the mural they're working on. 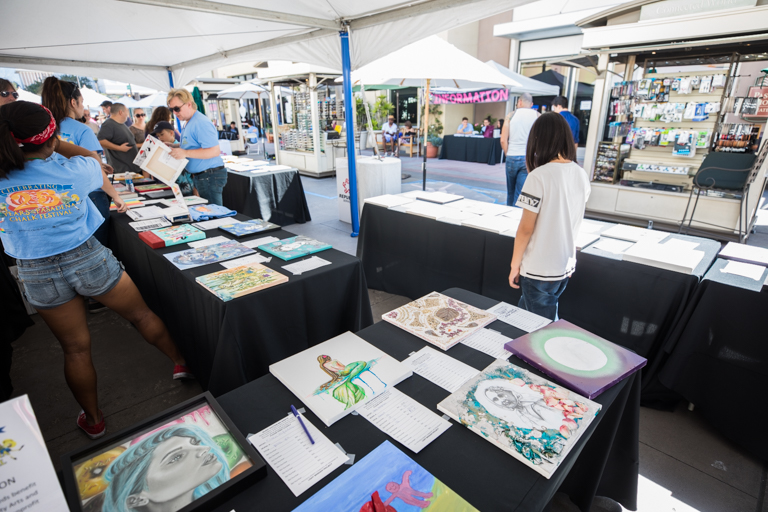 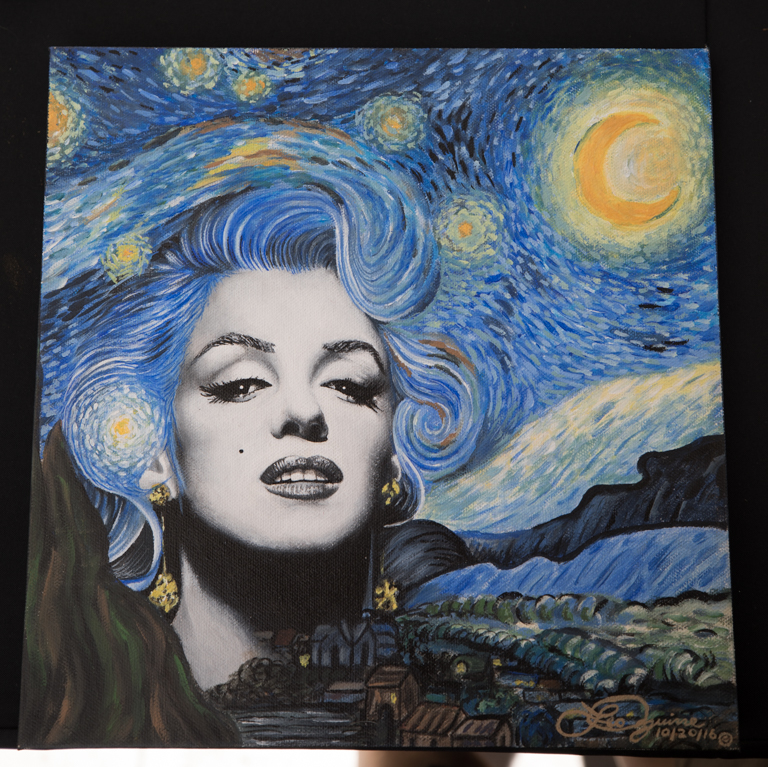 Charlotte Scovill's Alice recreation was a really cool use of yarn. 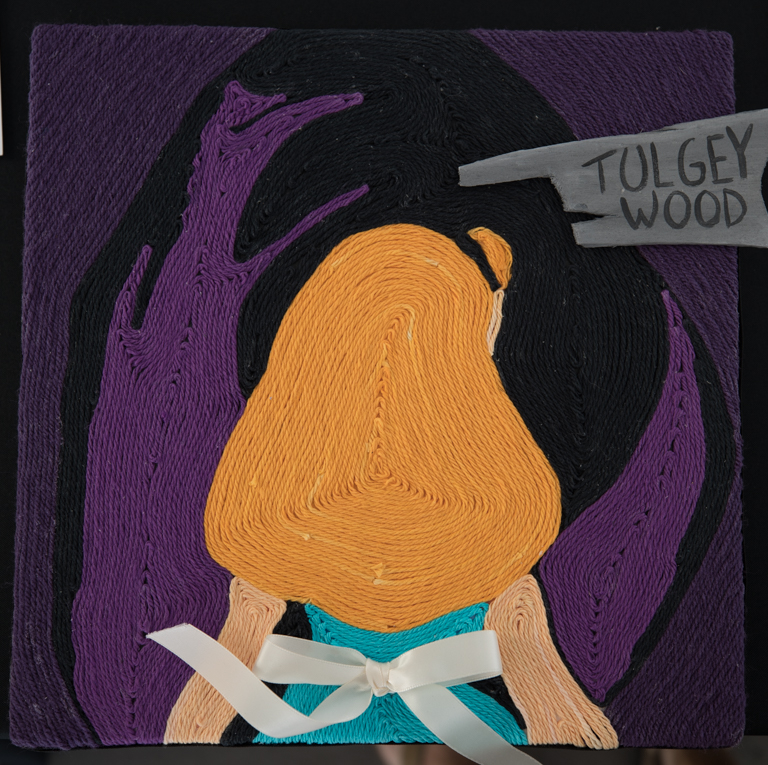 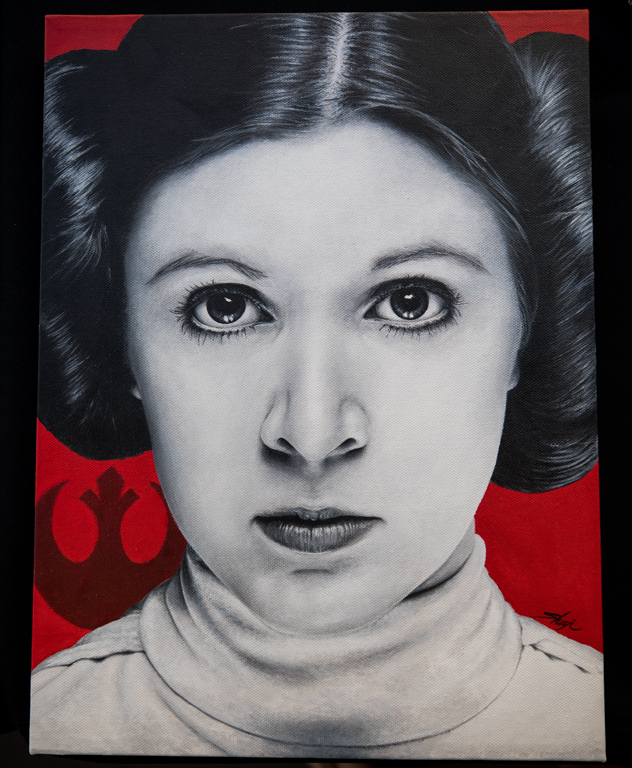 Yes, it's paint. Ruston stuck around for the end of the auction. I believe he said this one sold for $425. 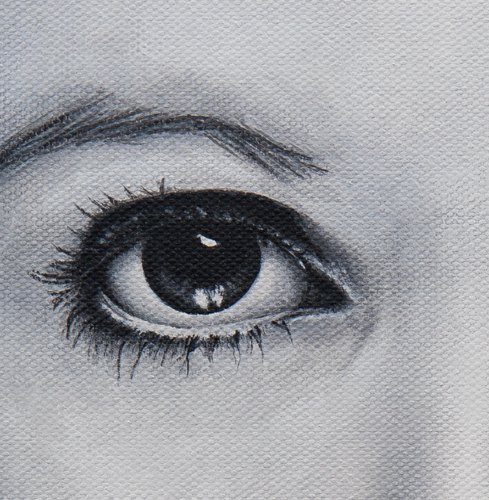 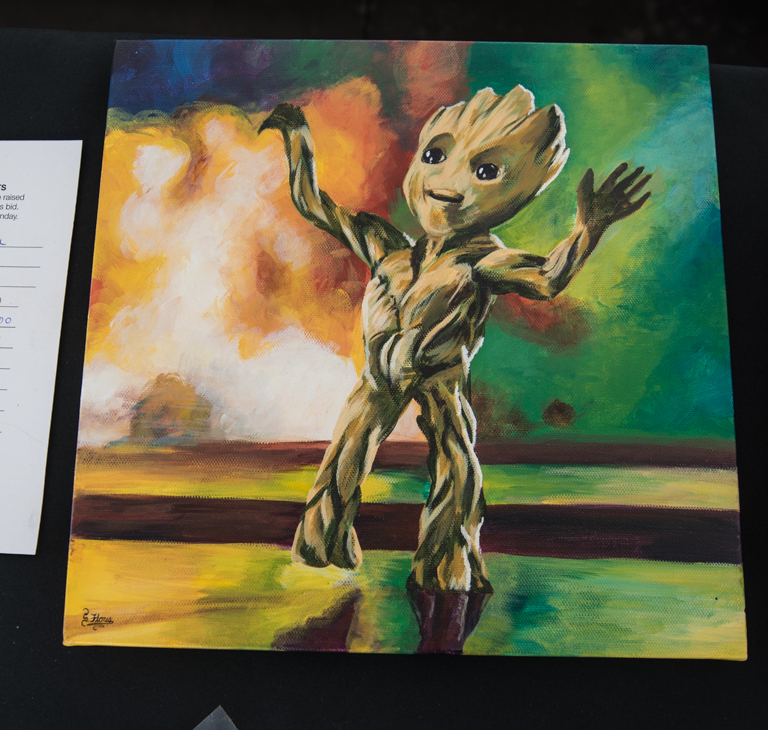 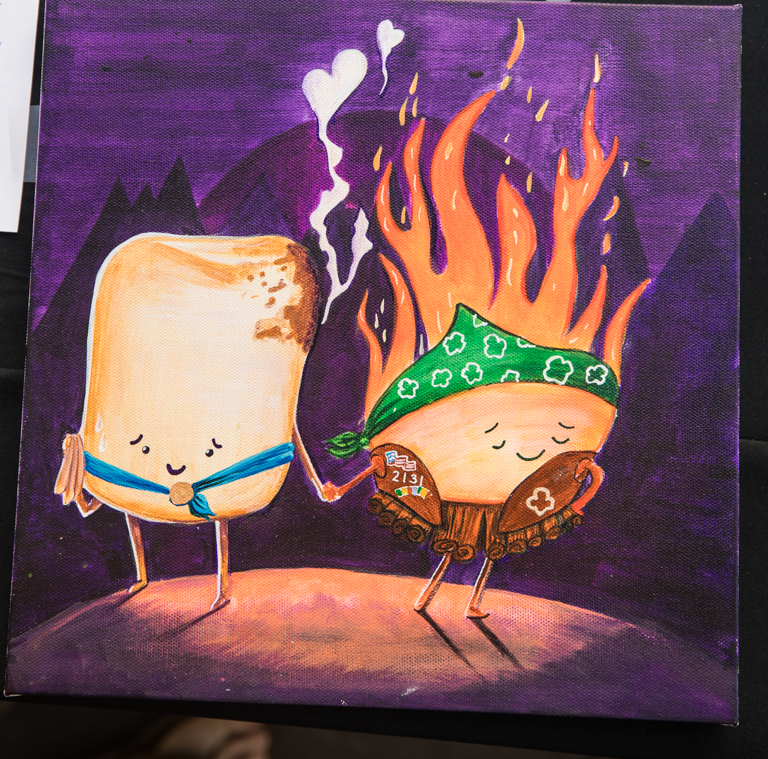 The lettering on this one was beautiful. 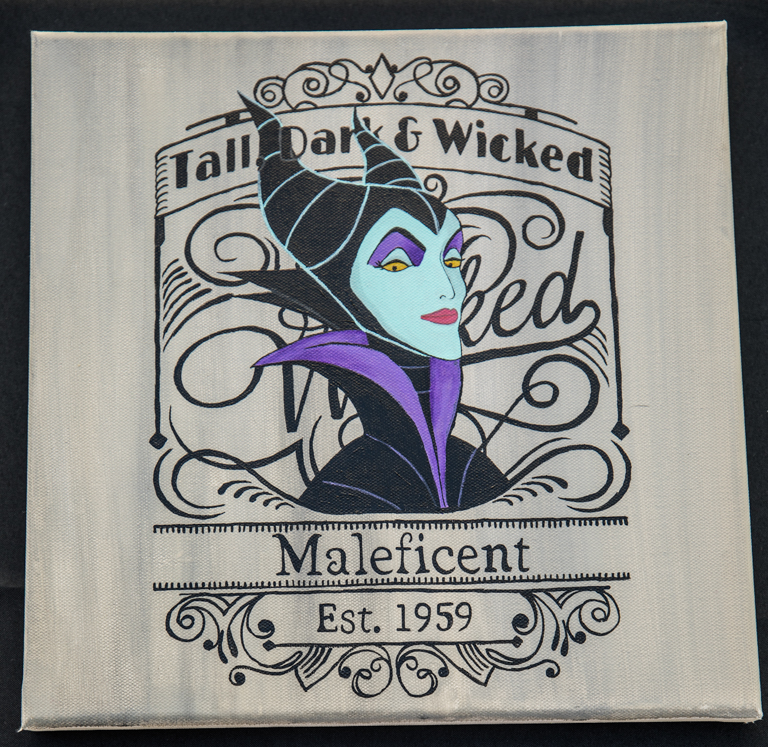 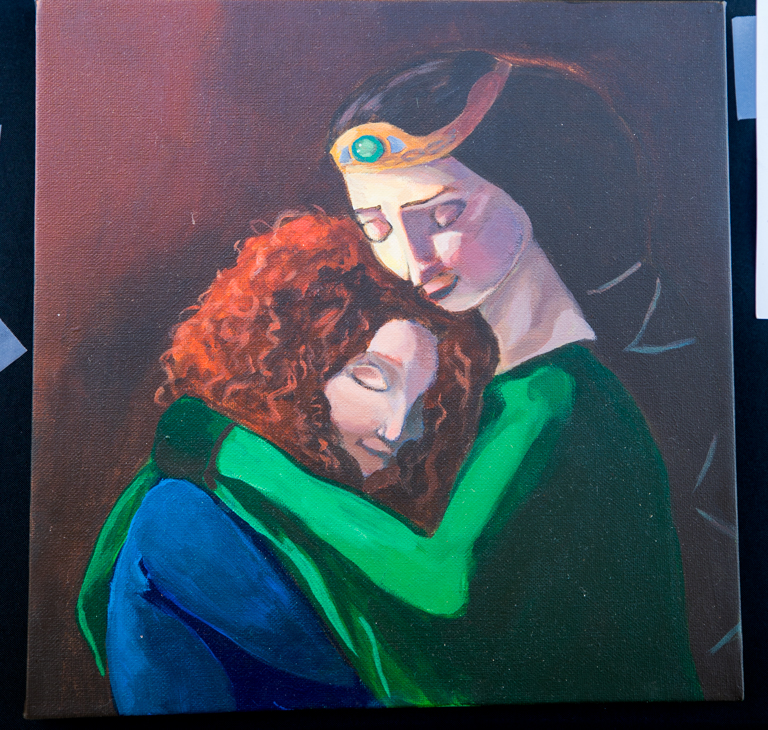 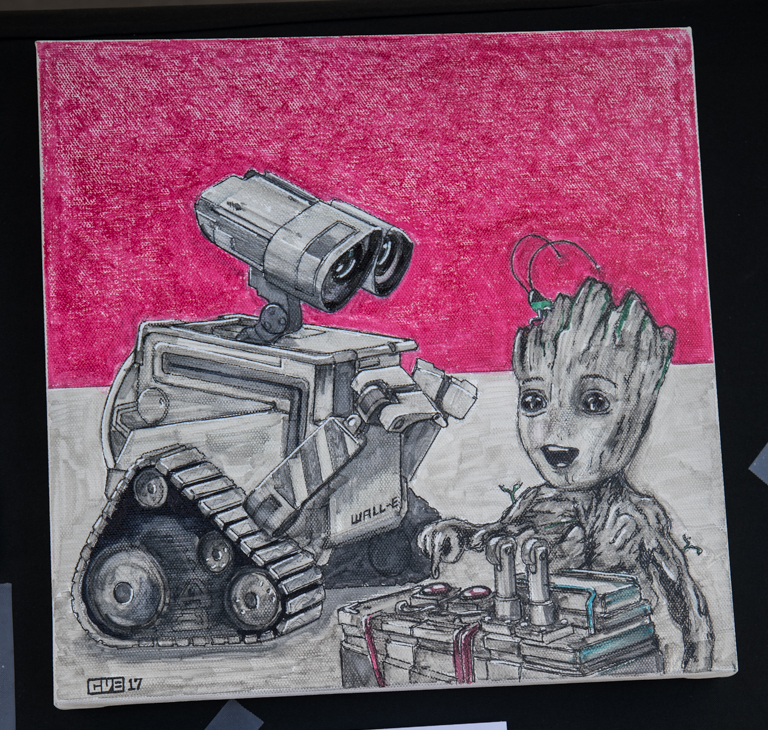 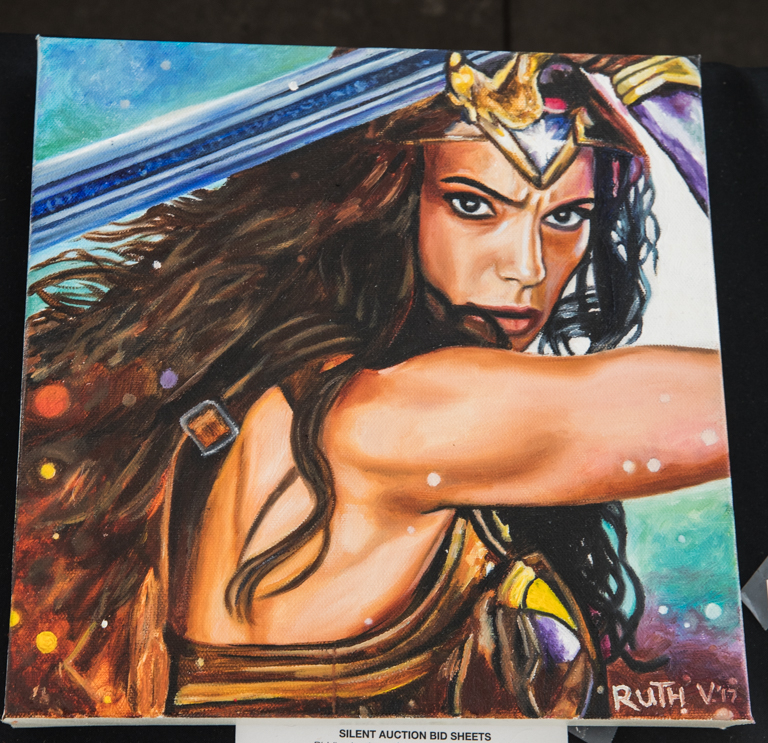 As the closing time of 6pm for the silent auction got closer and closer Ruston said the excitement in the area was electric. Everyone was hovering over the tops of the paintings they had bid on, making sure no one snuck in a last minute bid on something they wanted.
When the time finally came, Ruston said the couple standing over mine were so happy to have won and excited to talk to us! Bummer I couldn't stick around, but Ruston made sure to tell them about the special things hidden in it.
I was happy to see that it sold for our highest amount yet! I was just thinking maybe it would break $100. In the end, it went for $135! 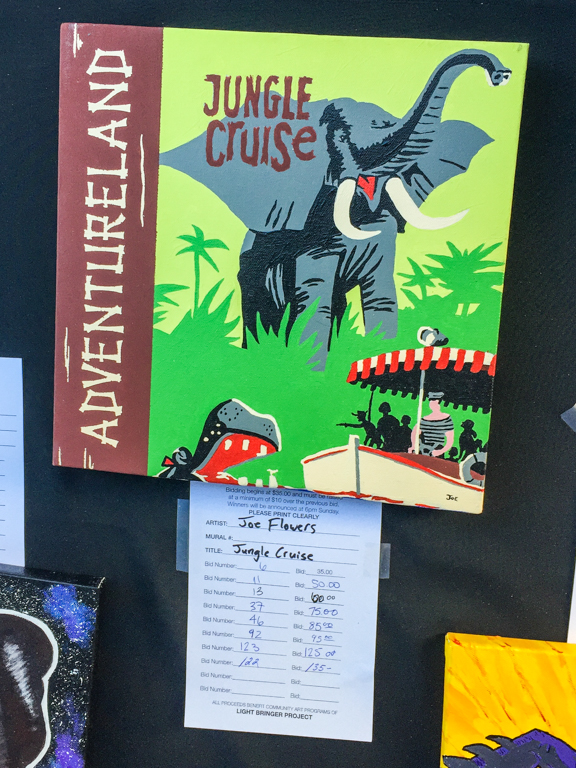 Congratulations on winning it! 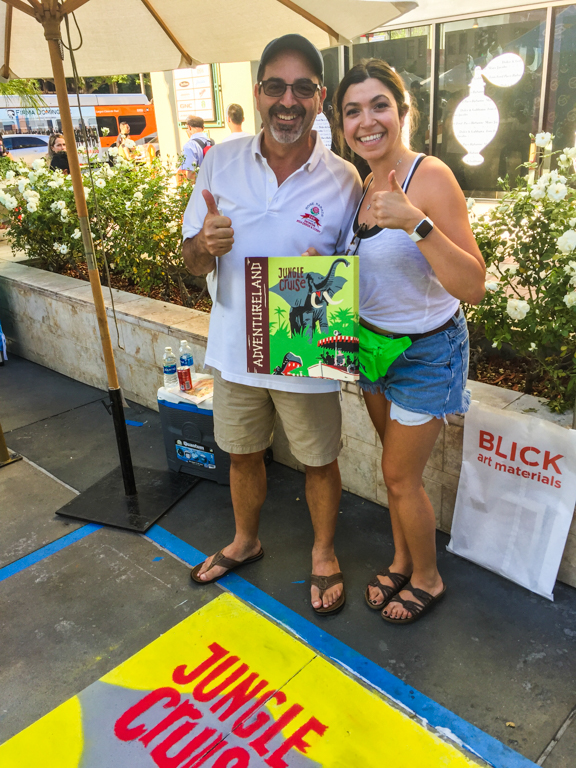 Well it's been a fun festival. Already Ruston and I are discussing what to do next year!
Posted by Joe at 8:00 PM