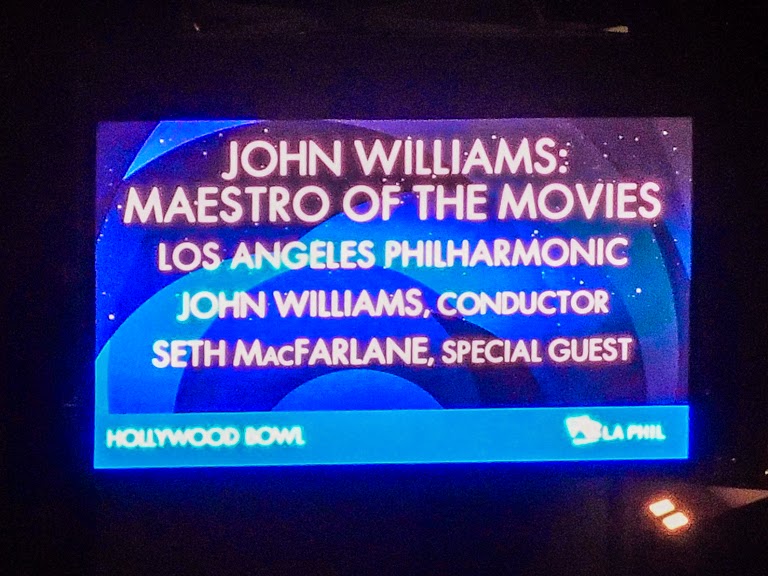 John Williams is 82 this year and is as sharp and well-spoken as the first time we came to see him. He puts on a truly incredible concert. And how could he not? His music scores all our favorite movies. 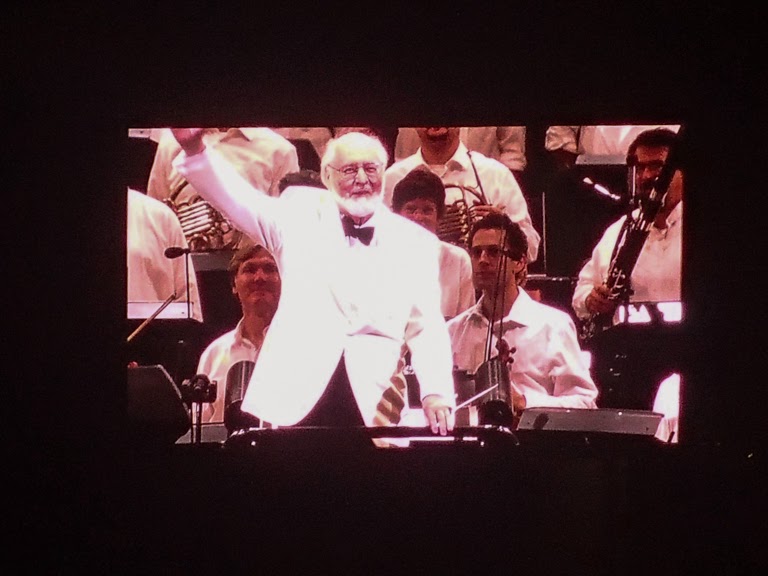 For various reasons the group going this year was smaller than past years. Jacob caught the bus from Long Beach, while T, Adam and I drove up. For $17 you can park in a stacked parking lot very close to the Bowl. 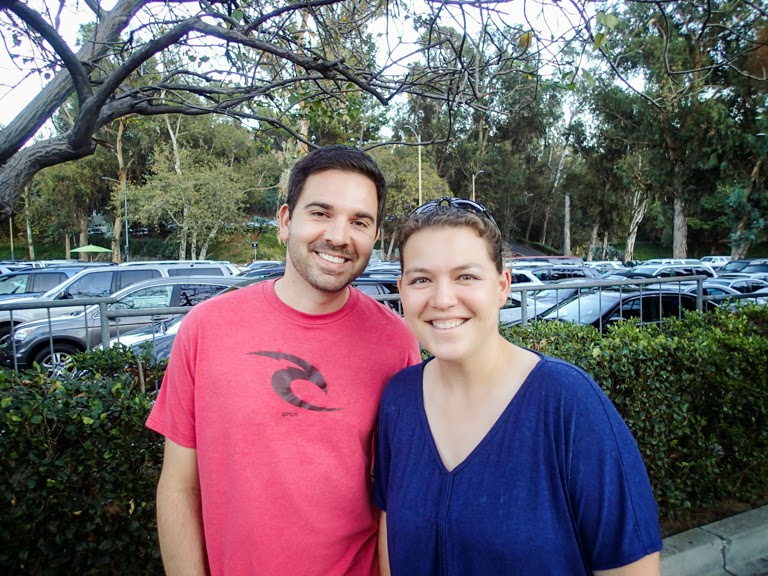 On the walk in, I was telling Adam what I was hoping to hear tonight. Of course we'd hear Star Wars, but there are so many other movies that he's composed the music for. I'd love to hear the Indiana Jones theme and something from Harry Potter. Either way though, I'm sure it's going to be a great concert. 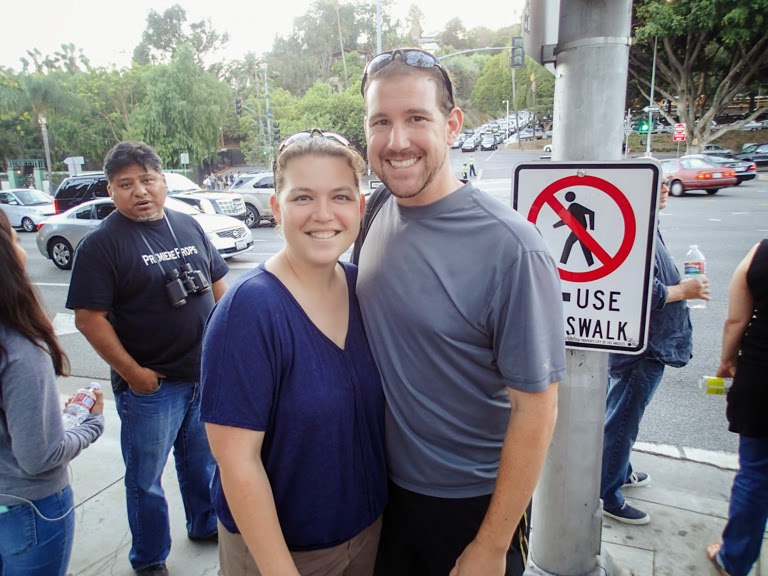 The area around the Hollywood Bowl is understandably packed with people. Police are directing traffic and large crowds gather at the traffic light until it's time to cross. 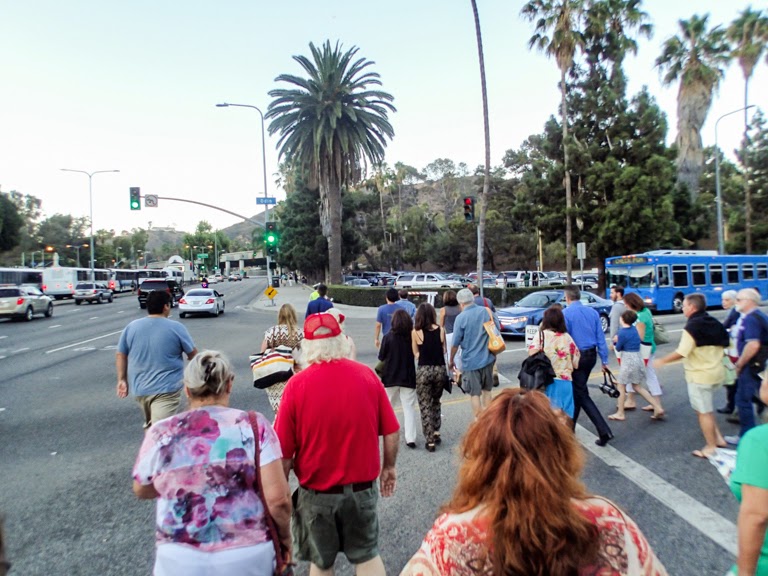 Entering the tunnel that leads underneath the street that will take us to the Hollywood Bowl. 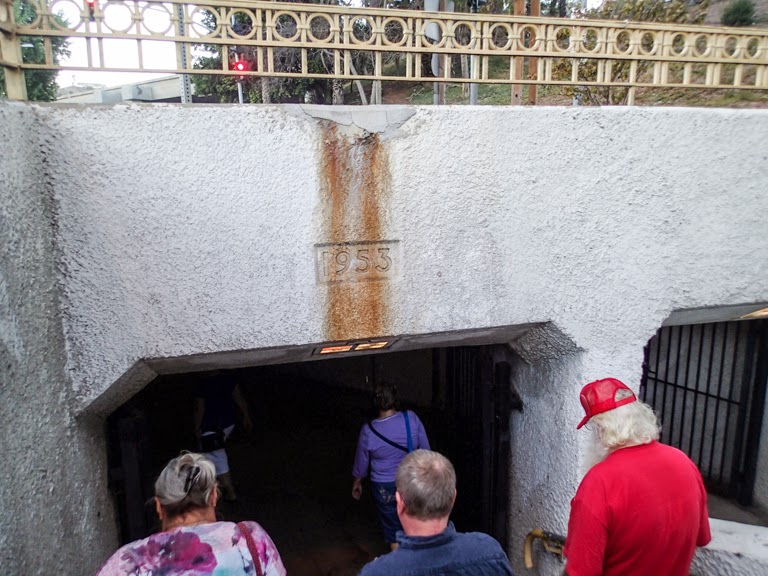 There were no problems getting in to the Bowl this year and the bag checkers were hardly paying attention. You'll have to excuse the crudity of all these pictures since they were taken by a point and shoot. In the past I've taken my nice DSLR but had been told to leave it in the car once I got to bag check. I probably could have brought it today, but didn't want to take the risk. Using the escalators to get up to our section. 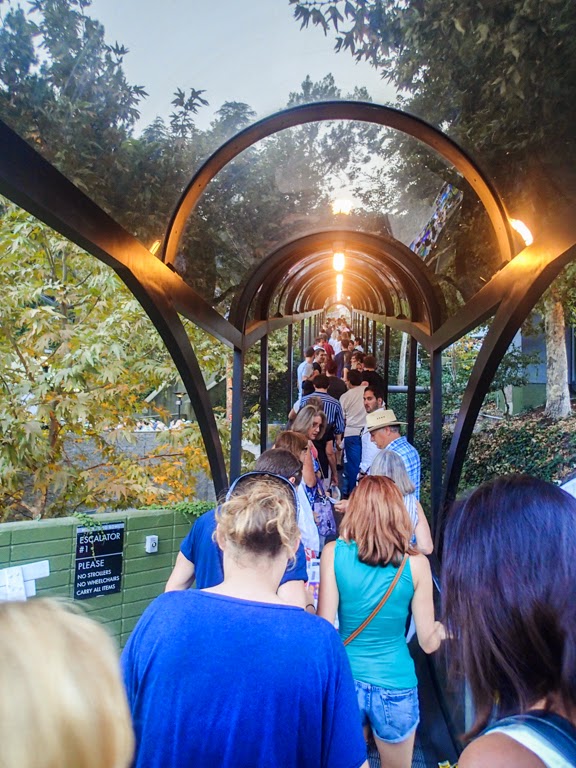 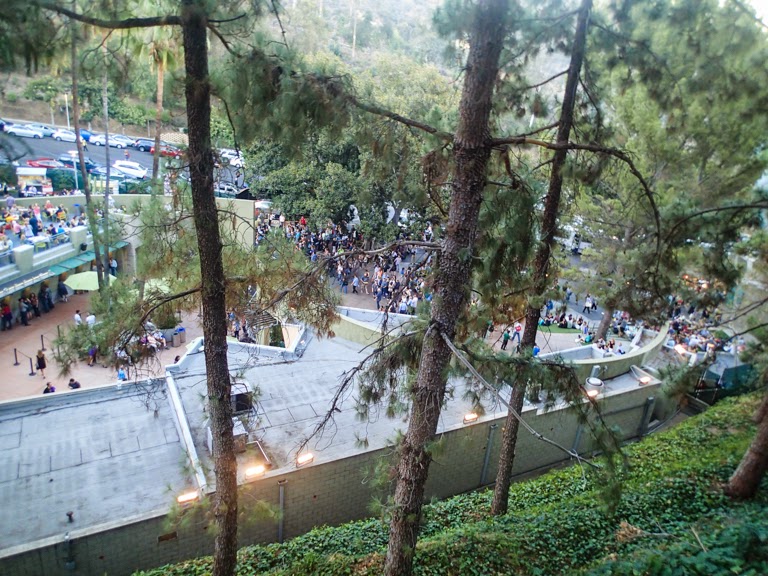 The view from our seats. I think this is probably the highest we've sat. I lucked out though when finding tickets and we happen to be in the very front row! We're in section R2 (appropriate since we're hearing music from Star Wars) and seats are $30. Compare that to the people in the very back row of the section in front of us. They're paying $42 for their tickets. Being this high, you can even see part of the Hollywood sign. 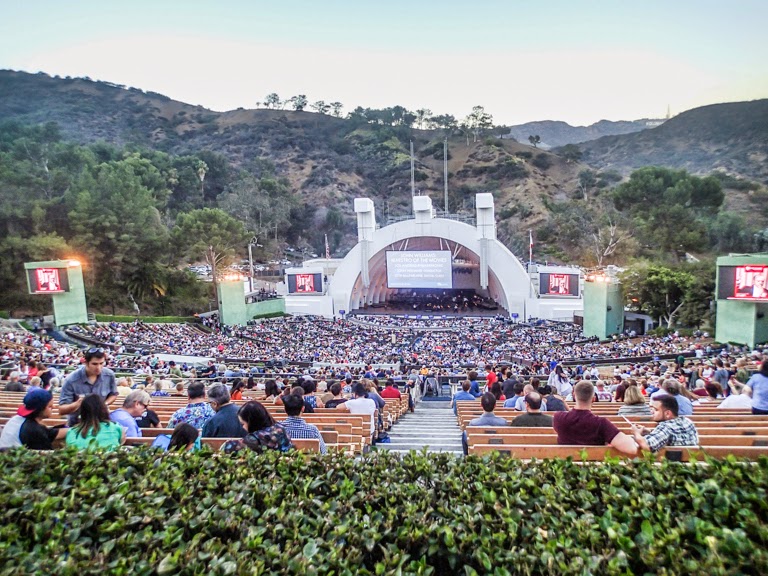 Welcome to the stage John Williams! 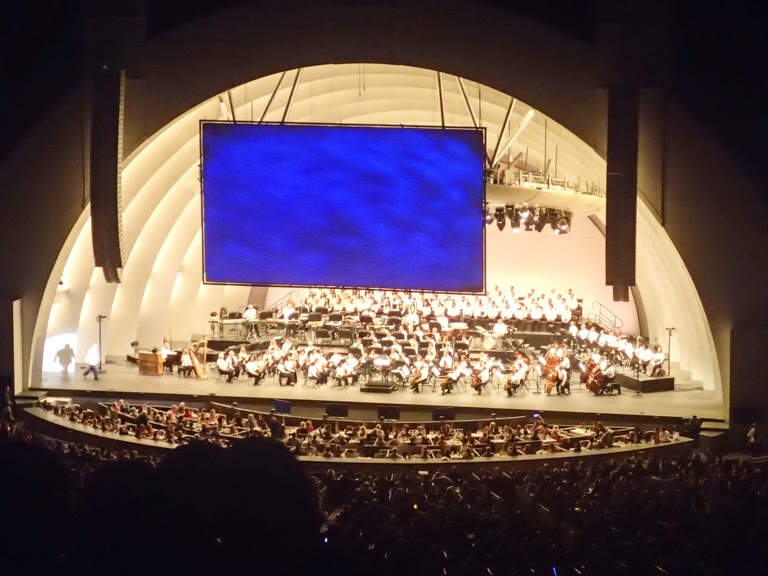 So awesome to be back here again this year.

Before doing anything, the entire orchestra stands up and the philharmonic plays the Star Spangled Banner. Hearing that with 15,000 people singing along was enough to give me chills. It's going to be a good night.

First we heard "That's Entertainment" by Schwartz/Dietz, conducted by John Williams. Next was the theme from Jurassic Park. I love this movie!

After hearing A Salute to David Lean, which included Excerpts from A Passage to India and Lawrence of Arabia, we next heard Sayuri's Theme from Memoirs of a Geisha. Adam thought this particular piece was incredible, and loved the solo from the cellist.

I was excited to see that there was a choir this year. In years past when there was a choir, Dual of the Fates from Star Wars was played and sounded fantastic. I was curious what we'd get to hear this year. The Cal State Fullerton University Singers sang Call of the Champions: A Salute to the Olympic Games. 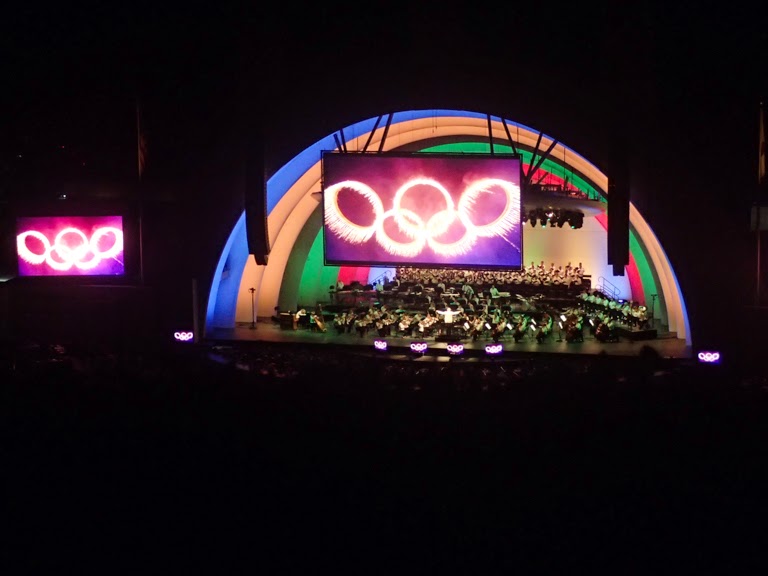 Look for Phil Dalhausser and Todd Rogers on screen near the end.

Next was Hymn to the Fallen from Saving Private Ryan.

Next was a movie I haven't seen yet, but now I'm interested in watching it after hearing John Williams talk about his experience with it. From the wikipedia page:


Amistad is a 1997 historical drama film directed by Steven Spielberg based on the notable uprising in 1839 by newly abducted Mende tribesmen who took control of the ship La Amistad off the coast of Cuba, and the international legal battle that followed their capture by a U.S. revenue cutter. It became a United States Supreme Court case of 1841.

John Williams spoke about his working with Steven Spielberg on this movie and how Steven felt he needed singing to go along with it. John then went on what he believe to be a difficult task of tracking down a book with Nigerian poetry that might have words he could use for the song. A book was found and on the third page was a poem titled Dry Your Tears Africa, Your Children Are Coming Home, which he ended up using. The Los Angeles Children's Chorus joined the Cal State singers and performed Dry Your Tears, Afrika. (This video is actually from an earlier performance. I haven't been able to find anything from that night yet).

Time for intermission. So far it's been an awesome performance. Getting a group picture. I don't think I mentioned that Steven and his wife Jennifer were also attending and sitting right behind us. 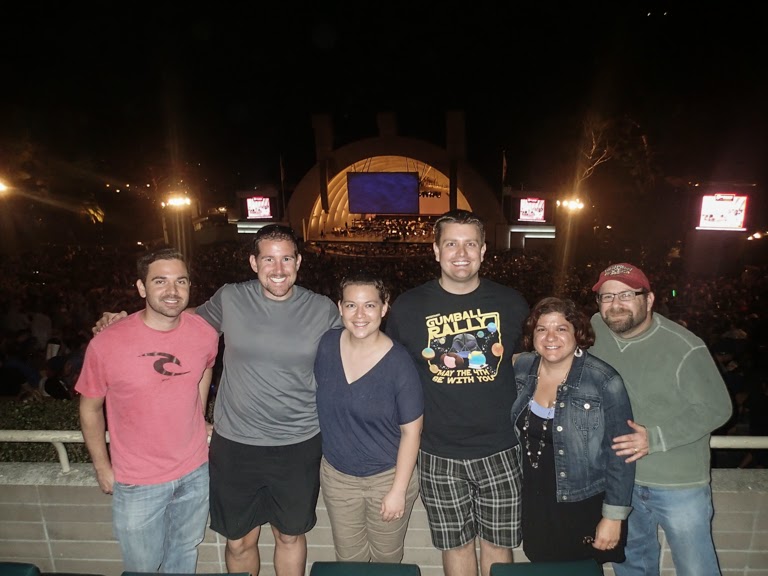 So awesome to have the very front row of our section! 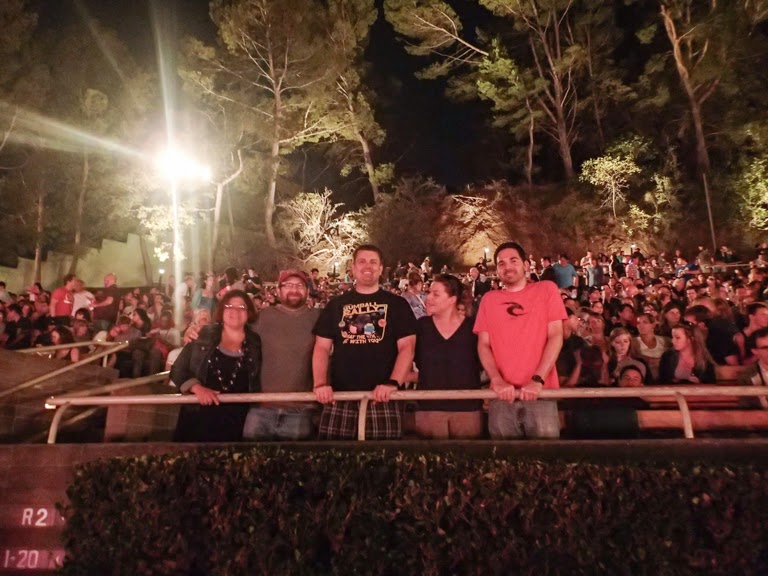 Returning from the intermission, we hear the Superman March. As soon as it started, lightsabers started waving all around the crowd. I guess it sounds fairly similar to the music from Star Wars.

Next it was time for special guest Seth MacFarlane to come out on stage. I was thinking he'd come out and talk to us a little bit, but was surprised when he walked on stage, mouthed "That's John Williams!" and then launched into Luck Be A Lady. 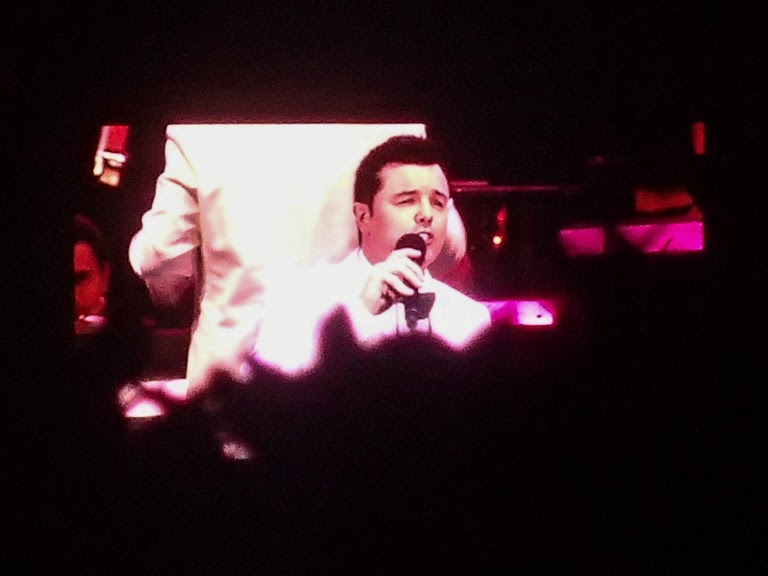 My video of it. I was running out of storage space on my camera, so the second half is just audio, but it's actually pretty decent. Seth MacFarlane can definitely sing. Along with Luck Be A Lady, he also sang You're Sensational and Everybody Needs a Best Friend.

Next was A Salute to Dance in the Movies, playing Tango from Scent of a Woman.

To end the main program, we'll of course have music from Star Wars. I was really excited when I read this in the program. Pyrotechnics? Sweet!

It's awesome seeing so many fans waving their lightsabers around. 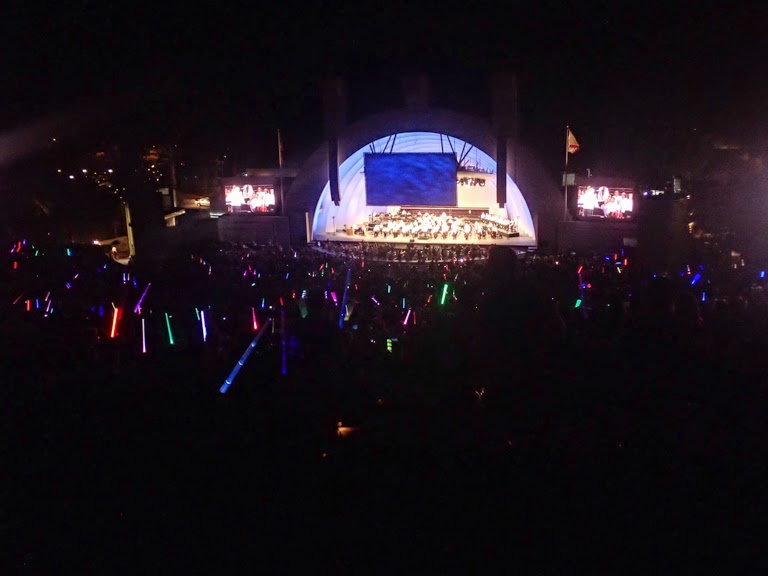 Even members of the orchestra wave around their lightsabers at the end. Sadly no fireworks or anything, but still amazing.

So that was it for the main portion of the program. But, if you know anything about how John Williams' concerts at the bowl, you know he'll be coming back out to do two or three encores. 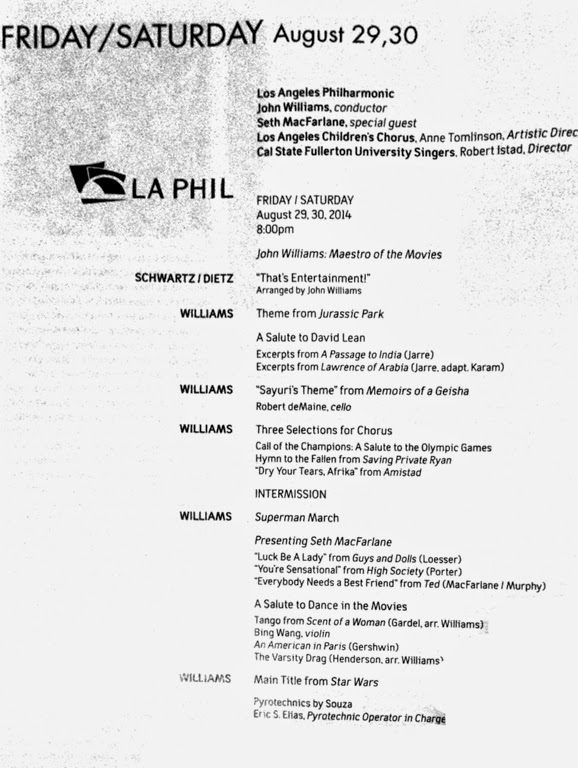 After exiting the stage once again, he came back out to perform another number. I got my wish from earlier in the evening! The theme from Indiana Jones: Raiders of the Lost Ark! 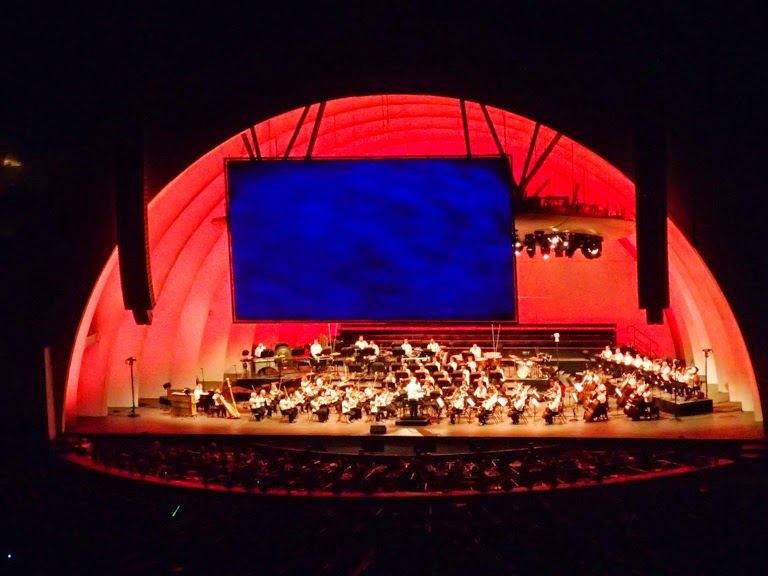 Video is from an earlier showing.

Well he's had three encores. Is he really going to do a fourth? Yes! The flying sequence from E.T. The Extra-Terrestrial! My favorite part is at the end when the lighting changes from green and a rainbow appears. 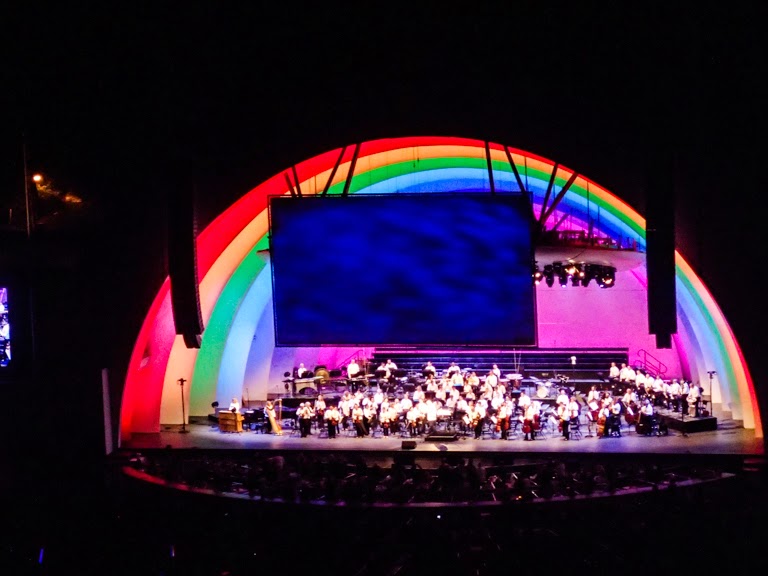 So four encores. Think he has another one in him? Again he walked off stage but came back out to everyone standing on their feet cheering. Ever since we've been coming, he always ends his concerts with the same joke. He signals that it's time for him to go to sleep then leaves the stage for good. Excuse the poor quality of the video once again.

Concert over, we join the masses and exit the Bowl. There's a ton of people, but thankfully no one is in a hurry. On the way out we talk about all our favorite parts of the concert. 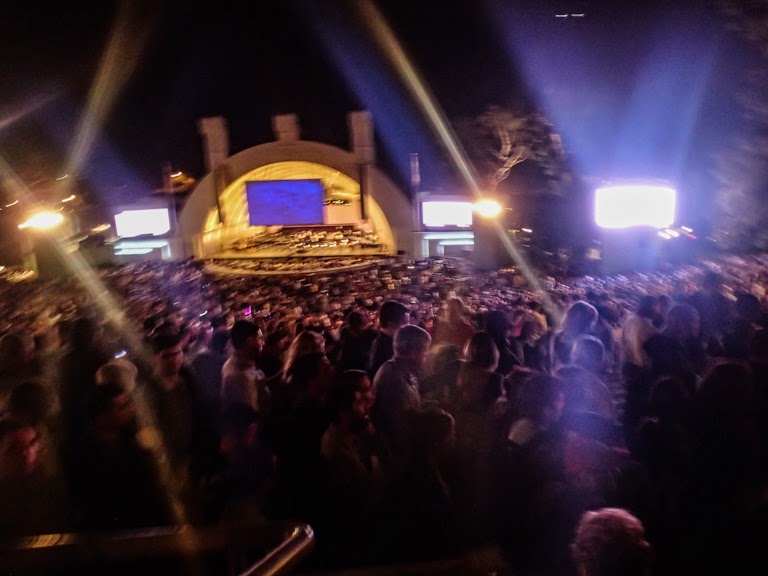 Walking to the car you pass these street vendors who make what smells like the most delicious bacon wrapped hot dogs with onions you can imagine. The smell permeates the air here and makes your mouth water. If I wasn't running a half marathon in a couple days, I might just indulge. This year though, I'm going to pass. 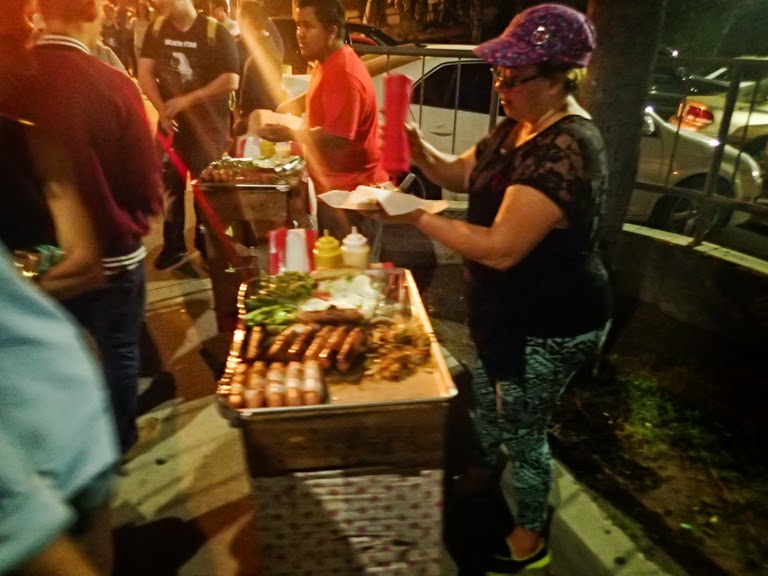 Even though it was a stacked parking lot, the way in front of our car was clear and we were able to pull right out.
It was an amazing concert and as long as John Williams keeps putting them on, you can bet we'll be coming back!
Posted by Joe at 11:00 PM