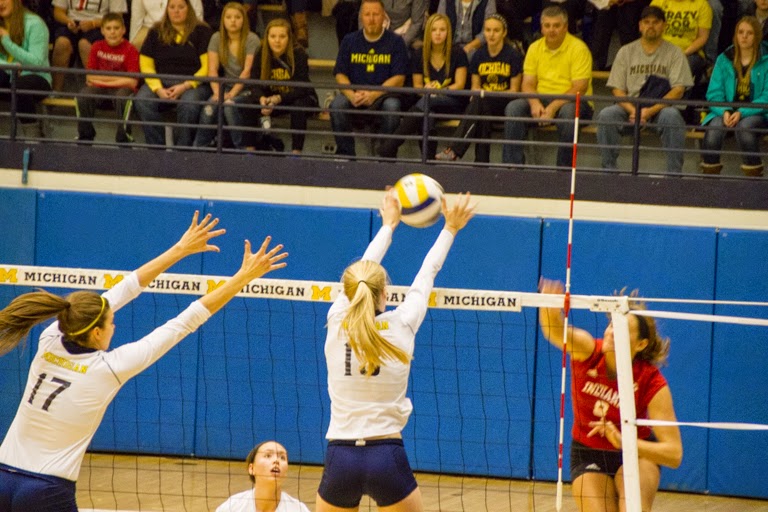 Just a quick aside, Donald and I caught the matinee showing of Dumb and Dumber To earlier today. It came 20 years after the original. It had some really funny moments, but as a whole, I didn't care too much for the story. And that van that was featured all over the posters, probably had screen time of less than 30 seconds. Overall it was pretty meh. 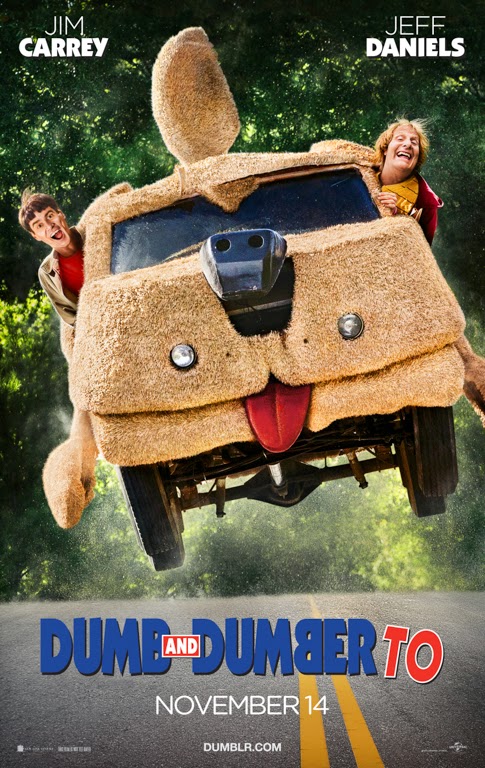 This photo was just before we left the house. Everyone went except Ian and the grandparents. 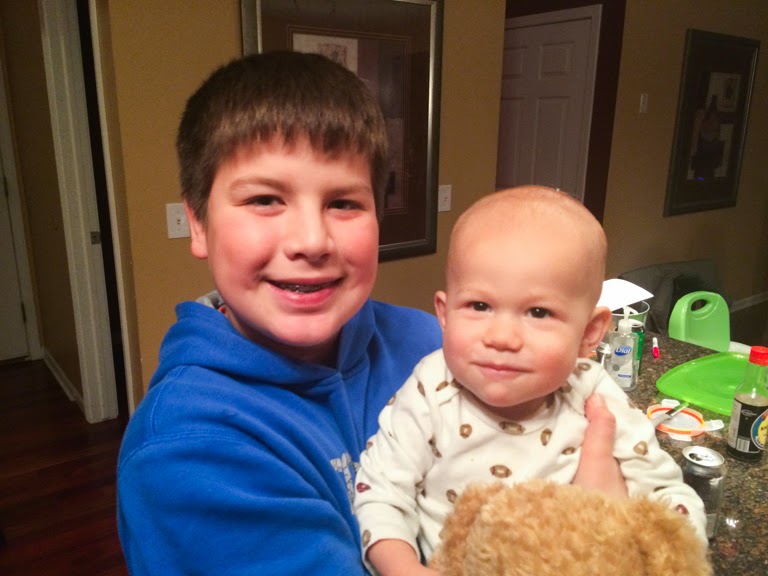 I was shocked how cheap it was. Free parking and only $3 for general admission seats. 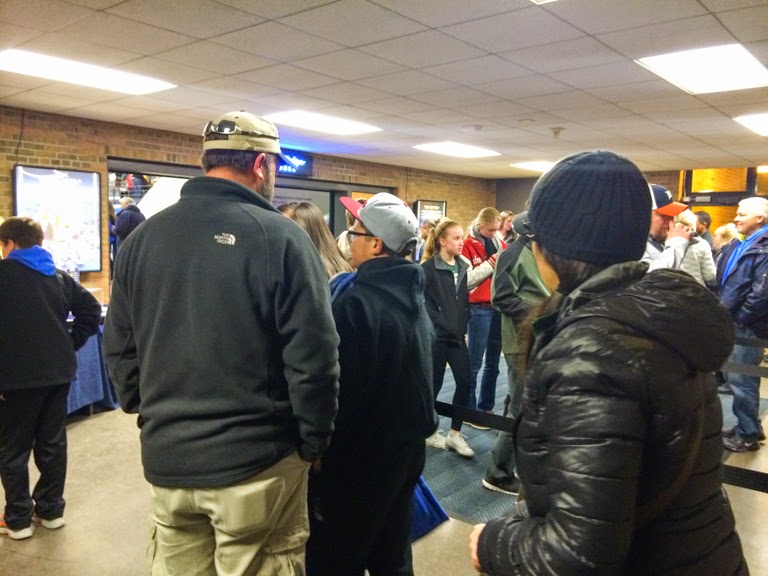 We watched the girls warm up from pretty decent seats. 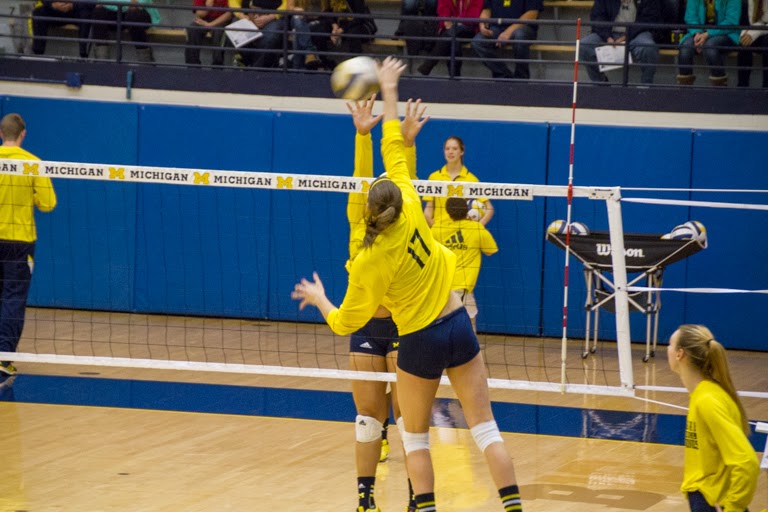 Theresa's getting inspired to get out and play again. 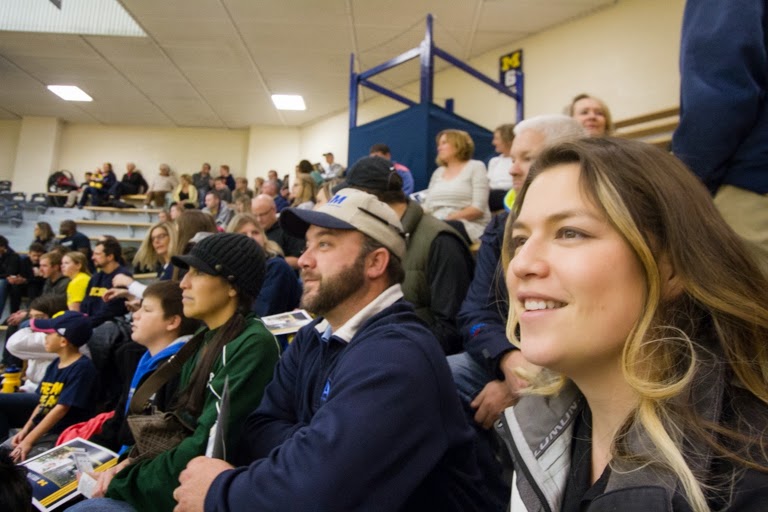 Amy is never embarrassed to get up and start dancing when the music starts playing. 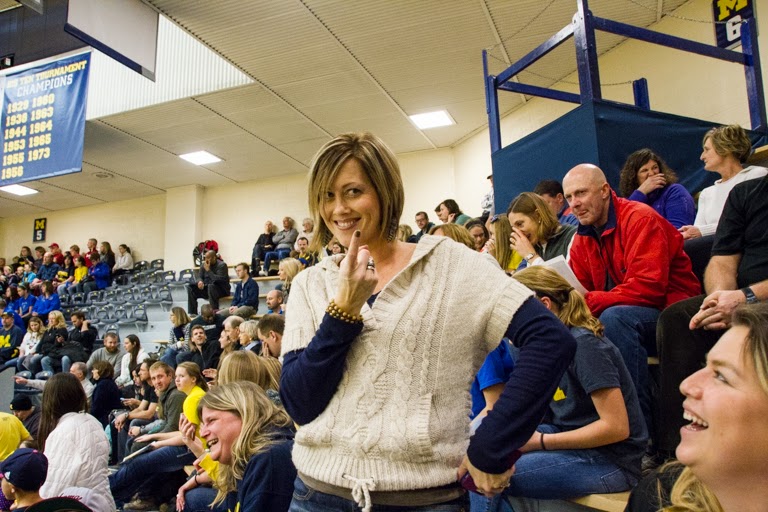 Michigan has a fun tradition where all the kids go out to the floor and make a tunnel for the players to come through as they're introduced. 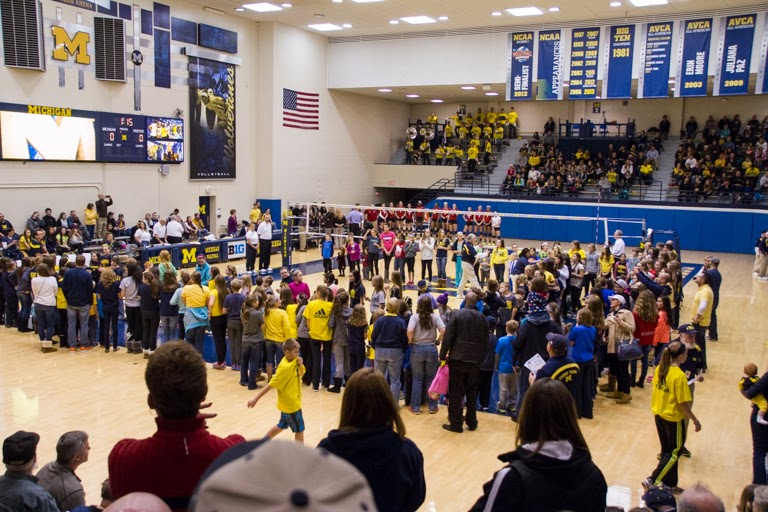 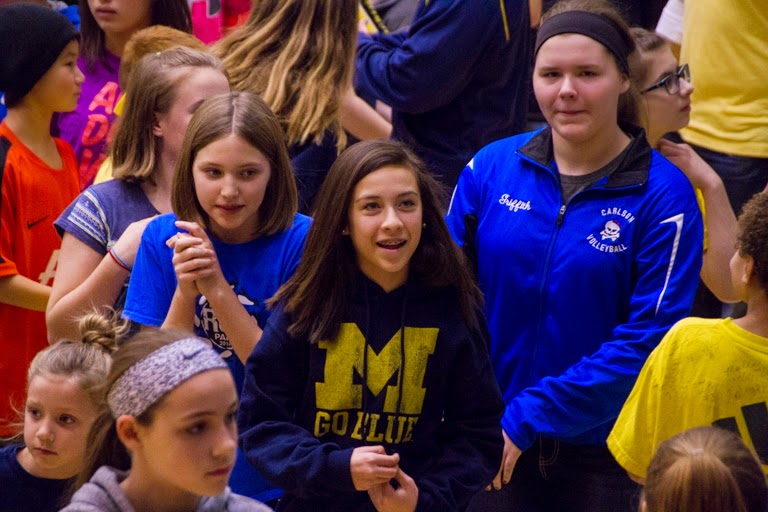 Michigan has a 6'5" Middle Blocker named Abby Cole.  Before each point she would reach up and grab the net like this. Pretty intimidating. 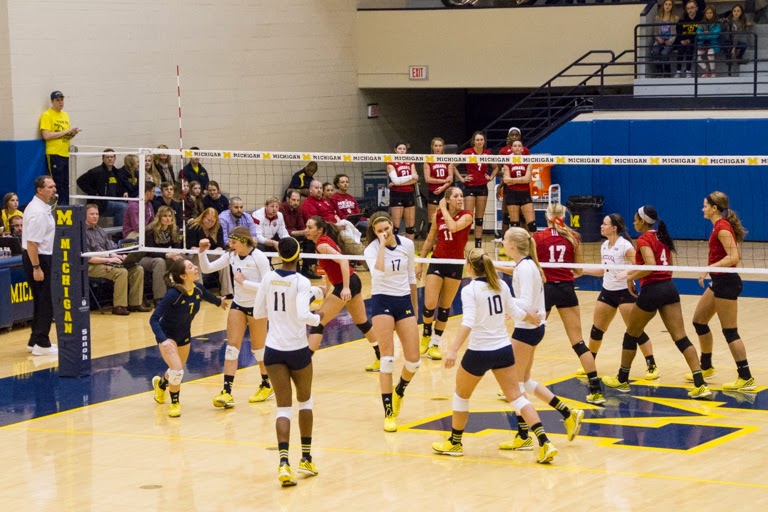 Though she was not the only one who could get up to block.

We made sure to cheer extra loud for #7 Tiffany Morales from our home city of Redondo Beach, CA. 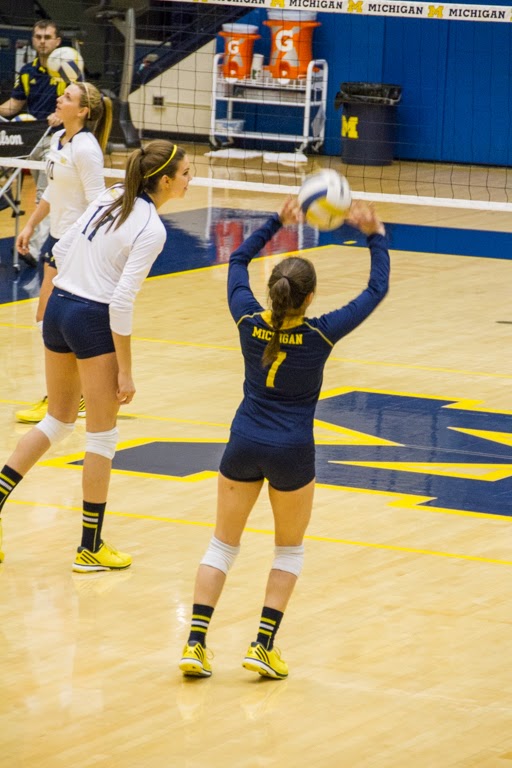 The match is best of 5 games, and after the first game, we figured we'd be in and out quickly. The games are played to 25 and here the score was 24-8. 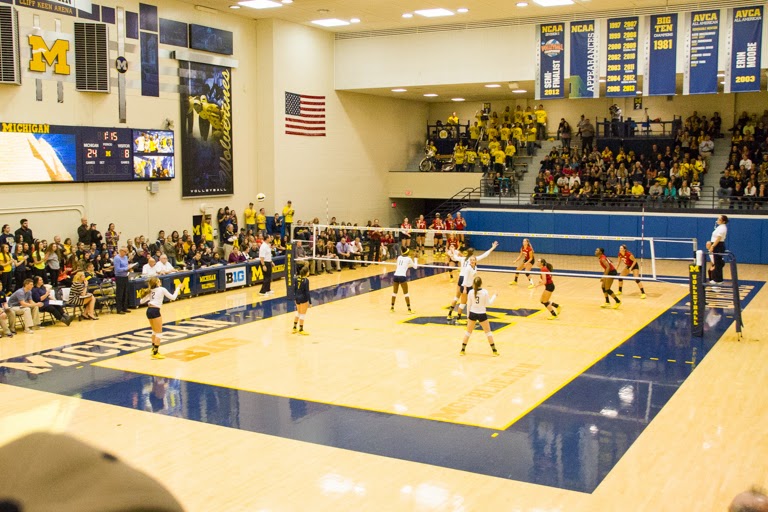 And with that block, they close out the first game 25-8. Like I said, after that, we're expecting it to be over in a quick 3 games. 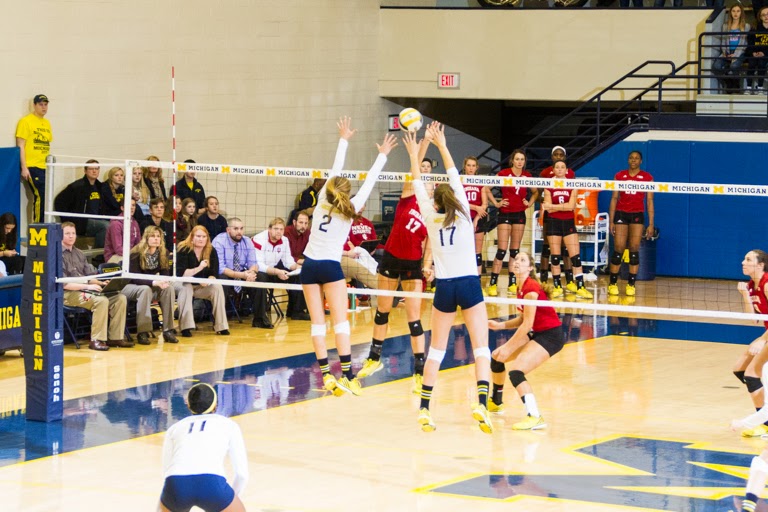 The Michigan band making sure to celebrate each point. 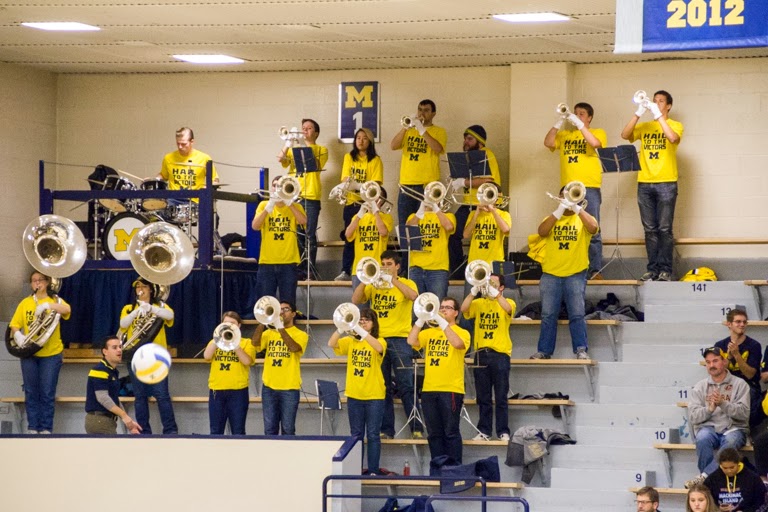 And whenever Michigan scored, this would flash on the board and the announcer would say "Point Michigan" but he'd pronounce it "Point MEE-SHA-GUN" 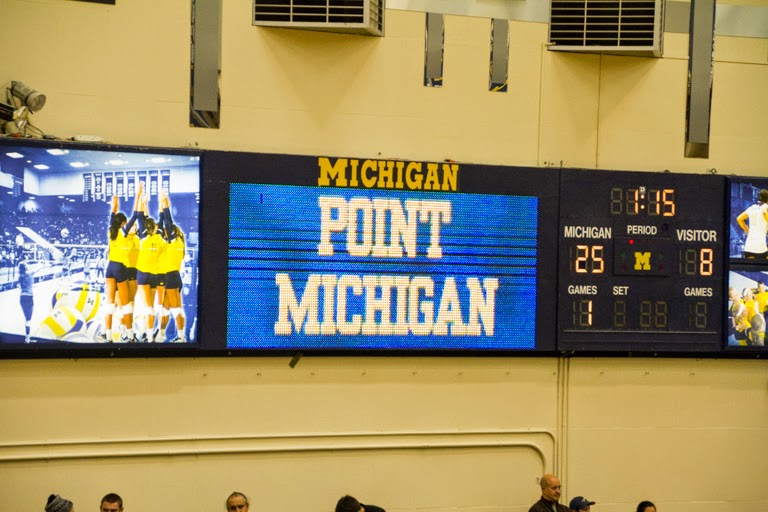 Ready to block some. 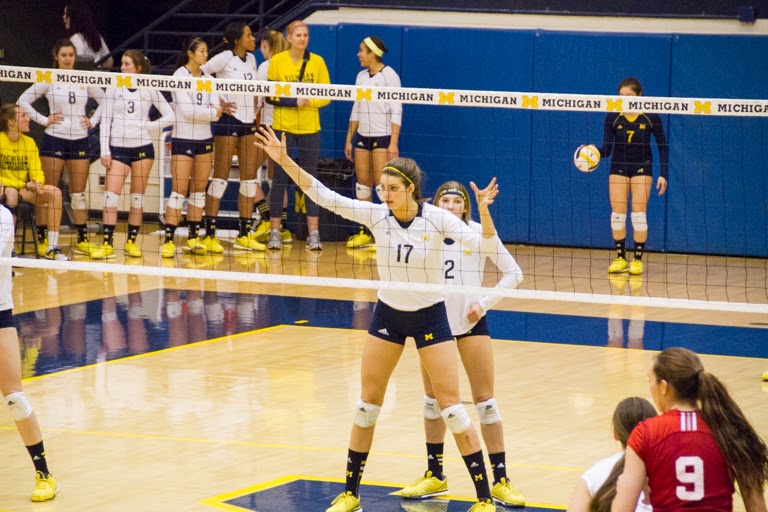 Well Indiana had other thoughts on letting it end after a quick 3. They would end up taking the 2nd game. Michigan won the 3rd, then Indiana won the 4th. We're going to game 5. 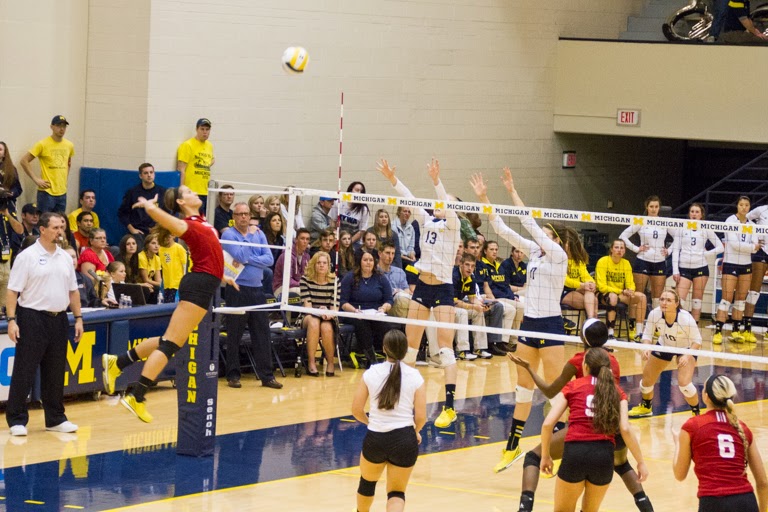 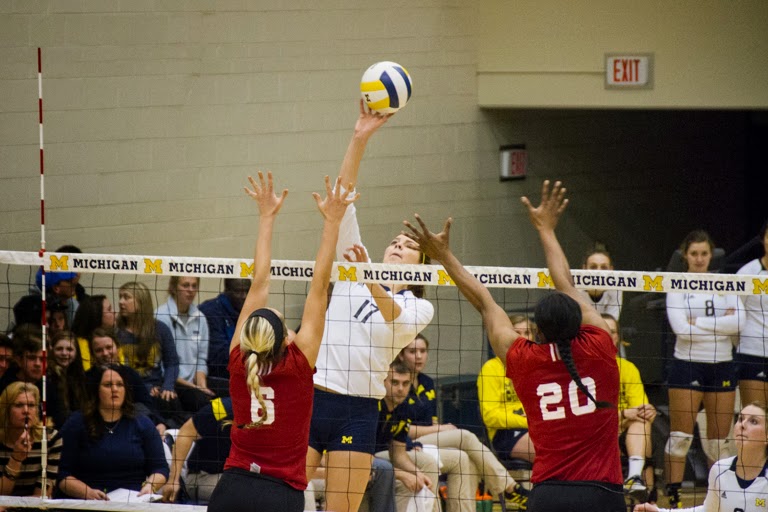 Donald was able to get a few names on the scoreboard. No room for the Flowers' but it was nice to see someone we knew up there. 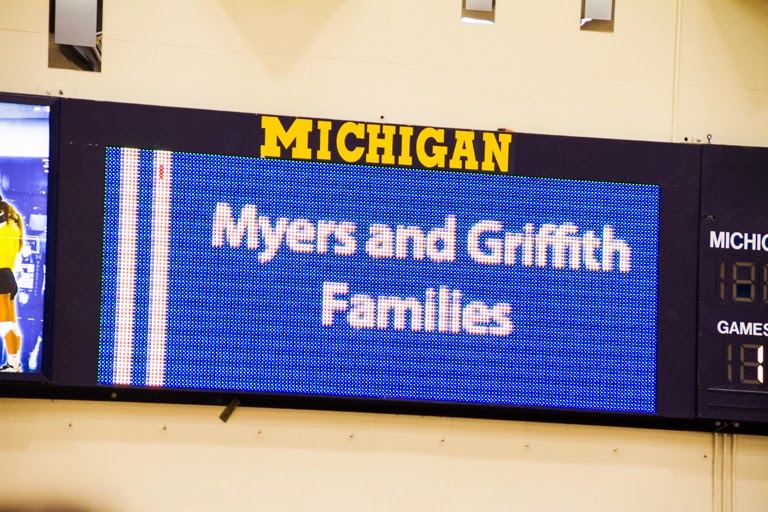 The 5th game was tight, but in the end, Michigan came back and won! Go Michigan! 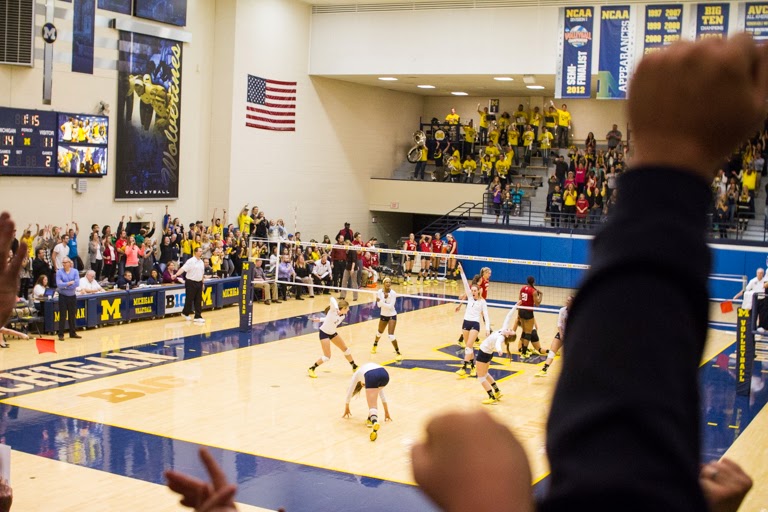 After the game ended, Rita took all the kids home in one car, while Donald, Amy, Tyler, Theresa and I all piled in a car and went back to the same movie theater we've been frequenting this trip.
Interstellar has some of the highest reviews I've seen in a while. With 250,000 people rating it, it had a score of 9.0 / 10.0. Pretty impressive.
The five of us watch the 10:10pm showing and I was definitely surprised because this movie is nearly 3 hours long. We settled into our reclining theater seats, but no one fell asleep because the movie was so entertaining. 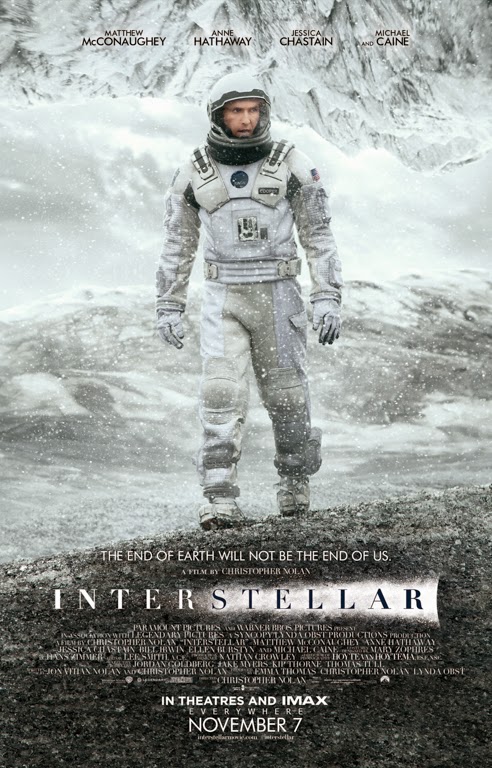 Basically it was an awesome day!
Posted by Joe at 10:42 PM