There's only one day left at the park and there's still so much to do! 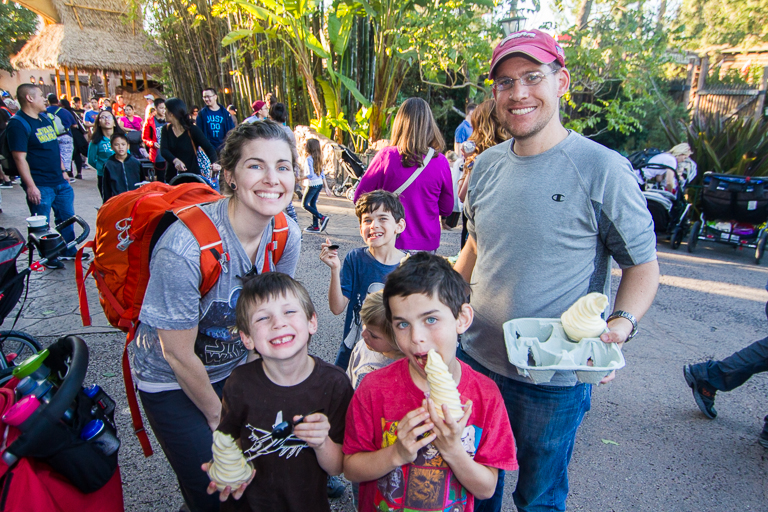 Because she was such a big fan, of course Emma had to go see the Frozen sing-along.

Not only that, but she went to the Animation Academy and met Elsa and Anna in person! Once she finally got to meet them, she asked if they'd like to come over for a sleep-over (I wonder if they've ever received that question before). 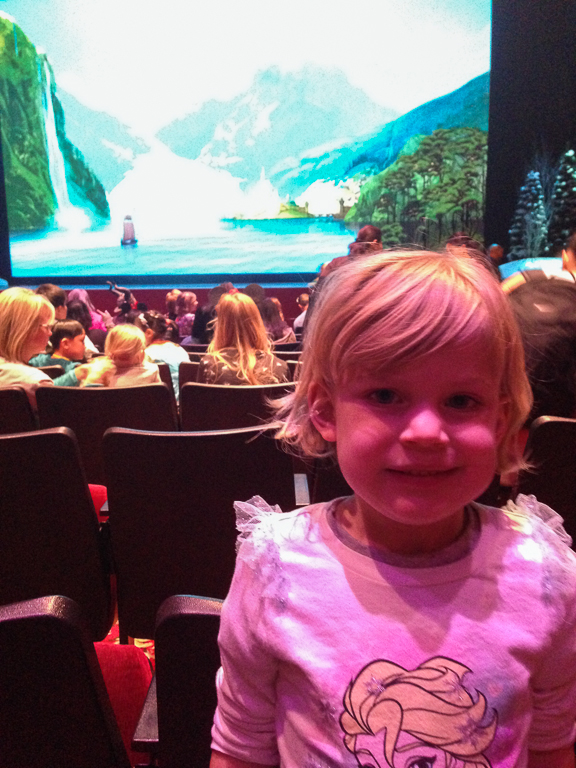 All the while the boys enjoyed some tasty treats. They were inspired to make their own rock candy once they got home! 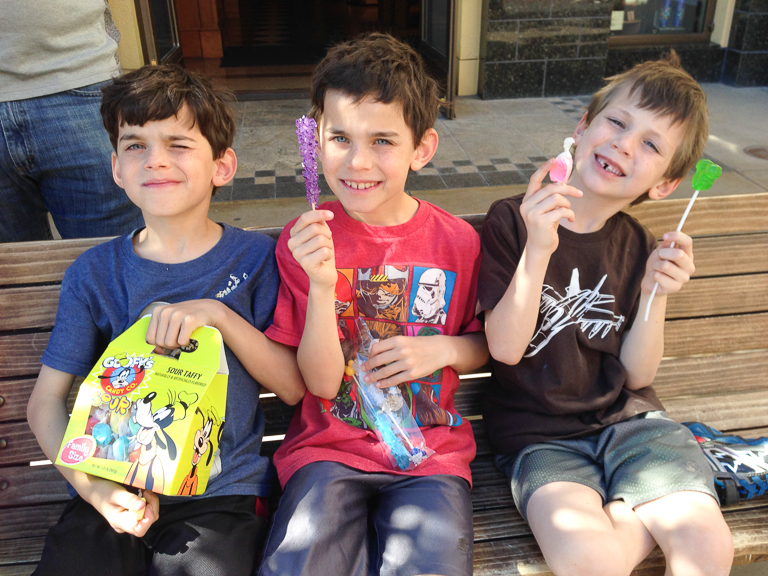 Time to head back over to Disneyland. 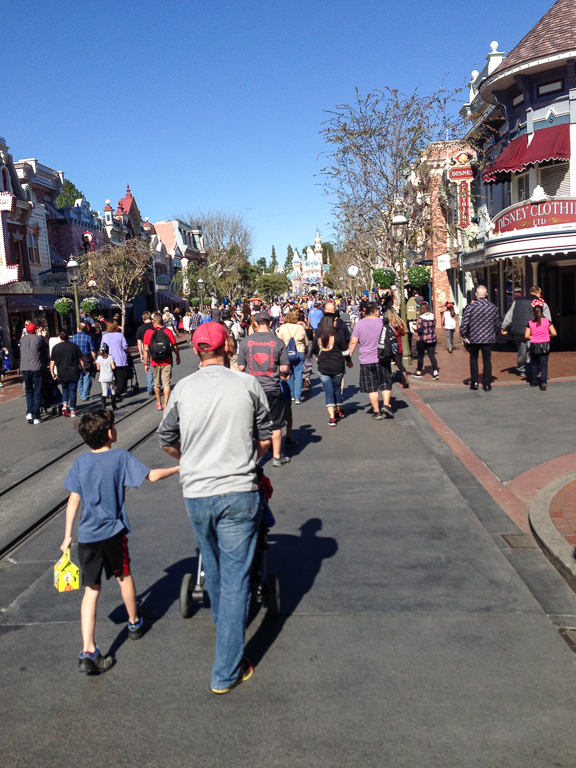 After grabbing a few fast passes, the monorail was high on the list of things to ride. After having a great time playing with the toy monorail earlier in the week with Ian, everyone was excited to get a ride on the real thing! 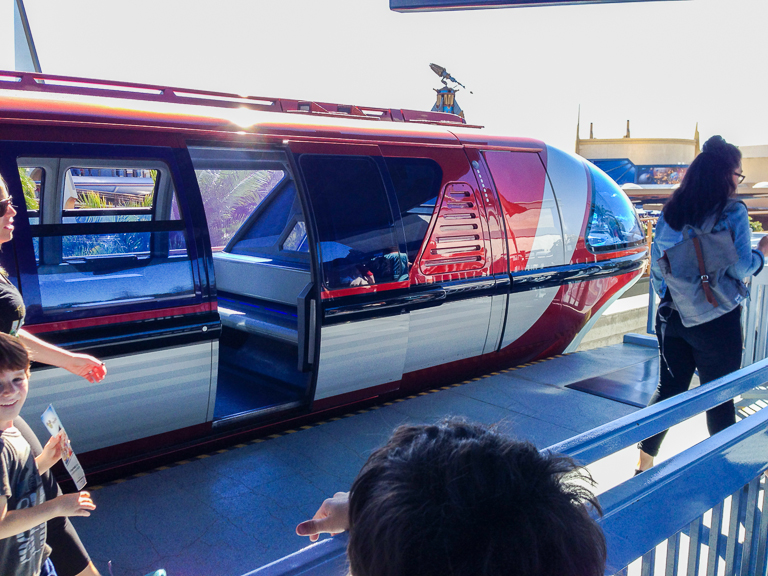 And they even lucked into riding all along in the last car. What a view! 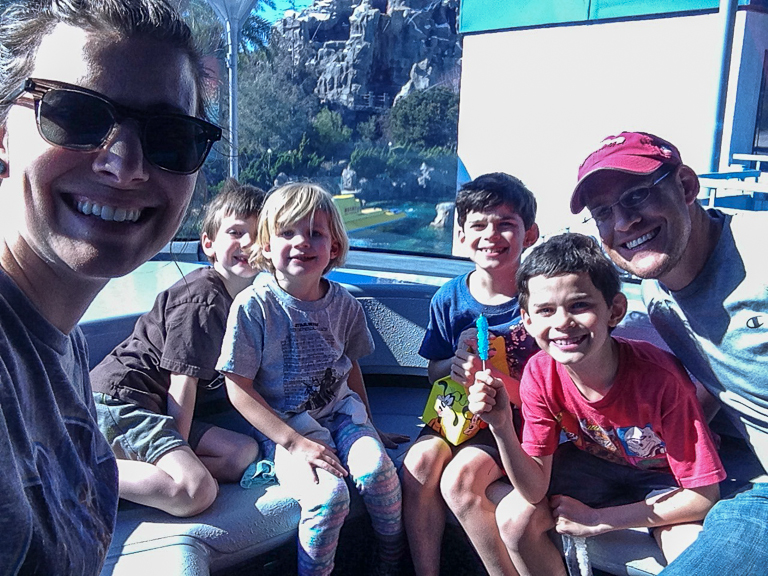 Along with a ride on it's a small world, they went back to Toontown to see the main mouse himself. 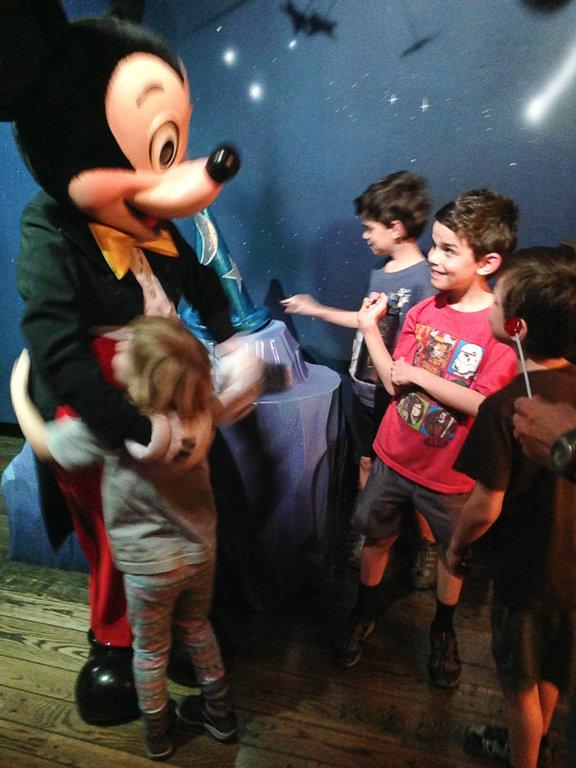 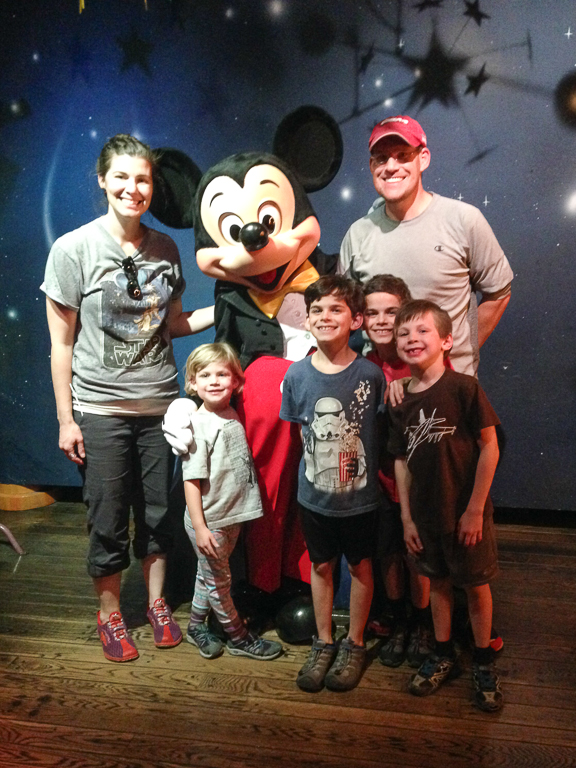 Theresa and I took off work early on Friday to join everyone at Disneyland as soon as we could. It just happened to line up with Ian's nap time, but luckily he was okay sleeping in the stroller. 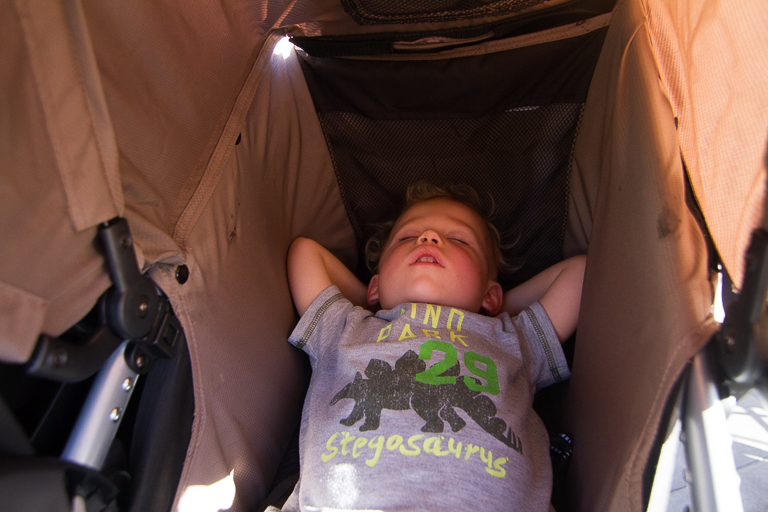 They had already taken a ride on Star Tours earlier in the day, but were able to pick up a fast pass for now. Jon let me take his fast pass and see the new Episode VII scenes! Thanks! 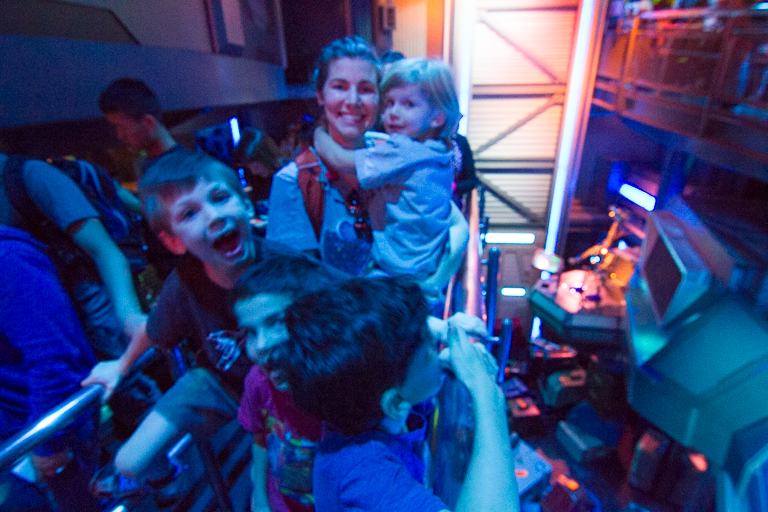 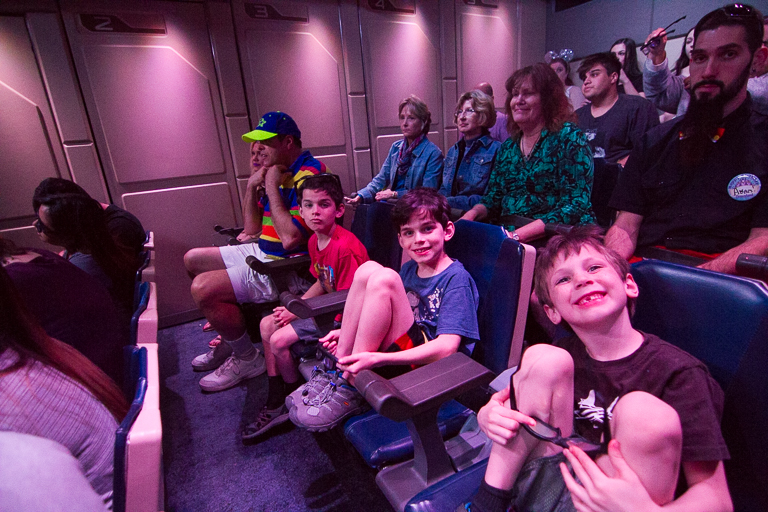 And Emma was excited to take a trip to Jakku. 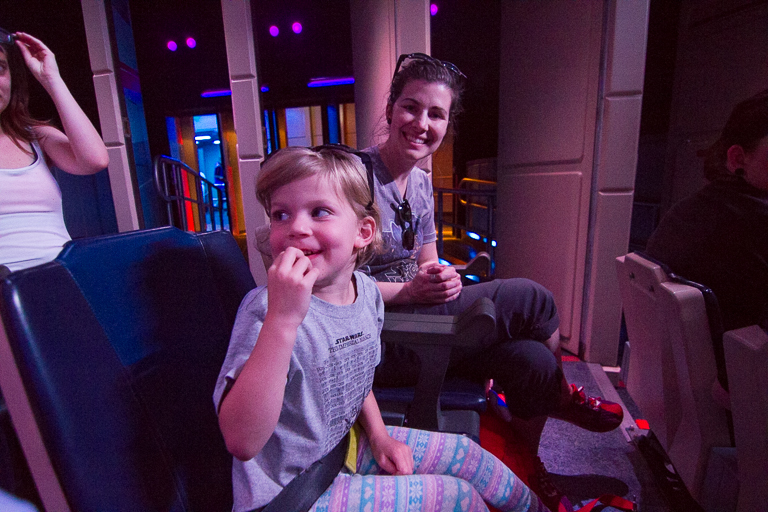 After the fun trip on Star Tours, Jon and his whole family went to see Star Wars: Path of the Jedi, while Theresa and I met up with some friends visiting from Arizona. Kelly, Sean, and their two girls are here for just a couple days to see the Mulan and Mushu and all the other fun offerings for Chinese New Year. 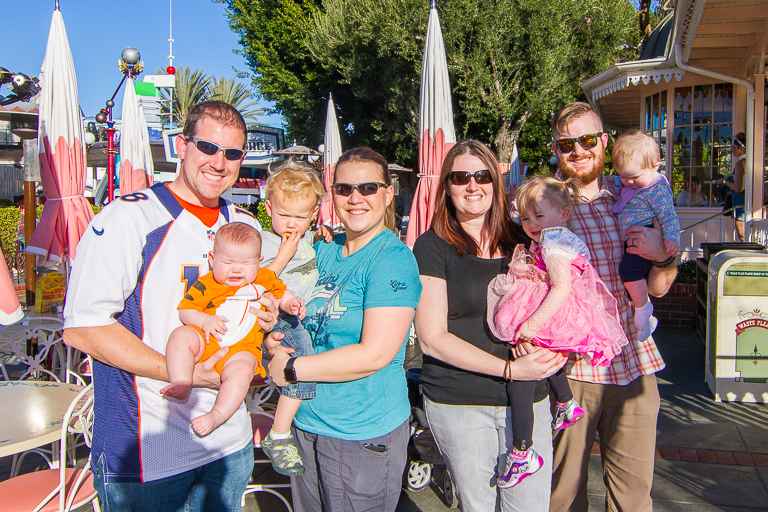 Kelly, Sean, and the girls were going to join us in the Enchanted Tiki Room, but it was getting a little crowded over there, so they caught the parade instead. While everyone was inside watching the show... 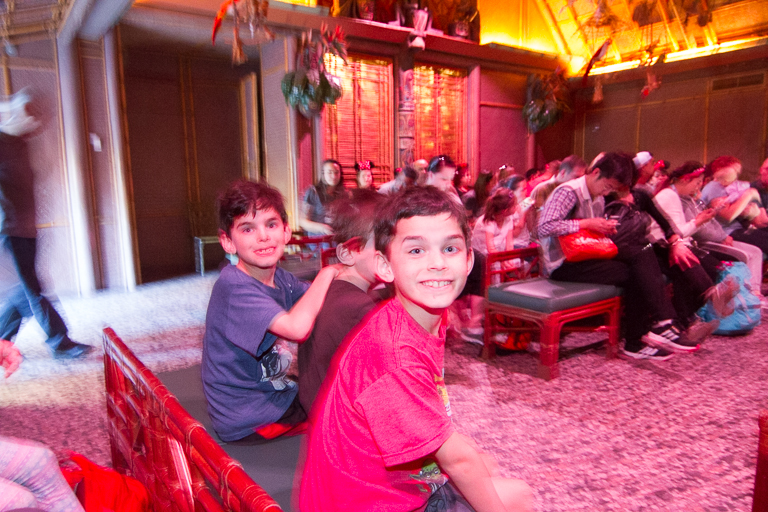 ... Jon was outside grabbing everyone Dole Whip! He would have joined us, but the line for the Dole Whip stand was ridiculously long, even the normally shorter line from the inside of the attraction. 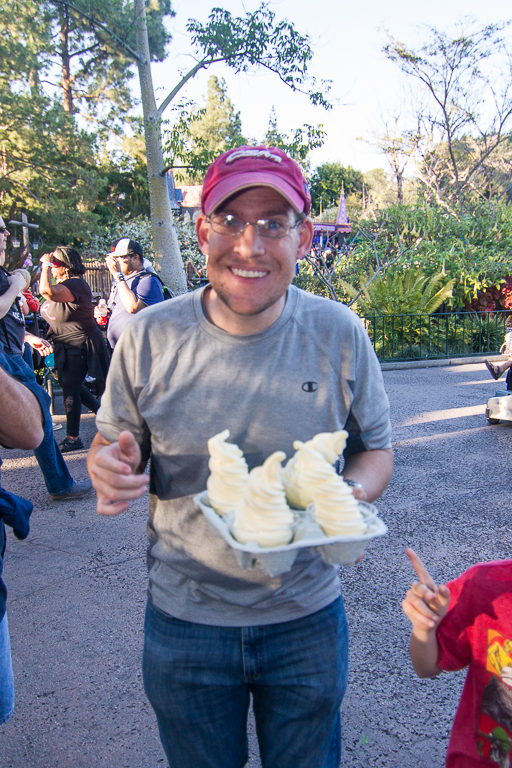 At this point, Alli was getting hungry, so Ian, T, and I took our Dole Whips to a quiet corner of the park while she ate. Jon, Jess and crew all joined the Pirates of the Caribbean. 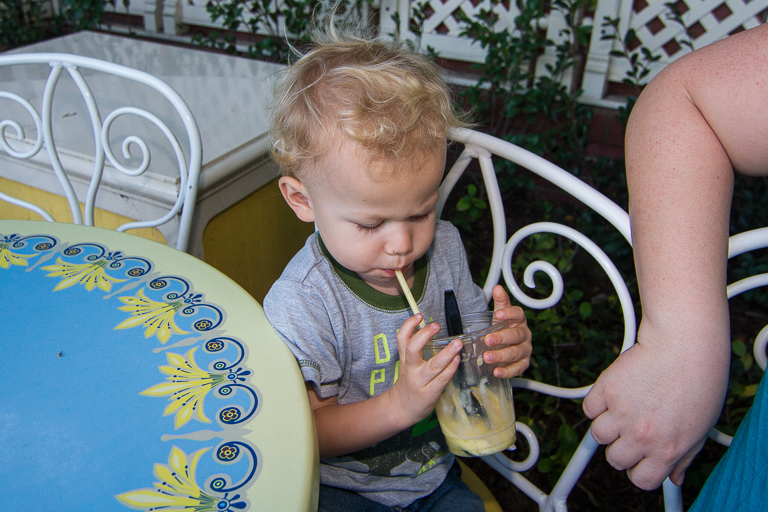 After her snack, Alli was tired. The Ergo is the perfect tool for putting her to sleep, but it only works on me. No matter. I'm fine skipping out on a few rides. Everyone bounced over to Winnie the Pooh. 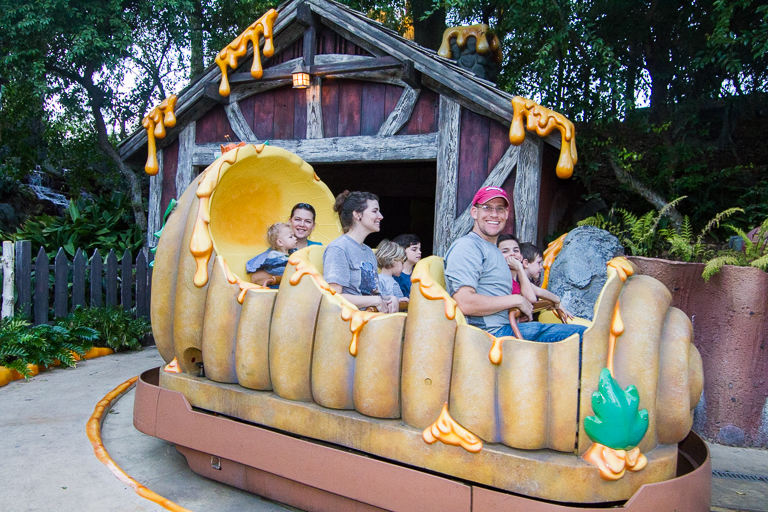 Indiana Jones has been down a lot of the day, and Jon had fast passes for it. Even though T gets motion sick, Indy is actually doable for her. Surprisingly, even though his brothers said it was scary, Isaac was excited to join Theresa and Jess for a journey into the Forbidden Temple. 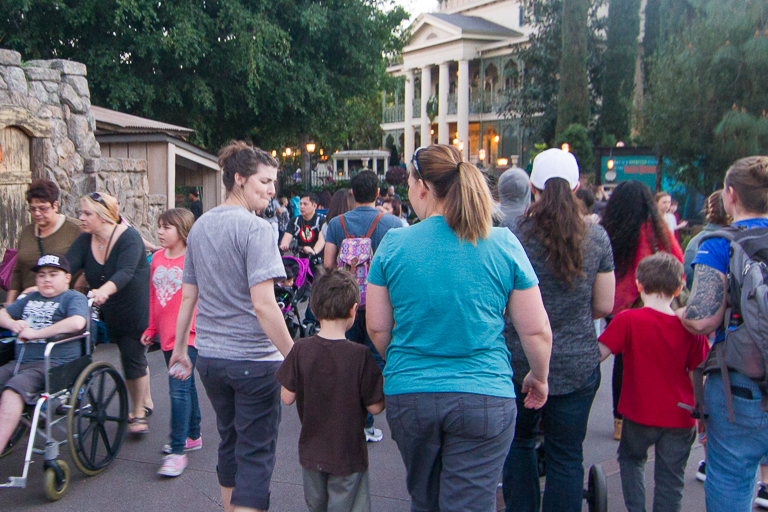 Snack time for the rest of us! It started with churros. 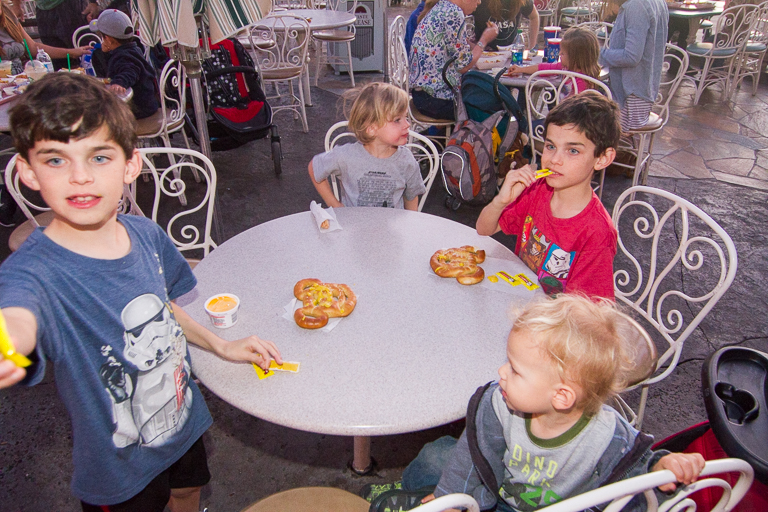 Then graduated on to pretzels. 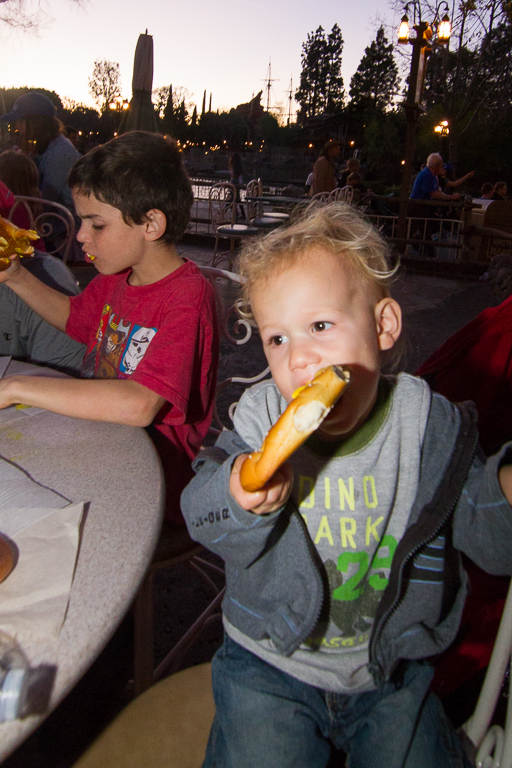 When we were walking back to Winnie the Pooh, two of the kids saw the logs sliding 50 feet down Chickapin Hill on Splash Mountain and said "I want to ride that!"

Isaac and Emma are super brave! With no line, we walked right up and hopped in our log. And then we were held there for 3-4 minutes. Nerves were tested while we sat there waiting, but soon enough we were on our way. 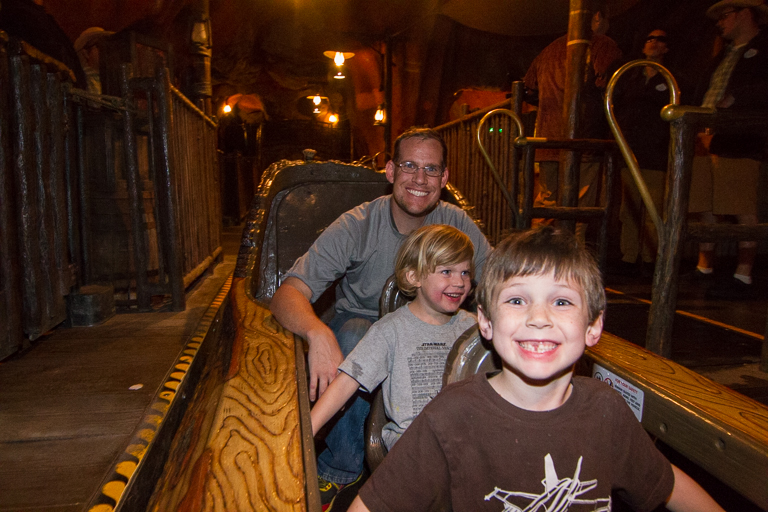 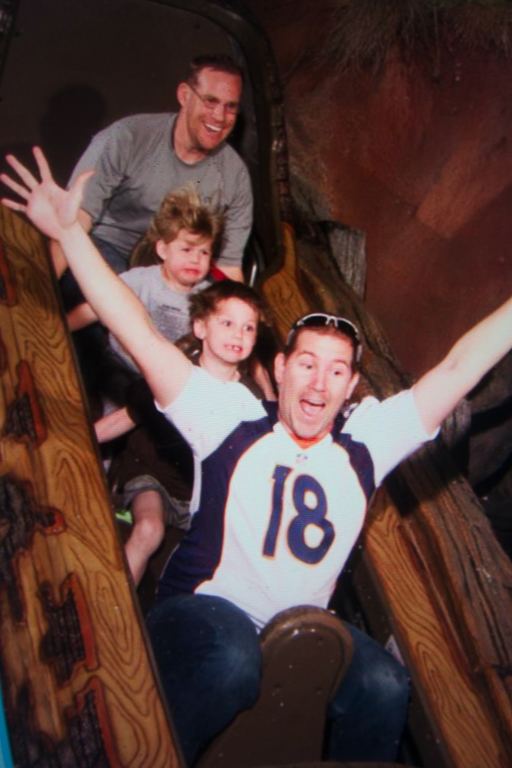 Love it! A little scared, but still having fun. 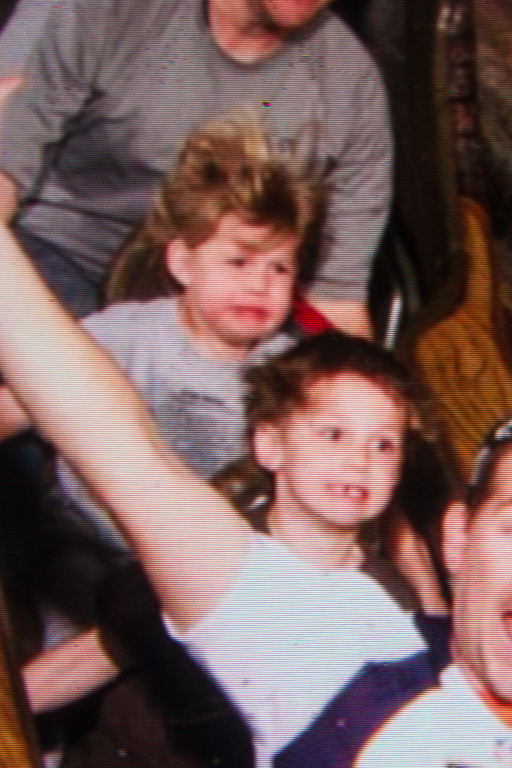 And they were so happy with themselves when we made it to the bottom, saying "Again, again!" 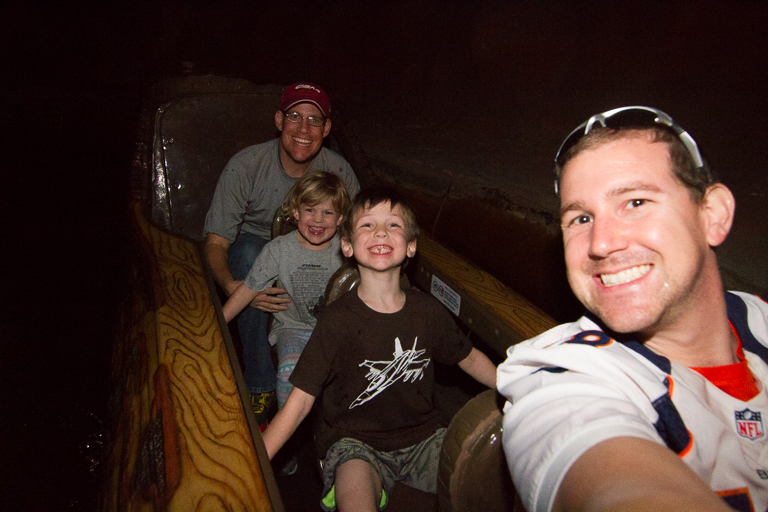 I'd love to go again, but it's time for dinner. 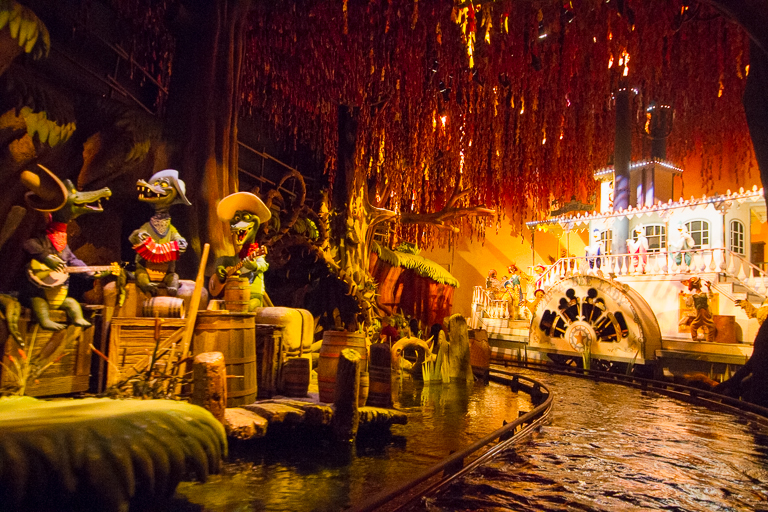 More Star Wars! Our taste buds took us to the Galactic Grill. 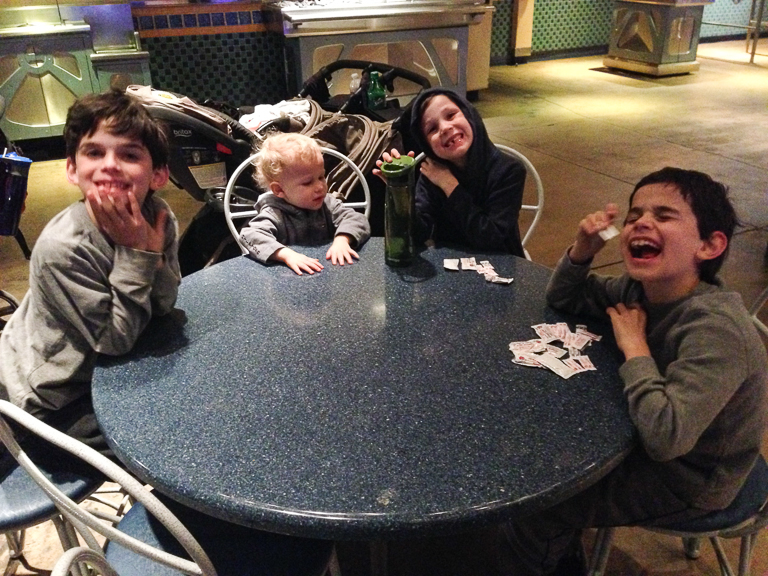 Each of the kids enjoyed a Han Solo in Carbonite meal box. We dined on the First Order Burger (which we all felt was a little dry), and the kids all said "mine's missing cheese!" Hmm, guess cheese doesn't come on these burgers. I thought both of the frozen drinks were pretty delicious. You've got to love the light-up Death Star and Millennium Falcon. 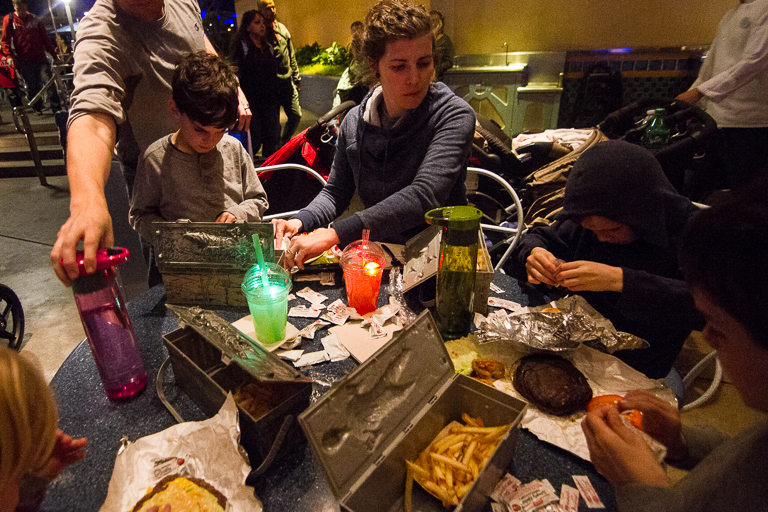 I was excited to try this awesome looking dessert. The Darth Pastry has received some pretty good reviews. I was actually a little disappointed with it. I guess I'm not sure what the shelf-life is on these, but it was really soggy. I liked the spiciness of the chocolate filling, but the texture of the pastry just messed the whole thing up for me. 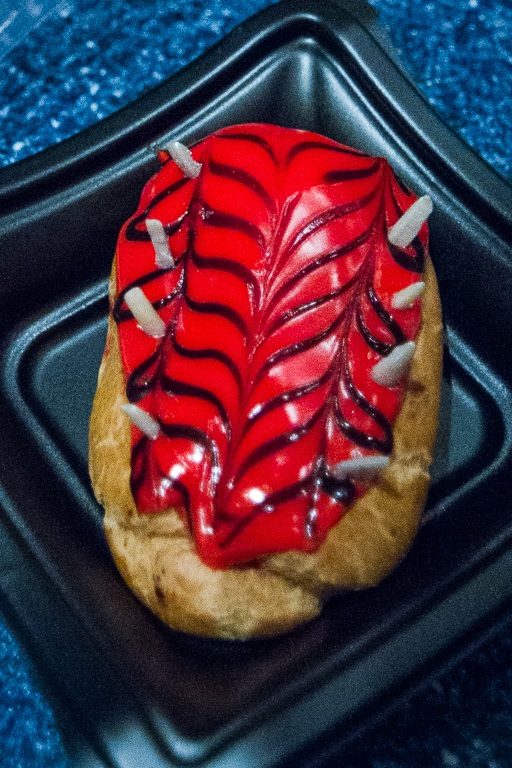 After dinner, it was time for my family to head to bed. We said our goodbyes and drove home to put the kids to bed.
The next day, Jon Jess and everyone would head back home, but not before going with us to the Long Beach Belmont Shore Chocolate Festival!
Posted by Joe at 11:50 PM