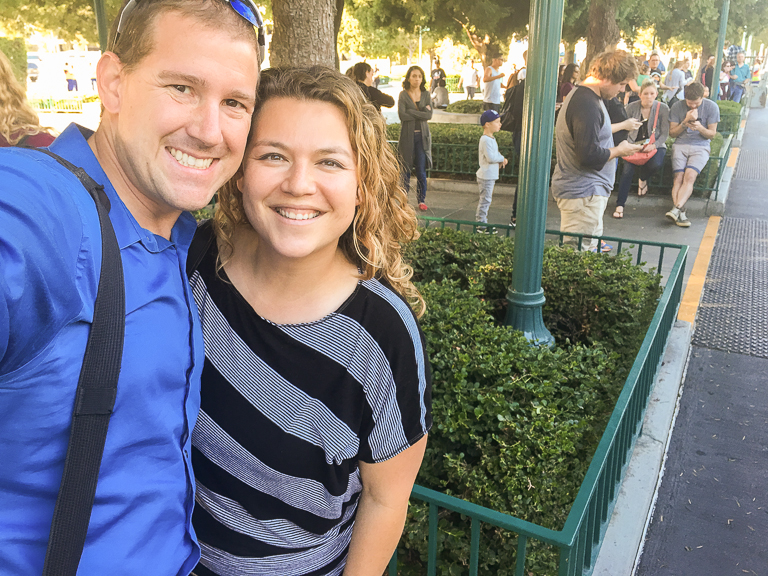 And tonight we're also dining with some fellow Disney friends who are visiting from Arizona. Go ahead Kelly, push the button to get us in! 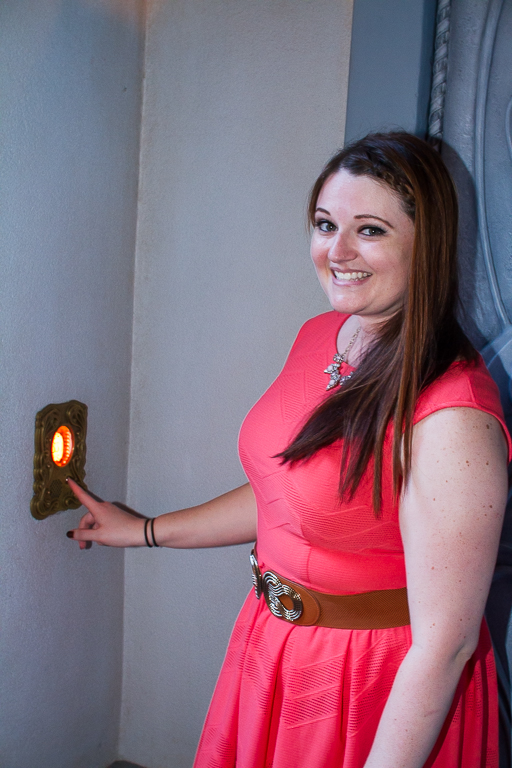 Upon entering, there are complimentary refreshments. Theresa and I were both very happy to see the Spiced Apple Cider back for Fall. Forget Pumpkin Spice everything. This is my favorite Fall beverage. 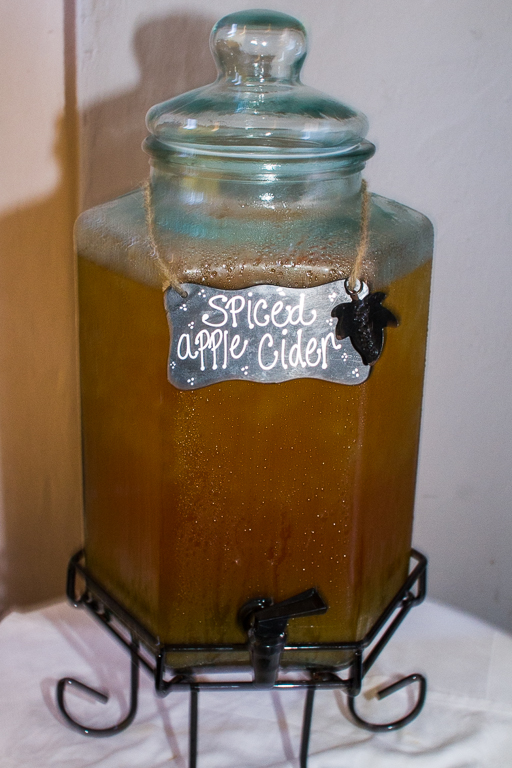 As fortune would have it, the member who made reservations for me also happened to be visiting the club. That means that we also get to visit the Members Only Salon Nouveau Lounge section of Club 33 as well! 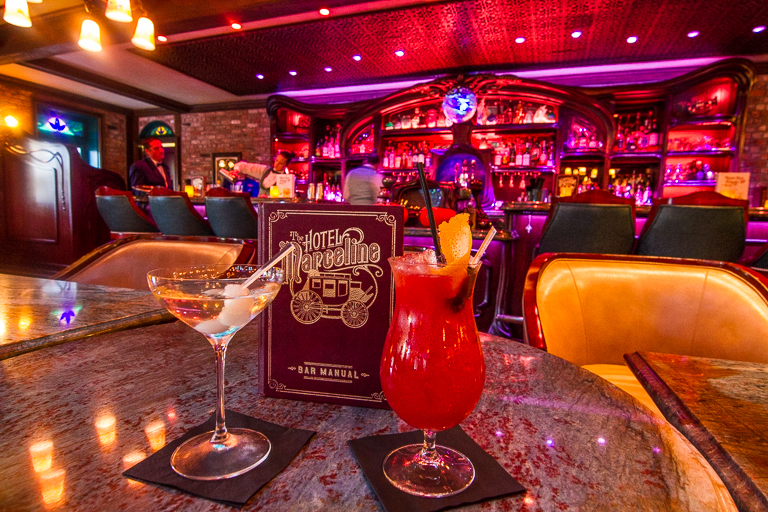 Sean and Kelly sitting at the bar. 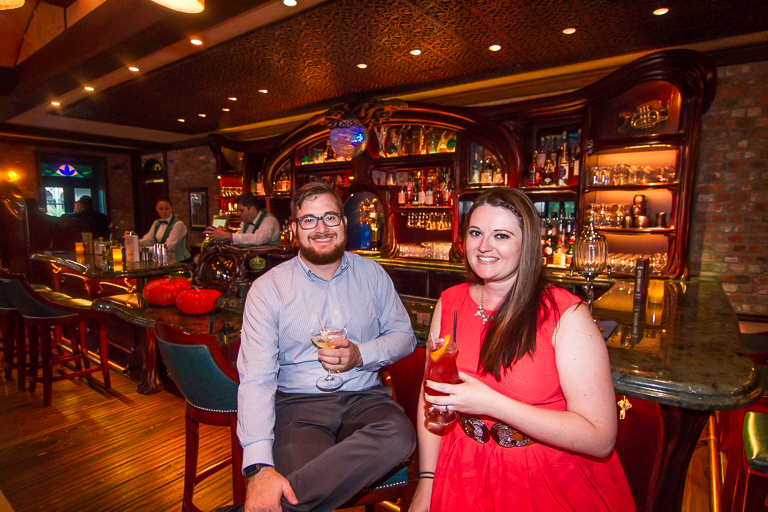 The Club is subtly getting into the Fall spirit. These Cinderella Pumpkin aren't carved. No. Instead, they've been scarred when they were smaller, such that when they grew bigger, they'd have this design on them. Cool! 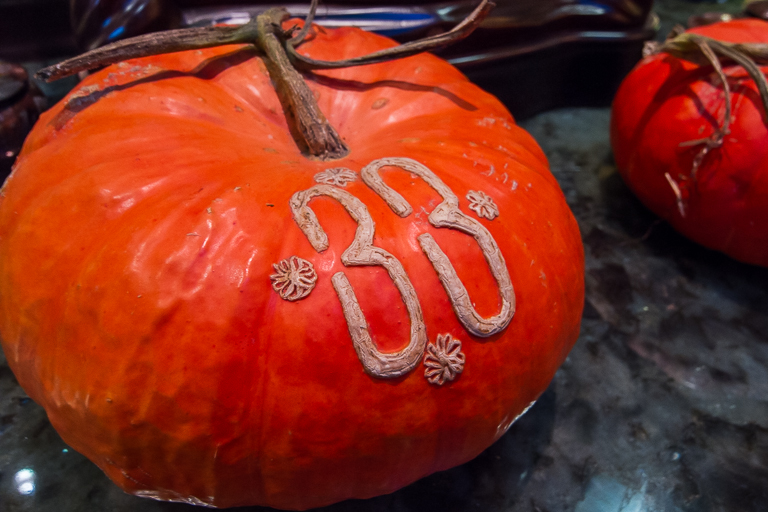 I've had some typical drinks here. Lemonades, rose sodas, apple/maple juices. Tonight I try something different. The non-alcoholic Yacht Bar Sour, made with White Grape, Lime, Honey, Egg Whites, and Ground Pepper. It was... interesting. As Sean indicated, it did not smell all that appetizing. Probably since all you're smelling is egg whites and pepper. Taste-wise, the juice underneath the foam was good, but I won't be ordering one of these again. 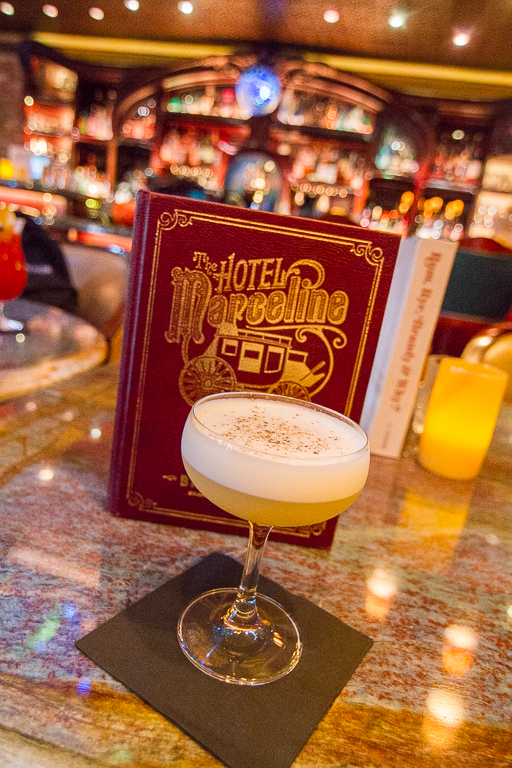 At 6pm, a Club 33 Hostess came to the Salon and informed us that our table was ready. She collected our drinks and led us into the Grand Salon. 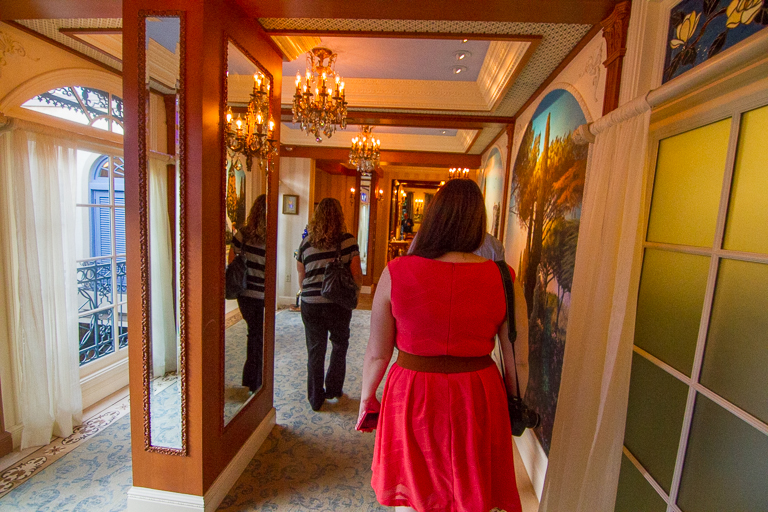 The Club 33 charger plates, that sit on the table before your meal arrives. 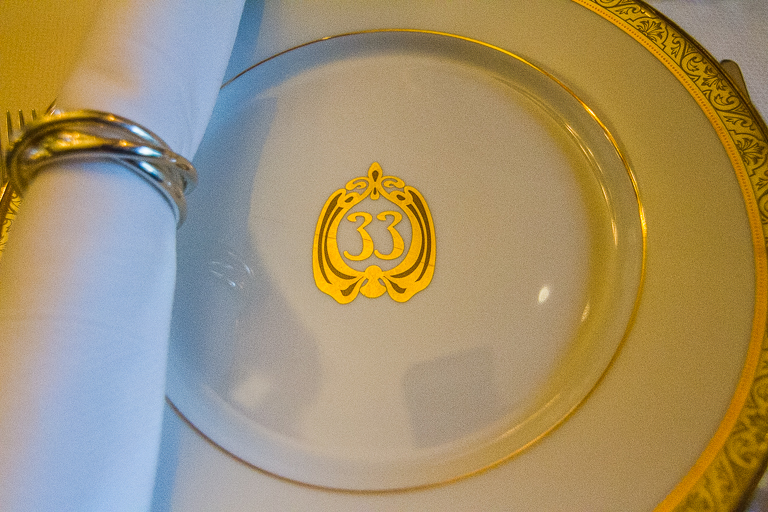 Tonight's Dinner Menu. You can choose either the 5 course meal for $105, or the 6 course meal for $120. Our server did tell us that if you didn't like a particular course, you could instead do 2 items from another course. No surprise though that there were exceptions. My idea of 2 orders of steak, followed by 2 orders of lamb, then dessert was met with chuckles. 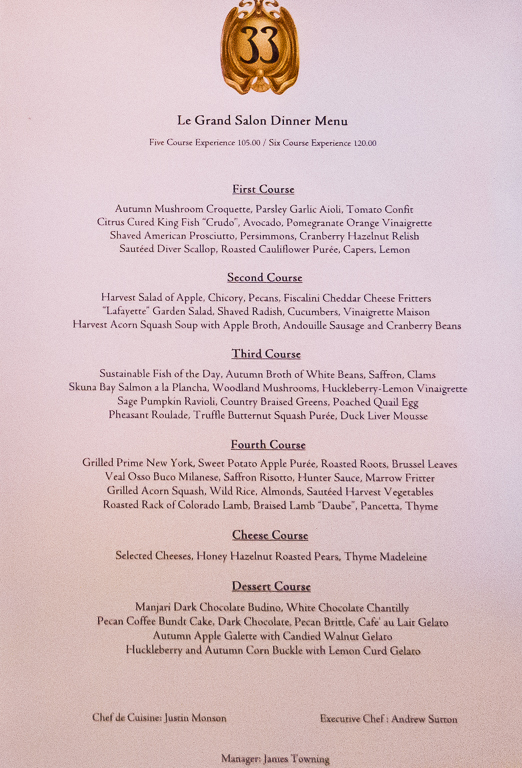 Seeing my camera bag on the floor, one of the hostesses brought over a stool to place my bags on while we were dining. 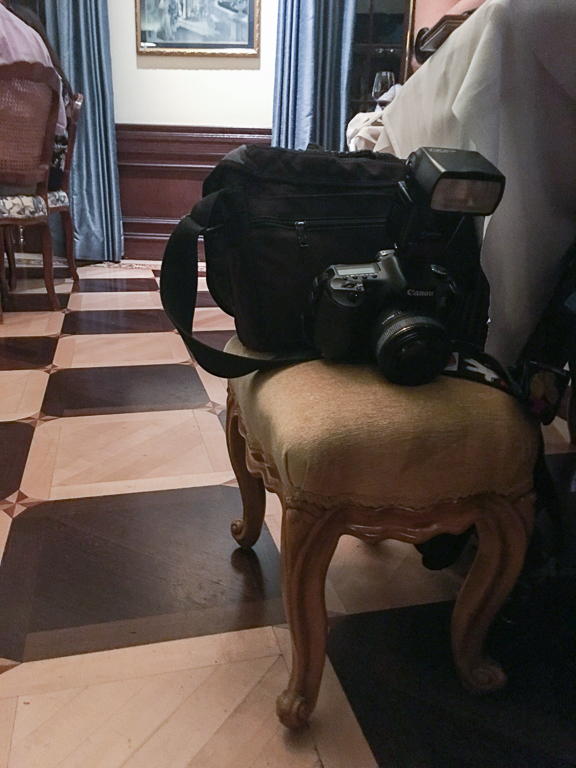 After placing our orders, it was time to explore a little bit. Walking out onto one of the 2 accessible balconies before it gets too dark to take a few photos. The noise difference between the inside of the club and the balcony is abrupt. Inside the club everything is fairly quiet and very well sound-proofed from the rest of the park. Outside on the balcony, looking at all the park-goers. It's amazing how few people look up. 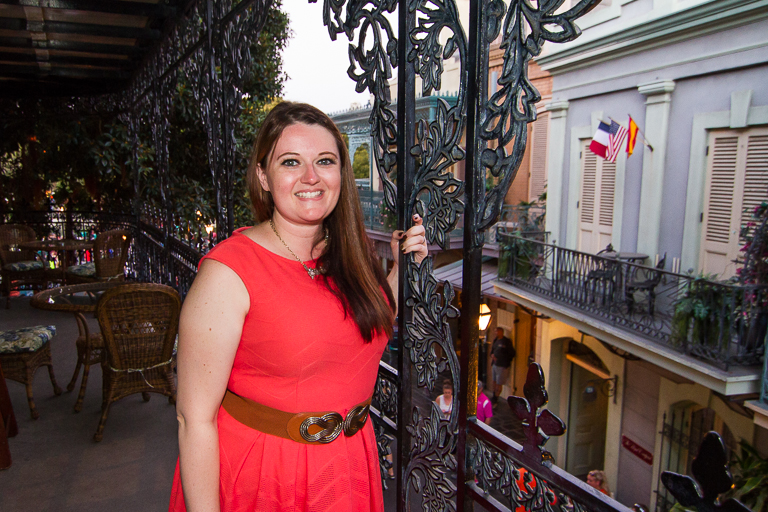 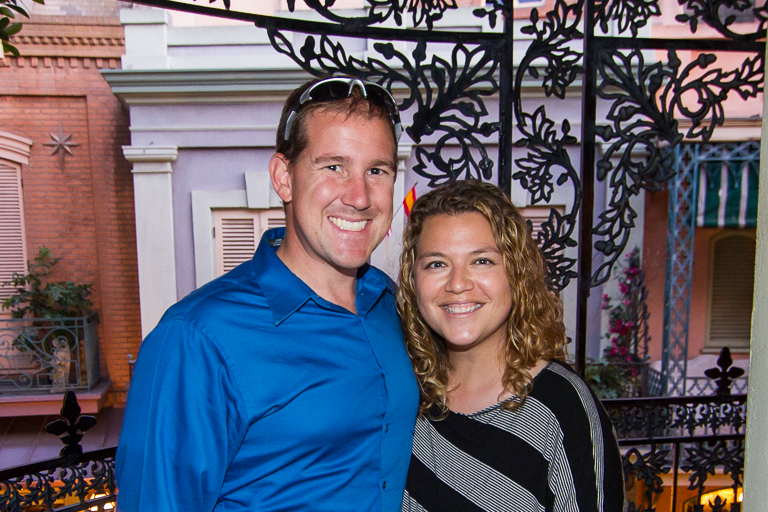 Upon returning to our seats, the table was presented with an amuse bouche, compliments of the chef. Before every course, the server explains what we'll be enjoying. They say it really fast though, and I didn't write it down quick enough. This was a squab, duck, and pheasant dish bite-size hors d'œuvre . Everyone at the table enjoyed it. 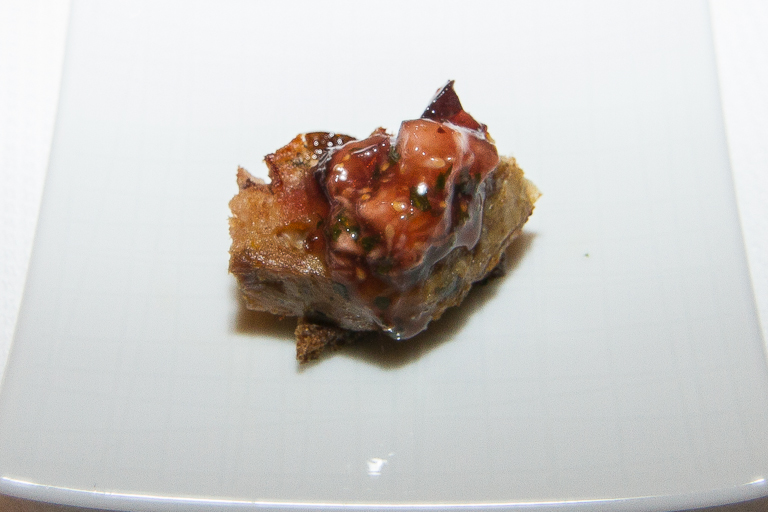 Before our first course came out, the four of us looked out the other balcony. I can tell you that this balcony smells a lot better than the other side. Here you're smelling all the food coming from the Cafe Orleans. On the other balcony, the strongest smell is the water from Pirates of the Caribbean. 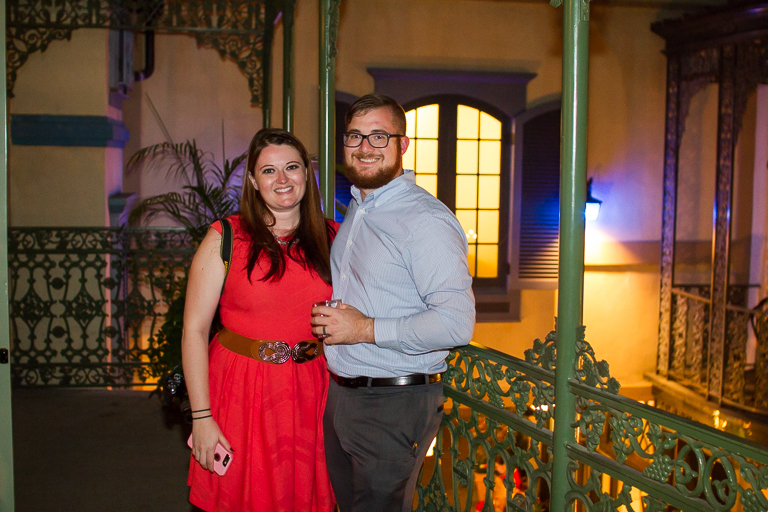 Nearly 1:15 after we were seated, the first course comes out.
Not being a fan of seafood or mushrooms, I had an easy choice.
After removing the decorative green stuff, the Shaved American Prosciutto, Persimmons, Cranberry Hazelnut Relish was quite good. 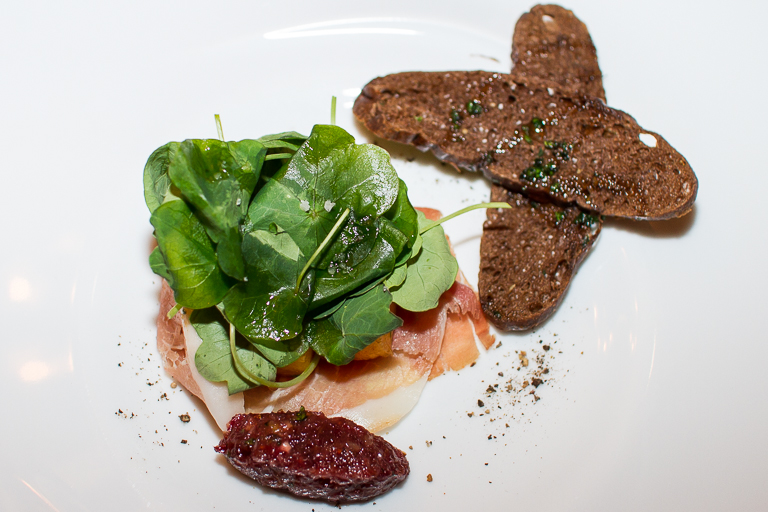 Being a fan of mushrooms, Theresa had the Autumn Mushroom Croquette, Parsley Garlic Aioli, Tomato Confit. 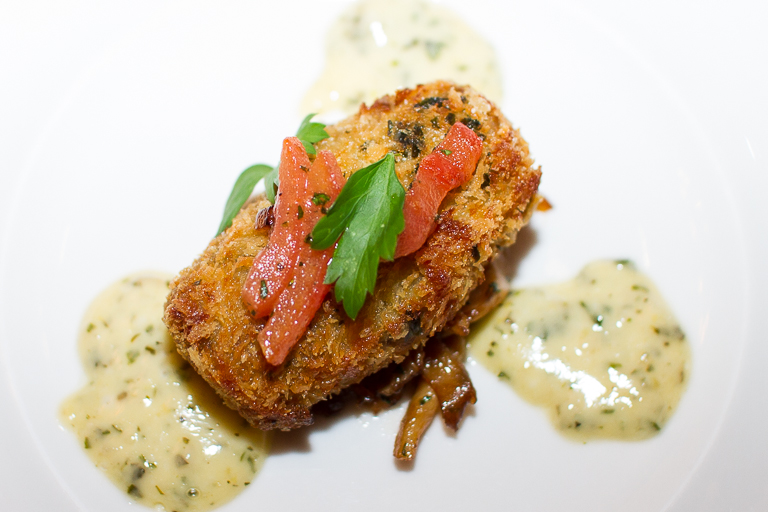 Time for the second course.
Though small, the Harvest Acorn Squash Soup with Apple Broth, Andouille Sausage and Cranberry Beans was delicious. I especially enjoyed the andouille sausage and thick broth. 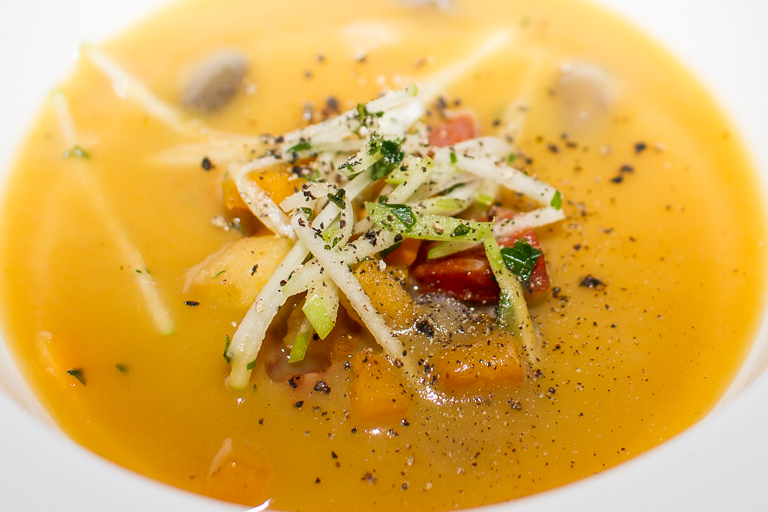 The "Lafayette" Garden Salad, Shaved Radish, Cucumbers, Vinaigrette Maison was a swing and a miss for Theresa. She picked at a couple things, but it was mostly untouched when our server returned to collect the plates. 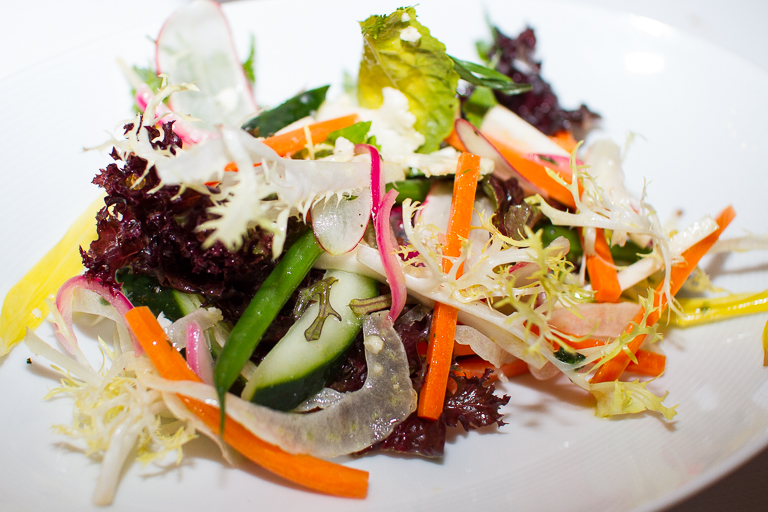 Third course
I had a fantastic Sage Pumpkin Ravioli, Country Braised Greens, Poached Quail Egg. On top was also a small bit of bacon, which added a very nice savory element to an already rich dish. 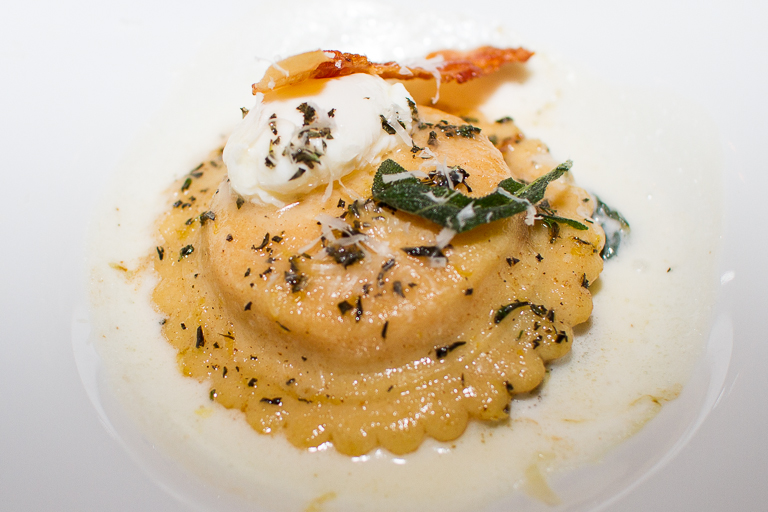 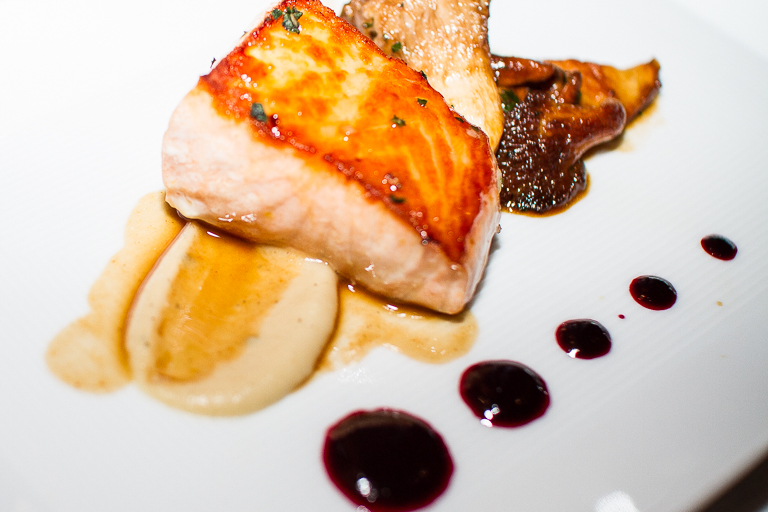 While there were 4 options for the Fourth Course, Thereas and I both found it difficult to stray from the Grilled Prime New York, Sweet Potato Apple Puree, Roasted Roots, Brussel Leaves. The meat is great of course, but the sauce really make it fantastic. I even ate my carrot and turnip. 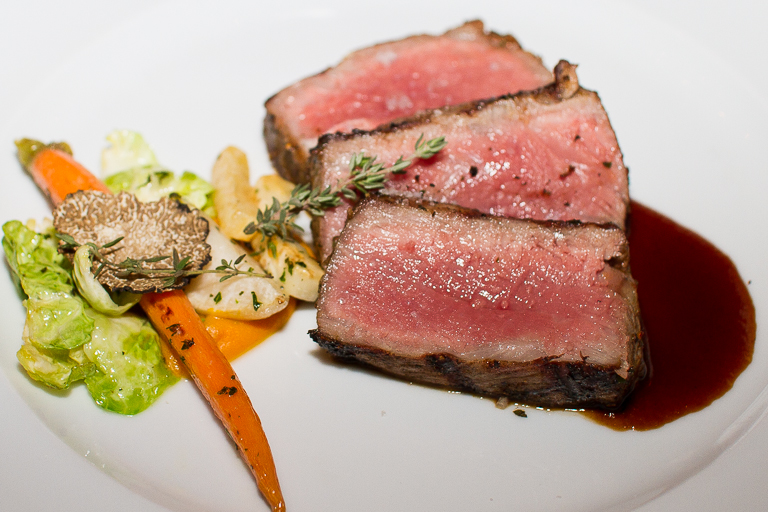 Between Theresa and I, we split a cheese course. There were a variety of cheeses meant to be paired with complementary items. A Thyme Madeline with Goat Cheese, Honey Comb with Pickled Pears, Aged Cheddar with On the Vine Raisins, Blue Cheese with Crostini, Nut Brittle. The items here were hit and miss. Loved the cheddar/raisin, nut brittle, and honey comb. Even the blue cheese was pretty good. 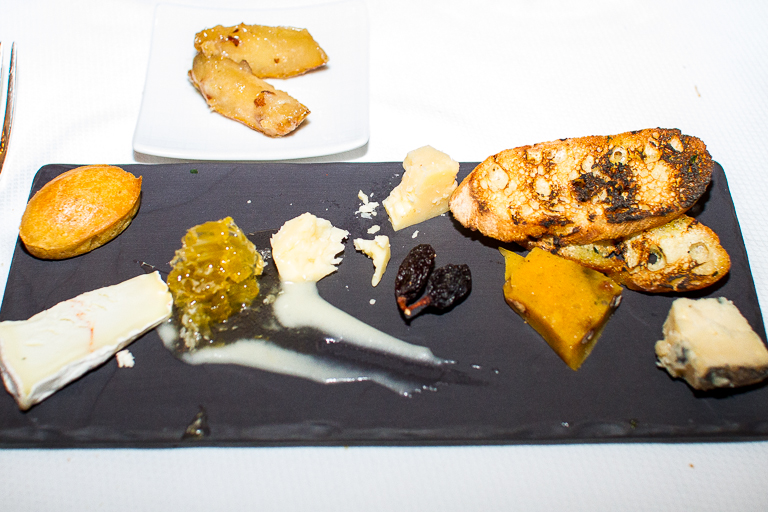 Time for dessert!
There's some delicious options today, but I was really sad to see that the monkey bread was no longer on the menu. Instead I ordered the Huckleberry and Autumn Corn Buckle with Lemon Curd Gelato. I didn't know what a "buckle" was, but it's a kind of a muffin. The corn flavor comes through really strong. It wasn't very sweet for a dessert, but still good. 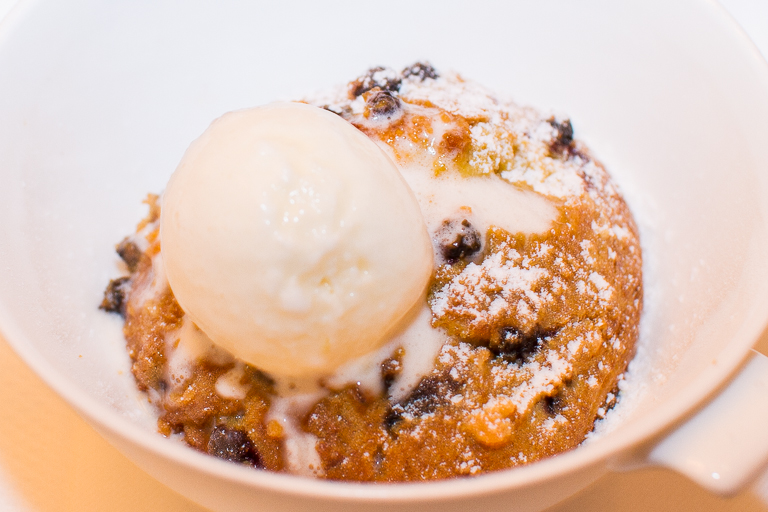 Theresa hit it out of the park with her Autumn Apple Galette with Candied Walnut Gelato. Flaky and delicious with giant sugar crystals. She chose wisely. 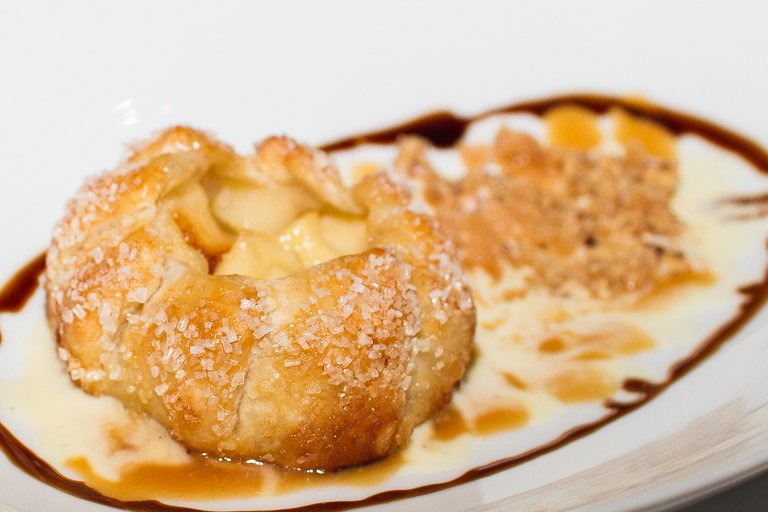 After spending over 4 hours in the club, it was time to go. 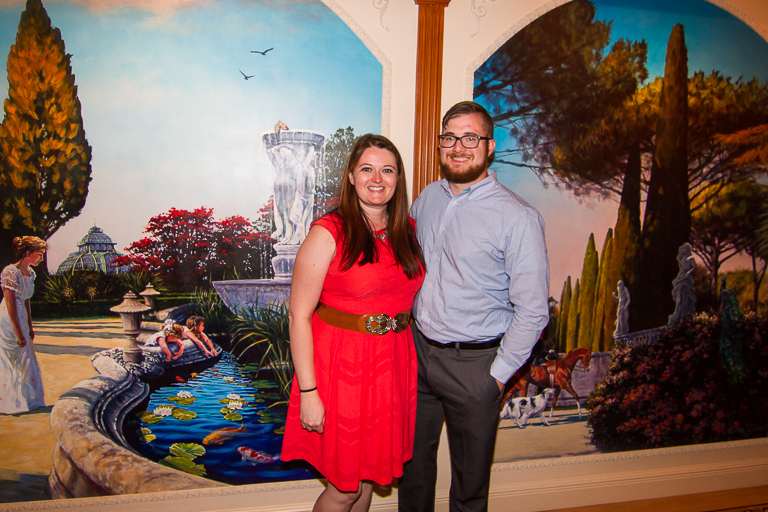 But you can't leave without stopping by the merchandise cabinet right? Kelly and Sean got a lot of great stuff. Theresa and I got a really detailed Club 33 Christmas Ornament, modeled after the old Club 33 entrance door. I'll post a photo of it shortly. 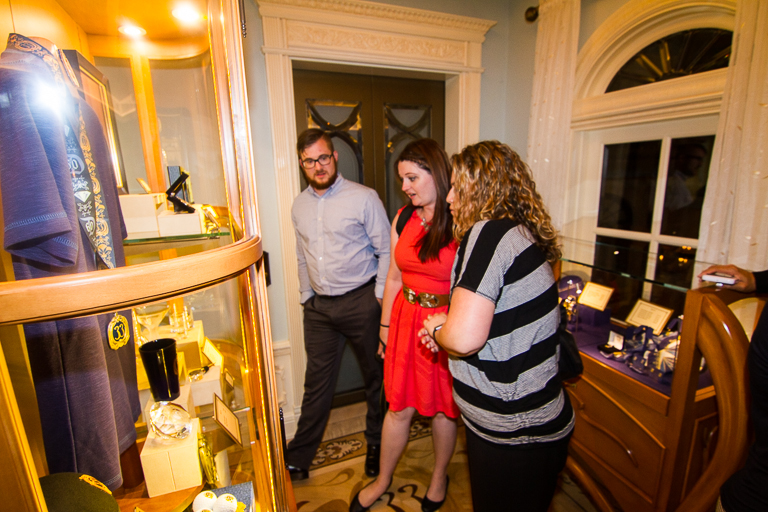 We had a fun time hanging out with our friends and we all left stuffed after enjoying our 6 course meals. A very big Thank You to our member friends for making this all happen! 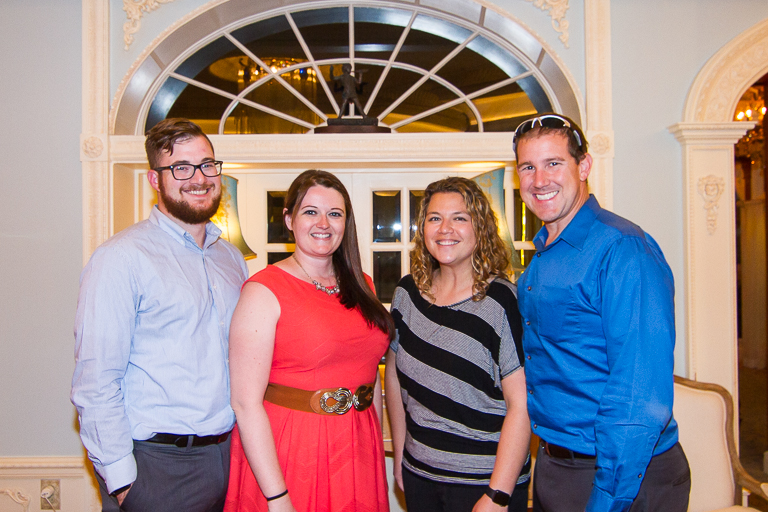