I love trying all sorts of new chip flavors, but my brother Patrick might just love them a little more. On a recent visit to Colorado, he surprised me with 9 flavors to try! 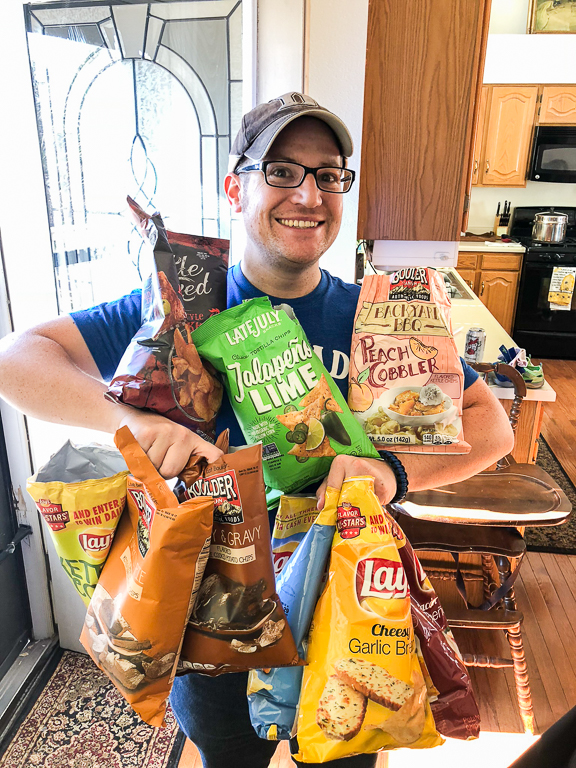 The kids are really into trying all the chips too. Alli likes them based on the color of the bag. Ian doesn't like anything too spicy and prefers the sweeter ones. 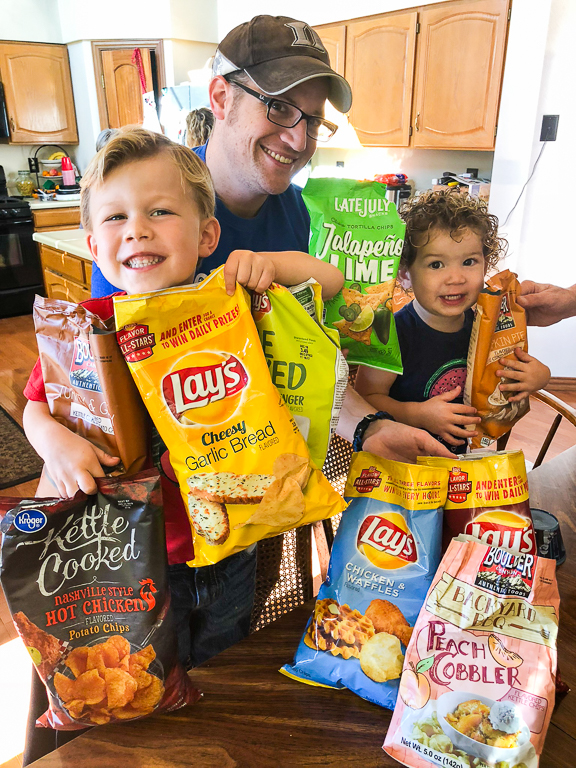 On the bottom row, we have multiple chip flavors returning from past years.
In 2013, we were introduced to Chicken and Waffles and Cheesy Garlic Bread. 2014 brought Wasabi Ginger kettle chips. In 2017, Bacon Wrapped Jalapeño Poppers did not make the 3 finalist, but this semi-finalist was picked up as a Walmart exclusive. 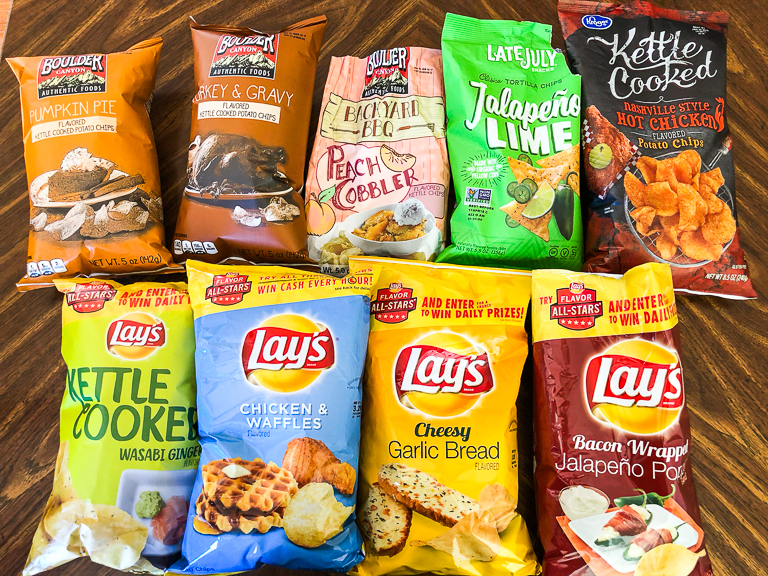 So how were they? Well.

Boulder Canyon Pumpkin Pie - A tasty sweet chip. It tasted like pumpkin pie spice. More like a dessert chip.
Boulder Canyon Turkey & Gravy - It was a savory chip. The dominant flavor was the gravy, and the sage really came through. Not my favorite.
Boulder Canyon Peach Cobbler - Wow, this was a real surprise. I wasn't expecting much from this chip, but it was one of my favorites! The peach flavor really came through and it was really sweet.
Late July Jalapeño Lime - This was a corn chip, so it had that going against it to start. It was just okay.
Kroger Nashville Style Hot Chicken - Everyone who tried it was having a hard time tasting anything spicy or chickeny with these chips.
Lay's Wasabi Ginger - My brother Patrick's favorite. They're tasty to be sure. Evident because they won the contest back in 2014.
Lay's Chicken & Waffles - Yum! My favorite chip and what got me into all these chip reviews in the first place. Back in 2013 I saw these on the shelf and started looking to see what else existed.
Lay's Cheesy Garlic Bread - Cheesy and Garlicky. Mmm. Definitely a tasty chip. No wonder it won the contest in 2013.
Lay's Bacon Wrapped Jalapeño Poppers - It was good, though the bacon flavor seemed a little odd. I didn't taste the cream cheese, but the jalapeño spice was there. 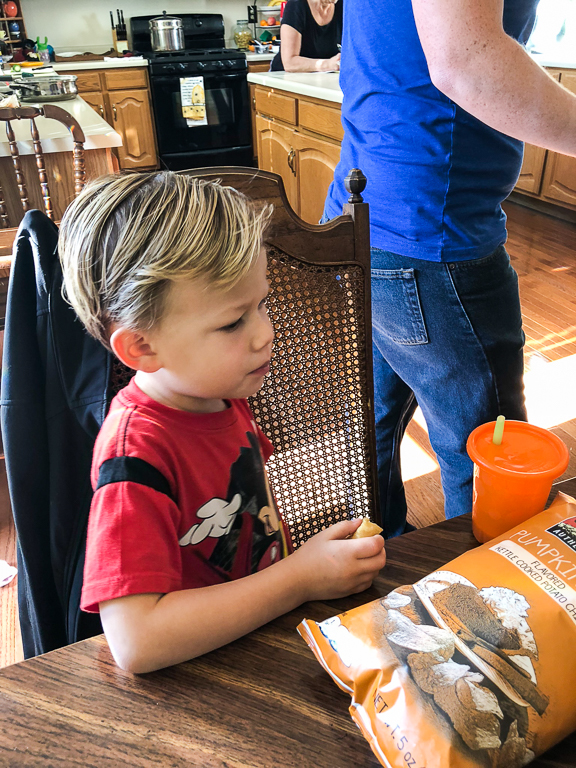 I'll always love the Chicken and Waffle chips. Savory and sweet with a maple flavor, these are the best. I was happy they were brought back as an All-Star flavor and I got to try them again. 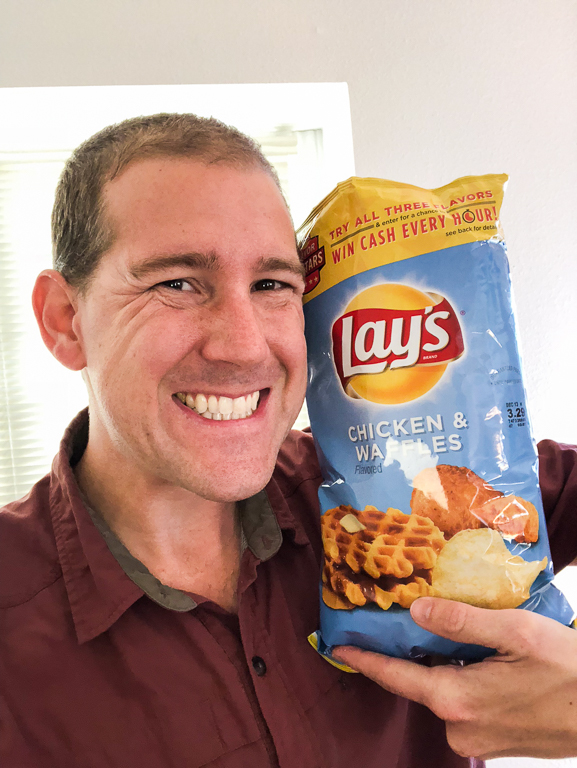 Along with the chips, Patrick also picked up some of the holiday Pepsi flavors.

Mtn Dew Holiday Brew - A mix of regular green Mountain Dew and red Code Red. It matches the colors of Christmas. Since Code Red is cherry flavored Mtn Dew, I'm not sure what the point of mixing it with regular Mtn Dew is. There weren't any other special flavors added, so other than the colors I wouldn't say it's something for the Holidays.
Salted Caramel Pepsi - Isn't caramel a regular flavoring in Pepsi cola? Either way, the taste of caramel is really stepped up for this one. I liked it. 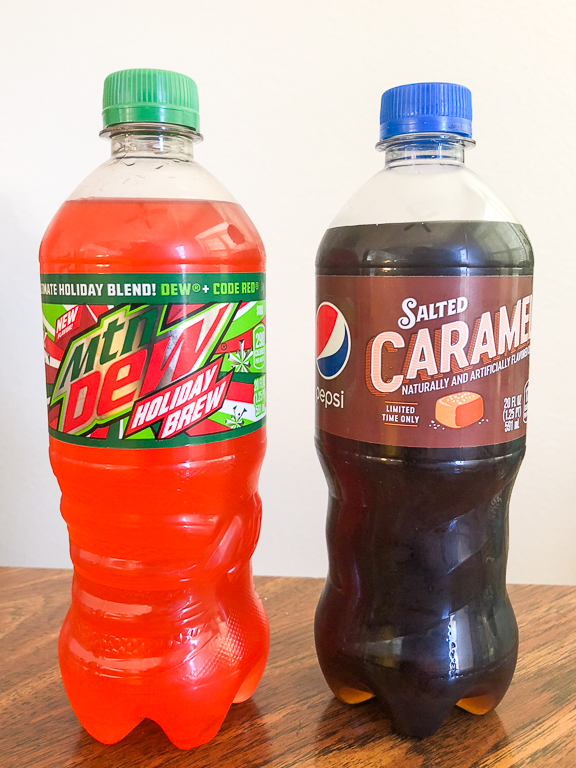 And since we're trying things in batches, why not grab a bunch of Pepperidge Farm cookies.
They're all delicious, especially the Gingerman and Linzer cookies. 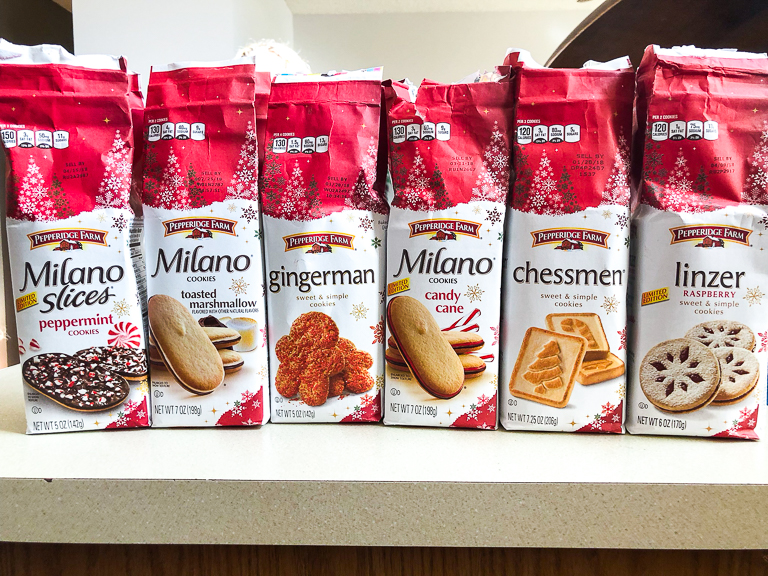