A rainy Thursday afternoon at Disneyland, leading up to a big event

It's a rainy day at Disneyland, but there's a very special event going on here tonight. I'll brave a little rain for that.
I got off work early enough to beat the Los Angeles traffic and made it to Disneyland in good time. Right after I parked the car, the skies opened up and it started pouring. Good thing I brought an umbrella. The entrances to stores and restaurants were crowded with people who must have assumed So Cal is always warm and sunny. 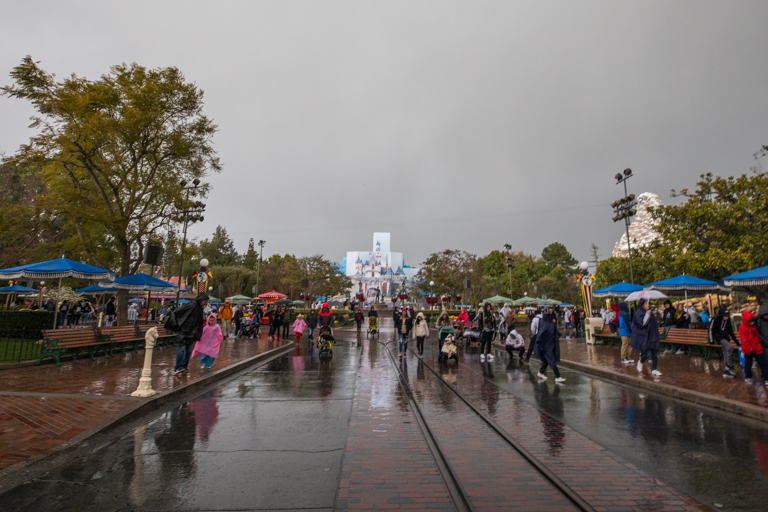 The printed tarp covering the castle assumes blue skies too. 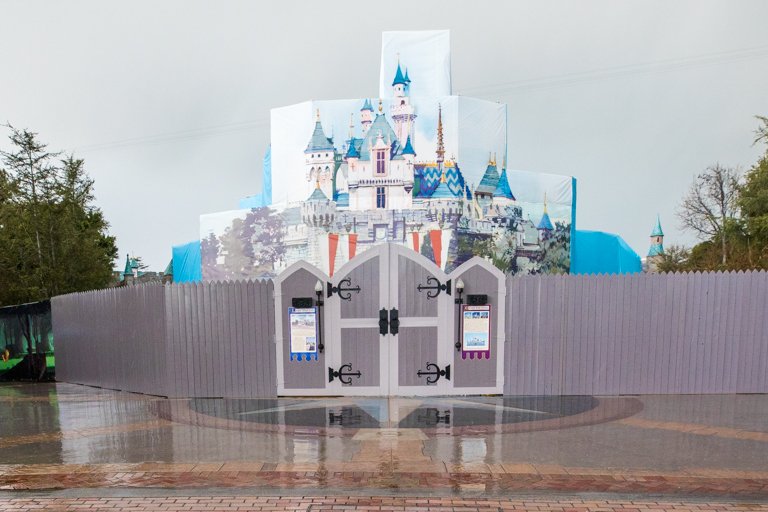 With the rain still coming down, I was trying to think what rides would be good. Not a ride that's outdoors, like small world, because you'll be exposed for a while and can't use an umbrella. Everyone seemed to think the Enchanted Tiki Room would be good. The line backed out past the entrance and the pre-show hadn't even started. 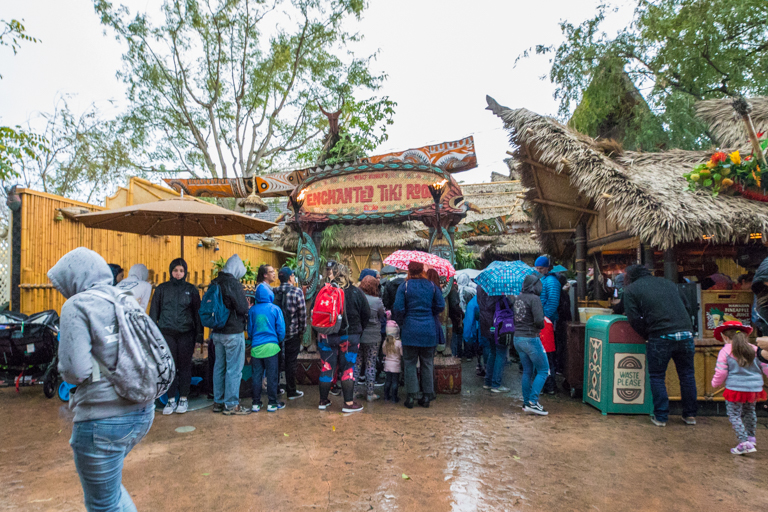 I know a place that is sure not to be busy.
The Tomorrowland Theater has been showing a preview of Ralph Breaks the Internet since Nov 9th. The movie came out on Nov 22nd, but here it is Feb 22nd and we're still getting a "preview" of a movie that I've seen in theaters twice already. It will be dry though, so it has that going for it. 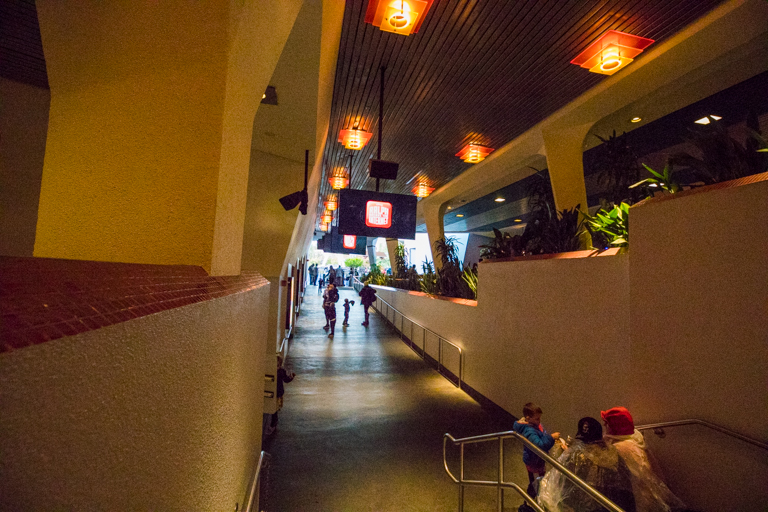 Inside I did like how there were new lines that were recorded by the cast. And the 3D in the theater worked well. 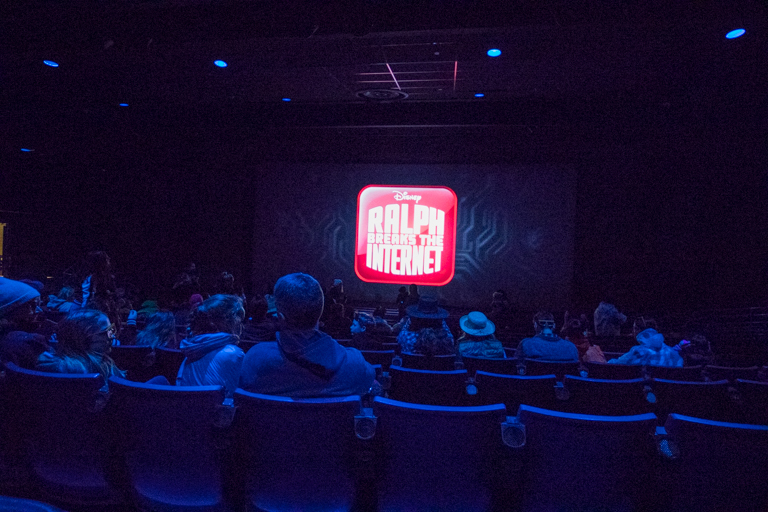 I made my way over to DCA to another spot I knew would be nice and dry. I love the lobby of the Animation Building. And so do a ton of other people apparently. 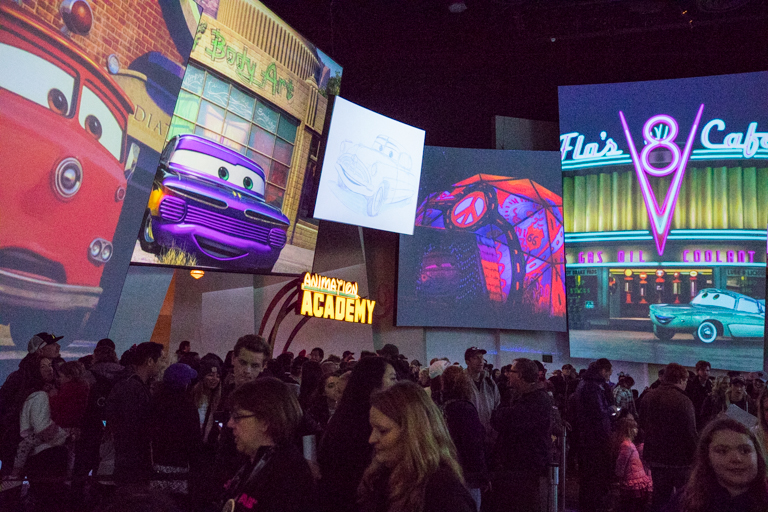 In the mean time, Jacob arrived. Nice hat! It will make more sense in a little while. 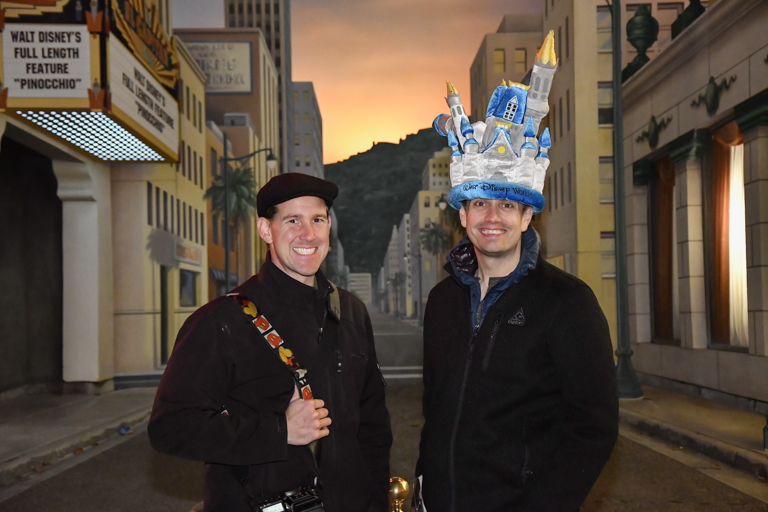 Together we rode the Incredicoaster and let me tell you, it was freezing, almost literally! Temperatures were in the low 40s, but with the wind blowing by you it feels much colder. Time for dinner, and I'm hungry! 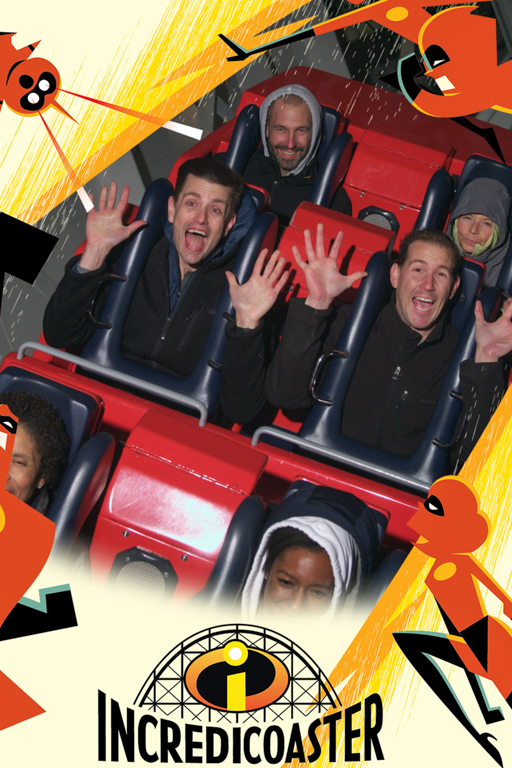 I've been wanting this all day. The Napa Rose has some of the best food anywhere here at the Disneyland Resort. Reservations are difficult to come by. Seats at the bar are in high demand too. But carry-out is an option that I have taken advantage of frequently. After placing my order with the bartender, I had my food and was out the door 15 minutes later. 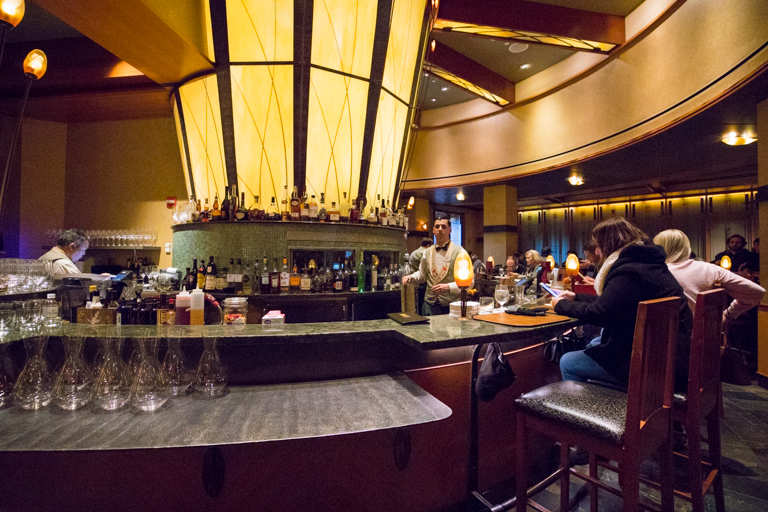 Jacob found us a spot in front of the fireplace at the Grand Californian hotel and we enjoyed our meal. 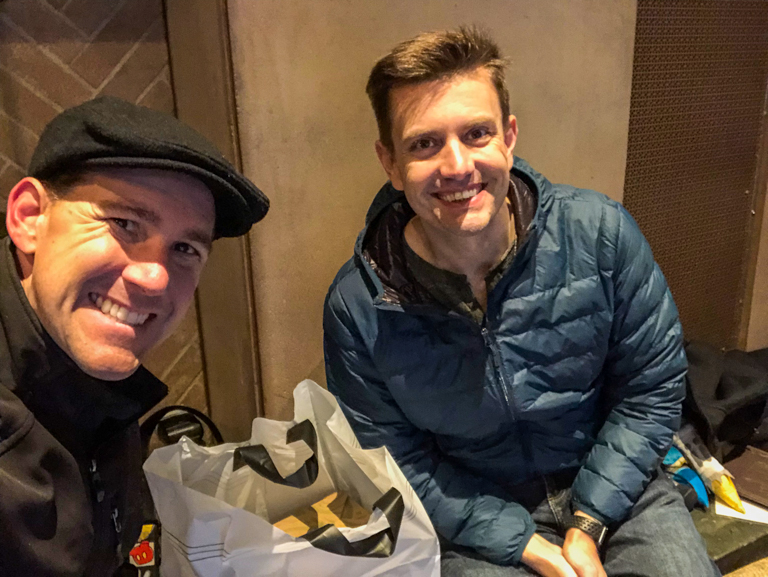 The Signature Pizzetta is small and costs $18, but the flavor is amazing. Start with smoked prosciutto, then add red flame grapes, caramelized onion, and finish with cambozola cheese. Delicious. 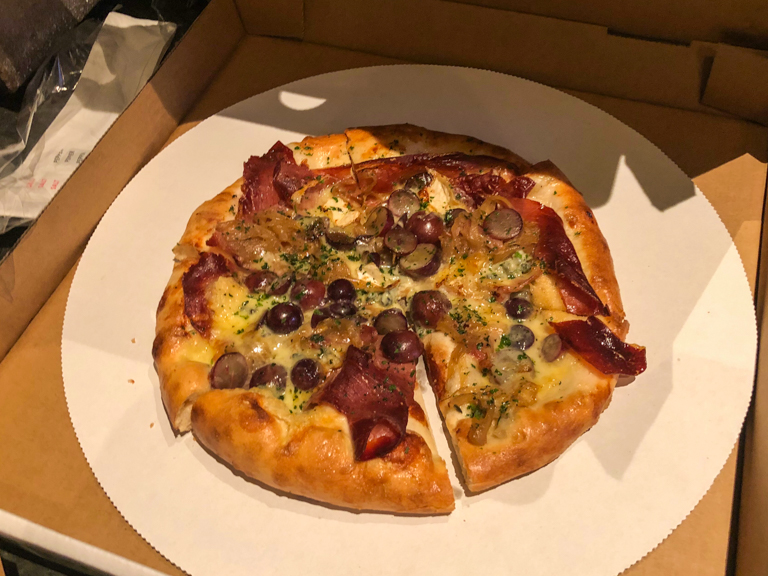 After dinner a warm drink sounded great. Walking into the Starbucks in the Fiddler, Fifer, and Practical Pig cafe, the line was longer than I've ever seen it. With no particular place to go, Jacob said that he bet we could do a mobile order pickup from the Downtown Disney Starbucks and make it back before we even got to the front of this line. 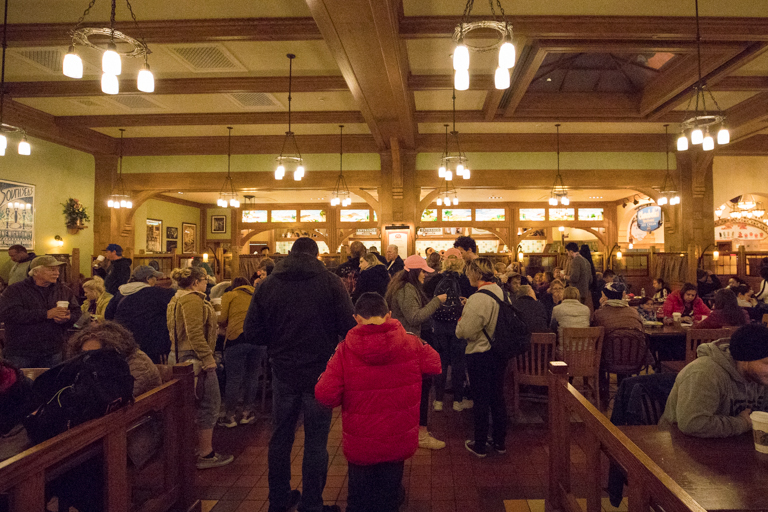 Off we went! Bypassing the long line to order here as well. 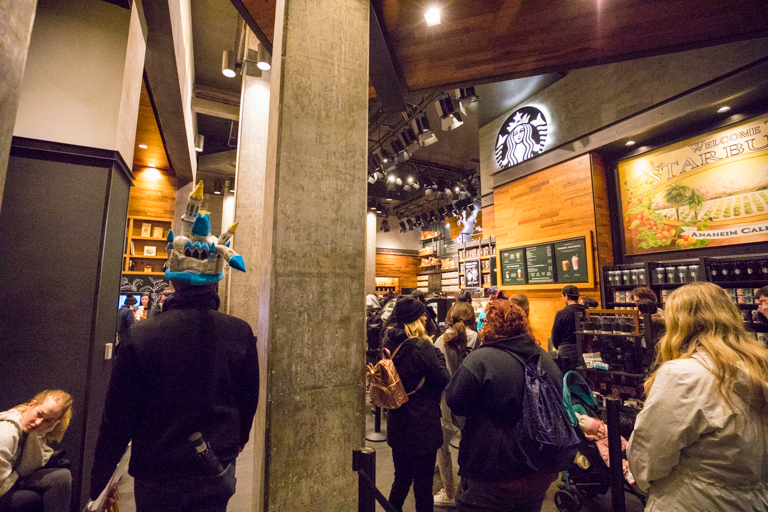 We walked up to the counter and had our drinks a short time later! 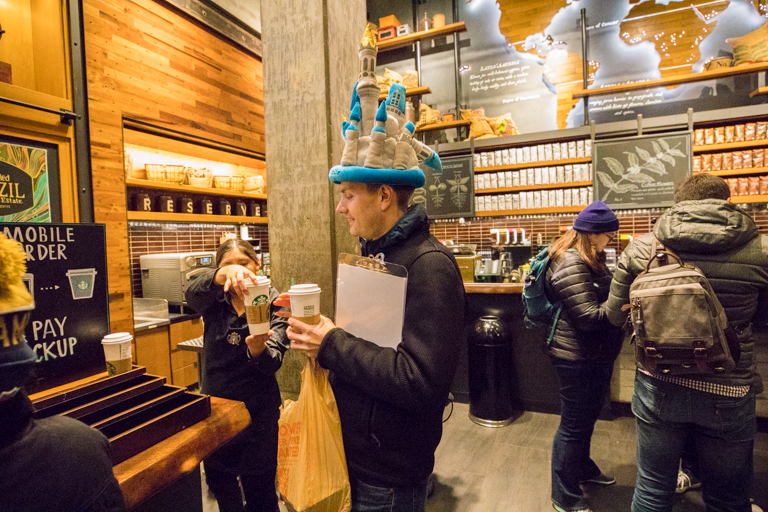 It's nearly time to get this big event started! Let's go!
Posted by Joe at 5:00 PM