In celebration of Mickey's 90th birthday, a giant cake showed up in the lobby of the Disney's Grand Californian Hotel sometime around March 21st. The Disney bakers have been keeping busy! There was a giant Halloween Pump-"cake" patch in October. And of course the now traditional "Grand" Gingerbread house for Christmas.
Though this is the smallest of the bunch, I'd say it's the cutest. In the following pictures we'll look at all the details. 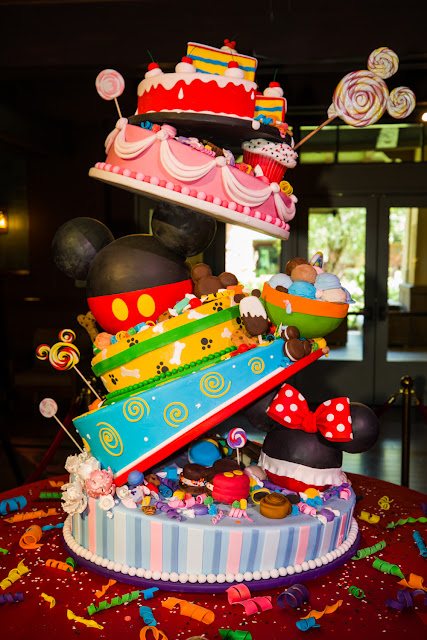 Should you want to make your own celebration cake, you'll need 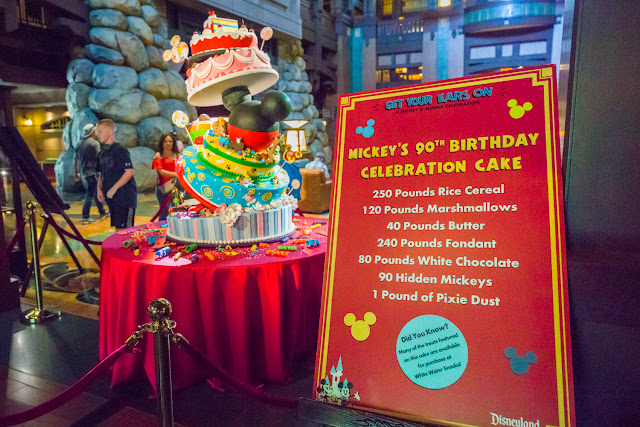 To aid in your quest though, I'll change up the photos a little bit. Normally I limit the size of the photos on my site to help everything load faster. This time though, I'll post them at nearly double the resolution so you can pick out the fine details. Just click on the photo for the larger version.

Let's take a walk around the cake first. From the right side. 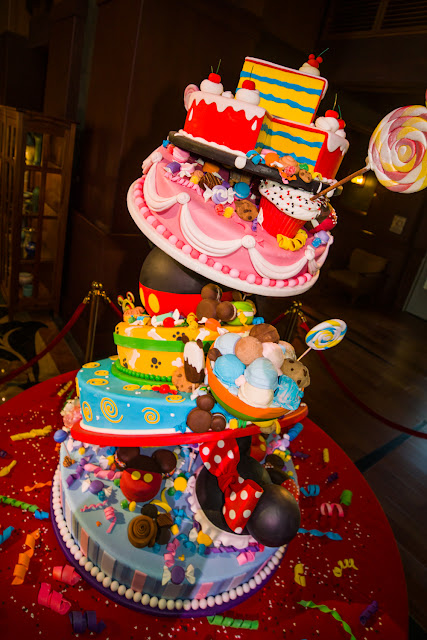 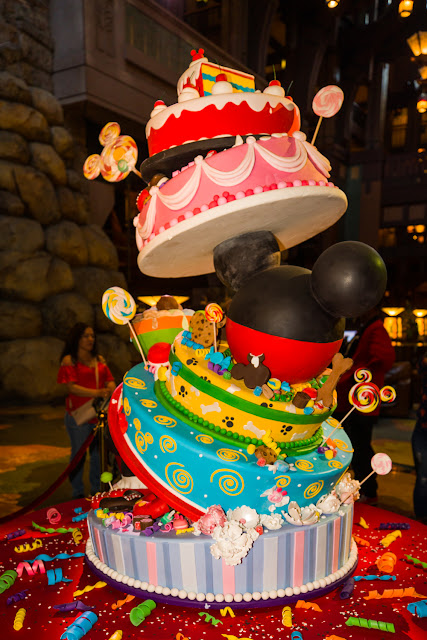 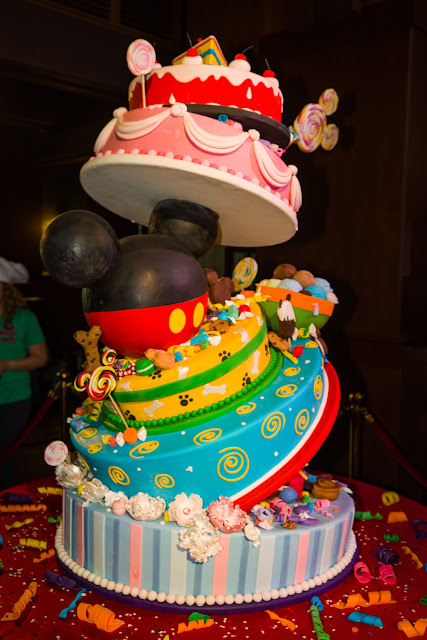 With 90 Mickeys the kids were finding them everywhere. 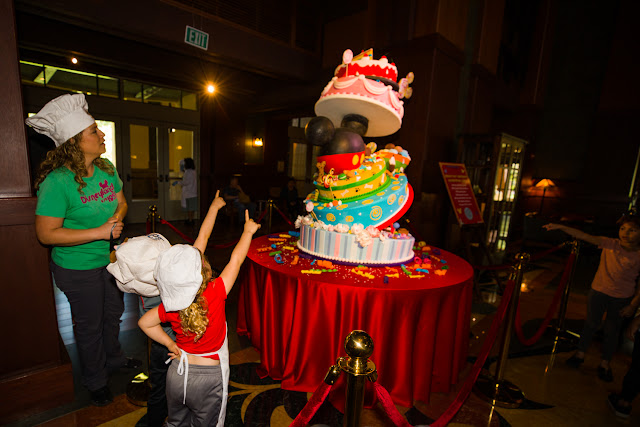 I love how the cake is covered in all these small treats recreated in fondant. 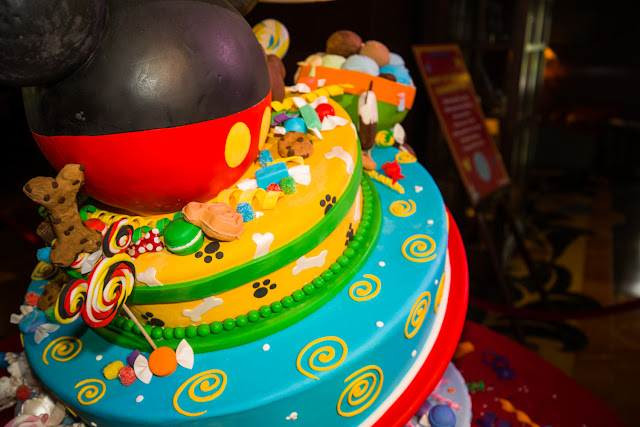 Look at that awesome Mickey waffle. It even has the imperfect edge you get when you make them for real. I can see at least 2 Hidden Mickeys here. One in the Minnie bow and another below the yellow ribbon curl. 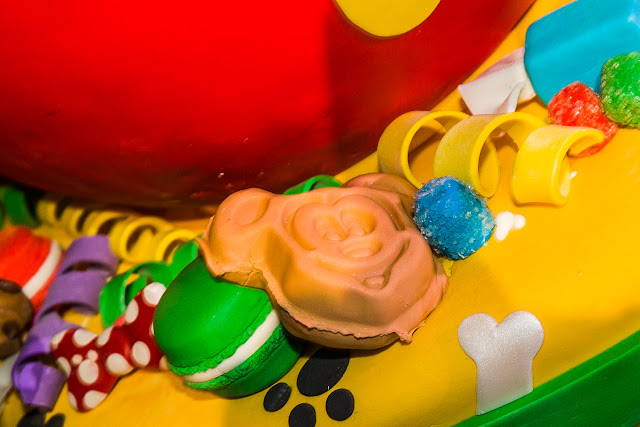 The other recurring Hidden Mickeys showed up in the form of small fondant Mickeys that were the same color as what they're on top of. 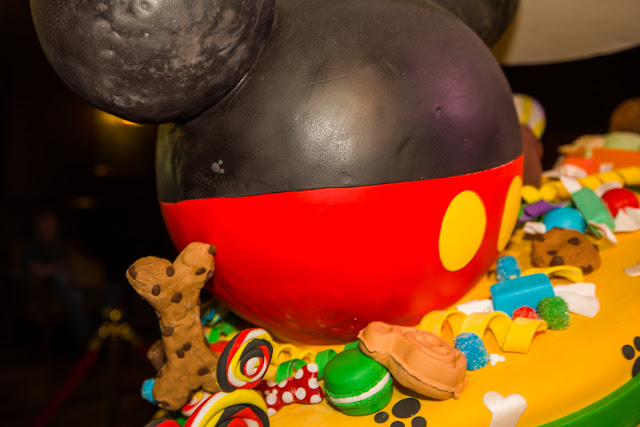 What about the center of these flowers. 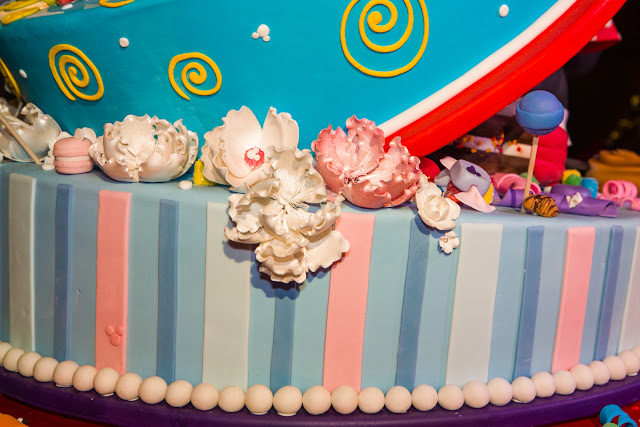 Over to the back. 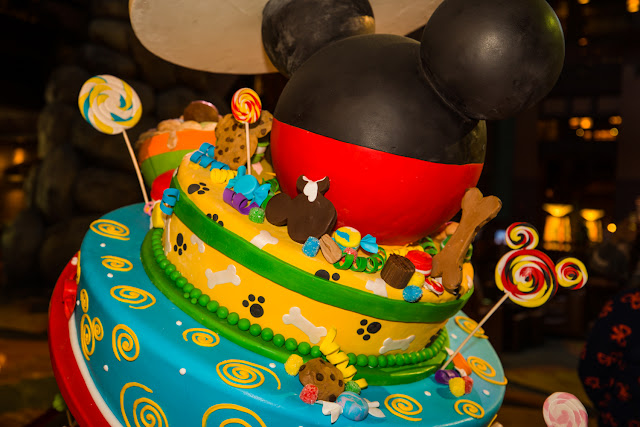 Did you see the Mickeys in the center of Pluto's paw prints? 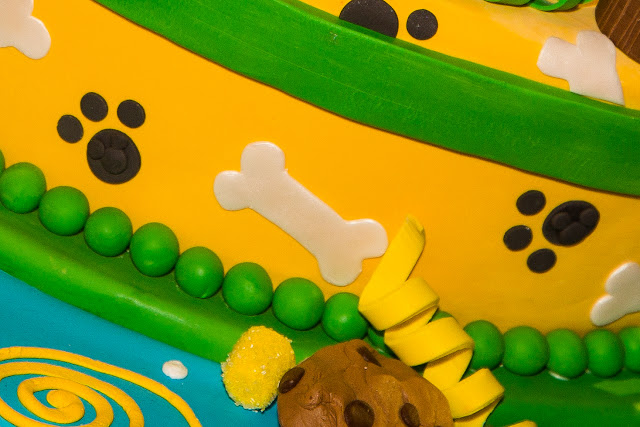 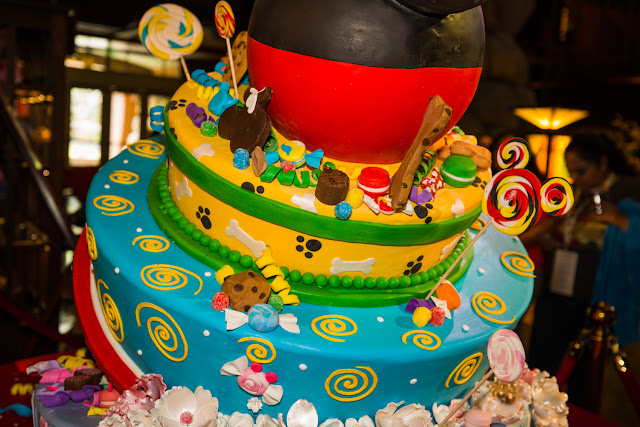 Or what about those mini chocolate chips in the chocolate truffle? 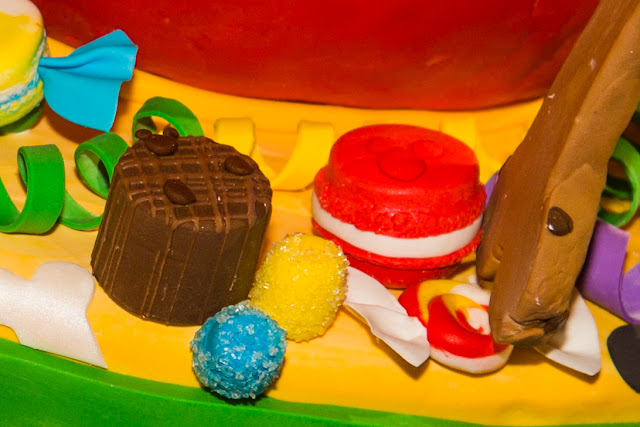 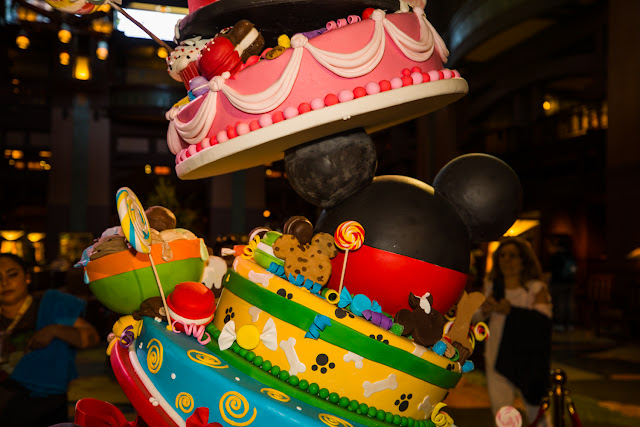 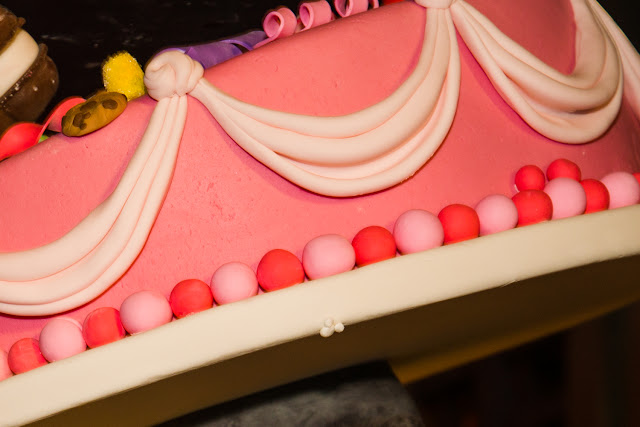 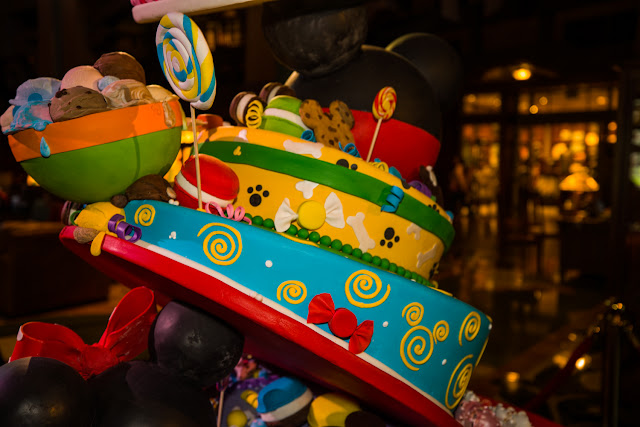 At least 4 I can find here. A chocolate chip in the cookie dough ice cream, an impression in the orange bowl, a red Mickey on the macaron, and a yellow Mickey on the Pluto cake. 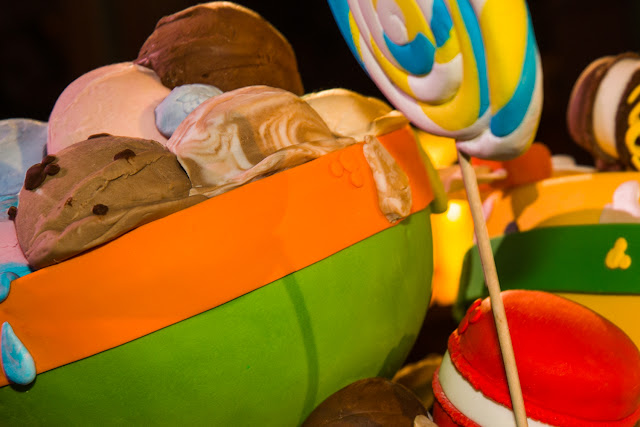 Such cute treats, some of which that can now be found at the newly re-opened White Water Snacks quick-service grab 'n' go restaurant. 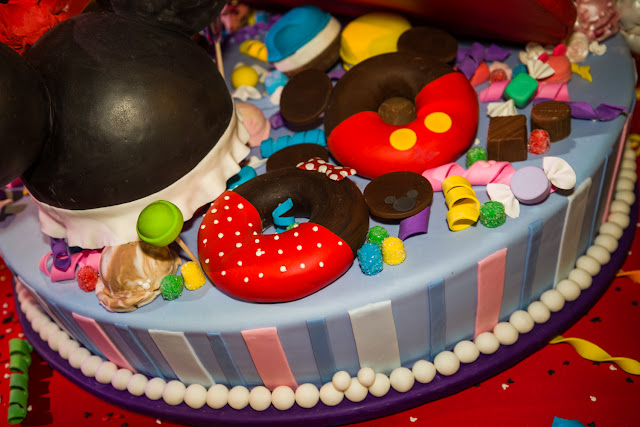 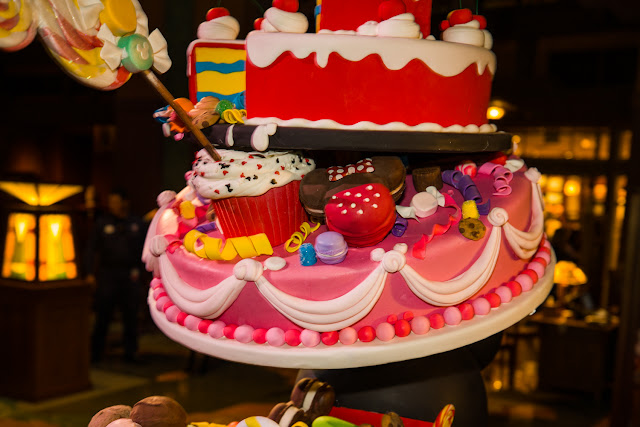 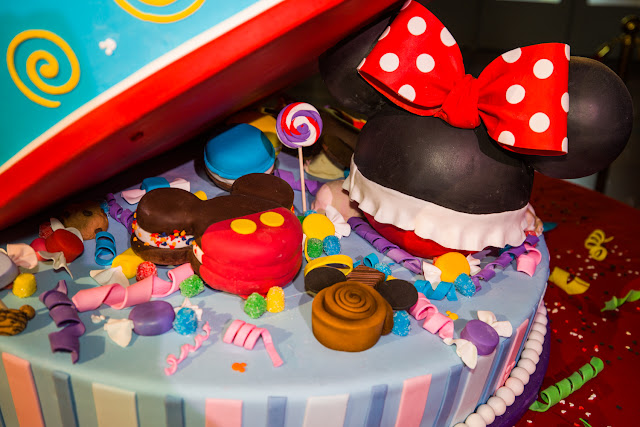 The kids get really into the Mickeys, and they remember from the last two times that you're never really done until you go up to the 2nd level and look down from the top. 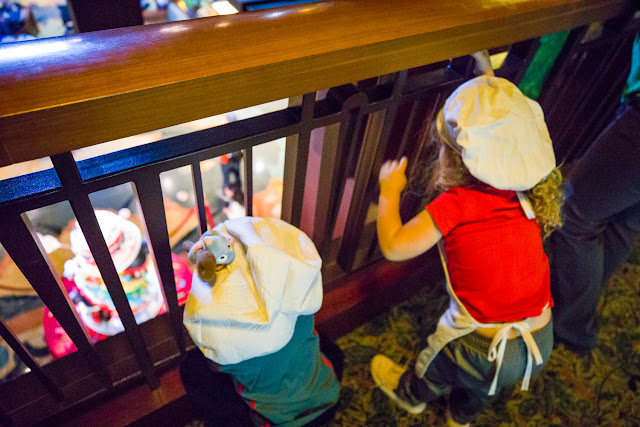 And from the top you get a better view of the Mickey cherries and Mickey whipped cream. 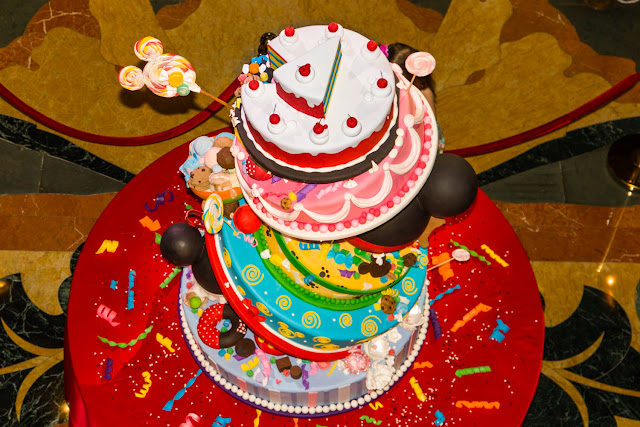 Have you gone to see the new cake? Which Mickeys were your favorite?
Posted by Joe at 11:00 PM