Is the Disney day over yet? No!
Theresa took the kids home, but my sister-in-law Megan and I are going to stay for a little while longer! 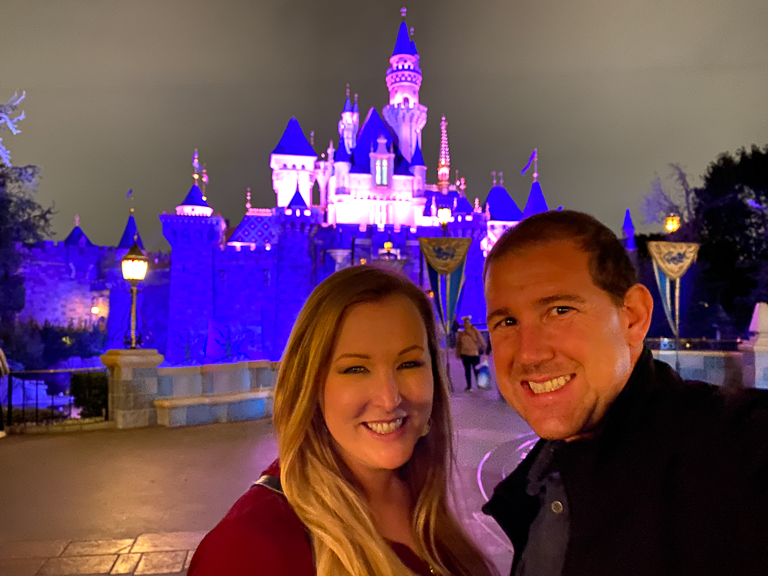 I haven't been on Indiana Jones in the longest time, so Indy was our very first stop. And because T and the kids left, I've got their fastpasses to play with too. So how about 1 time on Indy. 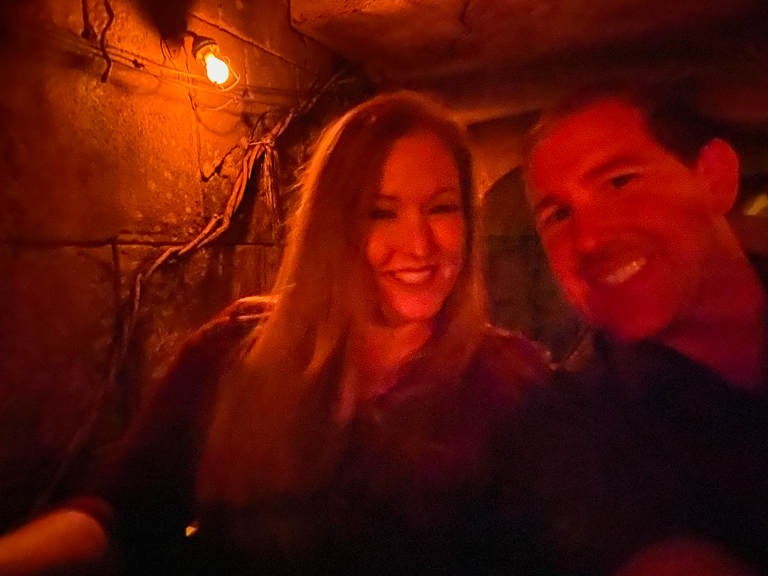 Followed immediately by a second ride! 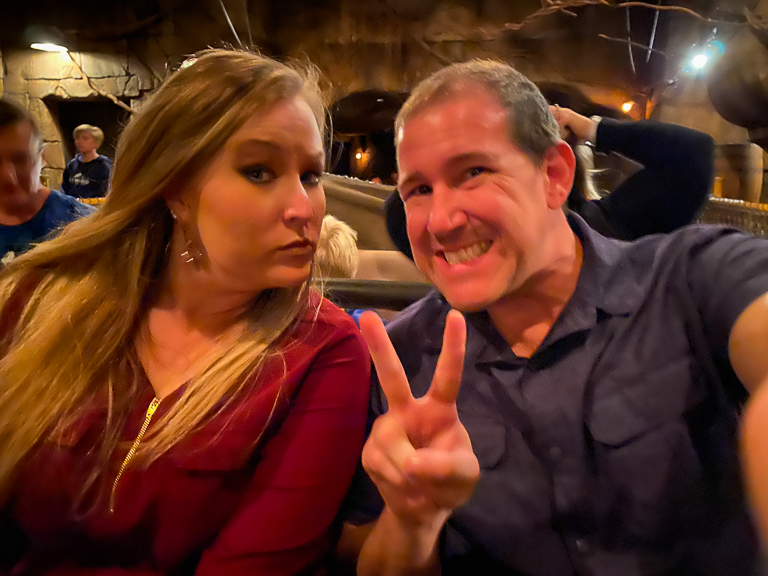 So what should we do on Space Mountain for the photo? How about pretend to fall asleep? An old standby. 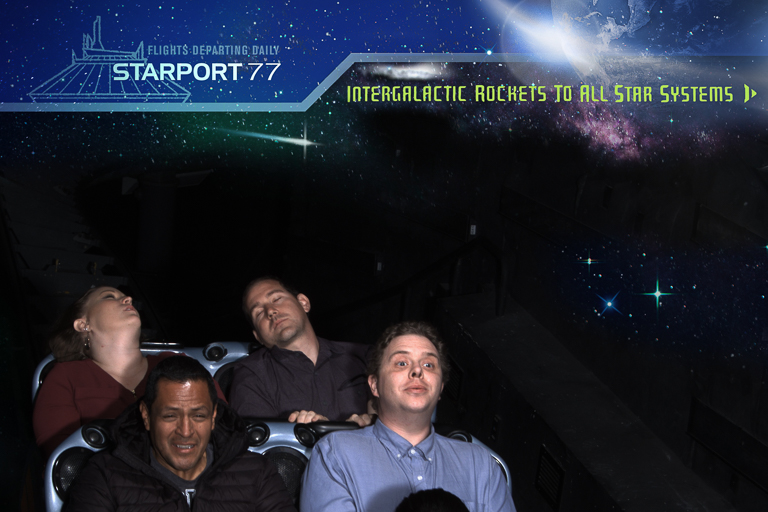 And we've got to get a picture in front of the castle. We even took the walking tour inside to look at the Sleeping Beauty dioramas. 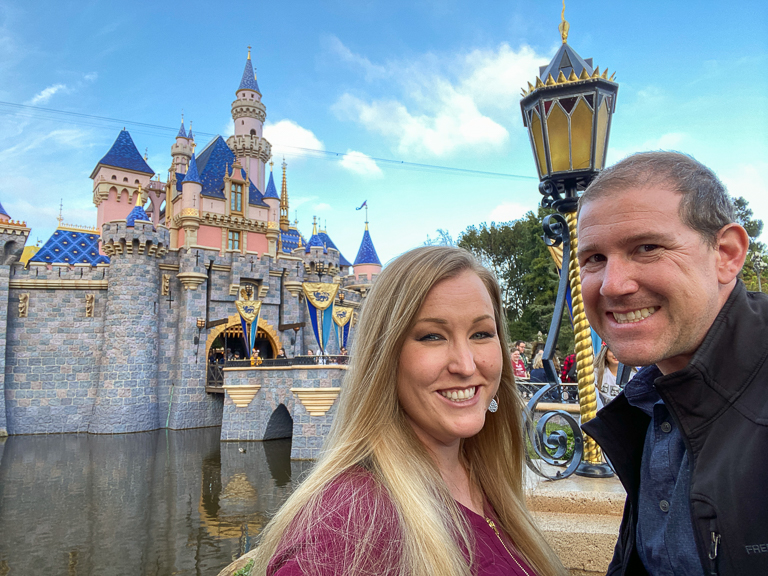 Make a wish Megan! Did you wish for the perfect dinner in a fantastic setting? 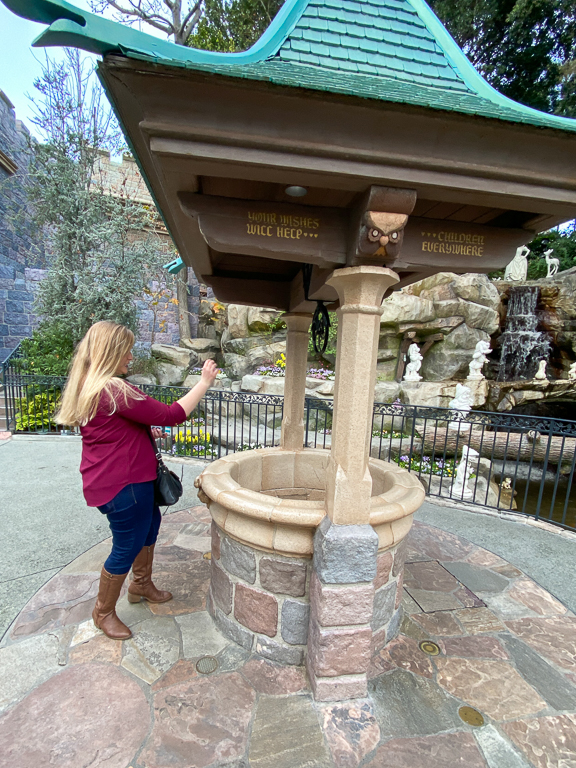 If so, then your wish is granted. My most favorite place to eat at the Disneyland Resort is the Napa Rose restaurant inside the Grand Californian Hotel. But, that's not my favorite location to eat it. Luckily they do order to-go from the bar. We've made use of that little trick quite a few times. 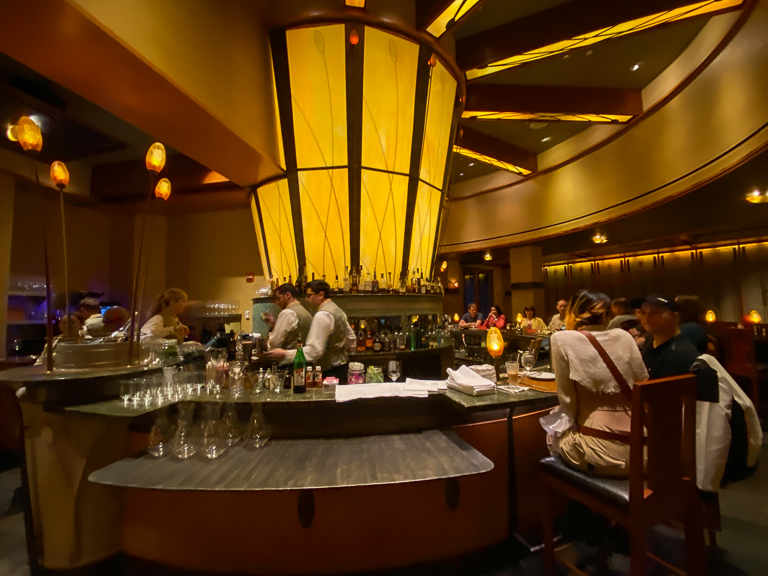 And what's the perfect meal according to Joe? It starts with their signature Pizzetta with smoked prosciutto, red flame grapes, caramelized onions, and cambozola cheese. Fantastic. For the entree, the kids meal filet is just enough meat to have a good taste. It comes with mashed potatoes and broccoli but that's not the star. Instead the Truffled Mac & Cheese Orecchiette pasta is what you want. Mmm. A nearly perfect meal. 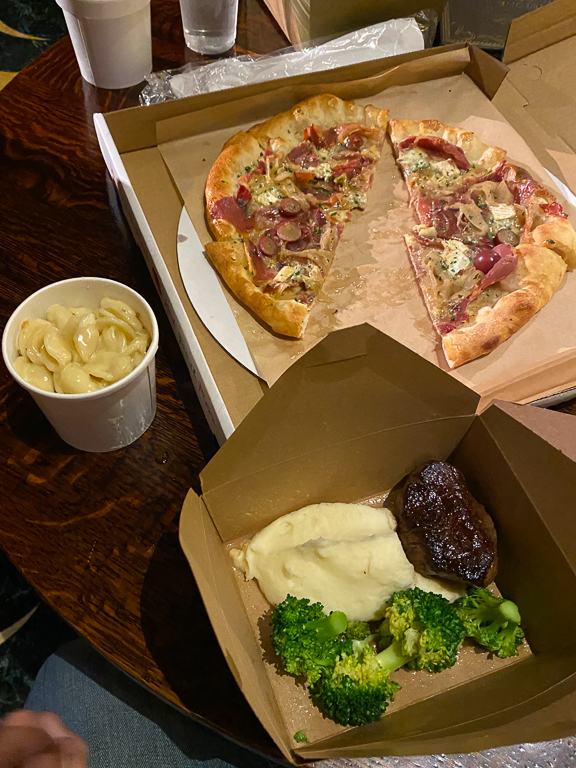 With some great company too, who happens to share many of my tastes in food. 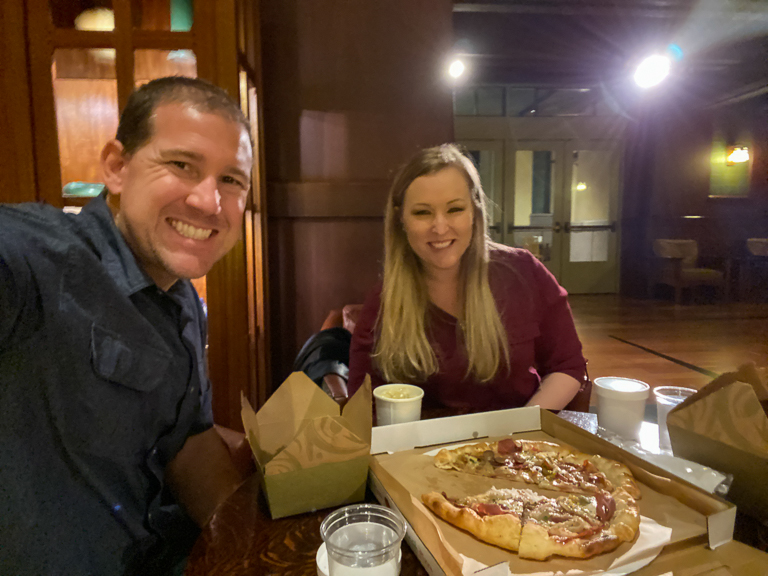 So where could be better than eating in the Napa Rose restaurant? I would argue the lobby of the Grand Californian. It's beautiful first of all, but the ambiance is even better. At 6pm, a live pianist comes and plays Disney songs for 30 minutes. If you've got nowhere to rush off to, it's a very relaxing way to spend an evening. And since this evening is all about me (okay and Megan too)... let's do another one of my favorite things to do when I'm not rushing. 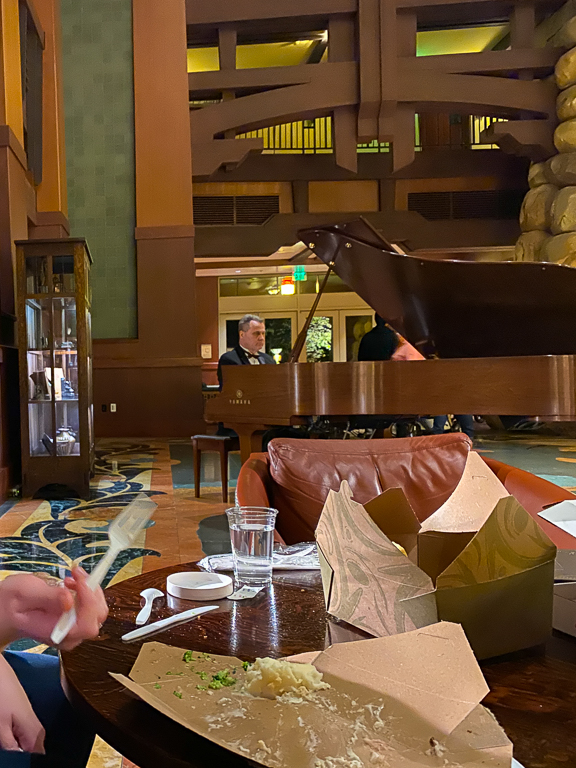 It starts with coffee from Starbucks. Megan was immediately on board with that part. 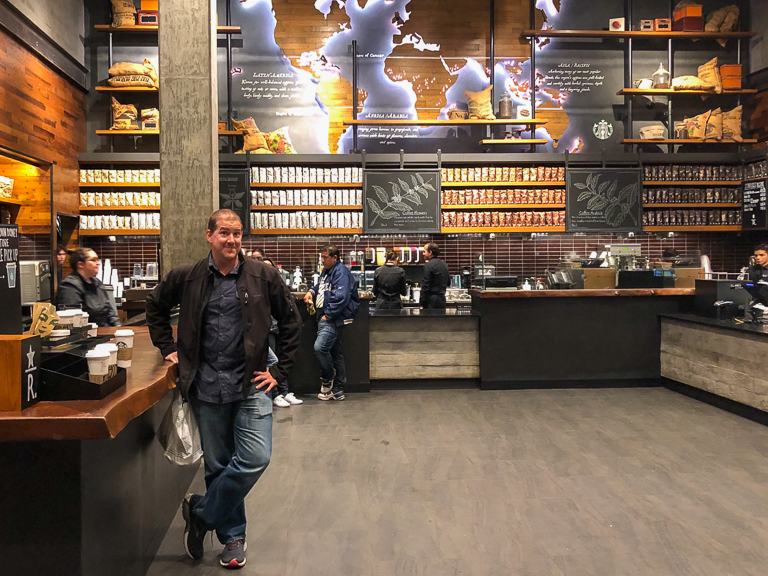 Something warm on these slightly cool California nights. 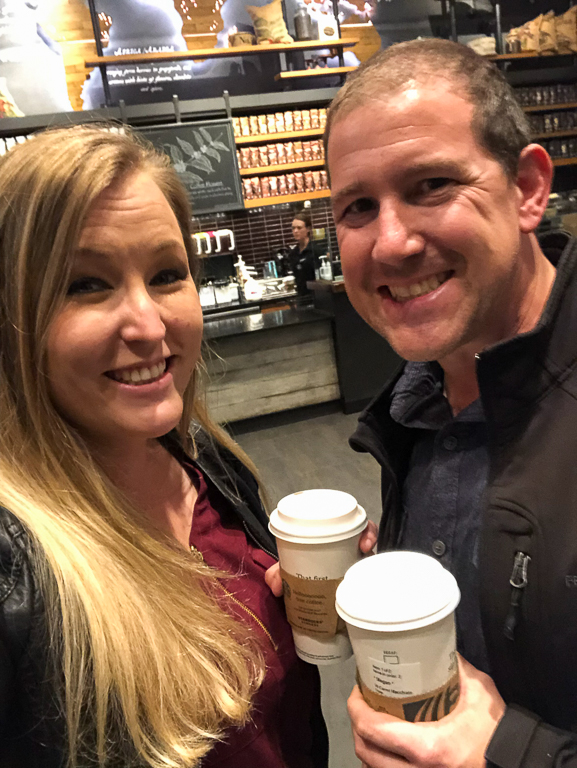 And it's never a guarantee, but today we just happened to get lucky. The porch on Main Street is also a fun place to sit and relax as you watch people rush back and forth to wherever they're going.

I've still been playing the Fastpass game during this whole downtime. I've lined up a few good ones.
Like a ride on the Matterhorn. Then over to the Disneyland Railroad. Megan had no idea there were dinosaurs like that here. 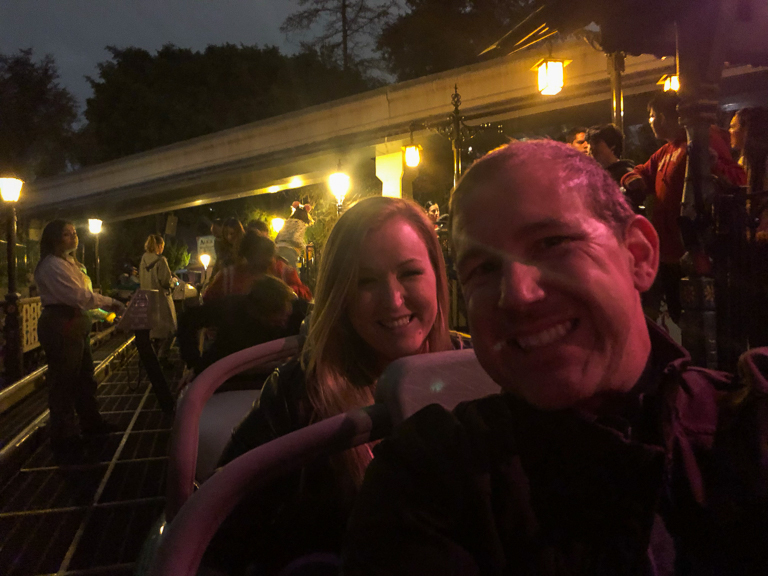 Next we headed over to Big Thunder Mountain. If you can't get to the parks early to have short lines on rides, the nighttime is as good or better.
We rode 4 times in a row! On the last ride, as a special challenge, we rode with our eyes closed the whole time. It's a different experience not knowing where the twists and turns are going to be. 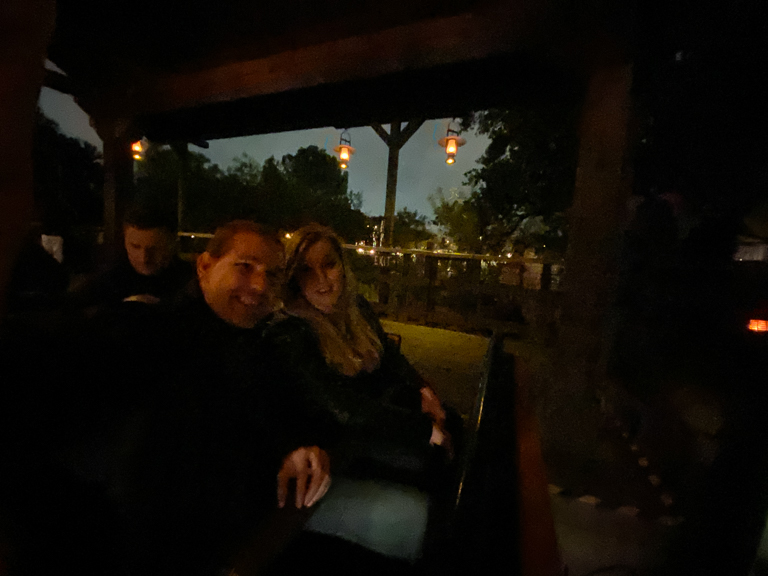 Both of us attempted the same "eye's closed" trick on the Matterhorn. Oh my goodness, it was painful. The Matterhorn is not a smooth ride in the first place. Having no idea where the turns are left bruises on my shins.

How about just one more ride on the Matterhorn? I've been saving a fastpass for a very special time.
One of my favorite memories of just me being in the park alone was back in 2011 when I spent the morning at Walt Disney World, got on a plane, and spent the evening at Disneyland. In that time, I also did 24 attractions. 12 at the Magic Kingdom, and their counterpart rides at Disneyland. It was then that while I was riding on the Matterhorn the nighttime fireworks started going off above me as I'm twisting and turning around the mountain. I thought Megan would enjoy that too, and I was right. 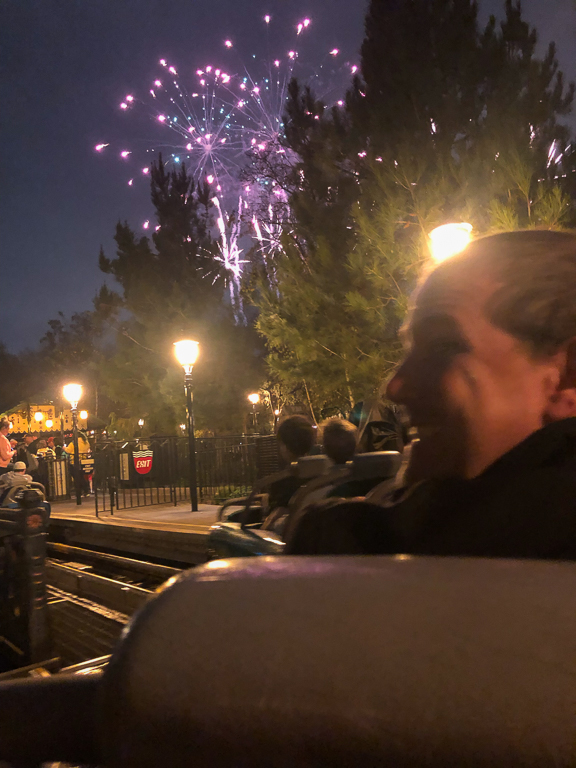 After our second beating on the Matterhorn, I think it's fair that we finish the fireworks in front of it's a small world. 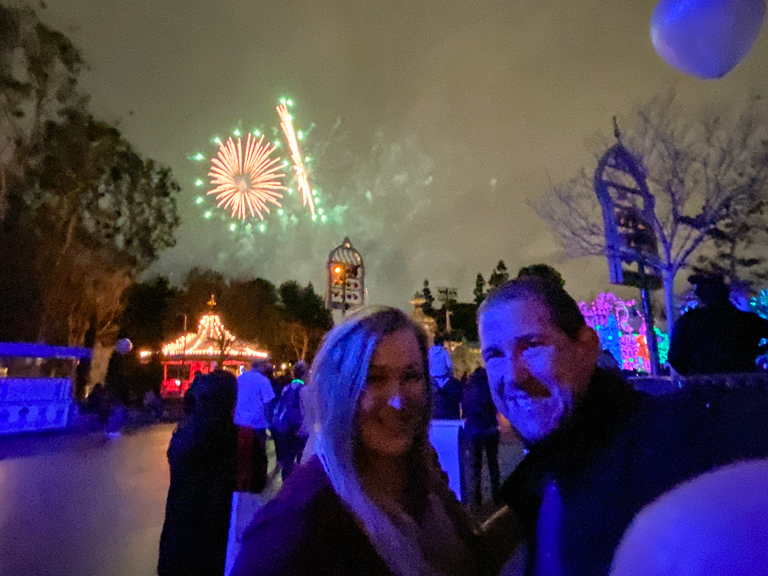 At Space Mountain, closing your eyes isn't too much different than riding normal. I'm wishing for the day when I can ride with the lights ON! 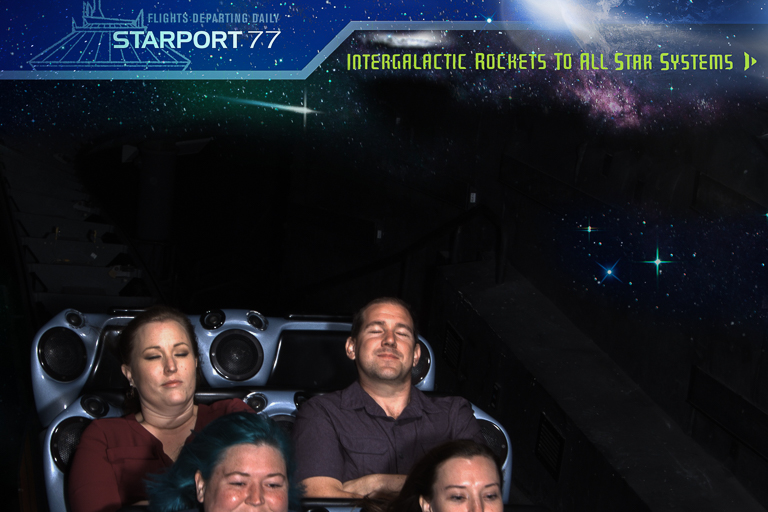 Unfortunately after a full day of Disney, my phone battery was just about dead. I didn't get to take too many more photos.
The wait times for everything are really good right now. We listened to some bad jokes on The Jungle Cruise, saw Captain Jack on Pirates of the Caribbean, then took another ride with Indiana Jones into the Temple of the Forbidden Eye. As we were walking out around 11:02pm, I was noticing things starting to close up. Whoa! Did we just close the park? I thought they were open until Midnight on Sundays. Guess I was wrong. Well that's a full day at Disneyland. 8:15am-11pm. A solid 14:45 hours worth of Disney magic.

And this is why we couldn't let our phones completely die. We need a ride home!
We Uber'd from the lot near the Disneyland Hotel back the house for just $35.
Our Uber driver was paying pretty good attention and didn't pull into the intersection at a green light because he saw someone from the other direction going full-speed through a red light. "Some people are crazy drivers" he said. And... not 60 seconds later, he slammed on his brakes hard halfway though the intersection of a 4-way stop. I thought it was kind-of funny considering we'd just talked about crazy drivers. 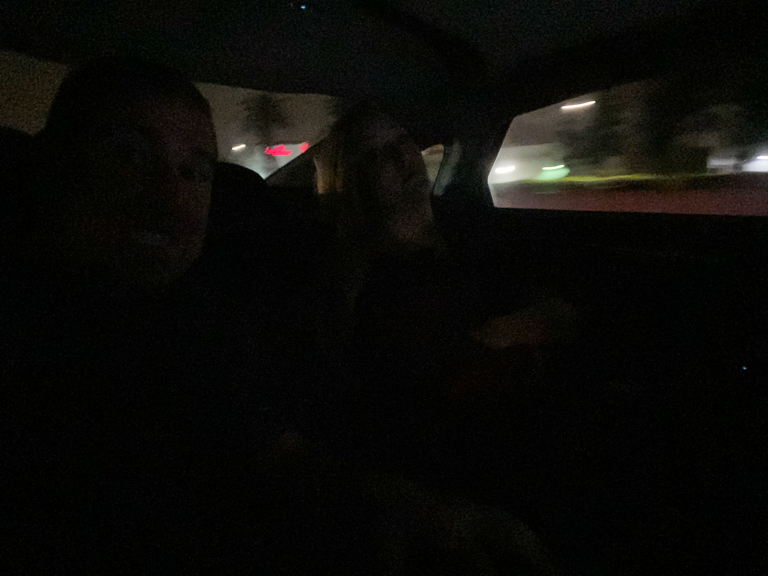 I had a lot of fun at the parks today. Getting to slow down at times and enjoy the atmosphere, and also going on rides I wouldn't normally get to go on. And I know Megan had fun too!
Posted by Joe at 9:30 PM