Happy Holidays! Special holiday edition Pringles are back for a limited time! I had previously checked out the Holiday Pringles back in 2013, when they released Pecan Pie and Cinnamon & Sugar. When I looked this year, I saw there were a few more flavors available, but let me tell you, they were not all easy to find. 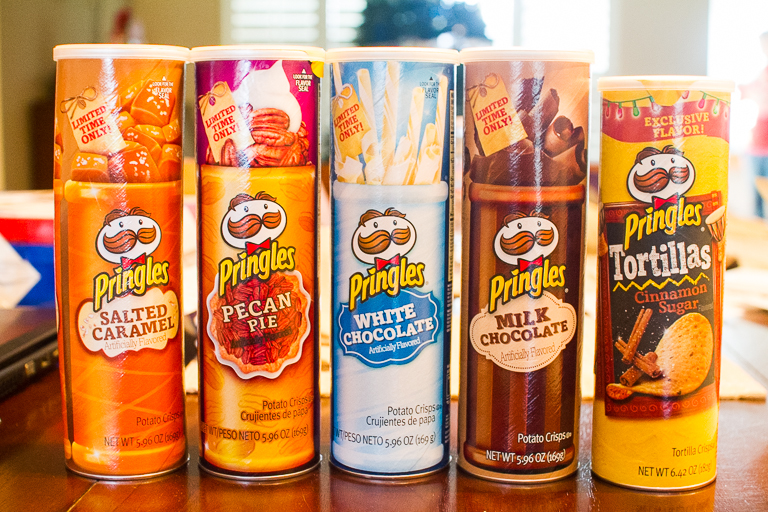 Of the new flavors released this year, three were exclusively available only at select retailers. In my area, I was able to find Pecan Pie, White Chocolate, and even the regular Pringles flavor Cinnamon Sugar (not the Tortilla version that is new this year). The rest of them, I'd need some help to get.


It's always more fun to do these taste tests with friends and family, so I made sure to wait until all of T's family arrived at our house to try them.

First up were the Milk Chocolate Pringles. No matter where I looked, I couldn't find these anywhere nearby. This flavor was exclusive to Walmart, but after trying three different ones in the area, and striking out each time, I knew I'd have to turn to another source. Enter the third party sellers from Amazon.com. Yes, it was quite a bit more than if I would have found them at the store ($6 shipped), but at least I got to try them.

In my head, I imagined these Milk Chocolate Pringles would actually be chocolate colored. I was surprised when I opened the tube and saw they looked just like regular chips with a dusting of chocolate powder on them. And I guess Pringles don't ship too well either. 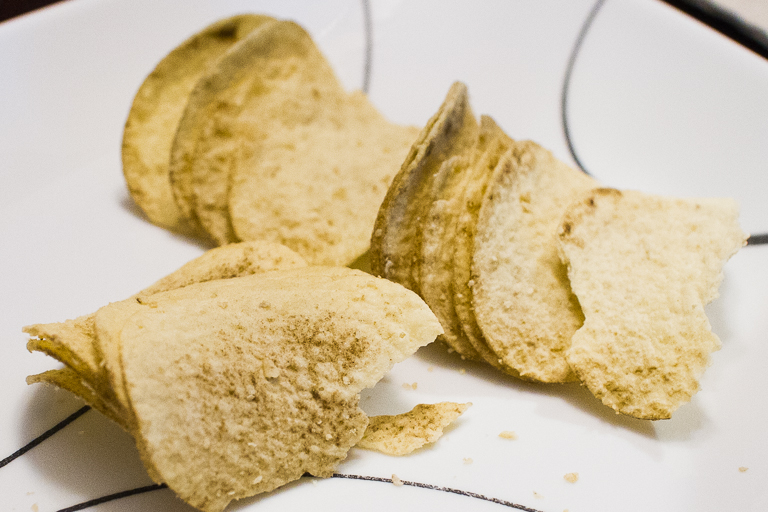 The chocolate flavoring here is fairly subtle. When you take the first crunch, you can taste a little bit of chocolate flavor, but it quickly gives way to a regular Pringles potato chip. After that initial taste, I would have a hard time telling you this was anything other than a plain Pringles chip. 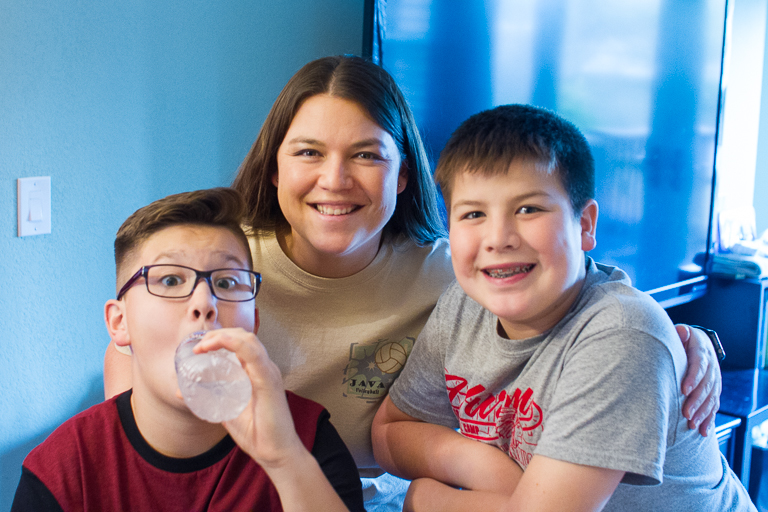 Staying in the chocolate family, after the Milk Chocolate, we tried the White Chocolate Pringles. 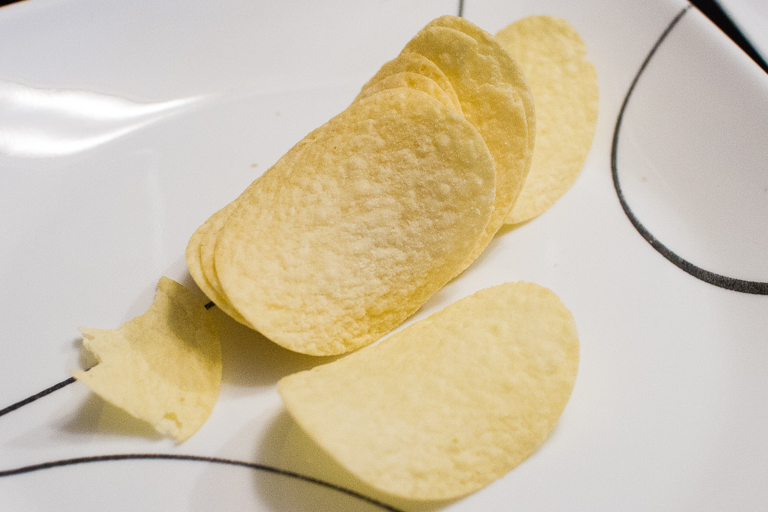 Now while the Milk Chocolate Pringles had some hints of chocolate flavor, these White Chocolate Pringles had none. My first thought when tasting these was cake icing. That quickly gave way to an aftertaste that was not very pleasant. It was overheard that "if you want to try a chip that tastes like Play-doh, try that one." It was universally voted the worst of the bunch by everyone who tried it. 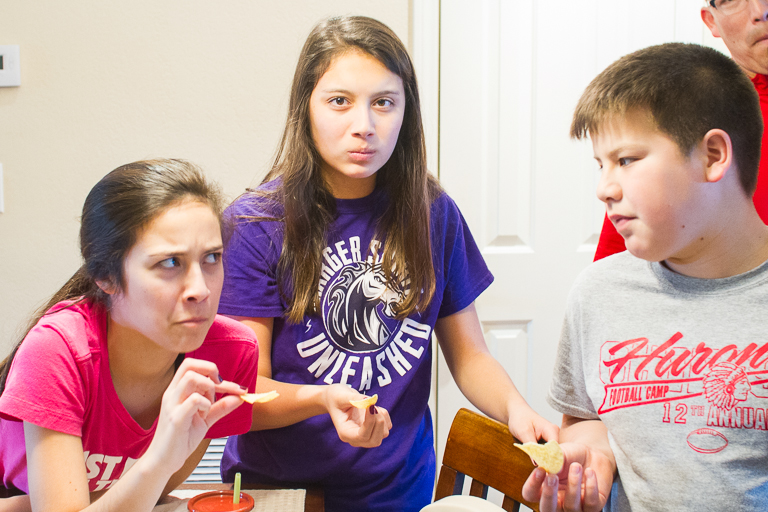 Next were one of my favorites from last time, Pecan Pie. 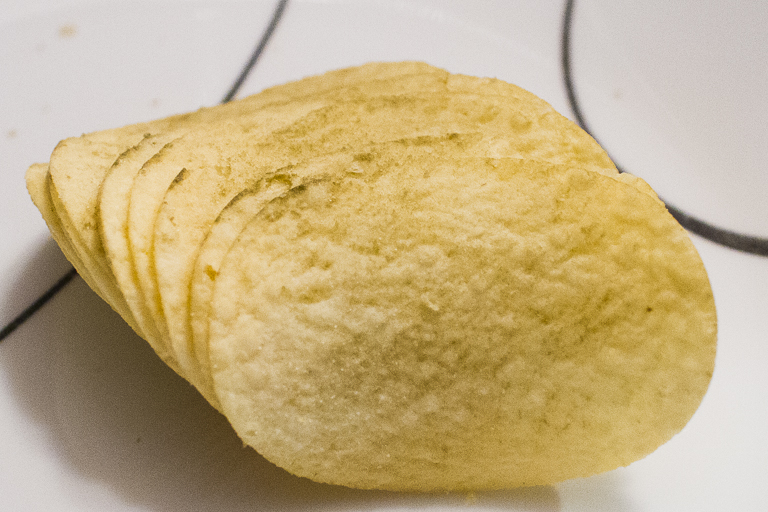 With these chips, the flavor is bold and strong. As soon as you bite it, you're hit with a nutty taste, along with a bit of sweetness. Many people enjoyed these, and Amy thought they were a strong contender for being her favorite. 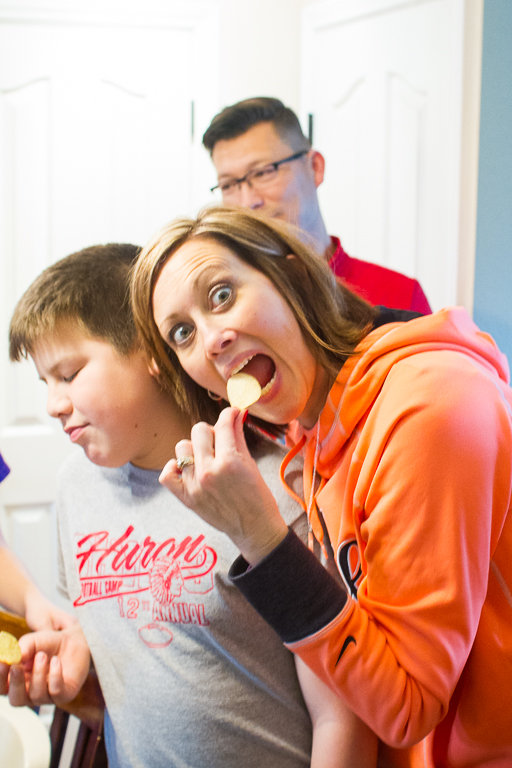 Along with the Milk Chocolate Pringles, I couldn't find the Salted Caramel Pringles anywhere either. My brother from Colorado happened to find some and shipped me a tube along with the Christmas presents he was already sending.

Guess what happens when you ship a sealed tube from a higher elevation to a lower elevation. Yep, pressure changes. 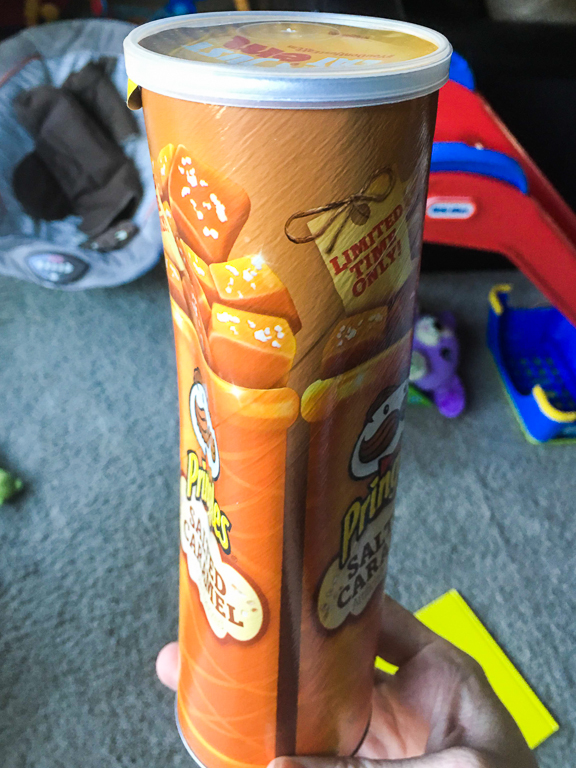 Good thing the chips taste the same no matter what. 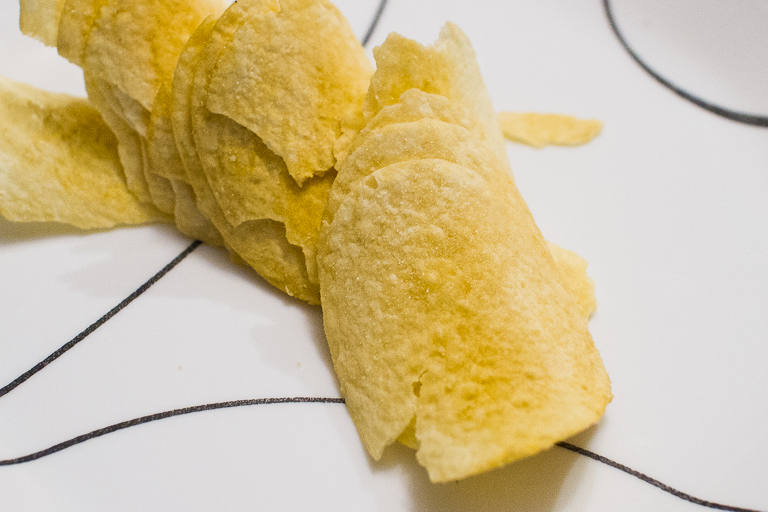 Wow, that's Salted Caramel with an emphasis on the salted. I always eat my Pringles chips flavor side down, and when this one hit my tongue I immediately tasted salt. The caramel sweetness came shortly afterwards, and both of the flavors came through a lot stronger than the potato flavor of the chip. 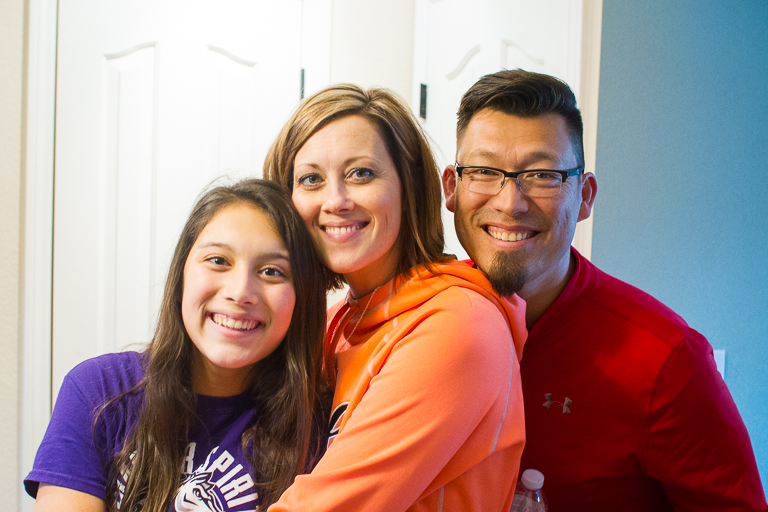 And now for something completely different. All these chips so far have been a potato base. These next Cinnamon & Sugar chips have a corn base. Again I couldn't find these chips nearby, and had to turn to 3rd party sellers on Amazon.com to get them here. They cost almost $7, and yes, I did have to explain to Theresa why I needed a $7 tube of Pringles. 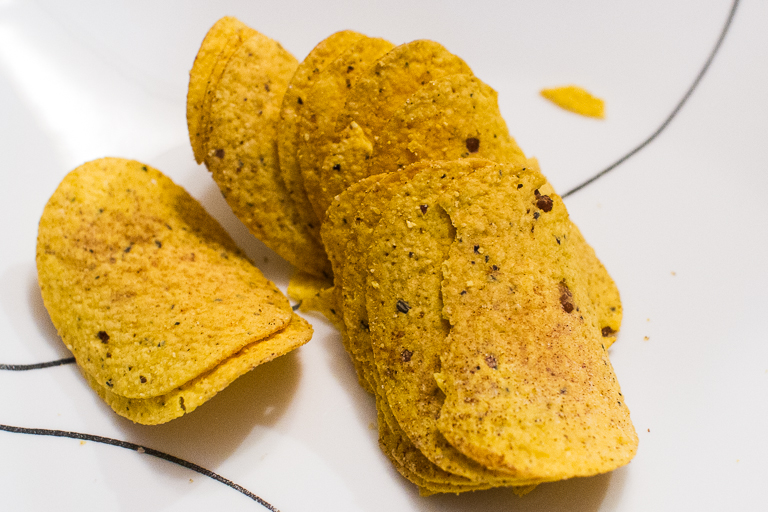 After eating all those potato Pringles, when you taste these corn Pringles, you really notice the difference. Not only was the corn a welcome change, but the Cinnamon & Sugar compliment it very well. I wouldn't exactly say it's a churro, but it's definitely similar. All the other chips we've tried so far have had at least someone who didn't care for them. Not so with these. Everyone who tried it liked it, and these were the favorite of many. 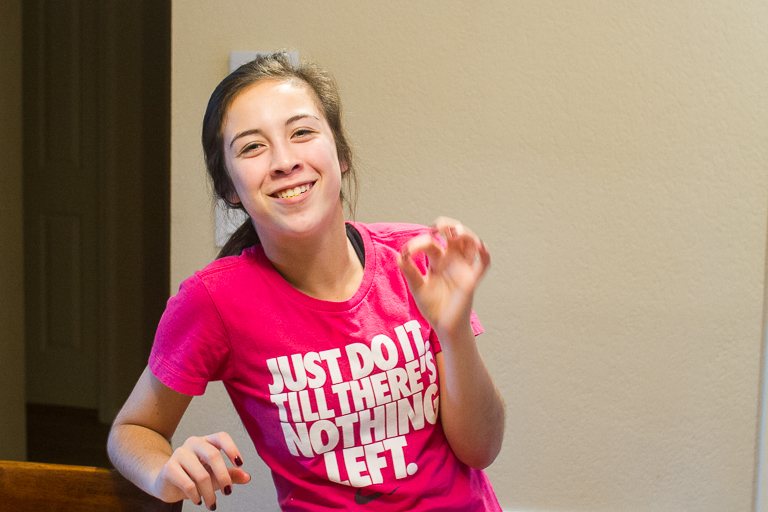 In my search for Pringles in my area, I came across Cinnamon & Sugar Pringles that weren't on tortilla chips. I've tried these before, but figured why not try them again. 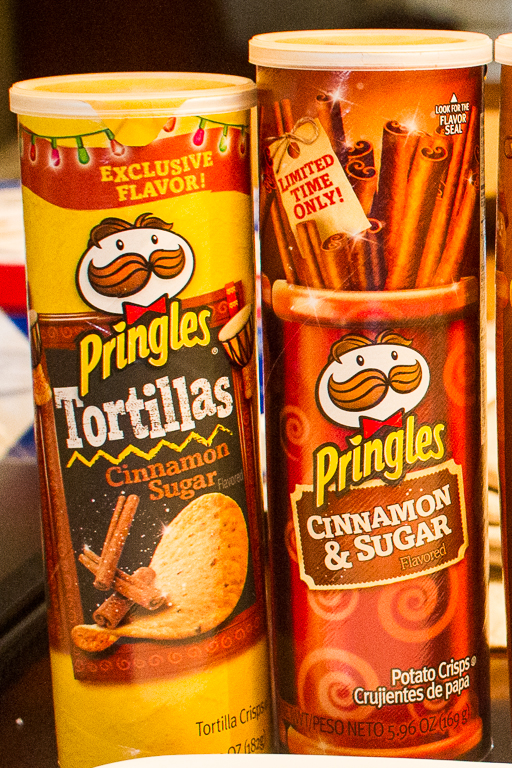 Just as before, the Cinnamon & Sugar here tastes exactly like Cinnamon Toast Crunch cereal, and that's not a bad thing. 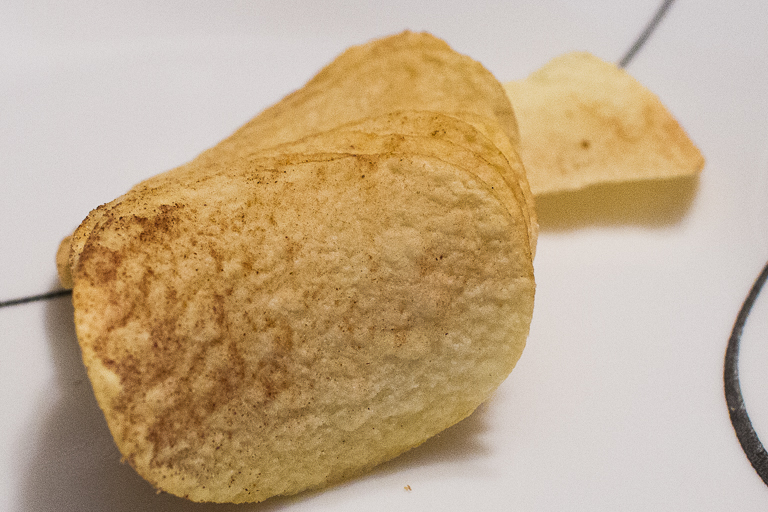 In the end, there were some clear winners and losers.

If you happen to see any of these flavors wherever you shop, pick up a tube and give them a try!
Posted by Joe at 4:30 PM