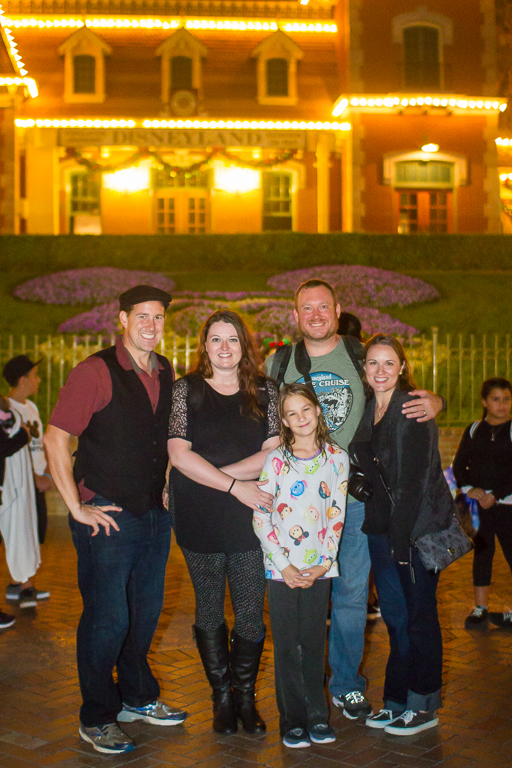 Despite the photo above, we actually started out in Disney California Adventure. 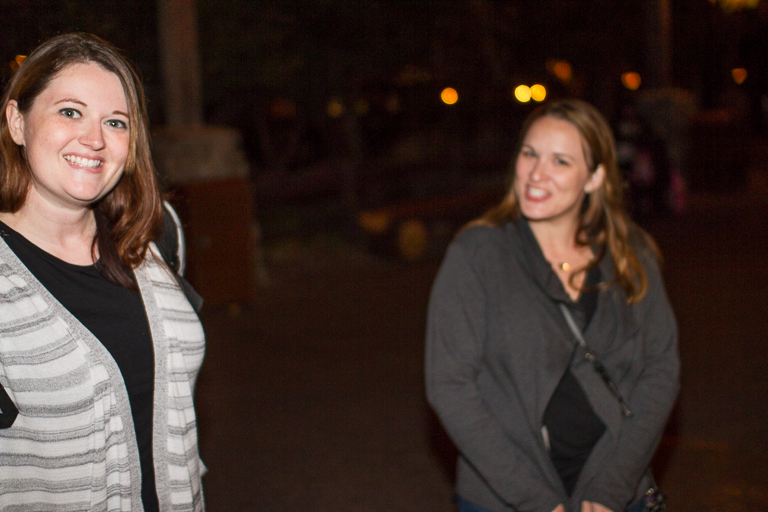 It's Katherine's birthday, or at least close to it, so it was decreed that she shall make the decisions regarding what rides to go on. First up was Grizzly River Rapids. Really Katherine? Starting with a water ride?
Matt pulled out a poncho for himself and then ducked into a nearby store to grab ponchos for Katherine and Amy. Hmm. That doesn't seem very fair for myself or Kelly. 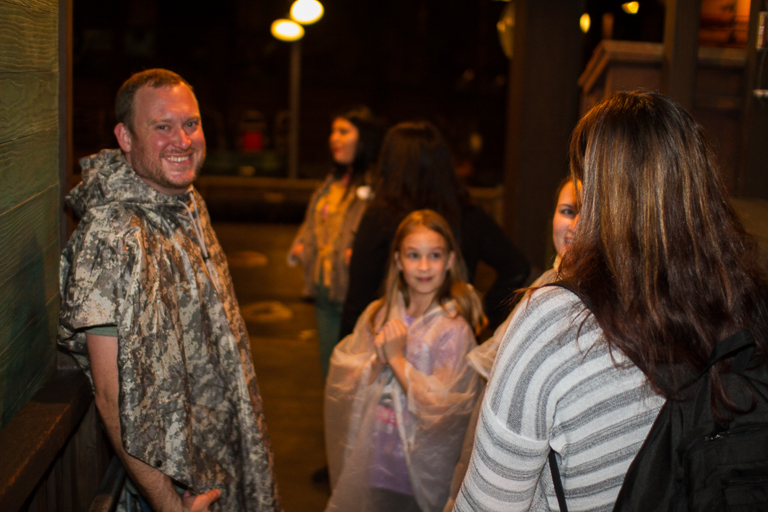 Katherine all happy and dry. 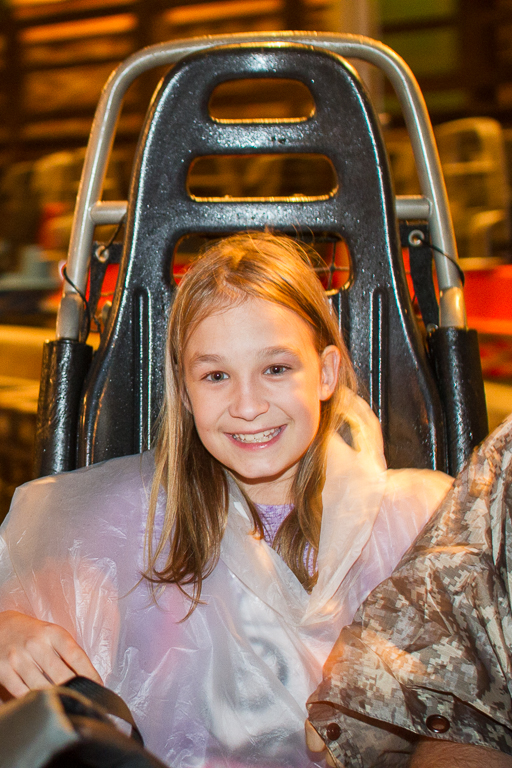 Kelly and I, not so much. 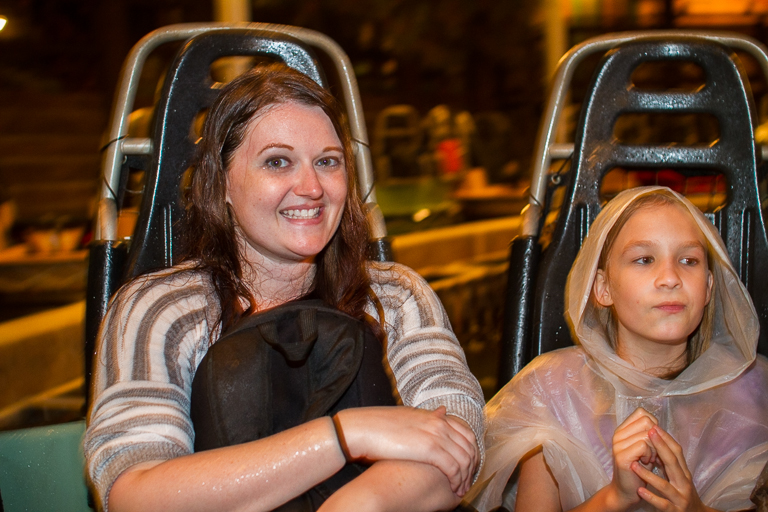 It's nighttime, so surely they've got all the major water features turned off, right? NOPE! The geysers at the bottom were fully functional and I was drenched! We asked to take a 2nd trip and didn't even have to get off the raft, because who in the right mind would ride at this time of the night. Upon arriving at the geysers, once again the raft spun and lined me up to get drenched. So why not take a third trip? At this point, I don't think I could get much wetter. 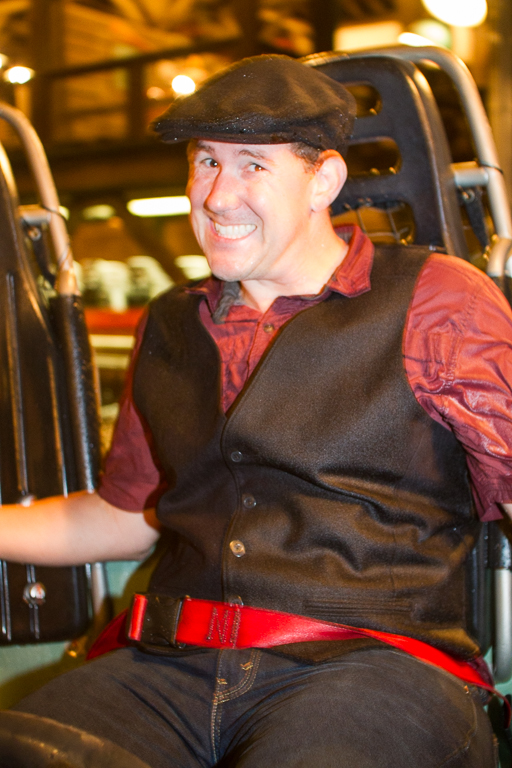 A mostly dry Matt, Amy, and Katherine, and a not so dry Kelly. 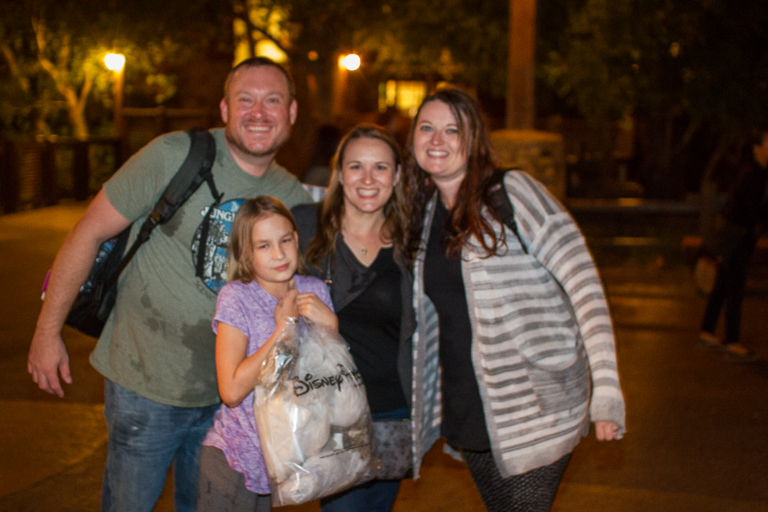 Thanks a lot Katherine.
On the walk to the next ride, Katherine kept telling us about how wet her leg got and how her shoe was wet. I felt so sorry for her. 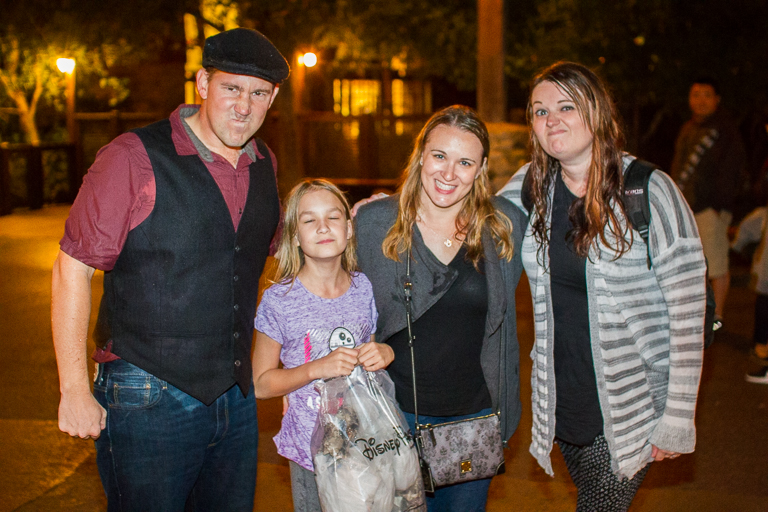 Earlier in the day as I was entering the park, a very nice gentleman who was leaving looked at me and said "You look like you could use a fastpass." Even better than a fastpass, it was a ride re-admission slip, good for any ride, any time, for up to 6 people! Just one problem. It's in my front pocket, and sliding my hand in for a quick check confirmed that it was indeed drenched.

The five of us made it to the entrance to the Tower of Terror and I informed the cast member collecting fastpasses that I just got off Grizzly River Rapids and that I had a pass, but it was soaked. She watched as I pulled out half a re-admission pass, then went back into my pocket for the rest of the pieces. Convinced that I did indeed have a pass, we were admitted! Good thing too! The wait time for this ride is 95 minutes! 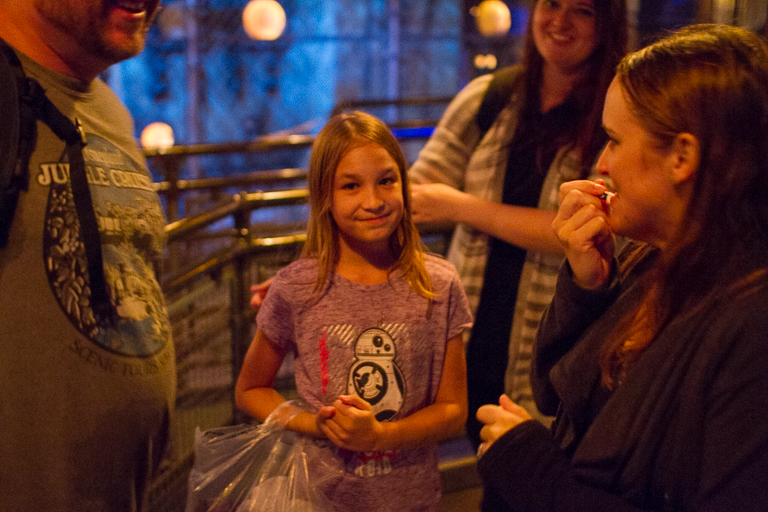 I haven't been on this ride since it's been converted to the late-checkout version. Without the lights or background music, it was much more of a surprise when the drop came out of no-where. I liked this version! 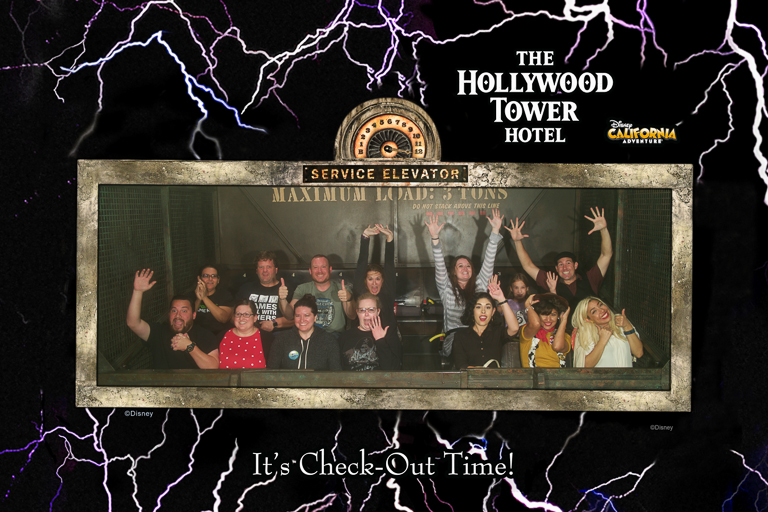 After we got off, DCA was closed, but we're not done yet! Over to Disneyland!

Katherine, what ride should we do?
Splash Mountain!!
Sigh... Always with the water rides.
At least got were treated to a view of the fireworks as we walked back into Critter Country. 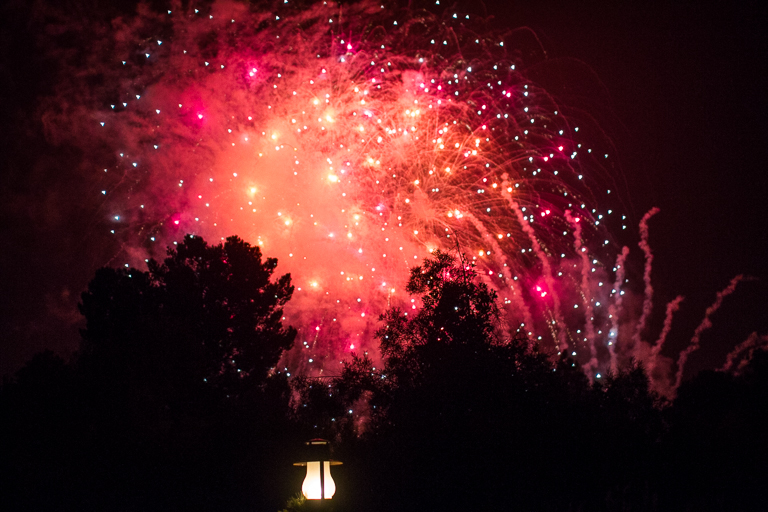 After grabbing a fastpass for the Haunted Mansion, we walked right on to Splash Mountain. 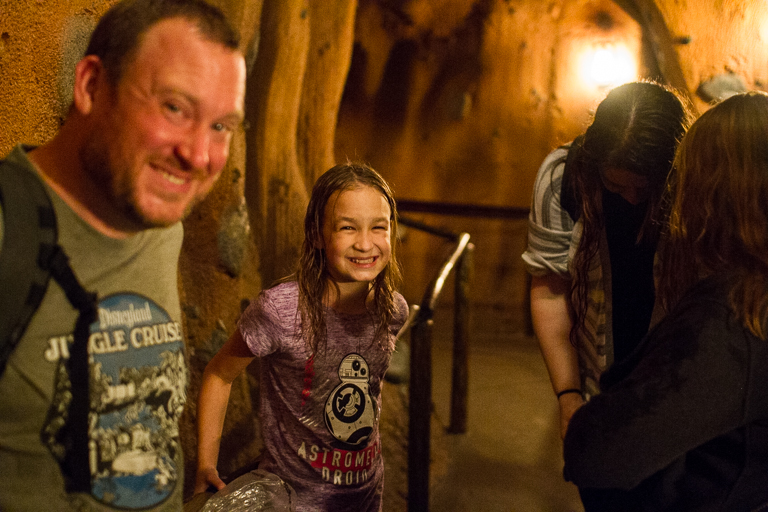 Never content to just ride it once, the five of us took four trips down the mountain.
We started with the grumpy look, moved on to Home Alone, tried out bunny ears, and finished with absolute terror. Pro tip, make sure whatever look you decide to use, that you close your mouth before you get to the bottom. You don't want to be swallowing any of that water.

With no wait on Winnie the Pooh, it was easy to take a quick spin there. I'm guessing it was a result of riding it at night, but it was either much brighter in there, or my eyes were adjusted to the darkness. I'll have to experiment with that in the future. It's getting near closing time. We used our Mansion fastpasses, but there was really no need to. There was no line and we walked right into the foyer to the stretching room. 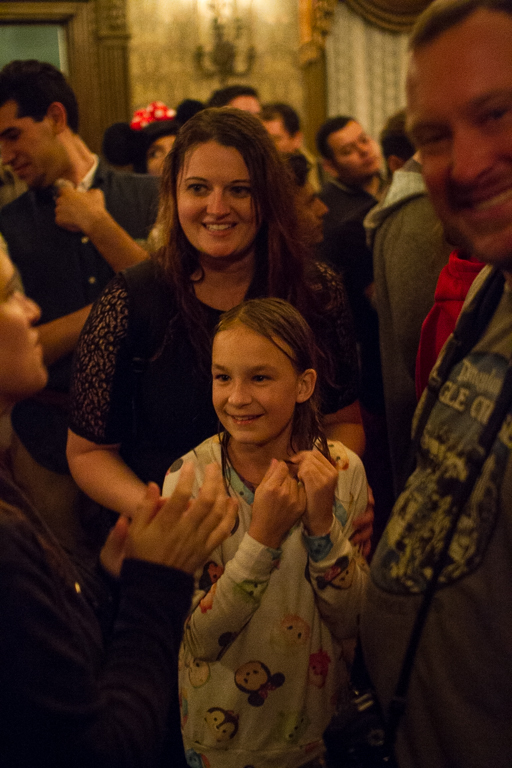 I know there's a divide, but I still say the Holiday version of the Haunted Mansion is my favorite. 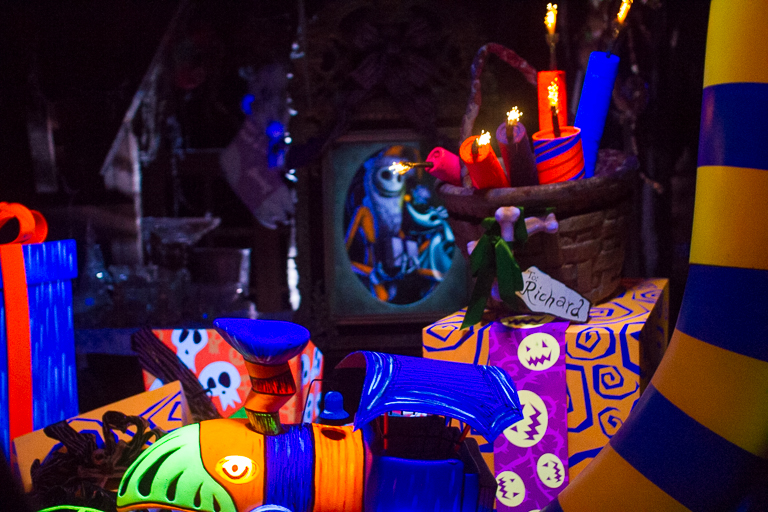 I hadn't noticed the picnic basket Sally brought for Jack before. Have to look closer at what's in it on a future visit. 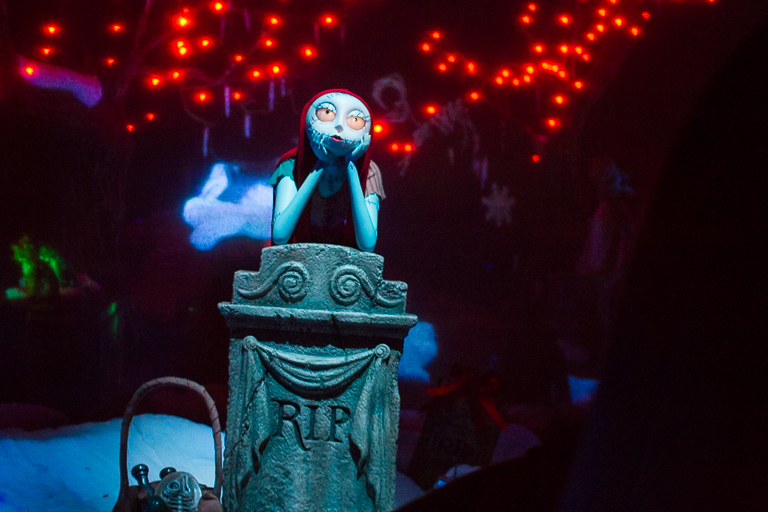 The park closes in 15 minutes. What's close by? How about a spin on the wildest ride in the wilderness? Though the sign showed 20 minutes, we walked all the way through the queue and only slowed down at the stairs. 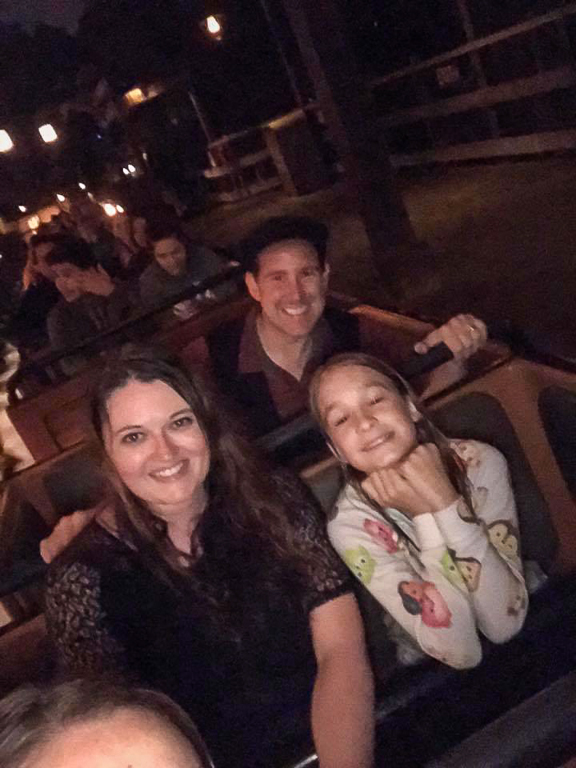 After our trip, we crossed our fingers and hoped the queue might still be open, but the park was closed. Oh well. It was a fun night, despite being soaked for most of it.

Let's take a group picture at the entrance. Not too many guests around to take photos for us, so I asked a couple cast members who were walking by if they could take our photo. One informed me that they had clocked out, but the other said she'd take our picture. Afterwards I gave her a very appreciative Thank You.

Our night complete, we walked through Downtown Disney towards our hotels. Even though we are all here tomorrow, we've got no plans to get together, so we said our goodbyes.

Tomorrow, T and I will pack up and then head into the parks for a few hours before heading home.
Posted by Joe at 10:02 PM