It's Dapper Day weekend at the Disneyland Resort. We've enjoyed celebrating Dapper Day at Disneyland since February 2013, and now that we have kids, there's a whole level of cuteness that is added. Ian trying on his clothes in the days before and looking so snazzy. 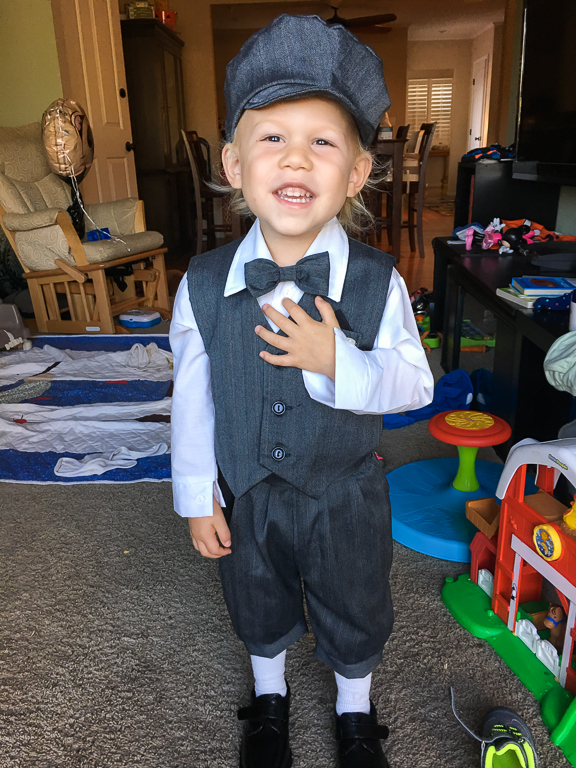 Alli learned how to walk about 2 weeks ago and is looking just too cute in her little white dress.
Through the DapperDay.com website, we've been enjoying the group hotel room discounts and making an entire weekend out of the whole event. On Friday, both Theresa and I were off work, so we packed up the bags that morning, tossed the kids in the car, grabbed Chick-Fil-A for lunch for the short drive, and headed to Disneyland! 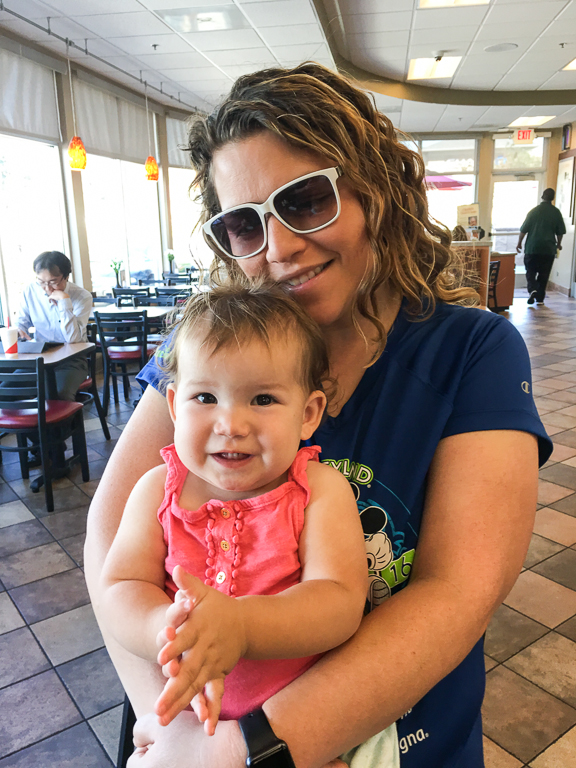 At 12:30pm, we pulled up to the entrance to Disney's Grand Californian Hotel. The bellman took our bags, the valet parked our car, and inside we went to check in. Since check-in isn't until 3pm, it was no surprise that our room wasn't ready, but they gave me keys to a room, took my cell phone number and told me they'd txt me the room number when it was ready. We left our bags with the bellman and headed into the park! 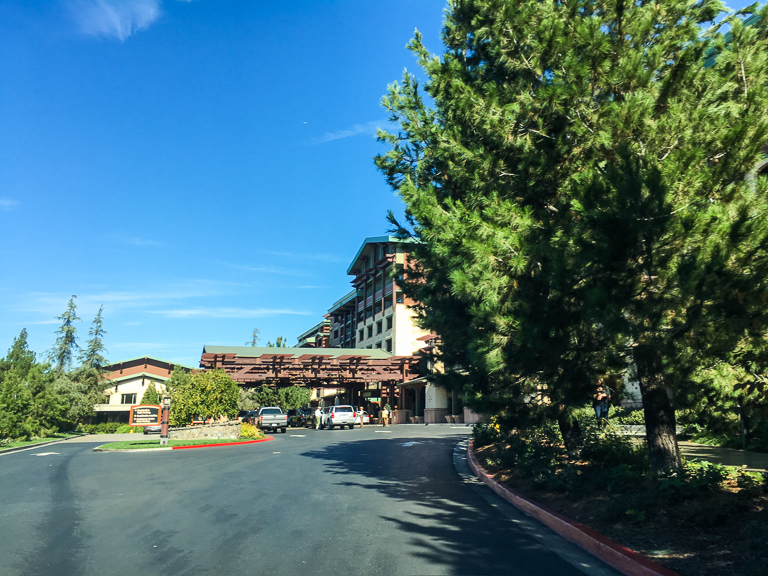 In the car ride here, Ian was telling us all the rides he wanted to go on. Ariel, Teacups, Small World, Mansion (that one was surprising), Pooh, and the roller coaster. Our first stop was Ariel, but it was closed, so instead we went on to the other Ariel ride, King Triton's carrousel! 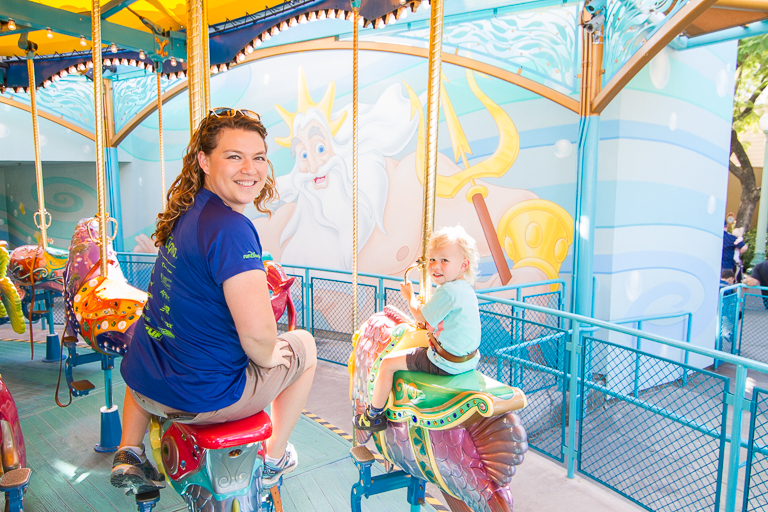 The park is not busy at all this Friday afternoon. After loading, we were able to ride 3 times in a row, and the ride operator let us stay on! Alli was completely loving it. After 3 rides, when I said it was time to go, she grabbed on to the handles even tighter and whined a little bit when I picked her up. Don't worry little girl. We're moving on to other fun things. Things like Mickey's Fun Wheel! No fear of heights for these two. 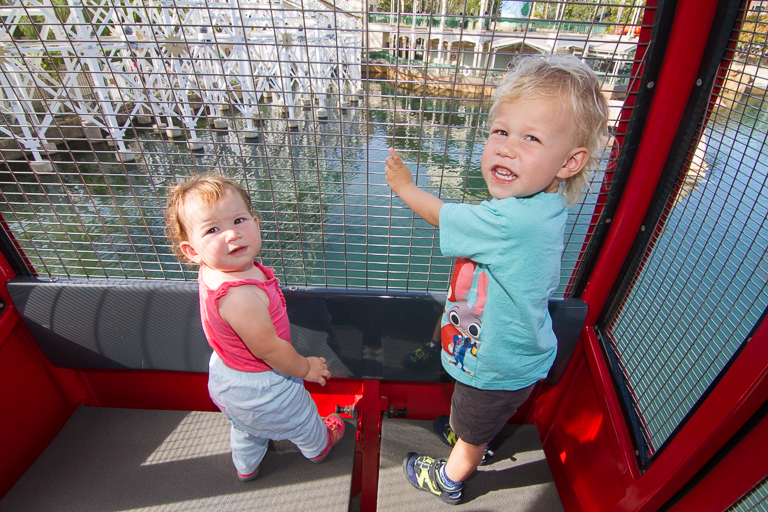 Very happy for the snack that Mommy picked up before we hopped on. 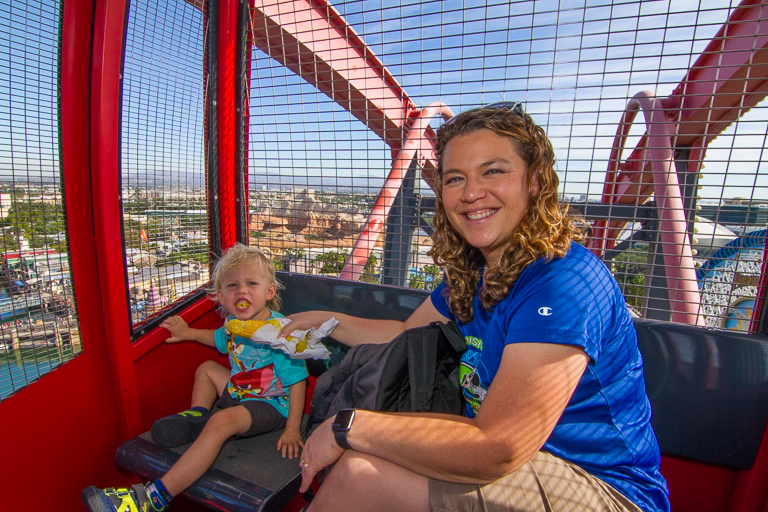 And Alli was chowing down too. 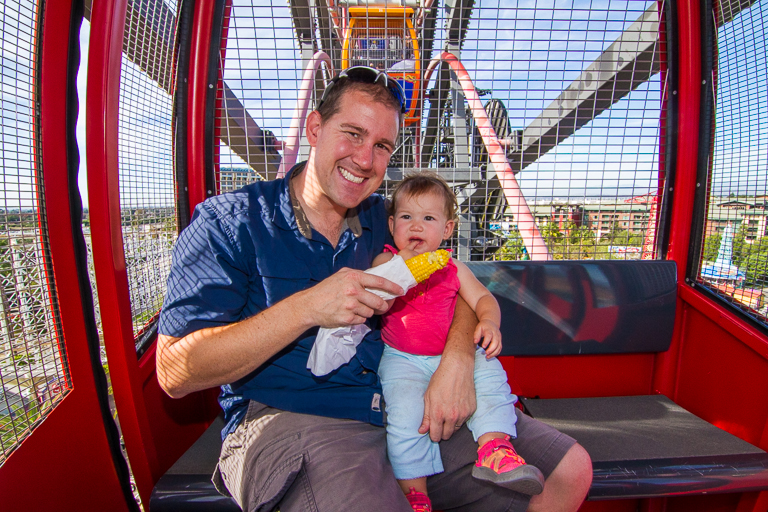 Who are you staring at Alli? 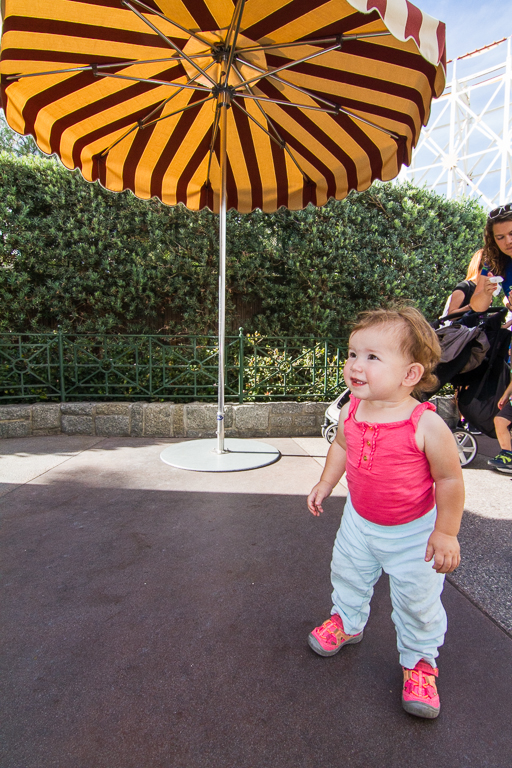 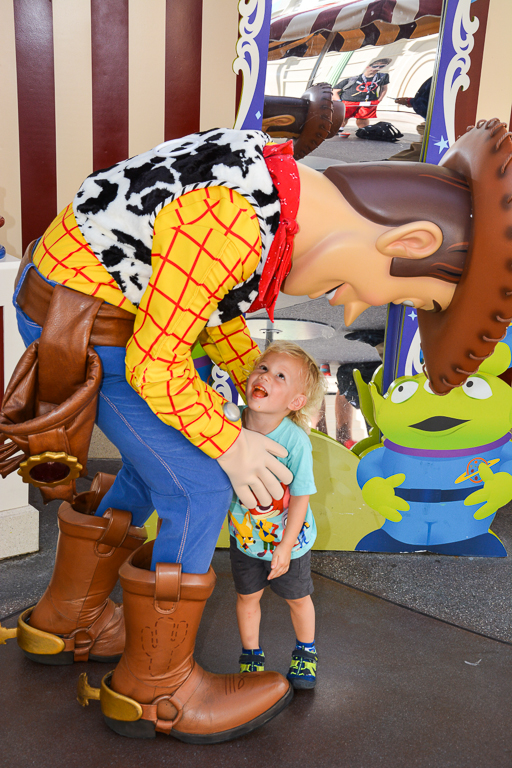 Ian had no fear and went right up to him. Alli was a little more reserved. 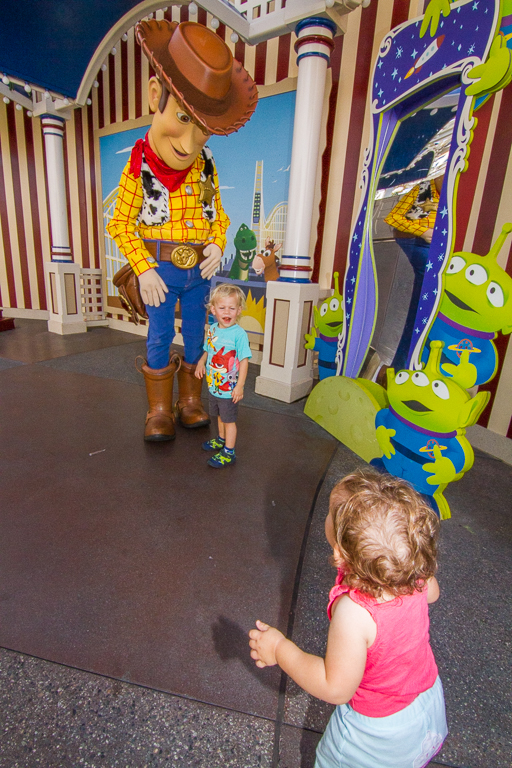 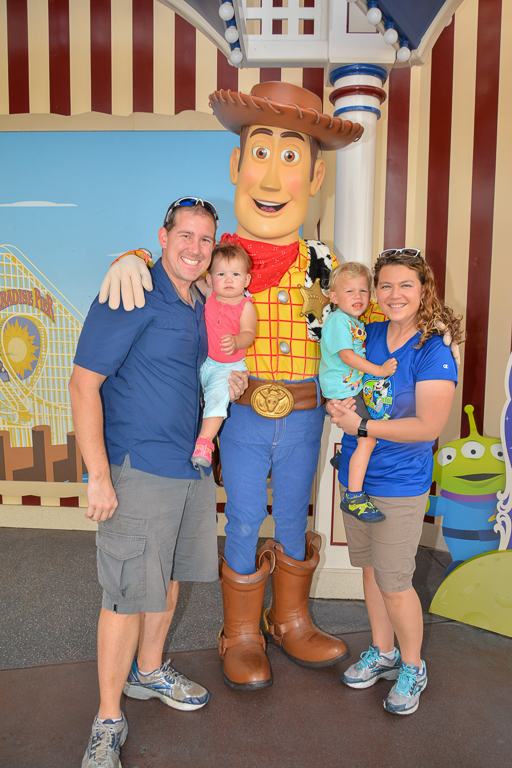 Let's see what can we ride next. Continuing this loop around Paradise Bay we've got they Silly Symphony Swings (nope, Ian's too short), Jumping Jellyfish (still too short). The Golden Zephyr is open. Let's head there! Being a spinning ride, T will be skipping it, but I was up for taking both kids with me. Upon getting to the loading zone, I was told that only two people could sit in a row. Hmm. Well I think Ian can sit by himself. Let's try it. 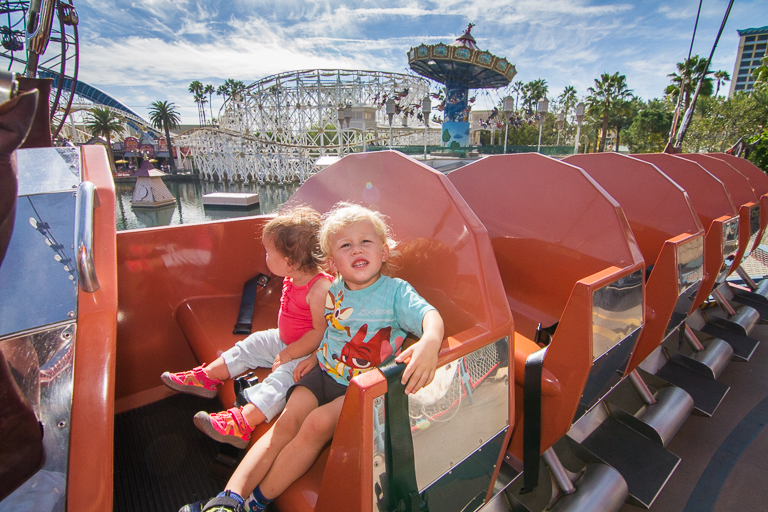 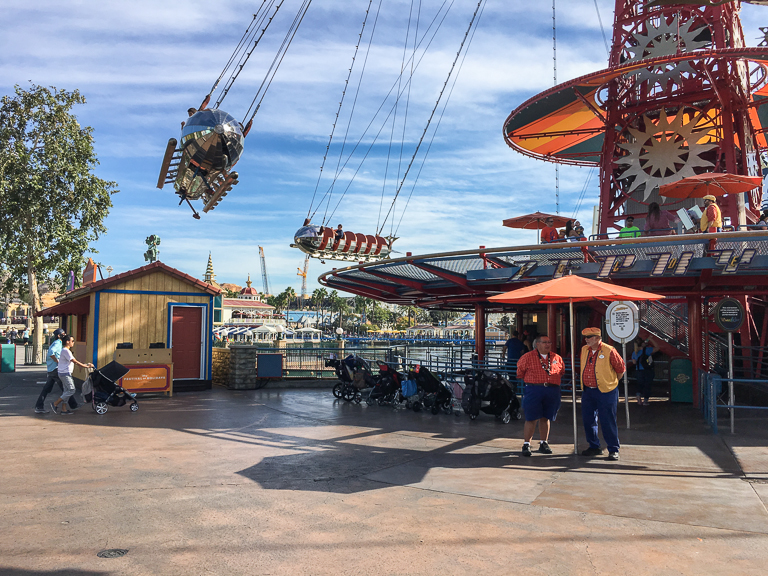 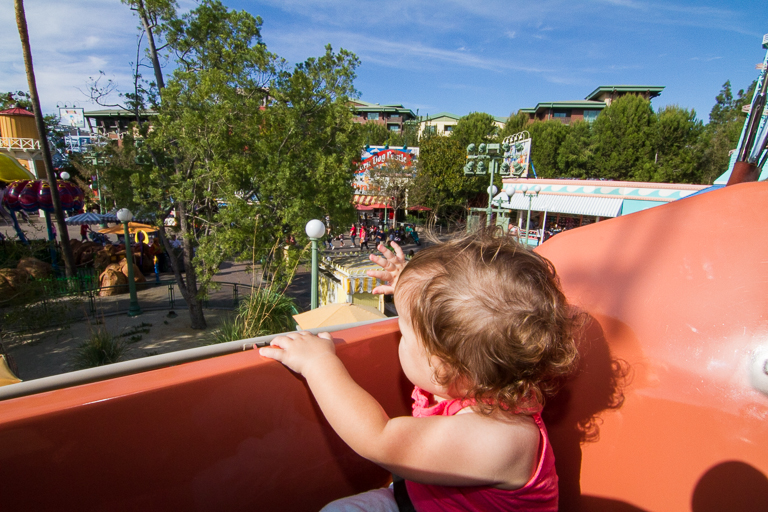 And Ian did a great job riding all by himself. 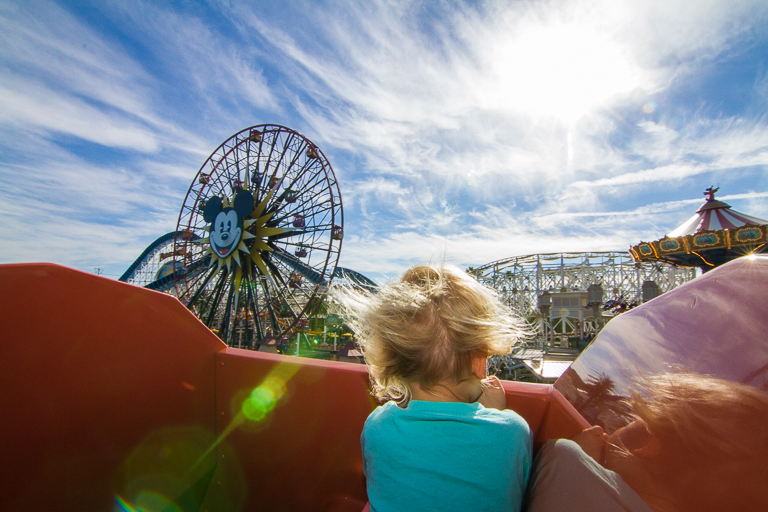 Finally we're back to where we started and Ariel is back up and running. 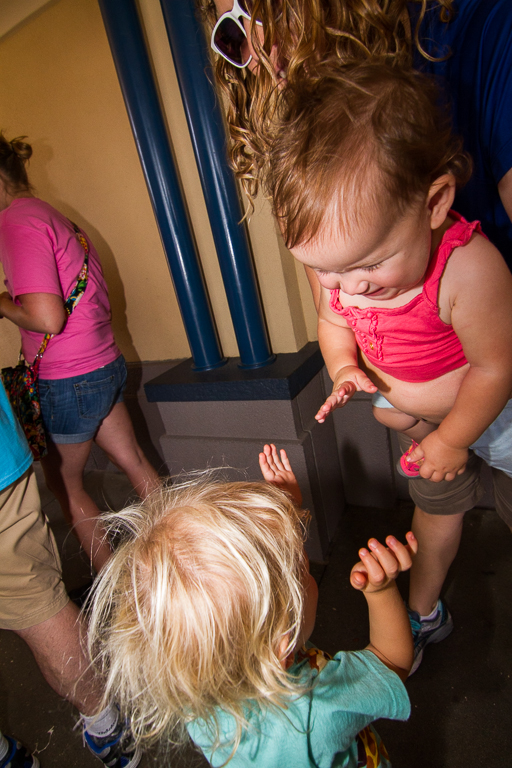 Both kids love the ride. Except maybe Ursula. Alli snuggles up a little closer when we ride by her. 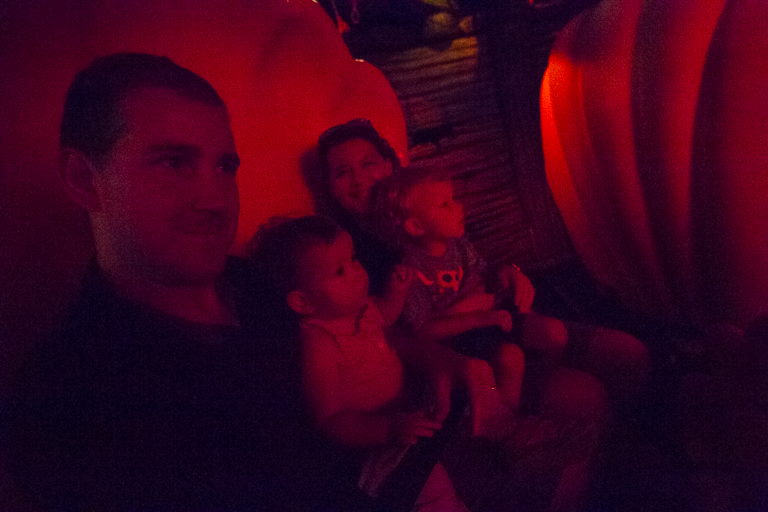 Oh boy. Where are we now? 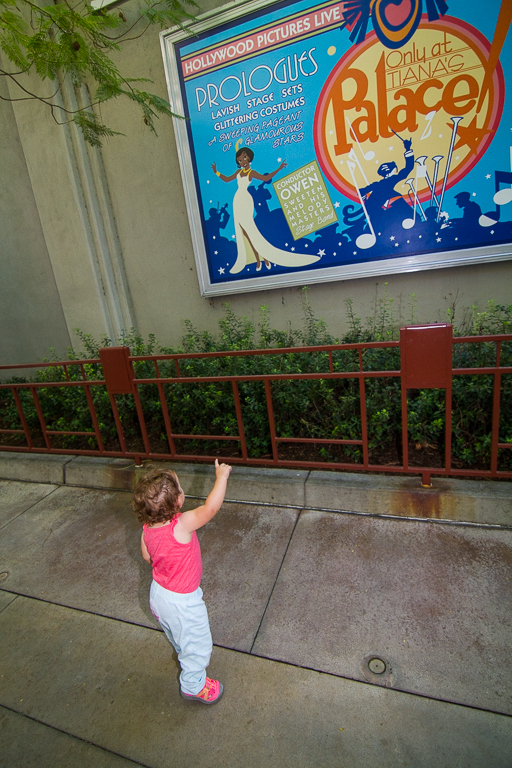 What are we thinking...? Taking the kids to an hour long sit down show... This is a first and it could be interesting. 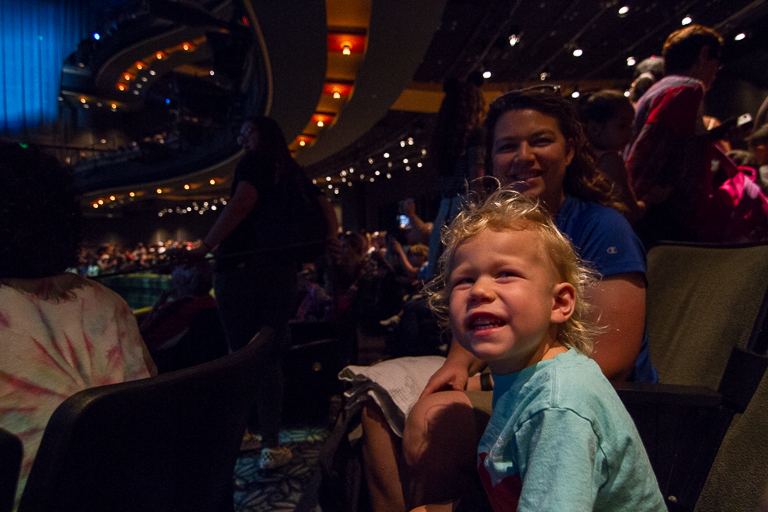 This is our very first time watching this show. We figured that since we're not seeing it with friends, if either of the kids get rowdy, we can leave without impacting anyone. 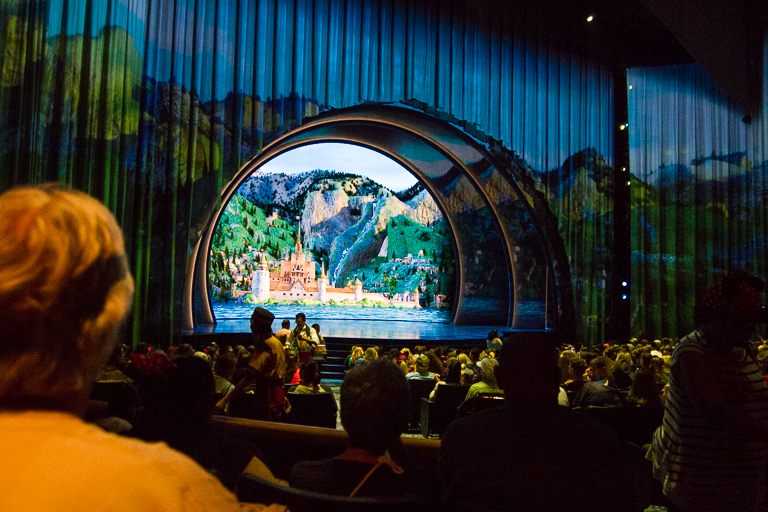 What were we so worried about? Alli slept for the first 30 minutes, and Ian sat on T's lap and watched with interest. Of course he'd ask a question every once in a while about what was going on, but nothing disruptive.
After Alli woke up, I was a little worried that she might not be happy, but T was prepared with a bunch of snacks that kept her busy and distracted for the rest of the show. 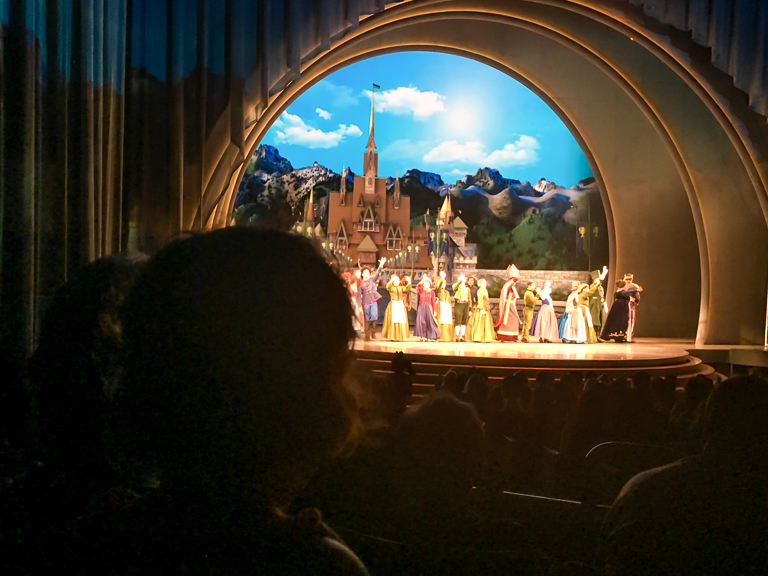 I got a text saying that our room was ready, so before dinner we headed up to get settled. I opened the door to the room and Eww, something is not right.
Without any prompting, Ian asked "Why is the room stinky?"
A very strong odor of cigarette smoke (in this non-smoking hotel), along with another equally strong scent that was trying and failing to mask it. Unacceptable for Disney's flagship hotel, so I headed back down to the registration desk to try to move rooms.
Upon arriving, I was told that the hotel was fully booked and moving was not possible. The registration agent went back to talk to his manager and confirmed there was nothing they could do. He asked our plans for the rest of the night and then offered to send up housecleaning to "refresh" the room while we had dinner. Okay... But if it still stinks when we get back, I'm coming right back here. That's fine, he said.

So, on to dinner. Our favorite place to eat at the resort is the Napa Rose. Ian's looking over the menu to see what he wants. We'd planned to do take-out and eat it in the room, but instead we did take-out and found a table just off the lobby to eat. An hour later, having finished our meal, we headed up to the hotel room. Would it be better? Nope! It still stinks just as bad. Time to head back to the registration desk.
At the registration desk, I finally talked to a cast member who really acted like she cared about our problem. She saw that despite being requested, housecleaning hadn't even come to the room to clean it up. Well that's disappointing. She confirmed that the hotel was fully booked. I asked her to check the Disneyland Hotel. Same story, fully booked. Paradise Pier? Also fully booked.
At this point T and I started discussing forgetting the hotel room entirely. There's no way we're staying in a room that smells that bad and paying $1000 for the weekend to do it.

The cast member left to go talk to someone and came back a little frazzled. Okay, I have a room for you, but you have to move right now! Not a problem for us. We hadn't even had our luggage delivered to this room, so within 1 minute, we could be out of that room. She gave us the key and off we went. Ah... This room is so much better.
So, to Disney Cast Member Hannah from Riverside, thank you so much for doing whatever you did behind the scenes to move our room.

By this point it was bedtime, but we're still needing to get all our luggage delivered. 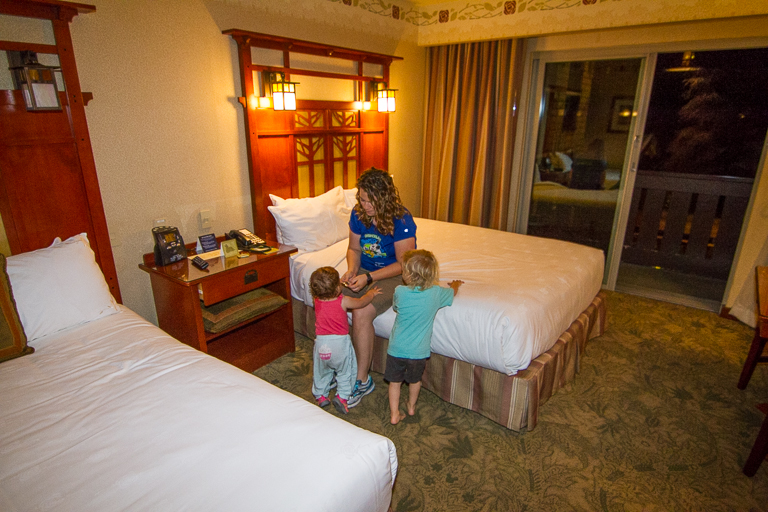 T found chocolates on the pillows that the kids really enjoyed. 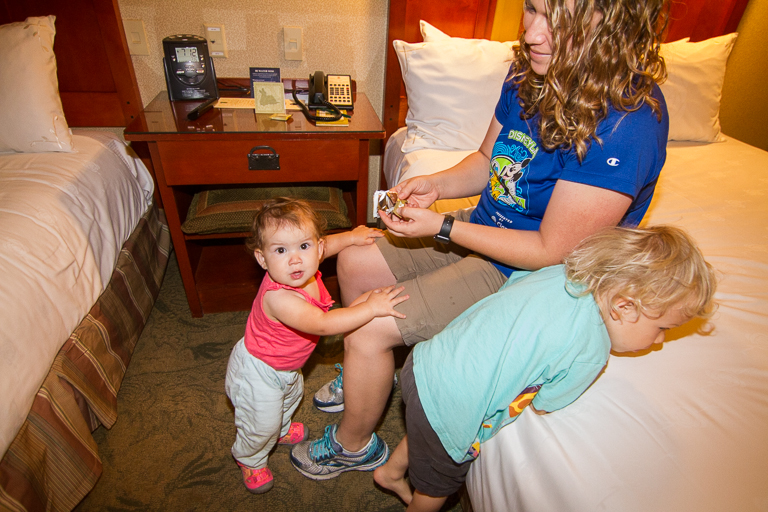 Our view looking out into the courtyard where the monorail goes by. Every 10 minutes or so, a monorail would come by, and if we were out on the porch, Ian would insist on being picked up so he could wave. 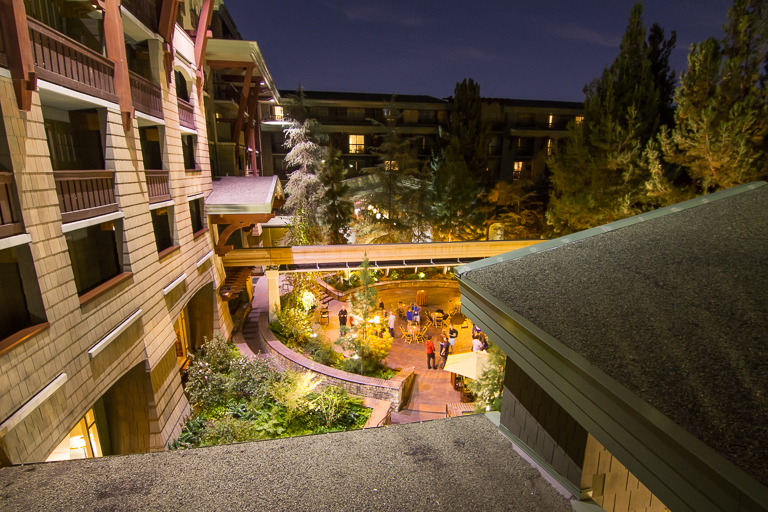 They both liked being out on the porch. 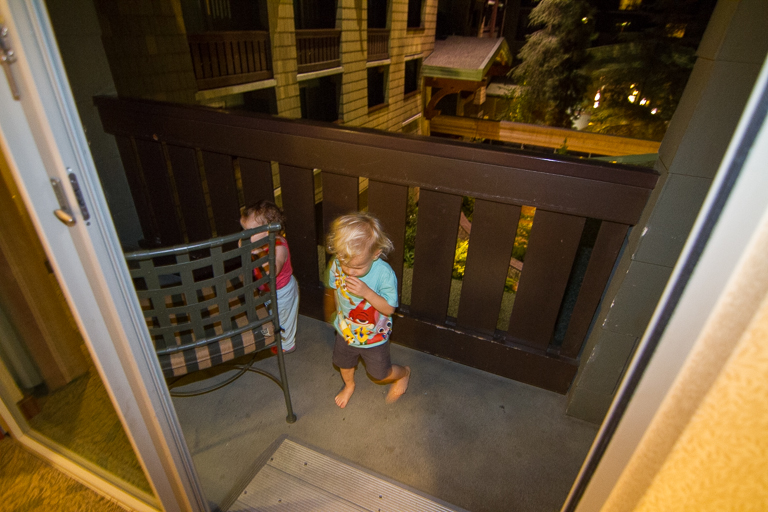 Alli found a little seat.
After getting the luggage delivered, we set up the cribs and the kids both fell asleep quickly. 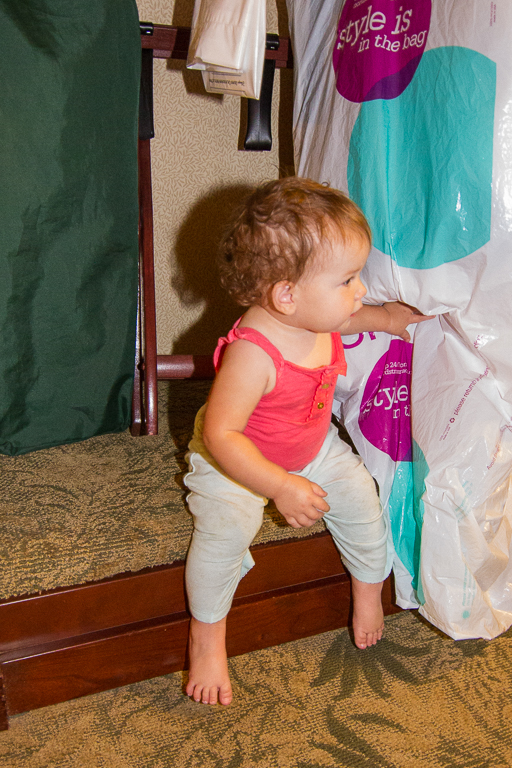 T and I spent a little time out on the balcony, catching a small view of the fireworks before finally going to bed. 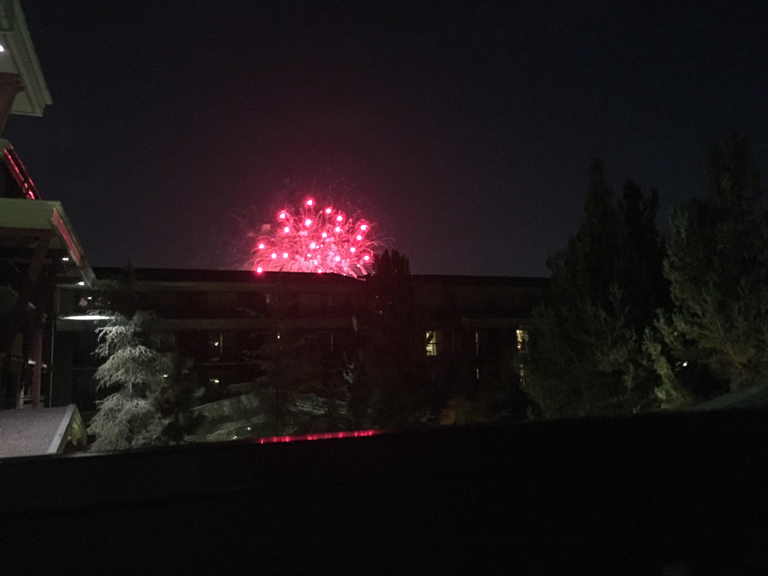