Theresa was busy today, but there's no reason why I can't take the kids to Disneyland solo. T packed everyone a snack bag, we loaded in the car, drove to Disneyland, waited 15 minutes to park, and then walked through Downtown Disney to get to the park. First up is California Adventure.
Alli picked out our hats for today. I've got a great Jafar hat. I was surprised how much positive attention it got today. Lots of people loving the hat. And when people saw that Ian's hat was the Genie, he got a lot of positive comments too. I had no Jasmine hats, Alli settled for a princess hat. In this case Princess Minnie. 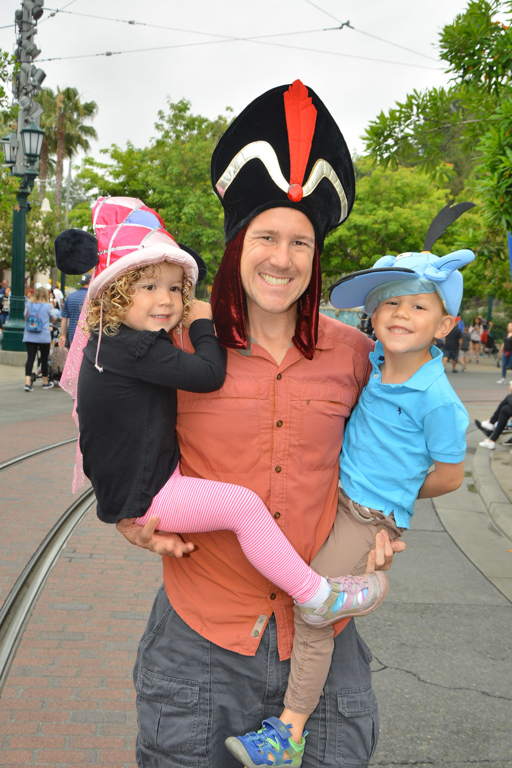 Despite arriving at the parking garage by 8:15am, it was 9am before we made it into the park. Our usual MO is to get a fastpass for Toy Story and then kill time until it comes up. Today though, Toy Story must be pretty popular because we couldn't get a fastpass until noon.
Our first stop of the day was Mater. The line was surprisingly backed up, even this early in the morning. We soon learned why. Mater was operating at half capacity due to a problem with one of the tractors on one of the sides. I'm glad it doesn't take the whole ride down when only one side has a problem. 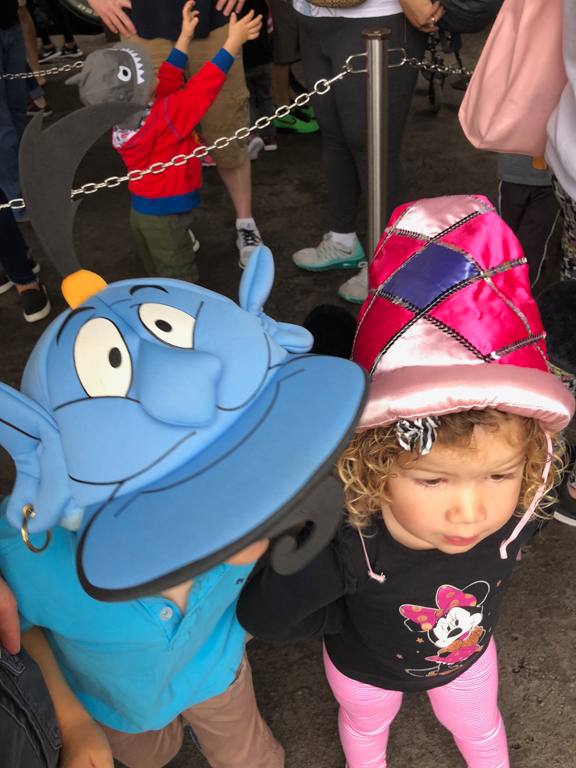 As we were waiting in line, it started to drizzle and for a few minutes started coming down even harder. The three of us had a wet but fun ride on the baby tractors. 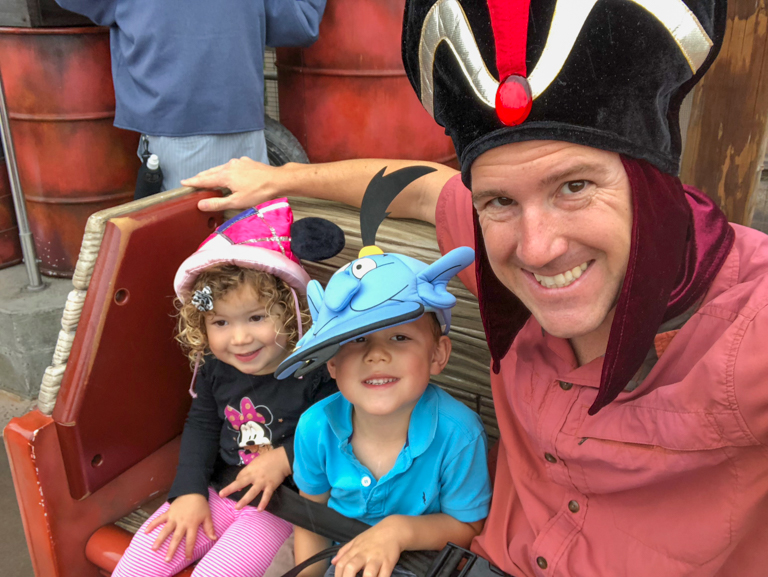 Who ordered this rain? 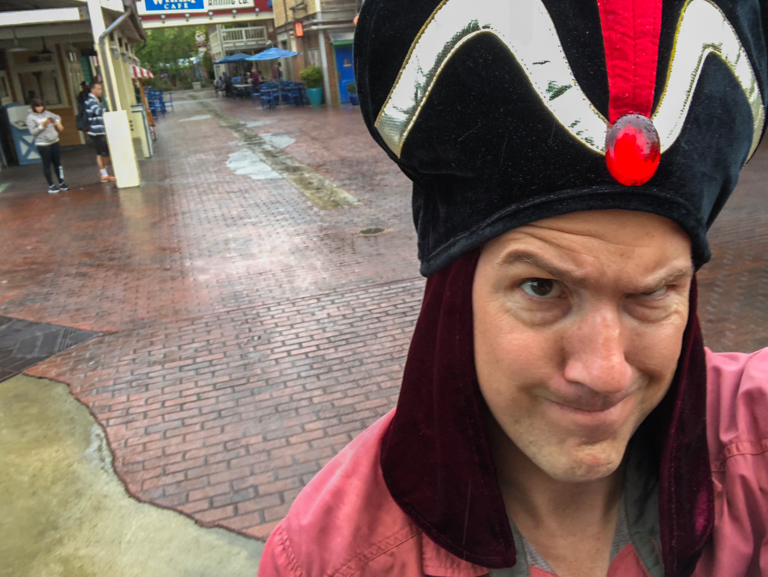 I know a queue that's entirely out of the rain and the ride is entirely indoors and will take a few minutes. Ariel! Alli was especially excited when we lucked into the pink clamshell. She's loving all things pink. 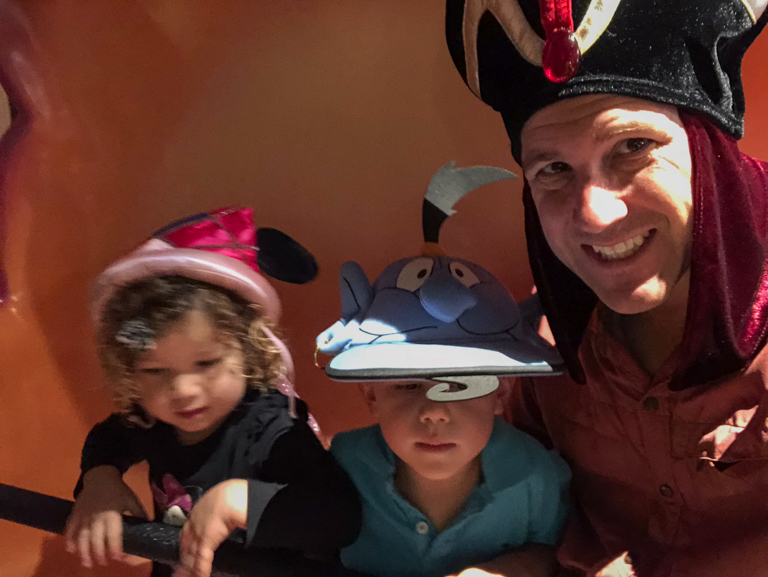 Now that the rain had cleared up, everyone made their way into A Bugs Land. We've got to enjoy these rides before they disappear. On Flik's Fliers, I asked the kids if they wanted to sit together, but Alli was quick to hop onto one side and start buckling herself in. "I sit by myself. I'm a big girl!" What a face. 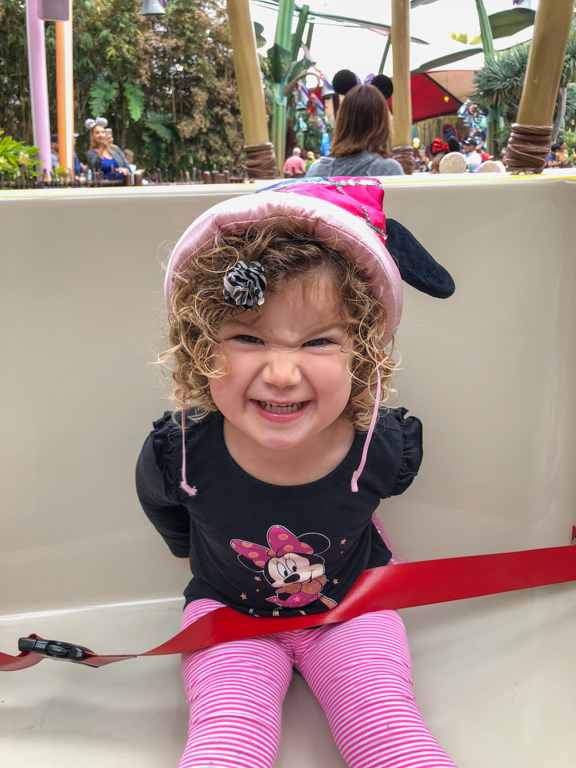 That's fine. Ian and I will sit together and enjoy the ride. 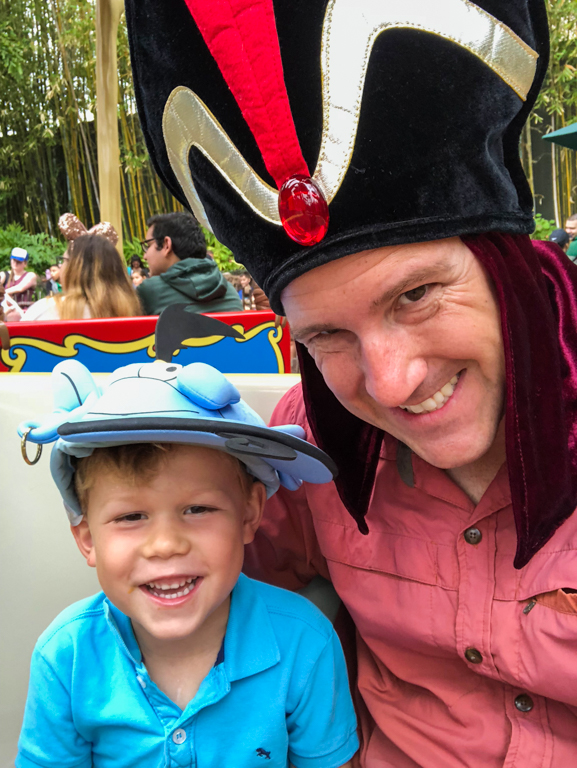 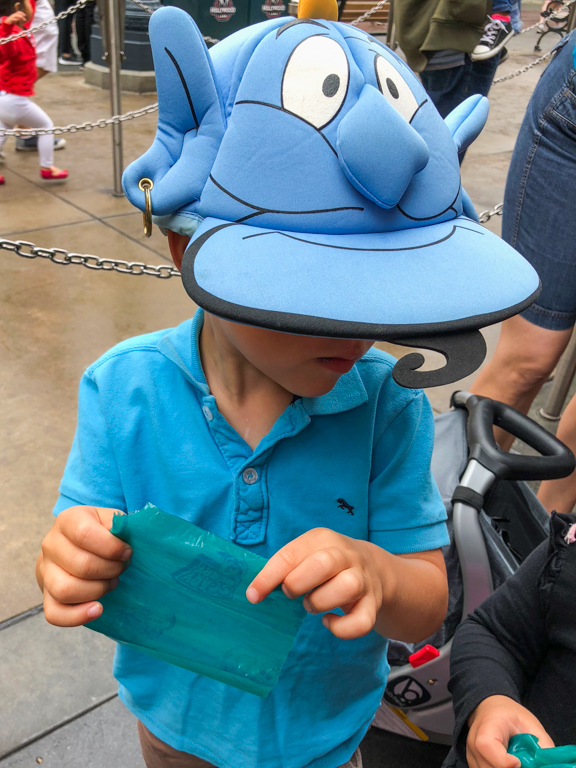 Not having T here, I wanted to do a few things we wouldn't normally do.
After getting the Disney Junior Music Dance Party CD from Ruston, we've been listening to it non-stop. I couldn't wait to take them to the Disney Junior Dance Party at DCA. While the other kids were dancing and moving around, my kids were content to sit there and watch. But bring out the confetti and they were quick to grab handfuls. Perhaps another viewing will help them get into the dancing. 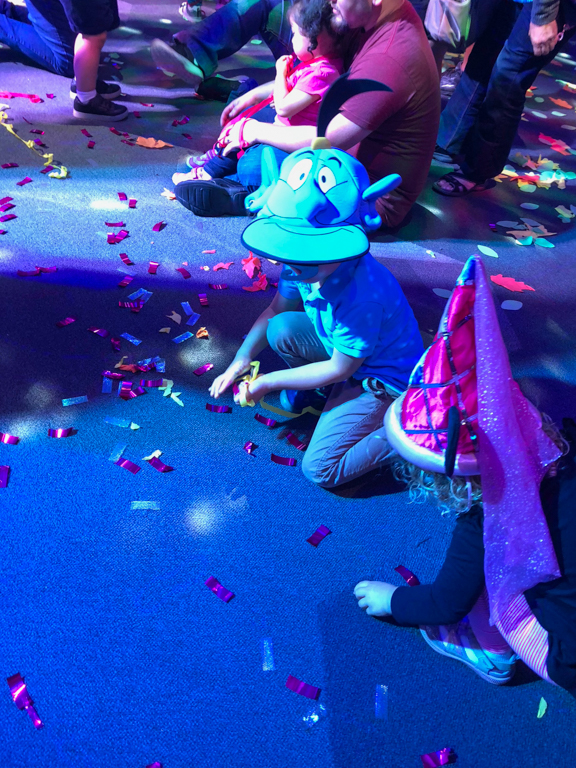 After hitting 42 inches last week, Ian was wanting to ride some of those rides again. I told him no one was there to watch Alli so it wasn't going to work out this week. Being a quick thinker, he asked if he could do the swing and Alli could watch from the side. Can't argue with that logic. Over in the Redwood Creek Trail, Dale and Chip were wandering around. Dale saw the Jafar hat and started holding up his hands and backing away. I told him that Genie was here to protect him and Dale felt better. 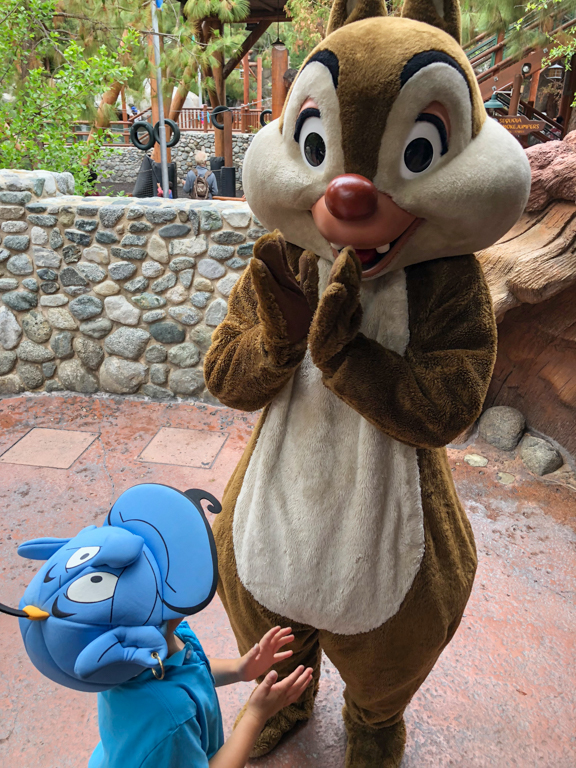 After a short wait, Ian had another fun swing on the zip line. It was then that he noticed the ropes above the zip lines. 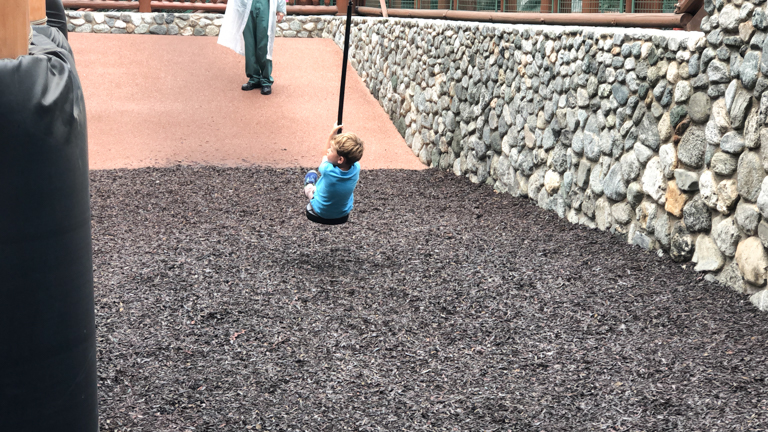 Alli and I followed Ian through the rope course though Alli's shoes aren't quite big enough for the holes, and she got stuck a couple times. 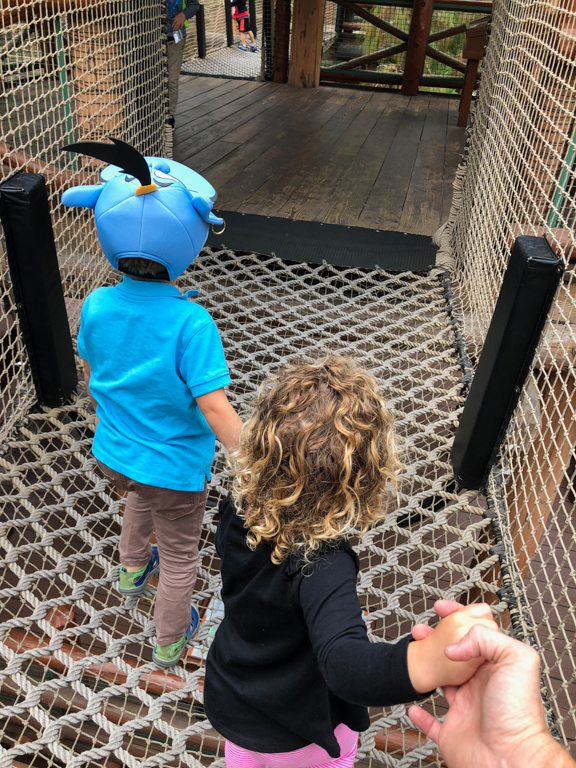 Finally our fastpasses for Toy Story were ready. Ian's not quite old enough to ride by himself, so the three of us hopped in the same row and started shooting. 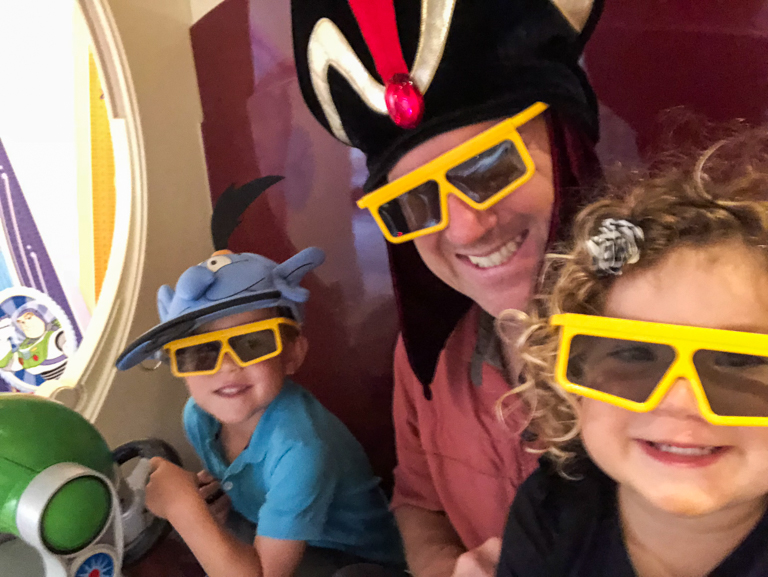 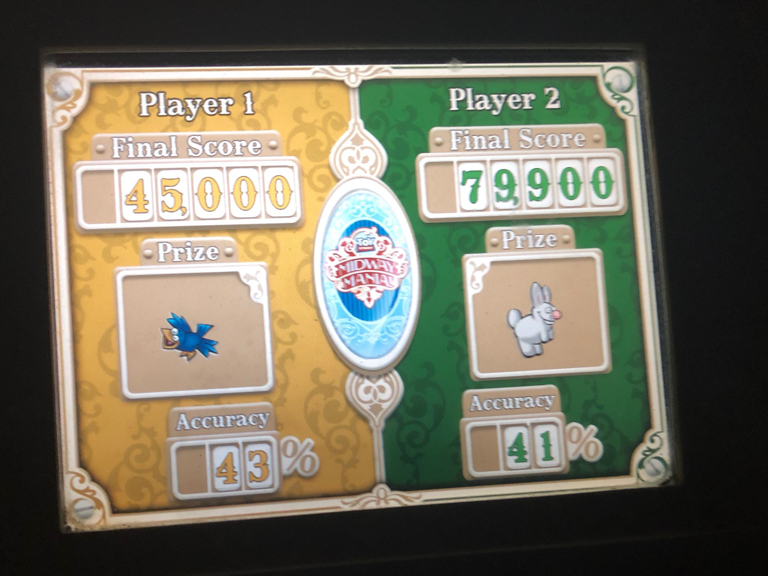 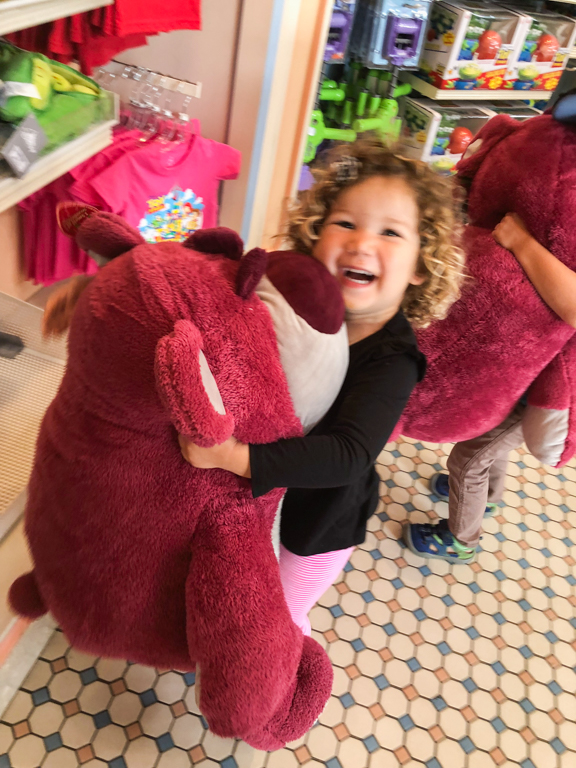 Never one to turn down a photo pass photographer, Ian and I took a few more Genie and Jafar pictures. Genie - I'm free! 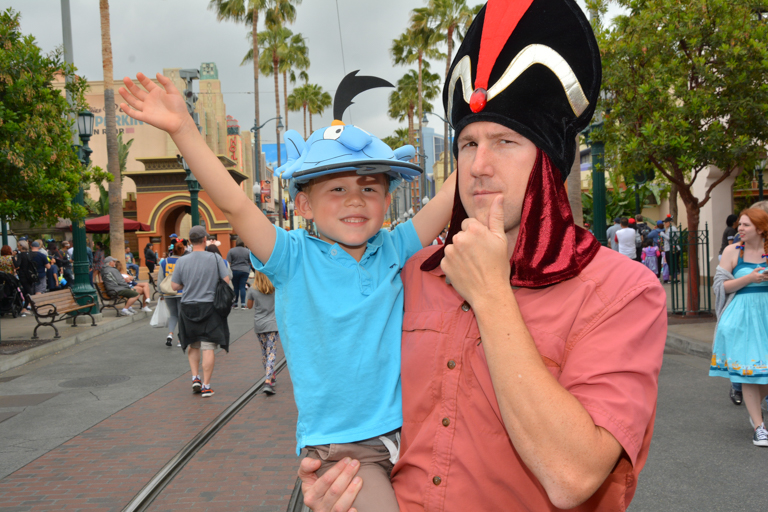 After DCA we walked over to Disneyland to take a ride on the Ward Kimble around Disneyland. I parked the stroller at the entrance and we waited for the train to arrive. 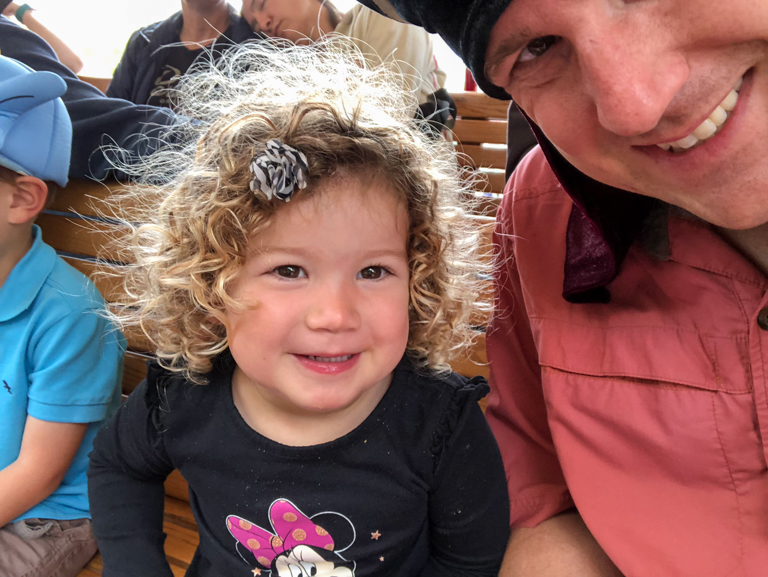 I was thinking we'd make it all the way around and see the dinosaurs, but as we approached the Toontown station, Mickey and the Magical Map just started seating. I asked the kids if they wanted to see it and they both said yes! 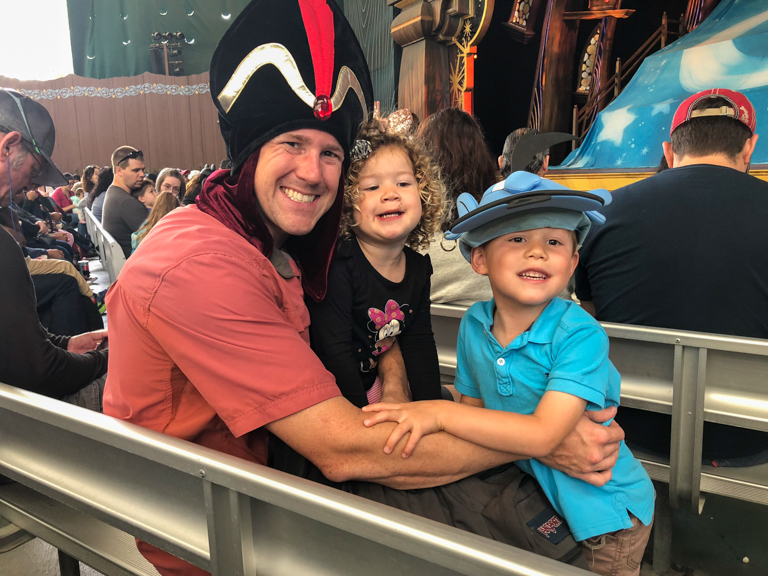 Both enjoyed seeing all the characters coming out and singing, especially Stitch. And you can't go wrong with tons of confetti streamers at the end. Not surprisingly the railroad station was slammed as soon as the show let out. With the stroller at the front of the park, the kids and I started walking. 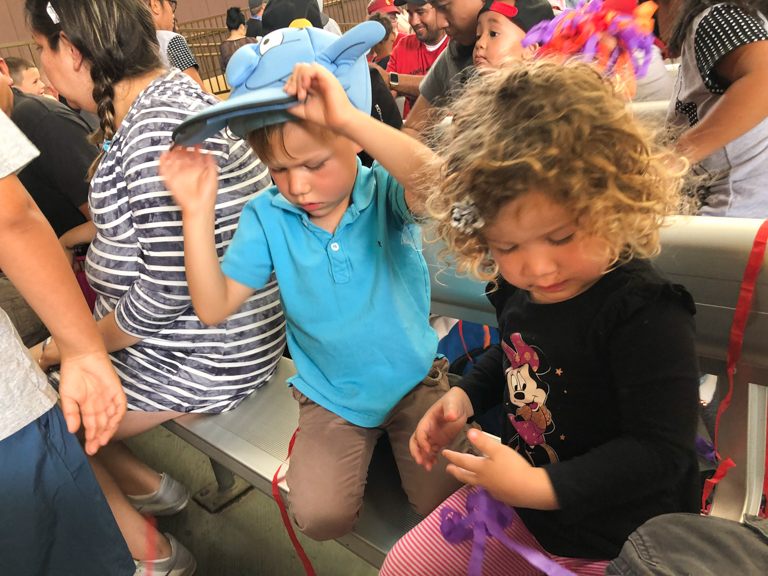 Once we got to the hub the horse trolleys were running to the front of Main Street. We always wave when the horses go by, but never take a ride. That changes today! 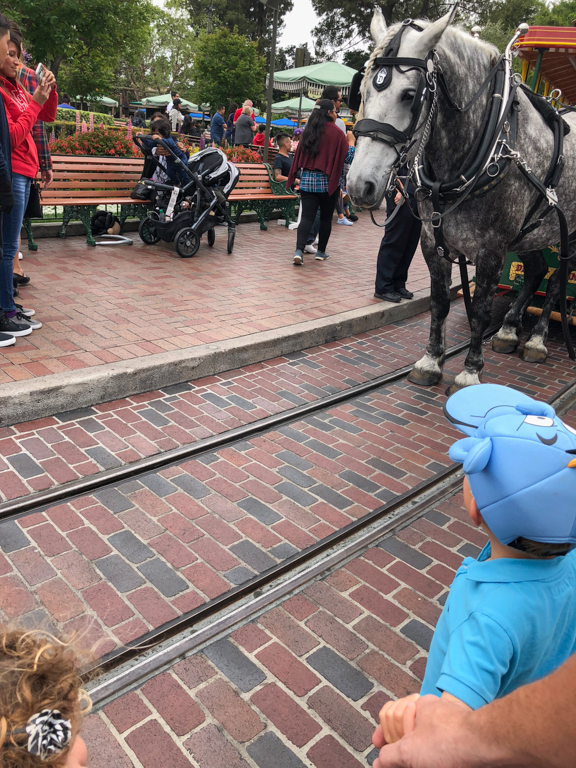 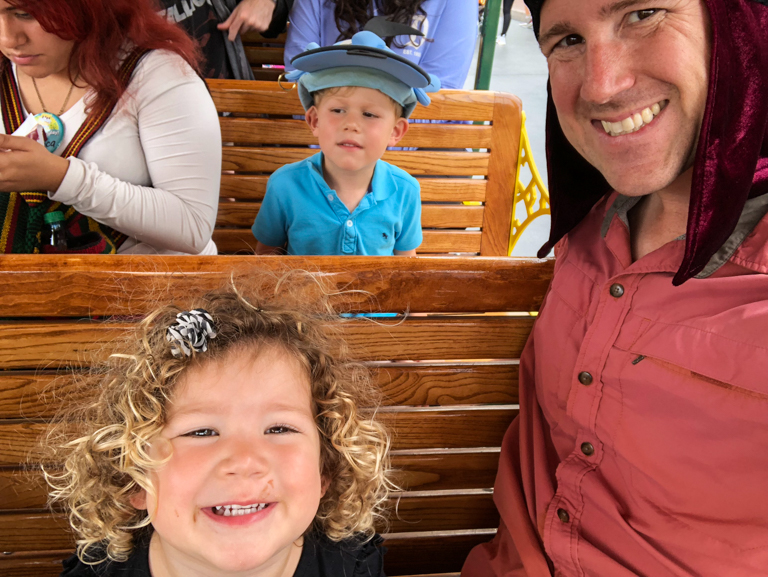 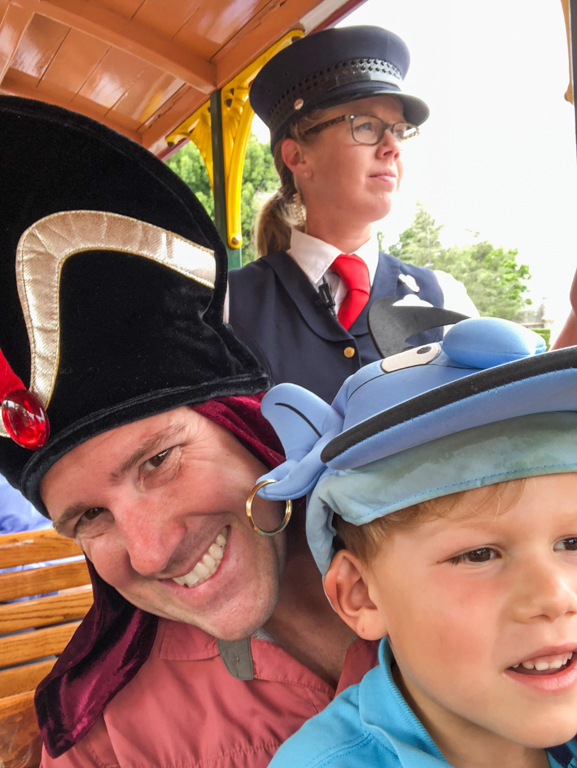 Stopping for photos one more time. Jafar looms over genie and the princess. 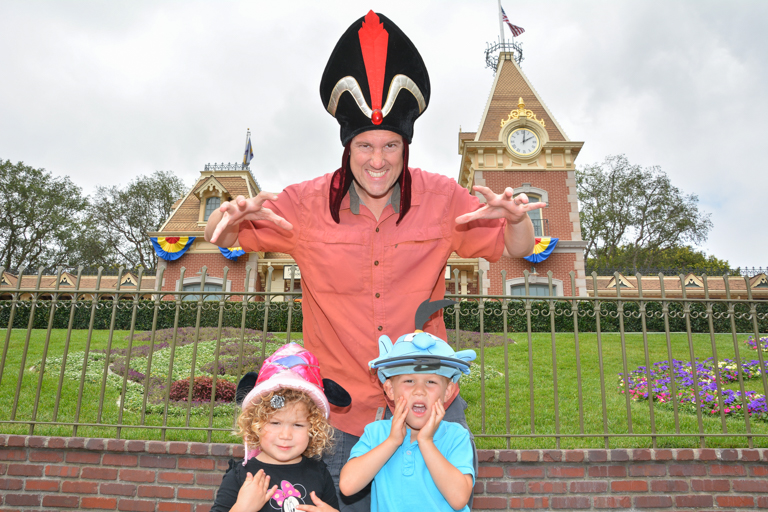 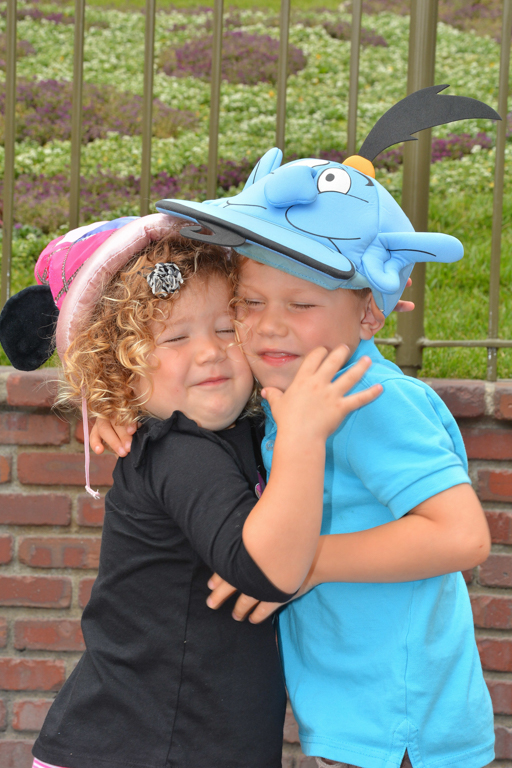 I had a great time today guys! Today was a lot of fun! 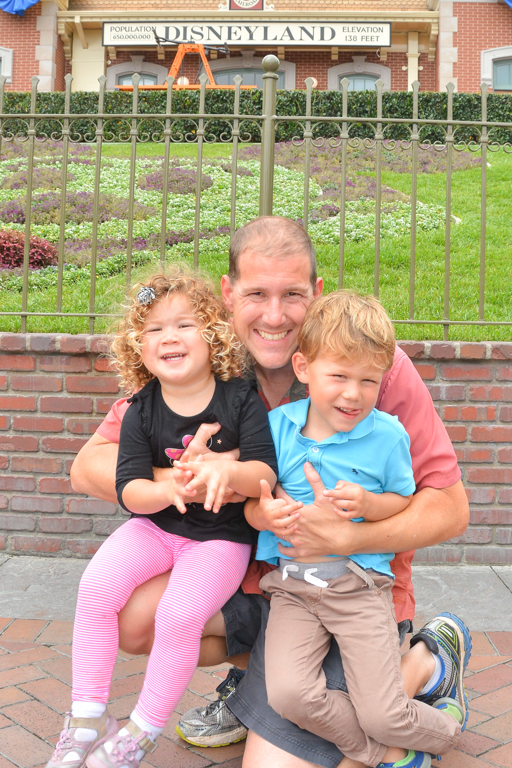