Huntington Beach with Patrick and Megan

My brother Patrick and his wife Megan are visiting Huntington Beach for a relaxing vacation. Ian, T and I decide to crash their party and visit them while they're close by. 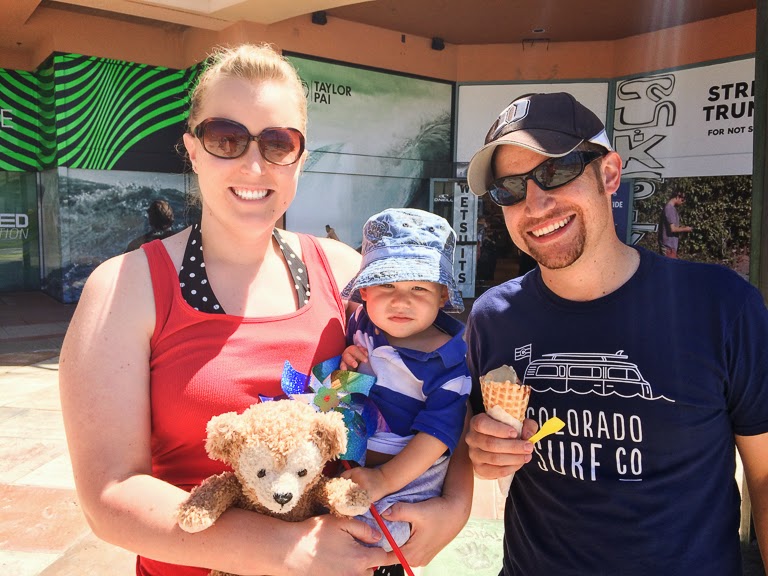 Huntington Beach is about a 45 minute drive from us, so we woke up early and piled into the car for the drive.
It may look warm and sunny, but the temps are in the low 60s and wind is whipping. The flags on the pier aren't slack at all. 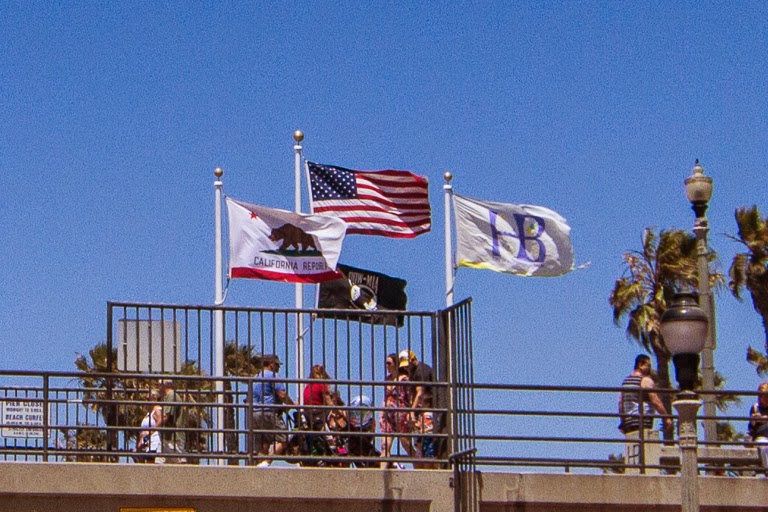 Ah, how I miss beach volleyball. Probably tough in this wind, but any day playing volleyball is better than not. 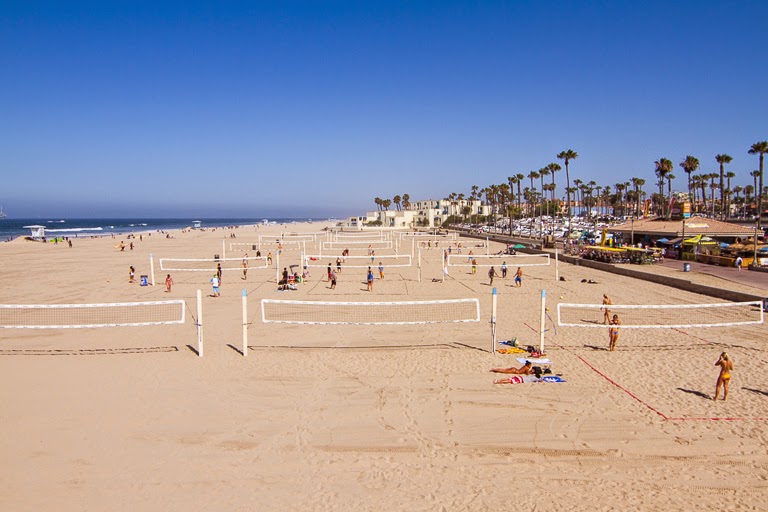 This store set up on the pier was making good use of the wind. There's a bunch of garden spinners and porch flags, you're sure to find something you like. 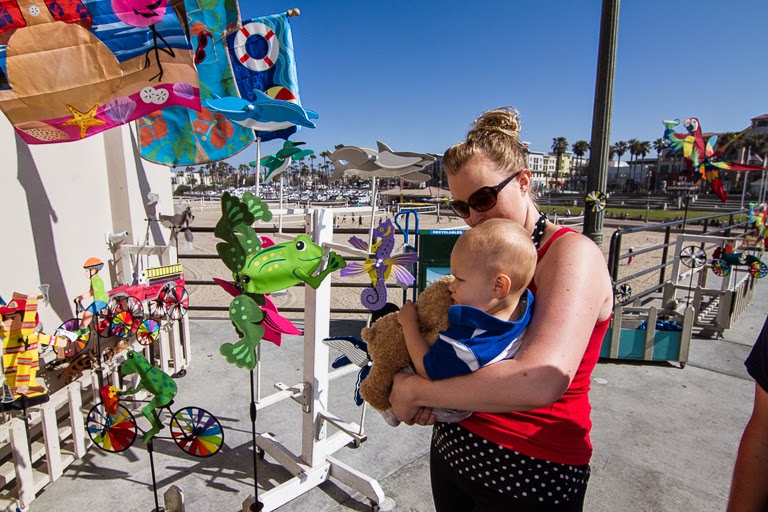 I'm sure this Corgi will be going home with Megan before their trip is over. Why a dog has wings though, I couldn't tell you. 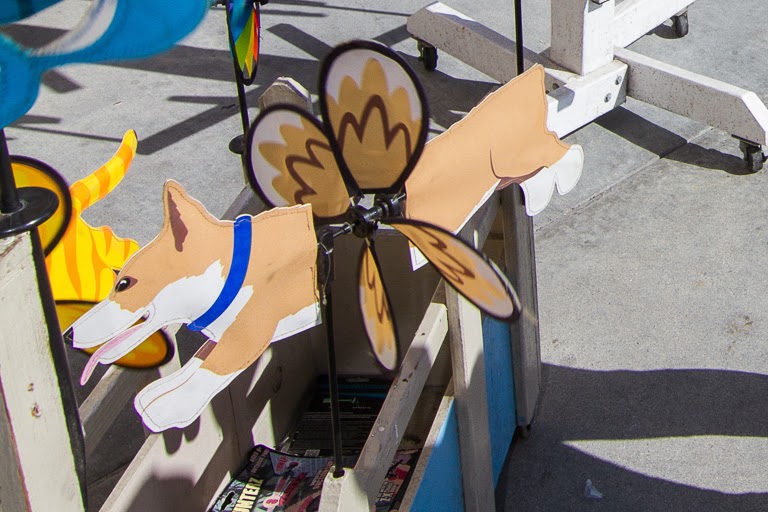 And it looks like Ian found something he likes too. These pinwheels were sitting right by the door. He was fascinated and his Uncle Patrick spoiled him and bought him one. 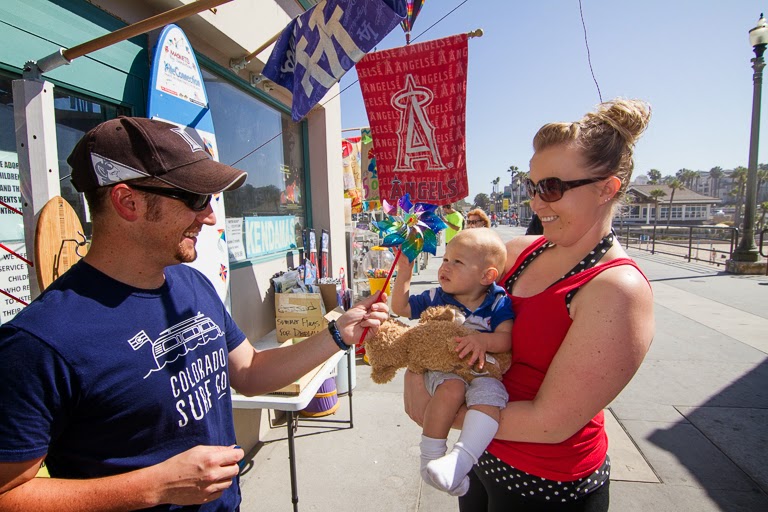 Watching it blow in the strong breeze. 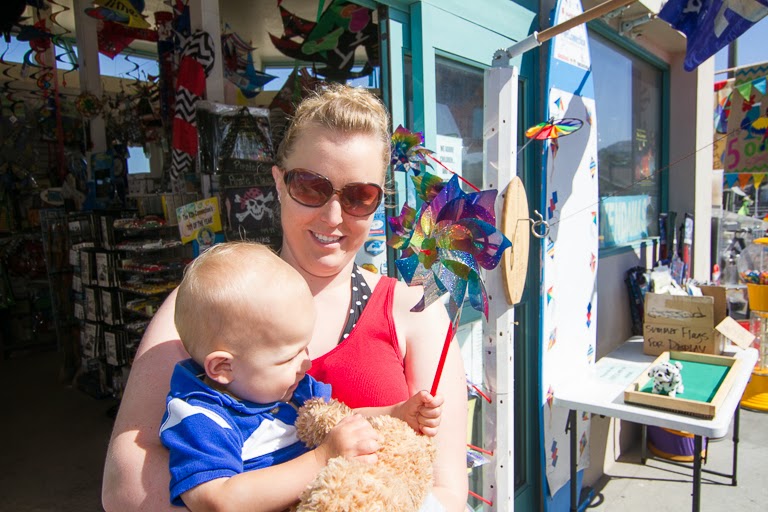 As we walked down to the end of the pier some military helicopters flew over. Ian loved it and made sure to point them out. 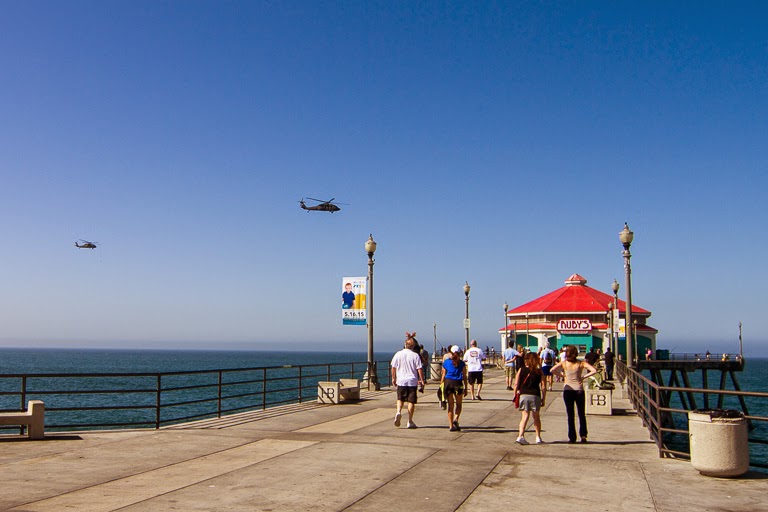 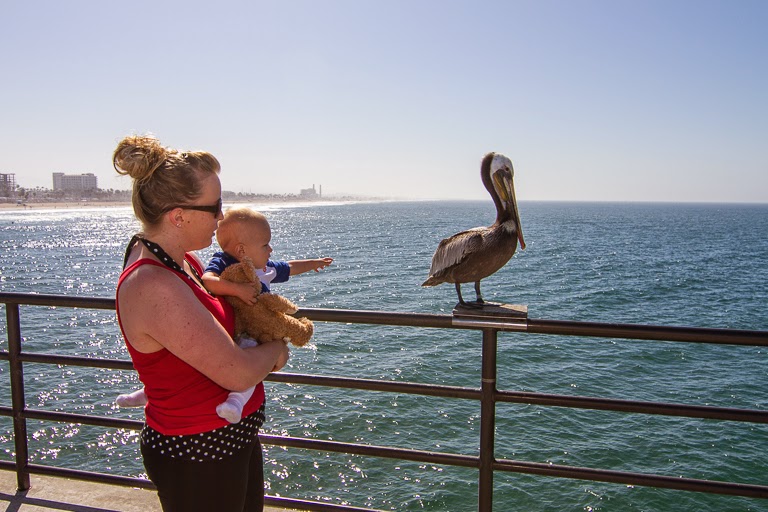 Unfortunately we don't have too long to spend here today, so we headed back to the apartment they're  renting before leaving for an early lunch. 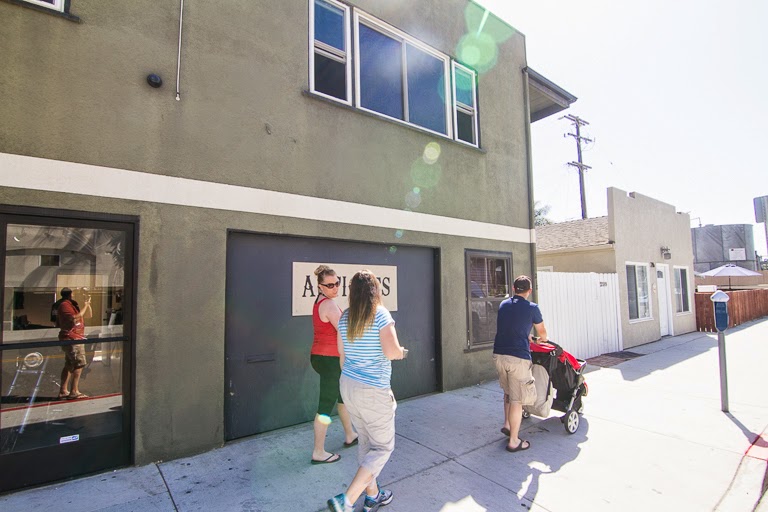 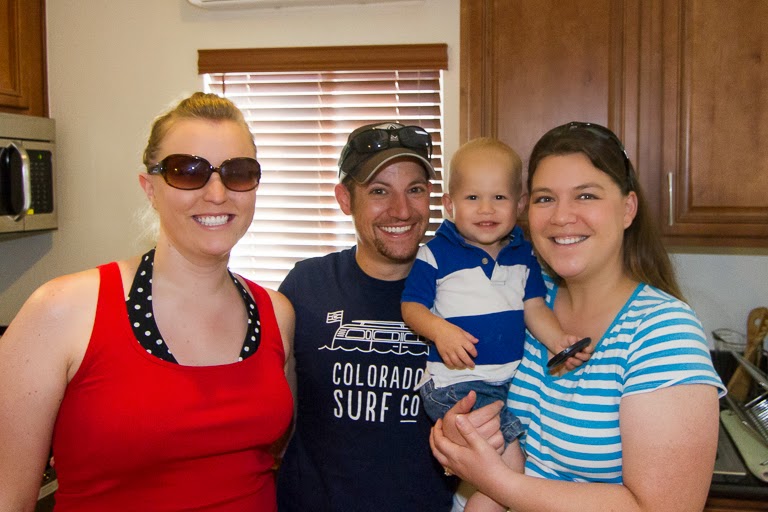 Pat and Megan are going to be hanging around HB for the next few days, so we figured it'd be nice to go somewhere they couldn't without a car. Megan was in the mood for Mexican and the Fiesta Grill received top marks on Yelp. It's a little hole-in-the-wall shop with your typical mexican food. I wouldn't say the food was anything special, but the service was outstanding. 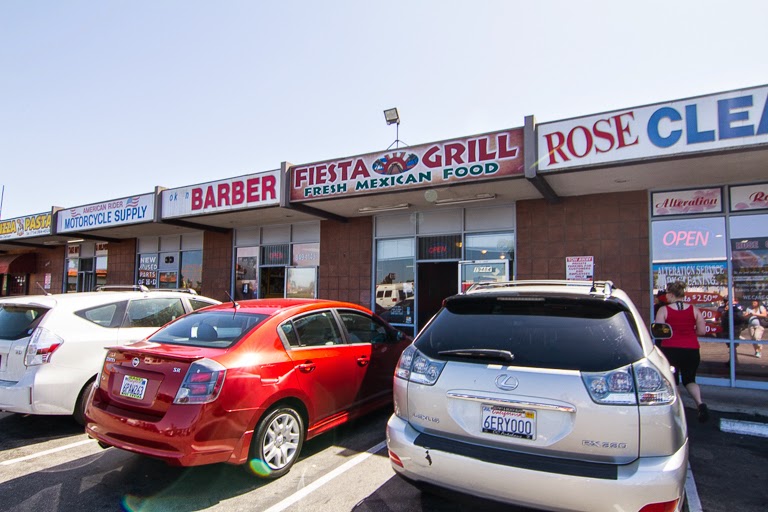 Ian was distracted from eating by these guys in uniform. Who are they? 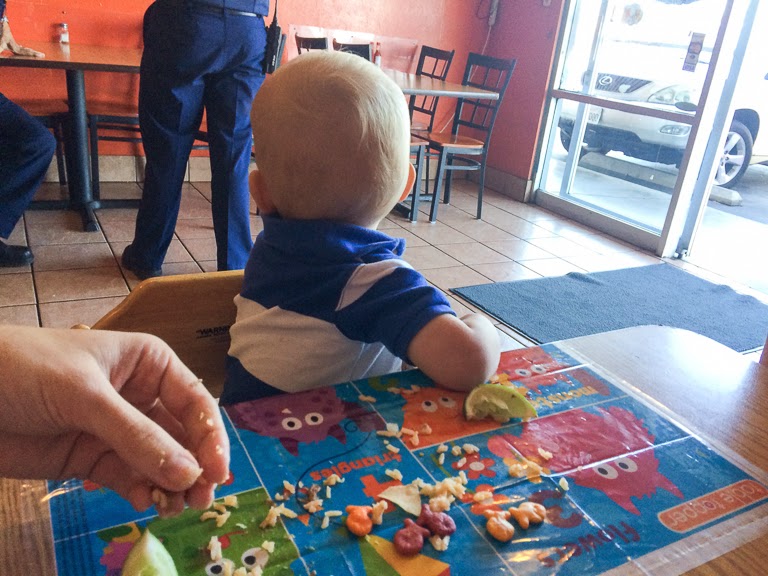 Firemen! We walked by their big truck on the way out. 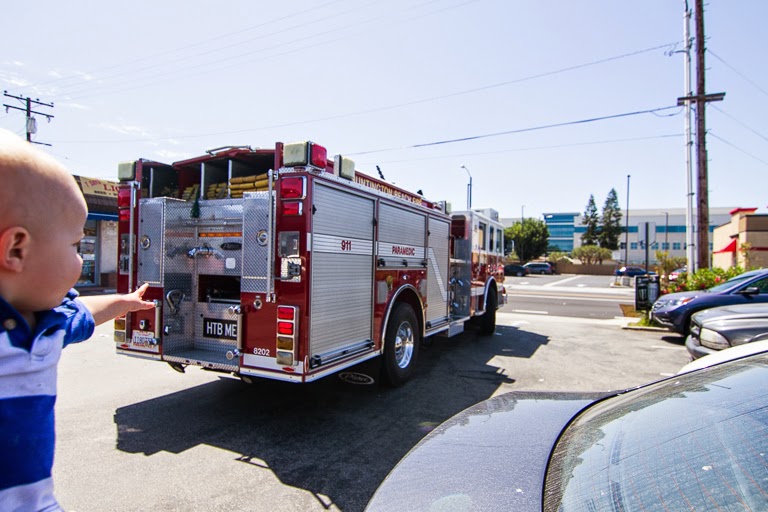 Sufficiently well fed, we drove back to the apartment and headed back out to wander near Huntington pier. How about a little dessert after lunch. Mangiamo Gelato Caffe was calling us to it and we were happy to listen. 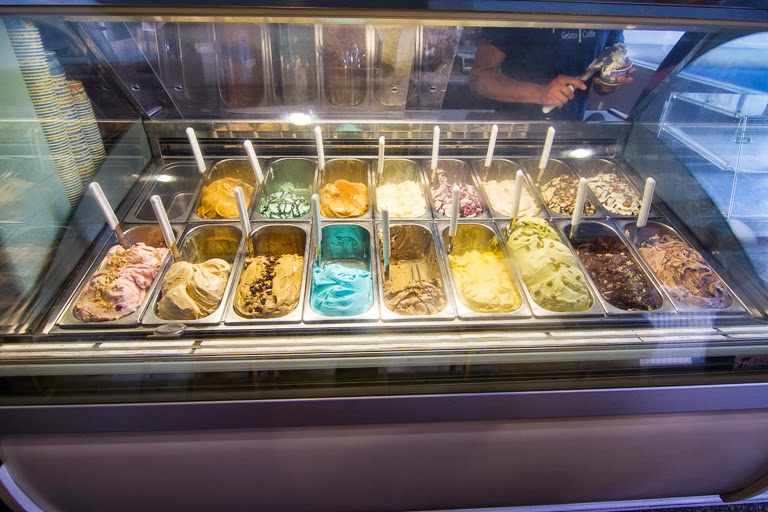 So many delicious flavors to choose from. Ian loved the flavors I chose. He's usually a very picky eater, but he was opening wide for Nutella gelato and Almond Joy gelato. 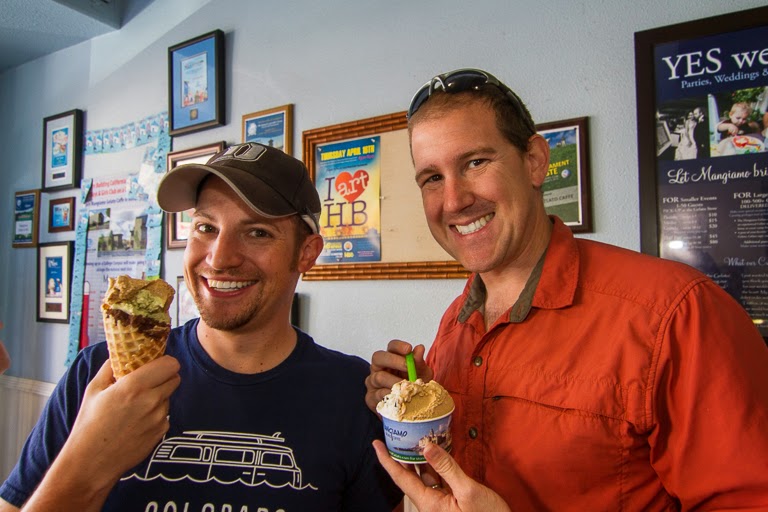 Posing in front of the Duke Kahanamoku statue near the pier. Patrick was happy to pose with anyone named Duke since his Duke Blue Devils recently won the National Championship.
Megan has to be commended for carrying Ian. I brought a stroller, but Ian spent just about the entire trip in her arms being carried. 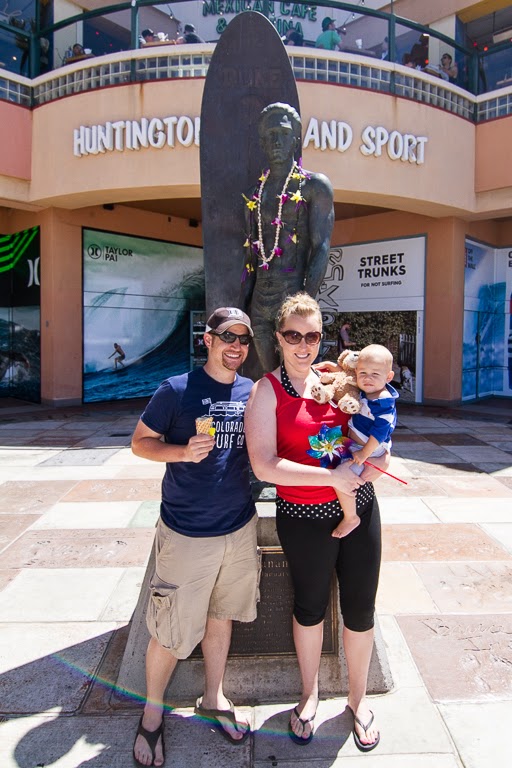 Next the five of us wandered down to the sand to watch some volleyball. 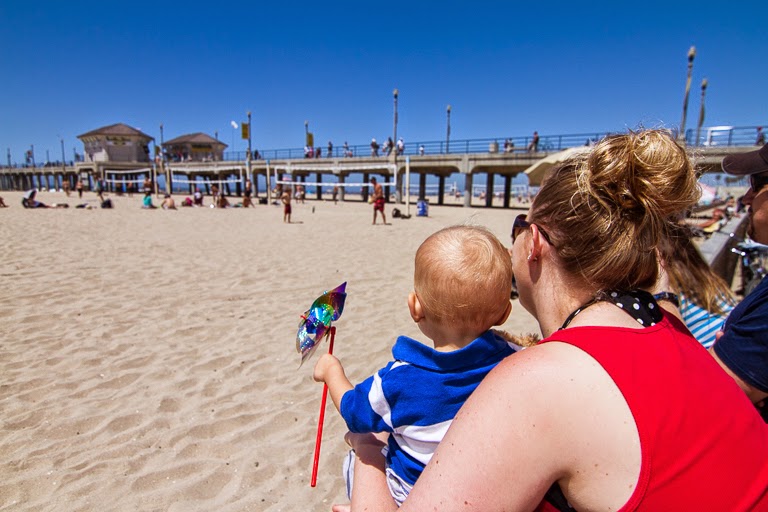 Ian sure was longing to be in that sand playing... 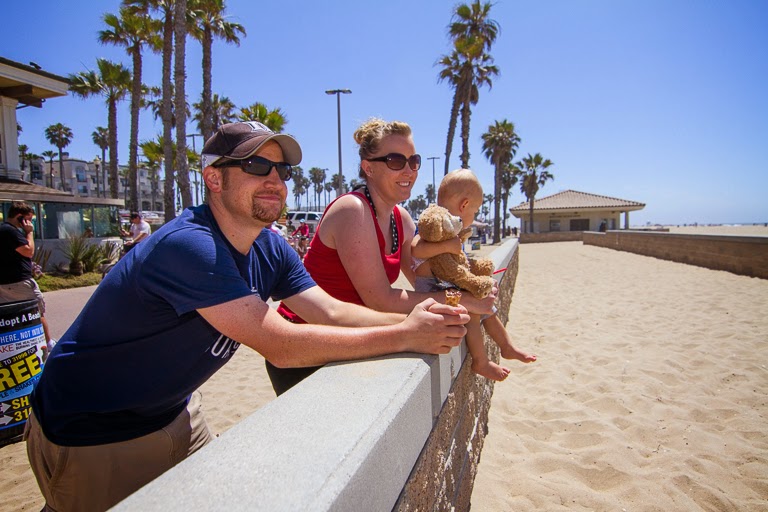 And Megan obliged him. Duffy obviously felt he needed some color and was sunbathing. 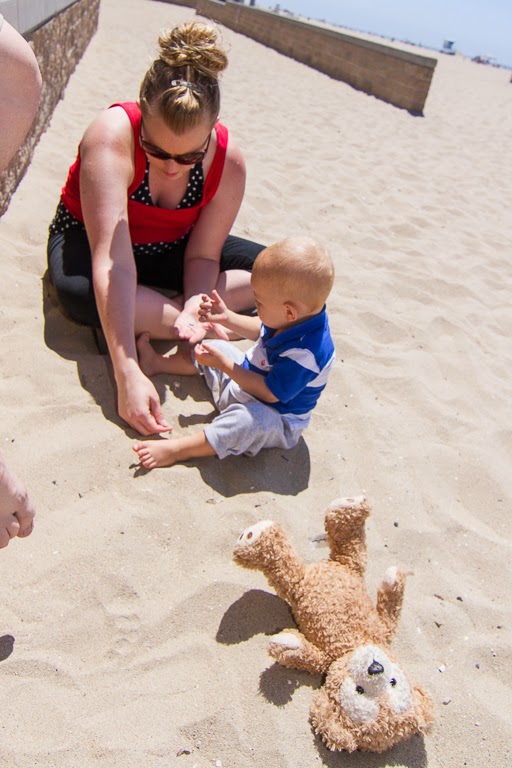 Trying to bury Uncle Patrick's foot in sand. It's going to take a while. 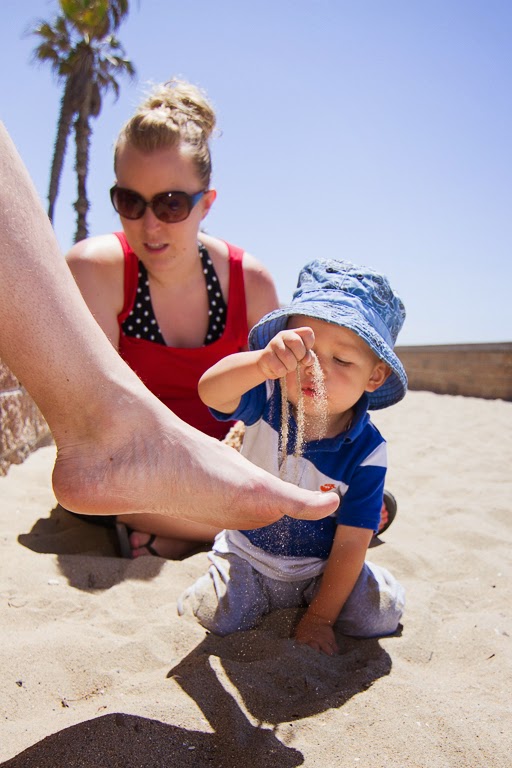 Back at the apartment, Ian was showing them both that it was nap time. 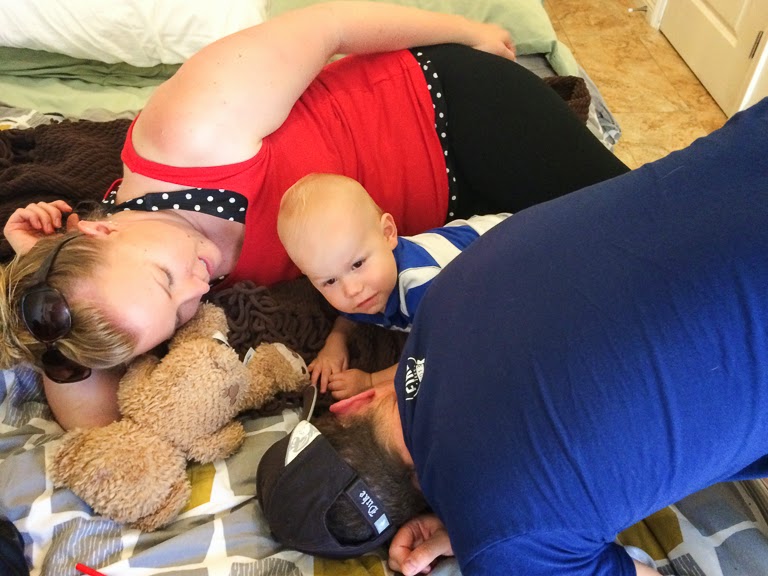 Ian gave his goodbye hugs and kisses to Megan. 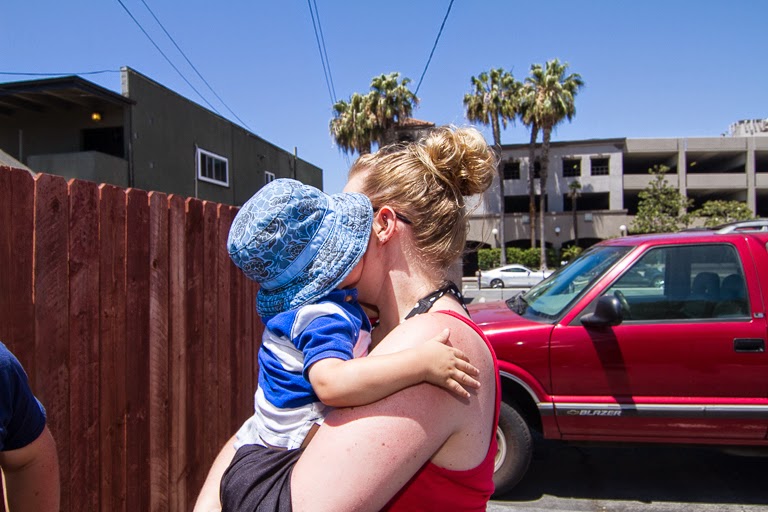 And a great big sloppy kiss for Uncle Patrick. 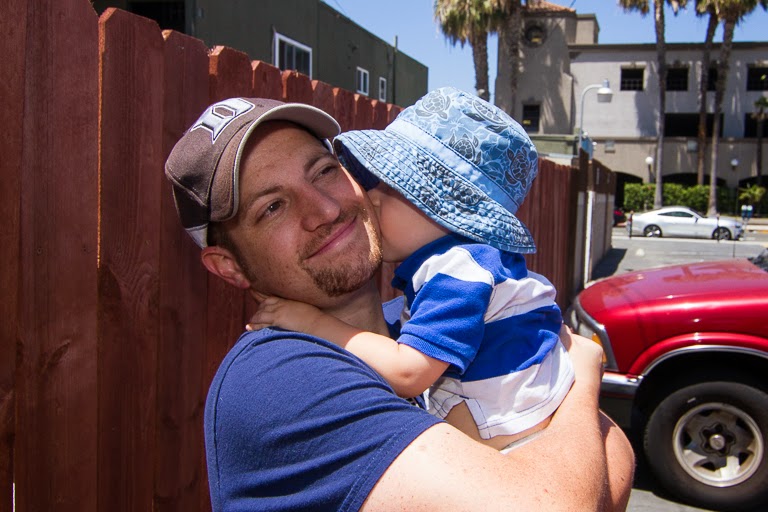 We left the parking lot and before we got more than a few blocks away Patrick called, letting us know that Ian left his Duffy bear on their bed. A quick turn around to pick that up, and Ian was already asleep in his carseat.
Posted by Joe at 12:30 PM