It's the Christmas season, so it's time for the annual decorating of the house. Ever since owning a home, I've liked to go big with lights. Every year I try to add a little something more, so it's constantly growing. Check out what's new this year. 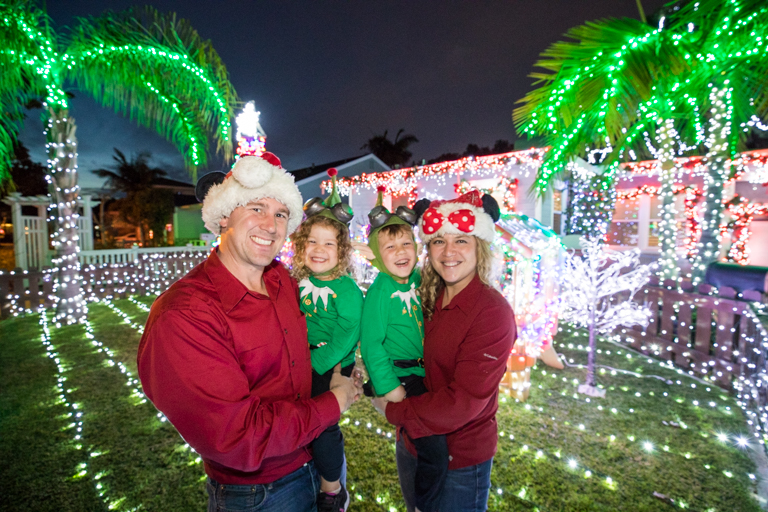 With this many lights, it takes a bit of time to get everything put up. Thankfully I've got some good helpers. Alli was helpful bringing lights from storage into the driveway. 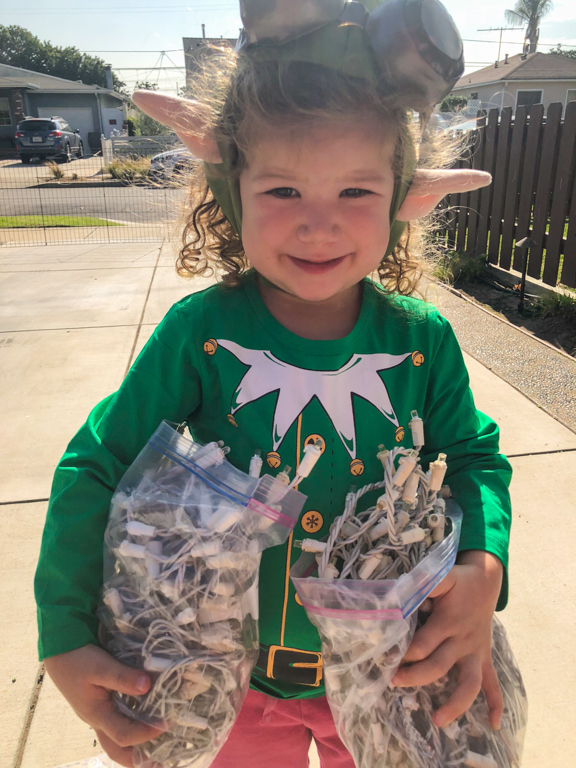 And both Ian and Alli were helpful lining things up. Pro Tip: if you leave the light strands in the sun to warm up, it will be easier to untangle them. Ian helping me out to find just the right clips to go on the roof. Instead of doing one big push to get it done in one day, the lights went up over a series of days. A little here, a little there. The kids love the giant LED tree. 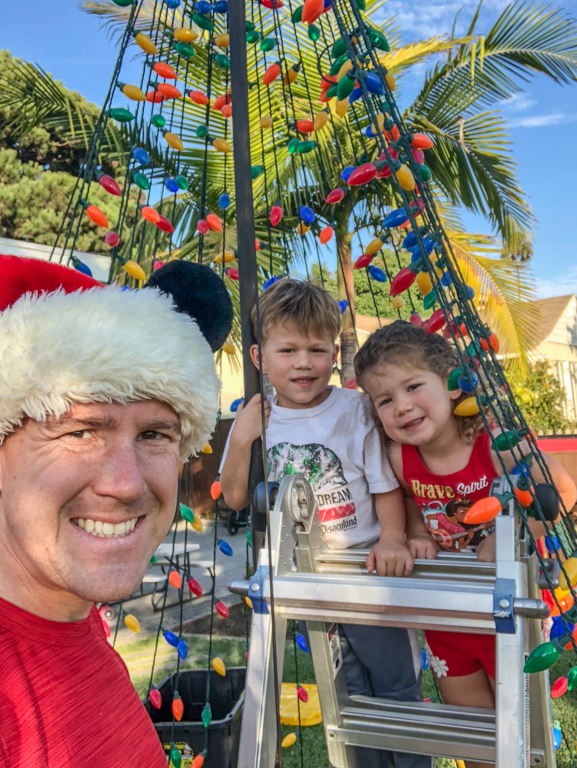 They run around the inside like it's a merry-go-round. 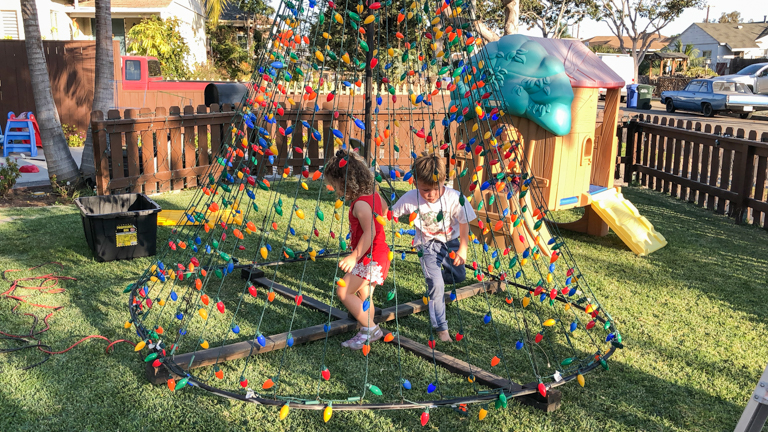 Can't forget the homemade star that goes on top. 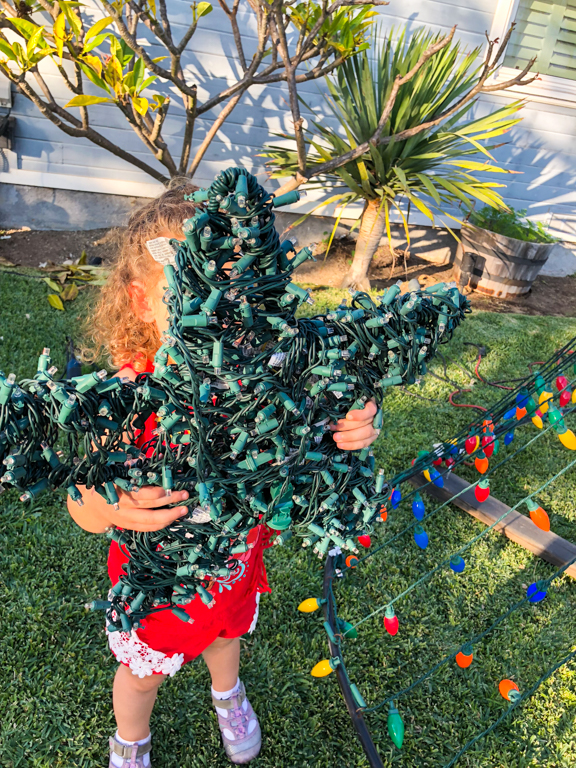 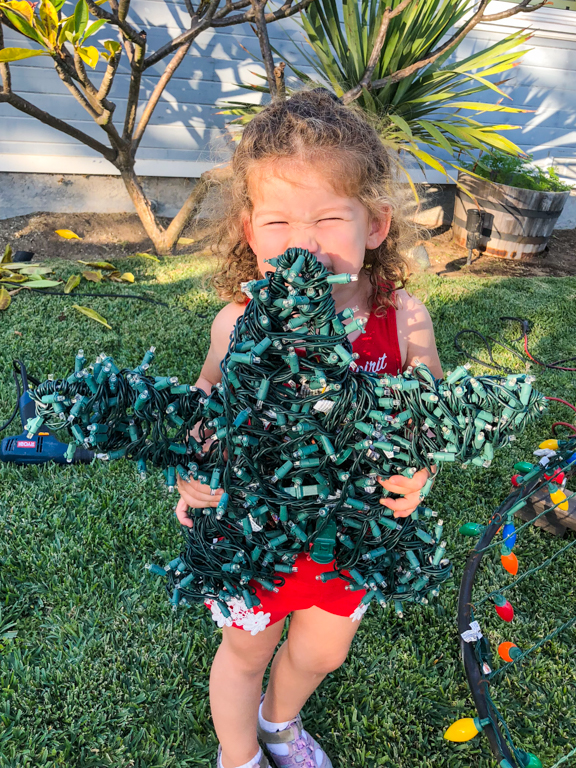 Like I said, I've got some great helpers. Alli in particular was always quick to run behind me when I said I needed help carrying something. These strands of garland are going to look great on the roofline again. 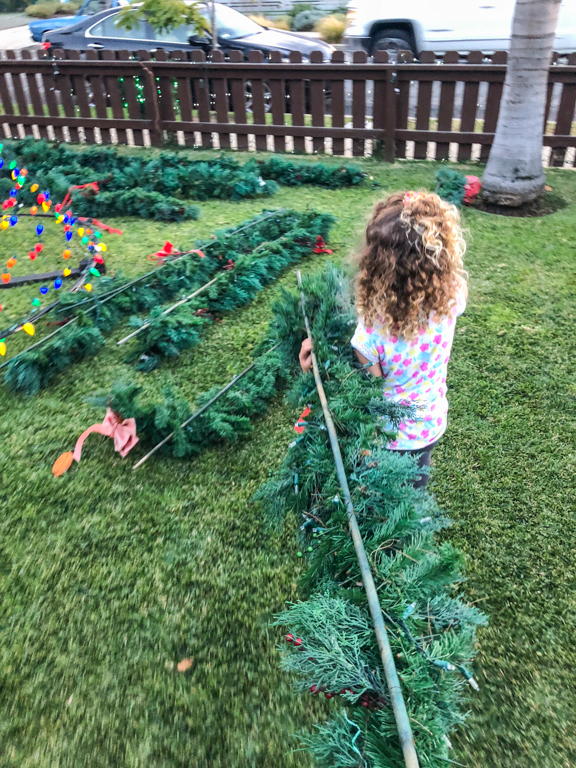 I was especially glad to have my brother come visit. Decorating the palm trees is so much easier when there's two people doing it. 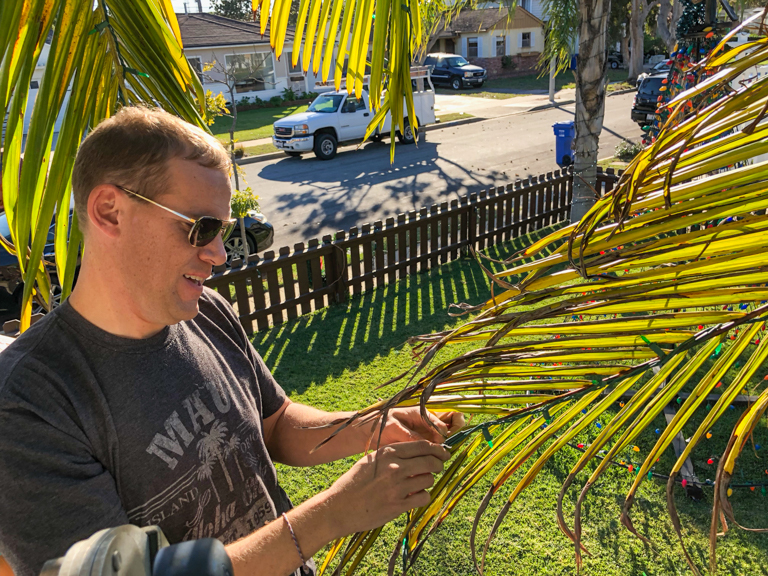 Every year I wonder if it's going to be the last one for reaching all the palm fronds. My ladder only goes so high. Jon is grabbing a selfie while I'm on the highest rung of the ladder and on my tiptoes on that rung, trying to reach the highest frond. 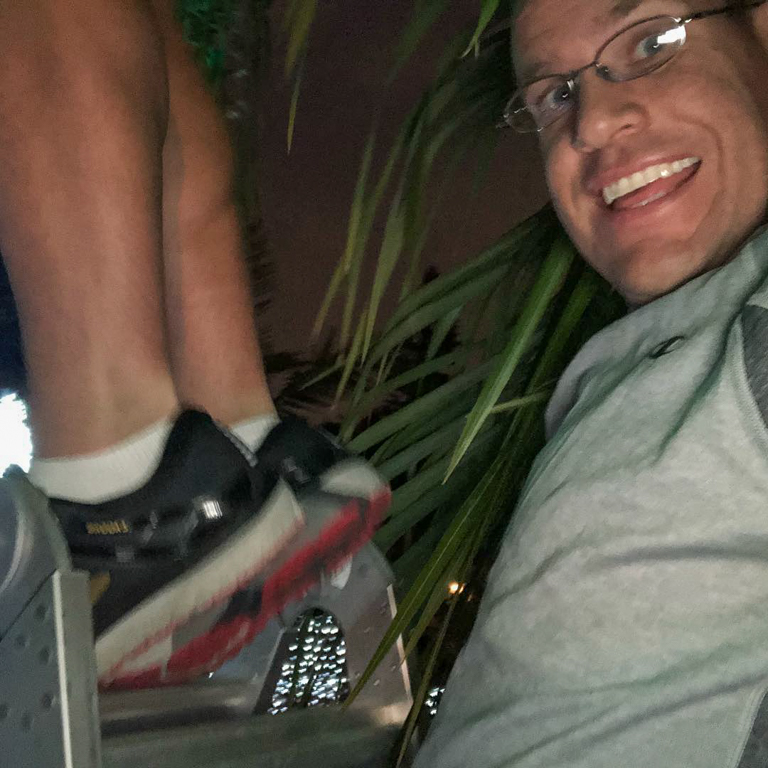 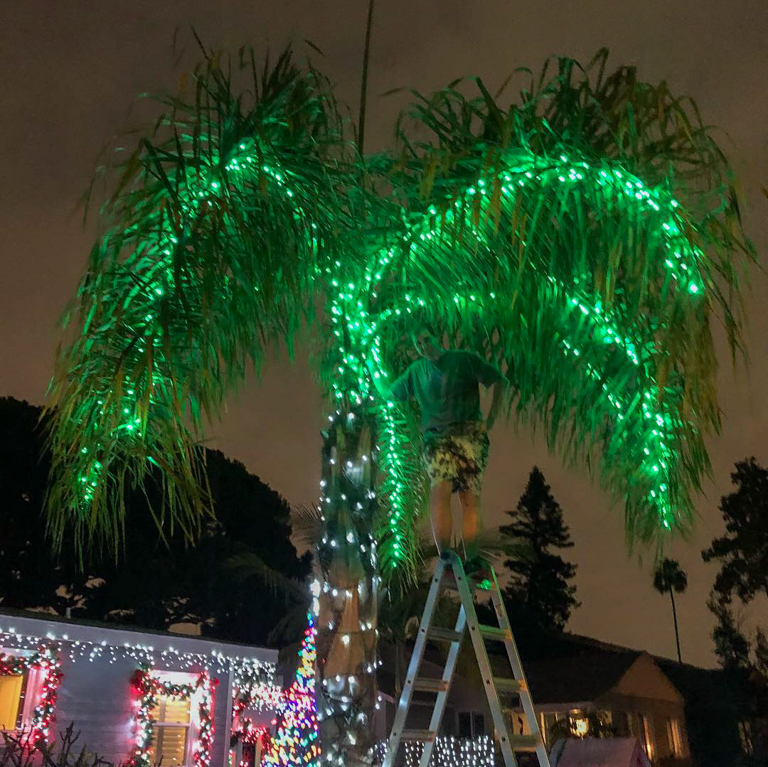 Last year I got the giant pine tree in our back yard strung with lights. That would continue again this year, but it was so much easier having help. A neighbor walking by snapped these photos of me and my brother getting those lights to the very top of the tree. I got permission from the neighbors to be on their roof to get the lights further around the tree. 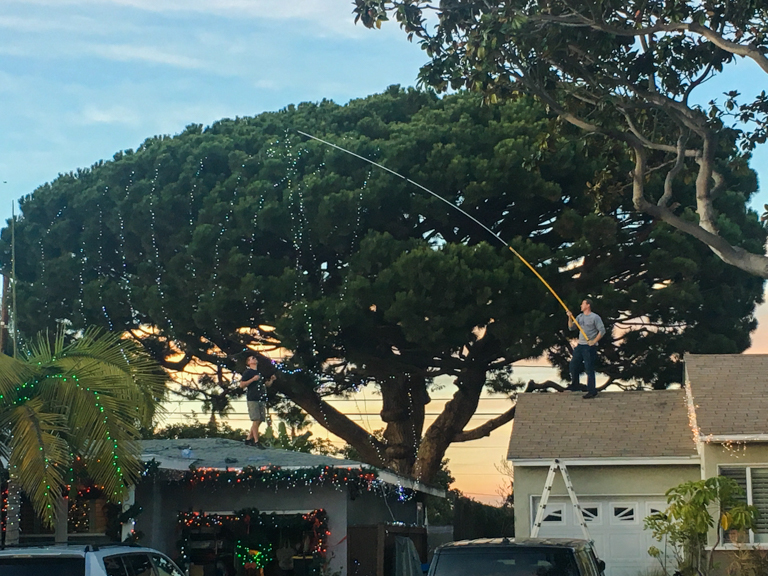 Using a 25' extension pole with a fork on the end, we were able to drape the lights over even the highest branches. 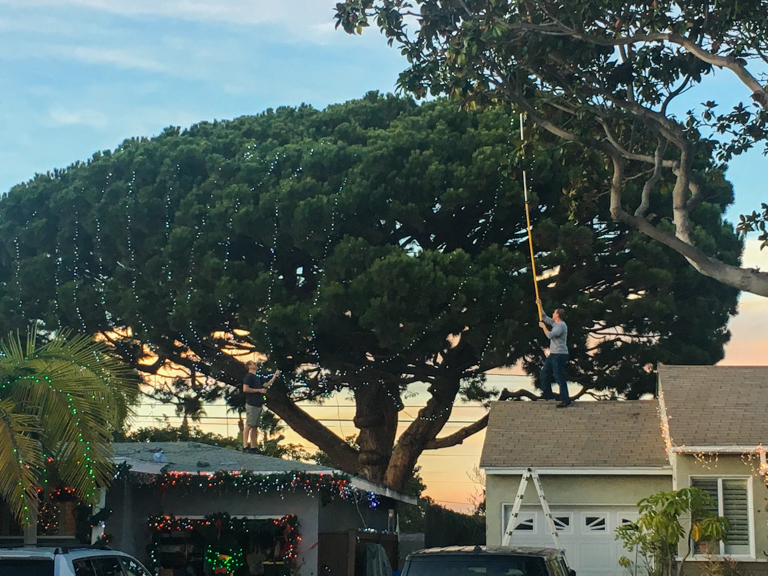 New this year, the kids' playhouse in the front yard got its own set of lights. Not only that, but if you look inside, there's a mini Christmas tree, complete with lights and as the kids called them, baby ornaments. 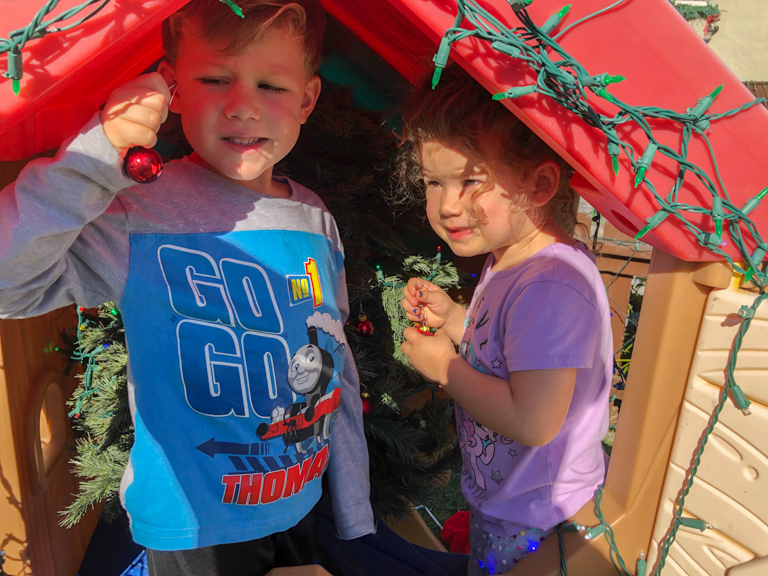 When it's all complete, the house glows. Looks pretty good if I do say so myself. And actually it's not just me saying it. There's a lot of cars that end up slowing down as they drive by, and if I happen to be outside, more than a few roll down their window and say how much they like them.

We've come a long way since the first few years of Christmas lights. In the beginning, it was just a single color. Now there's color all over the place. 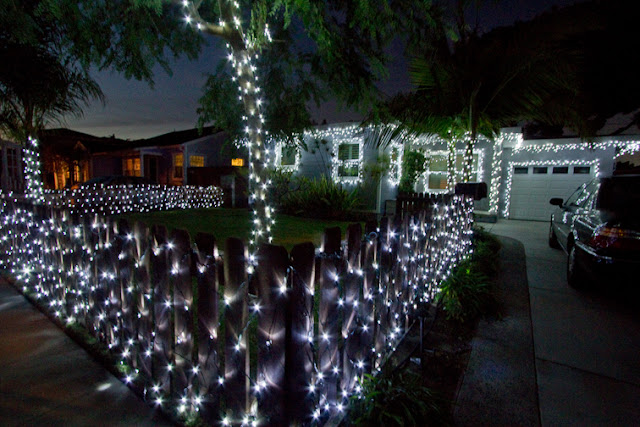 Smile for a family photo. This one is sure to go on the calendar.

Ian wanting to show off his playhouse. 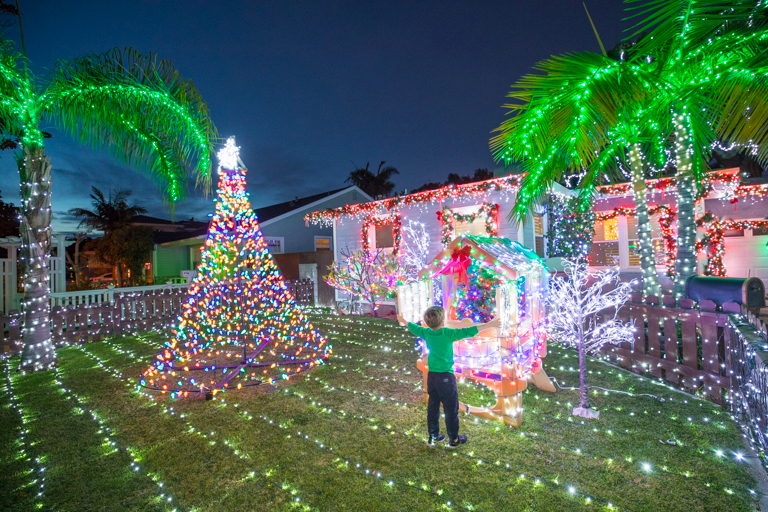 Inside is the little Christmas tree. 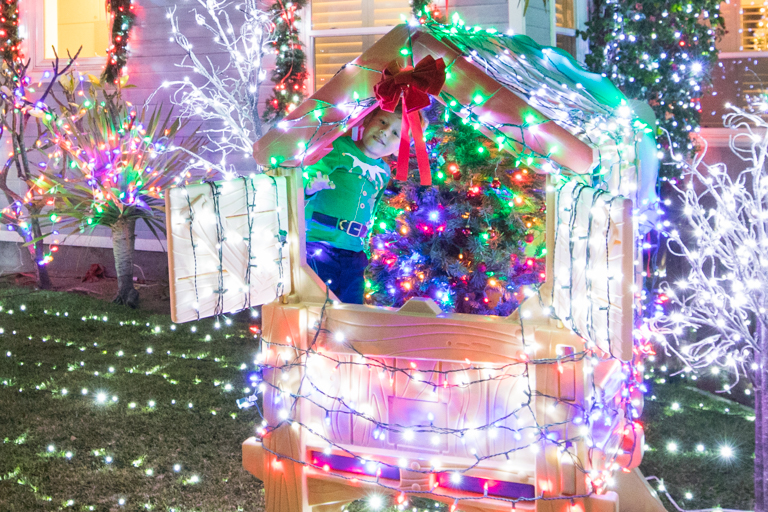 Complete with ornaments and multi-colored lights. 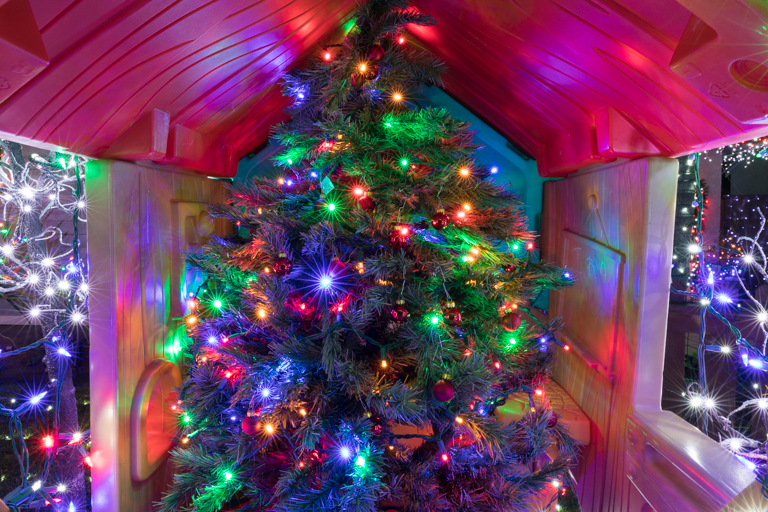 Dare I say that I might have put too many lights on their playhouse. It outshines everything in the yard.
Around their playhouse, I added a few lighted white trees, to make it more of a cabin style look. 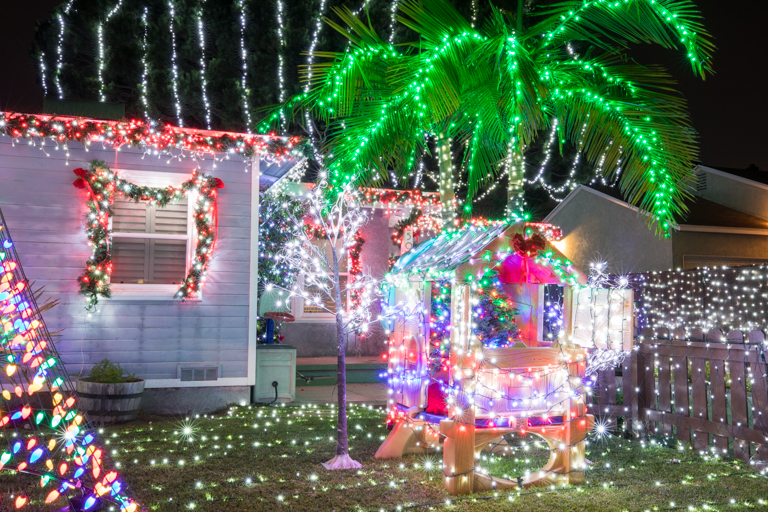 I just love how the green LEDs light those palm fronds up. And I like the green wreath hanging from the front fence. 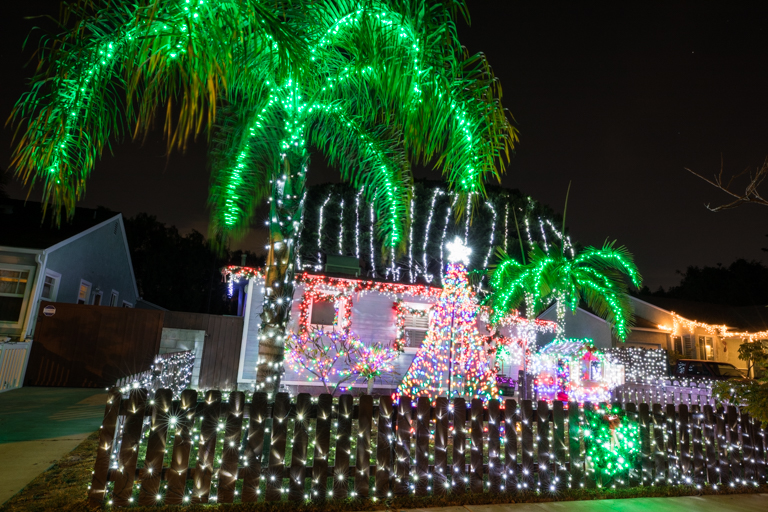 The LED tree is still the centerpiece of the yard. 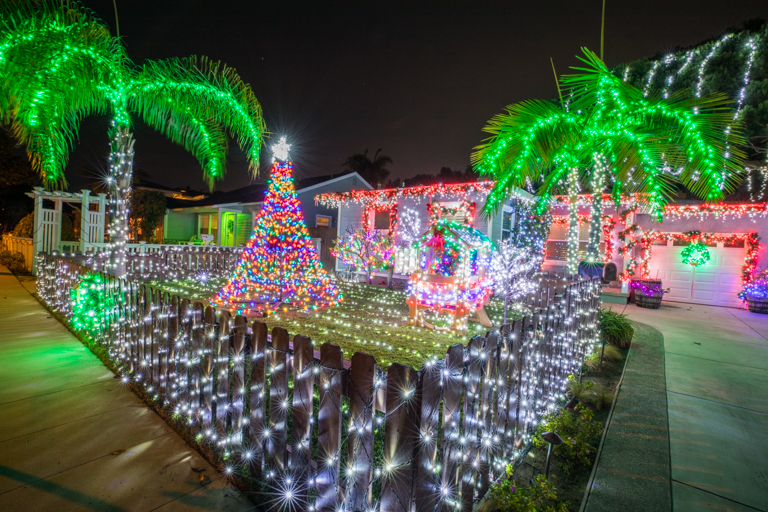 Also new this year are the red lights in the garland. Previously it was the same white lights as the icicles, and T thought they blended together too much. This year the red is a nice accent to the green garland and you can tell the icicles are separate. 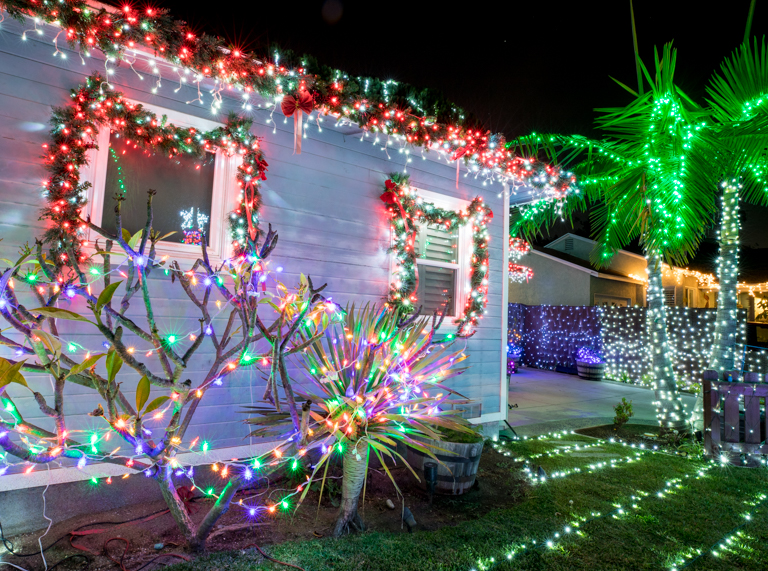 The garage and fruit trees get a little decorating too. Might have to see how we can beef this area up next year. 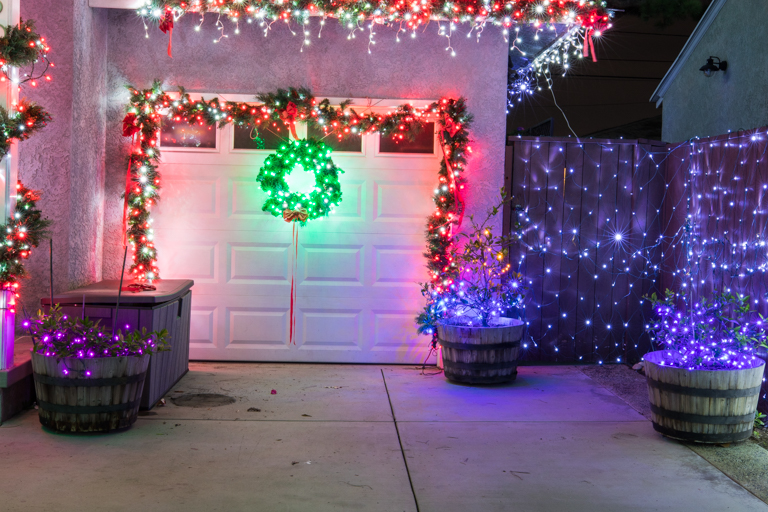 And finally a look at the giant tree in the backyard. We had a windstorm a few days ago which messed up my nice straight lines, but it's still an impressive sight to behold. 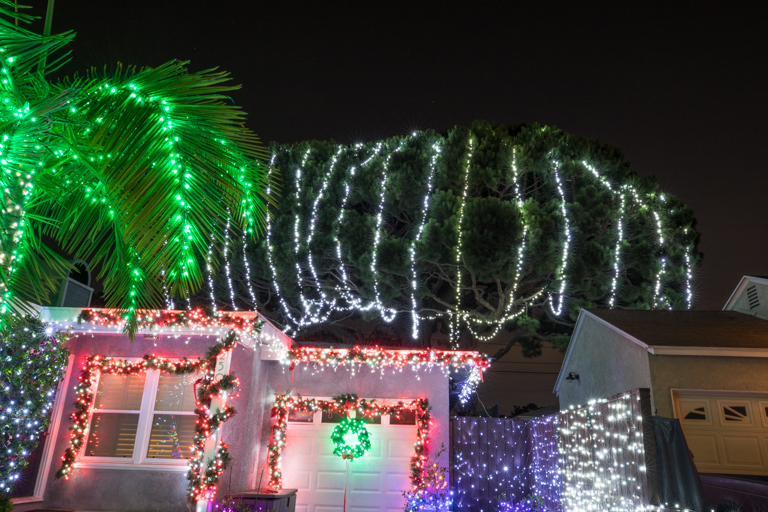 Those high winds were whipping the palm fronds too. Good thing they're secured with twist ties and wound between the individual leaf strands.

And there you go. This year's Christmas lights. I was very thankful for the help this year. As it gets bigger and bigger, it takes more time to finish. This year I was working on it here and there for 4-5 days, a couple hours each day.
It's never too early to start thinking about what I want to make different for next year. 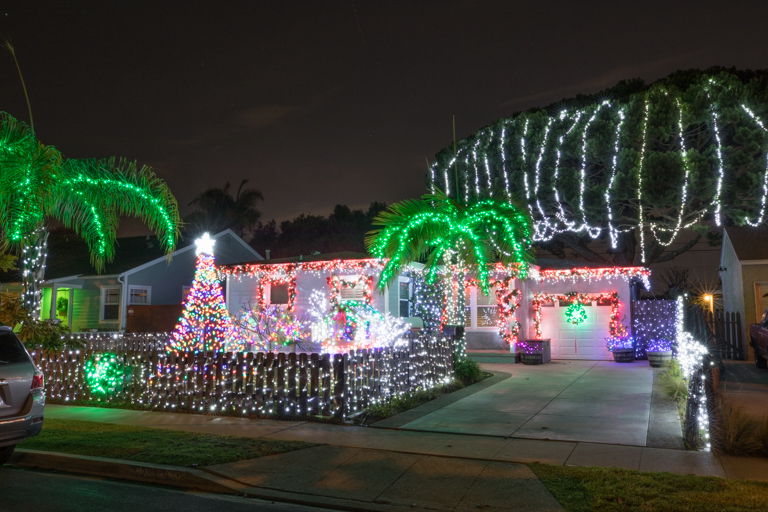