Just got back from Candlelight 2018. This will be a placeholder until I can get more photos processed and written up. This is year number 11 for us to attend Candlelight. 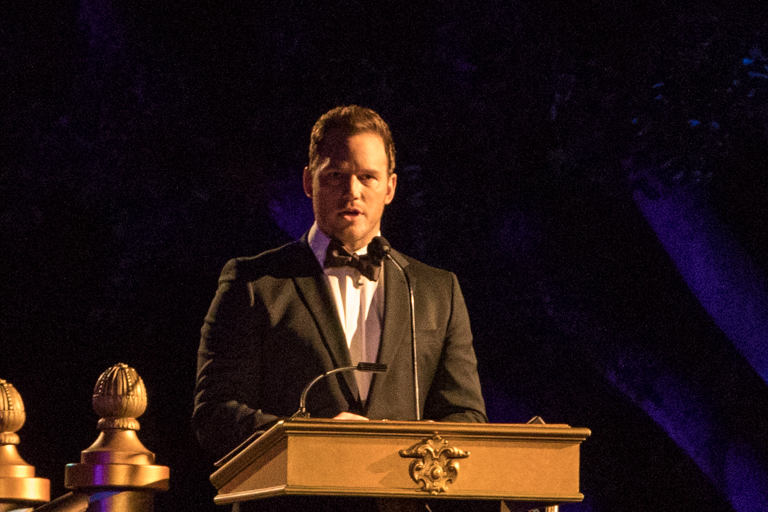 Today's going to be a long day. We got to the park shortly after it opened. First stop is right in front of the Candlelight stage while it's still accessible. 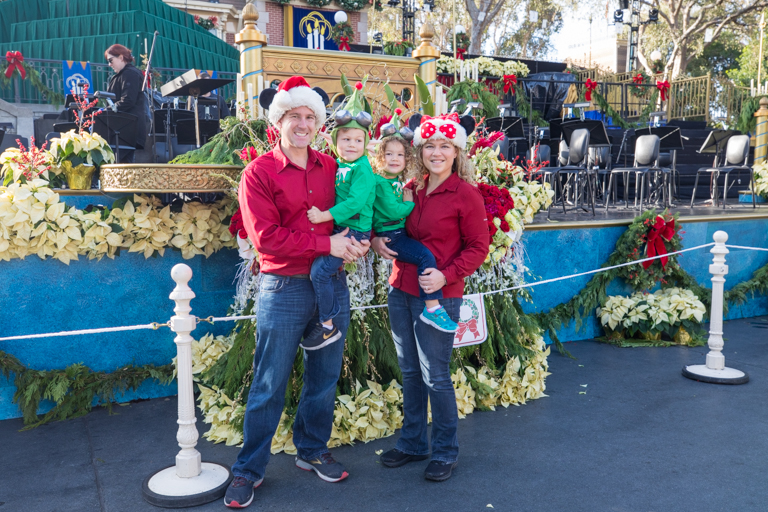 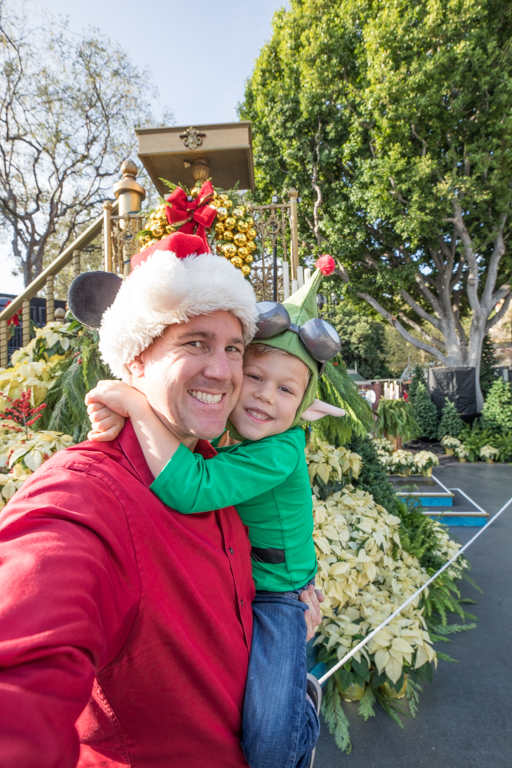 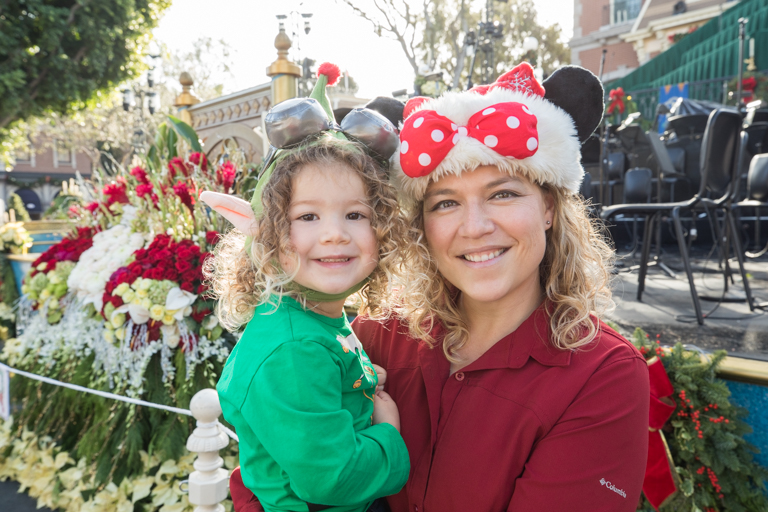 We did a few rides, but were back in the area before noon. This year, everyone was kept away from the curb and was told there was no sitting there until 1pm. At 12:35 they let everyone who was loitering by the Opera House walk over to the curb and sit down. 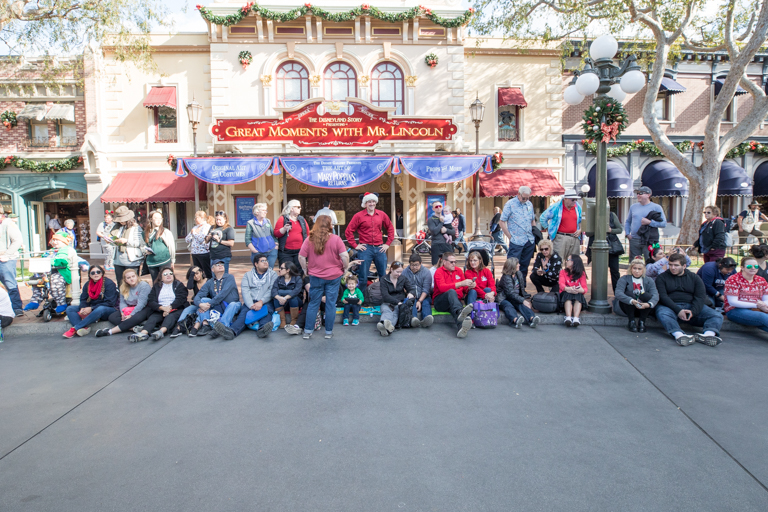 There were rumors about who would be the narrator this year, but Disney kept it tight under wraps. Around 4:30pm, it was time to do a mike check and everyone's question was answered. From where we were standing it was a little hard to tell, but I took a photo, zoomed in, and... Hey! It's Chris Pratt!
The mike check consisted of "Hello Disneyland" and that was it. Less than a minute later he was back off-stage. 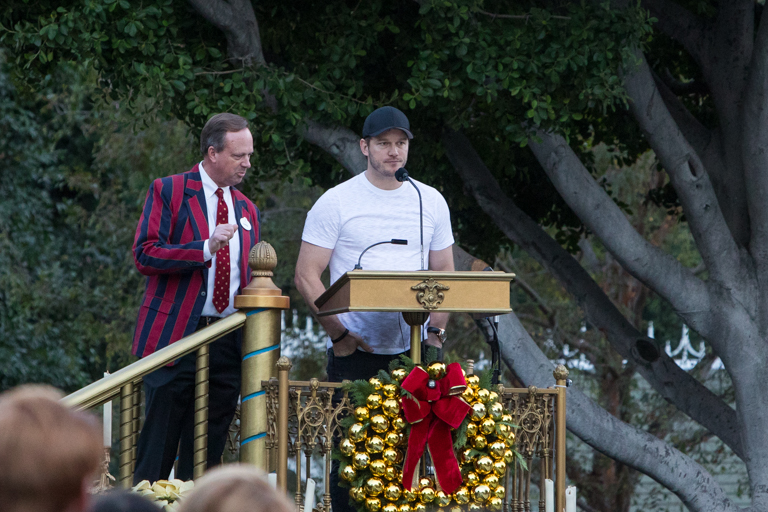 At 5:25pm, Nancy Sulahian took the stage and started it all off. 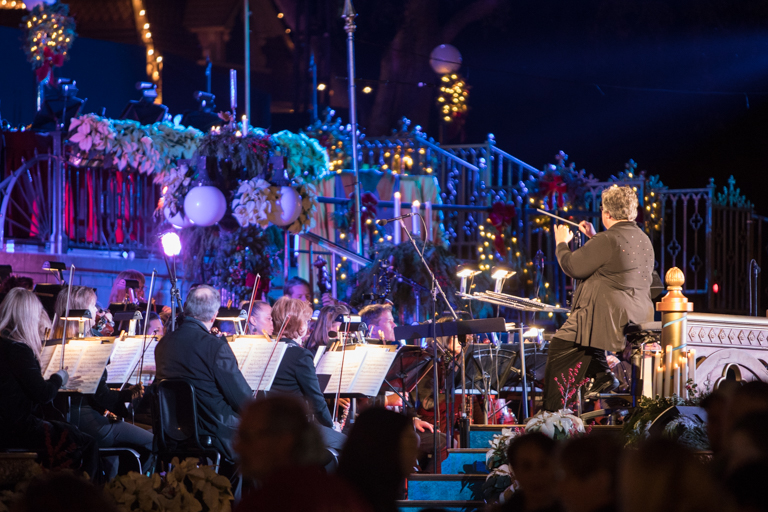 The Processional made their way down Main Street. 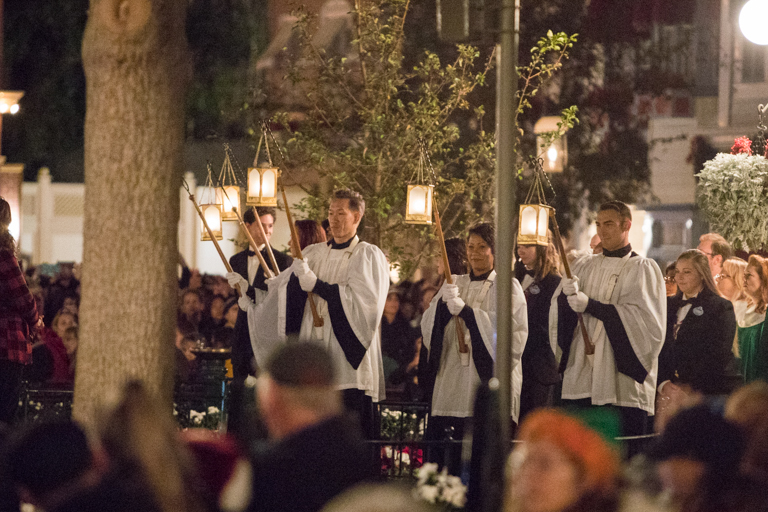 We couldn't see Ruston from where we were this year. But I do recognize a friend. 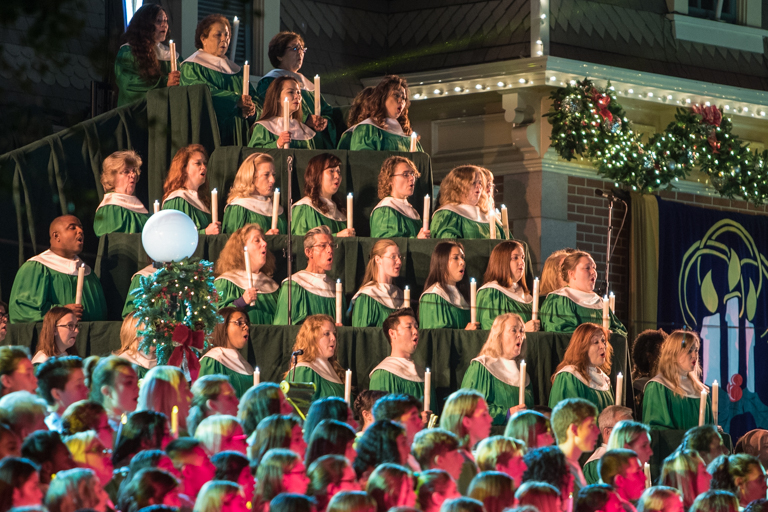 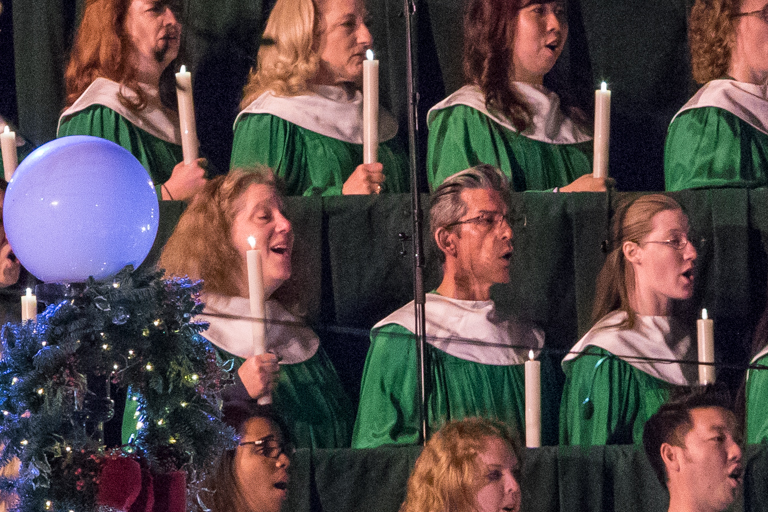 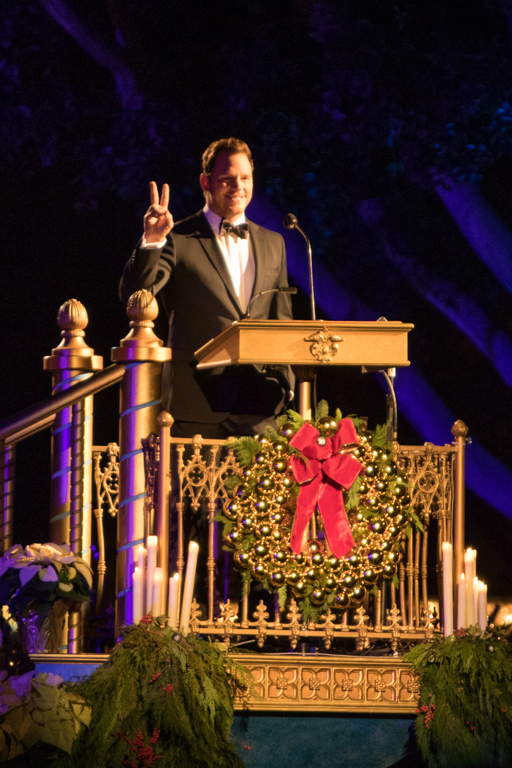 It was certainly a different show than we've seen before. Chris Pratt apparently likes to go off-script. For instance he started with the following.

"Hello Hello!
"About 2000 years ago, God, sends an angel named Gabriel to a city in Galilee named Nazareth to a virgin, who was betrothed to a man named Joseph, of the house of David, who was a descendant of King David. And that virgin's name was Mary.
"And having come in, the angel said to her, Rejoice fine favored one, the Lord is with you. Blessed are you among women.
"And the Bible says, when she saw him she was troubled at his saying, and considered what manor of greeting this was.

"That seems confusing to me so I'll just paraphrase.
"SHE WAS KINDA SCARED BECAUSE AN ANGEL JUST FELL OUT FROM THE CEILING!"

"But that angel said to her, Mary do not be afraid, you have found favor with God. And behold, you will consume... consume... heh, nope. Behold you will conceive in your womb and bring forth a son. And you shall call this son Jesus."

I don't think he meant to do that last one.
I have the audio, just no video. Yes that is Ian asking "Where's Uncle Ruston" 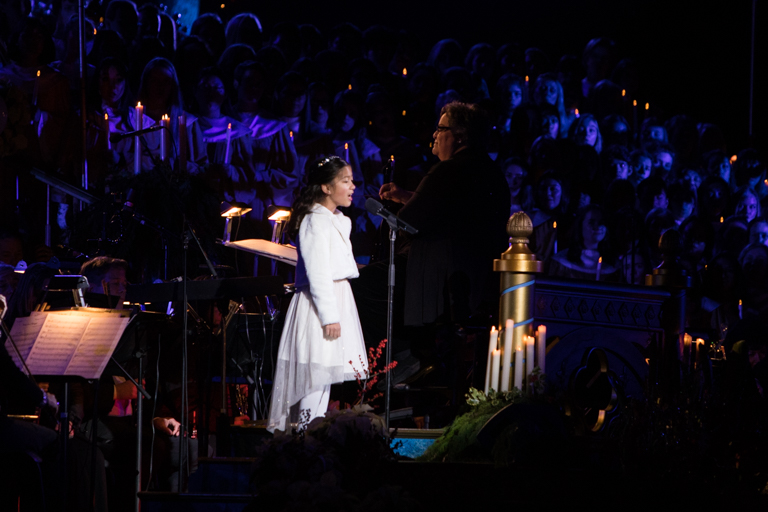 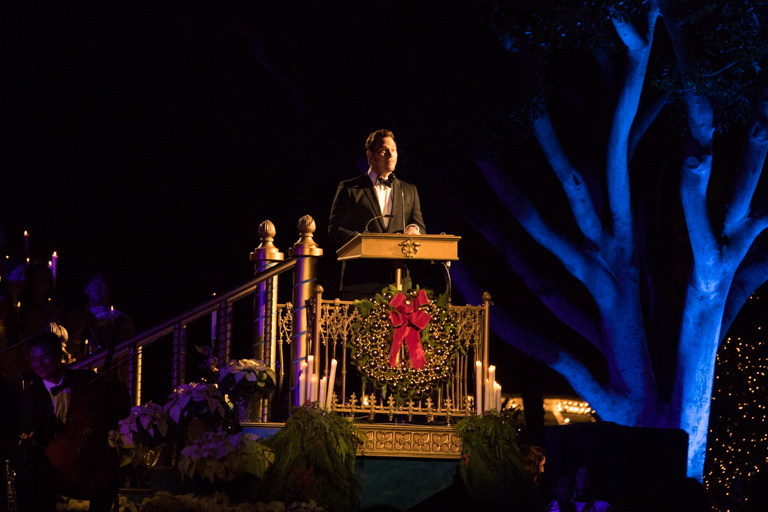 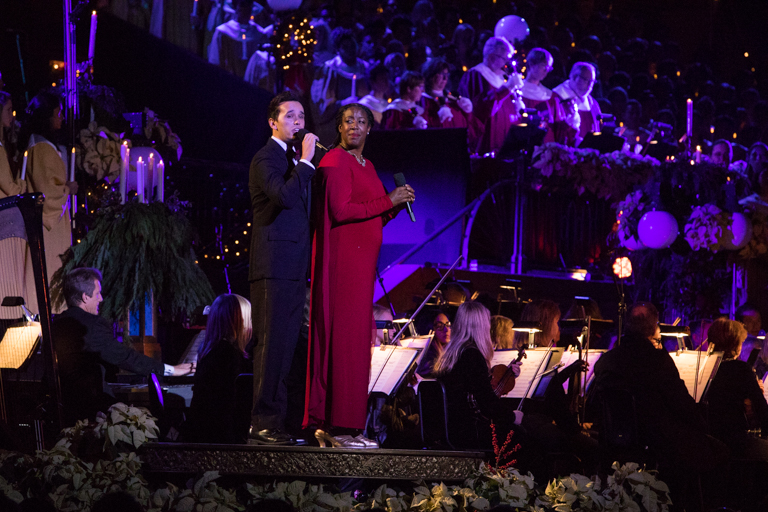 At the end, Chris said a few words,

"Thank you so much ladies and gentlemen it was really my honor to share this beautiful candlelight ceremony with all of you. It's been a very special and inspiring night.
For me, being a parent has changed my life in so many ways. And one of those ways is to understand, truly, the love that a father can have for a child. And when I stare at this precious little creation of mine here, and I watch the ways in which he tries to please me, I just feel the love that is so pure, and unending.
And the way we love our children. and the more we love our children, the more we will understand the capacity for our Father in heaven to love us (lots of applause). Each and every one of us, is his creation, and he just marvels in the ways in which we can try to please him. And that should give us all a great deal of comfort, I know it does for me.
This holiday season, let us embrace every one of our tomorrows with hope and love, and through this holiday spirit, may we continue to spread peace and goodwill throughout the world.

"Thank you and MERRY CHRISTMAS" 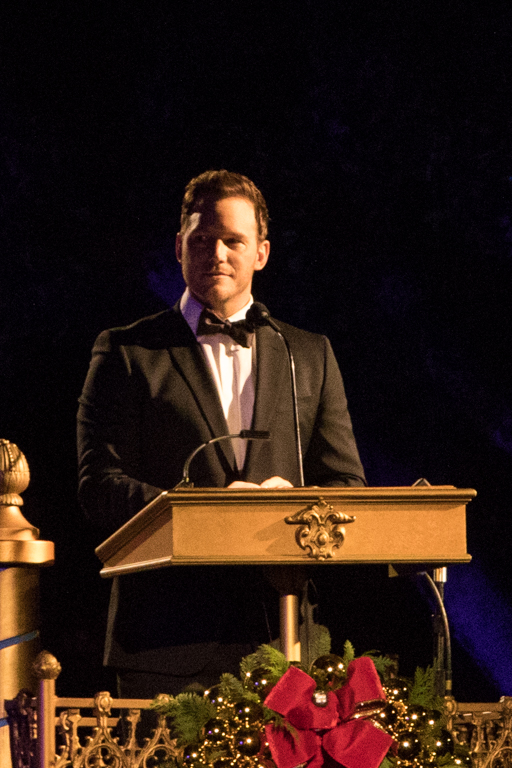 Great!
Afterwards, Theresa stayed with the stroller while I made my way towards the stage with the kids. Nancy Sulahian was conducting the orchestra in their last piece. We stood by the stage and then thanked her as she was walking off. She was a good 3 feet above us on the stage and said "let me just come down to see you." Even though she's got another show to lead in an hour, she came down and spent time with us. As soon as she got to our level, the kids both went up to her and gave her a big hug.
She asked the kids' names, asked if they liked music, and even let Alli hold her baton. After Alli gave it back, she made sure to give it to Ian and then said it was going to be extra special now that they'd rubbed it. Then she led them over to the nearby chairs and suggested I take a picture of them. I thanked her for all the work she does to put this show on every year. We said our goodbyes and wished her good luck the rest of the shows. I couldn't have asked for any more. Really awesome. 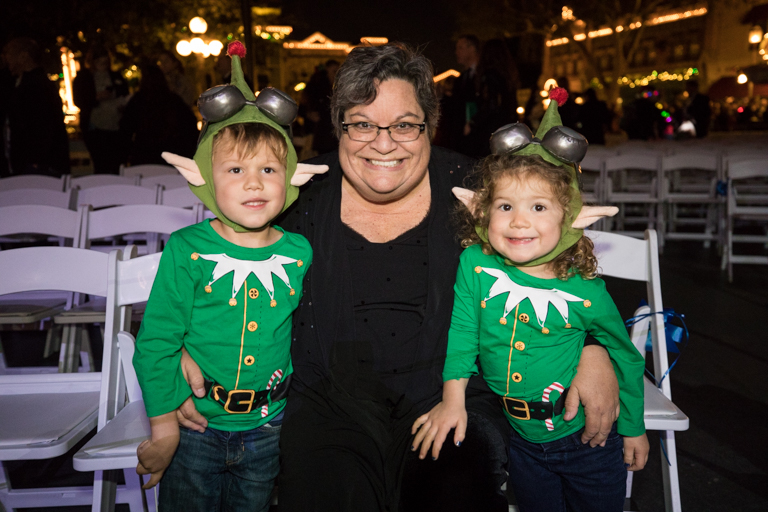 Afterwards, I got a photo with the kids in front of the nighttime stage. 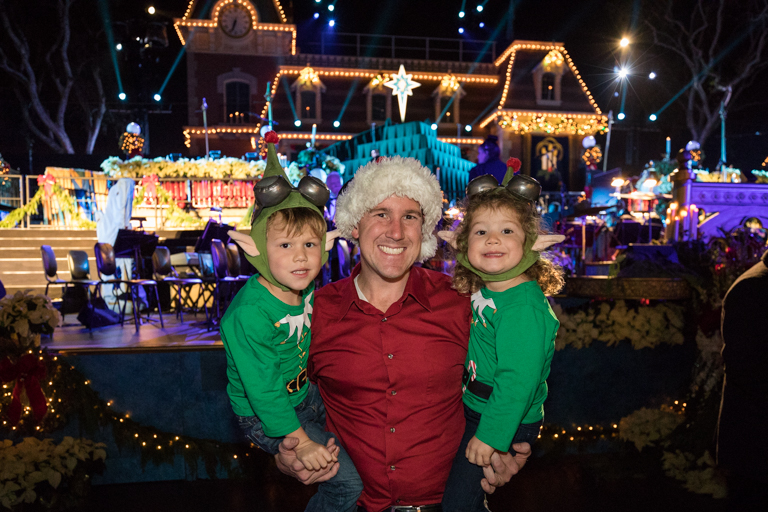 He asked if I'd like one with the tree in the background as well. Sure! I'll never turn down a picture.
Oh, and who is that in the very right side of the frame. Tony Baxter, signing an autograph for someone. 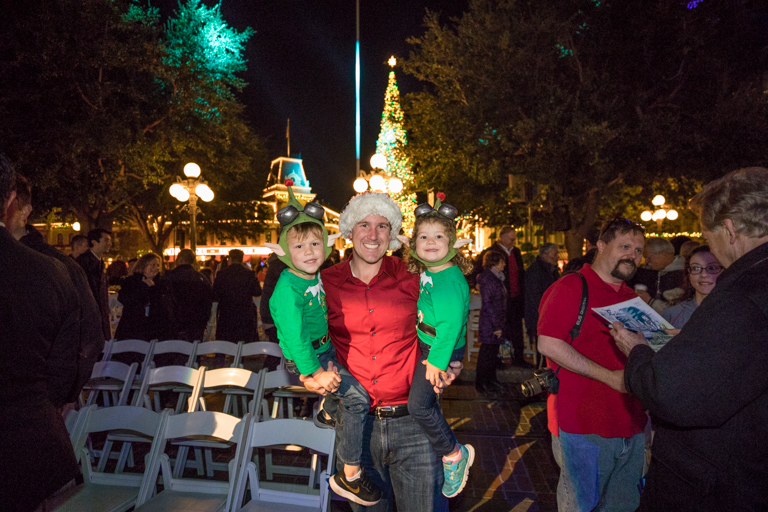 Afterwards we joined Theresa and waited for our real star of the show.
It's Ruston! Nice work Ruston! 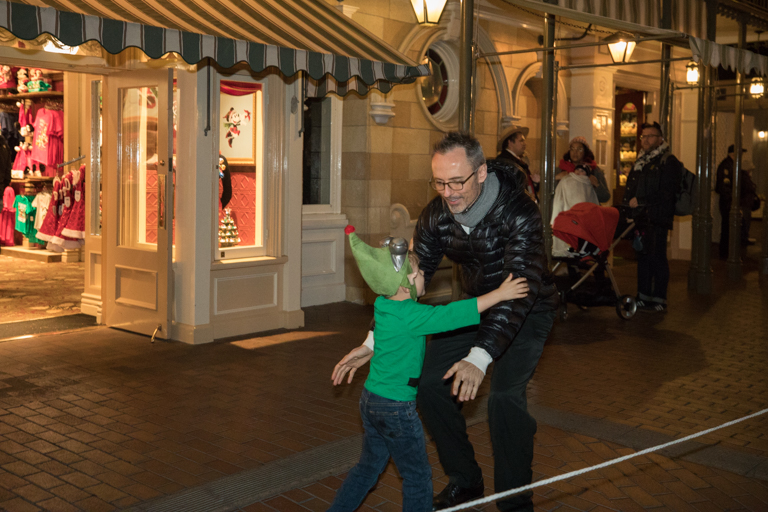 It's tradition to get a photo together in front of the tree. 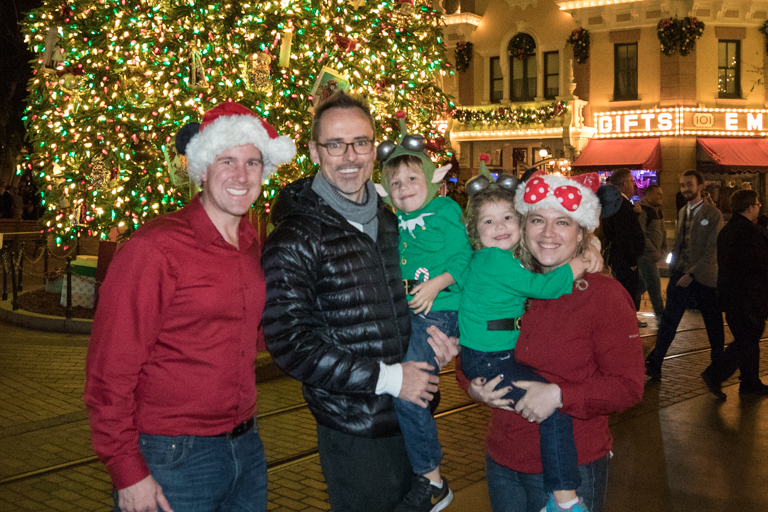 It's also tradition to go sit down and drink spiced tea and snack afterwards, so we all headed to the castle to watch the lights and enjoy our warm drinks. 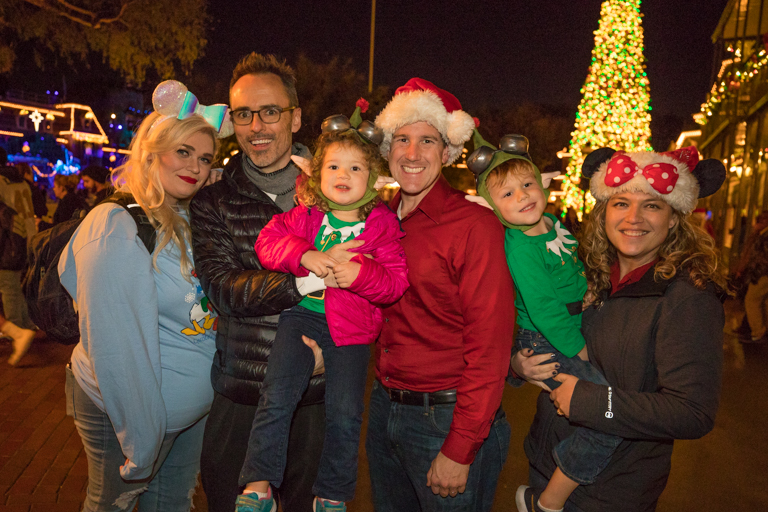 Time to head home. On the walk through downtown Disney to the car, this happened. Too cute. 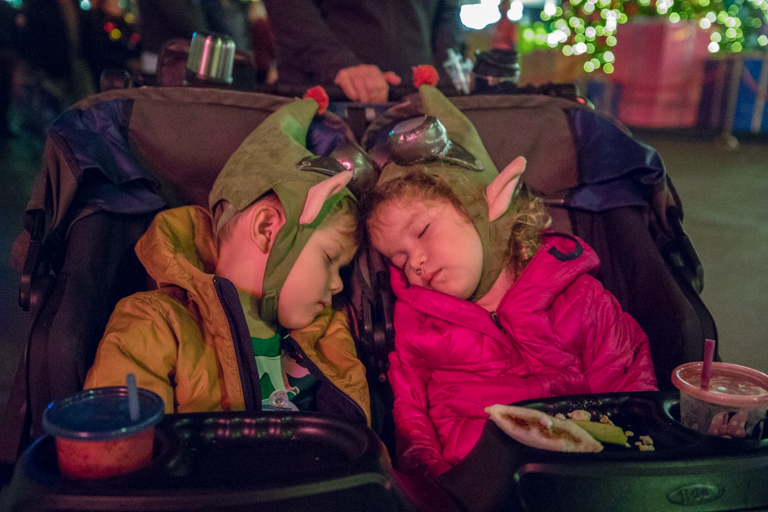