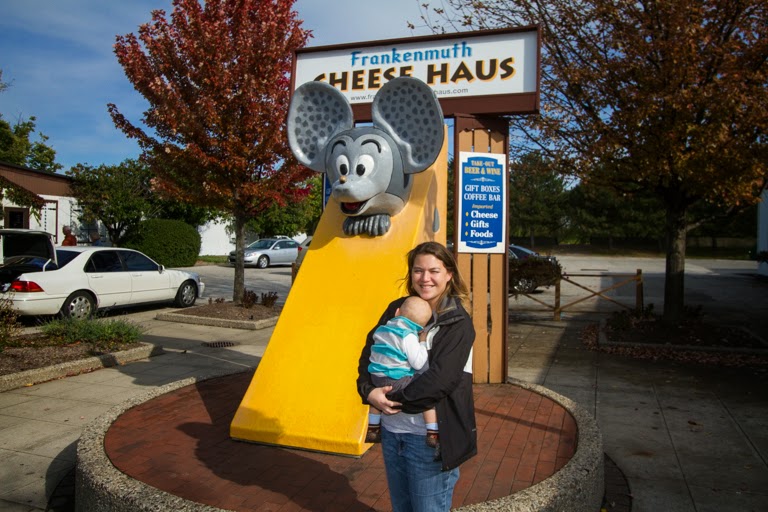 Located here since 1968, the Cheese Haus has been selling cheese and giving out samples for years. 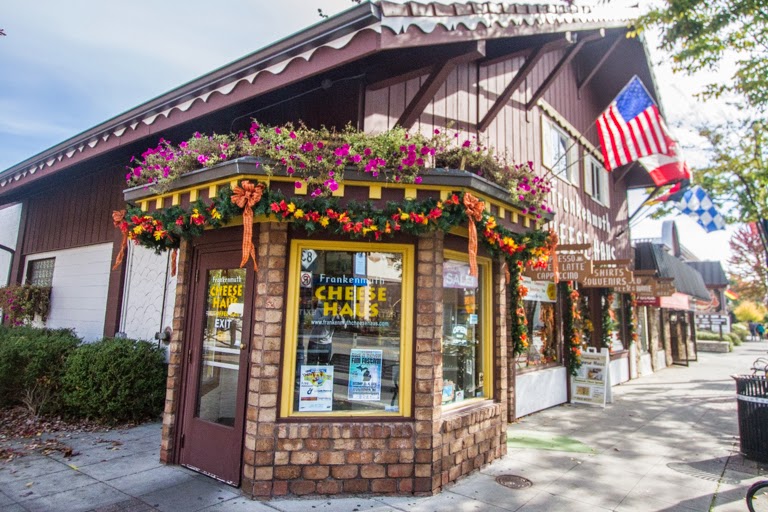 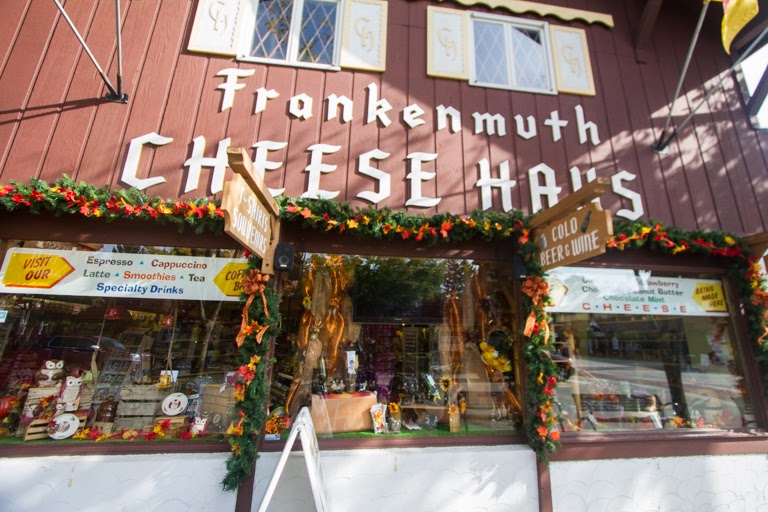 When you walk in, you see a center counter surrounded by a ridiculous number of cheese types. 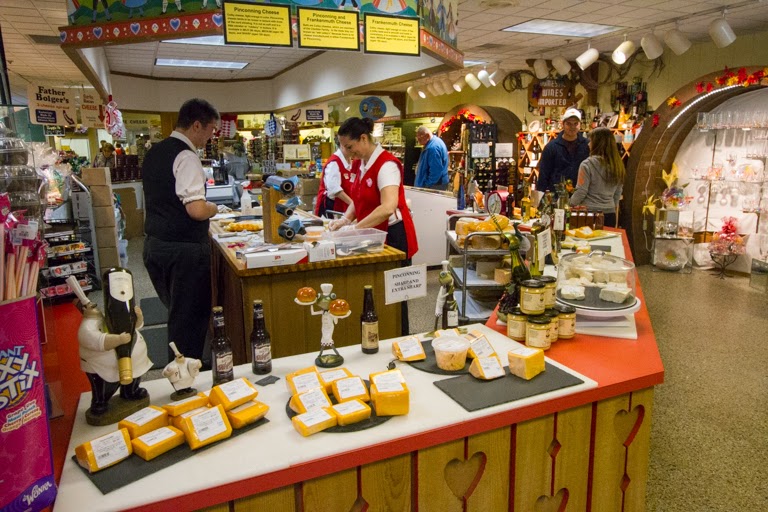 We paused for a little while around this display of cheddars. They ranged from 2 years old to 17 years old! 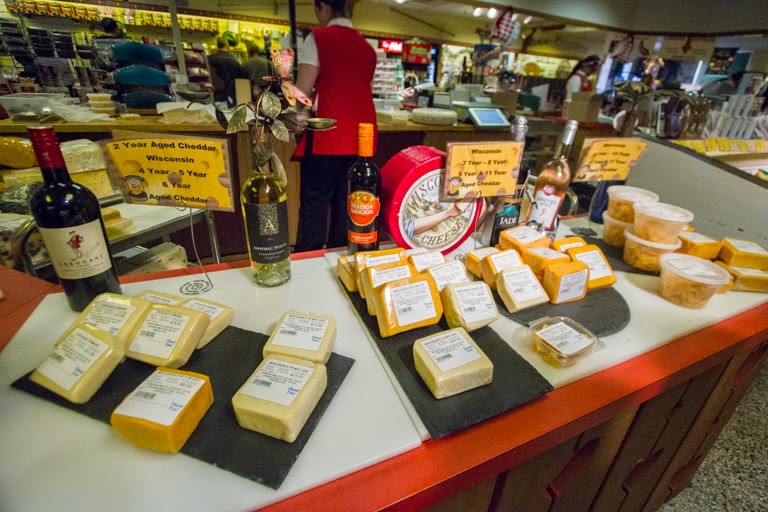 While we were lingering we were asked if we were looking for anything in particular. When we expressed an interest in trying a range of the aged cheddar, she started telling us about her favorites and started cutting samples.
Donald asked what the difference was between this cheese and the sharp cheese you might buy at a store. She told us that the sharp cheddars in the grocery store were aged 200-300 days, while these started at 2 years. For these, the initial cheese wheels are put into cave-like conditions where they age and the outer edges of the wheel start to mold over. Every few years, they trim off this outer layer and discard it. For the cheeses that are in the 15-17 years old range, the cheese wheel is a quarter of its original size, having discarded three quarters of it in the aging process. No wonder it's so expensive! 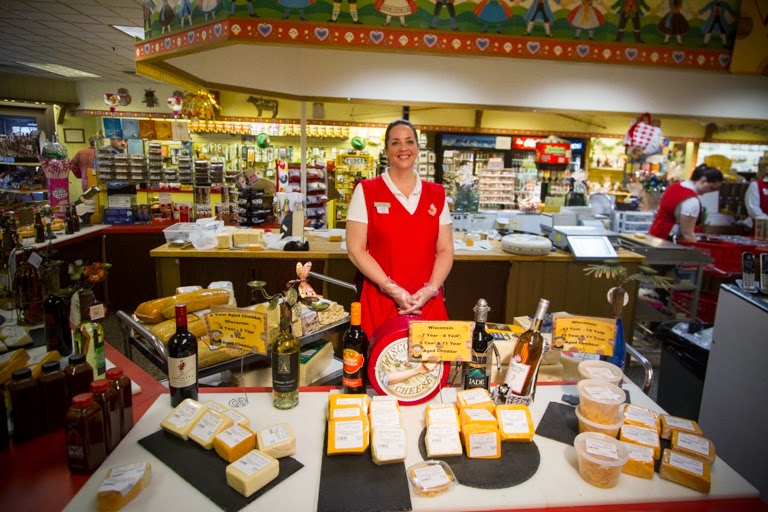 We were started on a middle of the pack 9 year old cheese. It was sharp and tasty and Ian was really interested in it. When she saw he was wanting to try something she grabbed him some Tiger cheese, a mild Colby and Muenster mix, and cut a few cubes. He grabbed a piece off her hand and shoved it in his mouth. He must have liked it because while T wasn't looking, he reached over and grabbed the biggest chunk from the sample lady's hand and shoved that in his mouth too. 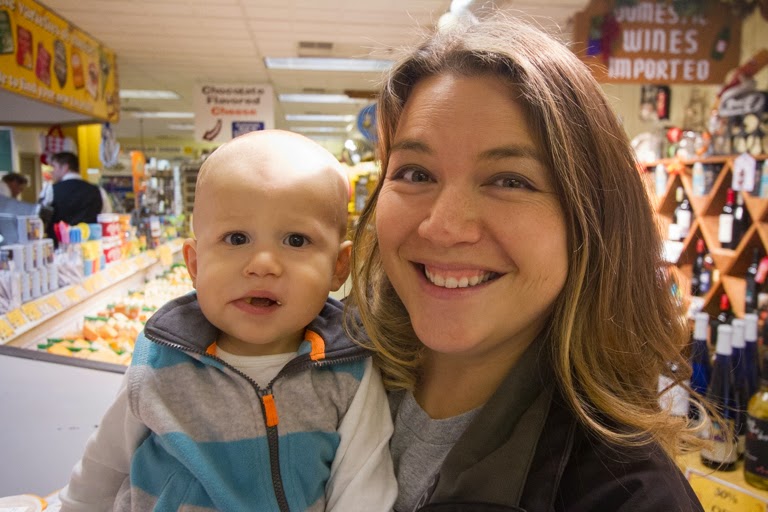 The three of us sampled cheeses of so many different ages, we really got to appreciate the differences between them. When we sampled the 11 year old cheese, Ian happened to be without anything in his mouth, so we figured sure, why not try out a cheese that's 10 years older than you! After a brief surprised look on his face, he reached for more. This boy likes cheese.
In the end, we had so many delicious cheeses, we had to bring some back to the rest of the family that couldn't make the trip up here. 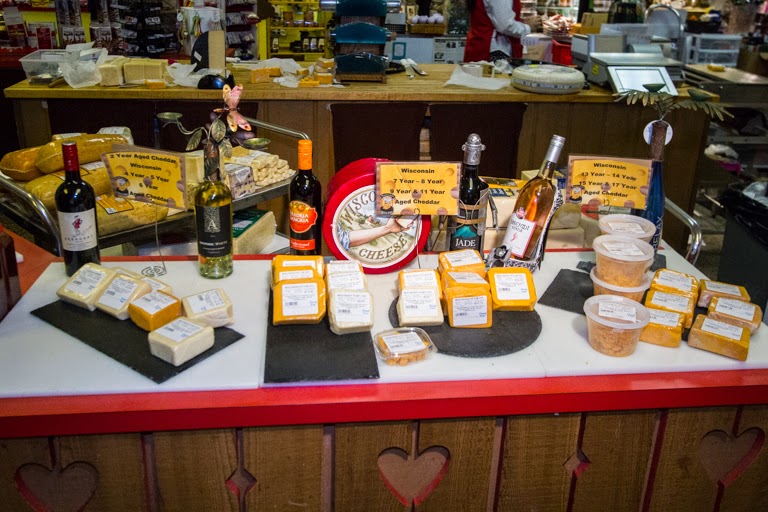 One of the items they're known for at the Cheese Haus are their chocolate cheeses. There were three different types chocolate cheese available: regular chocolate, chocolate mint, and chocolate peanut butter. All three were out and available to sample, and you can bet I tried them all. The taste was definitely chocolatey; while the texture was a soft cheese. Honestly it reminded me of fudge more than anything else. I love all the samples available here, including the Jalapeno, Horseradish and Bacon cheese spreads. 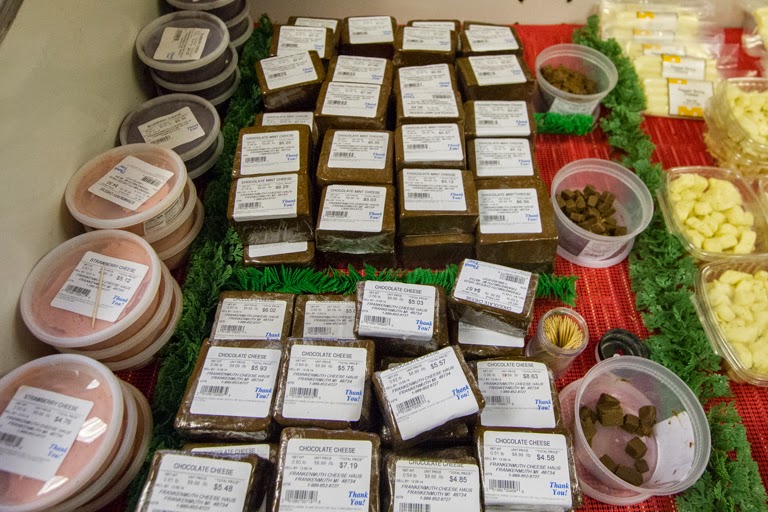 In the end, we bought over $60 worth of cheese. That 17 year old cheddar cost a whopping $55 per pound, but boy was it good. All you needed was a little nibble and your mouth exploded with flavor. 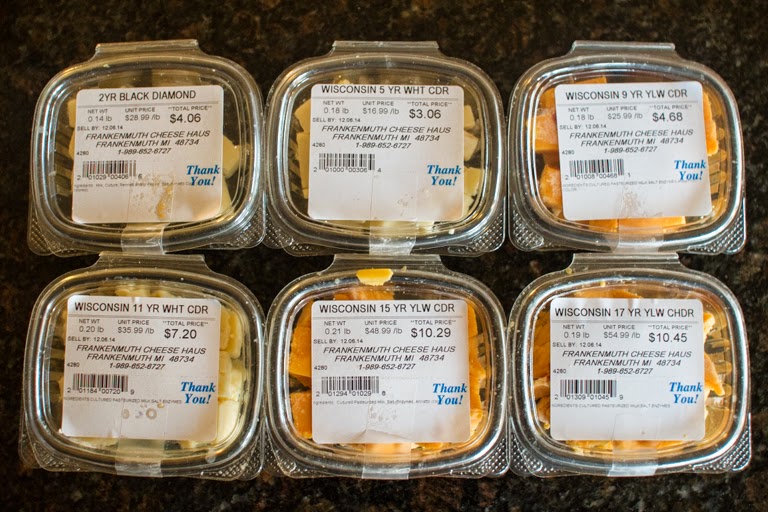 There were some great cheeses and we're now going to look for a local cheese shop back home where we can find more things like this. 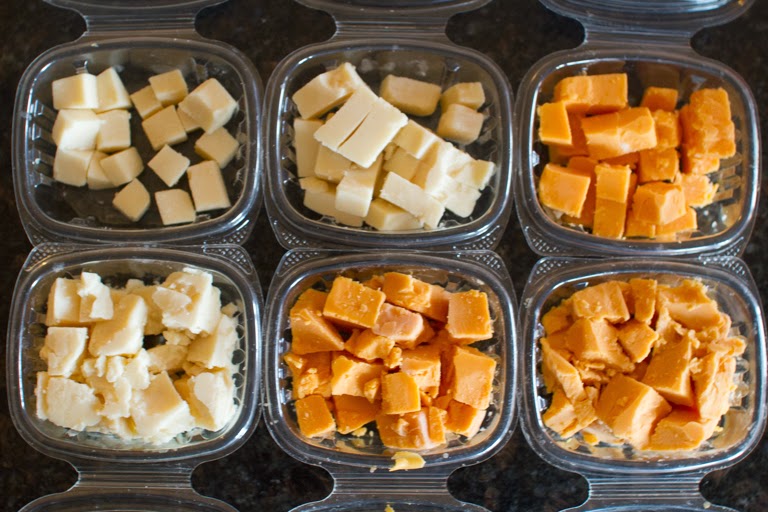 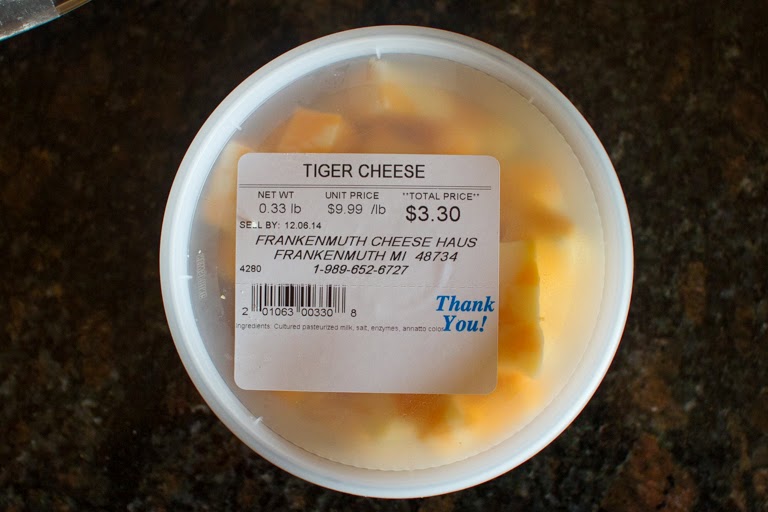 Still enjoying it after we got home? 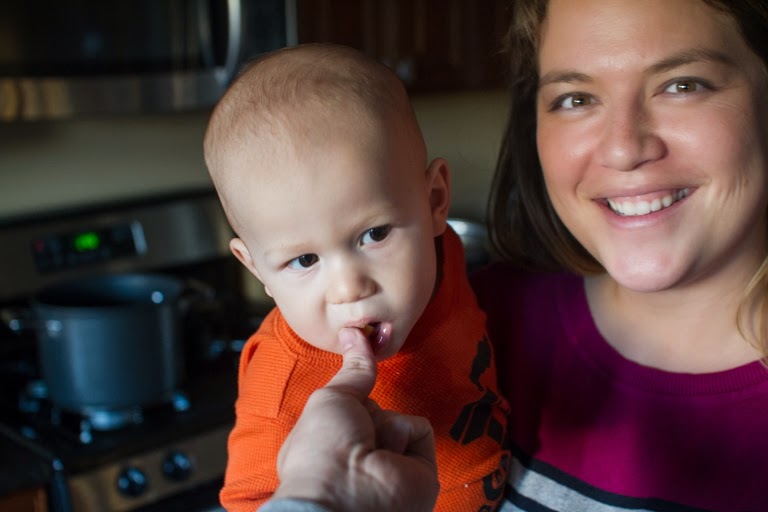 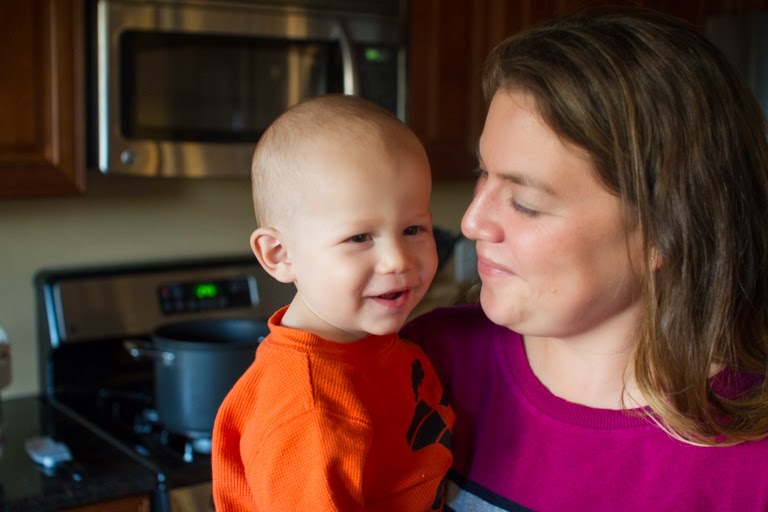 If you're in the neighborhood, you've got to stop by the Frankenmuth Cheese Haus!
Posted by Joe at 10:00 PM