A little late in posting this, but Happy Halloween! Argh, we be pirates this morning. And since it's Friday, yes, I wore this to work as well. 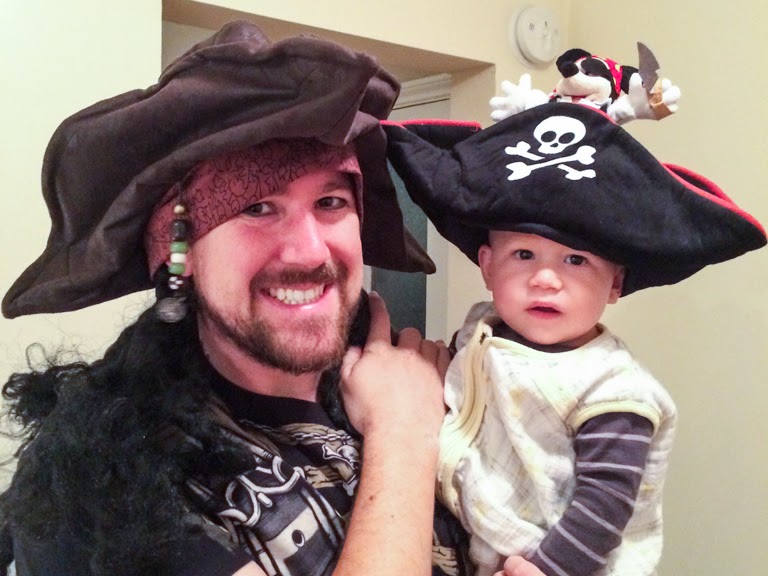 After work, it was time to take Ian Trick-or-Treating his first time ever! First stop? 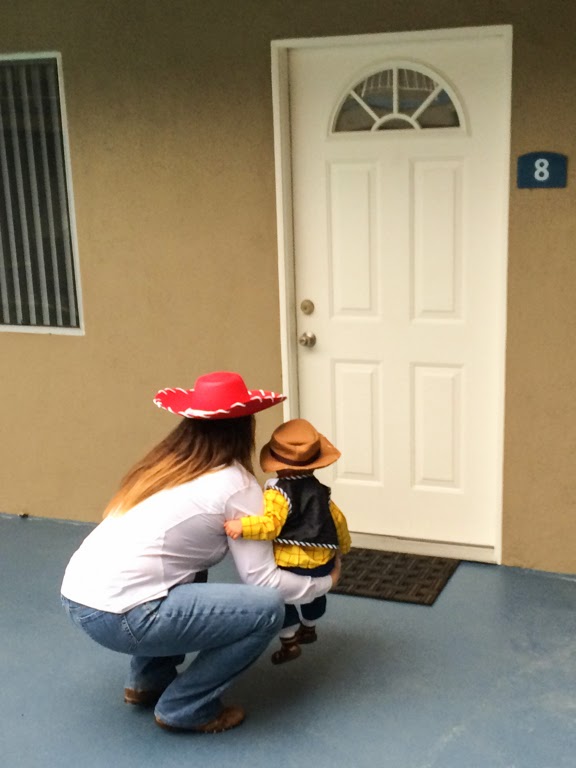 Of course it's Grammy and Grandpa's house.

He had fun with it. I think Grammy told on herself a little bit though. When they watch Ian, we've asked that they don't give him candy, because he's not even a year old. After Ian got M&Ms in his pumpkin pail, we said he could have one and Grammy said, "He really likes those!" How would she know that?!? 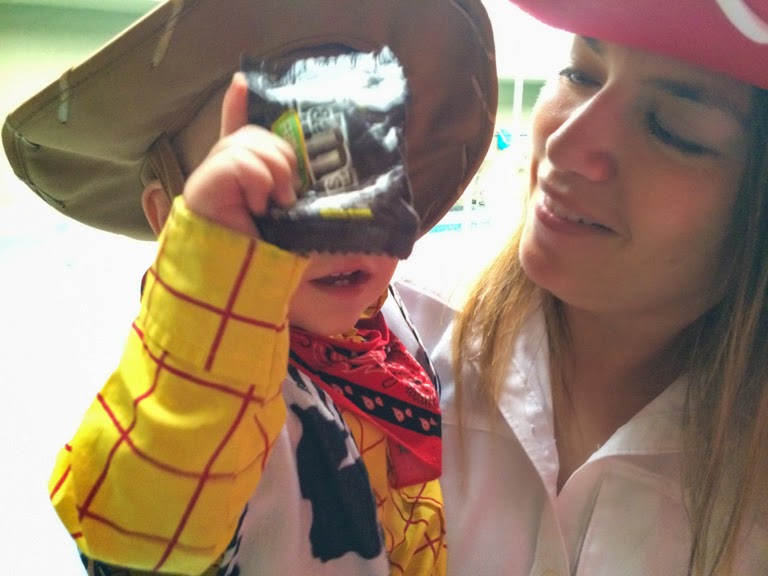 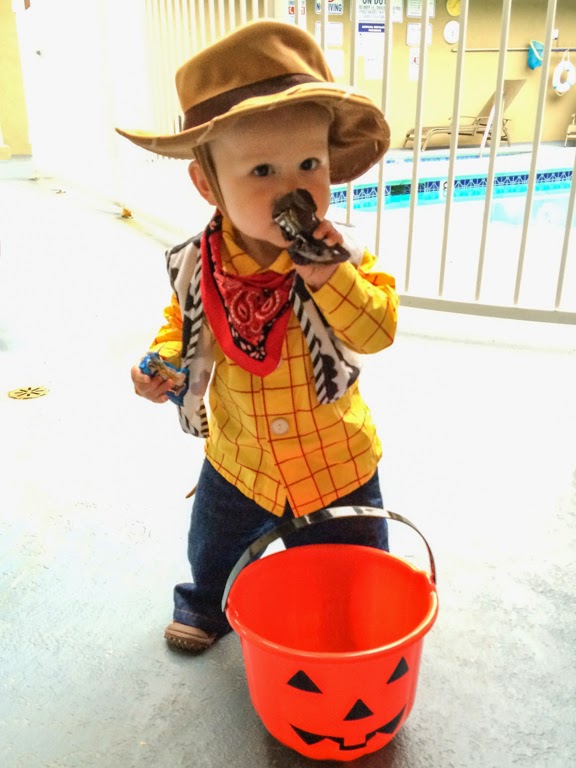 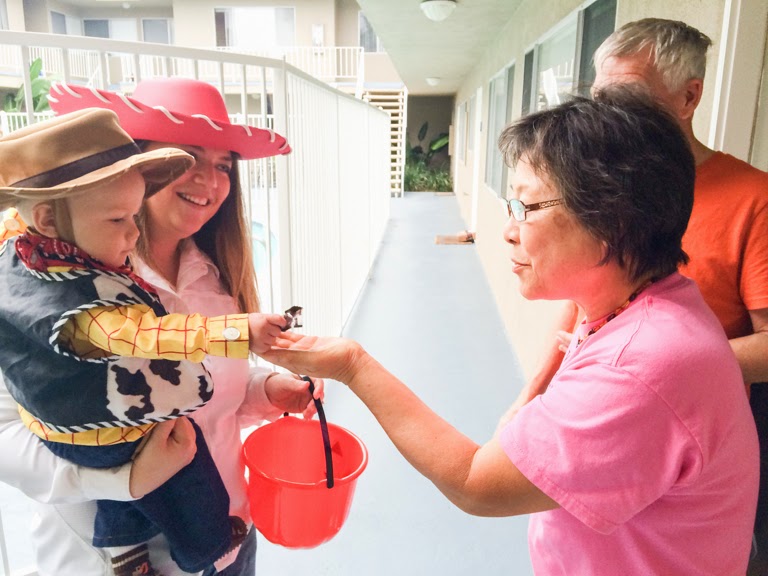 Our next stop was our neighbors Gene and Grace's house. 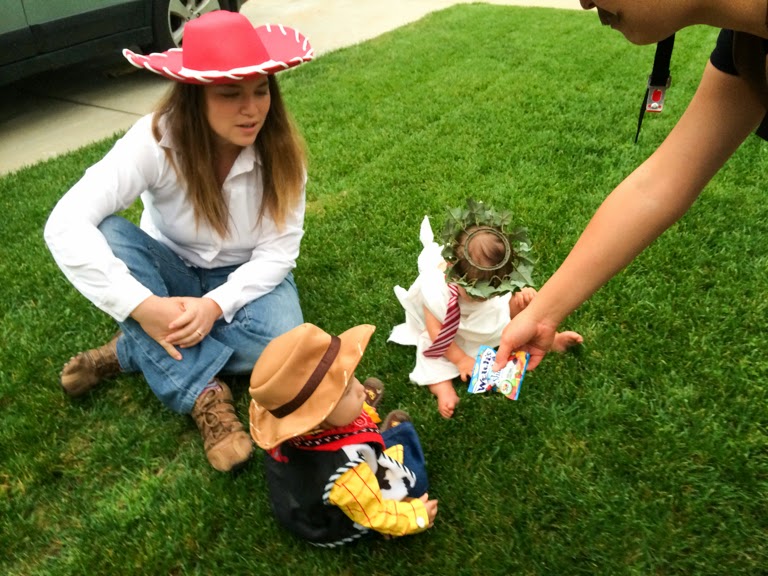 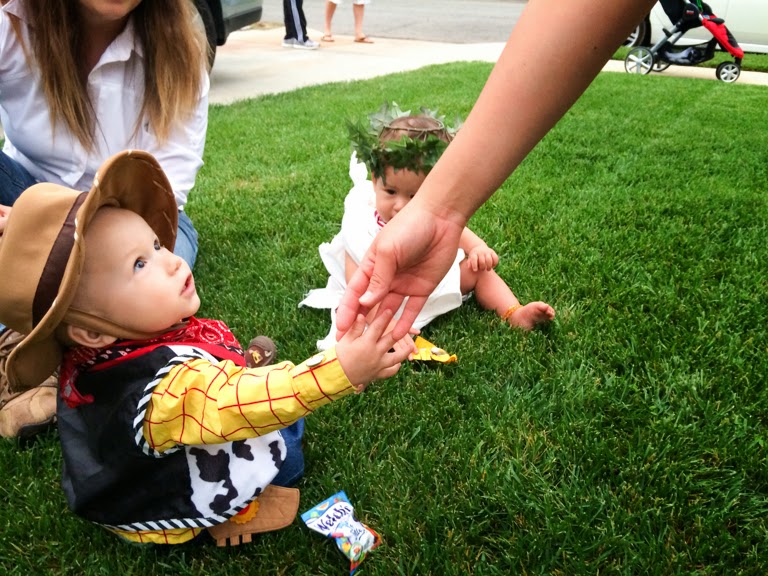 They were dressed as characters from Animal House with Elliott dressed as Bluto. 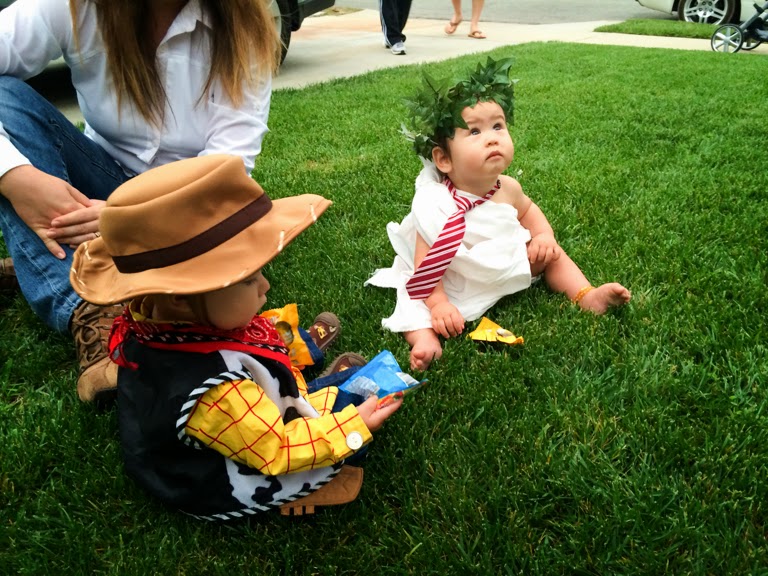 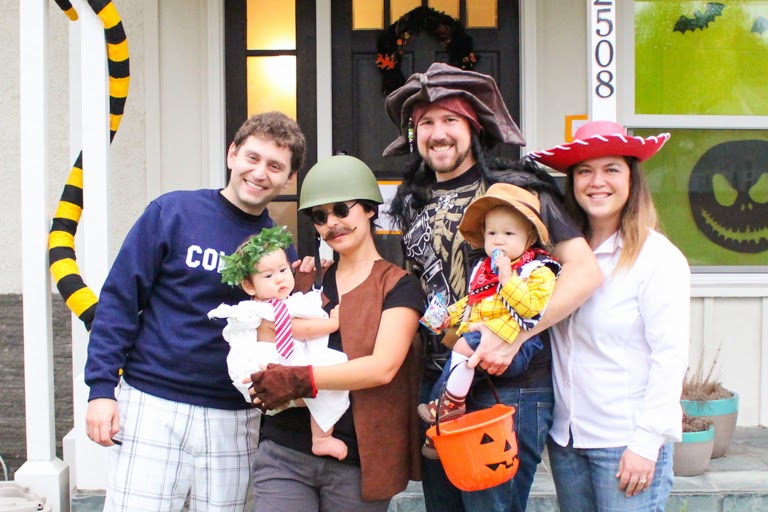 So after just a couple stops, the three of us went home to wait for the trick-or-treaters. We've been gone the first couple Halloweens, so I'm curious to see how many we get. Luckily I've got 20 pounds of candy to give away. 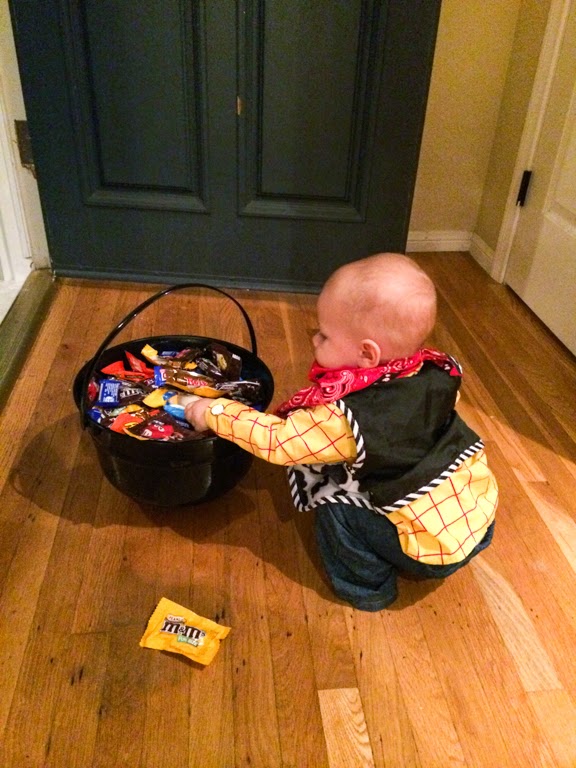 Ian enjoying the big candy bucket, tossing everything on the ground. 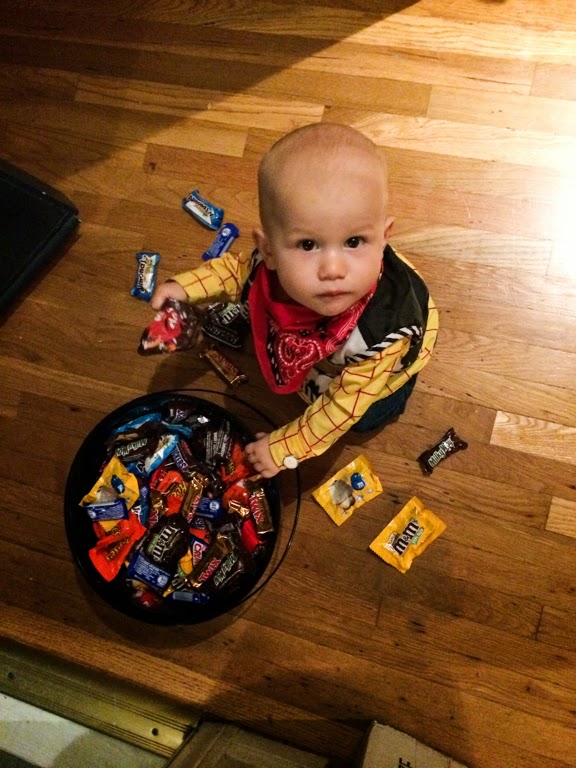 T and I were wondering if he'd be scared of the kids in costumes, but he loved it. Any time I'd open the door, he'd walk over and look out to see who was there. He got a lot of "He's so cute" and "Aww" comments. 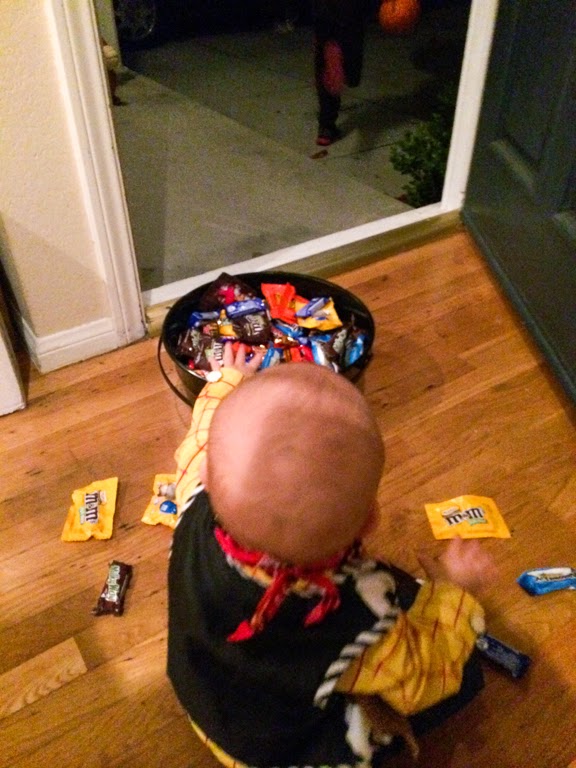 There might have been a little bit of a "trick" component to handing out the candy too. Some kids might have received a slobbery wrapper... 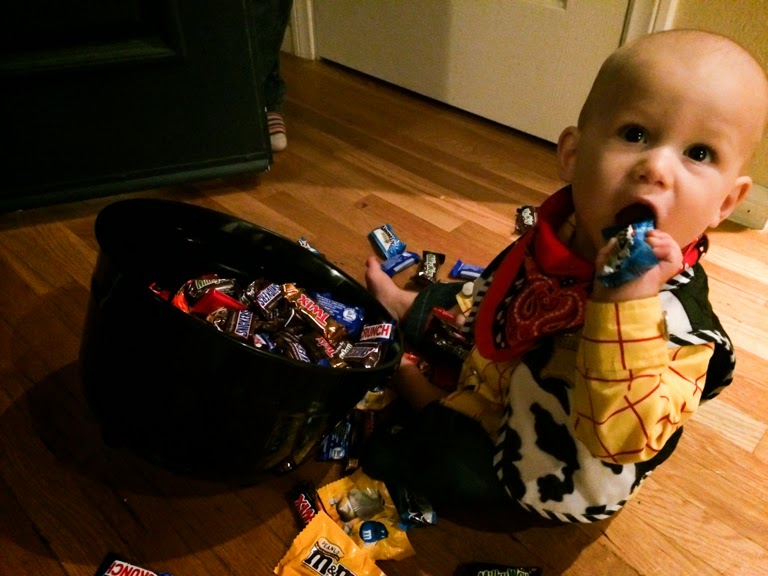 After getting up and answering the door so many times, eventually the three of us sat on the porch and handed out candy. In the end, I think we had over 150 kids visit the house. Wow! 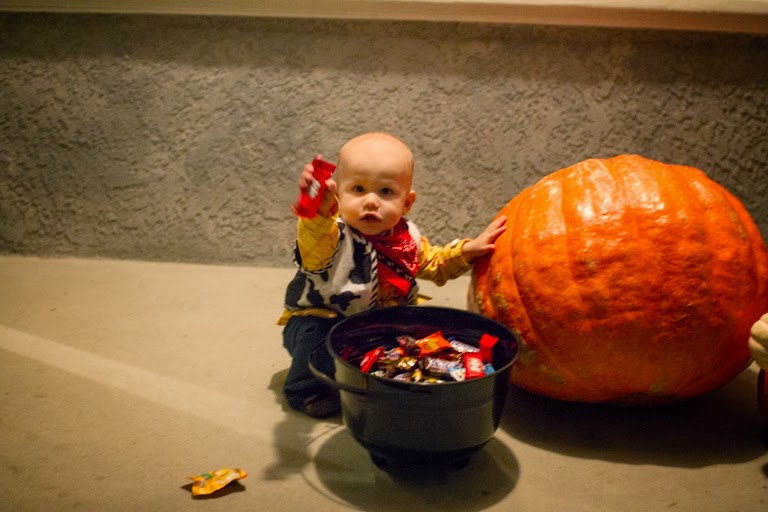 The next day, Theresa was really craving some delicious cheese. We had visited an amazing cheese shop, the Frankenmuth Cheese Haus, while we were in Michigan and we were hoping to find something local that might compare.
A quick review on Yelp showed us that there was such a place called Cheese Addiction and it happened to be in Long Beach at the Belmont Shores close to Jacob. After a quick phone call to Jacob, he was up for joining us too! 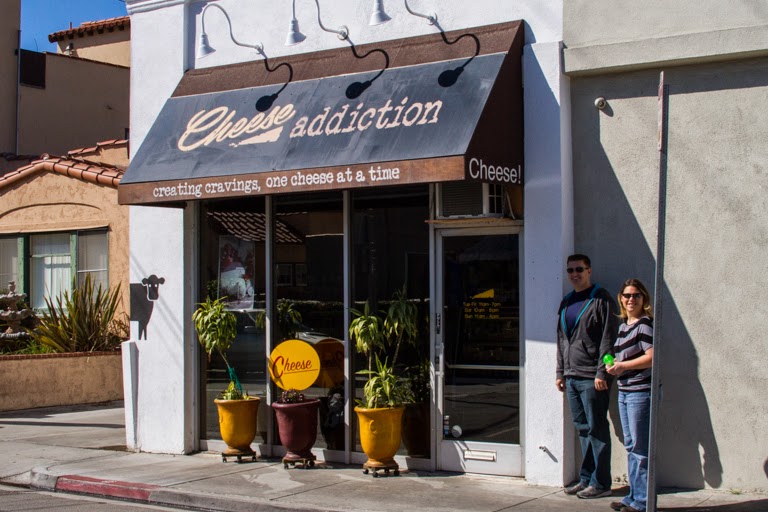 Inside, it was a much smaller shop than we were expecting, and there was only one person working there. I'm glad we were the only ones there.

Theresa really enjoyed the aged cheddars up in Frankenmuth, so we were hoping to find something good. In the case was a 10 year old cheddar from Hook's Cheeses. Pricey at $45 a pound, we still wanted to give it a try. We asked for a sample, but were told there weren't any open packages. Sorry.

There were a few other cheeses we tried, with a tiny thin sample handed to one person and we were expected to split it amongst the three of us. After trying a couple cheeses we did get to try the 10 year cheddar eventually. 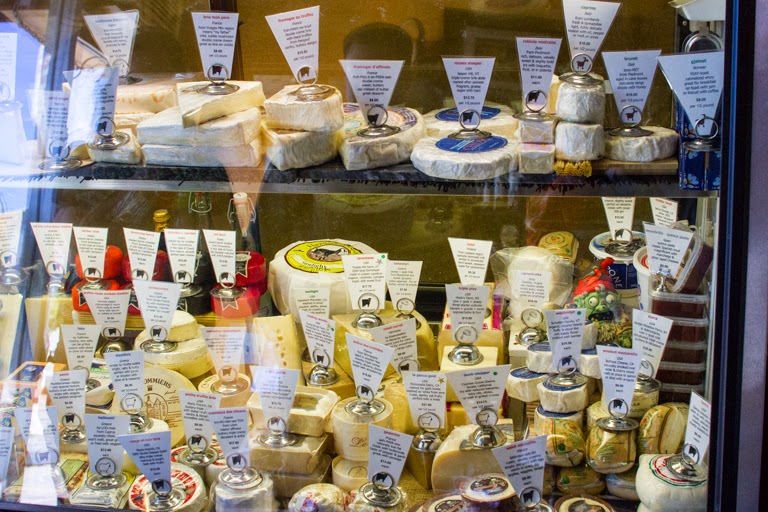 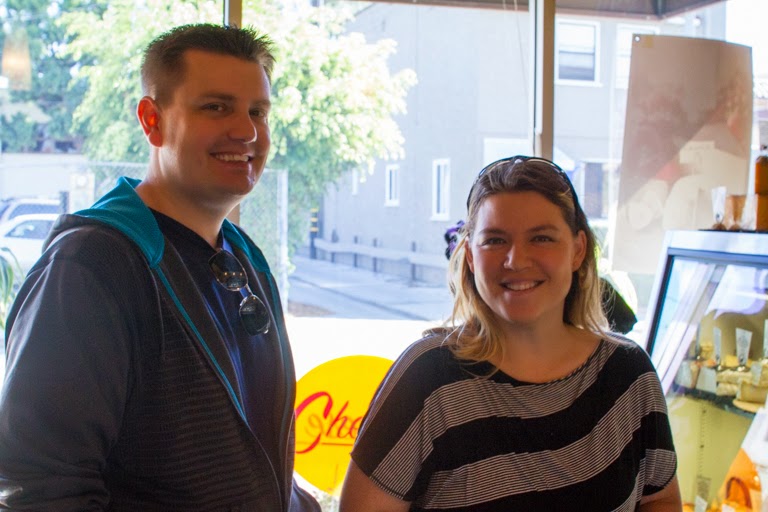 Ian got to try some small samples too. He is becoming a cheese lover. 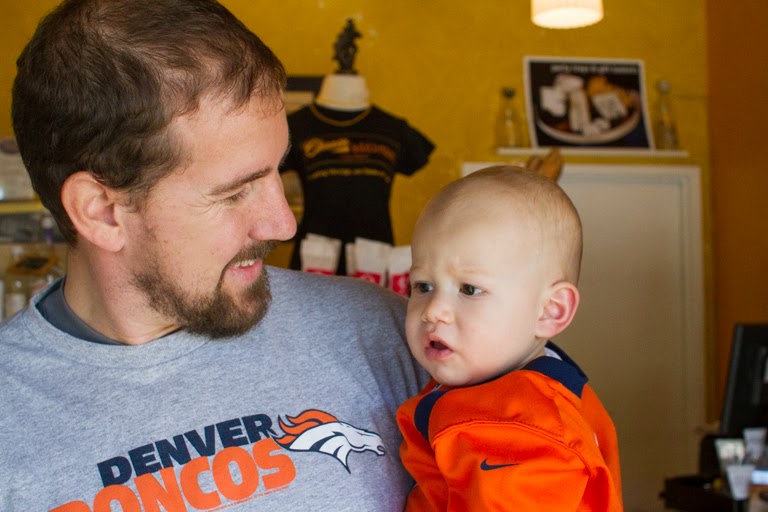 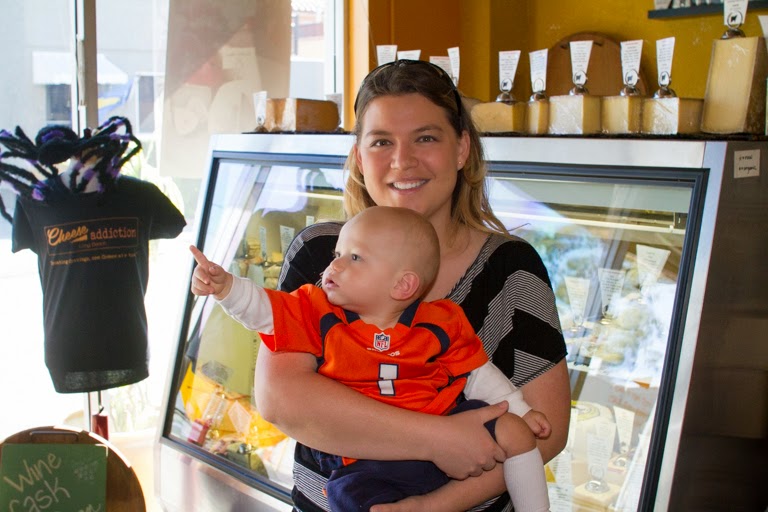