Dining at the Napa Rose with Ruston and Jacob

After exploring the parks we were hungry. Good thing I set up reservations a month ago for the Napa Rose! Theresa and I have enjoyed it every time we've gone. This will be Ruston and Jacob's first time. 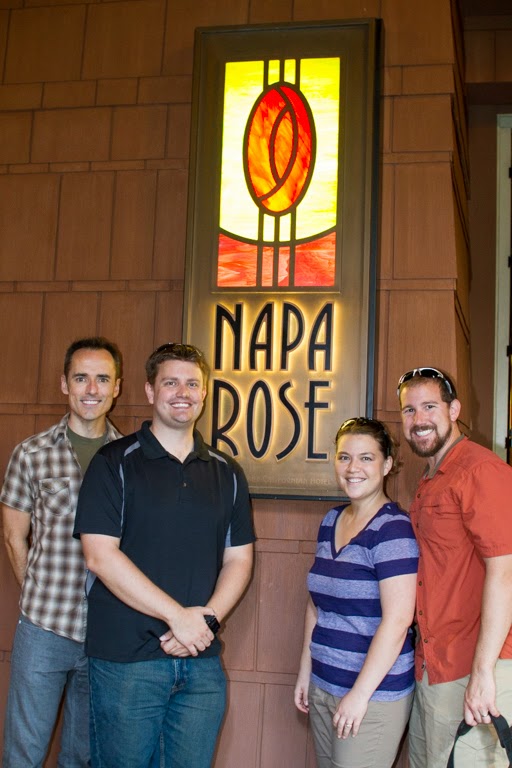 The pumpkins continue over here as well. This one is fake, but I still like the thought. 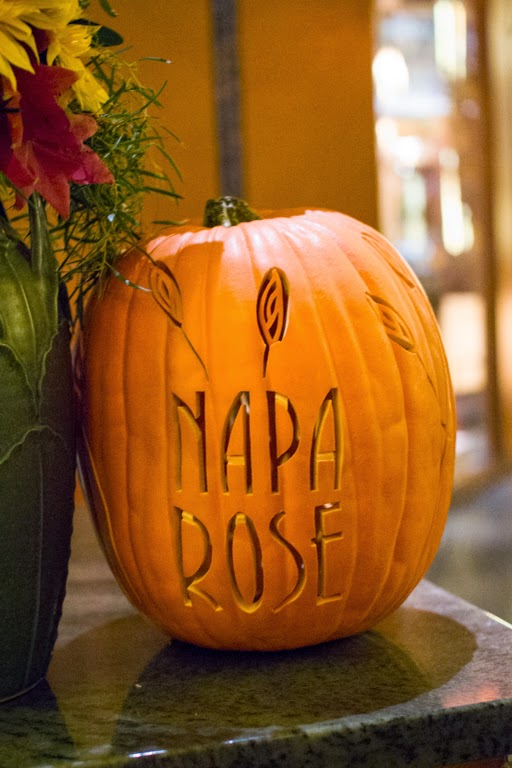 Our reservation was for 5:30pm. We checked in with the hostess and sat in the lobby until we were collected around 5:45. Alright kitchen, I'm looking forward to the delicious creations you're going to make tonight. We took a circuitous route around the dining room to our table which was right in front of the giant window looking into California Adventure. 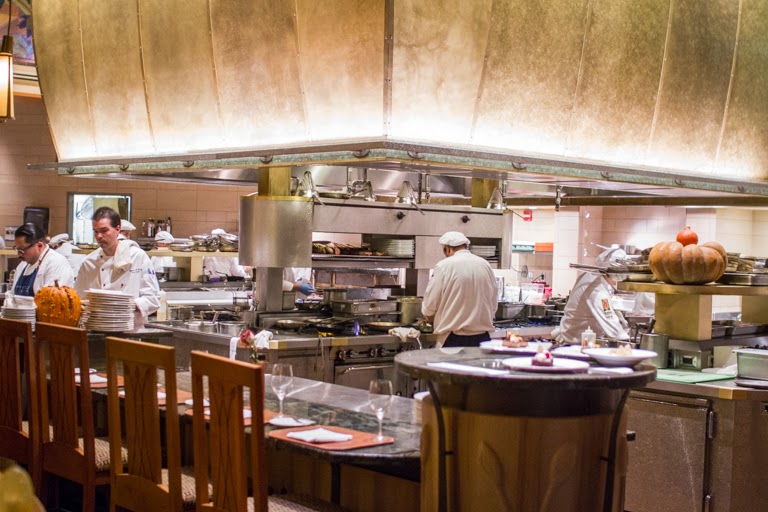 We wondered if these roses on the table were actually from Napa. Ruston looked for a tag saying so, but there was nothing. 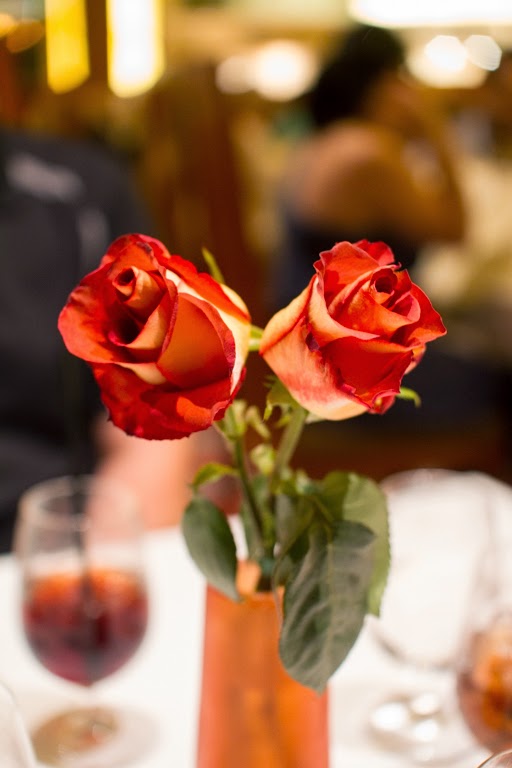 For 57 years of operating, all the way until 2012, Disney employees have had a Christmas party in the park. That changed though in 2012 and they were instead given coupons for various things around the resort. Ruston happened to save his 50% off dining coupon from this past Christmas for just such an occasion. We're going to eat well tonight. 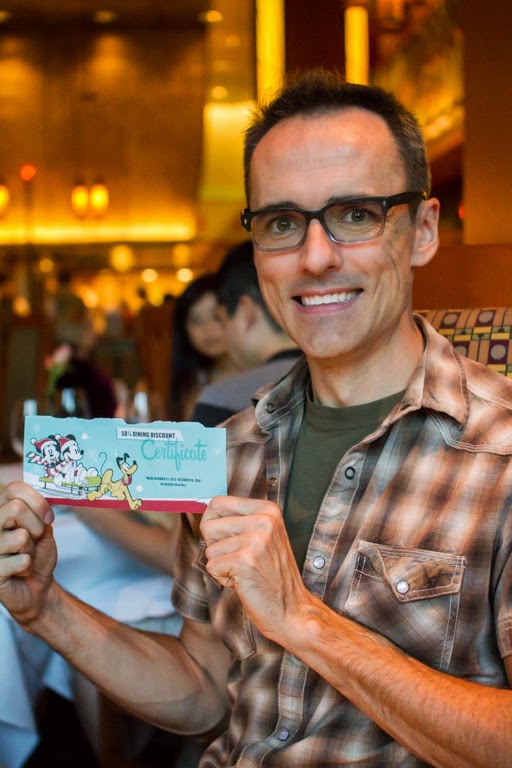 Our waiter David introduced himself and told us the specials while Isoro brought our drinks and the bread basket. There's lots of delicious choices here, but I like the crunchy Parmesan cracker the most. 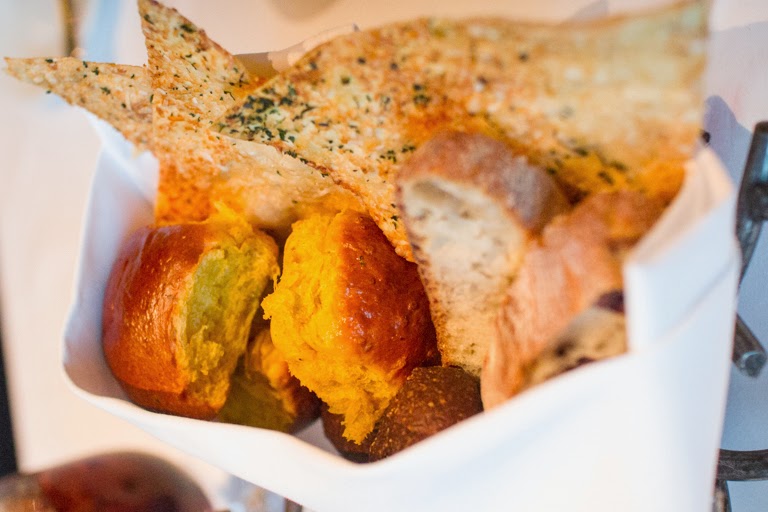 As an appetizer Theresa ordered the Pappardella Pasta
Pappardelle Pasta - Tossed with Coastal Mushrooms, Applewood Bacon, Poached Petit Egg and Roma Tomato Sage Sauce. $18
I thought it looked tasty, but once Theresa cut the poached egg and the yolk oozed out onto the rest of the pasta, that was enough for Jacob to say no thank you. I tried a bite though and it had a good flavor. The thick pieces of bacon were especially tasty. 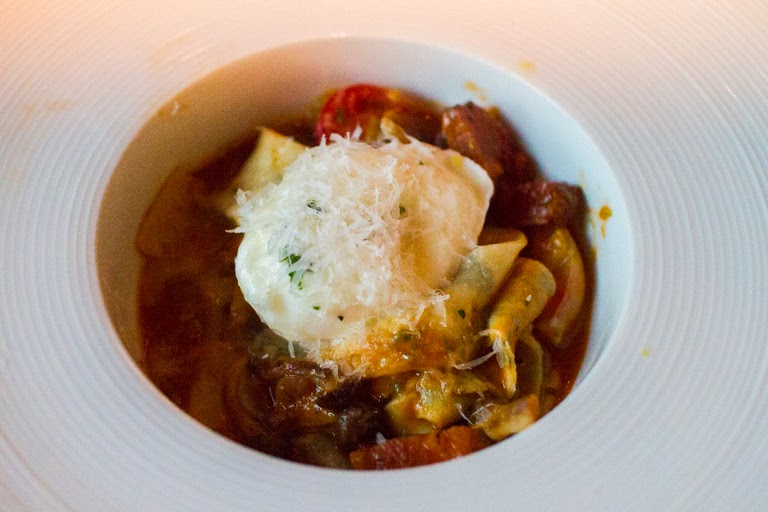 Ruston and Jacob ordered the Smiling Tiger Salad
Smiling Tiger Salad - Tempura fried lobster, spicy beef, Asian greens and coconut-lime vinaigrette. $22
David had the kitchen split the salad between two plates. The salad was a big hit, especially the tempura fried lobster. I think it was Jacob who said that if he could just order 8 pieces of the lobster, he'd eat that as a meal and be satisfied. 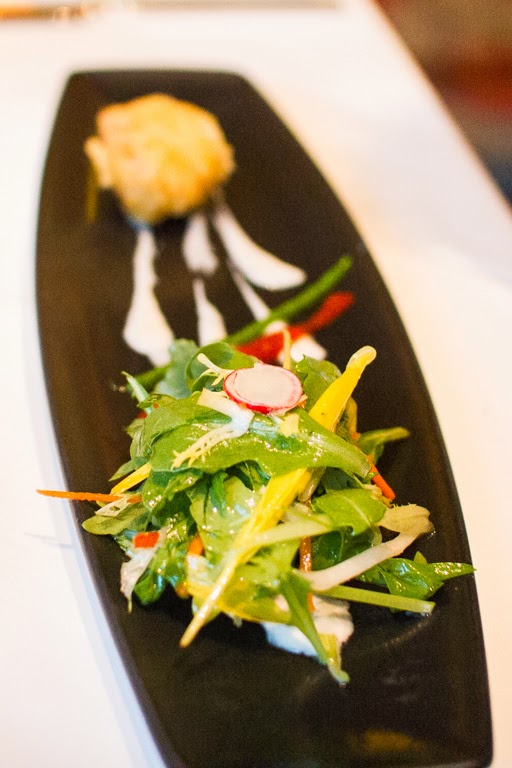 Ever since my first visit here, I've ordered the same appetizer.
Signature Pizzetta of "La Quercia" smoked American prosciutto - Black Mission Fig, caramelized onions, & cambozola cheese. $15
On past visits, this has come with Red Flame Grapes instead of the Black Mission Figs. The figs were just as good as the grapes though and this pizzetta still tops my list of favorite things to eat at the park. 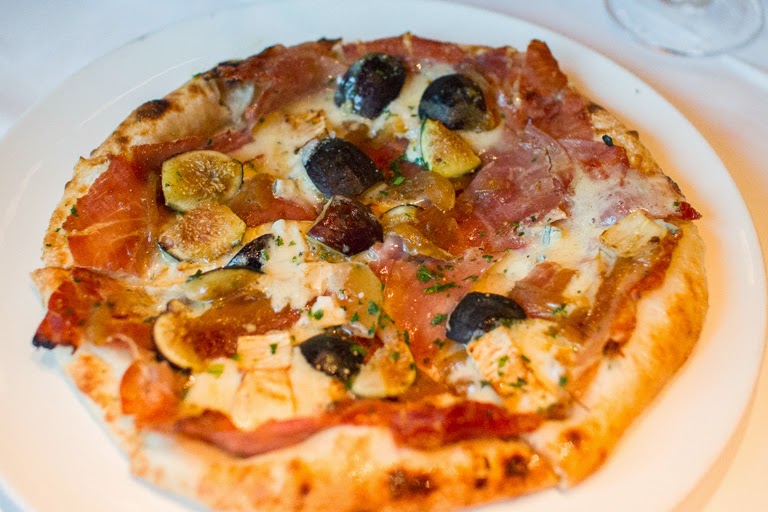 After our appetizers were finished, it was time for the main course. I'm always up for a steak, but since I have had the filet on past visits I went with the Prime New York instead.
Skillet Roasted Prime New York - Fiscalini Cheddar Tater Tots and House Made Worcestershire Sauce  $45
Unfortunately this was my first real disappointment. The steak was sadly lacking in flavor, not even having any salt or other seasoning that I could discern. The worcestershire sauce that accompanied it was needed to bring any kind of flavor out of the meat. It was sitting on a bed of mushrooms, which I don't eat, but once T tried one, she asked for the rest of them. The cheddar tater tot and the broccoli stalk sitting in the cheese sauce were both good though. 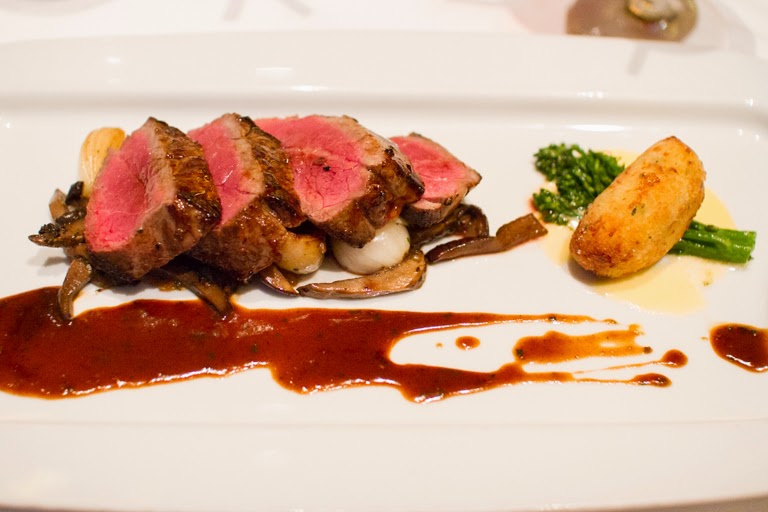 I wish I could make Mac and Cheese this good at home. For a side, I ordered the
Truffled "Mac & Cheese" Orecchiette Pasta with Parmigiano-Reggiano - $12
Truffles are delicious first off, but add cheese and a crumbly baked topping and it's delicious! Not ever straying from a good thing once she's found it, Theresa ordered the filet.
Grilled Angus Beef Filet Mignon - Parsley Root, Black Kale and Red Pumpkin Essence  $45
She ordered her filet cooked medium (glad she's not ordering good steaks well-done anymore) and it came out medium rare. She was a trooper and ate it anyway. She said the steak was seasoned well and had good flavor. The pumpkin sauce was "interesting" but she wasn't sure it was such a good pairing with a steak like that. She said I could quote her as saying "It was good, but not as good as the steaks Joe makes." I think she was feeling vegetable deprived too because along with her steak, she ordered two vegetable sides. The first was
Baby Squash and Blistered Toy Box Tomatoes  - with Shaved Ricotta Salata.  $10
She said the baby squash was excellent. I tried the tomatoes and also found them to be delicious. 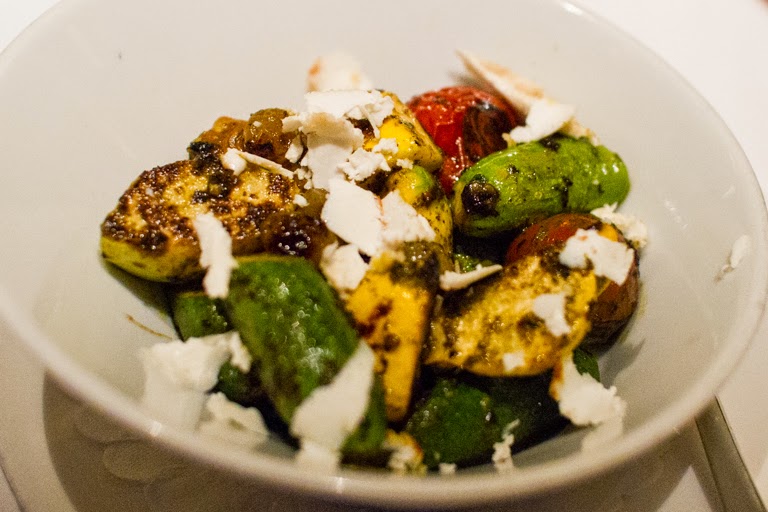 Her second side was
Sauteed Tender Green Beans - Dusted with Neuske's Ham and Mint.  $10
These were just green beans and weren't anything special to her. I think she was hoping for something on the level of the delicious brussel sprouts she had had on a previous visit. 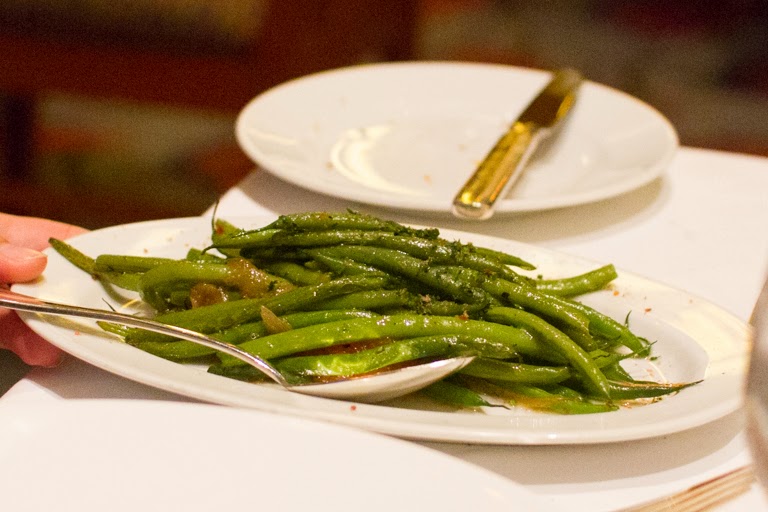 Ruston ordered the
Pan Roasted Sustainable Fish - Laughing Bird Shrimp, Roasted Red Bell Pepper Fritters and Avocado Aioli.  $42
Not being a fan of fish, I didn't take the offered sample but Ruston said it was good. 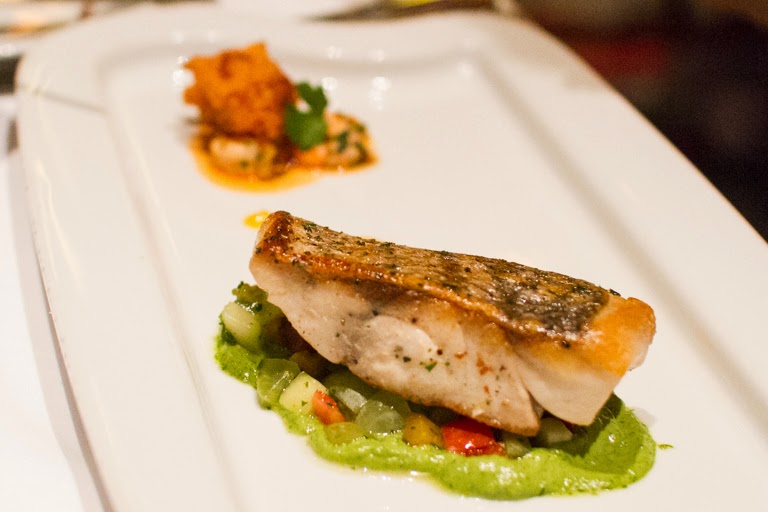 Looks like we all ordered a different entree. Jacob ordered
Barbacoa Style of Black Berkshire Pork Loin - Green Garbanzos, Charred Sweet Peppers and Sherry Romesco. $42
I did try a taste of this one and it was also very good. If I could do it all again, I'd order either this or the filet. 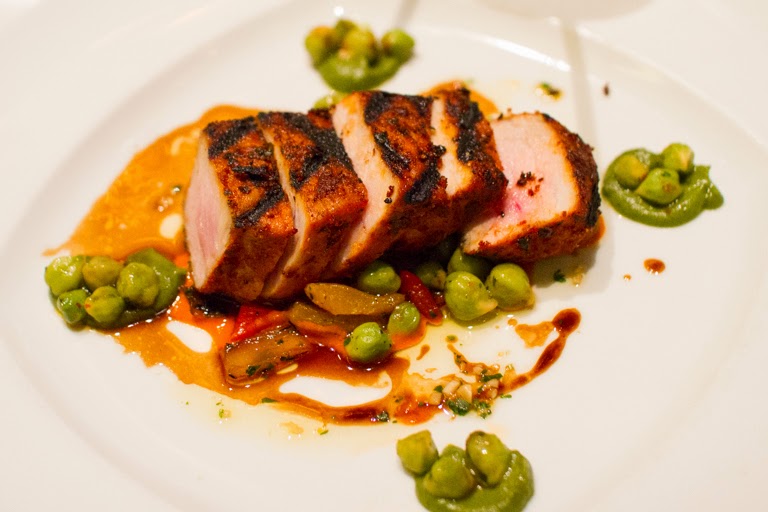 I dare say we enjoyed our meal. 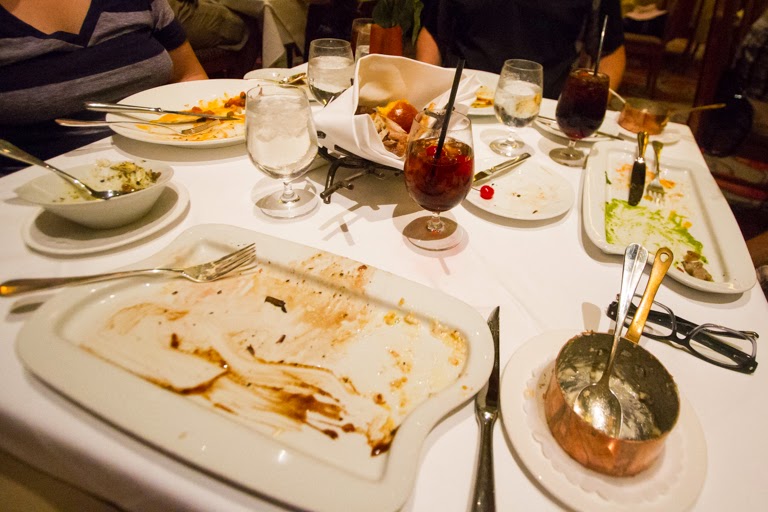 We had a great time enjoying each other's company talking about some of our past adventures together and planning out the next ones. 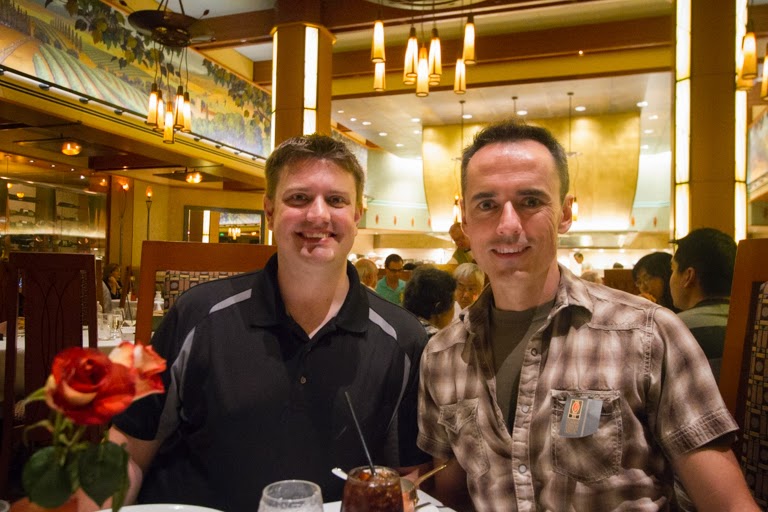 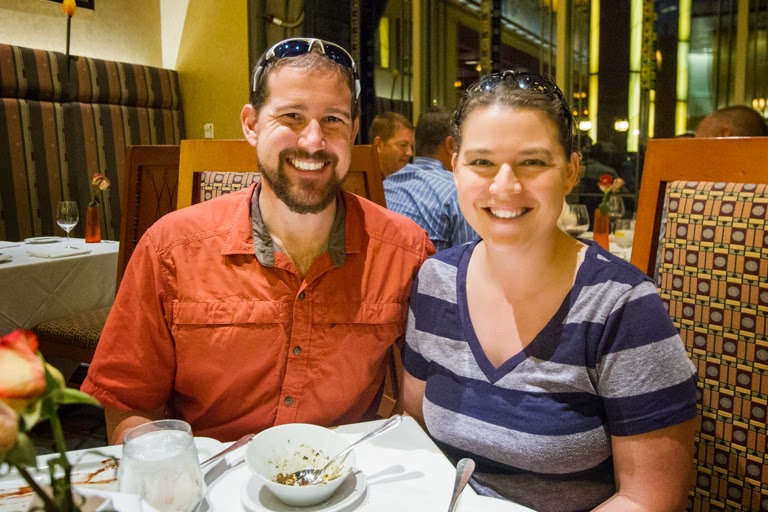 Do we maybe have room for a little dessert? If I'm going to eat cheese, I like to know that it has been diligently selected. Maybe not tonight though. 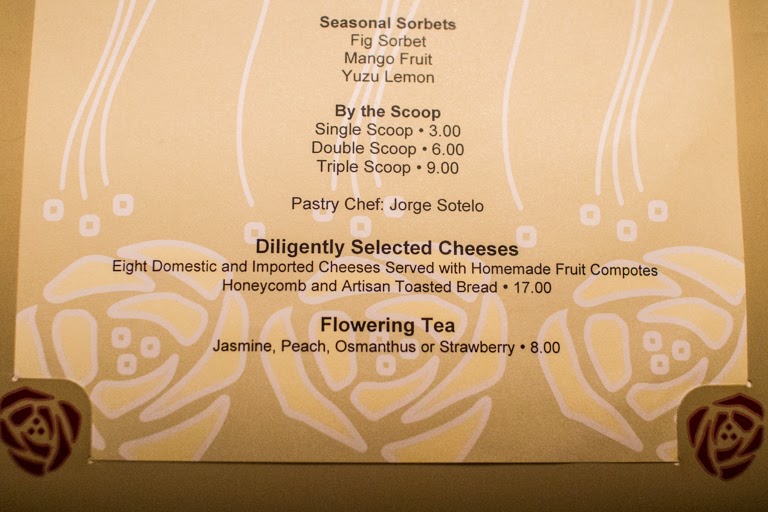 Ruston wasn't sure about ordering anything for dessert, but he has been having peanut butter cravings lately. When he saw this on the menu, he knew he'd have to try it.
Peanut Butter Croquantine with Manjari Chocolate Ganache - Caramalized Bananas $13
The bite I had was rich and peanut buttery and very tasty.
Oh and we're celebrating Ruston's birthday today too. His dessert came with a candle and Happy Birthday written in Chocolate underneath. No waiters gather around our table to sing, so it was left to the three of us to sing to Ruston and wish him a Happy Birthday. 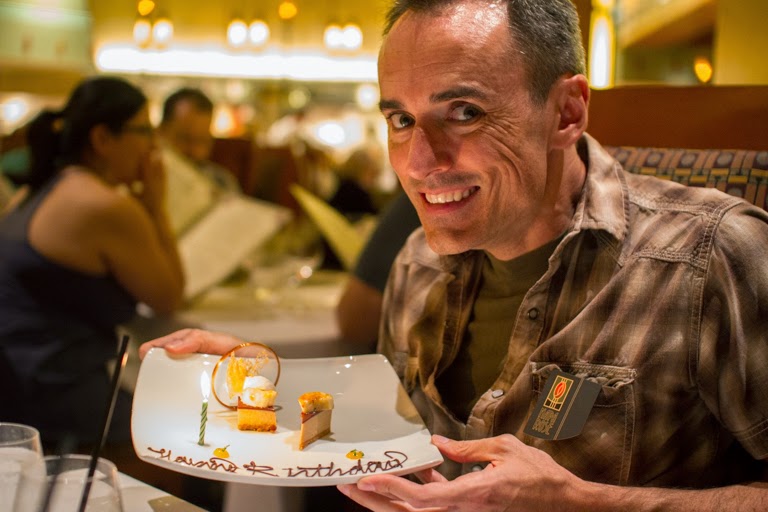 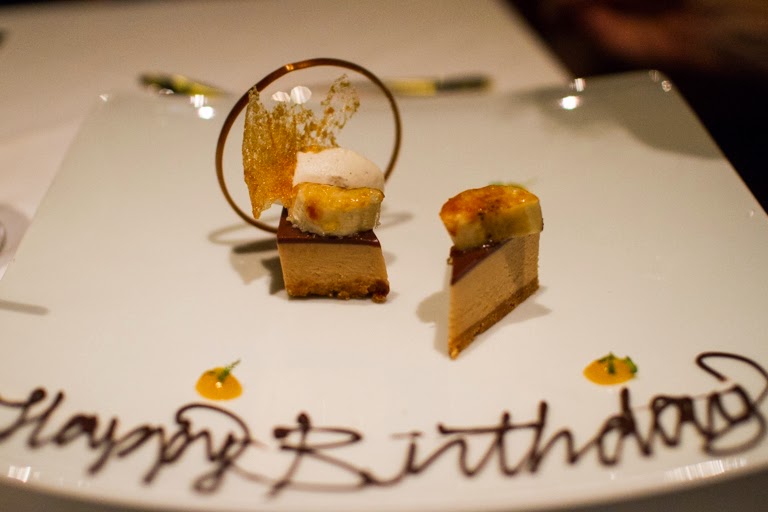 Both Jacob and I chose
Pumpkin Caramel Crunch Whoopie Cakes - House Made Pumpkin Soda $12
The chocolate whoopie cakes were good, but the pumpkin whoopie cake was the best. I think David said these were lingonberries. They were super tart by themselves, but eaten with the whoopie pies it balanced out. 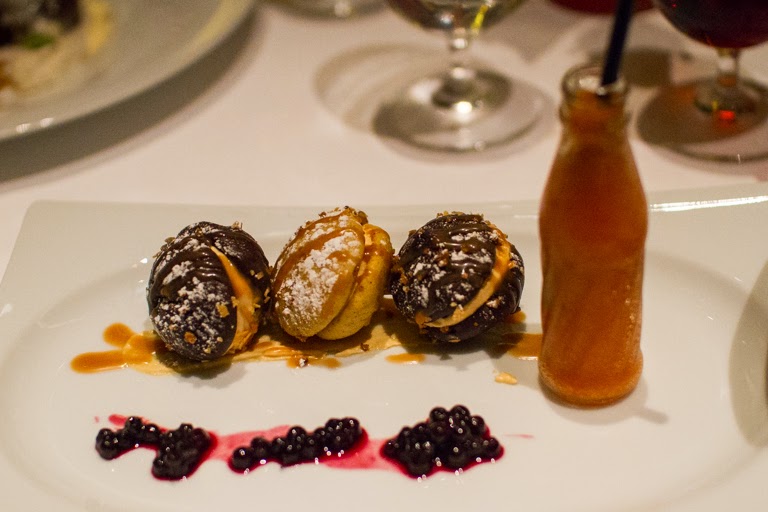 Pumpkin soda? Yep, a tiny little bottle of pumpkin soda. And no it wasn't cinnamon, nutmeg, cloves, or any of that other pumpkin spice. This tasted just like a sweet pumpkin drink. I wouldn't drink a whole glass of it, but it was nice to sample. 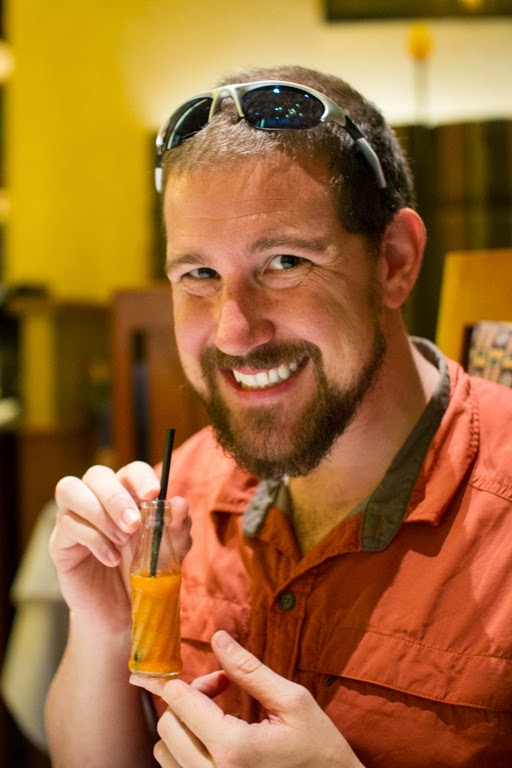 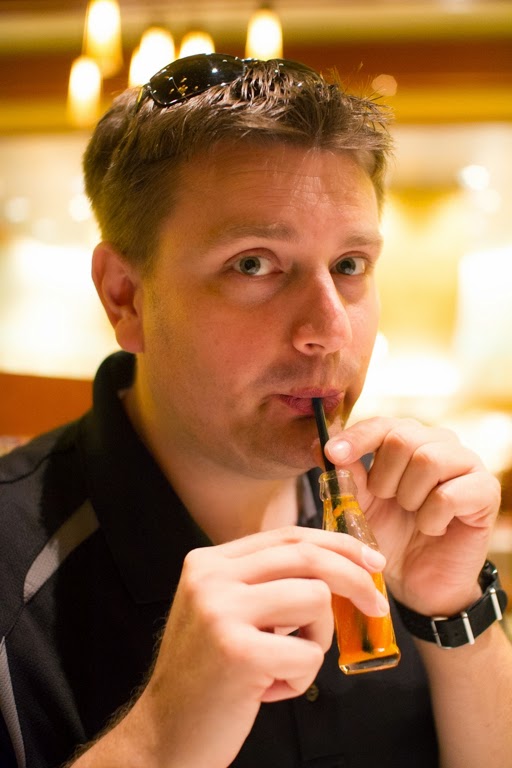 Along with our desserts, Jacob and I both ordered scoops of ice cream.
Artisanal Ice Creams - Single Scoop - $3
I ordered the Scharffen Berger Chocolate Chunk. The chocolate ice cream was incredibly rich, tasting more like a dark chocolate ice cream.
Jacob chose the Tahitian Vanilla Bean, which was very creamy and delicious.

Theresa decided to try the
Seasonal Sorbet - Single Scoop - $3 - Fig
She'd never seen fig flavored sorbet before and was curious to try it. It wasn't nearly as sweet at we were expecting. Then entire table tried a bite but didn't need any more and left it to melt. 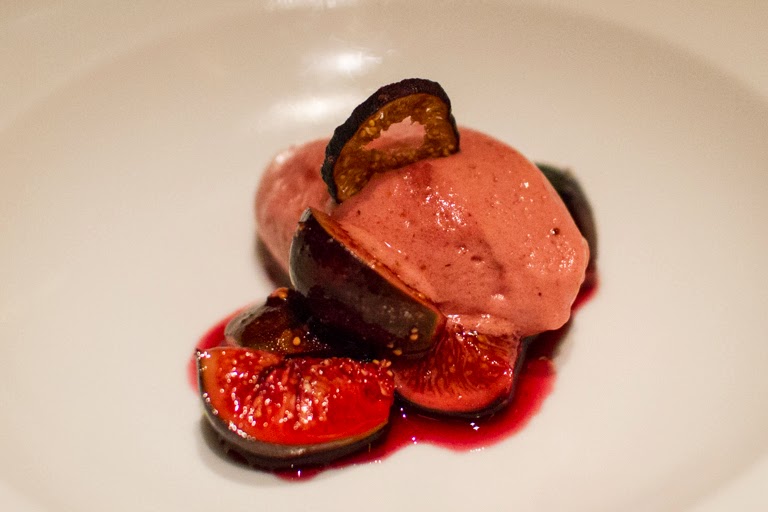 Lastly, Theresa ordered the
Warm Sticky Toffee Pudding Cake- Roasted Pineapple and Vanilla Chantilly $12
Initially disappointed by the size, once she took a bite she understood why. This tiny little cake had a potent amount of toffee flavor in it. This was my the favorite dessert of the night, and I was lucky Theresa decided to share. 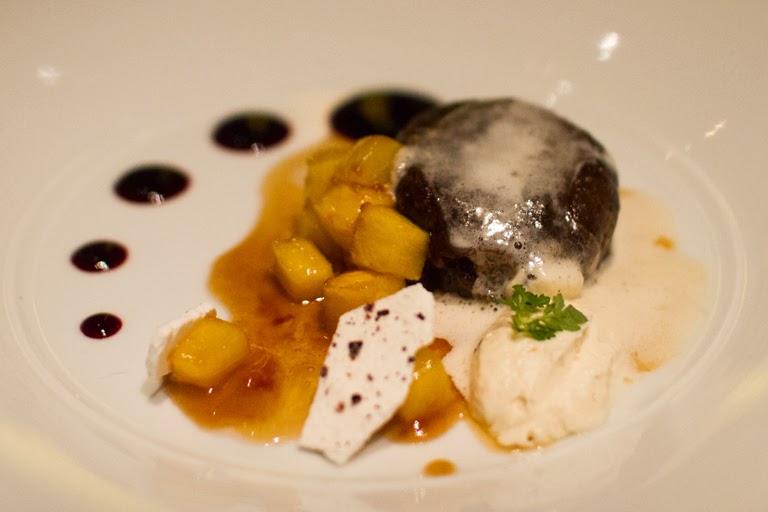 All in all, we had a fantastic night sampling all sorts of delicious foods and enjoying our time together. The Napa Rose remains one of my favorite restaurants at the Disney Resort and if you've never tried it, I highly recommend it!
Posted by Joe at 12:24 AM