Lion King at the Mandalay Bay in Las Vegas

This has just been a big week for us going to see shows.  Chanticleer on Thursday, Cirque du Soleil on Sunday, and then Thursday we made plans to fly to Vegas to see the Lion King. 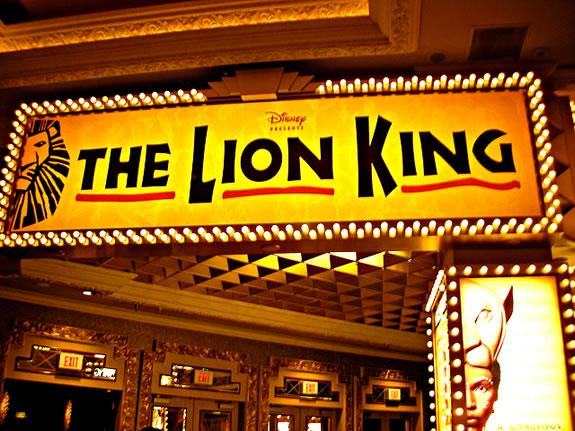 
We learned that the Lion King would be leaving Las Vegas at the end of December and since we had already missed it when it was in Los Angeles, so we didn't want to miss it again.
We finished work early on Thursday and jumped on a plane to Vegas.  Theresa was able to get a great deal at the Mandalay Bay hotel where the Lion King was playing.  Only $70 per night for a room plus a $100 resort credit.  Can't get too much better than that.
Not only that, but she also bought a few Restaurant.com certificates for the restaurants at the Mandalay Bay.  Most were good for at least 70% of our bill, so we decided to try a bunch of their restaurants.
Our first meal on Thursday night was at the Noodle Shop.
Neither of us was impressed here.  The food was just meh.  Theresa didn't like her Kung Pao chicken at all.  I got Sweet and Sour chicken that was just alright.  Nothing special.

Breakfast the next day was at Raffles.  I had some delicious coconut pancakes with hash browns and Theresa had the same.

We walked around a little more exploring the different shops around the Mandalay Bay including the Peter Lik art gallery.

(not my photo)
We saw some beautiful pieces of photography.  They are printed on a metallic paper that just makes the colors really pop and looks amazing.  Prices ranged from $3000-$6000 for the 1.5 meter prints, and $8000-$12000 for the 2 meter prints.  We have quite a few empty walls in our house that could use some art.  That's a little expensive for us, so I'm going to be going through my photos and seeing what I can do with my photos.  I can order large metallic prints online for ~$150 in large sizes, so I can do a lot of experimentation before I even get close to $3000.  I'll be sure to post results on this blog later.

For lunch we ate at Fleur.  Both of us got some delicious hamburgers and fries.  Theresa always complains about having too much meat on her burgers, and I don't want any lettuce or tomato, so she cut her burger in half horizontally gave it to me, and I gave her my lettuce and tomato.  It worked out well for the both of us.

After lunch, it was time to go see the Lion King. 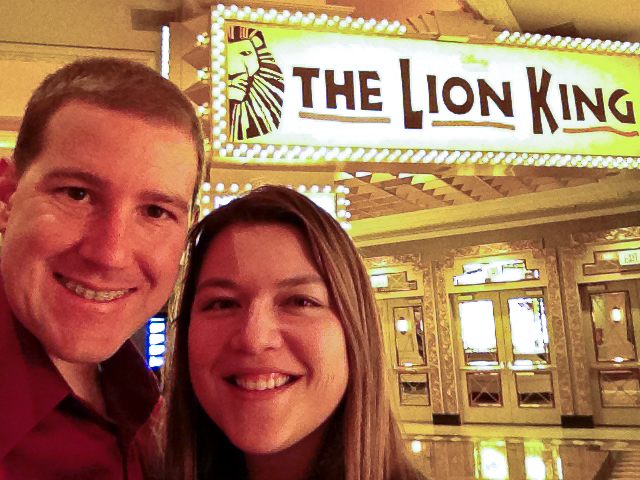 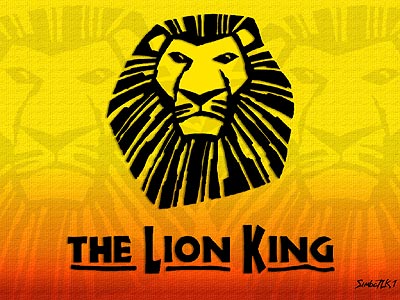 (not my photo)
Because we figured it'd be our only time to see this show, Theresa wanted to get good seats.  We ended up getting the VIP seats that were maybe 7 rows from the stage and in the center of the theater.  Also with these seats you get a special gift, which turned out to be 2 Lion King ball caps and a program with photos from the show. 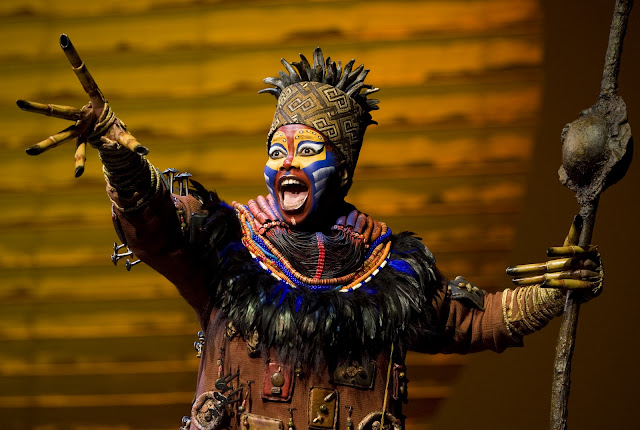 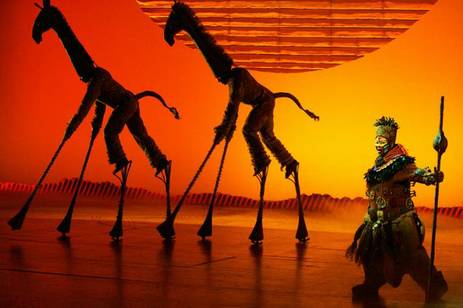 (not my photo)
The theater was beautiful too.  It's really nice to be in a theater that is dedicated to a show.  The show itself was really good.  The actor who played the young Simba had all the same youthful energy as Simba from the movie.  Mufasa had a great deep bass voice like James Earl Jones.  My favorite though was Scar.  The actor did a great job representing Scar from the movie.  In all, it's right up there with our favorite Disney stage show we've seen, Mary Poppins at the Ahmanson Theatre in LA.

After the show it was time for our second treat of our trip.  Theresa made reservations to Stripsteak, the Mandalay Bay's signature steak restaurant.  They have a Kobe filet that I wanted to try since I've never had Kobe beef before.  Only $72 for an 8oz portion with no sides.  Before the steaks were brought out, a complimentary fry basket is provided.  It features 3 different fries with 3 different sauces for dipping.  Both mine and Theresa's favorite was a fry that was made with truffle oil and had a truffle dipping sauce.  They were both delicious.

The steaks both came out and they were very good.  I was expecting a little bit more because of all the hype surrounding Kobe beef, but it was still tasty.  I also got a side order of Truffled Mac and Cheese that was delicious.  I'm going to have to look at recipes when I get home and see what I can make with truffle oil because it is really tasty.

The next day, December 24th, we left for the airport to head back to Los Angeles to do some shopping and house prep.  All of Theresa's family are coming on the 25th to spend Christmas with us.
Posted by Joe at 3:14 PM