After having been at the Dream Suite for way too short of a time, it was time to head to dinner. Why did we book reservations when we could stay here in this suite longer? Anyway, it was 4:15pm and we had 4:30 reservations all the way over in California Adventure. 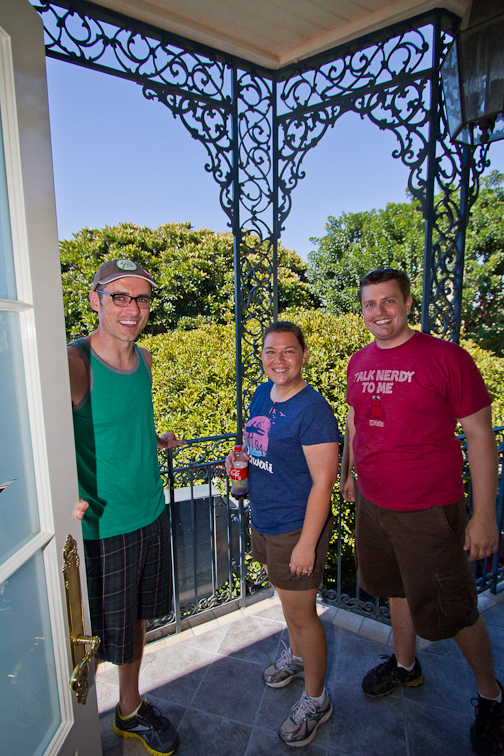 Going up and down these stairs never got old. 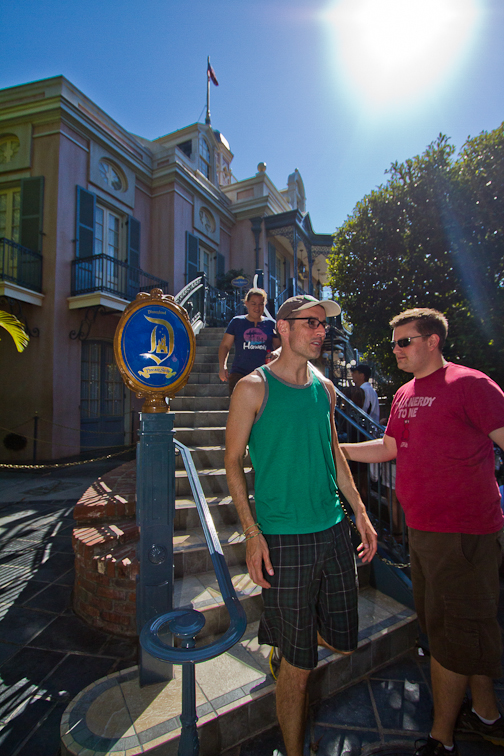 So where is dinner? Why, the new Carthay Circle Theater over in DCA. 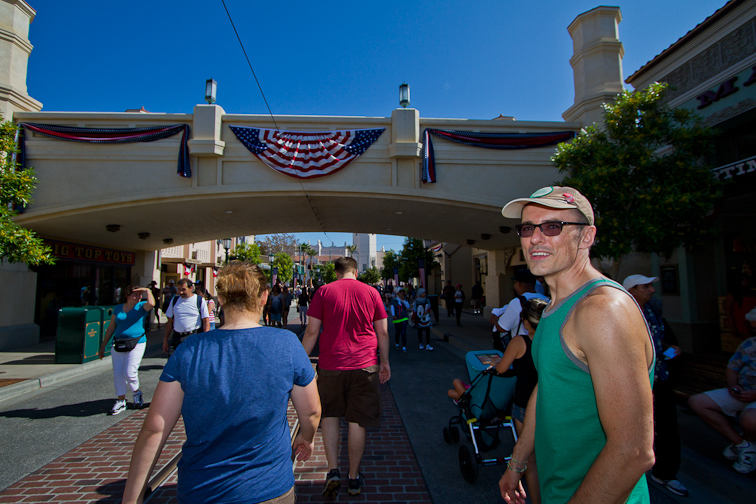 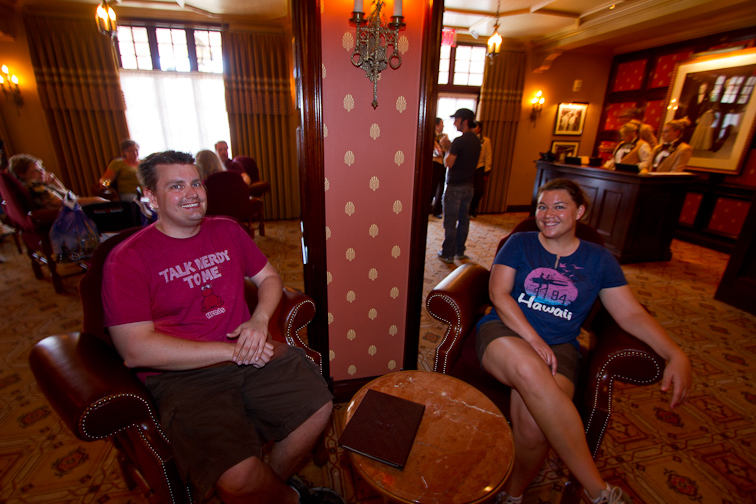 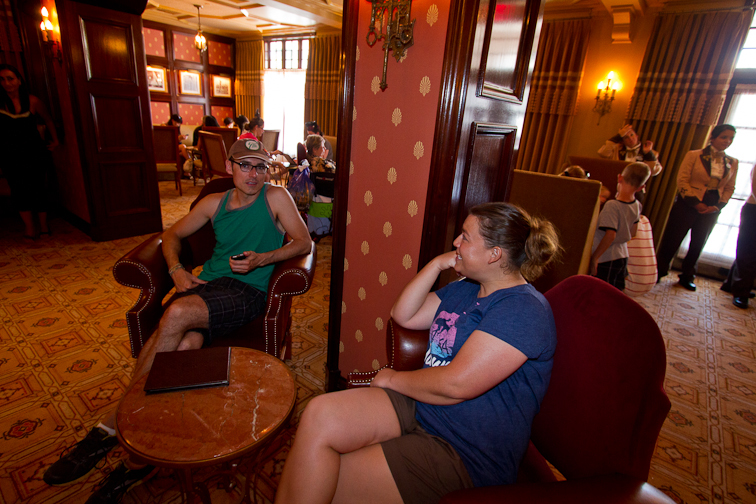 Shortly after getting there, we went to our table. The restaurant looks absolutely beautiful, but I think all of our minds were back on our room in Disneyland. 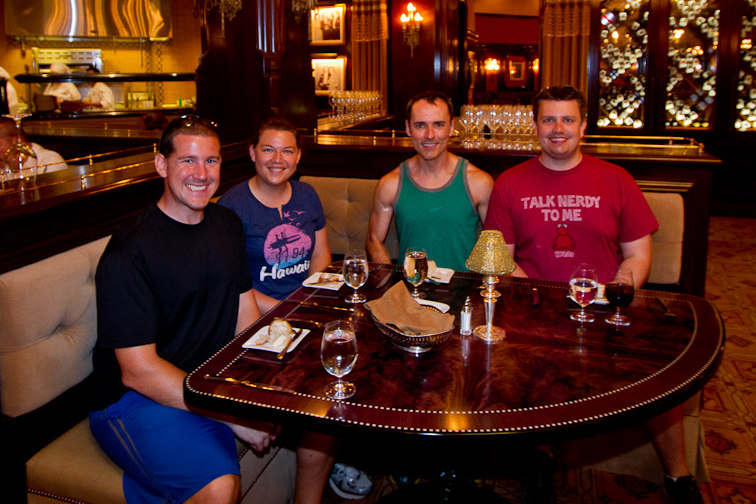 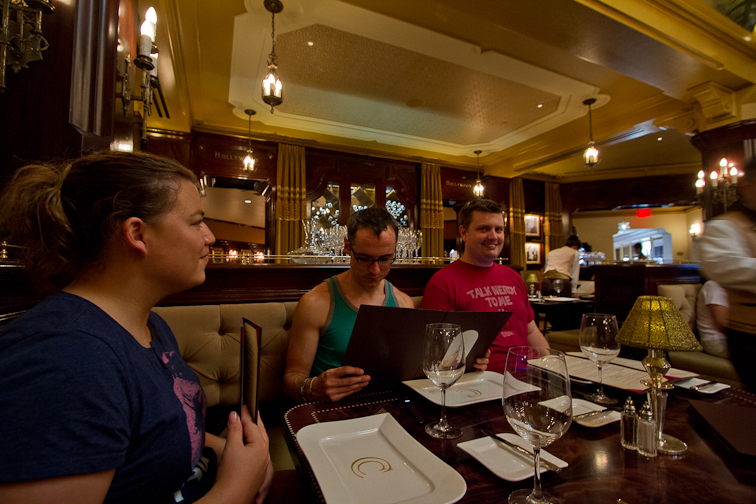 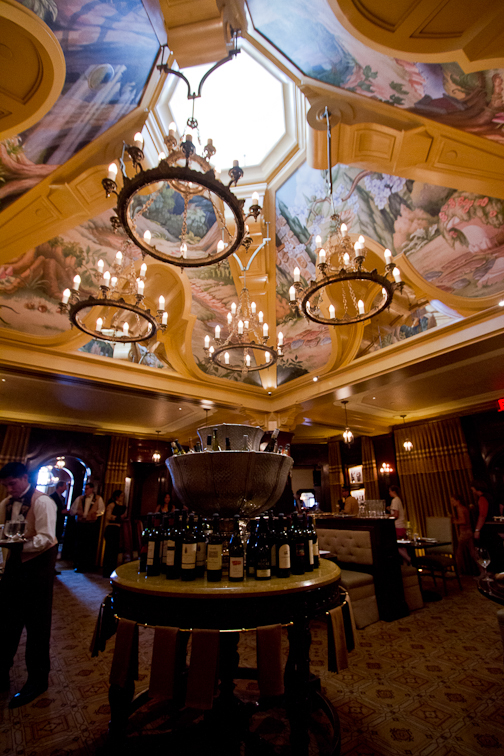 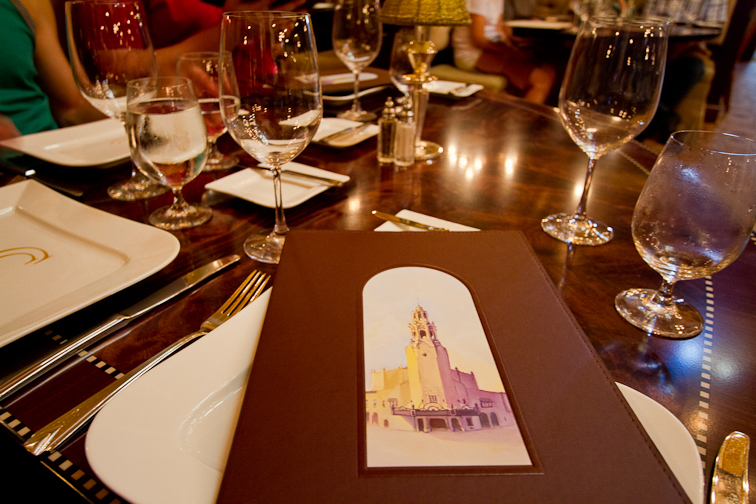 We got the "Biscuits" but they were really fried bread balls filled with cheese. Tasty, but rich.
Theresa and I got the rib eye and weren't disappointed. 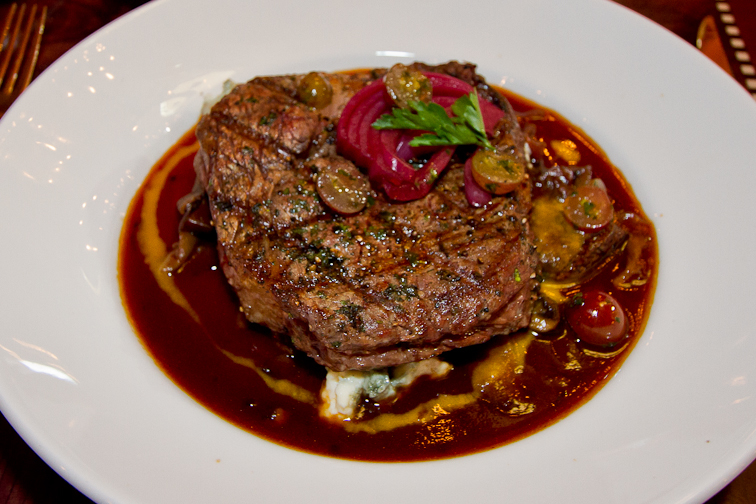 Ruston and Jacob split the pot roast and stuffed quail. They enjoyed theirs as well. 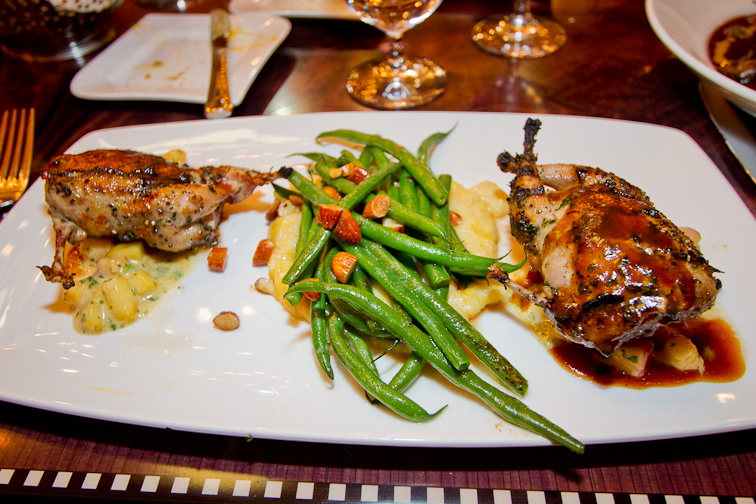 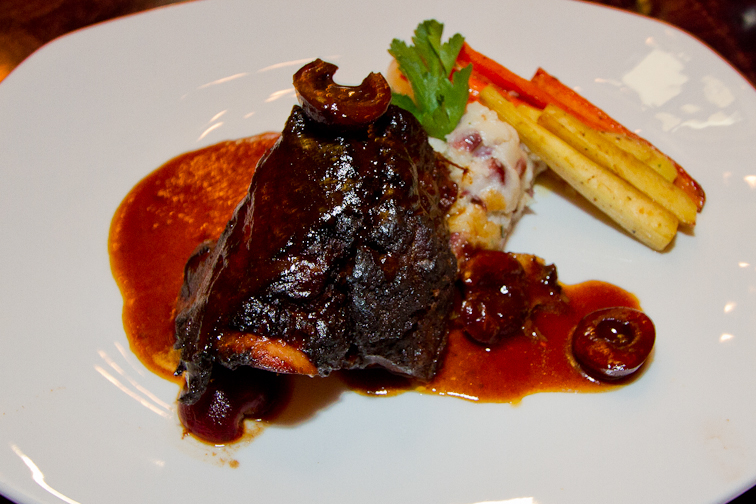 The Carthay Circle restaurant is a place we'll have to come back to and spend more time later. For now though, we really wanted to get back to the Dream Suite. 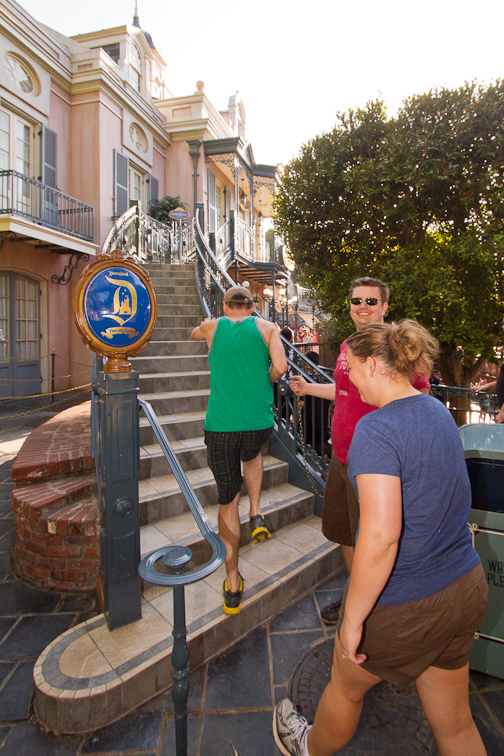 One of Theresa's favorite magical moments - Ruston, Jacob, Joe and I had dinner reservations at Carthay Circle Restaurant. It was a very nice dinner, but we decided to rush the end so we could get back for the first “magical moment” at 6pm. There was supposed to be a special show in the suite, and we didn’t want to miss it. So, we high-stepped it back from California Adventure to the Dream Suite, and got there about 5 minutes early. To my surprise, we had an even better “magical moment” waiting for us than the 6pm show. On the mantle, a digital photo frame was flipping through digital pictures from our arrival, making it appear that indeed we had returned home. Someone had also left out snacks (I think it was the fairies); we had a fully stocked refrigerator, fresh fruit and chips, and there was this beautiful clock box made entirely of chocolate with chocolate truffles inside. It was such an unexpected “sweet” surprise!

At 6pm, the clock chimed 6 times, music started playing, then Geppetto appeared in the clock. Also the mirror above the fireplace dimmed and a castle with a magic wishing star appeared.

As Theresa mentioned above, we looked around the room and saw that now right beside the guest book, a digital picture frame had appeared and they were already showing photos from the digital camera they took earlier. 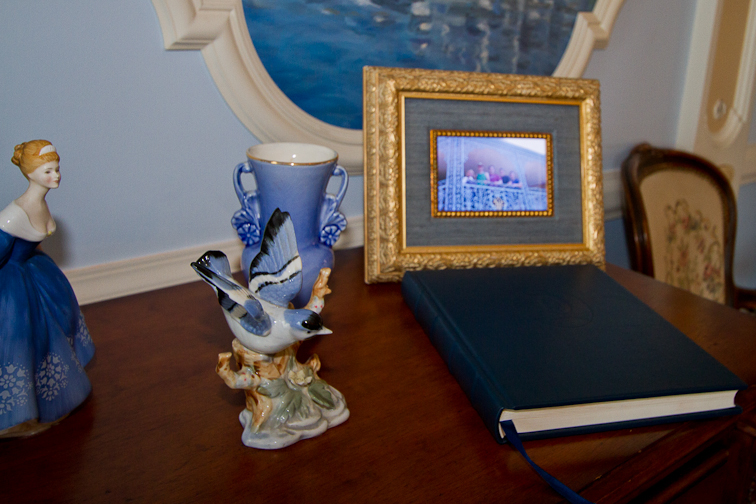 There was also new food on the small table in the parlor. An awesome clock made entirely of chocolate, a fruit tray, nuts, apple crisps, and other tasty treats. 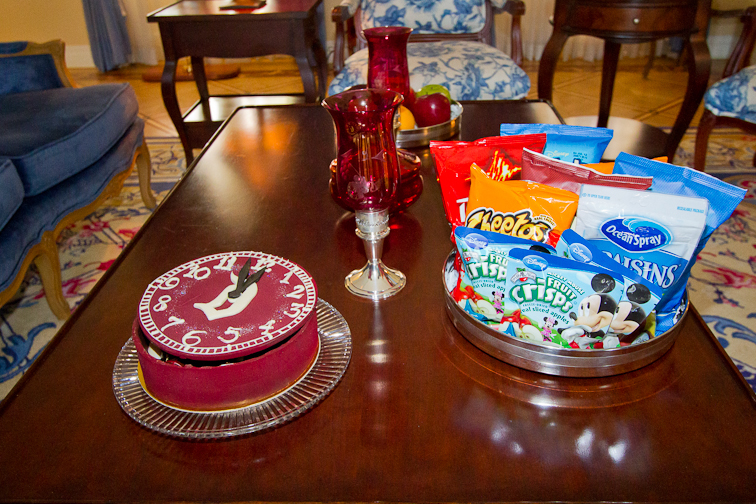 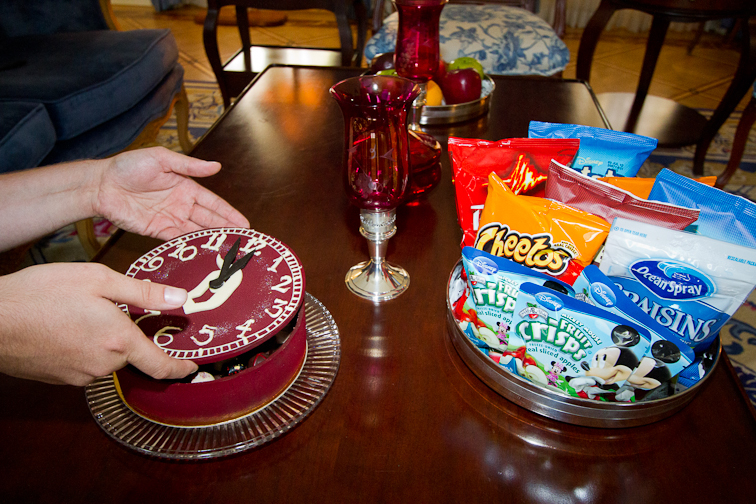 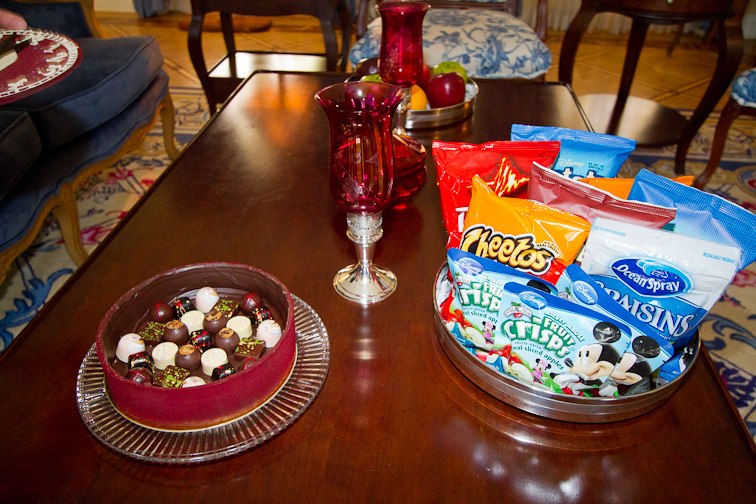 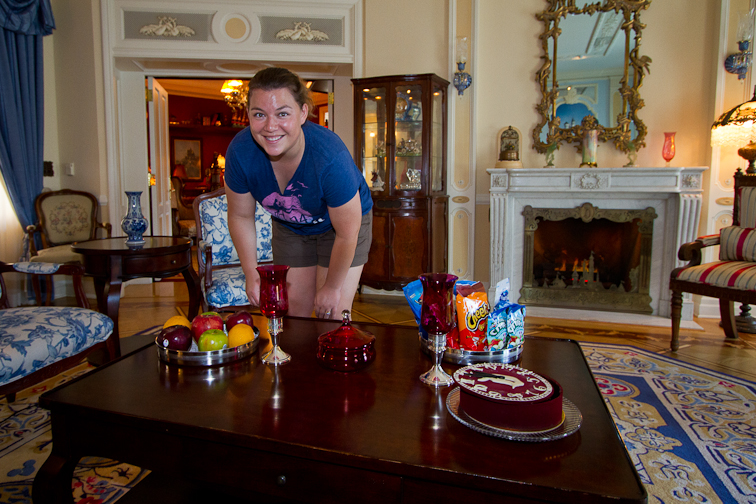 Not only that, but our fridge is now completely stocked with Cokes, Sprite, Water and OJ. 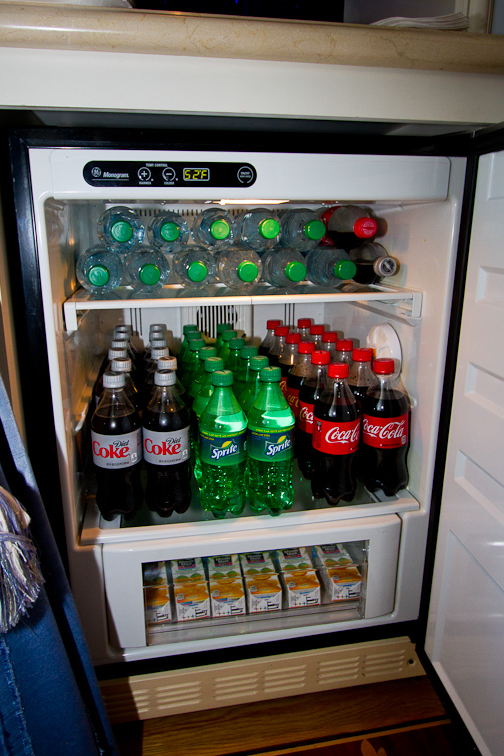 We have 1 hour until our first guests can get here, so we're going to chill for a while then get some food ready. What am I saying, chill? We're going to explore and explore, take photos, and pretty much just be in awe of this special place.