All the way back in 2016, Downtown Disney closed up the House of Blues. A short time later, construction started on the Splitsville Luxury Lanes Bowling Alley. Ian asked what they were building and ever since we told him, he's been asking about when we can go bowl. Finally in March, Splitsville opened.

I'd been toying with taking Ian, but the prices have been scaring me away. $19 per person before 4pm and $24 afterwards and on weekends, taking a whole family is easily $100. I'd previous enquired about renting a lane for an hour and was told it was $175/hour for up to 8 people. Eh... that's a bit pricy.

Cut to Thursday, when T showed me an advertisement that popped up on her Facebook page. Now $10 is more reasonable.
Ian, we're going to Splitsville! 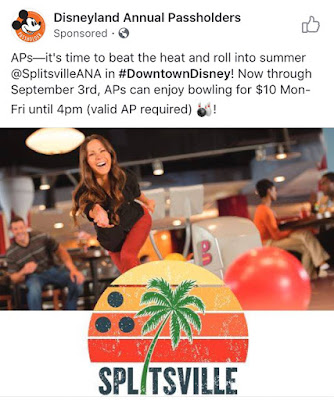 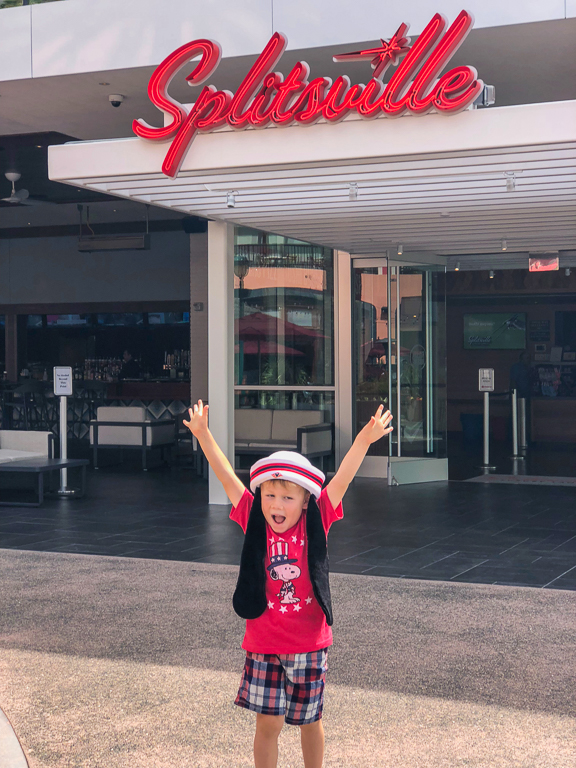 Joining us today are Rita and Aubrey. Splitsville opened at 10:45am, and our whole group arrived shortly afterwards. Upon checking in at the front desk, they took down all our names and shoe sizes and asked us to wait just a minute. 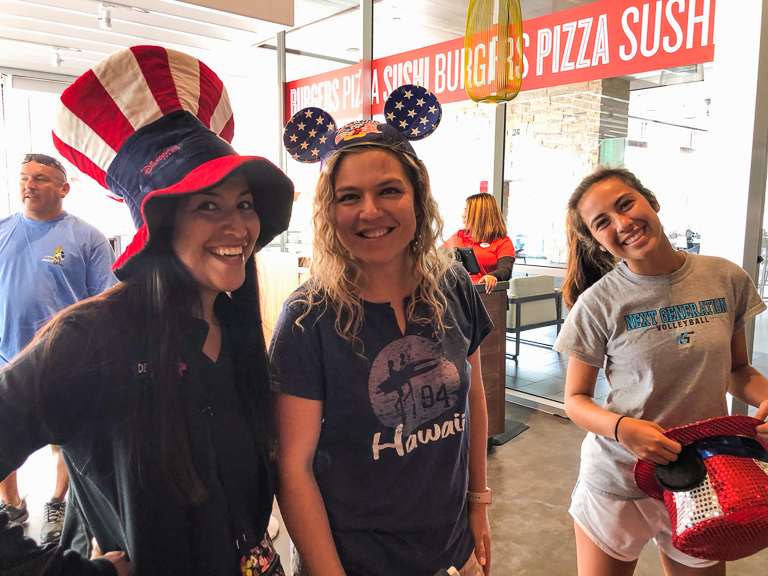 They put all our shoes into a bin and carried them to our lane for us. That must be some of the luxury part of their name. 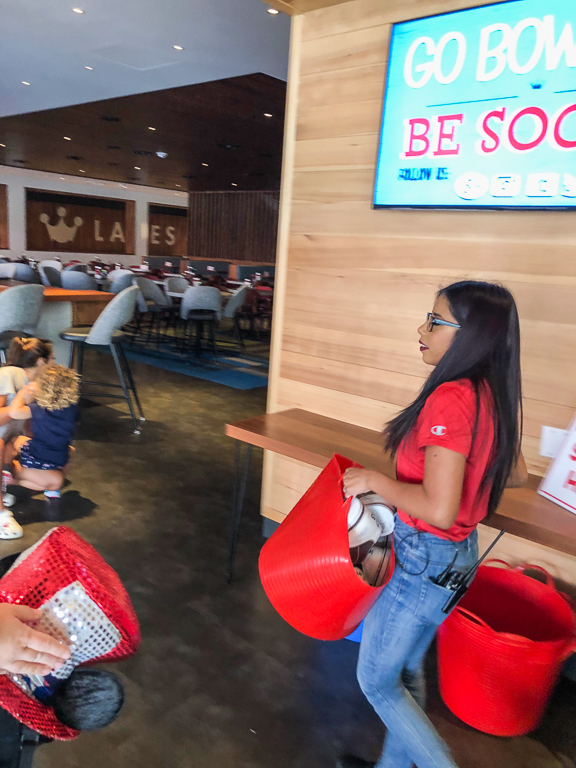 Rental shoes are included in the $10 price and the kids were happy to have shoes in their size. 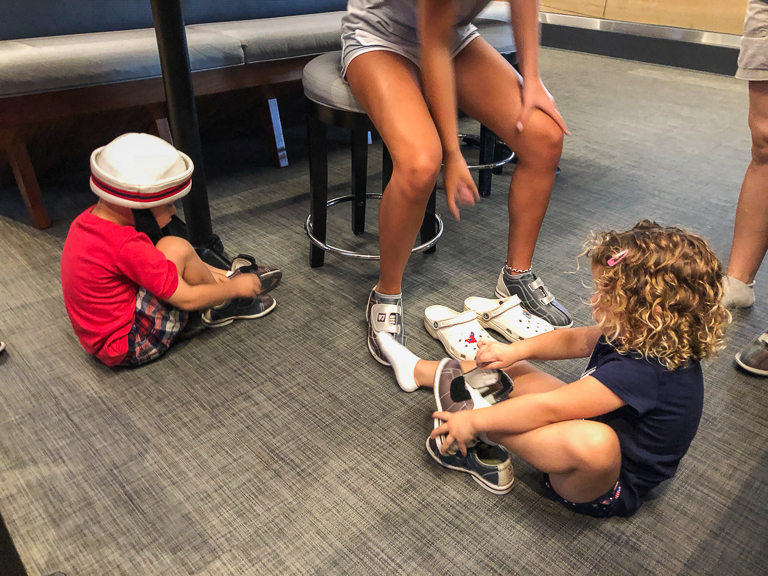 Already waiting for us at the lanes were over a dozen balls. They're all color coded by weight, I think from 6 pounds up to 15 pounds. They're also labeled for finger size, S/M/L/XL. 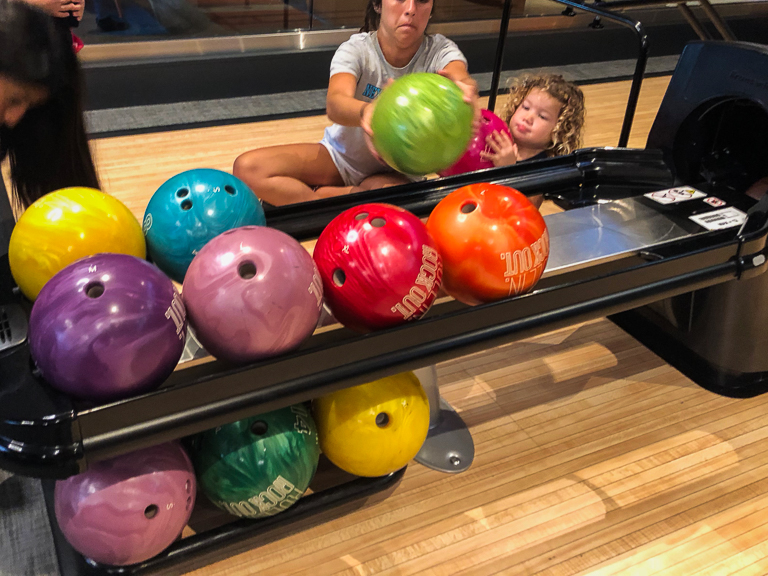 Ian and Alli were both happy to find a ball in their favorite color with characters on them. Alli just had to have the pink one. 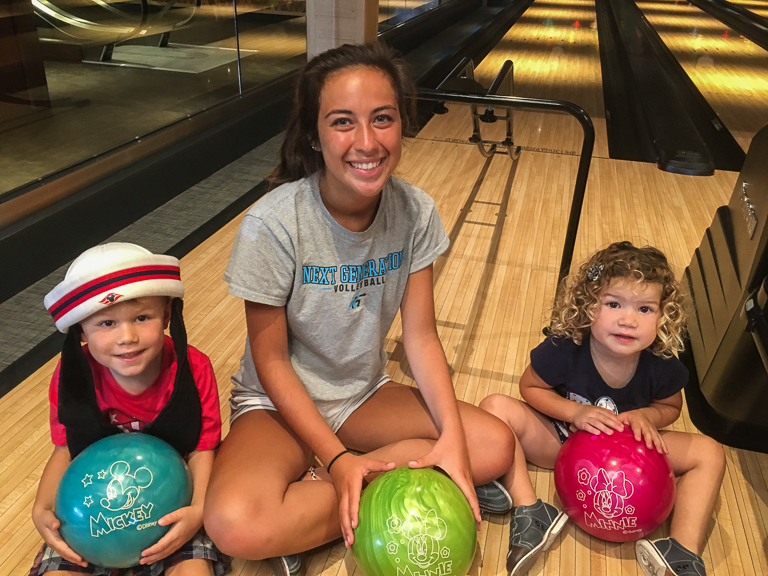 I'm sure it's standard at this point, but we were happy they had a ball ramp for the kids. 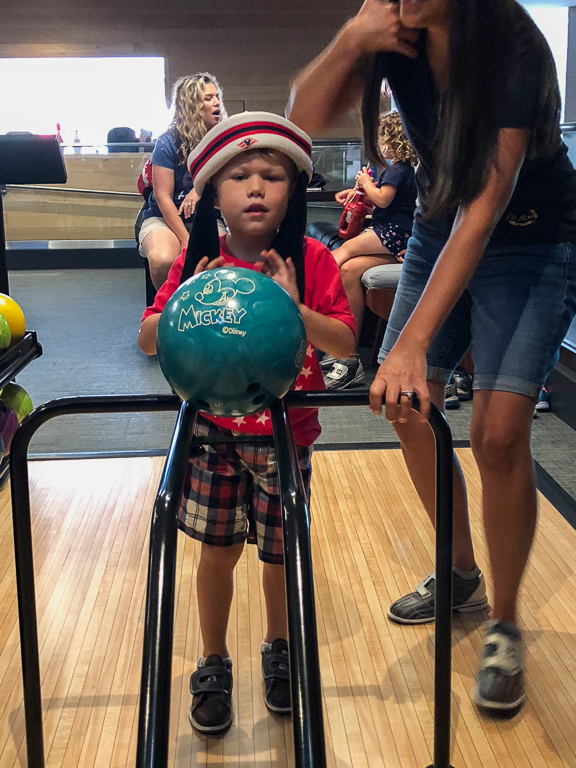 As well as bumpers. 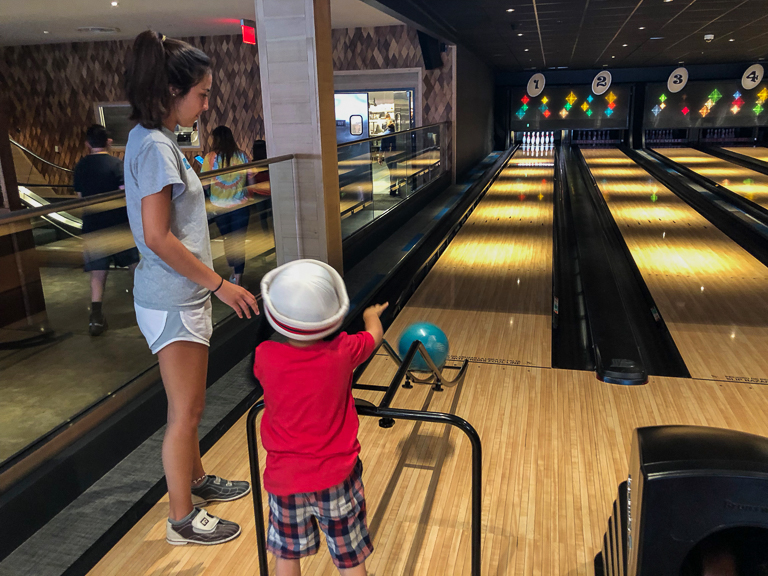 Alli was very insistent on doing everything all by herself. Picking up her own ball from the ball return, loading it on the ramp, and pushing it down. 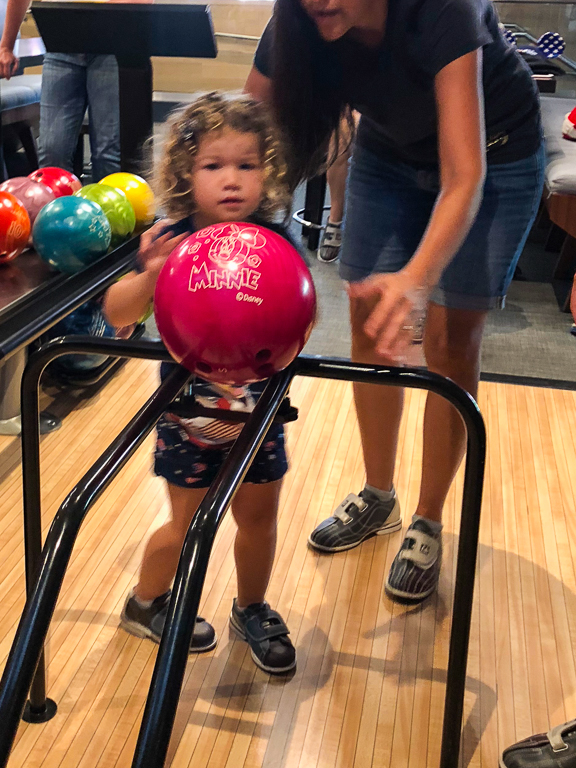 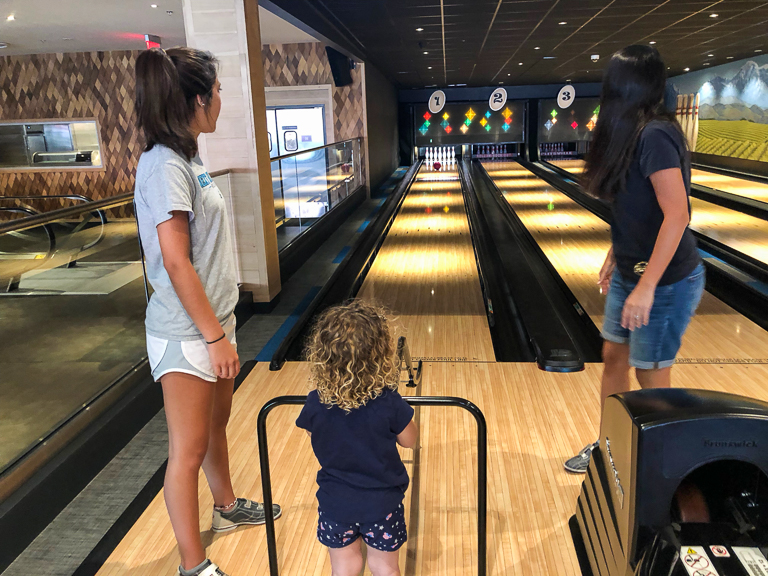 Excitedly jumping up and down after knocking down the pins. Times like this make me wish I brought my DLSR. The phone just can't catch these fast motions without blurring. 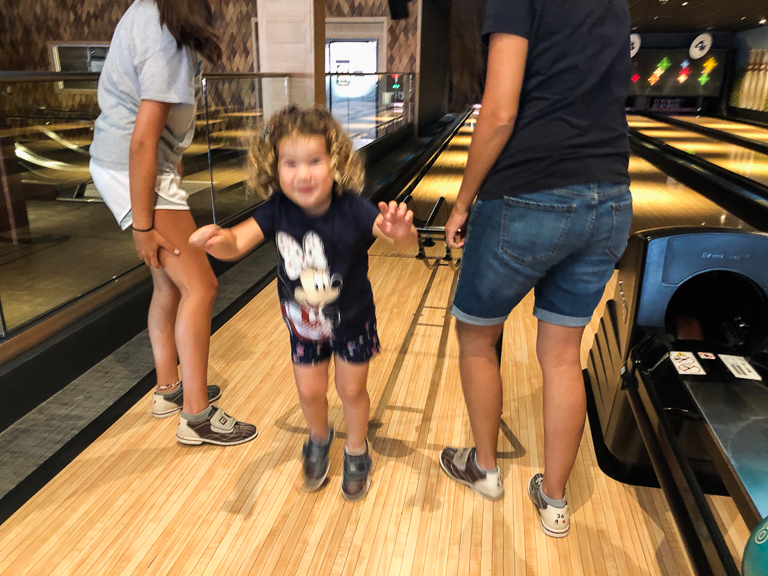 As far as food goes, we received menus shortly after arriving. The food prices are high, just like you'd expect from their bowling prices. $18 for a burger and fries, $24 for a taco bowl, $18 Macho Nachos, etc. Our server visited us very frequently asking if we wanted something. 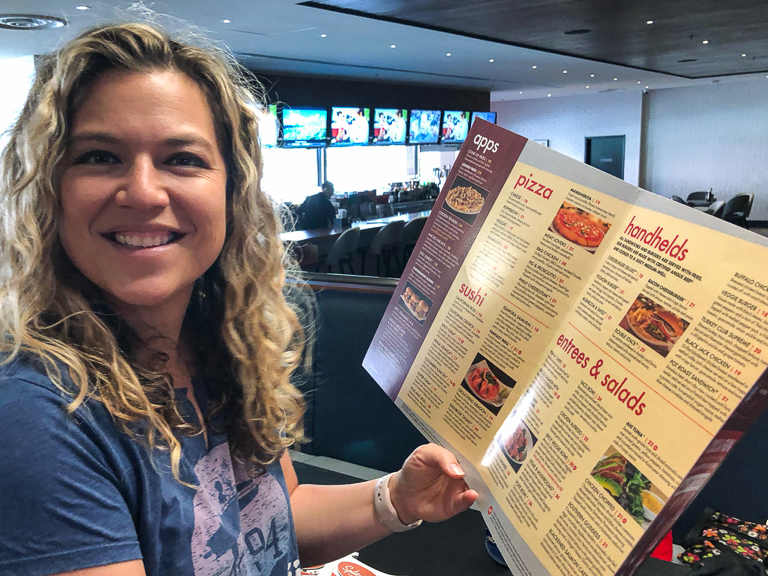 In the end, instead of food, we ordered the kids a couple bowling pins filled with Icees ($12.75 each). 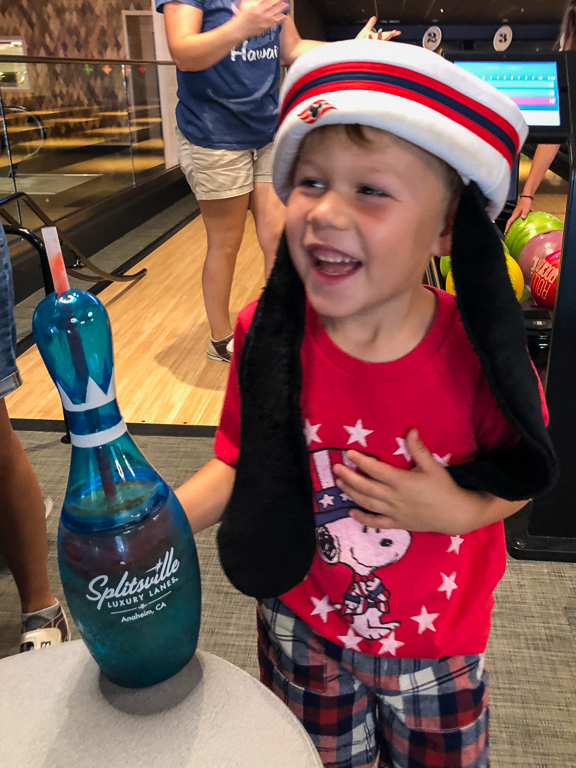 Happy to have a pink pin. 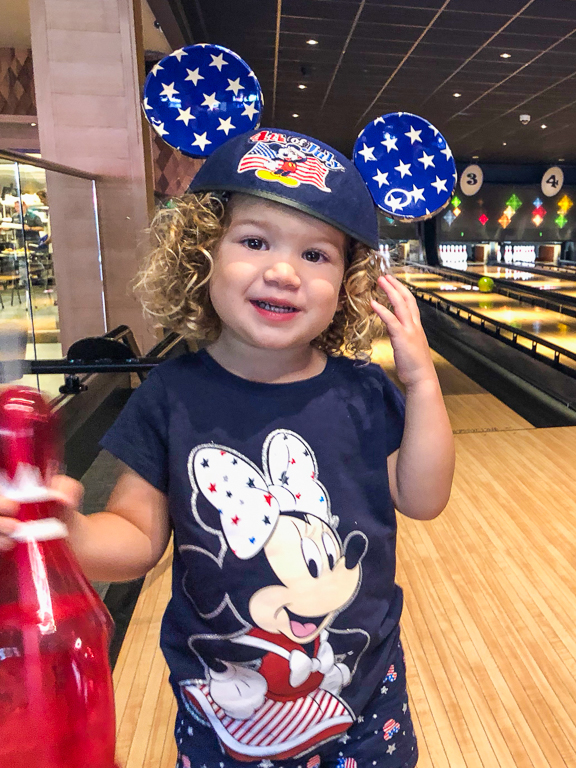 The bowling experience itself was just alright. As we were walking up to the lane, I was asking T if the lane looked short. Maybe not the lane itself, but definitely the approach area is shortened than what I'm used to. There's only one row of dots to line up on, and they're all the way at the back. When I lined up, my heels were on the transition from wood to carpet. We only had 6 people there and it still felt crowded. 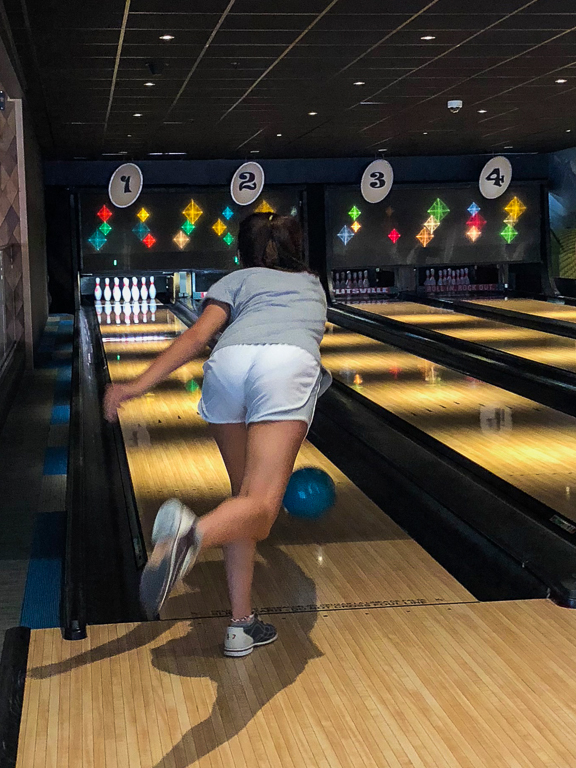 The other strange thing going on with the lanes happened whenever the kids would bowl. The kids would push the ball down the ramp, it would go straight down the entire lane, until just a few feet from the pins when it would suddenly veer to the left or right. Odd.

Everyone had a good time bowling. T had one of her best games ever, bowling a 157. Pretty decent for a casual bowler I'd say. 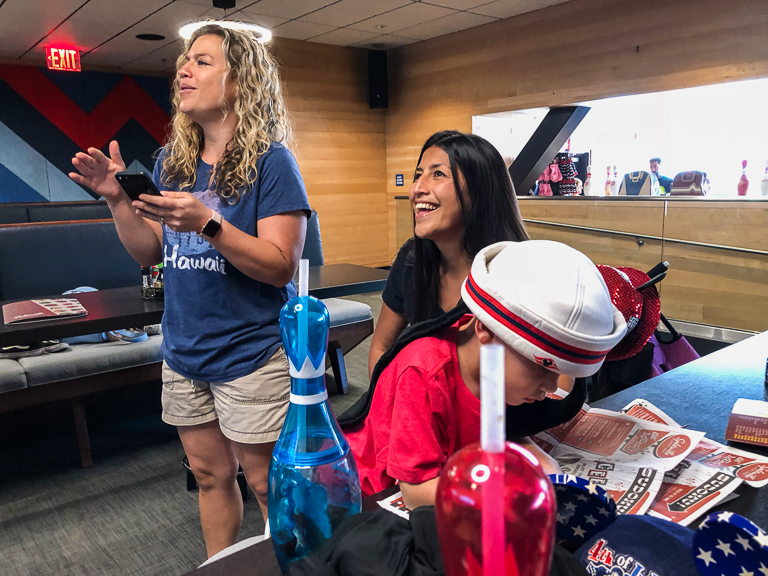 The total time you get on the lane depends on your party size. For 6 people, you get 1.5 hours. In that time, we were able to bowl about 1.5 games without trying to rush. For $10 each, I'd say that's a pretty good value at Disneyland.

Regarding hats, I know we're a few days early for the 4th of July, but I don't think we'll get back to the parks again before then.
I'm sporting an Uncle Sam Mickey hat, which I think it somewhat vintage, but I don't know where it came from. T's Goofy hat came from the Disney Cruise Line. Alli is wearing an old ear hat from Disneyland. Rita's Uncle Sam Mickey hat is from Disneyland Paris. And finally Ian's Stars and Stripes Mickey ears hat came from Walt Disney World. Quite the mix of locations today. 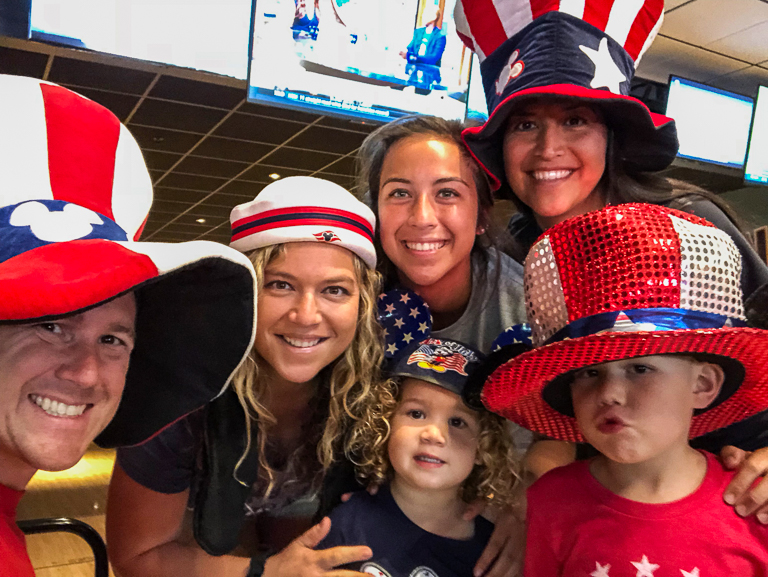 Well it's a beautiful day in sunny California. Splitsville was a fun alternative to spending a day in the park. Afterwards we wandered through the rest of Downtown Disney stopping by Marceline's Confectionary and the newly renovated Disney Store. We'll see what the rest of the weekend has in store for us! 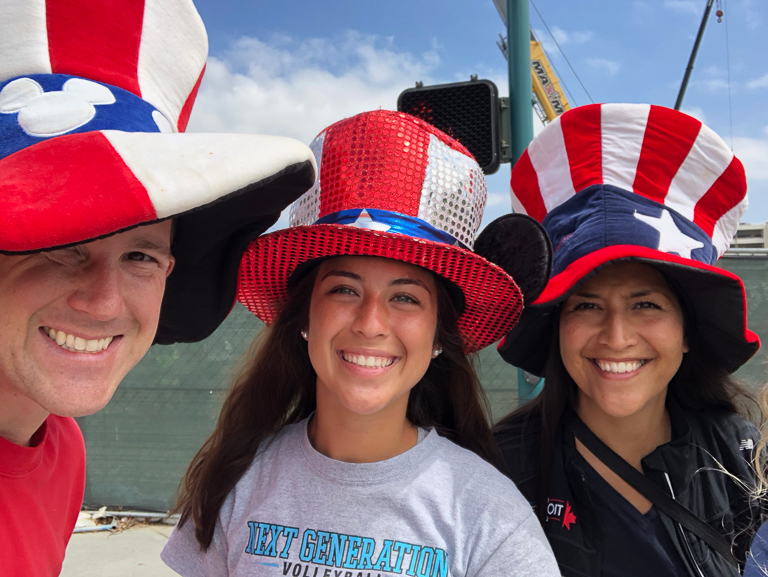