It's our last day at the parks in Florida, and we're rounding out our trip with a visit to the Animal Kingdom. 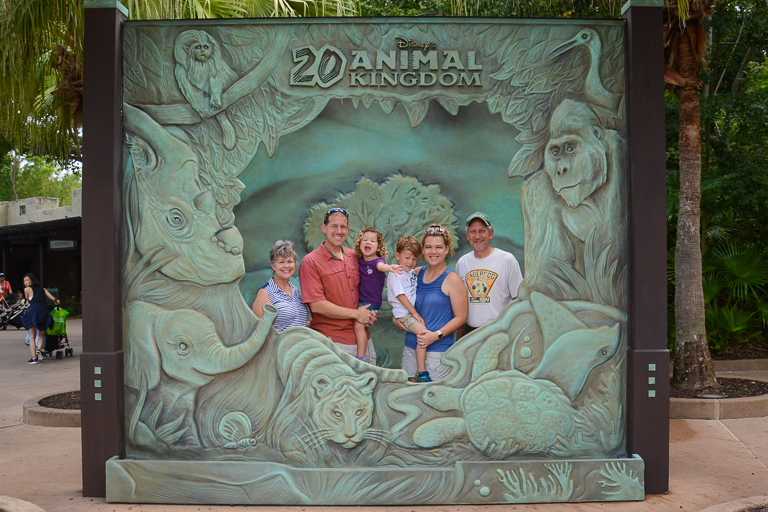 Another late start to our day where we didn't get to the park until 11am. That's worked out fine for us all this trip, but because we're so late, we're in the furthest parking lot you can be in. There won't be any walking to the park for us. We'll be taking the tram in this heat. 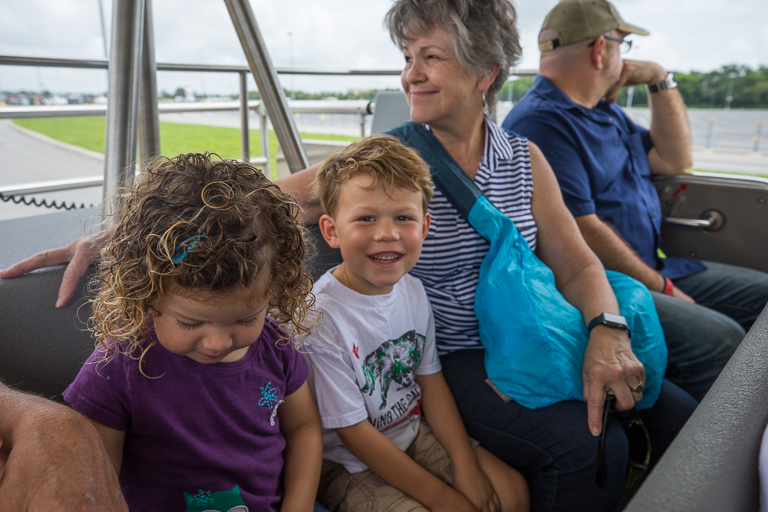 Even before getting to the gate we're encountering the wildlife. A security guard cautioned us to keep some distance because their beaks can be sharp. 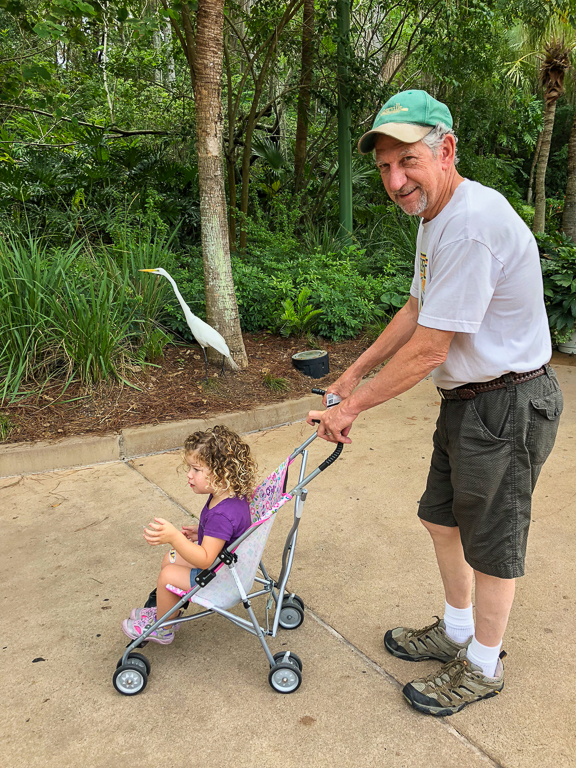 A month ago I had planned out all our fastpasses. It gets a little complicated planning for everyone when not everyone can ride the same things. In order to keep a couple fastpasses for me and Ian later, Theresa and I skipped this next one and sent the kids with my parents. 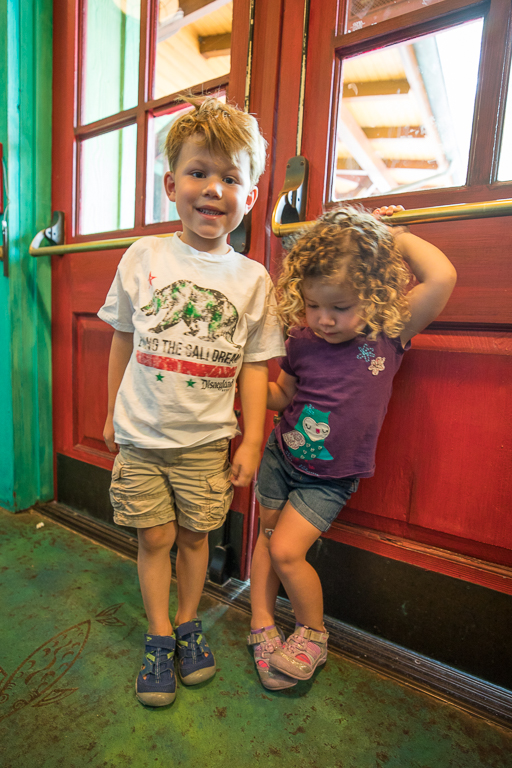 Where everyone got to meet Minnie and Mickey! 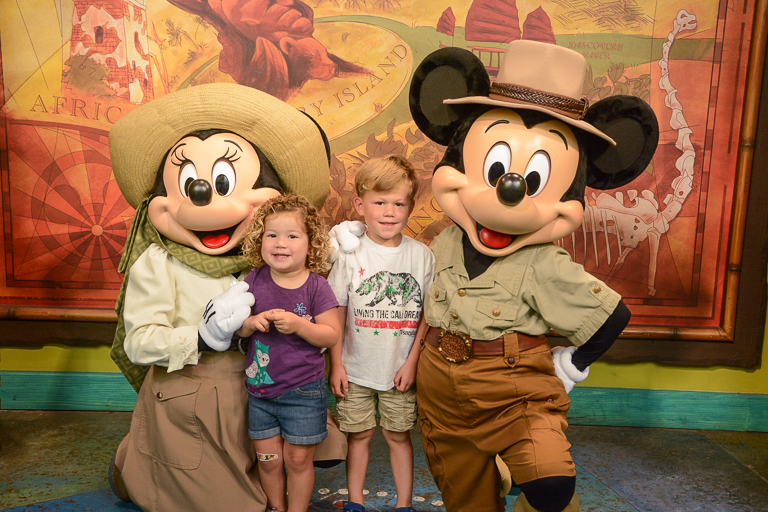 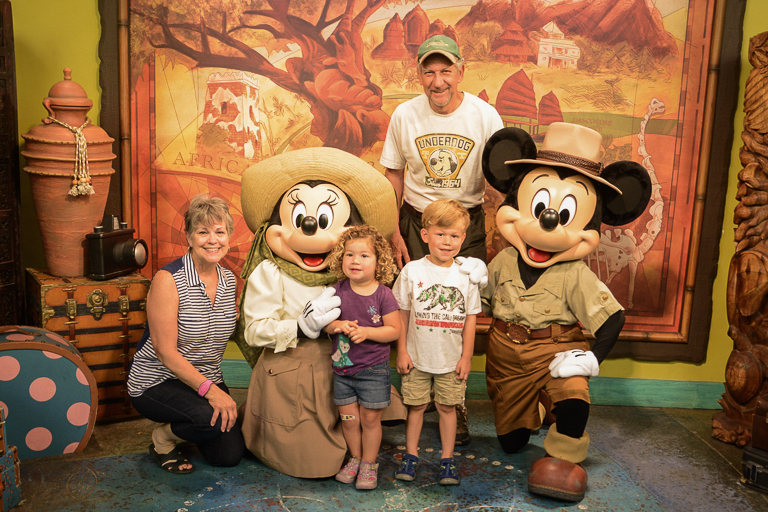 This is what I was saving those fastpasses for. The Kali River Rapids! Ever since he's turned 42" and become tall enough for the Grizzly River Rapids back home, he's wanted to go on this one. And surprisingly I haven't even been on this ride either. The theming in the line was fantastic! And I was really happy I wasn't in that 80 minute standby line. 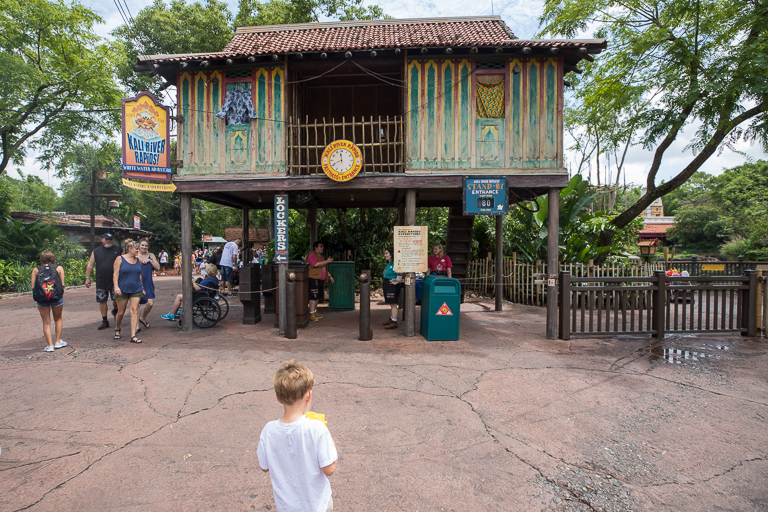 These ponchos have come in really handy this whole vacation. 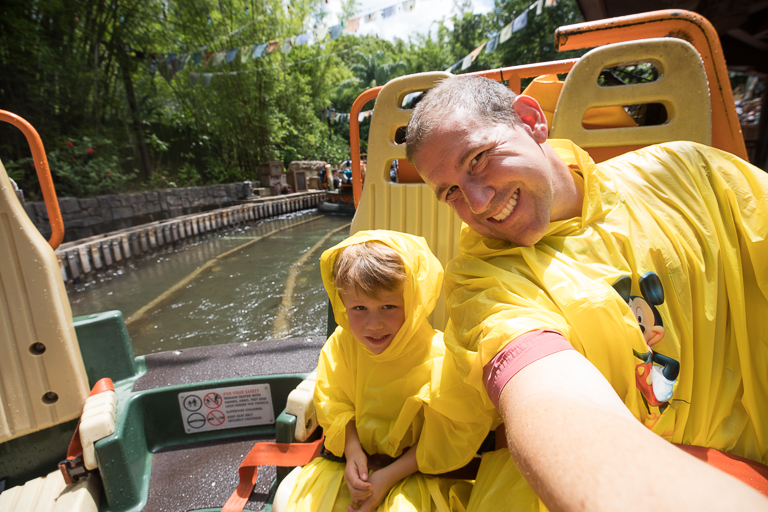 We hopped on the boat, went up the lift hill and 3:30 minutes later were back at the docks. That was it? That was so short! Now I'm extra glad I didn't wait in that 80 minute line. 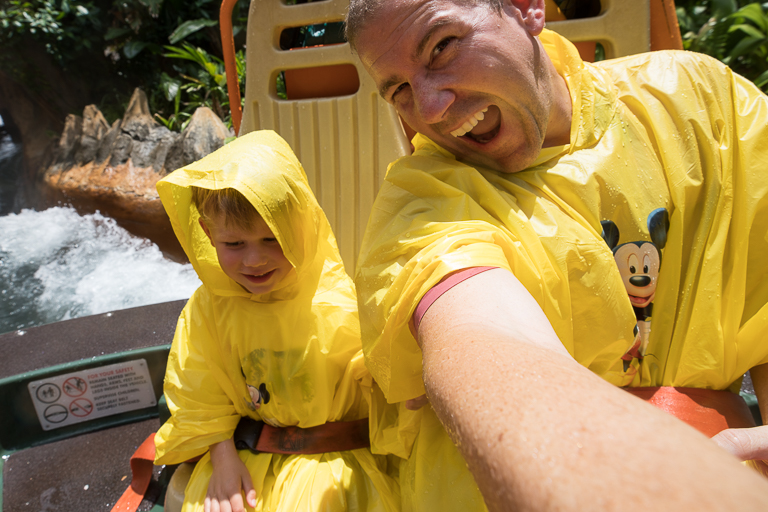 While Ian and I were riding the rapids, Alli and the rest of the family were back in Dinoland enjoying the TriceraTop Spin. 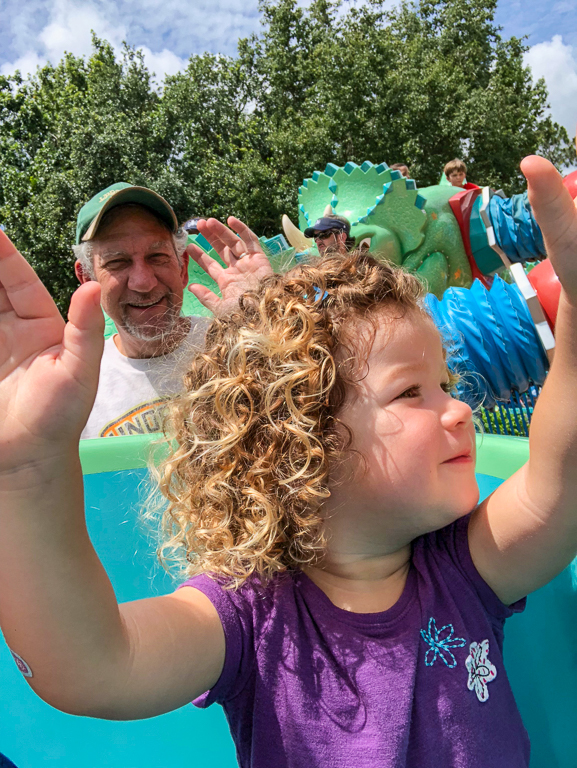 Next everyone met up to go on the best ride in the park (and yes, I've ridden the Avatar Flight of Passage ride). With the Kilimanjaro Safaris you never know exactly what you're going to encounter. In past rides I've had giraffes sticking their heads next to the bus, and rhinos walking right beside us. Aww. A baby hippo. And a buzzard who is "just checking". 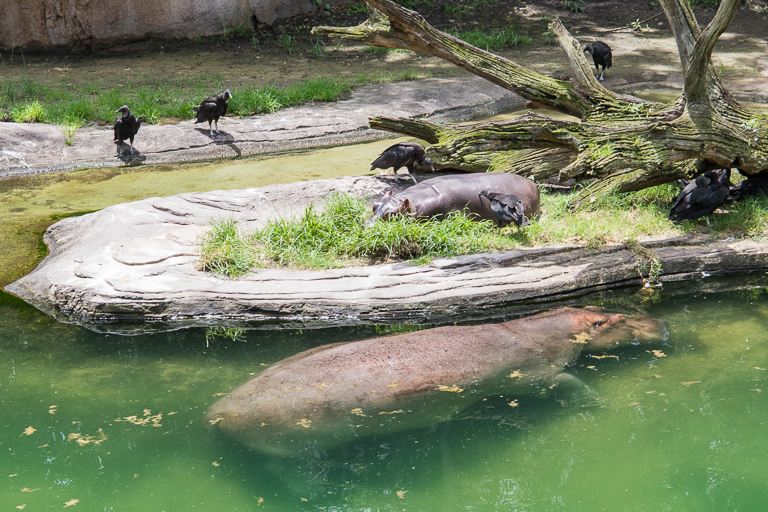 Ian was excited to learn that we'd be seeing some crocodiles on our trip. 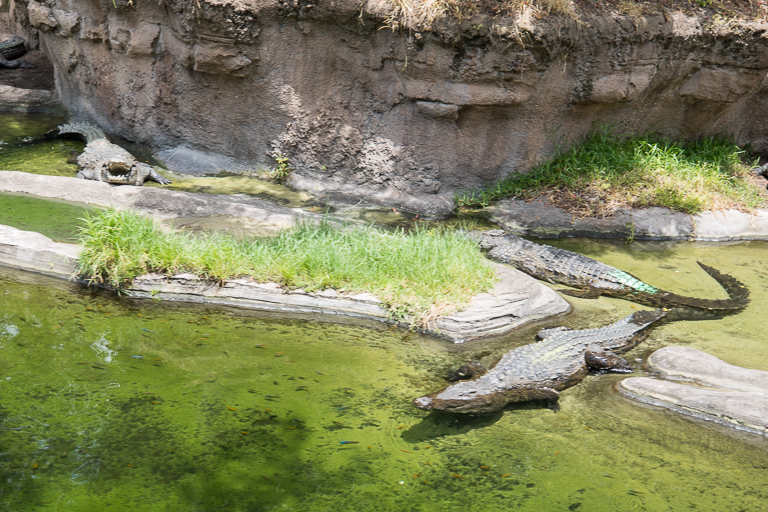 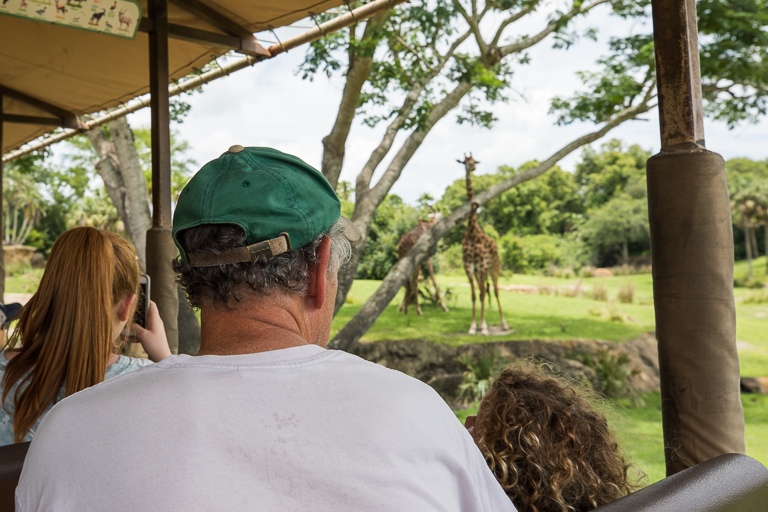 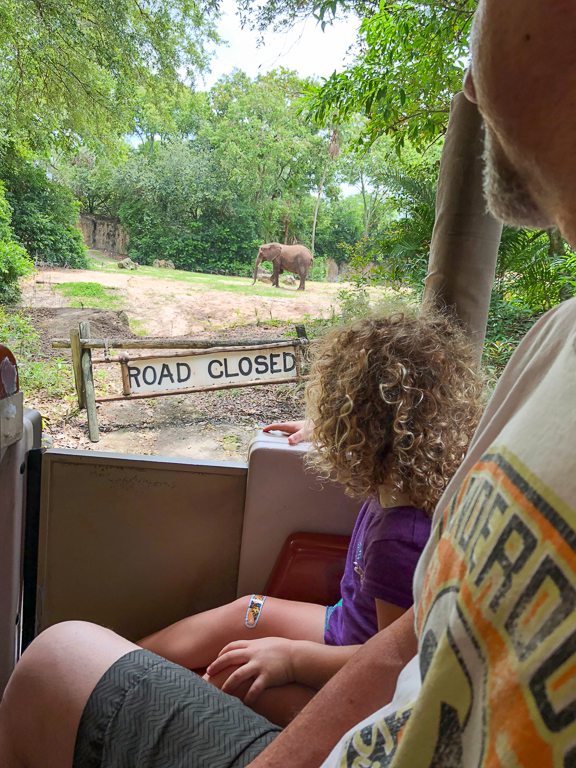 This guy seemed to be out of his enclosure. He was hanging out on the hillside embankment beside the elephant section. 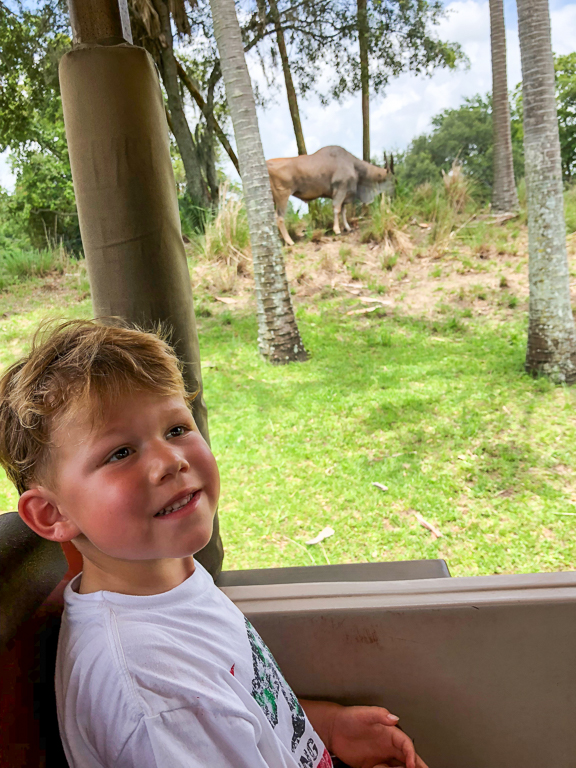 To beat the heat, we're treating ourselves to a frozen treat. 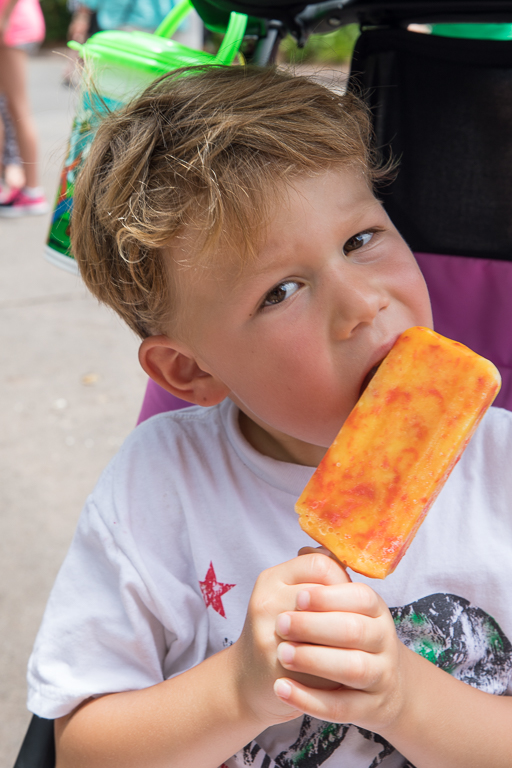 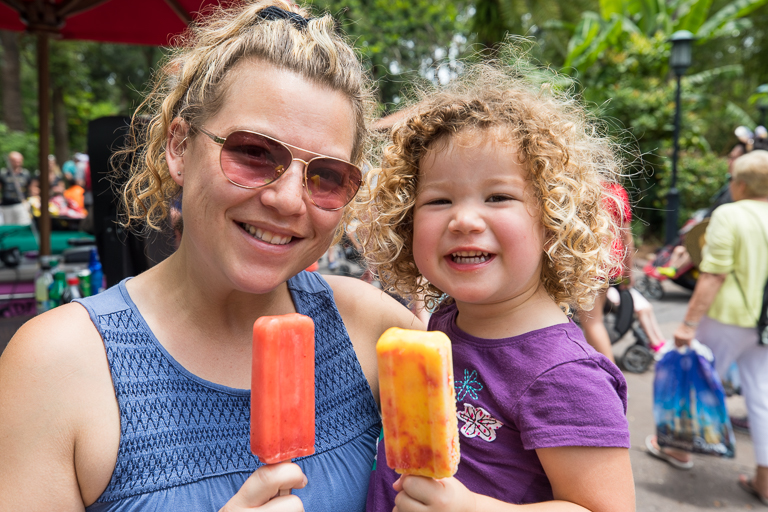 Back at Disneyland, it's Tough to be a Bug ran until March 2018. It's one of those rides that T and I had been on many times before, but never took the kids. There's some intense parts that could be a bit scary for the little ones. We made sure to sit far away from where Hopper comes out, and gave the kids the choice whether they wanted to look or not when the spiders and hornets attack. I think Ian liked it. Alli not so much. 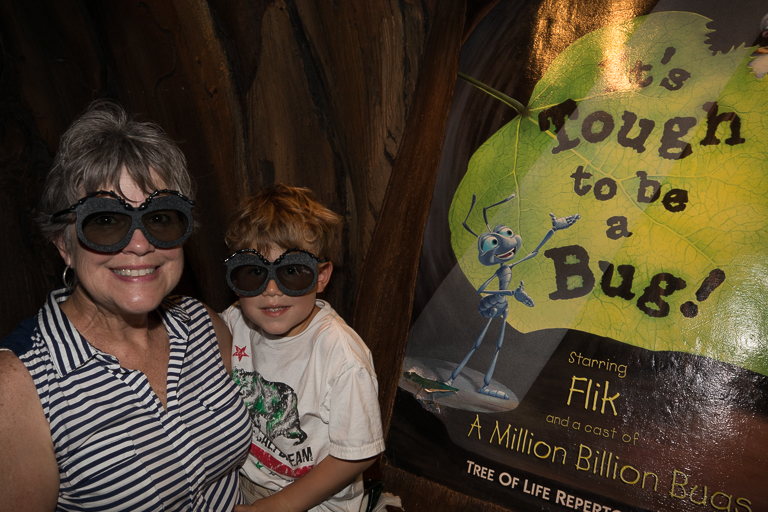 Our meals this trip have been fantastic. Day 1 was Le Celier, Day 2 The Plaza. Today might be the best one yet. I remember being impressed by the Yak and Yeti years ago. Now I get to try it again!
That's a good start! I've been to quite a few korean restaurants and I can't say I've ever seen fried chicken and waffle being offered. 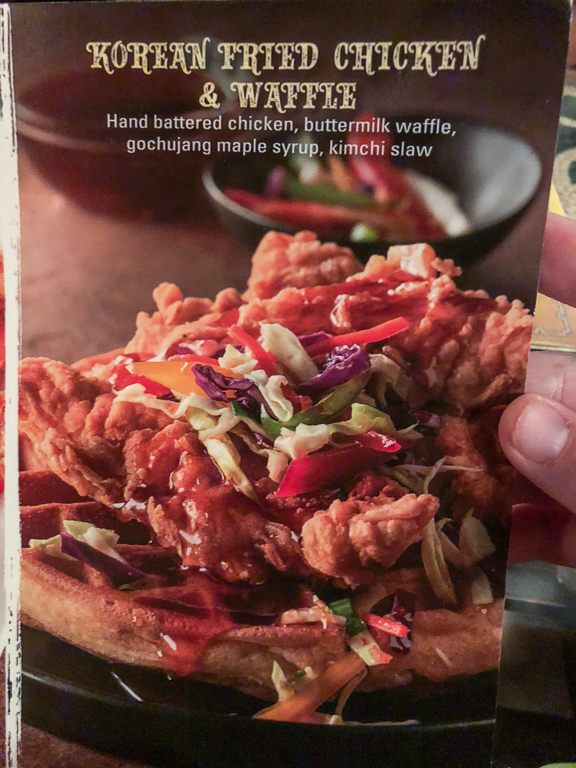 But it's one of my favorites, so of course I ordered it. And I didn't regret it. It was delicious!
The rest of the table enjoyed theirs also. Chicken Tikka Masala was great! The Kobe Burger was fantastic. And after having enjoyed an order of the crispy green beans, I ordered a 2nd plate of them. They were that good! 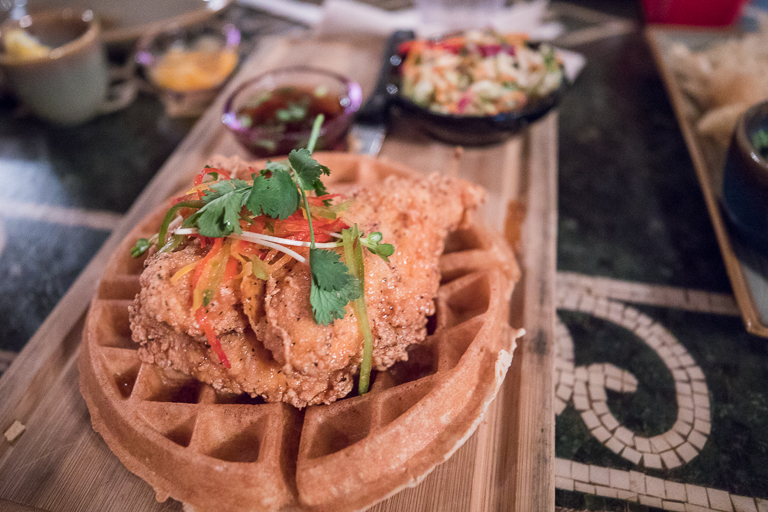 Having used all our fastpasses, we were allowed to make more. Another round on the Kilimanjaro Safari! 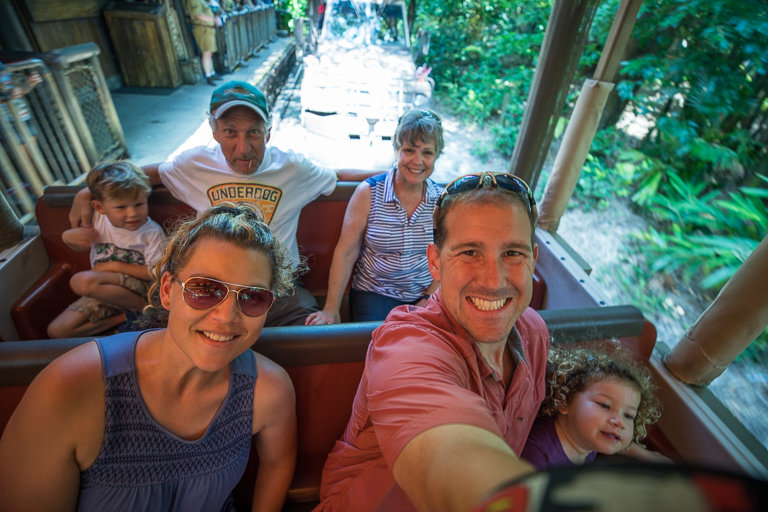 Alli snagging a spot on the side to get a better view. 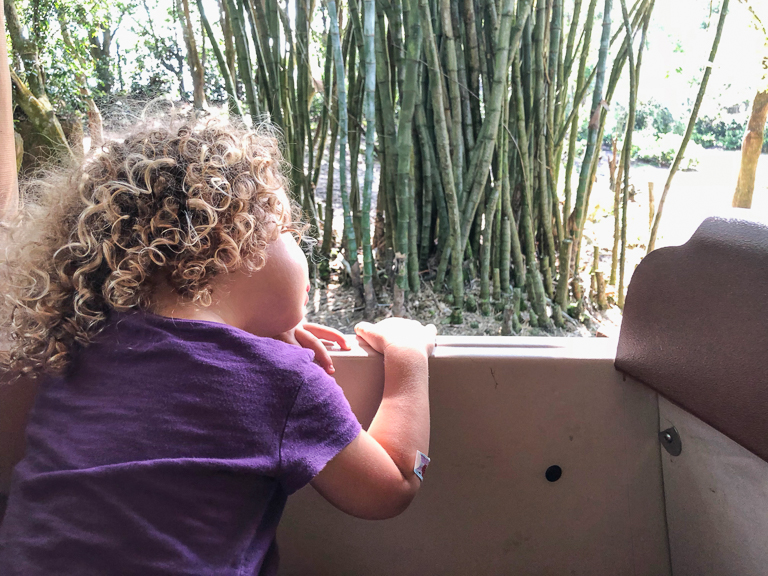 Pop Pop was brave allowing Ian to use his phone to take pictures. 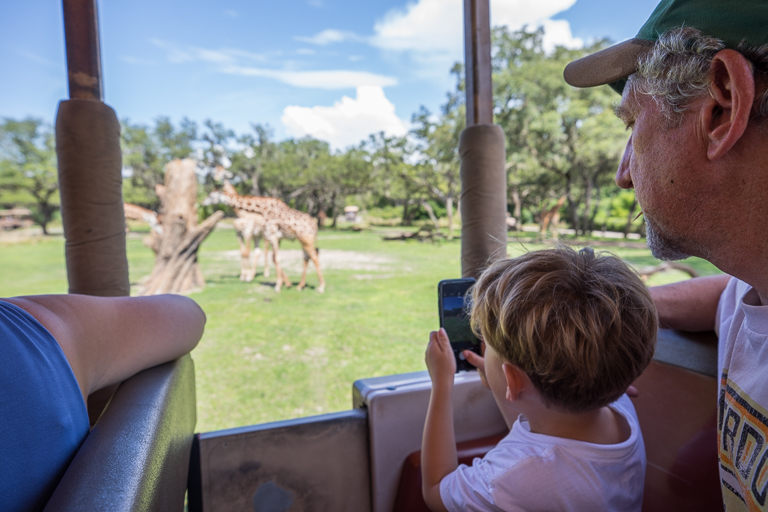 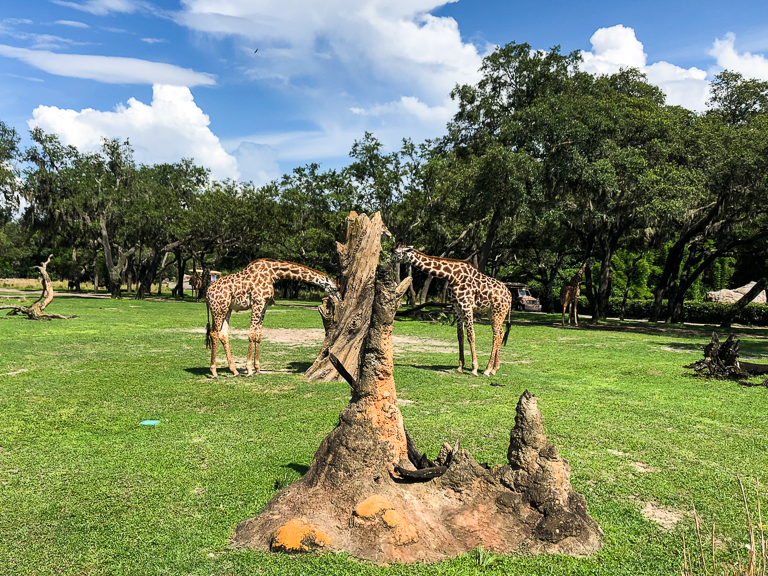 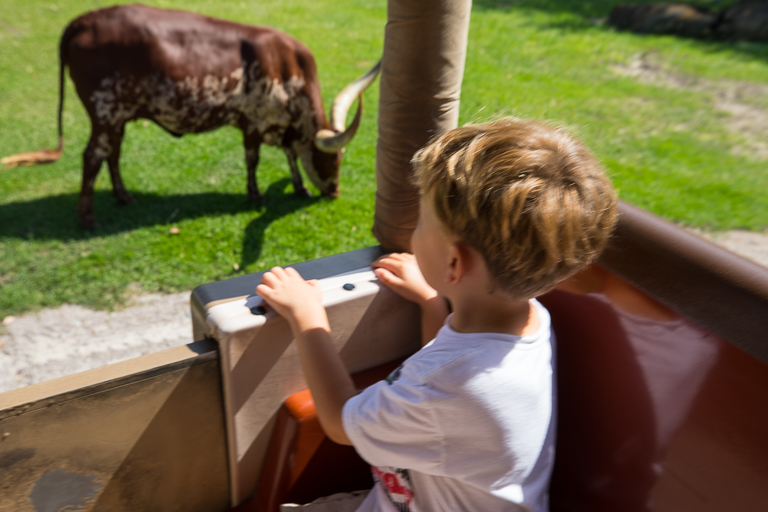 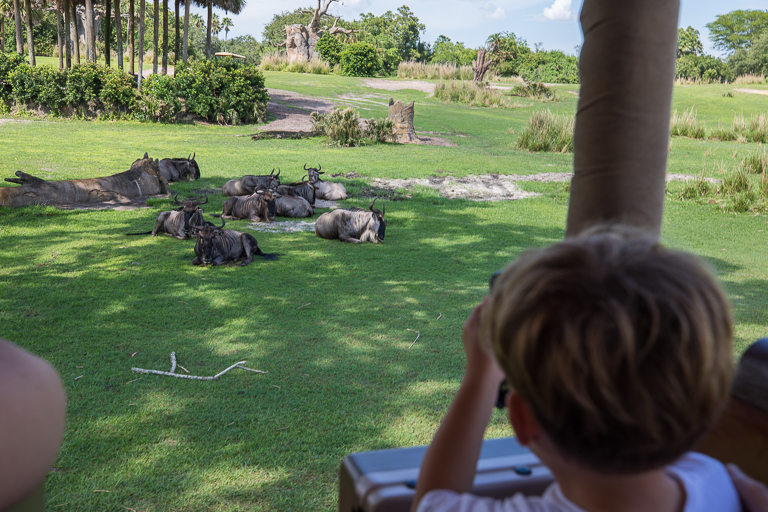 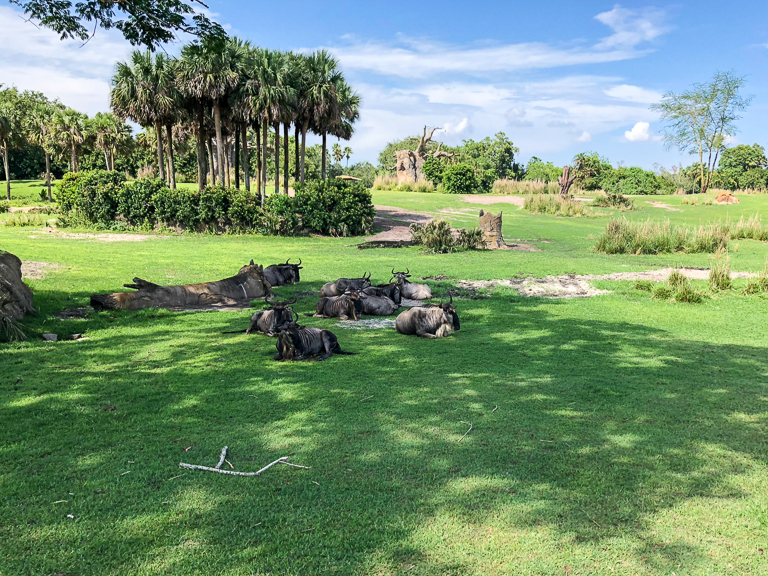 Before we go we've got to get a photo in front of the Tree of Life. 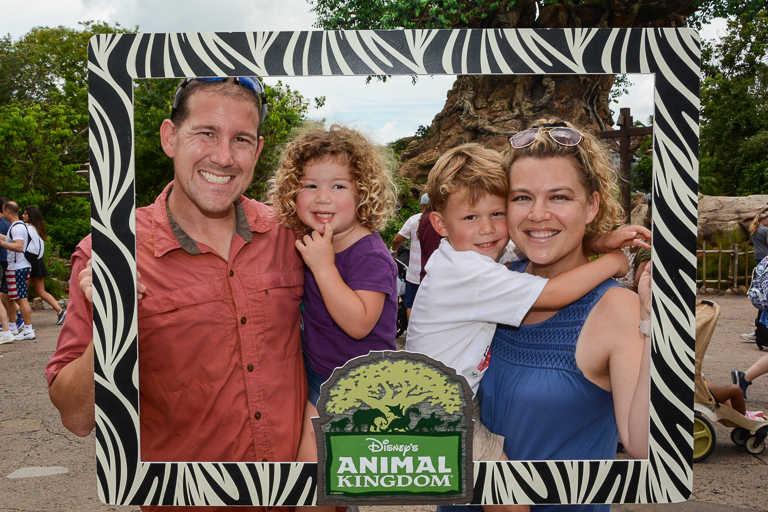 I love how even the kids got into this one. 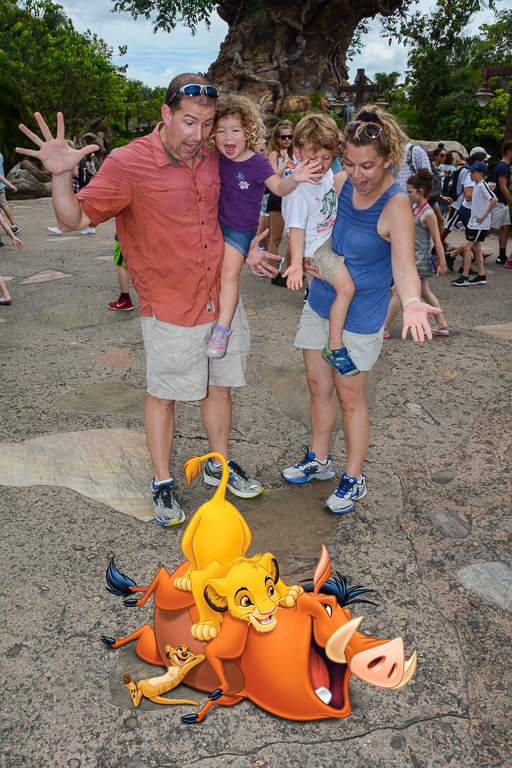 Half the day is over, but we've still got some time. Off to another park!
Posted by Joe at 10:30 AM