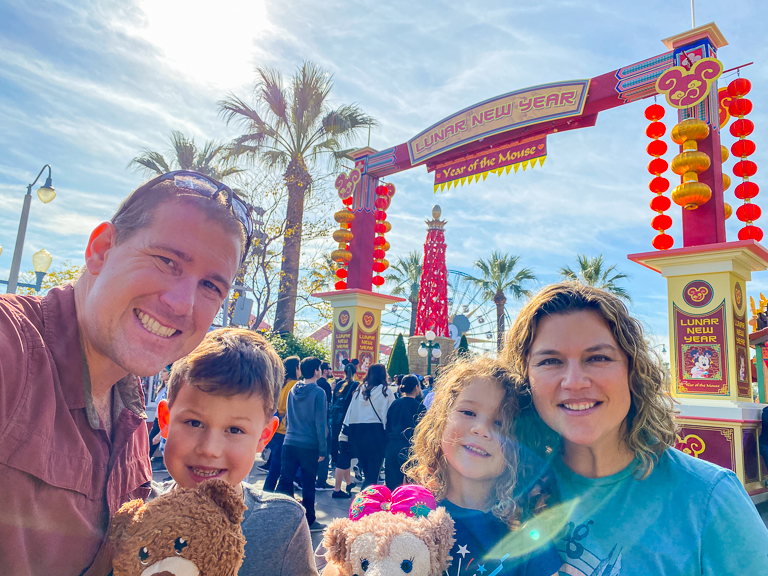 I've been following along with the madness that has followed the Rise of the Resistance opening since January 17th. Every morning, tons of people have entered the park hoping to get a decent boarding group. Boarding groups fill up for the entire day within minutes, but the crowds don't go away. Because of that, Theresa and I had planned to spend the day at California Adventure.
But once we arrived at 9:30am the line to get into California Adventure is pushing halfway across the esplanade.

While the line to Disneyland is nearly a walk-in. It would have taken at least 20 minutes to get into DCA, so I guess we'll start in Disneyland. 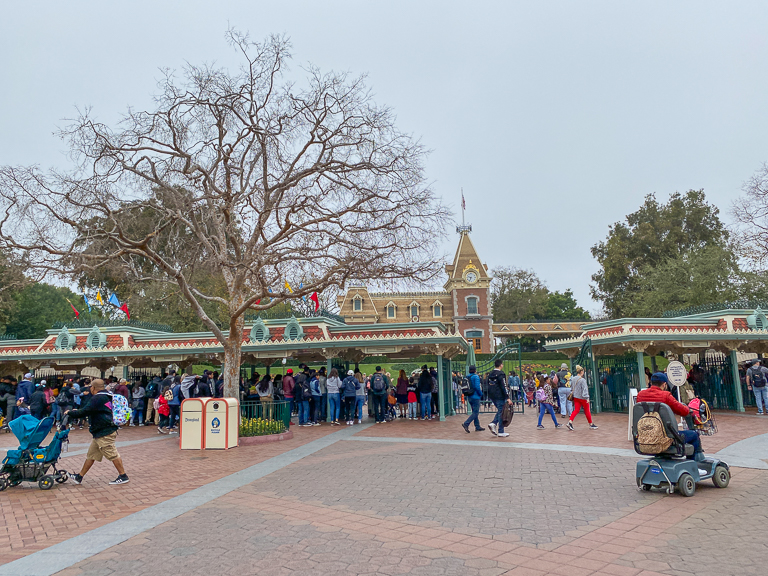 Today I'm hoping to make good use of fastpasses. And luck was with us. While Buzz Lightyear showed a 35 minute standby line, Theresa was able to pull a fastpass with an almost immediate boarding time.
Oh and I should introduce our two extra companions for the day. For Ian's school, every week a student is chosen to bring home Brown Bear. He comes with you where ever you go and the student draws pictures and tells the class about the fun things Brown Bear got to do.
Alli has brought Shellie Mae, who she has dressed in the clothes we got her on our trip to Shanghai Disneyland. Shellie Mae is ready for Lunar New Year too! 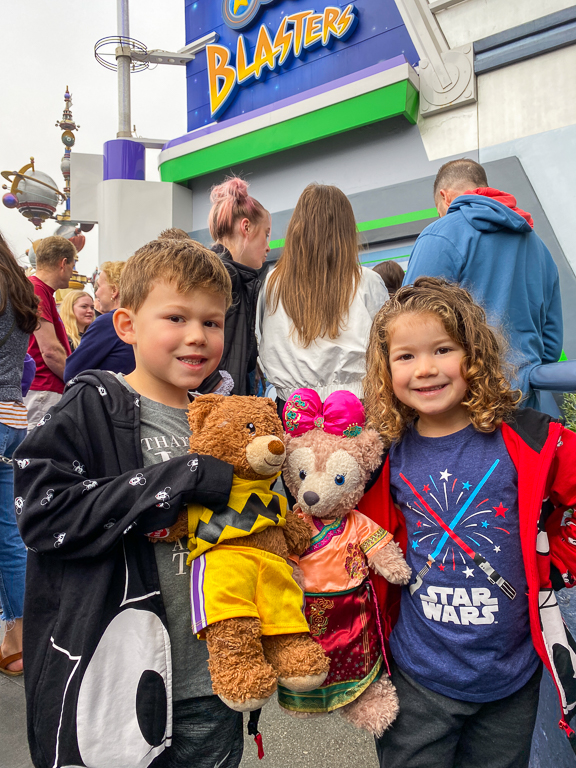 The lines today are getting a bit ridiculous already. Twenty minutes or more for everything in Fantasyland. it's a small world is 40 minutes. The kids love running around Goofy's house, so we spent some time here while waiting for our next fastpass time to arrive. 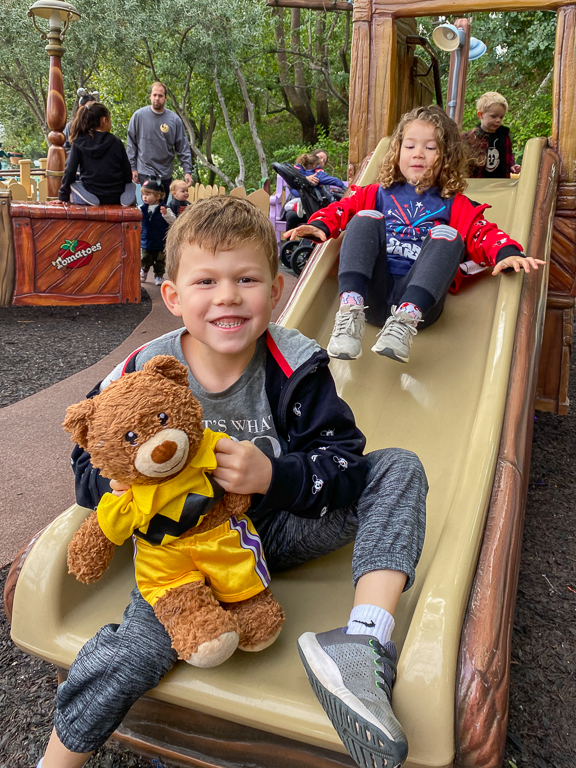 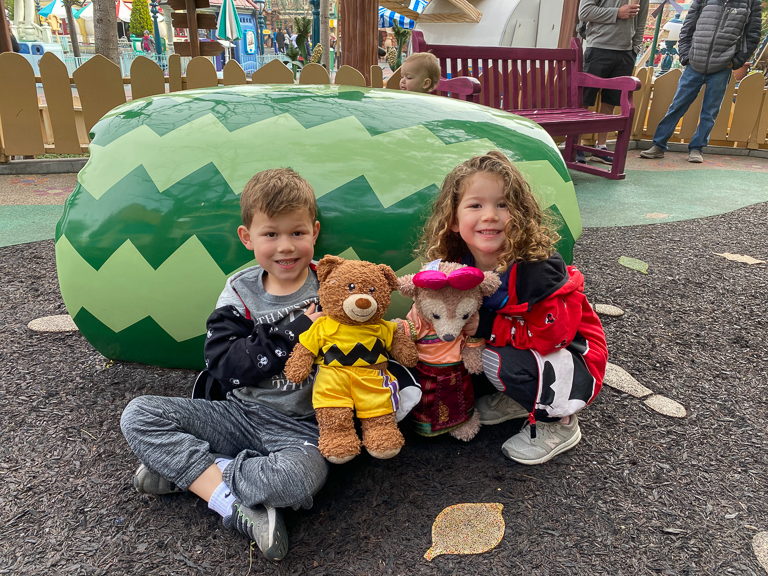 We're in Goofy's garden, so I think a quick cucumber snack for the kids and the bears is appropriate. 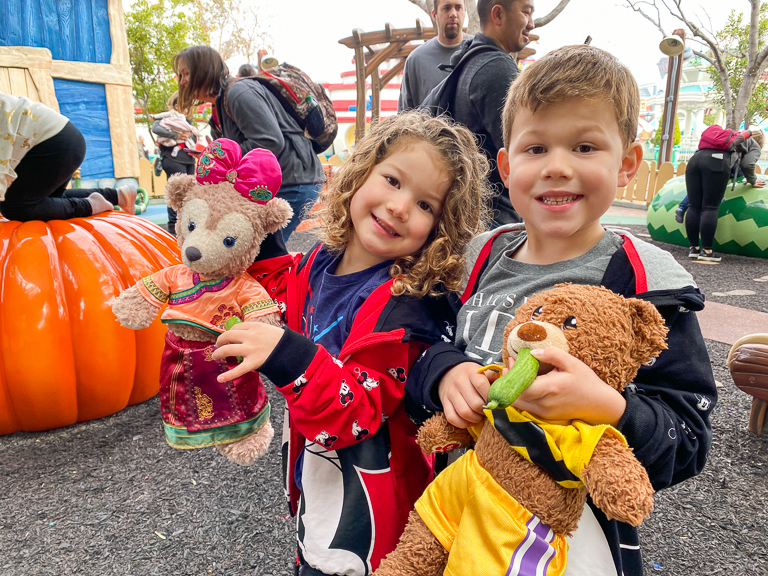 Brown Bear has to get a picture in front of the castle, doesn't he? 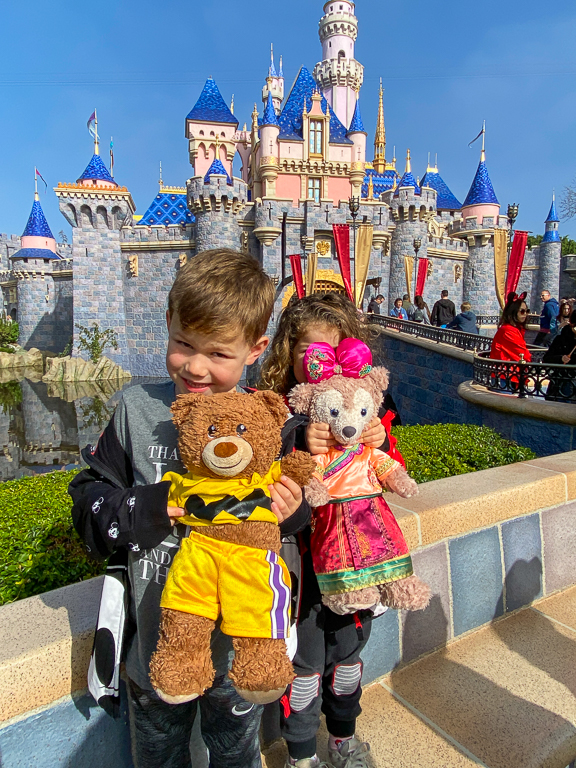 Sixty minutes to wait for Big Thunder? Not with a fastpass! 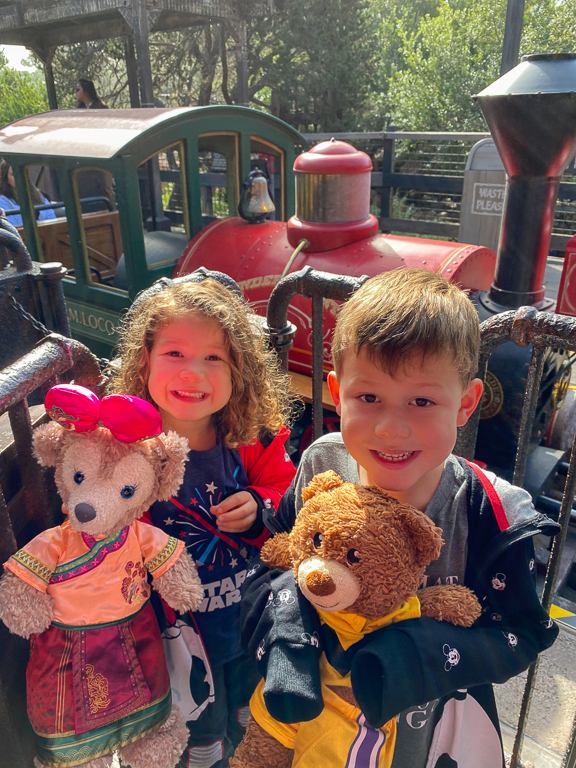 Today Brown Bear is going to get to go on a lot of fun rides. Only one ride on Big Thunder today. Not eight times like our last visit. 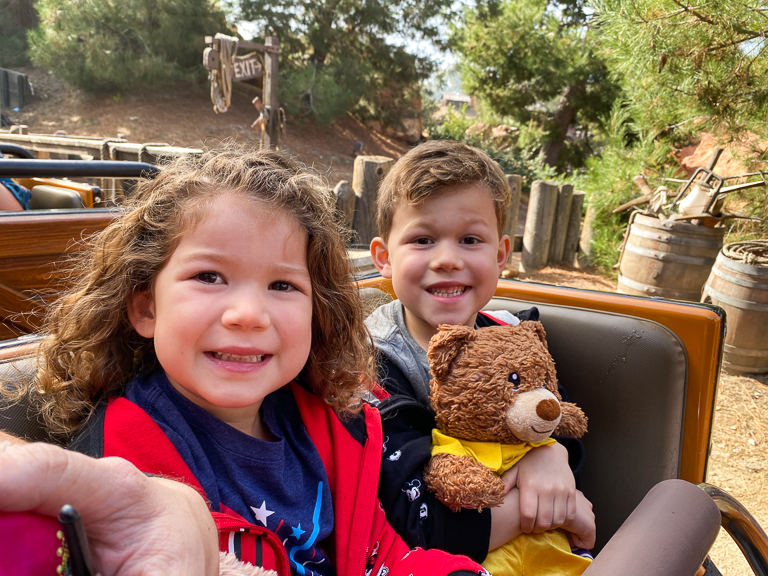 Continuing our good fortune with fastpasses, Star Tours was next up for us. 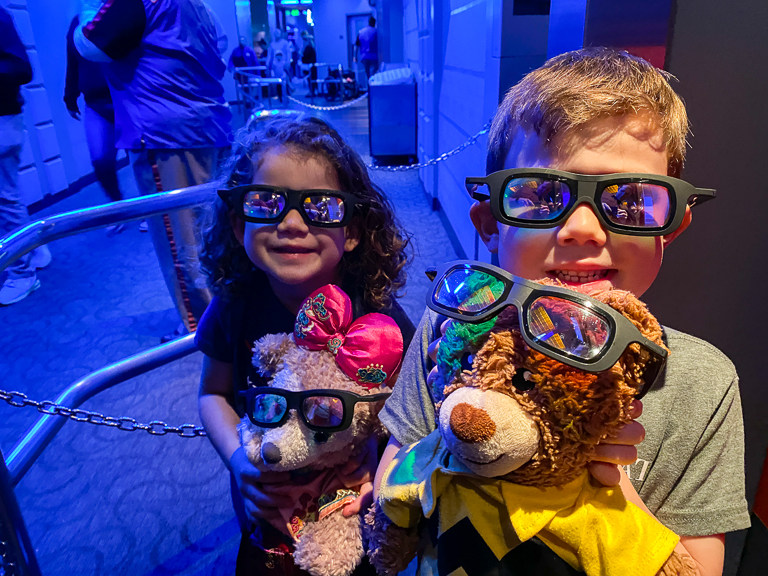 Ian is keeping his passenger safe. 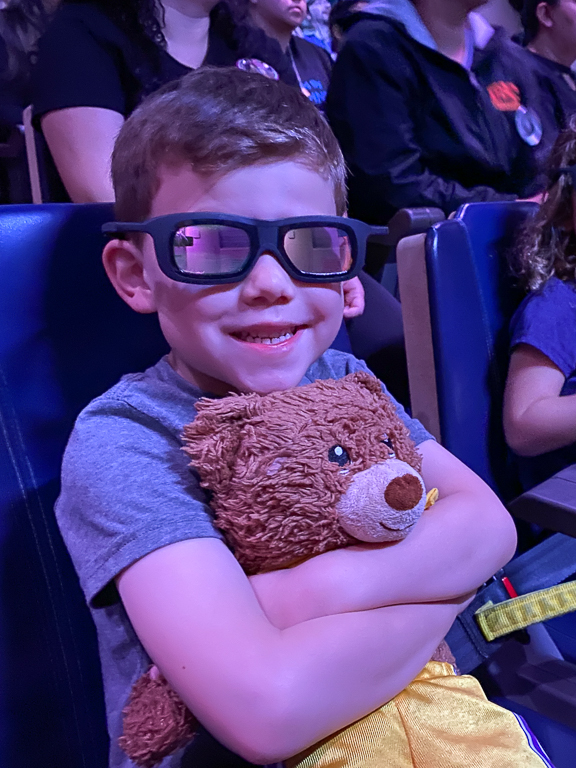 By this point, the madness over at DCA has died down a little. There's still longer lines than Disneyland, but at least it's moving. I think it's because everyone is here to celebrate Lunar New Year over here. 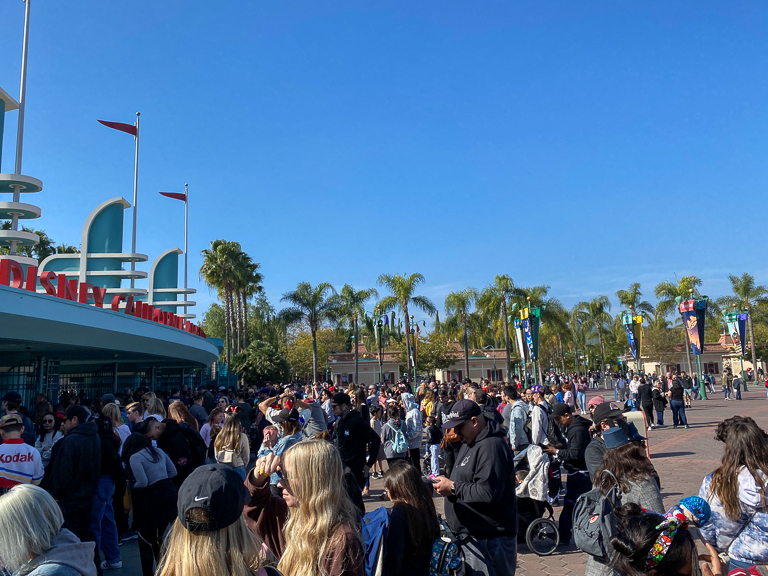 Here in DCA, our fastpass for Toy Story Midway Mania is ready. Ian happened to grab 5 pairs of glasses and he put them all on Brown Bear. Ian, what's Brown Bear going to see through those?
Ian - (counting to himself 3, 6, 9, 12). He's going to see in 15D Daddy!
Way to reason that out buddy. 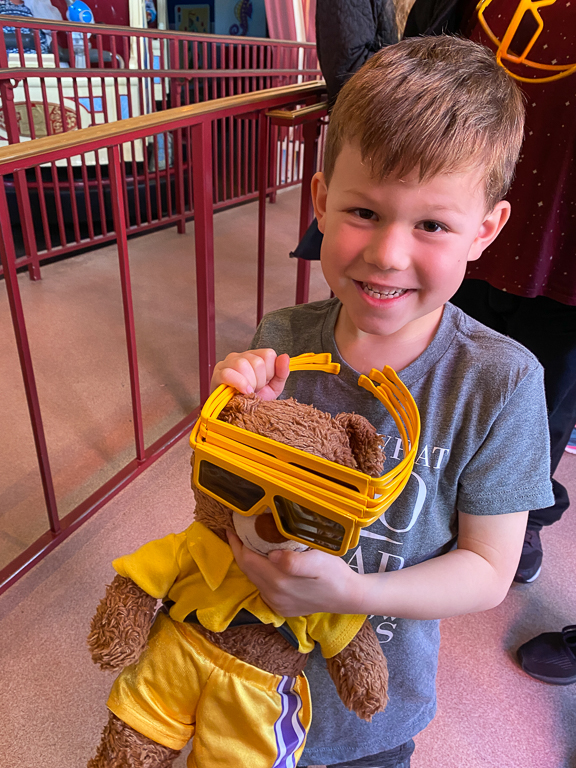 Alli and I teamed up with Shellie Mae. 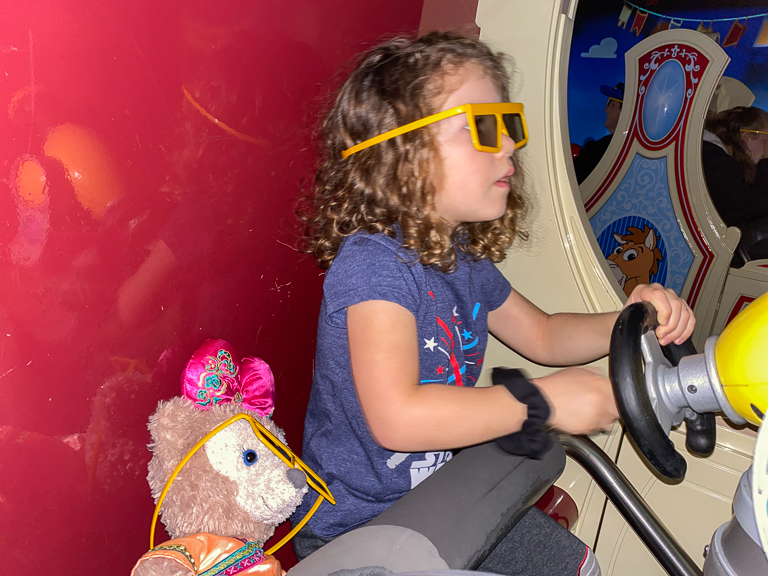 Alli is getting better and better. Nearing that 50k mark. 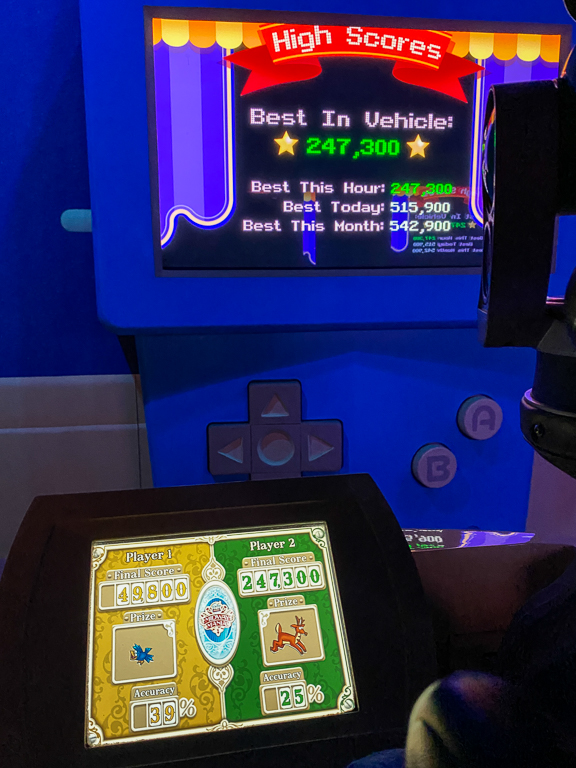 Lunchtime! But say it isn't so! Our usual lunch of a Boudin loaf of bread and butter isn't available! I waited in the regular line to order a bowl of soup, but had them slice the bread bowl. Thankfully the cast member Jane told me that it's temporary. The bakery is under construction right now and I should expect all the regular loaves again sometime around Feb 12th. 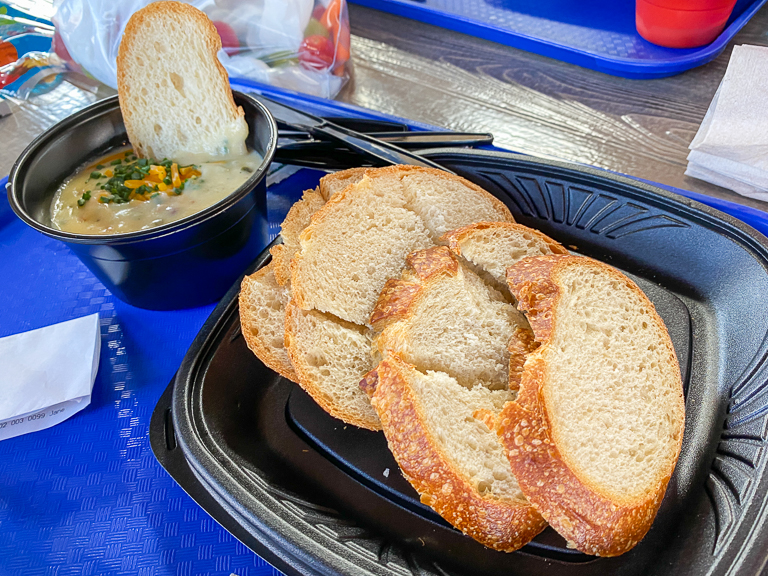 At least there's a little bit of crust left for the ducks, swans, and seagulls. 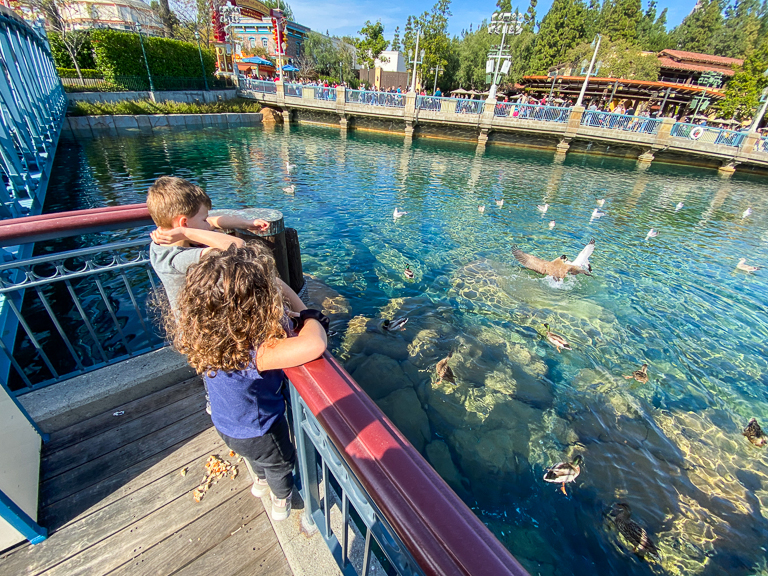 Wait what? Another ride on Toy Story? Yep, Theresa is doing a really good job getting us fastpasses today. Despite there being a 75 minute wait, she was able to snag another FP. She's doing really well today. 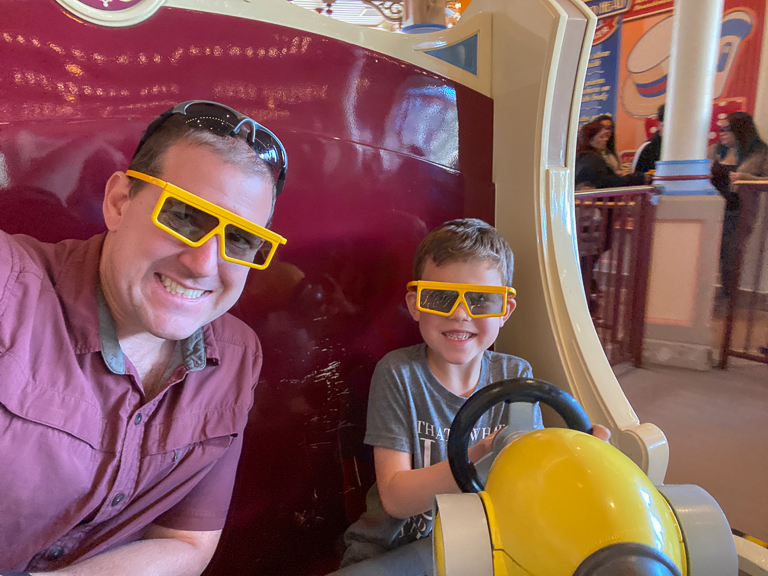 With Ian beside me, we were able to open up so many of the bonus screens. I was so close to cracking 300k. And Ian is doing awesome. He'll hit that 100k mark soon. 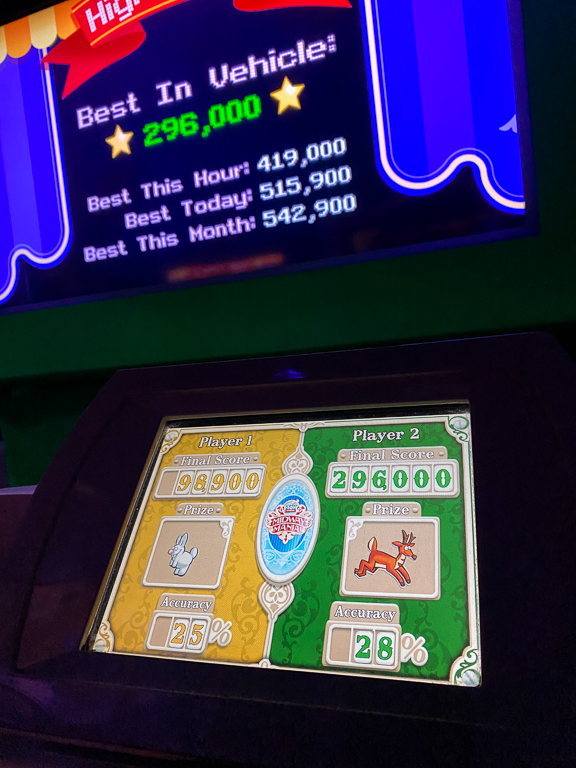 One of the things I was hoping to do on this visit was get a picture with Mickey and Minnie in their New Year clothes. It would look great for our calendar next year. 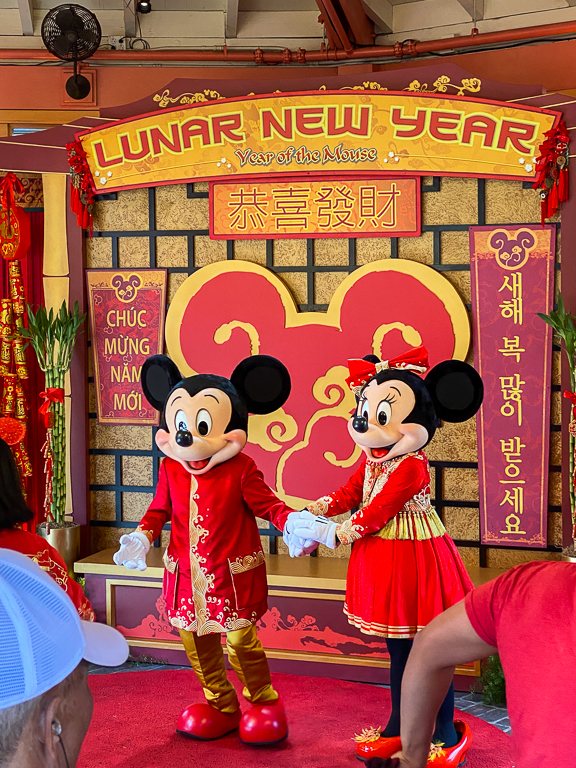 But, that's a really long line. Speaking with a cast member, it would be at least an hour to see them.
Instead the kids and the bears waved at Mickey and Minnie. I'm sure they were seen... 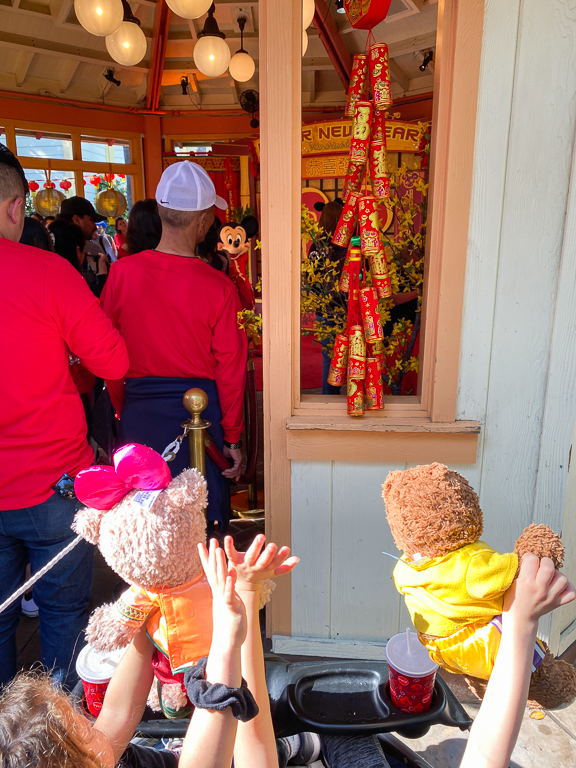 Maybe a picture in front of the big banner? Grr. Didn't turn out as well as I'd hoped. Good thing it's going on until Feb 9th. I'll have to attempt it again next time.

For her last trick, Theresa pulled a Guardians of the Galaxy fastpass out of her hat. I wonder if Brown Bear has ever ridden so many rides like this before. 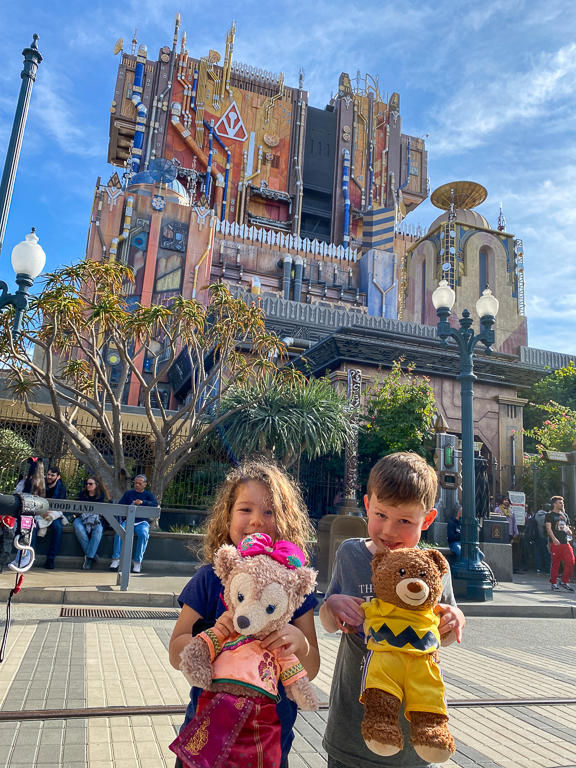 The kids got to meet a Vyloo at the entrance too. Usually we only see them in the Collector's lockup.
Unfortunately the fastpass return line was longer than we'd hoped. It stretched past the entrance, and even when you were inside the gates, had an extended queue. Alli remarked that she'd never been over to the part of the ride. She got her first look at the garden gnome. After minutes of not moving anywhere, the announcement came that a portion of the ride was down and that it was going to be an even longer wait. It's been a fun-filled day. Neither of the kids had their hearts set on going on this ride, so with their okay, we decided to call it a day. 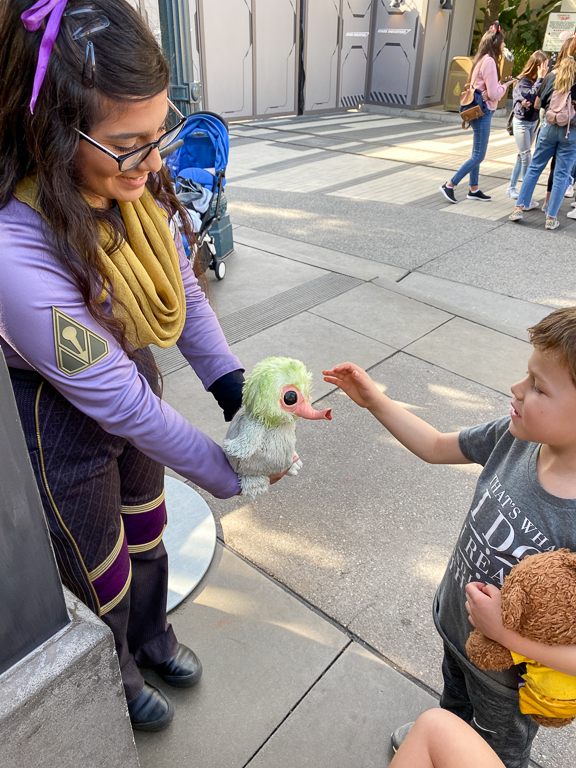 And to celebrate Lunar New Year, dinner was our favorite Korean restaurant. Looks like Brown Bear has had a wardrobe change. 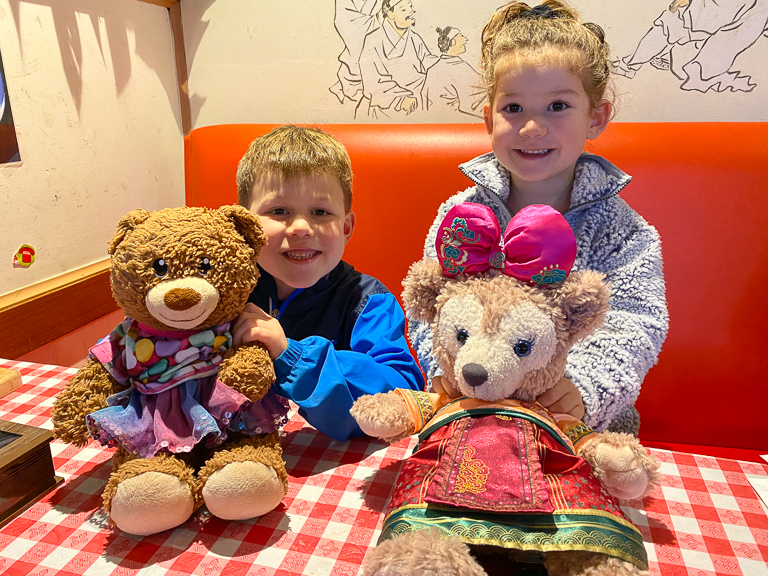 Mmm. Look at all that tasty food. 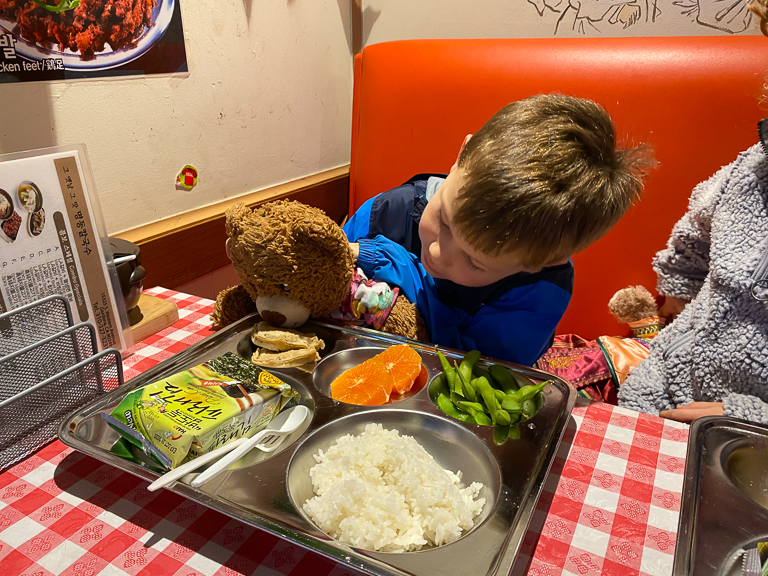 And to impress our Korean servers, and make other guests smile, the kids learned how to say "Happy New Year" in Korean.
새해 복 많이 받으세요 (saehae bok mani badeuseyo)
Which actually translates to "In New Year, may you receive many blessings." 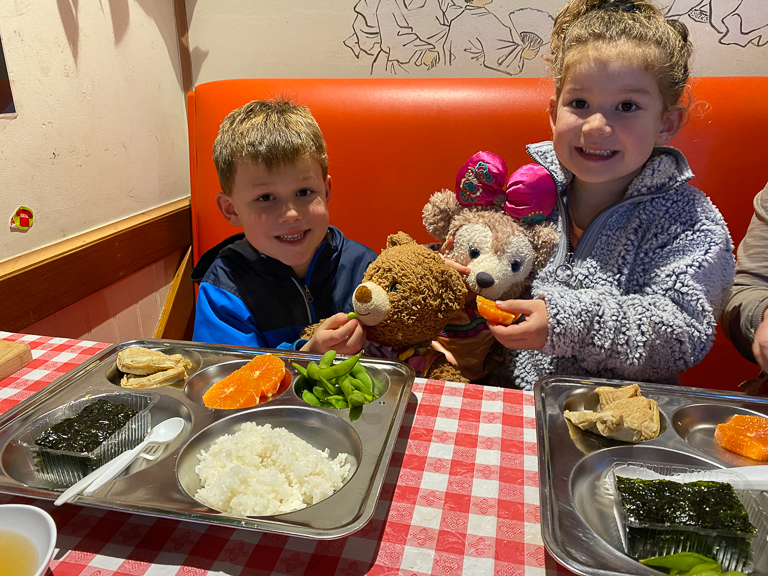