Sunday is Pizza day and we've got a fun one today! The idea for today's pizza came from Ian. He's been wanting to do this one since January, but we're just getting to it now.

I asked him to come up with his own unique pizza and he decided he wanted to do Soda Pizza! This is the day Ian! On the menu is Coca-Cola marinade ham, Coke-caramelized onions, on a pizza with a Coca-Cola syrup glaze. And also a Sprite pan-fried chicken, with garlic, on an alfredo sauce pizza, topped with lemon-lime zest, and a Sprite syrup glaze. 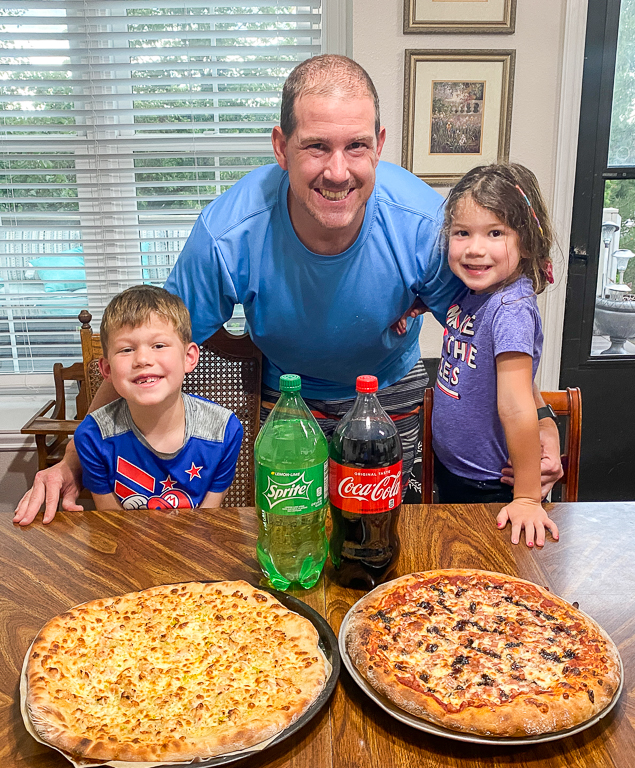 So, Soda Pizza. There's so many different soda possibilities, but we're going with 2 classics. Coca-Cola and Sprite.
With sodas figured out, now I need to decide what toppings are going on these pizzas. I want to keep the soda theme going.
What goes good with coke? I've had Coke glazed ham before and it was tasty. For the Coca-Cola pizza I'm going with a Coke marinated ham and Coke-caramelized onion pizza.
My cubed ham went into a bowl and then I covered it with Coke. It went into the fridge for 6 hours to marinade. 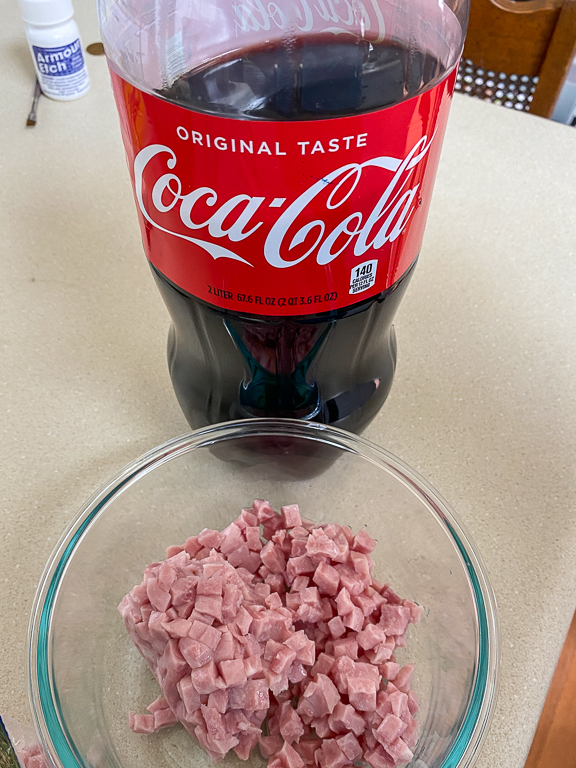 Caramelized onions take a while, so I got them started early in the day too. Just one whole onion, on low heat, a little oil, and then Coca-Cola poured in every once in a while. 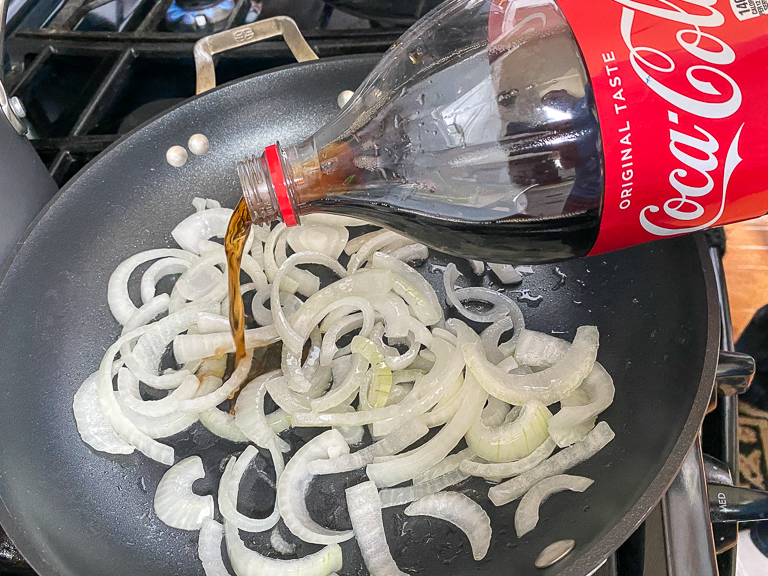 Ninety minutes later, they look like this. Just like caramelized onions with a little bit of a cola flavor. 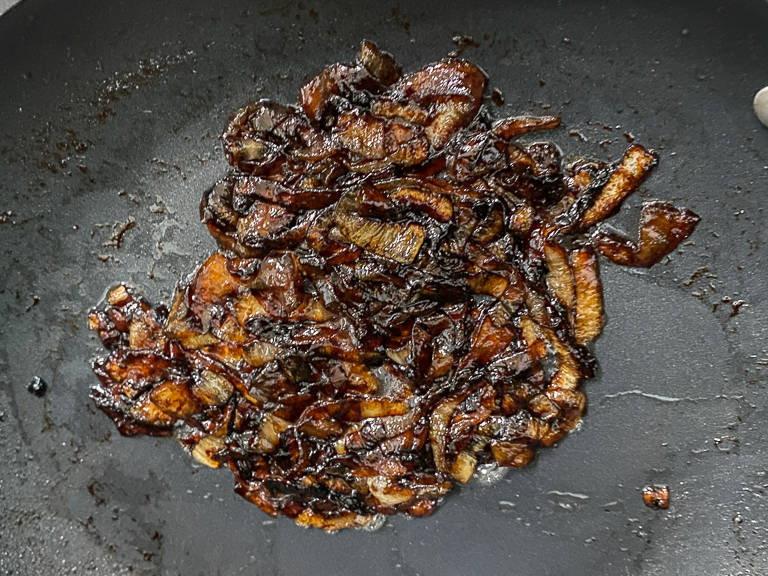 And the soda additions don't stop there. Instead of using water in the pizza dough, I'm swapping it with Coca Cola. Otherwise, everything else followed Joe's Favorite No Knead Pizza Crust Recipe. 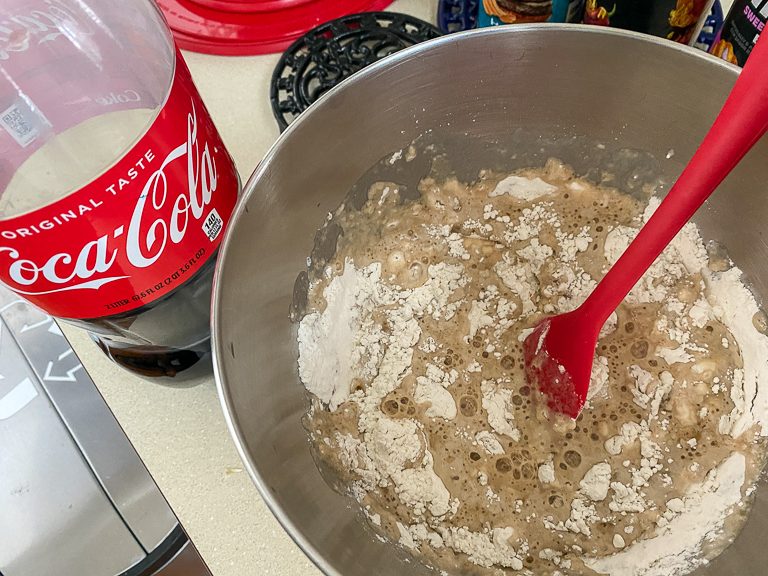 The result was a dough that looked a bit more brown than normal. Time to let it rise! 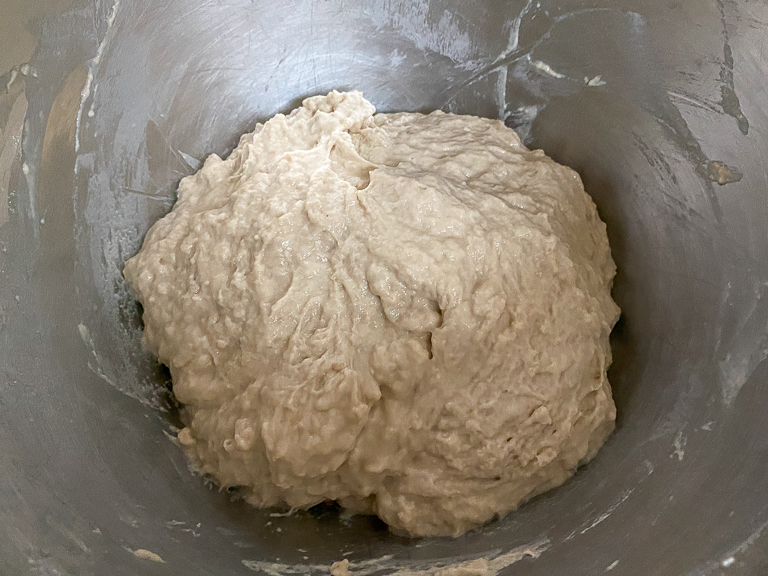 For the Sprite pizza, similarly, I substituted Sprite for the water. 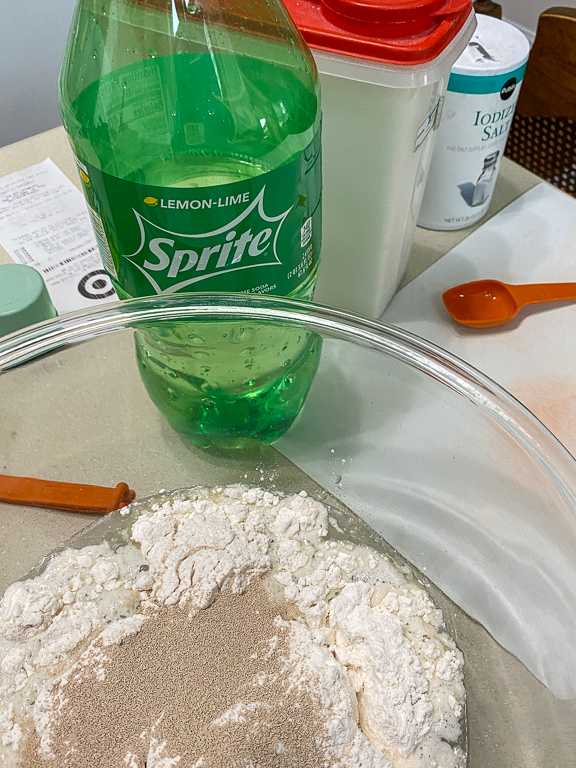 Time to put these pizzas together! First is the Coca-Cola pizza. It goes on a floured piece of parchment, just like normal. 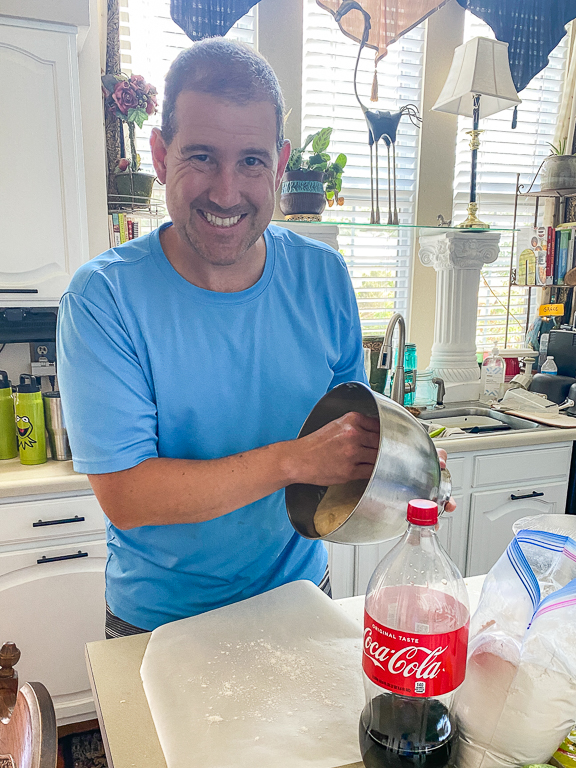 With floured hands, I press it out into a pizza round, making sure to leave an edge for the crust. 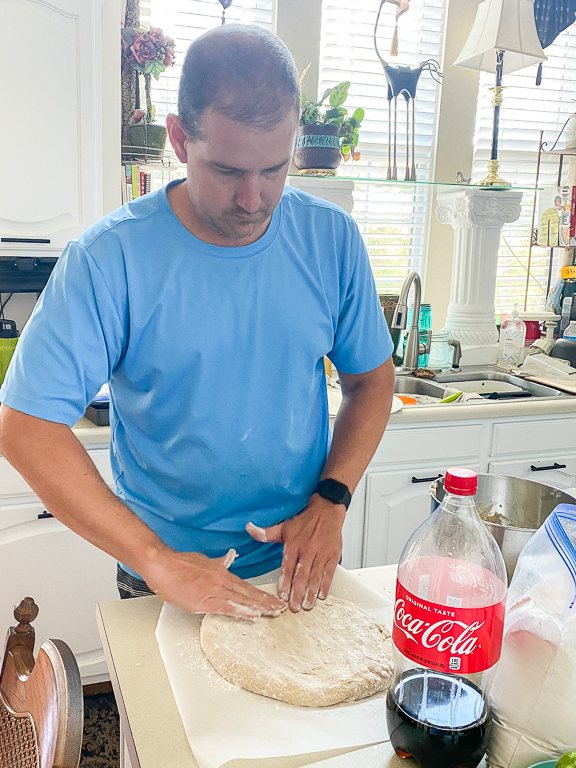 The marinated ham has taken on a bit of a darker color due to the Coca-Cola. I used a tomato sauce base, topped it with mozzarella cheese, and then the Coke ham, and Coke-caramelized onions. 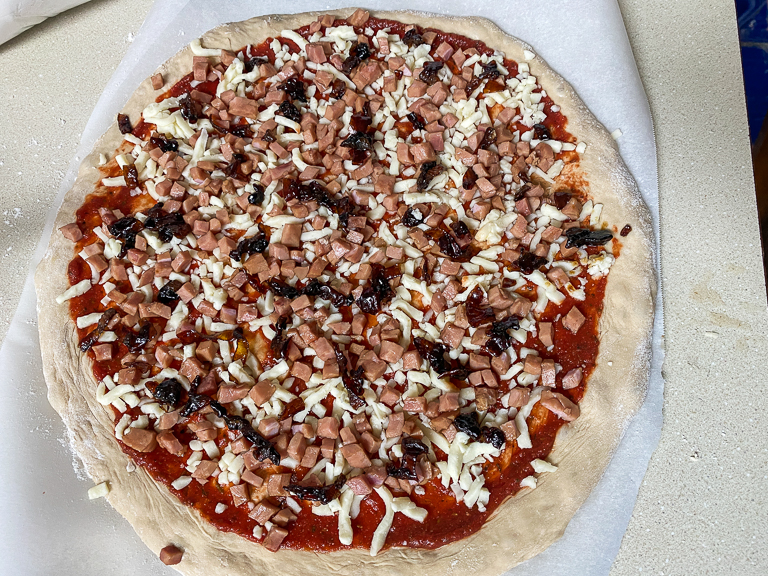 For the Sprite pizza, I wanted to go in a different direction than the Coca-Cola pizza. Instead of a tomato sauce base, I went with an Alfredo sauce base instead. I made up a half recipe of the Top Secret Recipes Olive Garden Alfredo Sauce Copycat. Along with the Alfredo Sauce, I'm topping it with Chicken Tenders that I pan-fried along with some Sprite. There's also a little bit of chopped garlic. 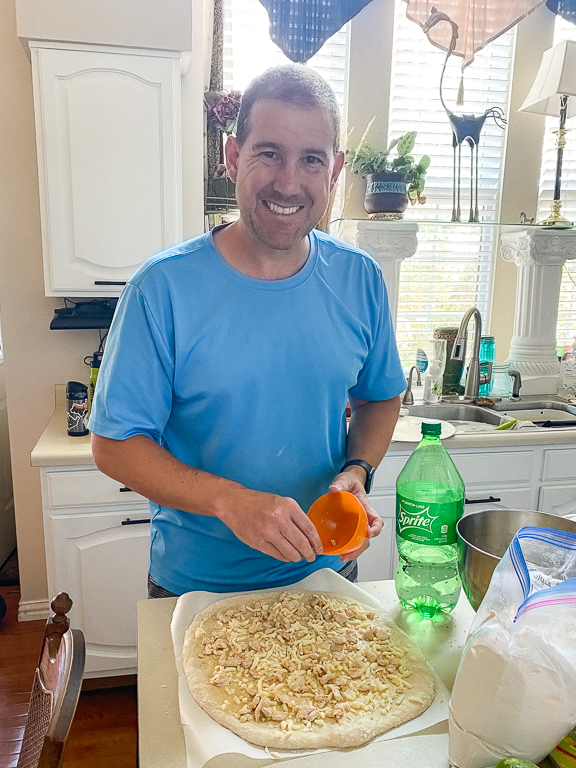 All ready for the oven! 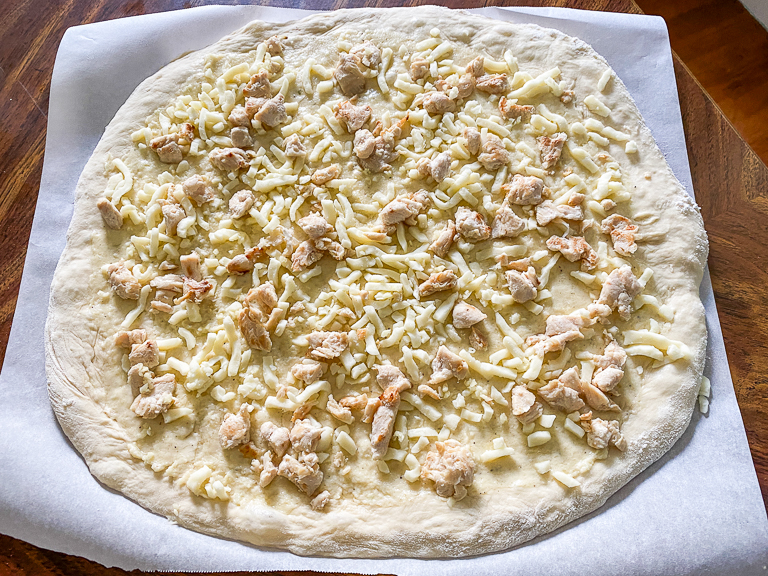 For the Sprite pizza, I'm going to add a little bit of Lemon and Lime zest on top to amp up that flavor! 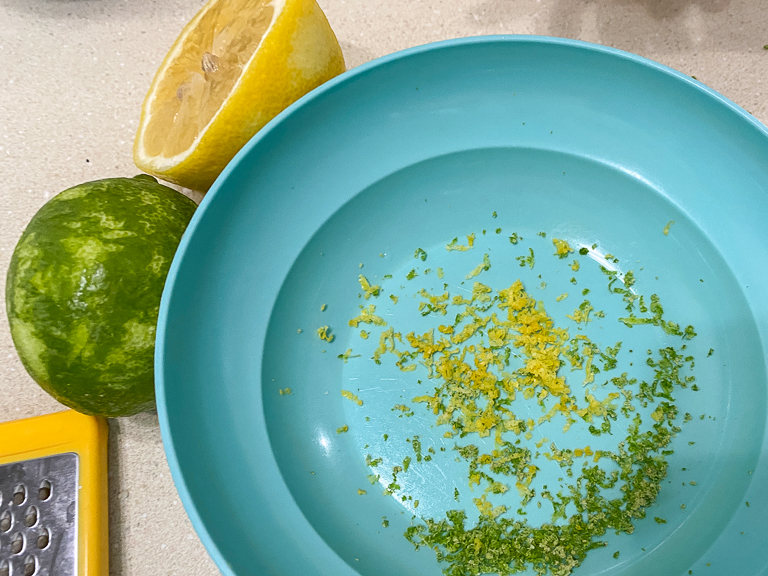 There's one more thing that I wanted to have to make sure the Soda flavor really comes through. I've done drizzles on pizzas before and I want to do something similar.
I poured 3 cups of Coca-Cola into a sauce-pan, and 3 cups of Sprite into another sauce-pan. That went onto the stove to boil off the extra water and reduce down to a syrup. 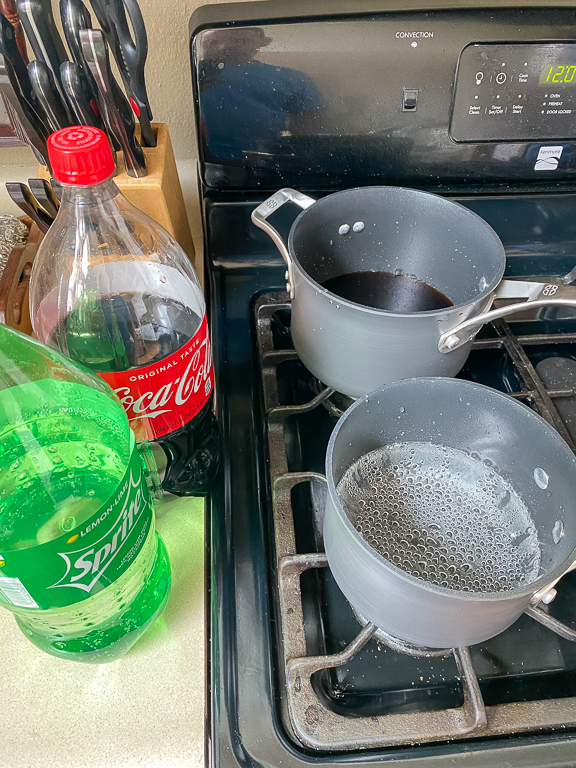 And since we're in the USA and using High Fructose Corn Syrup to sweeten these, I added 1/4 cup of sugar to the sodas boiling on the stove. 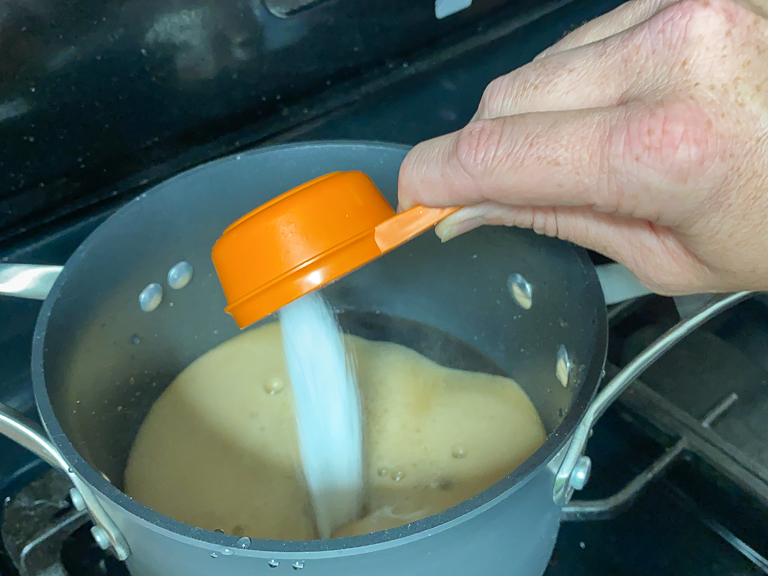 That 3 cups of soda and 1/4 cup of sugar, reduced down to about a half-cup of syrup. 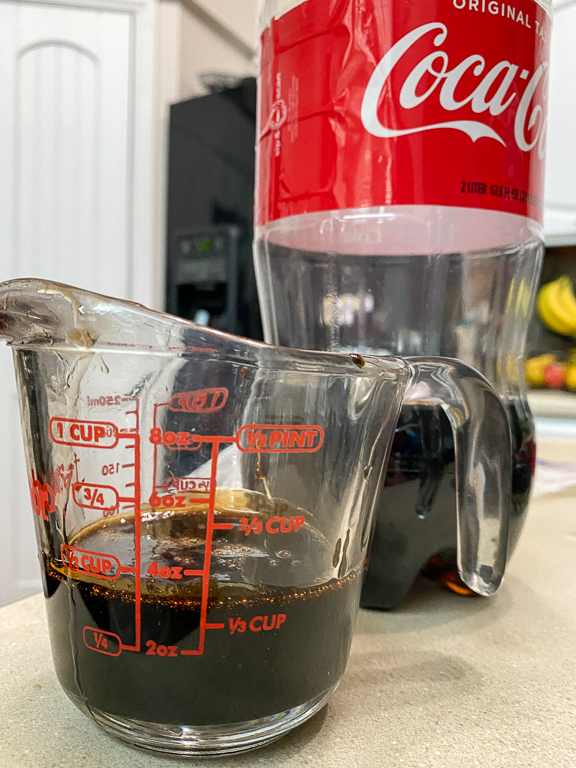 I could have added this over the entire pizza, but Theresa suggested I leave it to each person to add it for themselves. 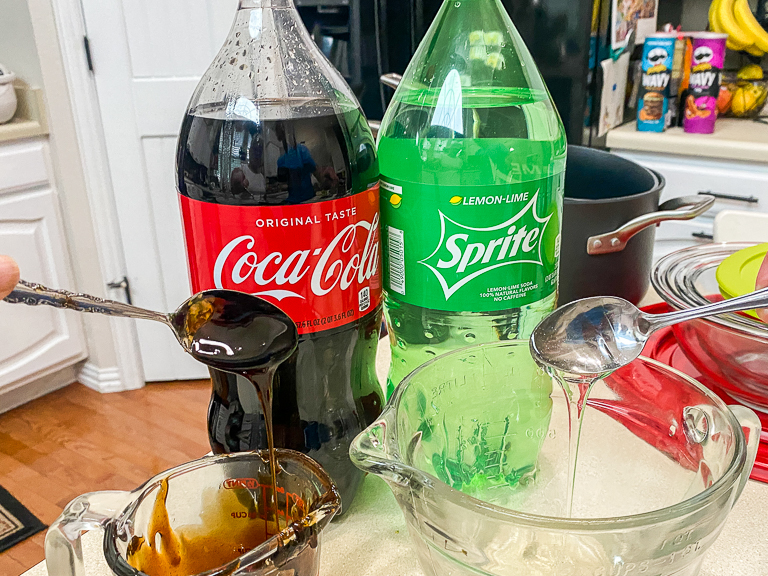 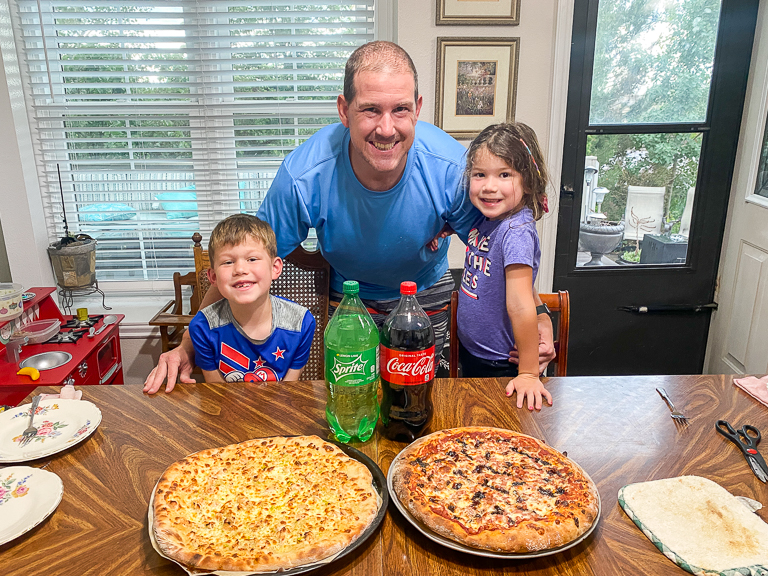 After fifteen minutes in the oven at 500F, this Coca-Cola pizza is ready! 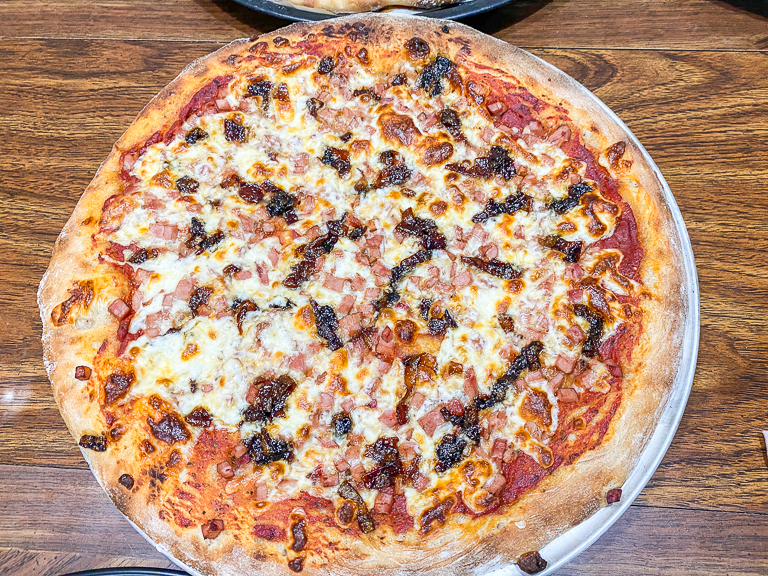 The Sprite pizza looks beautiful! That cheese browned up nicely. 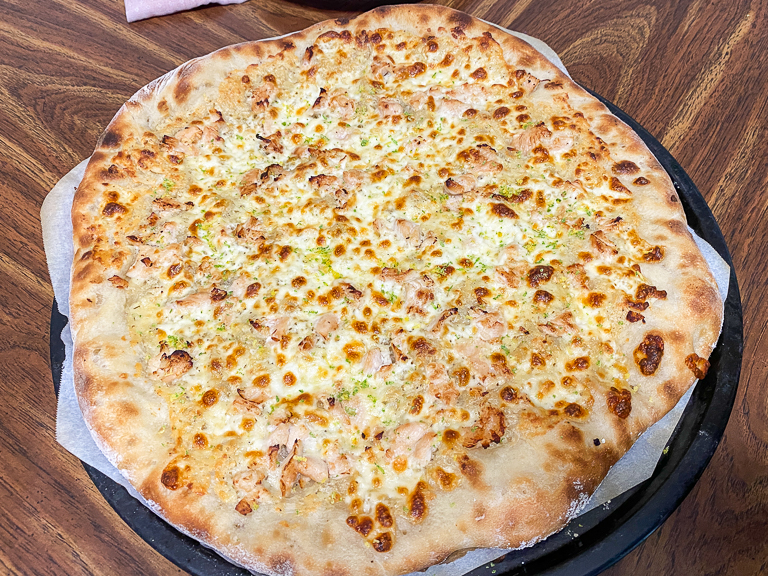 A closer look at that lemon and lime zest that is topping this Sprite pizza. 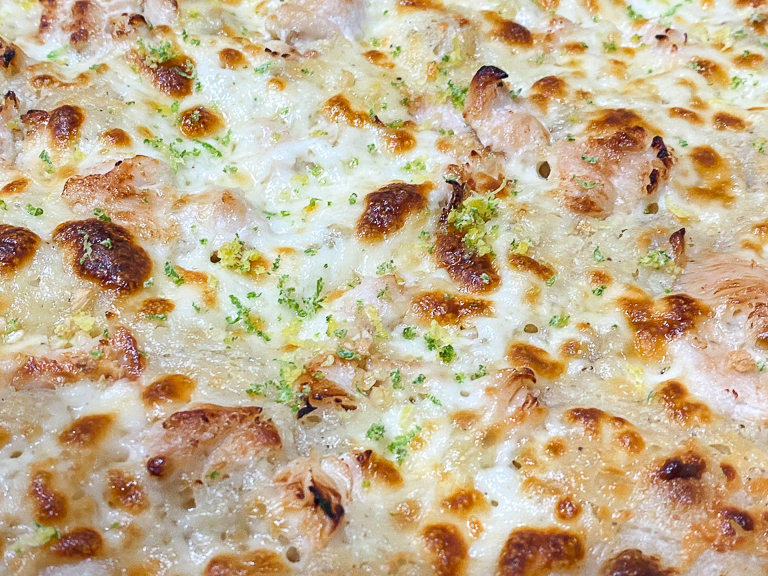 Time to dig in! Everyone at the table tried one of each. 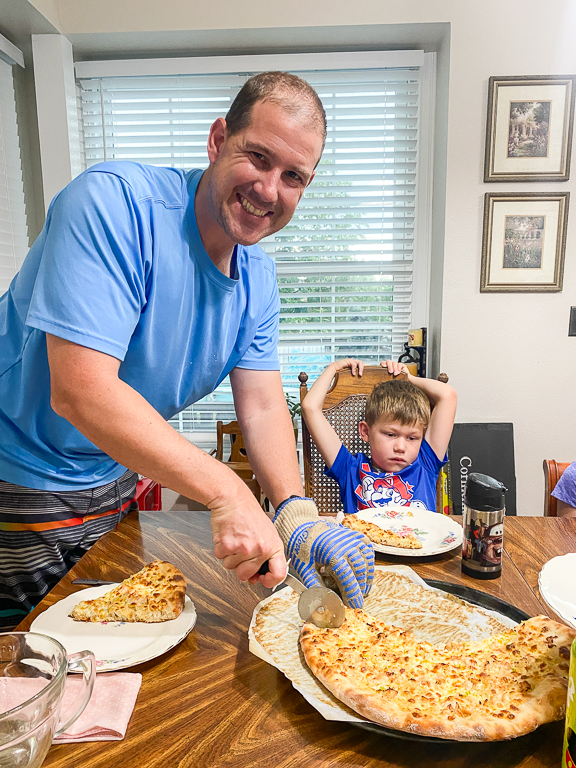 My plate tonight. You can see the Coca-Cola syrup drizzle pretty well. The Sprite syrup is there, but it's clear and a little difficult to see. 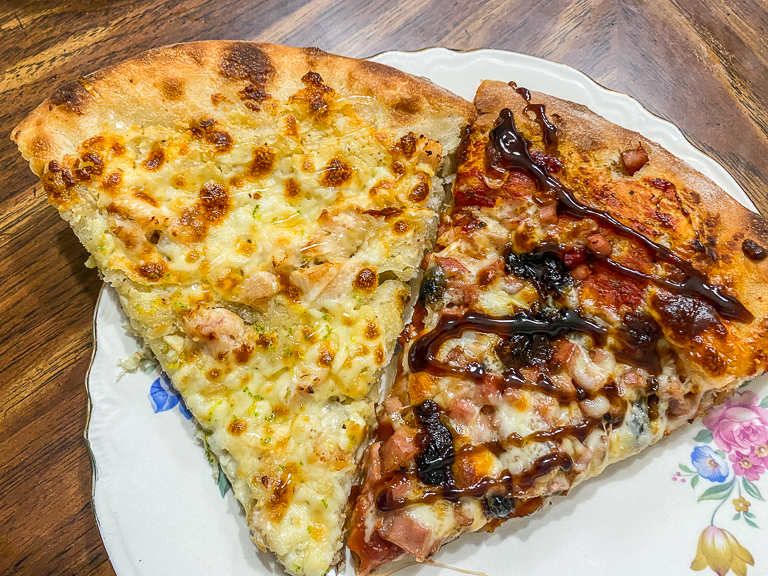 What's the verdict?
Well the good news is that Theresa said these were a whole lot better than she was expecting.
Actually the Sprite pizza was especially delicious, with everyone really enjoying it. That parmesan garlic flavor mixed with the fresh lemon and lime was really good! It was bright and refreshing. The Sprite syrup drizzle made it even more tasty. 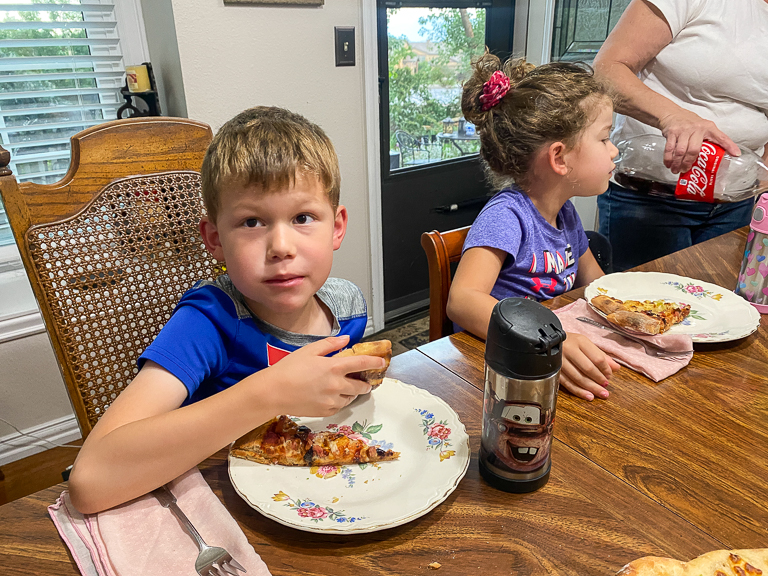 While the rest of the table agreed that the Sprite pizza was the best, Alli was the one outlier. Her favorite was the Coca-Cola pizza. Even with the Coca-Cola caramelized onions, the Coke marinated ham, and the Coke in the pizza dough, it was hard to find that cola flavor. It was necessary to add the Coke drizzle on top to make it a little stronger. Dad said it was almost like a balsamic glaze. I agree with Ian that the Coke drizzle was a little bitter and probably could have used more sugar. Maybe if I had used Mexican Coke it would have been a little more sweet.
This was a fun pizza week! Definitely something unique! 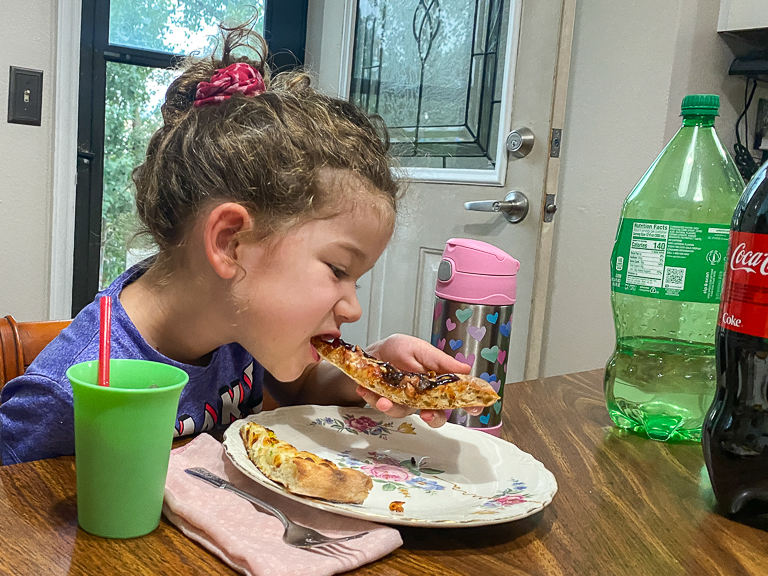 I did see that YouTube channel Food Theory did a Mountain Dew pizza about a month ago. Sorry I was late to do this Ian. I know you had the idea first!