Never one to pass up a new taste test, I saw these on the shelves of the grocery store and picked them up.
For me, Pop-Tarts are never something you have when you're eating breakfast at home. They're always something that's an out the door afterthought and usually raw. Now there's two new offerings. A Pop-Tarts cereal and new Pop-Tarts Bites. Both came in Frosted Strawberry and Brown Sugar Cinnamon, so of course we've got to get those regular Pop-Tarts to taste along with them. 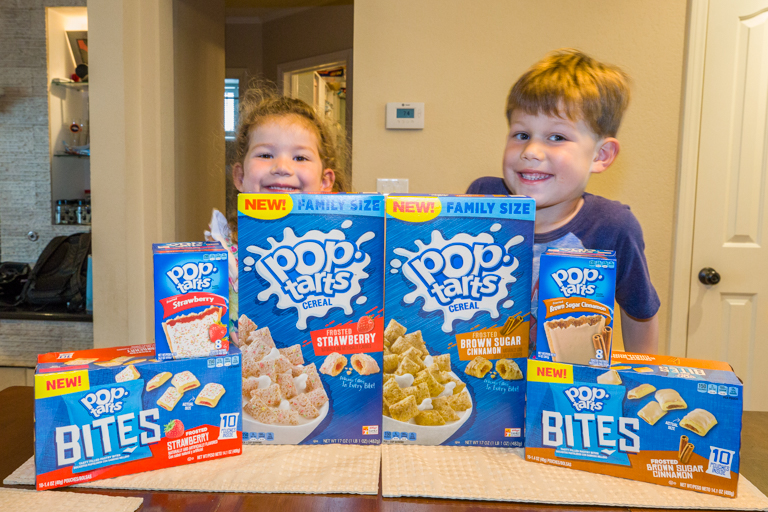 First up are the Brown Sugar Cinnamon items. 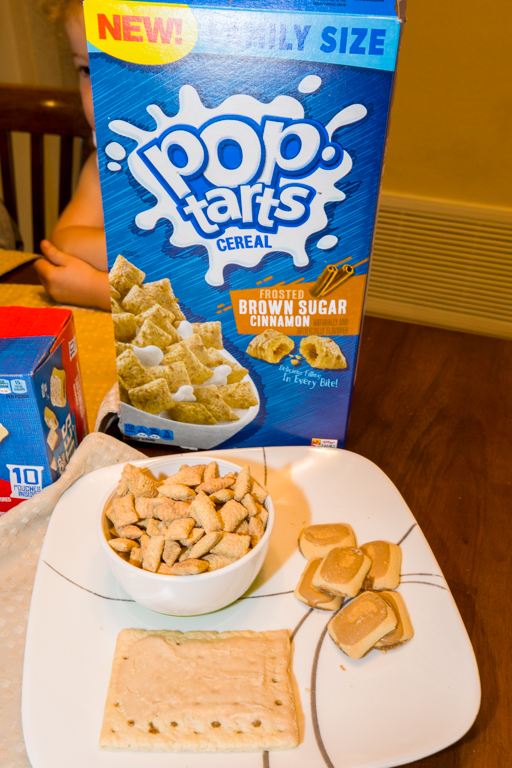 There's three items here, but there's four challengers. That's because for the regular Pop-Tarts there's two ways to eat them. Raw or Toasted. 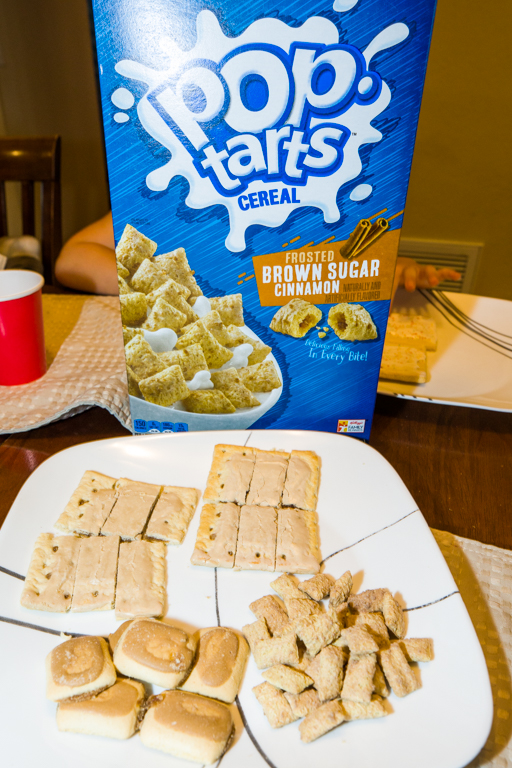 Here's the back of the cereal box. It promises to "Unleash ridiculous levels of Pop-Tarts flavor with Filling and Frosting in every bite!" 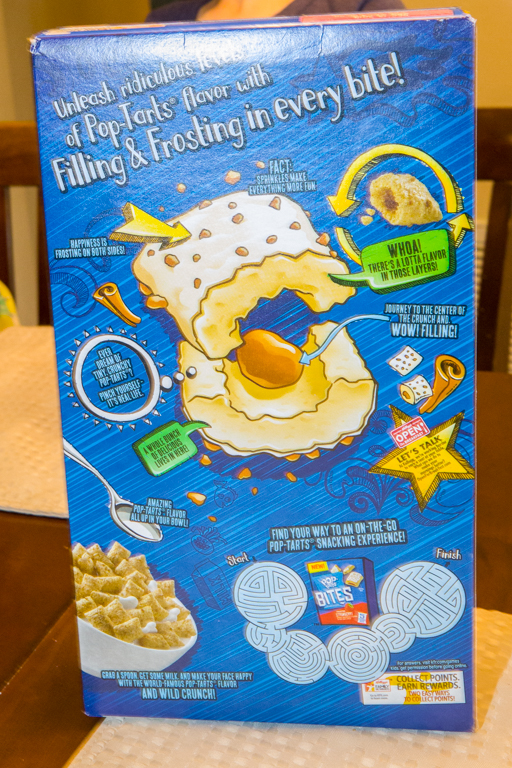 Upon opening the box of cereal, they certainly smell just like the Brown Sugar Pop-Tarts.
For Pop-Tarts Bites, they had a hard time getting the frosting to stick apparently. And it's much darker than the frosting on the regular pop-tarts. 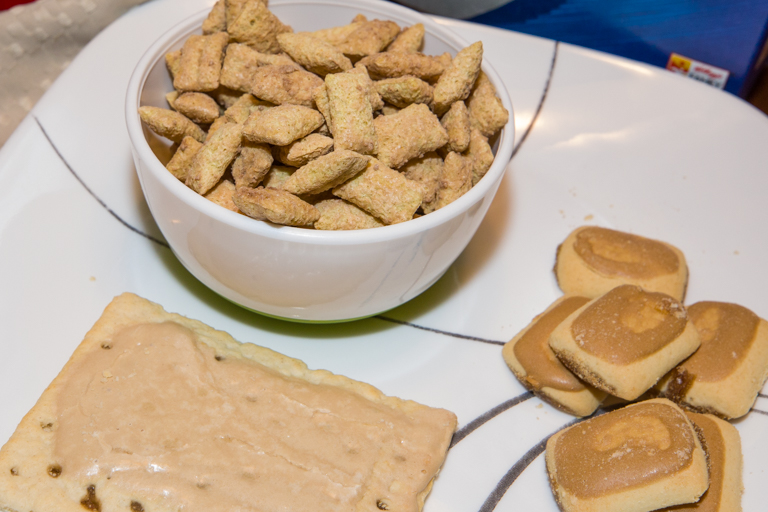 Time to taste them.
After eating one piece of cereal, both Jacob and Theresa were done. I thought they were exaggerating. I took a piece and... it was weird. The outside was crunchy, the inside was chewy. Almost gummy. The texture is pretty weird. A bit like a shredded wheat texture with a gummy center. And the taste for this one wasn't pleasing.
The Pop-Tarts Bites weren't bad. They were a little dry. The ratio of filling to bread was not very high, which is probably the issue. 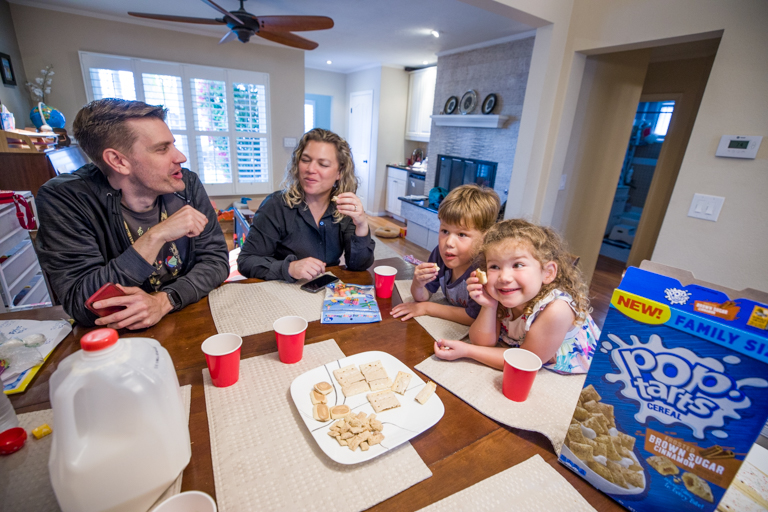 Let's move on to the Frosted Strawberry Pop-Tarts items. Once again we have the cereal, bites, and pop-tarts. 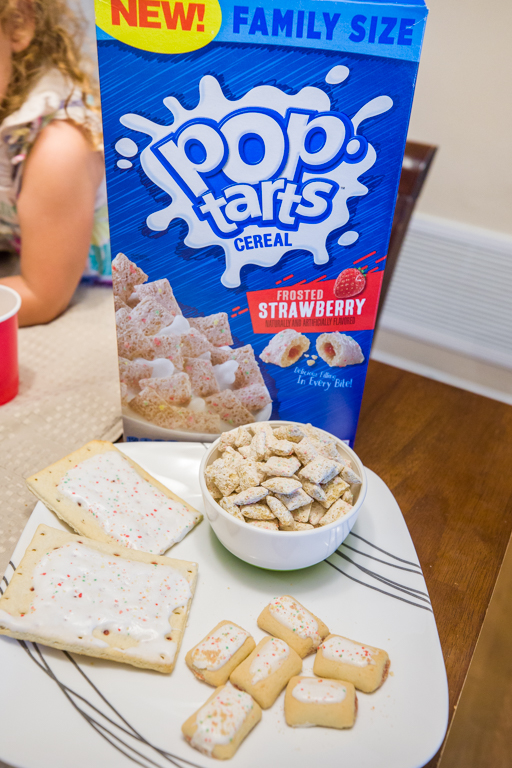 The back of this box is nearly identical to Brown Sugar box. 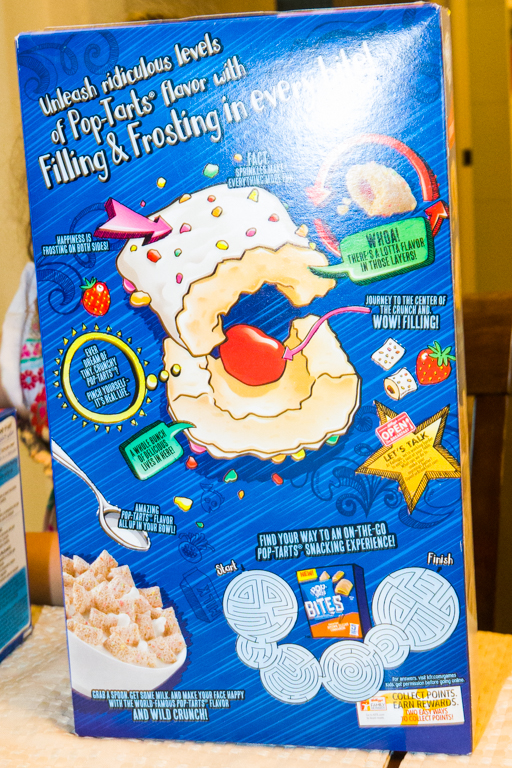 This cereal smells even more like the regular Pop-Tarts. They got the frosted strawberry smell down. 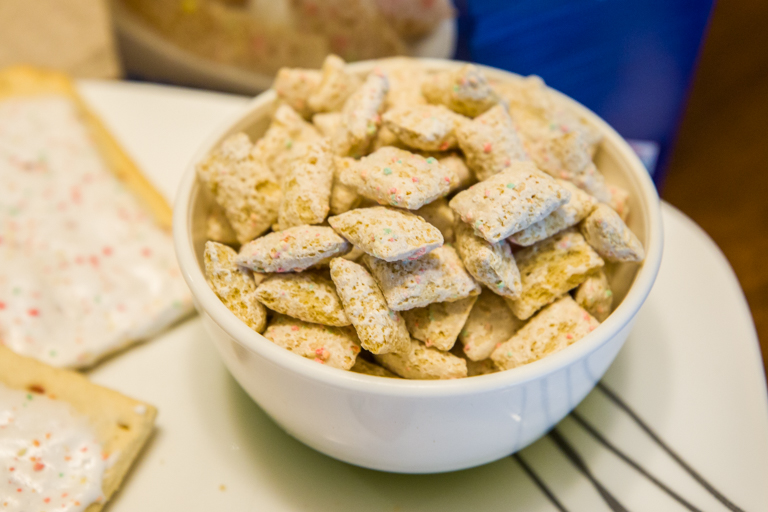 I was informed by Jacob and Theresa that I cut the first Pop-Tart poorly. This is apparently the proper way to cut a Pop-Tart. No crust. Just the tasty frosting. 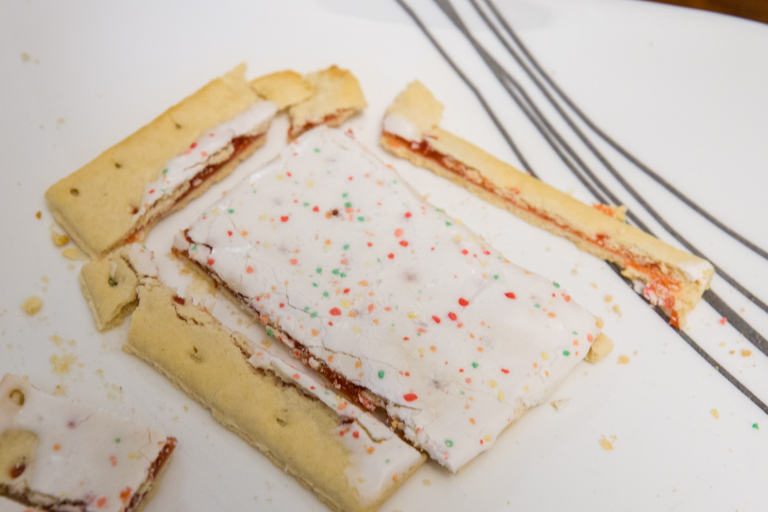 And here's a look at the Pop-Tarts Bites. A much better job this time covering them in frosting and sprinkles. They look very much like the Pop-Tarts they're meant to imitate. But, the same as before, they're a little dry. Jacob likened them to Pop-Tart Fig Newtons. An apt analogy. 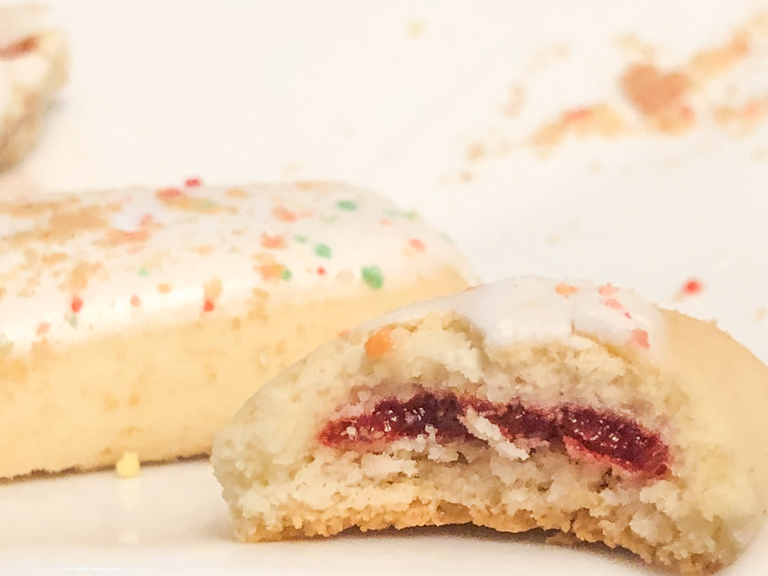 As for the cereal. Let's taste it. 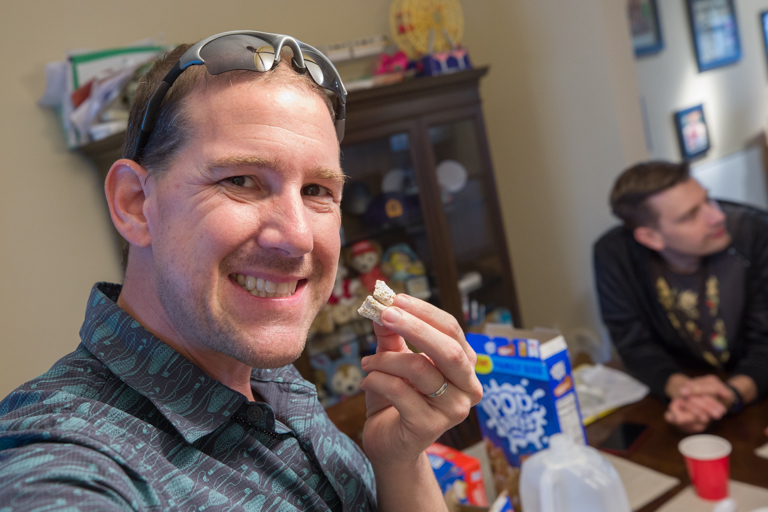 The flavor of this one is better. Not great. But better. But it's the texture that is still weird. After eating a few of these, my teeth felt like I'd been eating fruit snacks, with chewy bits stuck in my molars. Not what I'm looking for in a cereal. 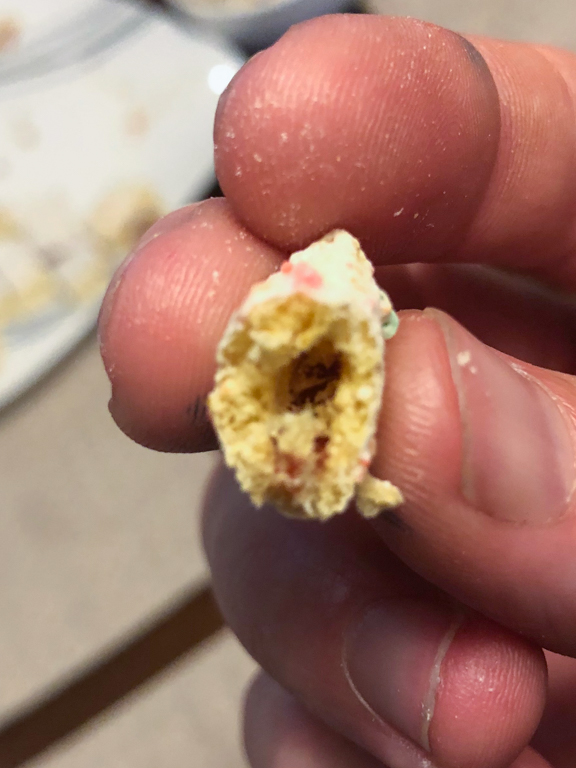 So even though the new things we tried out today weren't the best, it was still fun to taste new things. 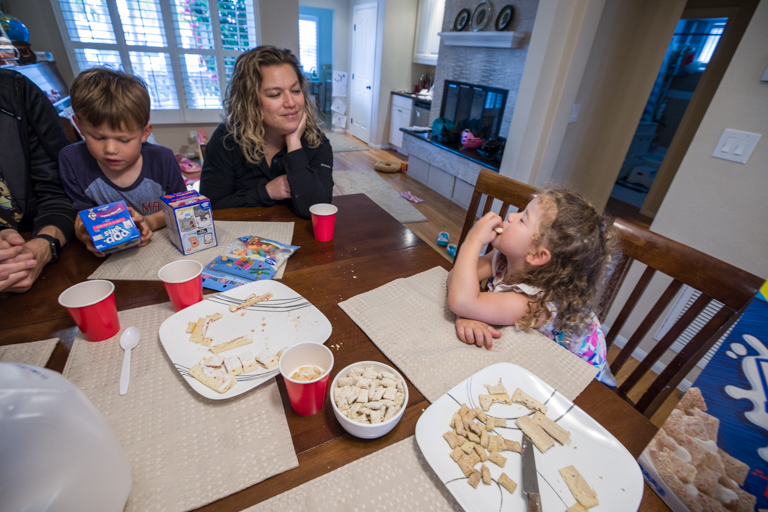 In the end, this is how everyone ranked what we tried.
1. Toasted Pop-Tarts - Is there anything better than a warm sweet pastry?
2. Raw Pop-Tarts - You don't always have time to heat up a Pop-Tart, so this is an acceptable substitute.
3. Pop-Tarts Bites - These were good. Not great, but good. I wouldn't go seeking them out or anything.
4. Pop-Tarts Cereal - There's weird good (I'm looking at you Sour Patch Kids Cereal) and there's weird bad. Unfortunately the Pop-Tarts cereal falls into the latter category.


So will you try any of the new items?
How do you feel about Raw Pop-Tarts versus Toasted Pop-Tarts?
Posted by Joe at 6:00 PM