Today we are in Arizona, so what better place to do a taste test for AriZona drinks!
And taste tests are always more fun when you do it with friends, so I was thrilled that Amy, Charlotte, Victoria, and Katherine were all able to join us for it! 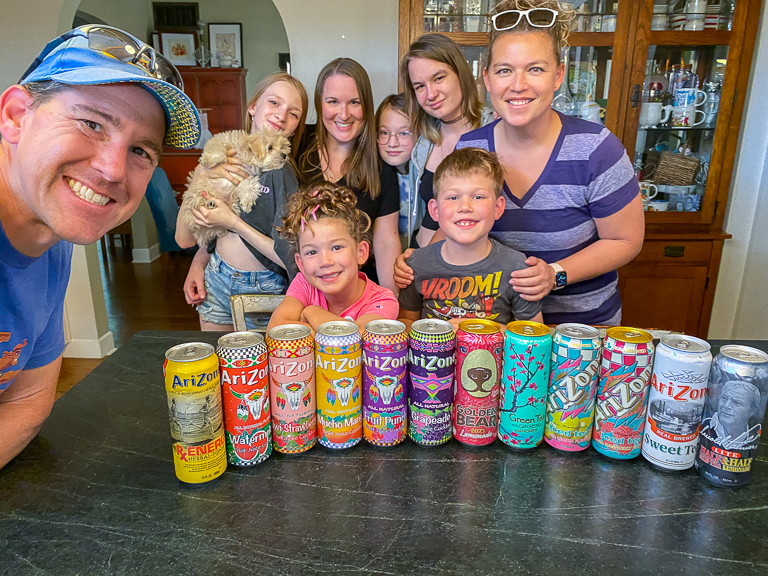 So I know that it says AriZona right on the can, but the company is and always has been a New York based company. The founders wanted to name it after some place that evoked heat, and the pastel colors of Arizona would look good on the cans too. They saw the success of Snapple, and in 1992 started the AriZona beverages company.

AriZona makes over 20+ flavors including diet, energy, and even cold brew teas. I was happy that I was able to find 12 different flavors in their giant 23 oz cans. AriZona prides itself on keeping prices down, at just 99 cents a can. Compare that to a 20 oz cold Mountain Dew that will usually sell for $2 at the same store.

All these have been in a fridge and covered with ice, so they'll be as cold as I can get them. I'm the official pourer today, giving out samples, many times to the cry of "not so much!" 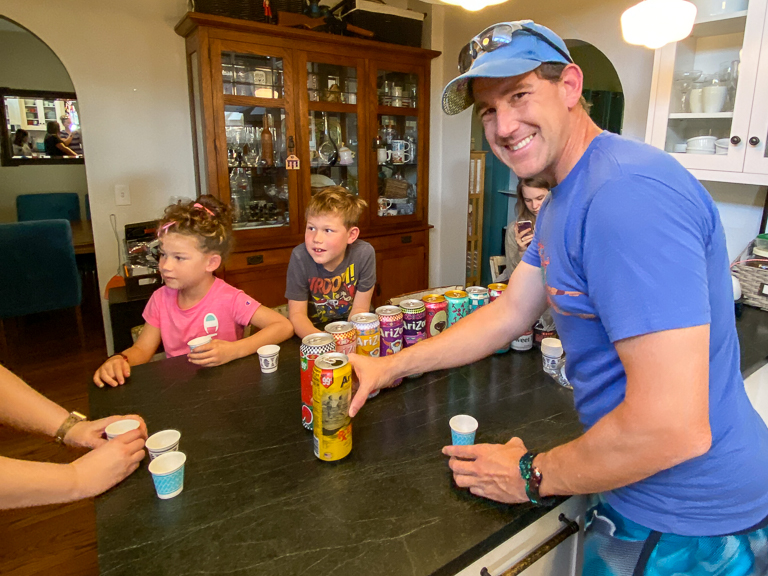 Our first contender in the taste test today is Arizona Rx Energy Herbal Tonic. Wow, with a name like that it sounds like a health drink. The can says that it includes green tea, tropical and citrus fruits, Panex Ginseng (another word for Asian Ginseng), Guarana, Schisandra, and vitamins. 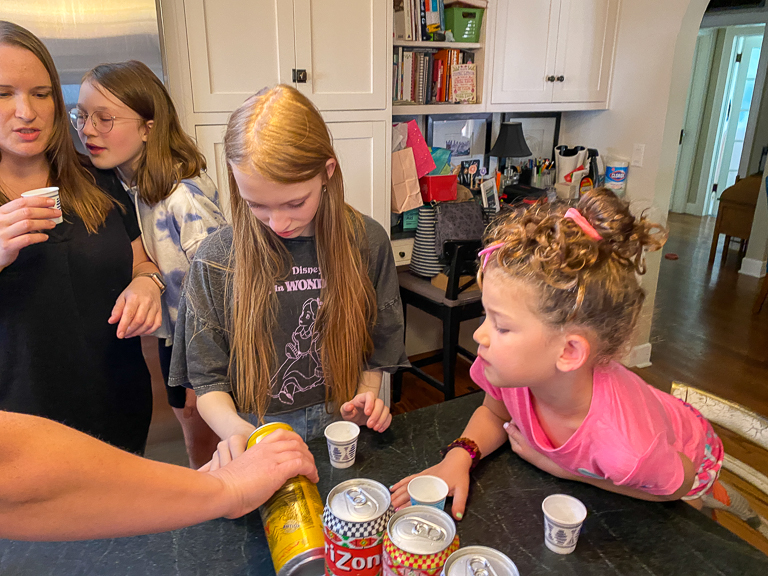 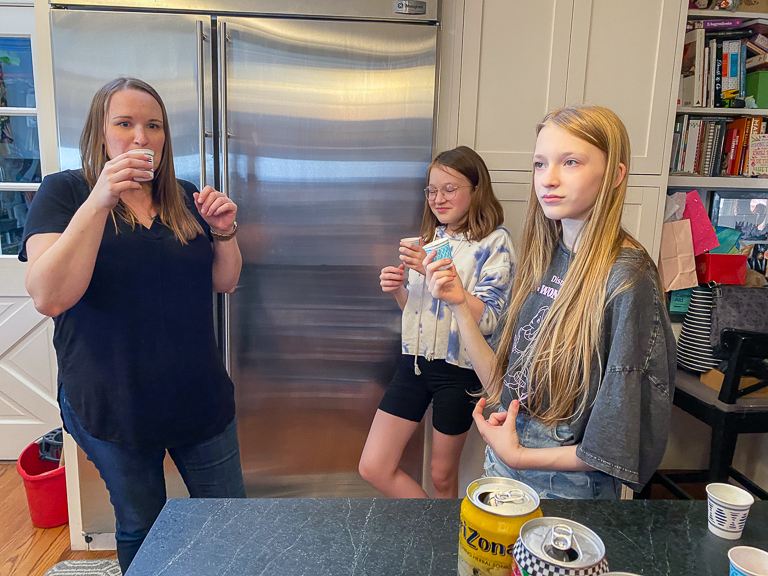 Rx Energy Herbal Tonic
Amy - That almost smells like Hi-C Orange drink.
Theresa - That is way better than I thought it would.
Ian - That is so good!
Joe - I almost expect it to be carbonated, but none of these are huh.
Alli - No thank you.
Theresa - It has a weird aftertaste. I thought it would be my worst, but I don't know.
Amy - I don't hate it. I don't feel like it's herbal. It's fine. I was prepared for medicine. 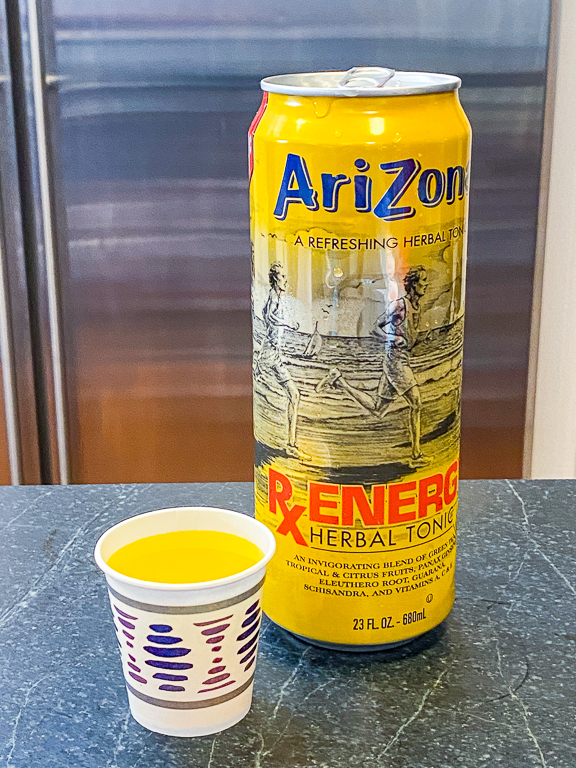 Watermelon Fruit Juice Cocktail
Ian - I hope this one is cool and refreshing.
Charlotte - It tastes like watermelon juice.
Theresa - I wouldn't have guessed the flavor is watermelon.
Alli - It tastes delicious.
Joe - So... the first ingredient is pear juice, then mango, pineapple, kiwi, and finally watermelon.
Amy - It taste like generic juice box from the 90s.
Theresa - YES! Exactly!
Amy - Like a Capri-Sun! 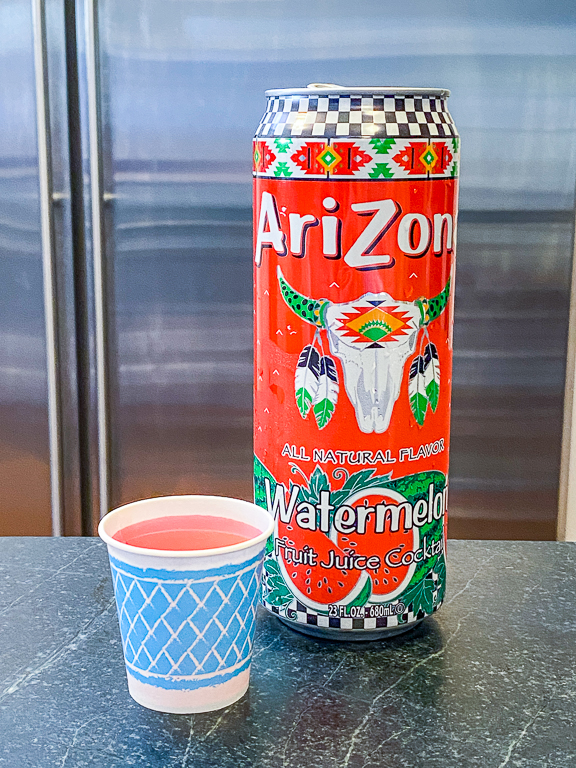 Kiwi Strawberry Fruit Juice Cocktail
Ian - Yes!
Amy - I'm predicting Snapple vibes.
Ian - It has a weird smell.
Theresa - Kind-of a bad smell.
Alli - This tastes horrible.
Tori - Like schoolboy sweat.
Joe - Really? That's going to make it into the review.
Amy - It doesn't have much flavor.
Theresa - Maybe for being such a big can, you don't want it to have a lot of flavor if you're going to drink it all. 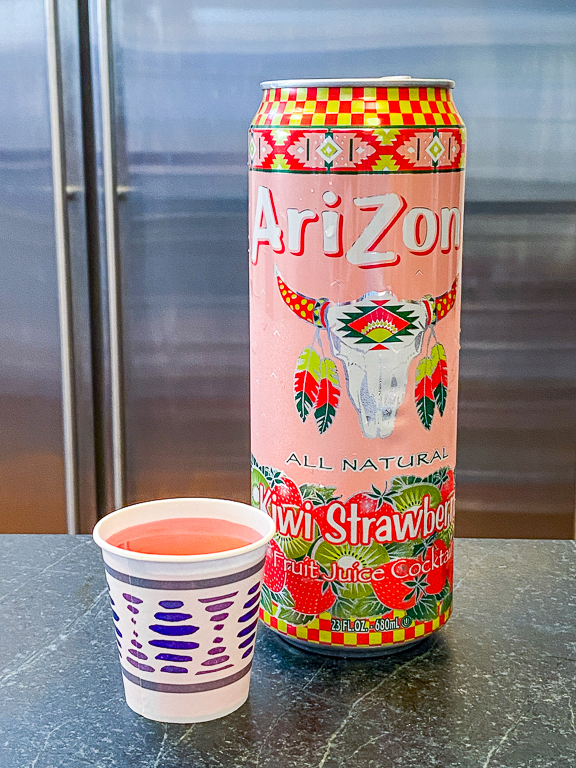 Mucho Mango Fruit Juice Cocktail
Joe - Not just a little mango. Mucho mango!
Theresa - Definitely a mango fruit cocktail.
Charlotte - It taste less flavorful than the others.
Joe - All of these so far don't have a lot of flavor.
Amy - They taste like a fancy water.
Ian - It's refreshing.
Alli - Can I dump this out?
Amy - If this was a blind taste test, I don't know if I'd be able to tell you what they are. 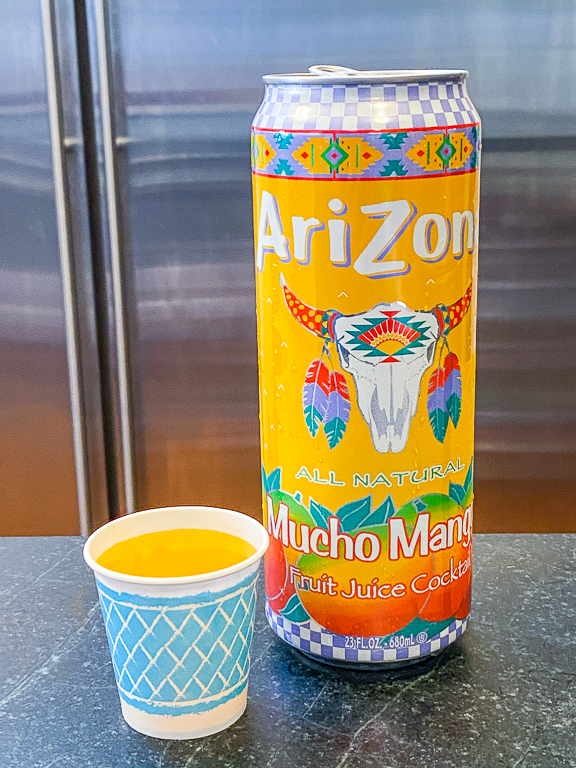 Fruit Punch Fruit Juice Cocktail
Joe - I'm not a Fruit Punch fan in the first place, so we'll see how this goes.
Ian - Not bad. Not good.
Amy - Fruit punch. Like at the church social when it's real watered down.
Joe - Amy, I love your descriptions. You're totally right.
Charlotte - I like these so far.
Theresa - For all these, I don't love them, but if it's hot outside and you gave me one of these cold, I would drink it. 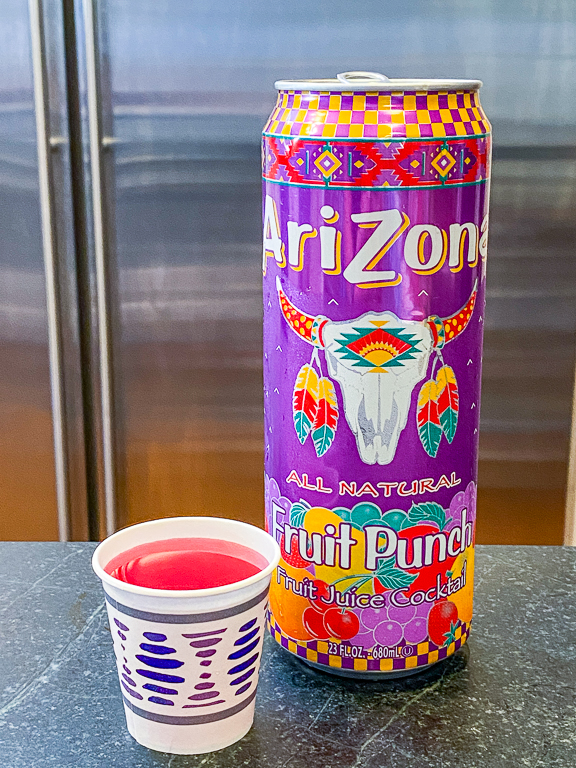 Grapeade Fruit Juice Cocktail
Joe - If I could pick any of these by name alone, I would probably pick grape. My usual favorites are grape and strawberry.
Theresa - Let's see if it meets your expectations.
Charlotte - I have had a grape popsicle that tasted like this.
Amy - It's like grape kool-ade but also with dirt.
Theresa - I don't quite get the dirt, but it's not good.
Ian - Yuck! Can you pour this out for me?
Amy - I'm pouring mine out too Ian. I'm right there with you. 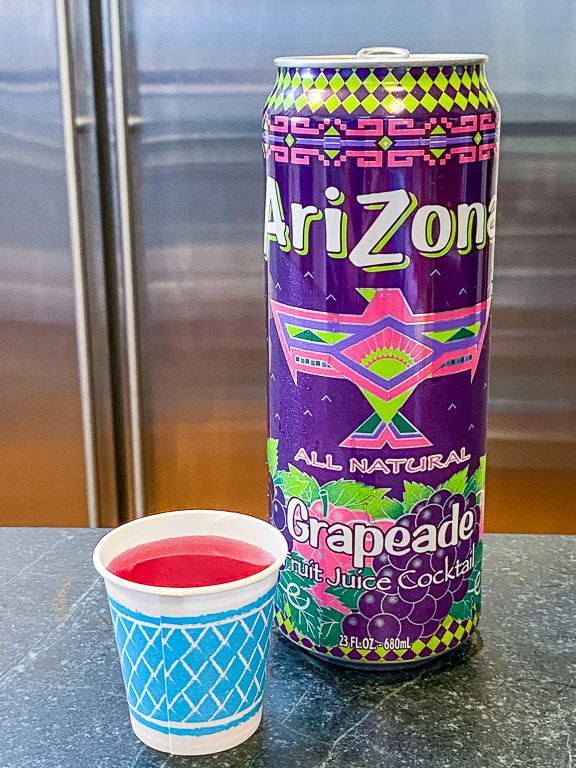 Yeah, pretty much that. 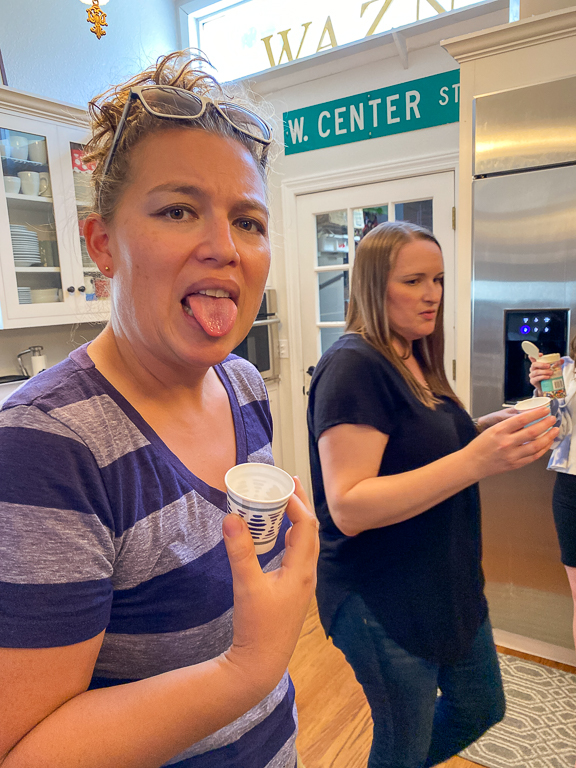 Golden Bear Strawberry Lemonade
Joe - This would have been my second pick, just from the label.
Tori - It tastes like strawberry lemonade that's not lemonadey enough.
Amy - It's very strawberry heavy. I don't hate it.
Katherine - It's like when I first started drinking Monsters and I had to water it down with lemonade. 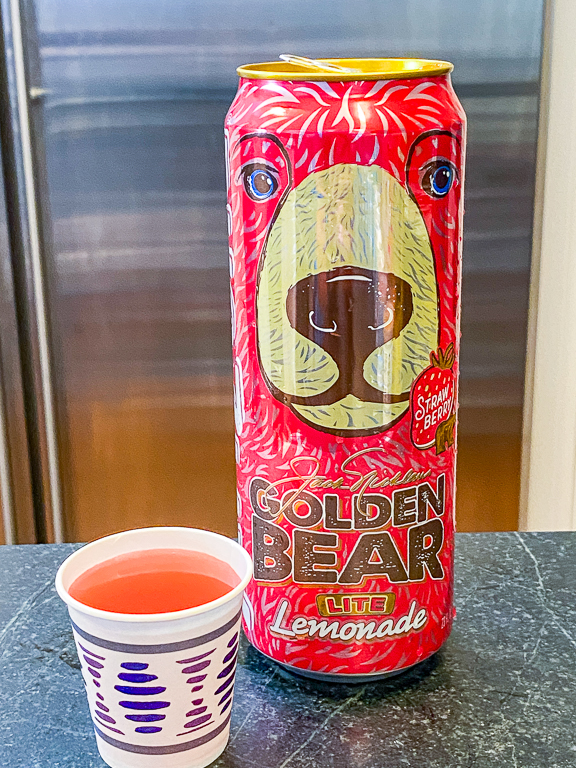 Green Tea with Ginseng and Honey
Amy - This is probably going to be one of my favorites.
Ian - Yum! That's a sweet tea. 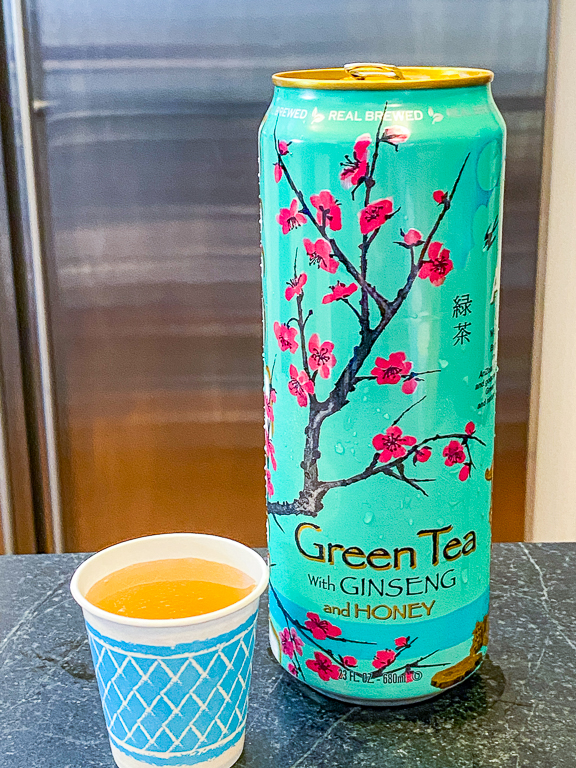 Their new puppy was interested in seeing what was going on. 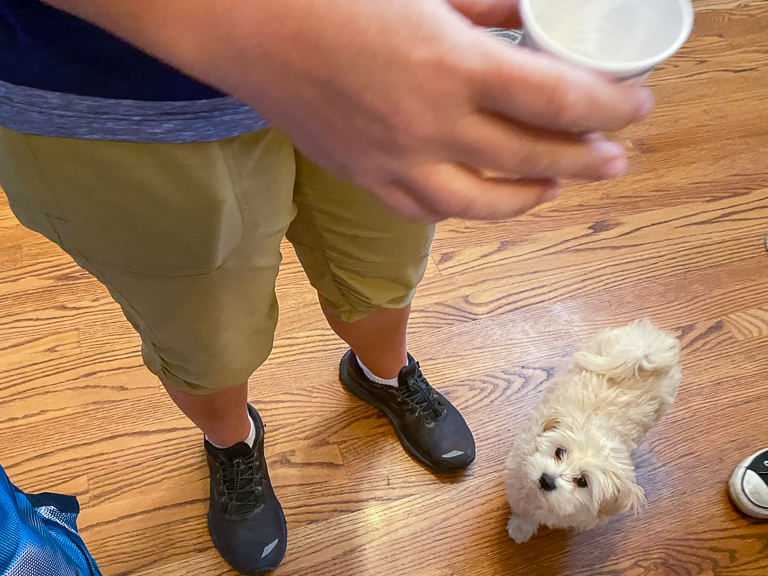 Iced Tea with Lemon flavor
Ian - Not good. I'm just going to set it down there.
Joe - It's what I expect.
Theresa - It's almost like an astringent aftertaste. Like when I have a persimmon in my mouth. 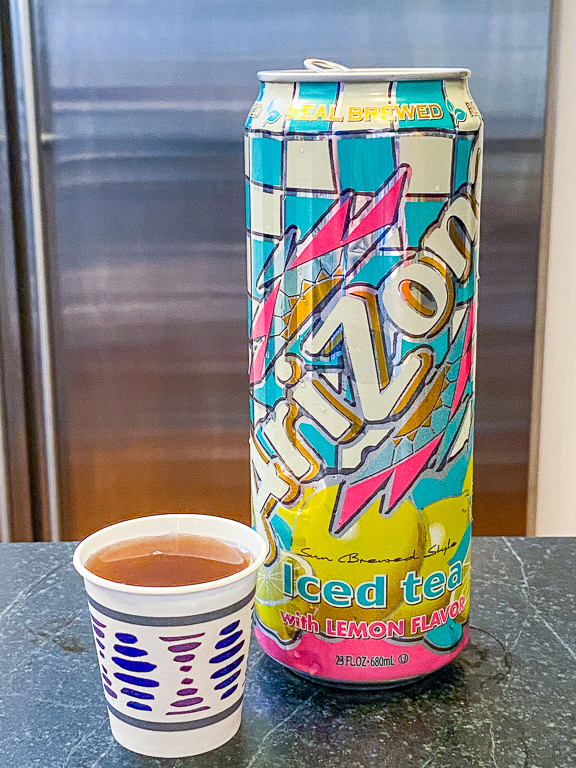 Iced Tea with Raspberry flavor
Ian - Give me only a little bit!
Alli - Just a tiny tad!
Joe - I thought you like tea!
Alli - Not these.
Amy - This was all I drank the first summer I was here.
Ian - Not. So. Good. 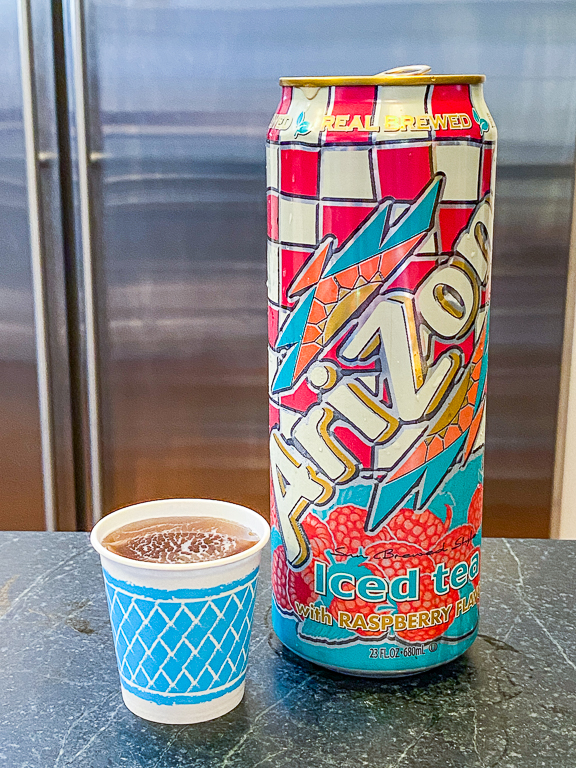 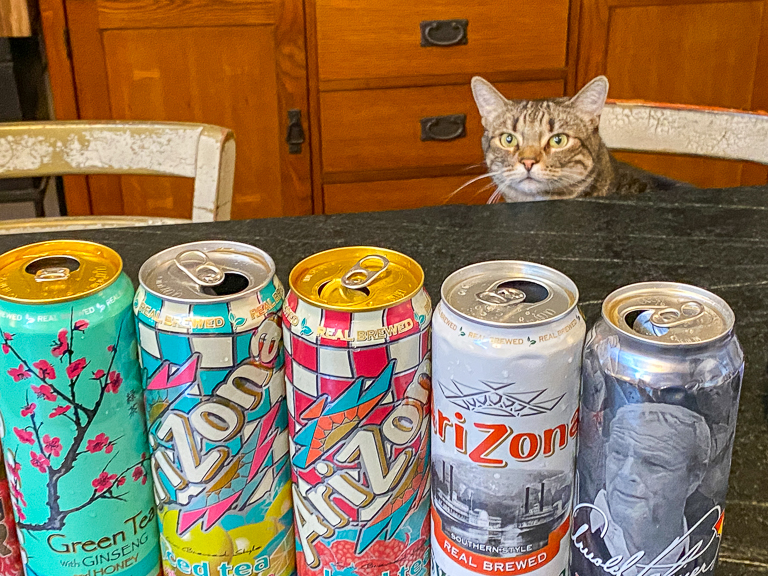 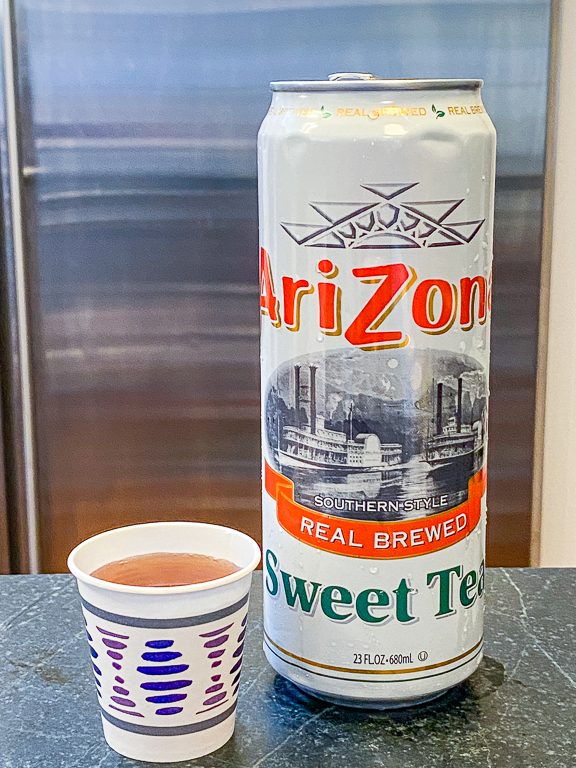 Arnold Palmer Half Iced Tea & Half Lemonade
Theresa - That tastes quite a bit like the iced tea with lemon.
Ian - Dump it out. It's not good. 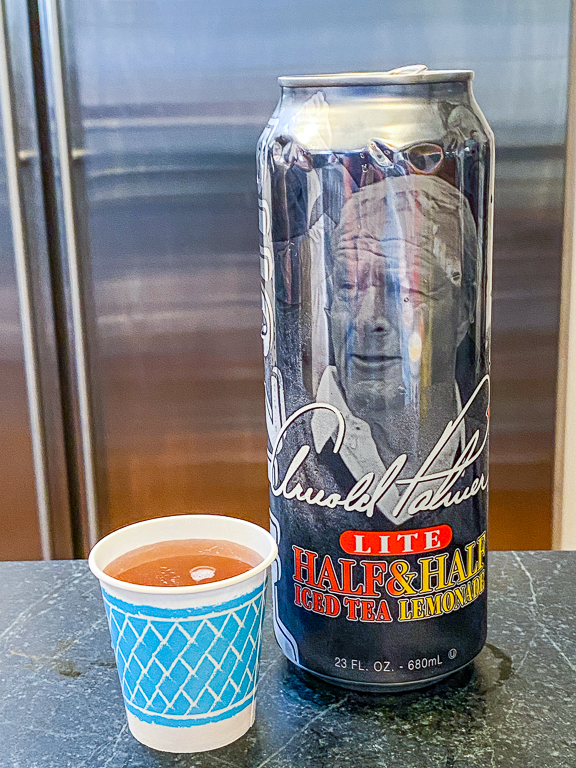 Theresa - If you had to drink a whole can of something, which would you pick?
Amy - I wouldn't choose any of those fruits.
Joe - Those cans are a lot. And you can't reseal it.
Theresa - I'm not a fruit juice cocktail fan either.
Amy - I was surprised by the herbal energy one. It was not offensive. I was prepared for it to be terrible.
Theresa - All of these drinks were ok-ish. None that I would buy. Probably one of my first and last AriZona cans. 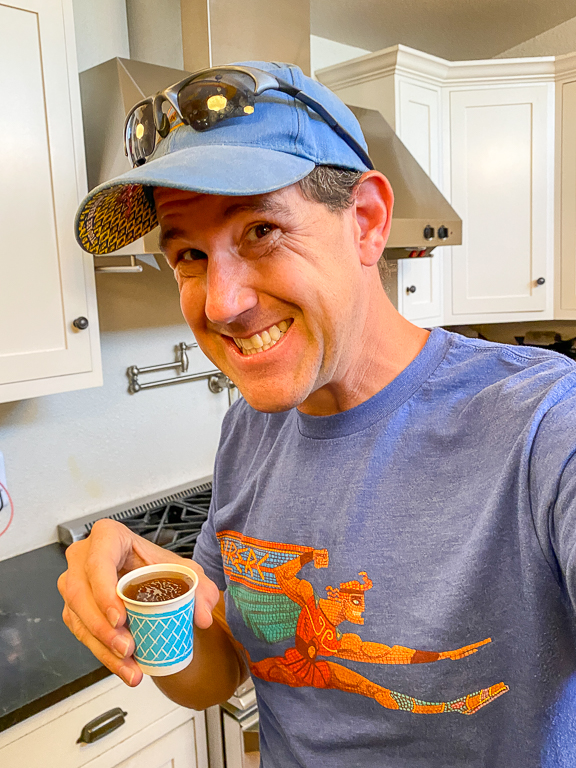 What about favorites? Does anyone have any? Or at least can you pick one you dislike least.
Alli - Sweet tea
Ian - Energy Drink 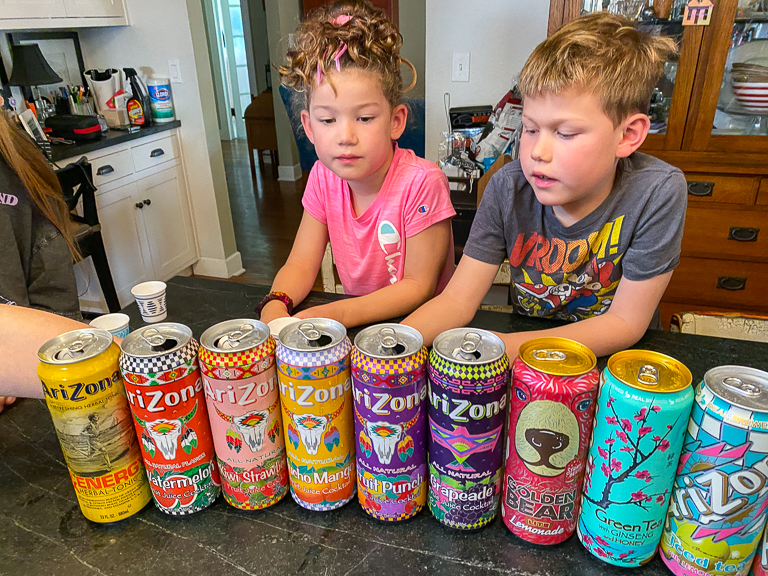 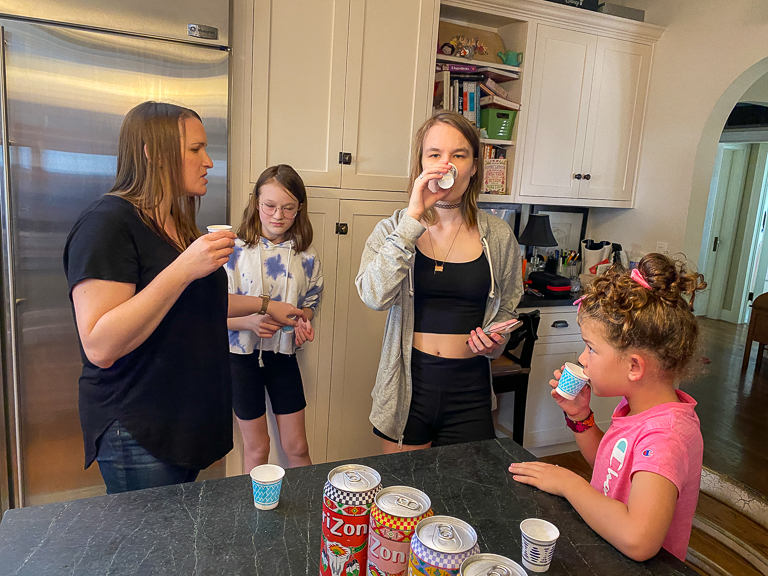 Well these weren't our favorite drinks. Amy's comment of Capri-Sun for grown-ups held true for pretty much all of them. Theresa mentioned the Donald Duck fruit juice cocktails we tried a while ago. I don't think they're quite as bad as that, but they're not that great either. 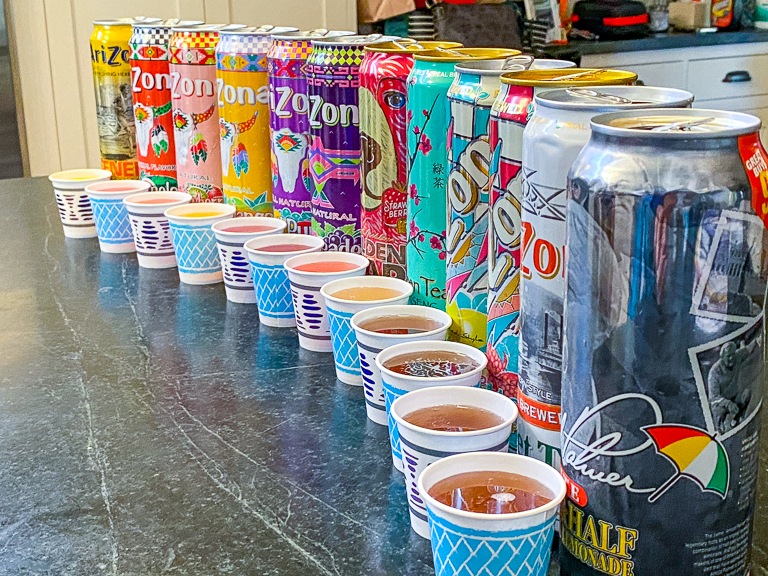